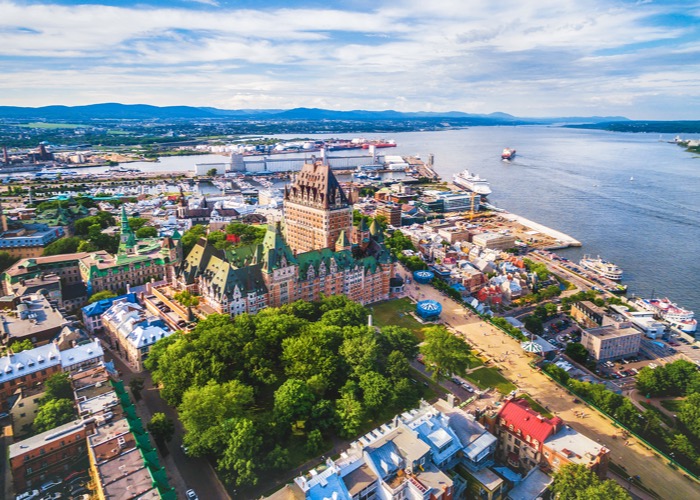 Riverside views, a textured history and one of the world’s most famous hotels – there’s a lot to discover in Québec’s capital.

With a neat historic core and watery vistas at every turn, Canada's Québec City is a joy to explore on foot. On a trip, you’ll come face to face with the country’s oldest church, sip craft beer in decades-old breweries and strike out to see waterfalls and valleys in the city’s backyard.

You don’t need to be fluent in French, though locals appreciate visitors making efforts to acknowledge the region’s francophone heritage. Here’s a look at top things to do in and around Québec City.

1. Start where it all began and get your bearings

There are treasures aplenty in Place Royale, a cobbled square in the Lower Town that’s tipped as the location where Samuel de Champlain founded New France in 1608. It’s also the site of Canada’s oldest church – the Cathedral-Basilica of Notre-Dame de Québec – and an easy walk to the Quartier Petit Champlain’s chi-chi boutique stores. Once you’re done exploring, a funicular rises to the Upper Town.

You can get an overview of the city’s stirring history by visiting its defensive fortifications. Or you can snap photos of the distinctive cityscape with a ferry ride across the Saint Lawrence River to the Quai Paquet park on the Lévis waterfront. 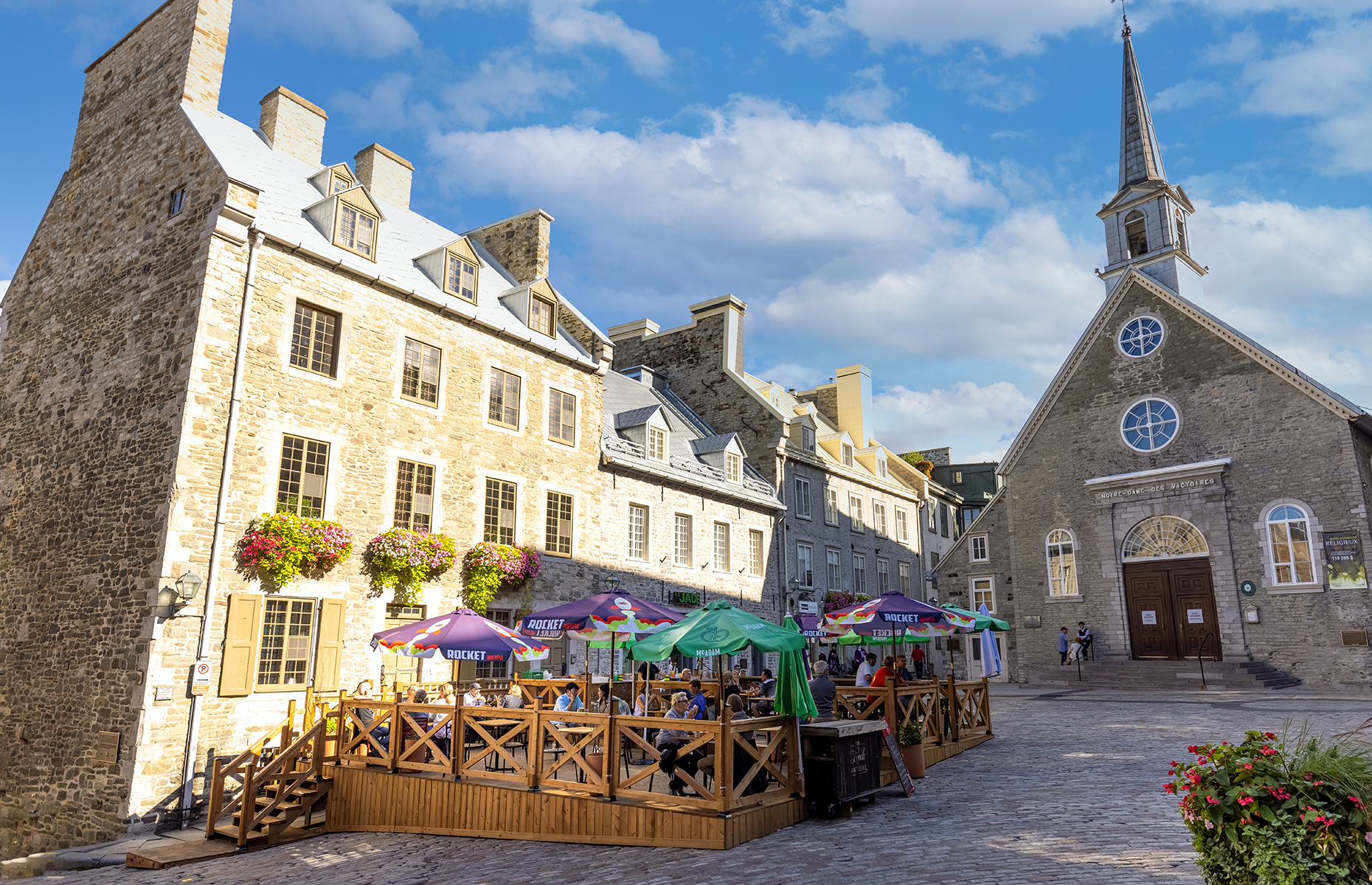 2. Step inside the world’s most photographed hotel

Looking like a cross between a European palace and an imposing fortress, the Fairmont Le Château Frontenac dominates Québec City’s skyline. In fact, locals say that the hilltop icon is the world’s most photographed hotel.

Grab your phone and add to the snaps during a guided tour of the luxury property. There are 7.5 miles (12km) of corridors to get lost in, so tours are a great way of pinpointing key locations inside the sumptuous hotel.

It’s named after the Comte de Frontenac, a two-time governor of New France in the 1600s. The building was constructed during the 1890s as part of efforts to encourage rail travel across Canada, and the grand hotel was a venue of the First Québec Conference in 1943. During top-secret meetings, the Allied leaders agreed to begin planning the D-Day invasion of France.

And if that history doesn’t impress you, maybe afternoon tea in the hotel’s elegant Place Dufferin restaurant will? 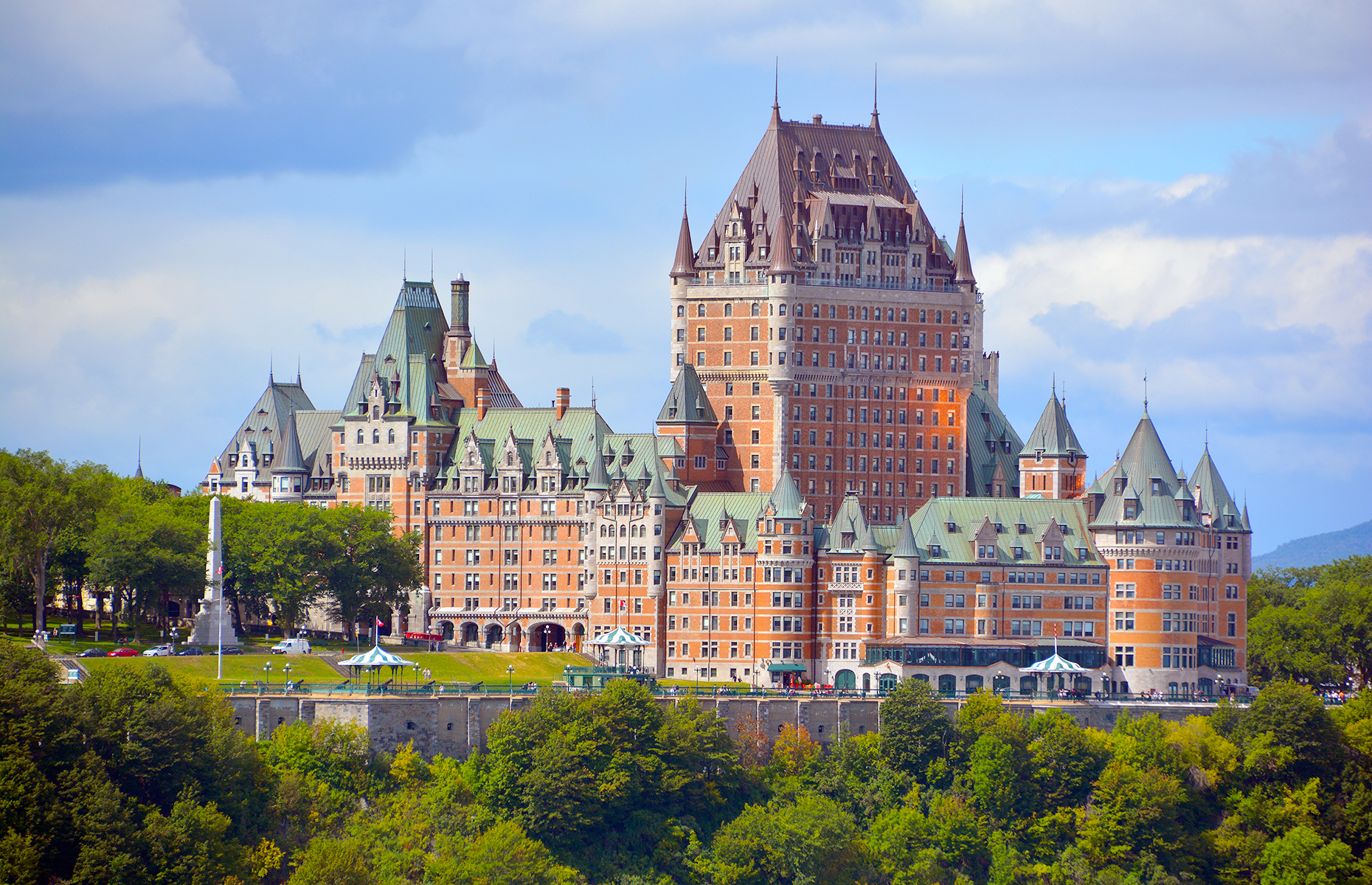 Dufferin Terrace is a wooden promenade that sweeps beneath the Château Frontenac’s cone-topped towers and offers stunning, elevated views of the Saint Lawrence River. It’s named after Lord Dufferin, Canada’s Governor General between 1872 and 1878 and it’s the perfect spot from which to photograph the waterway and surrounding landscapes.

It also stands on top of a crypt holding remnants of four forts and two residences used by governors. During 45-minute tours, Parks Canada guides introduce the story of the Saint-Louis Forts and Châteaux National Historic Site.

The terrace was formerly one of Québec City’s most exclusive locations, inaccessible to most residents, but now it’s one of the most popular meeting places in town. Whatever the season, it’s worth visiting. Street performers belt out tunes and entertain onlookers on the terrace during the summertime. And from December into March you can speed down the long-established toboggan run that drops onto the terrace. 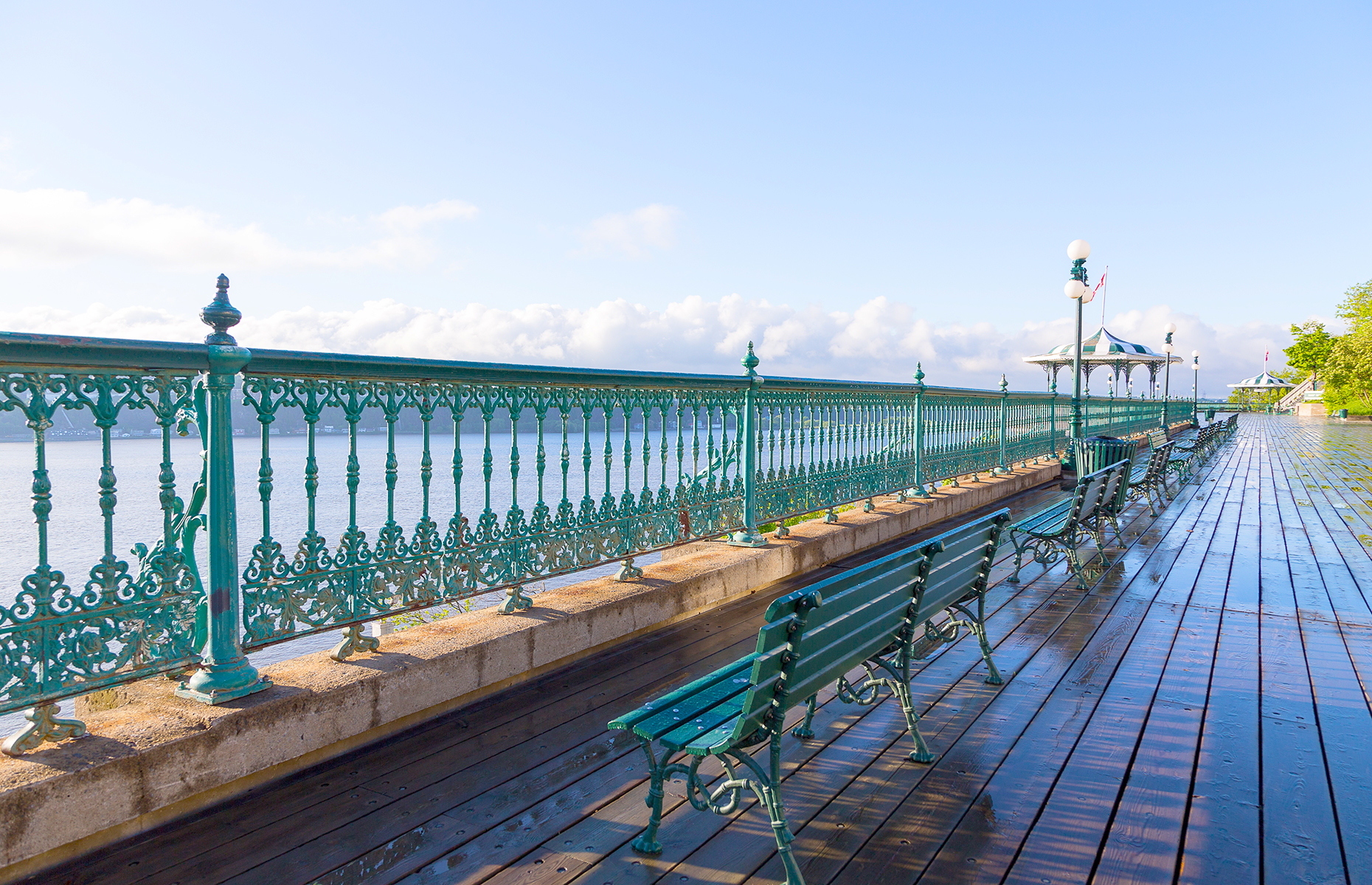 Le Barberie was established in 1997, when the microbrewing revolution began changing drinking habits across North America. It’s evolved over the years and continues to draw drinkers to Saint-Roch’s East End. The kitchen serves dishes such as nachos and smoked brisket sandwiches.

Also in Saint-Roch, the Korrigaine artisanal brewery works with local and regional producers to source the ingredients used in its unfiltered beers and its kitchen. That’s reflected in the convivial brewpub’s seasonal menu changes.

Named after the French explorer who mapped the Saint Lawrence River in the 1530s, serene Jacques-Cartier National Park, with its plunging valleys and mountain plateaus, is 31 miles (50km) north of Québec City.

Long before Europeans arrived, indigenous peoples hunted and trapped animals in the dense woodland and steep-sided valleys of the Laurentian Mountains. Consequently, the region’s waterways have been used to transport goods and people for centuries. For your own adventure, pause at the park’s rental centre to hire watercraft: canoes, kayaks and stand-up paddle boards are all gentle ways of exploring the countryside.

READ MORE: A guide to Montréal

After some thrills? Try white-water rafting on the rapids of the Jacques Cartier River instead. Depending on the time of year, the slopes around Stoneham offer winter sports or mountain biking trails too.

Stay alert and you may even spot some wildlife. The park provides a habitat for three of Québec’s largest land-dwelling mammals – moose, caribou and white-tailed deer. Beavers, black bears and porcupines also count among the park’s residents.

Yurts and wood cabins are fun alternatives to camping, allowing you to gaze up at the Milky Way in a shimmering night sky devoid of light pollution. 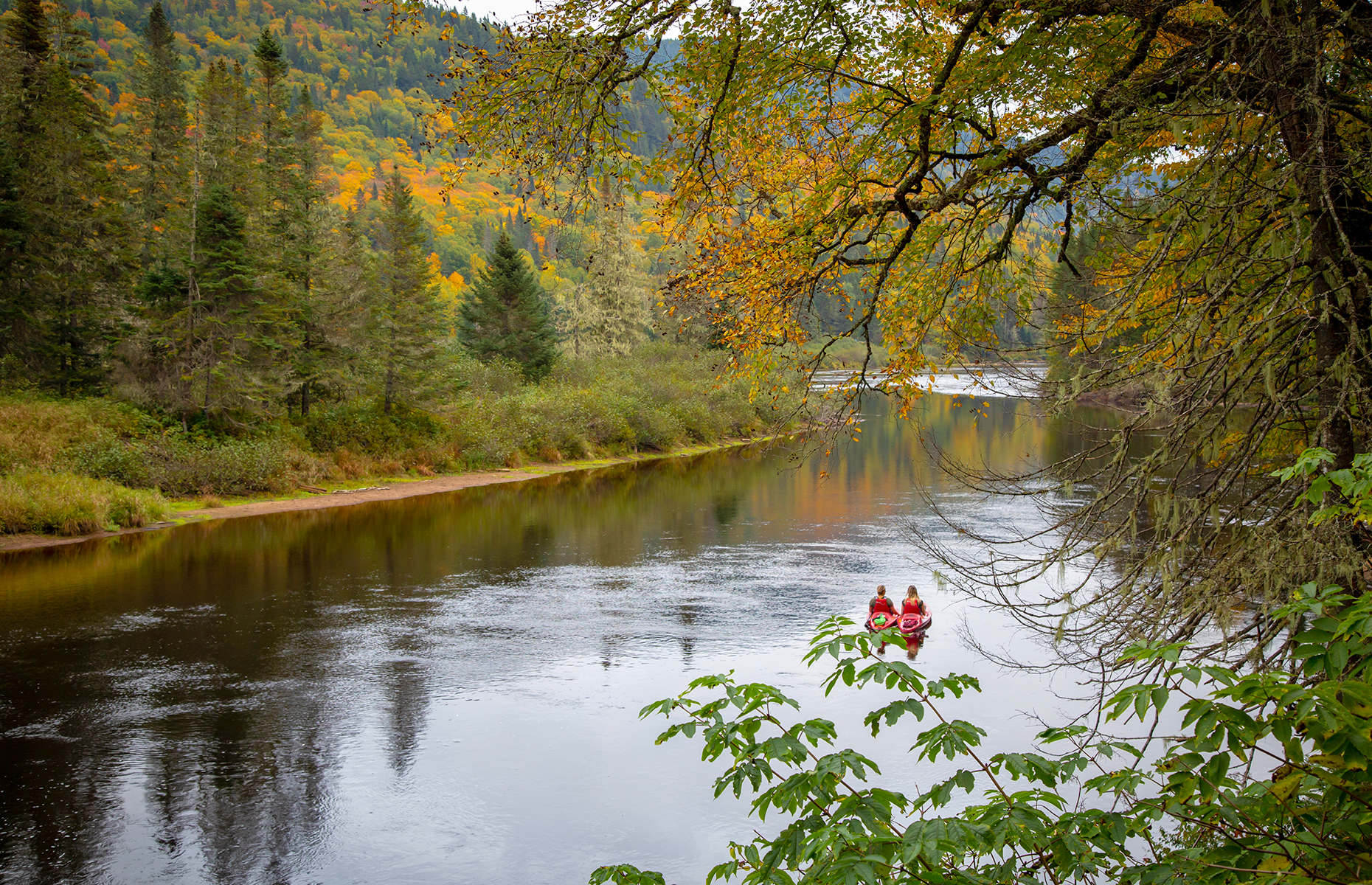 6. Picnic at the Montmorency Falls

Taller than Niagara Falls, Montmorency Falls is set in parkland which is a 15-minute drive from the city, where the Montmorency River crashes 272 feet (83m) into the Saint Lawrence River.

You can view the waterfall from the walking trails that criss-cross the park. A pedestrian suspension bridge spans the thundering river, but you may prefer the vantage point provided by the cable car. Have a head for heights? Gaze out from the via ferrata or launch yourself down the zip line.

READ MORE: These are Canada's most adorable small towns and villages

The site has stories to uncover too. In 1759, French and British troops fought the Battle of Montmorency, before moving to what is today the city’s Battlefields Park for the Battle of the Plains of Abraham – a decisive moment in Canada’s history. 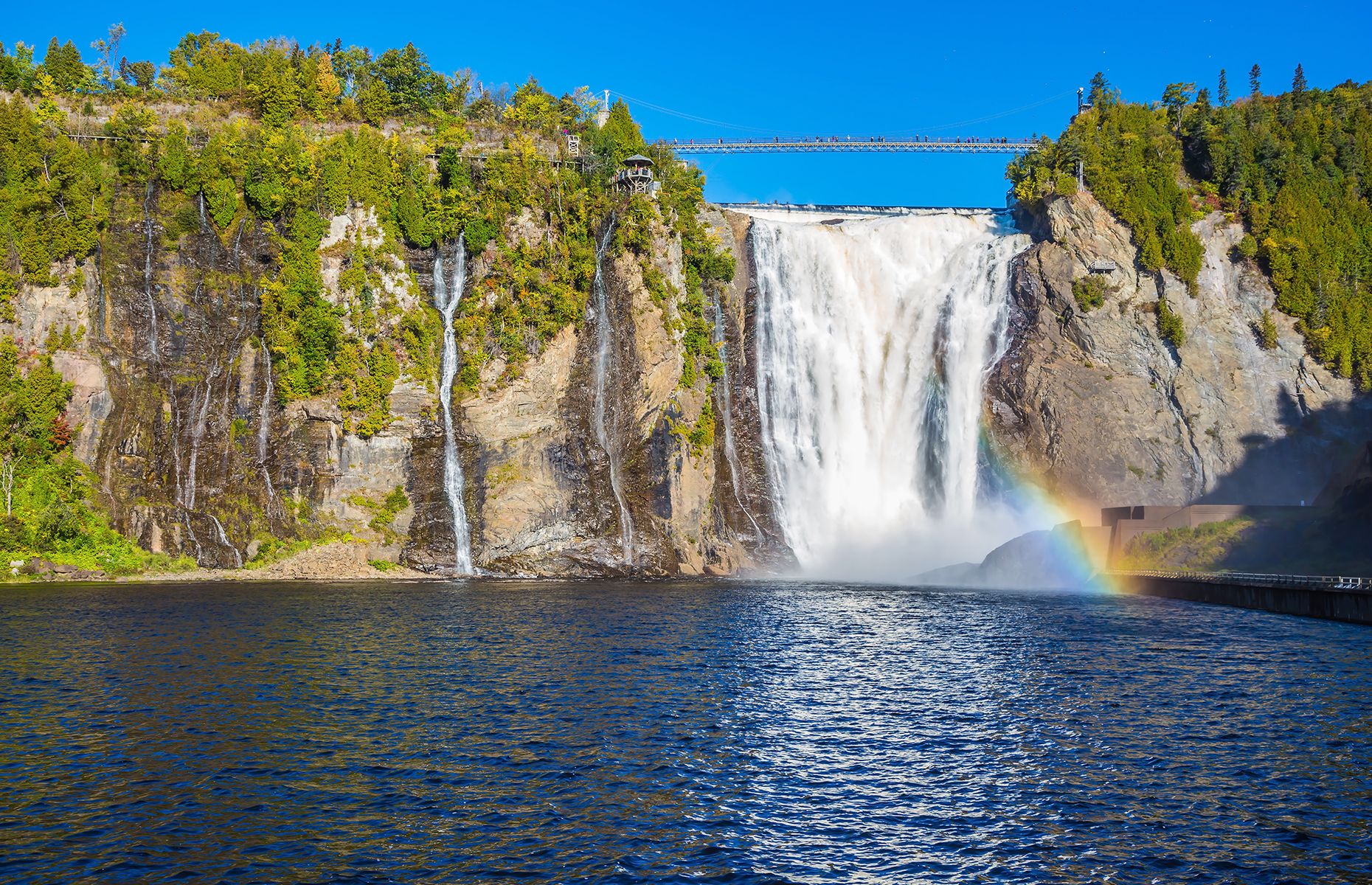 The manor house near the falls is a reconstruction of the summer residence built for Sir Frederick Haldimand, a Governor of Québec in the 1700s – unfortunately, the original Palladian villa was destroyed by fire in 1993. The site is associated with the romance of Julie de Saint-Laurent and Edward Augustus, the Duke of Kent.

Fall in love with the area by picnicking by the waterfall. Do it in style by purchasing pastries, artisanal bread and regional produce from the Marché du Vieux-Port or Marché Sainte Foy before departing Québec City.