Explore Islay: things to do, where to stay and what to eat

The stunning island of Islay is the southernmost of the Inner Hebrides, off the west coast of Scotland, and is famous the world over for its whiskies. But there’s so much more to this blissful island paradise than just a wee dram or two. Spend the weekend there and you'll soon find out...

Top places to visit in Islay

The third largest island in the Inner Hebrides, Islay is blessed with mile upon mile of endless sandy beaches, copious birdlife and some very cute wee villages. Not to mention nine working distilleries! But wherever you do venture, be sure to seek out these three spots...

The island’s trim capital is home to a teeny harbour, a circular church designed to deny the devil a corner to hide in, and – naturally – a whisky distillery. This is the island’s oldest, established in 1779, and there’s a well-stocked bar for tastings with views across Loch Indaal. 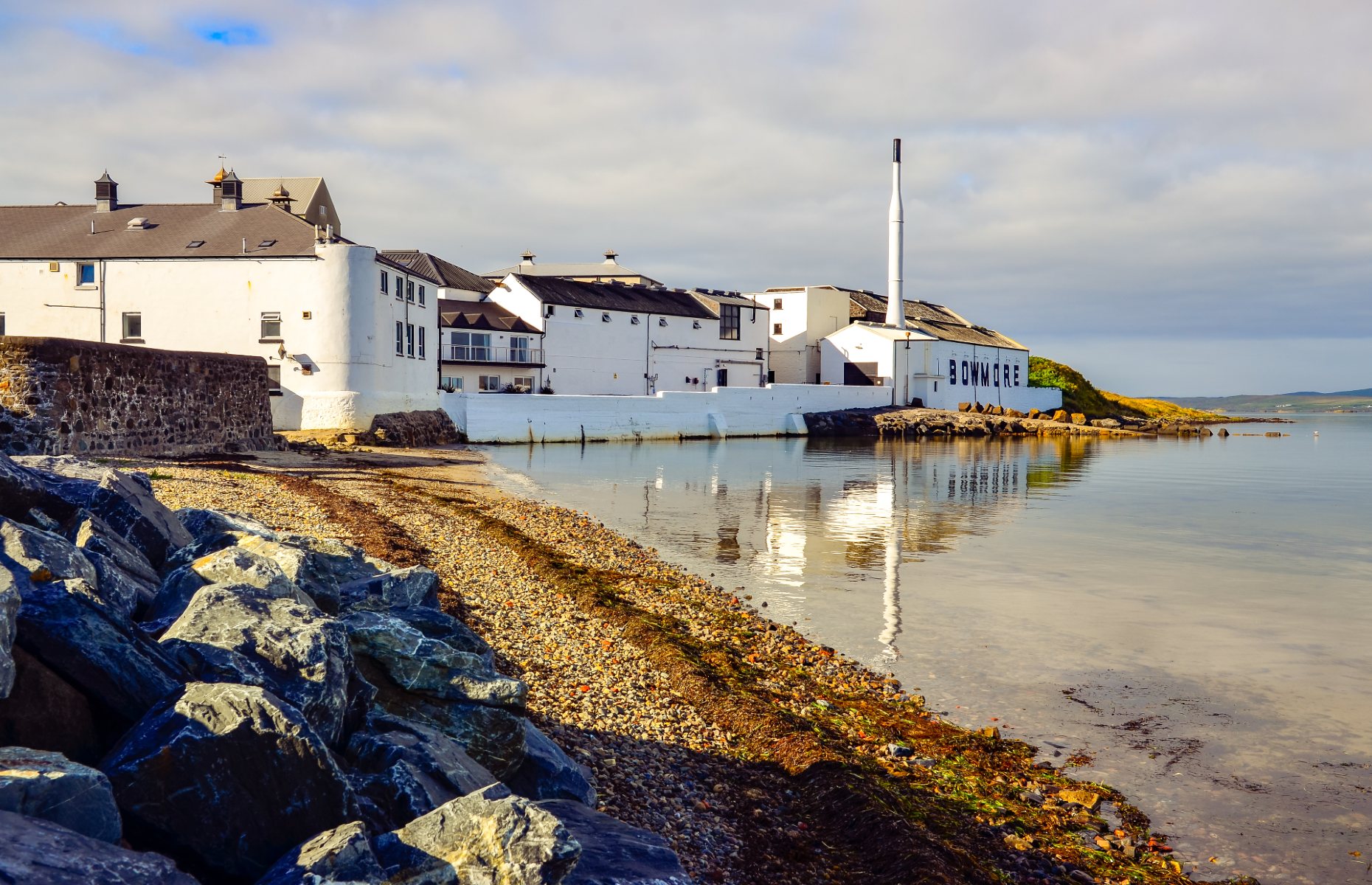 Once in control of all the Hebrides, the Lord of the Isles had his seat at Finlaggan, in Islay’s northeast. What remains is strung across the tiny islands on the eponymous loch and is reached by a wooden walkway.

You’ll stand amid the ruins of the Great Hall, a 14th-century chapel and a stone jetty, the wind whipping your hair as you wonder at what power must have been required to hold fort at such a naturally unfortified location. 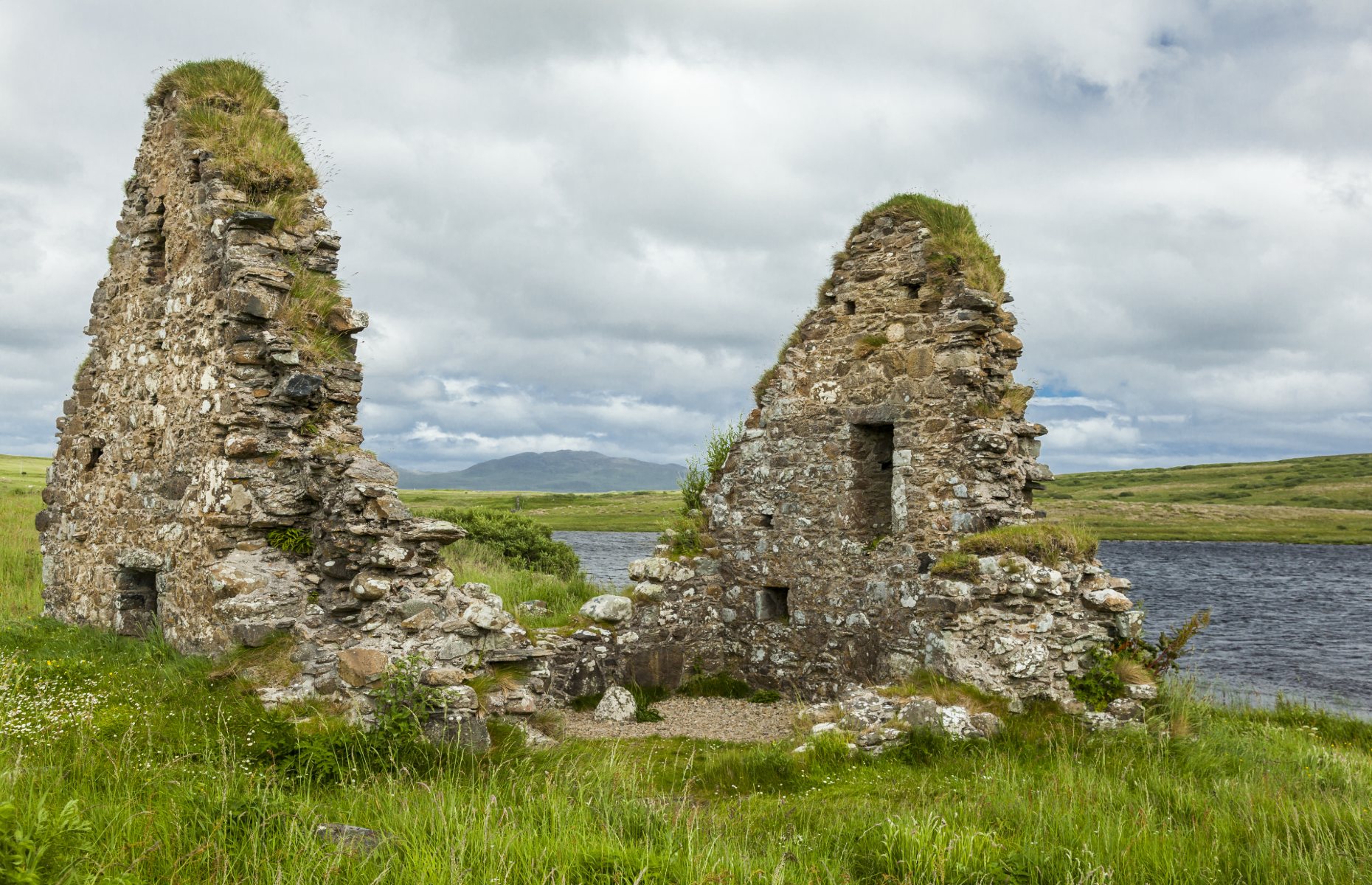 The nubby Oa peninsula sticks out from Islay’s southwest and is largely protected as an RSPB reserve. A two-mile circular trail takes you up on the clifftops and out to the American Monument, which commemorates two ships lost in these waters during the First World War. 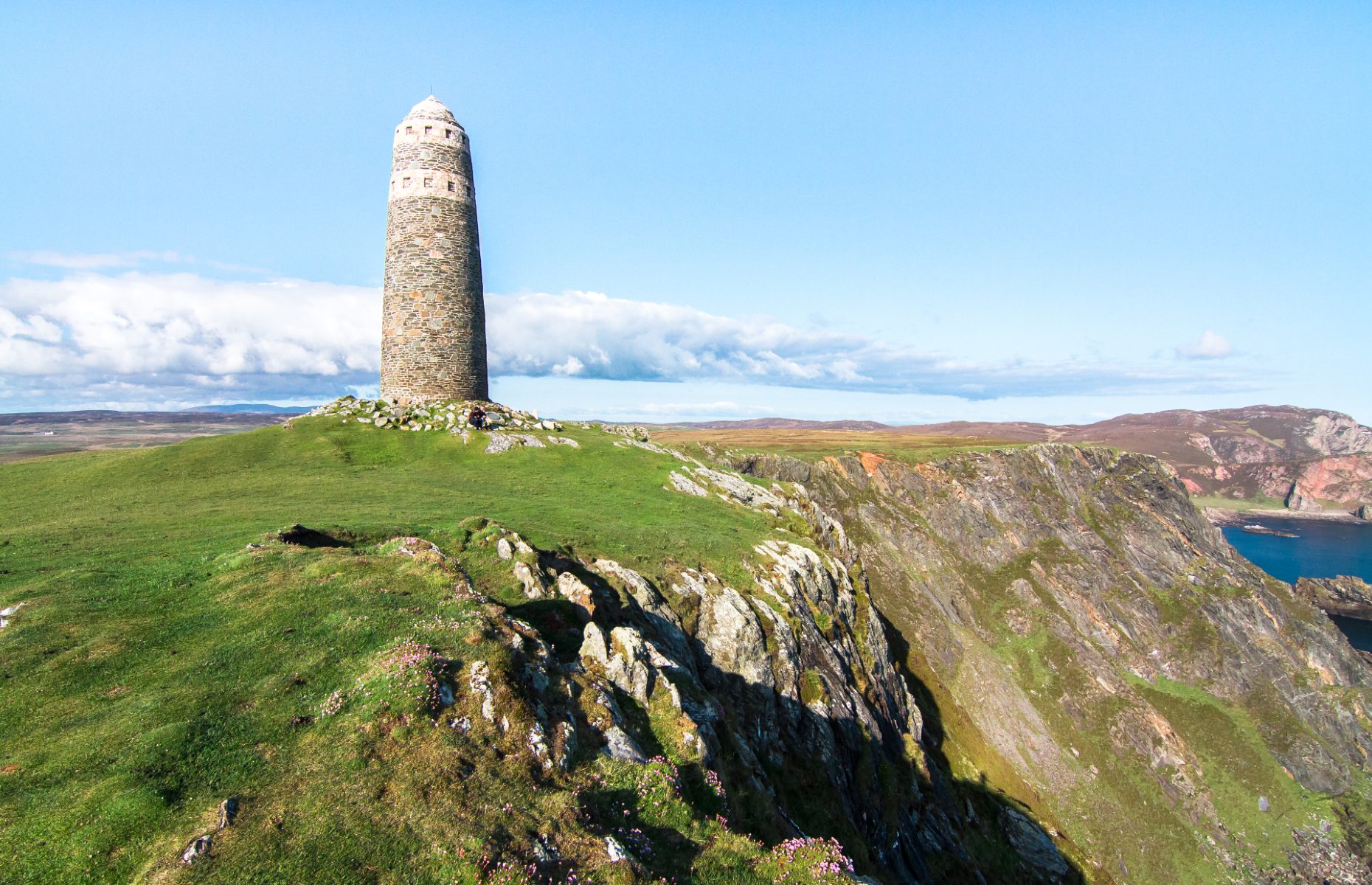 Look out for grey seals on the rocks below, golden eagles, hen harriers and the extremely rare chough in the skies above and, on a clear day, perhaps even Ireland on the horizon to the south.

The best beaches in Islay

Islay may be small, but the island has a whopping 130 miles of coastline, which means beaches aplenty. Sure, you might not be sunbathing here, but you will most likely get a white-sand beach all to yourself.

The safest for swimming are those on the island’s lochs, including Tayvulin on Loch Gruinart (which is said to have the island’s warmest waters), Black Rock on Loch Indaal and the island’s vast – and aptly named – Big Strand, a seven-mile stretch of sand along Laggan Bay (pictured). 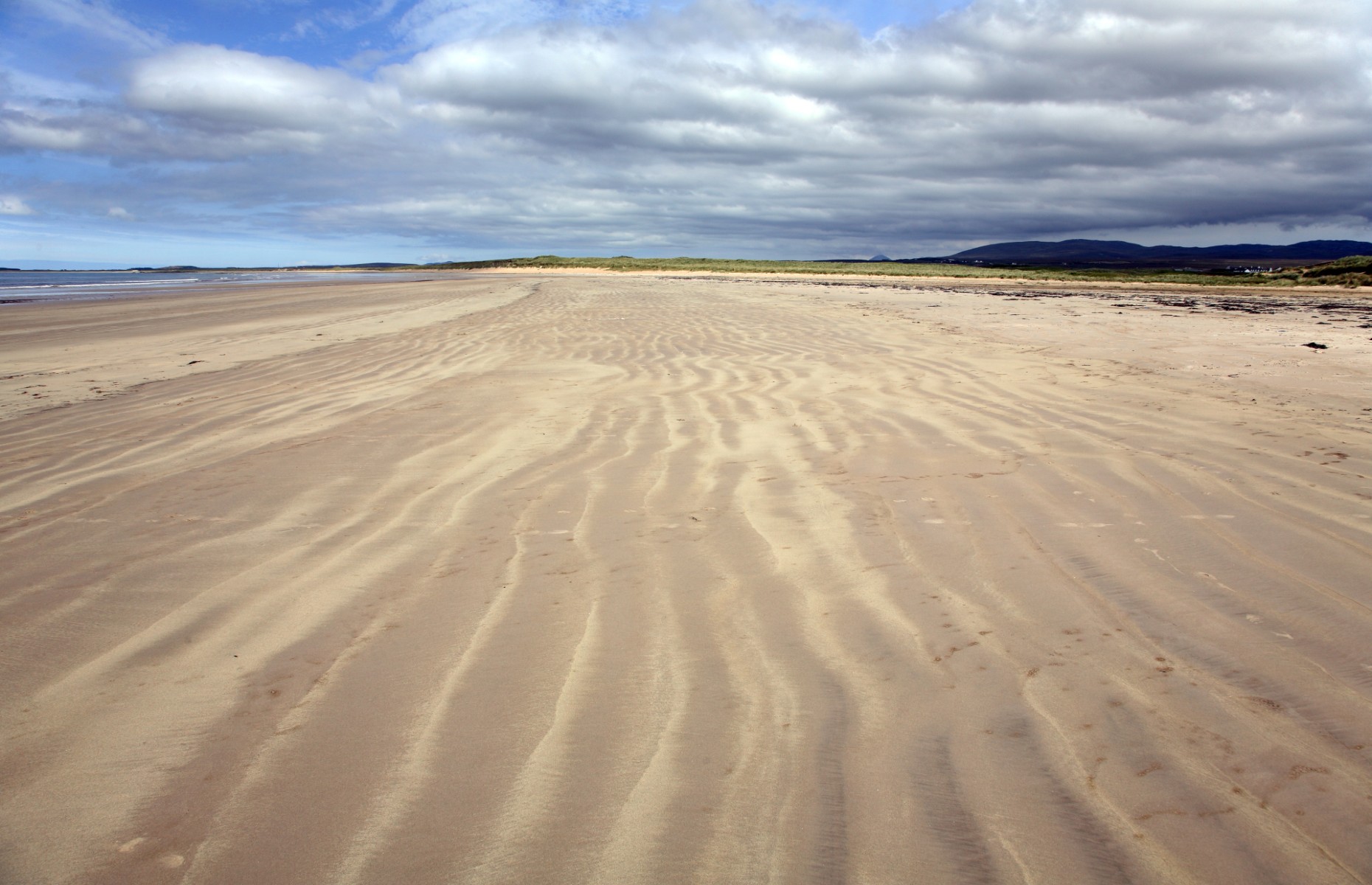 Top pick, though, is pebble-and-sand Claggain Bay, out past Ardbeg and just before road’s end on the sheltered east coast. Here you’ll count more seals than people and can enjoy gorgeous views across to Kintyre.

Close by is the Kildalton Cross, a beautifully intricate stone cross that is one of the few remaining in Scotland. There’s even an honesty café here, offering tea and homemade cakes. 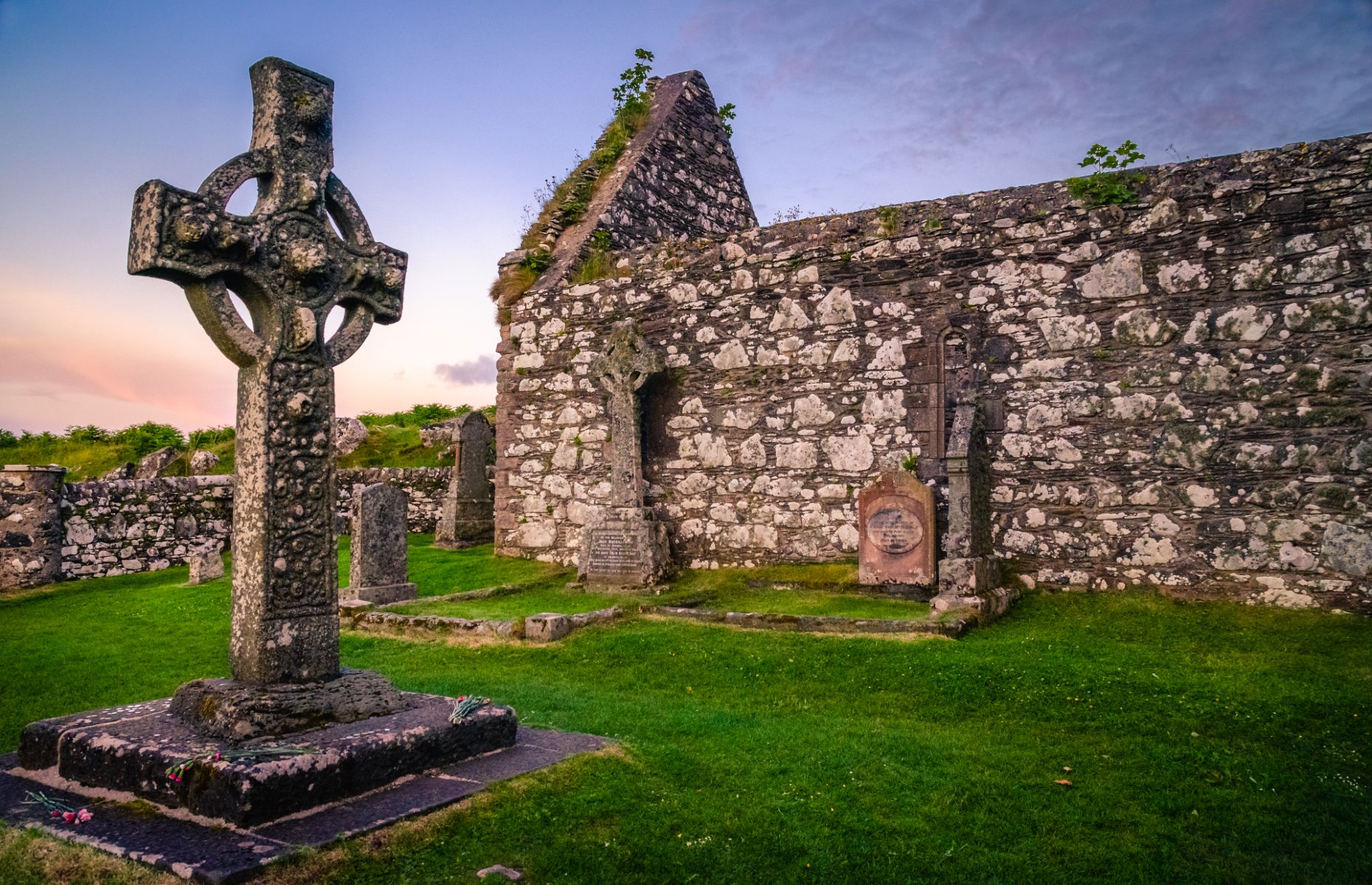 The beaches on the wilder west coast aren’t safe for swimming but a windy walk through the dunes here, the Atlantic spray in your hair, is hard to beat. Machir Bay has more than a mile of dune-backed sands for romping along, while Saligo Bay is simply spectacular at sunset.

The best walking spots in Islay

Whisky lovers will surely feel that the Three Distilleries Path isn’t just the best walk on Islay but the best on the planet. Joining up the three south coast distilleries of Ardbeg, Lagavulin and Laphroaig, this accessible pathway is smooth enough for pushchairs and wide enough to be shared with cyclists. As well as the chance to pop in for a wee dram at each of the three big-name distilleries, this walk offers stonking sea views along its four miles. 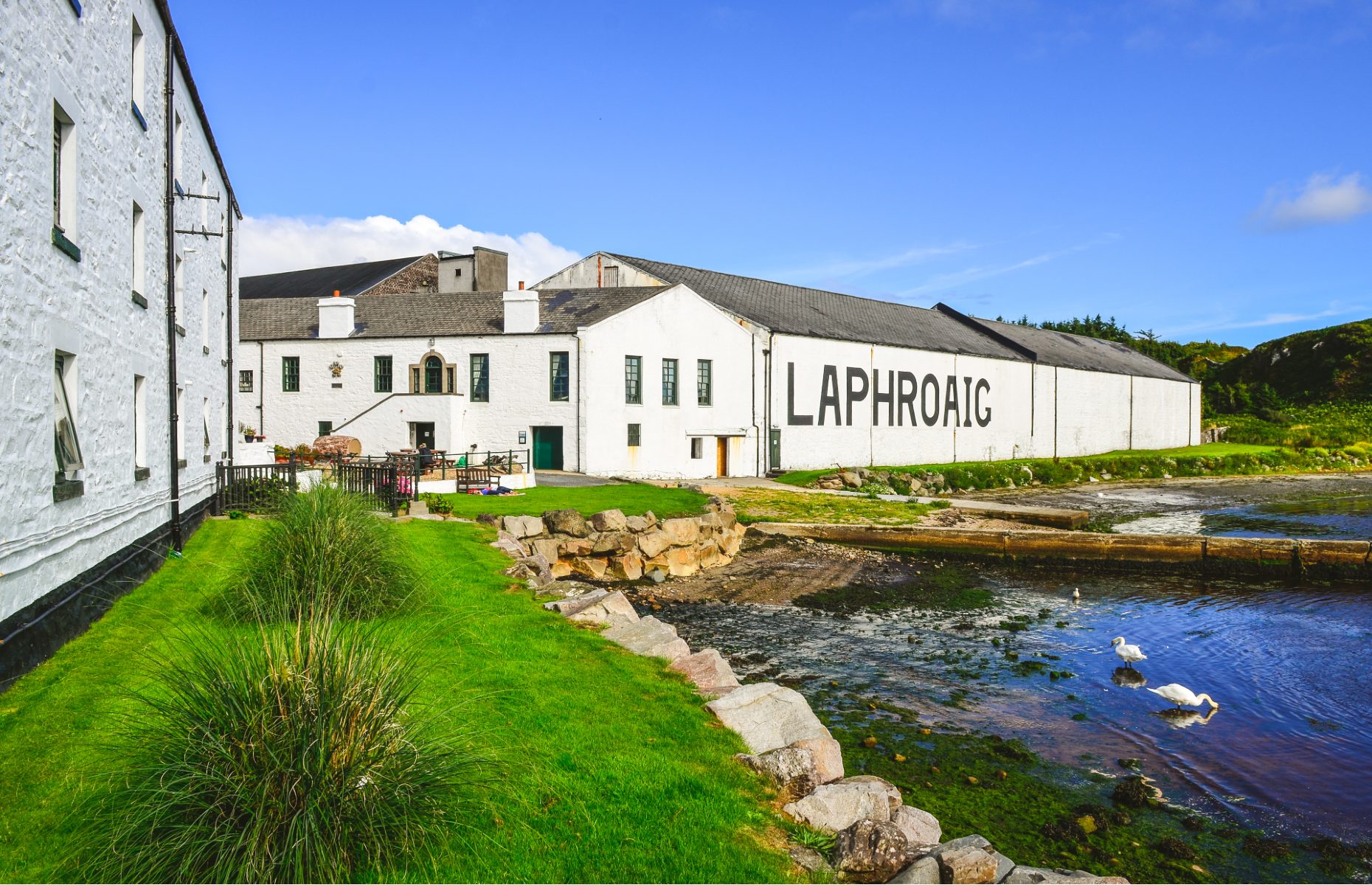 In the island’s north, the circular track at Ardnave Point is one of the island’s best short walks, passing the remains of a roundhouse dating from 2000 BC and providing the best chance to see large flocks of the rare chough. Grey seals pup on offshore Nave Island in the autumn and there are glorious views up to Jura, Colonsay and Mull.

More birdwatching abounds at Loch Gruinart RSPB reserve, where you can walk out to two hides among the grassland and open water to spot barnacle and white-fronted geese in winter, peregrine falcons and corncrakes in summer. 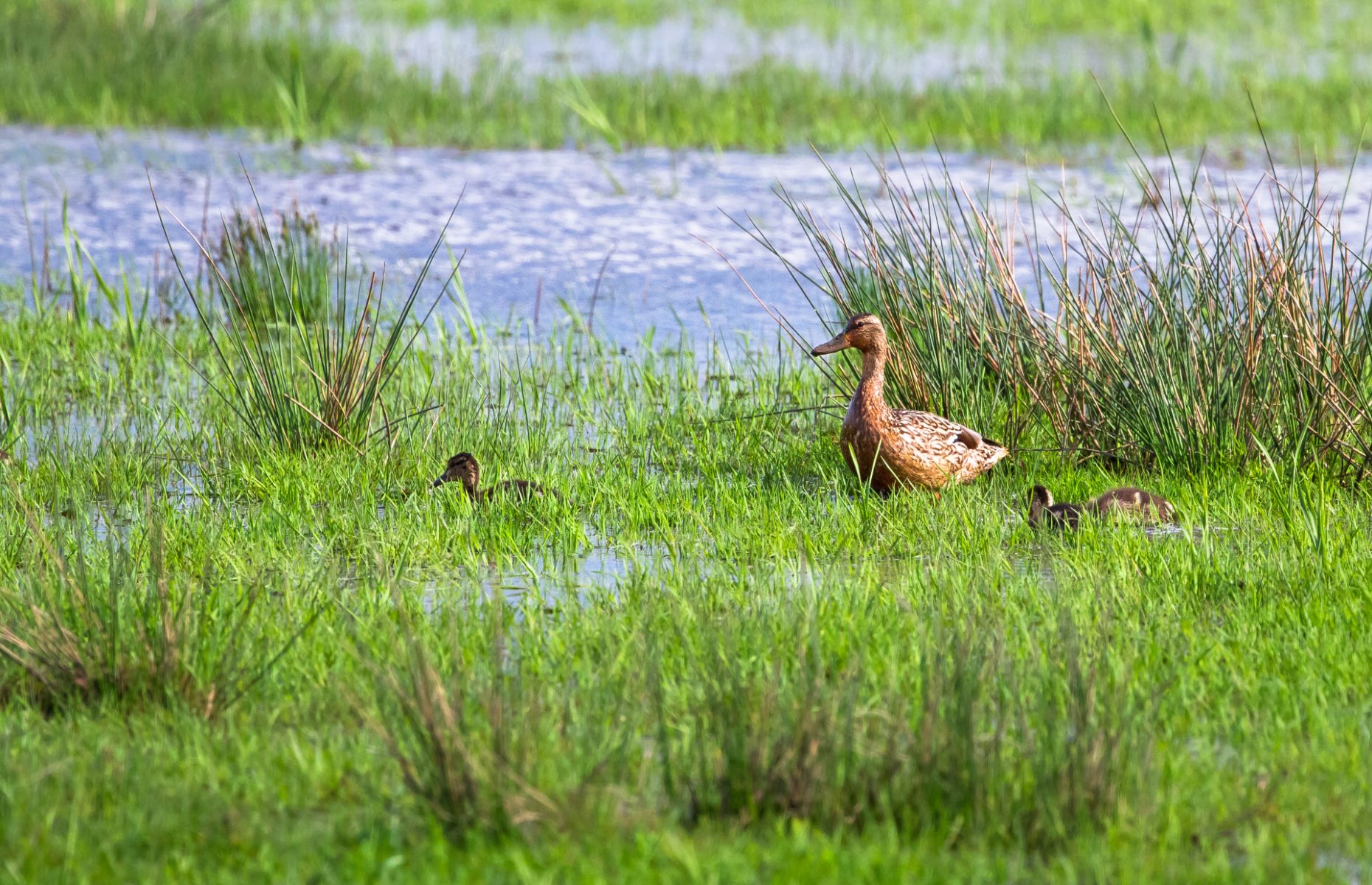 READ MORE: Why Scotland's Tay Country should be next on your wish-list

Where to stay in Islay

Islay’s largest and most luxurious hotel is The Machrie, where you’ll find a links golf course, a restaurant with panoramic sea views and 47 rooms, suites and lodges, many overlooking the golf course. You can walk to a local beach and you’re just five minutes from the island’s airport, to boot.

A post shared by The Machrie Hotel & Golf Links (@themachrieislay)

For something cosier, book in to the Port Charlotte Hotel on the lochside in the eponymous, white-washed village. There are 10 en-suite bedrooms and the elegant restaurant serves beef, venison and lamb from nearby farms as well as locally caught seafood.

Alternatively, stay in the heart of the island, at the Bridgend Hotel which has simple rooms in easy reach of all Islay’s attractions.

What to eat in Islay

It’s less about the food and more about the whisky on Islay, where nine working distilleries make full use of the island’s wealth of peat. Islay whiskies are world renowned, and it’s well worth taking the time to visit at least a couple of the distilleries for a wee dram.

Kilchoman Distillery is the only independent distillery on the island and everything takes place right here on the farm, from growing the barley to bottling the end product. It’s all 100% Islay and the café serves homemade Cullen skink, soups and cakes as well as coffees spiked with whisky.

All that whisky needs soaking up, and the island stands ready with high-quality meat and seafood in abundance. Wherever you go, ask about the catch of the day – you’ll often find boat-fresh lobster, langoustines and scallops. Islay lamb is another local treat, and Scottish smoked salmon is served almost everywhere. 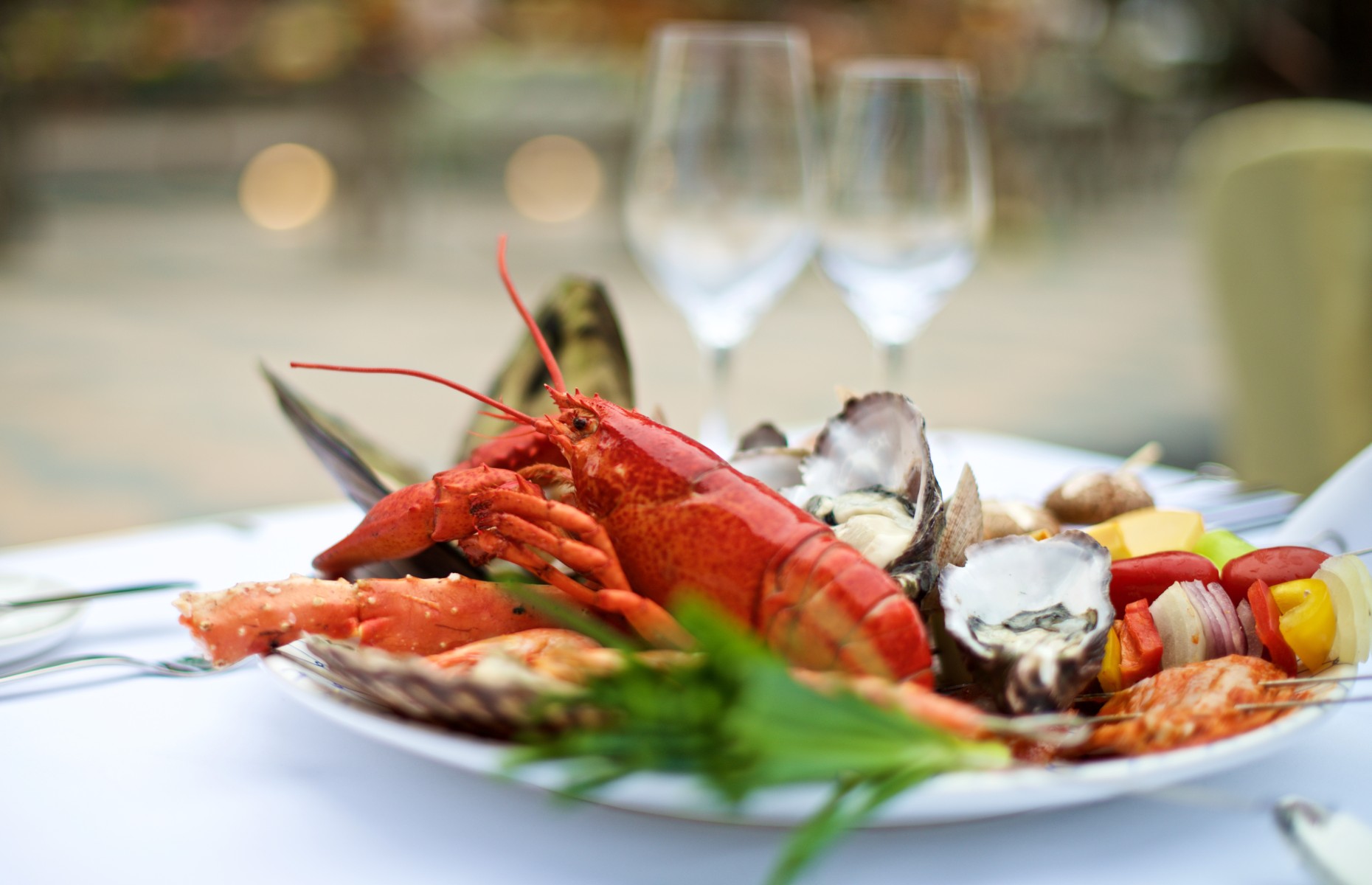 The ultimate long weekend in Islay

Check in to: The Machrie Hotel, choosing a ground-floor Lodge room for views of the golf course and your own patio area right on the links. Refuel with a coffee in the lounge, which has sweeping views out over the Islay countryside.

Take a stroll: in The Oa Nature Reserve, where RSPB-owned land protects the rare chough, a type of red-billed crow that can be seen on Islay and neighbouring Colonsay. 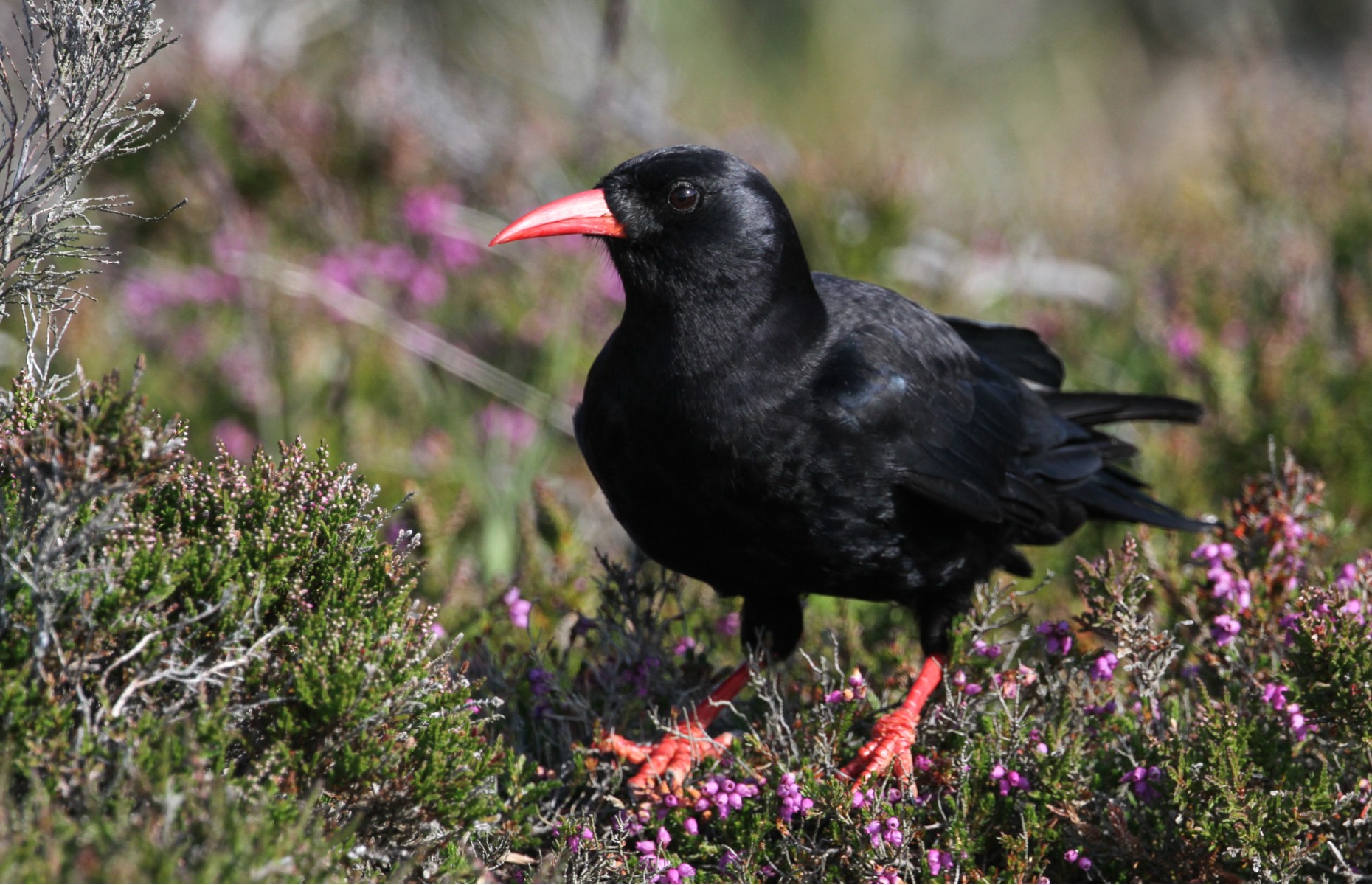 Dine at: the Islay Hotel on the seafront in Port Ellen. There are daily specials, often featuring local scallops, langoustines and dishes made with the island’s whiskies – think chocolate brownie with a hint of Ardbeg.

Spend the morning at: Finlaggan, where you can stand in the footprints of the once all-powerful Lord of the Isles. There’s a fascinating exhibition inside, complete with a virtual reality reconstruction of the site, while outside you can walk above the reed beds on a wooden walkway to stand in the ruins of the old chapel and conjure up the ghosts of former clan chiefs.

Lunch at: Ardbeg, having left the car in Port Ellen and jumped in a taxi out to the furthest flung of the three world-famous distilleries that line the Three Distilleries Path. There are wood-fired pizzas and homemade soups served up outside from a converted Airstream trailer.

Have dinner at: SeaSalt Bistro, in Port Ellen. Chill out in this relaxed bistro over local seafood (the scallops are exceptional) or the daily changing chef’s curry. There’s usually lobster too, as well as a decent wine list, Islay Ales and limited edition whiskies from the island’s distilleries.

Play golf at: The Machrie Links, designed by Scottish professional golfer Willie Campbell in 1891 and recently modernised by course architect DJ Russell. The 18-hole championship course challenges golfers of all abilities, while those who can’t quite tackle the full 18 can play the Wee Course, a 6-hole par-three. There’s also the Hebrides putting course and an all-weather driving range. 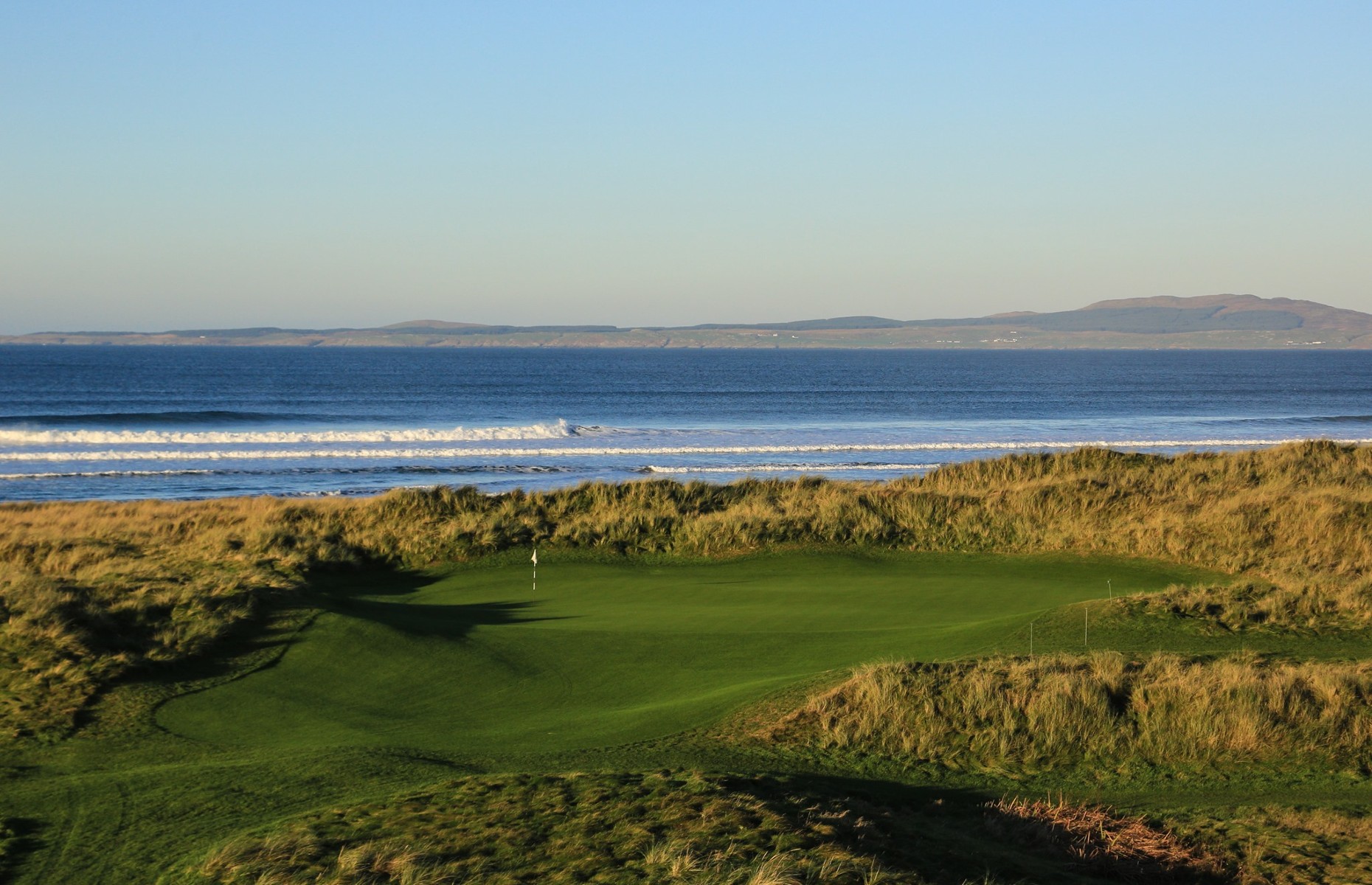 Stay for lunch at: 18, which overlooks the 18th green and serves the best of Islay’s produce, including Highland beef from the island’s Octomore farm and haddock battered in Islay Ales batter.

Hit the beach at: the Big Strand on Laggan Bay, where seven miles of powdery white sands tempt you into a lengthy walk or perhaps even a swim or surf. This is excellent sandcastle-building territory too.