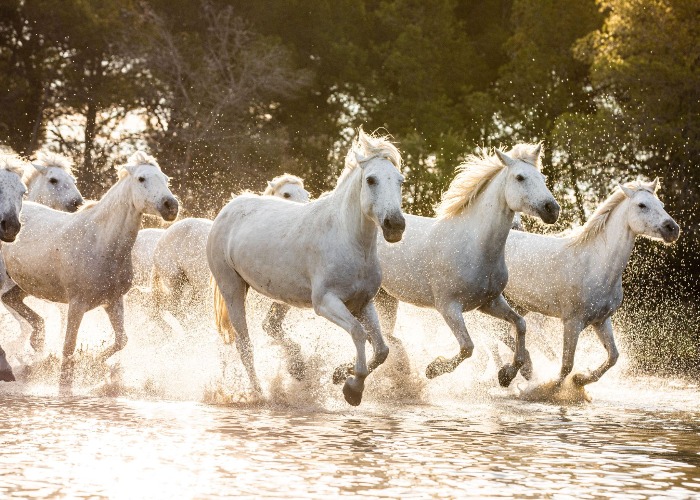 From its salt flats and lakes to its wild horses and flamingos – this beautiful part of Provence in the south of France has a personality all of its own. We count down things you must see and do when visiting the Camargue region.

Think of the south of France and chances are your mind will be filled with images of golden beaches, glittering megayachts and glamourous film stars, all backdropped by rugged rising hills and distant mountains. But one corner of this famous sun-drenched part of the Mediterranean is not like the rest.

Fanning out beneath the historic Roman city of Arles, the Camargue is a wild wetlands region that looks nothing like its tourist-heavy counterparts further along the coast. Home to black bulls, indigenous white horses and thousands of bright pink flamingos, the Camargue is a unique kaleidoscope of tranquil rice paddies, rose-coloured salt flats and flat marshland.

Here’s how best to explore the Camargue.

Covering more than 100,000 hectares, the Camargue is one of Western Europe’s richest ecosystems but its landscapes can be a little difficult to comprehend at first glance. To get a grasp of the variety of biodiversity in a region that changes with the seasons, head down to the popular coastal town of Saintes-Maries de la Mer and take a ride on one of the local 4x4 safari tours.

Step aboard one of Le Gitan’s creamy-white open-top Land Rovers where one of their knowledgable guides will take you on dusty backroads that aren’t accessible to regular cars. Rather than guessing at what you’re seeing, the guides explain much of the unique fauna that makes the Camargue their home. From spotting colourful European bee-eaters to explaining how flamingos get their distinct pink hue, it’s a great way to explore a wide area that isn’t well covered by public transport. 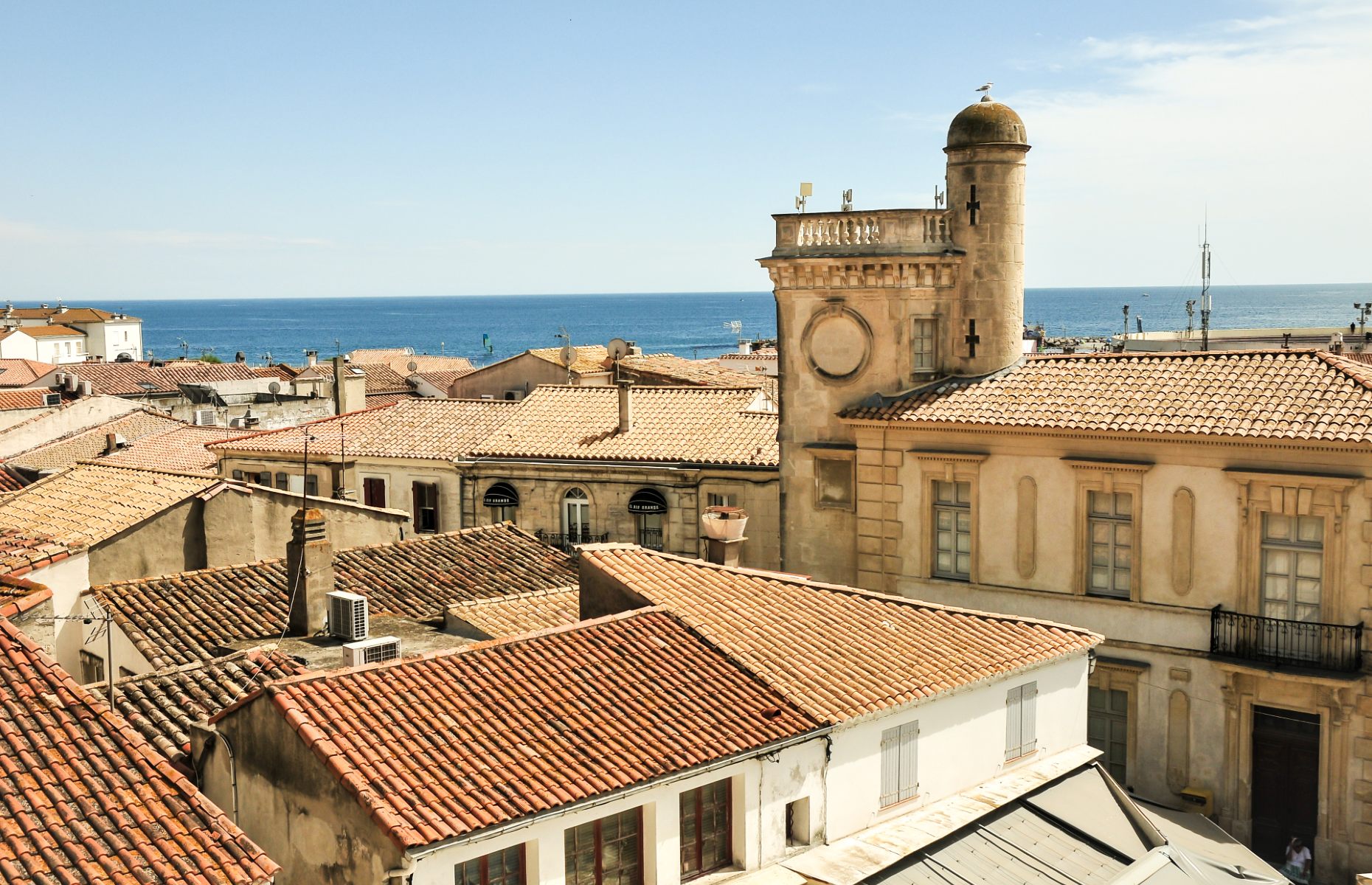 The Camargue has a number of iconic symbols that separate it from the rest of France, and few are more recognisable than the elegant white horses that are omnipresent throughout the region. Considered one of the oldest breeds of horses in the world, they’re the traditional mount of the gardians – the Camargue’s ‘cowboys’, who herd the famous black bulls used for local races.

Though images of the horses dramatically prancing through water give the impression that they’re wild, the Camargue horses are largely semi-wild and are often used to give rides to visitors. Taking a ride on a Camargue horse is a peaceful and distinctly camarguaise way of seeing the marshlands and there are plenty of farms (known locally as manades) offering rides. 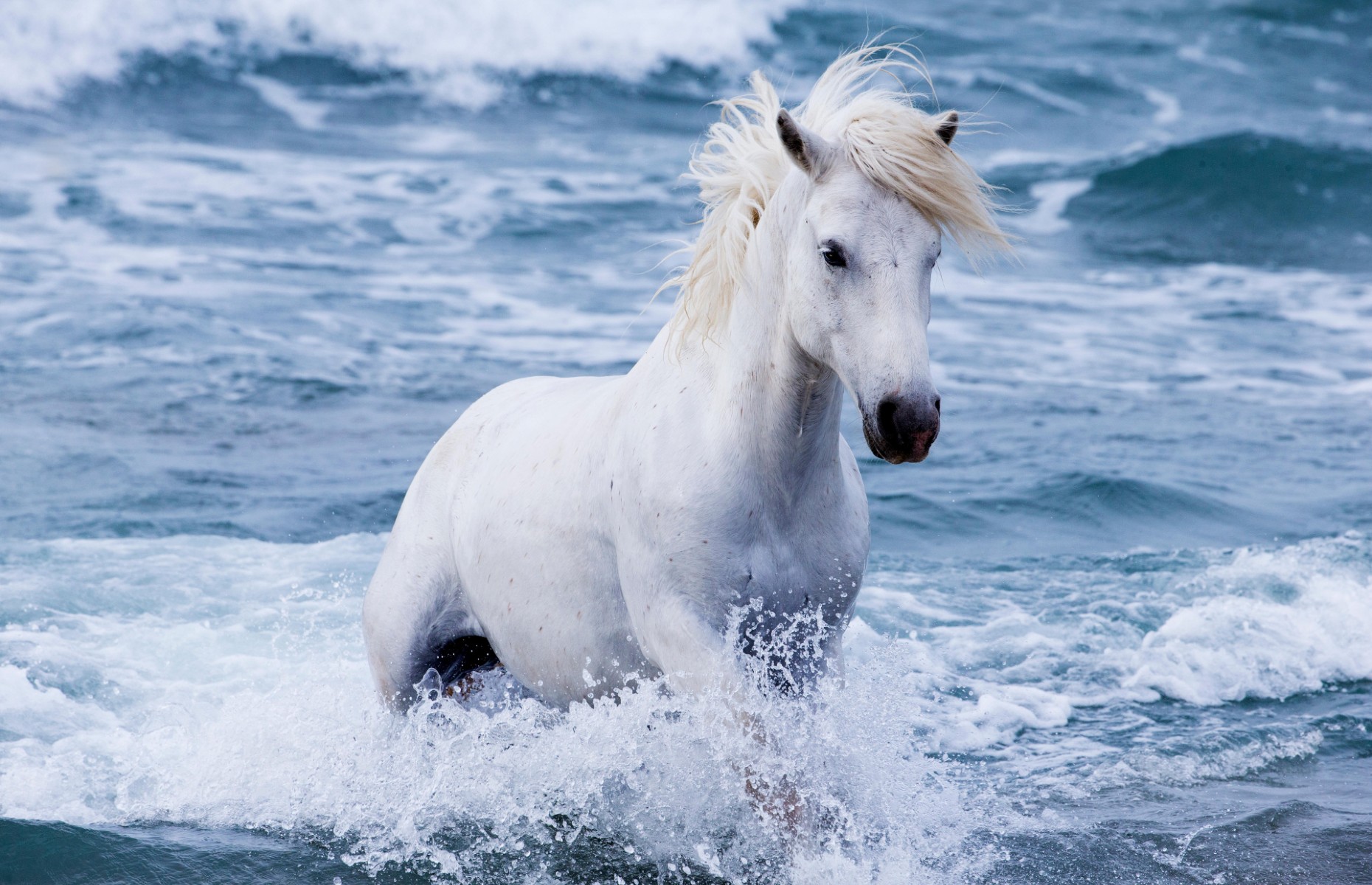 From the dull purple salt steppes of the Camargue National Reserve to the bright pink salt pans just south of Salin de Giraud and Aigues-Mortes, the Camargue’s salt ponds blanket the central and southern parts of the delta. Given their distinct colour by the microscopic algae, dunaliella salina, the salt flats are one of the region’s more bizarre sights and are an important source of food for birds, and in particular flamingos.

Hire a bike from one of the nearby towns or villages and follow the dedicated trails to see this odd landscape up close. The terrain can be challenging in places and switches from thick sand to loose stone swiftly, so make sure to hire a mountain bike (called a VTT or Velo Tout-Terrain in French) at hireshops like Le Velociste to tackle the trails successfully.

4. See France’s only flamingos up close

The pink flamingos of the Carmargue can be seen from both the roads and the walking trails, though they’re sometimes just glinting dots in the distance on a vast lake. To see these strange and beautiful birds up close, make the journey to Parc Ornithologique du Pont de Gau, around three miles north of Saintes-Maries-de-la-Mer.

Among various settings of marshes, ponds, reedbeds and salt-marsh scrubs, the park is an ideal birdwatching site and has been family-run since 1949. From its boardwalks and observation towers, there’s ample space to view flamingos, herons, slender-billed gulls, oystercatchers and beavers.

It’s no surprise that the remarkable climate and terrain of the Camargue means that it produces some of France’s more distinct cuisine. Historically a hearty dish served to hungry gardians, gardiane de taureau is a rich, slow-cooked stew made from bull meat and served alongside rice from the Camargue marshlands. As this sort of meat isn’t easy to find at a butchers, it’s certainly something to be sampled if you see it on a menu here.

Don’t miss the chance to taste tellines either. A small, clam-like shellfish, they resemble vivid violet fingernails and taste deliriously sweet. They also go well served with pasta and local rosé wine (around 94% of the wine produced in the Camargue is rosé). 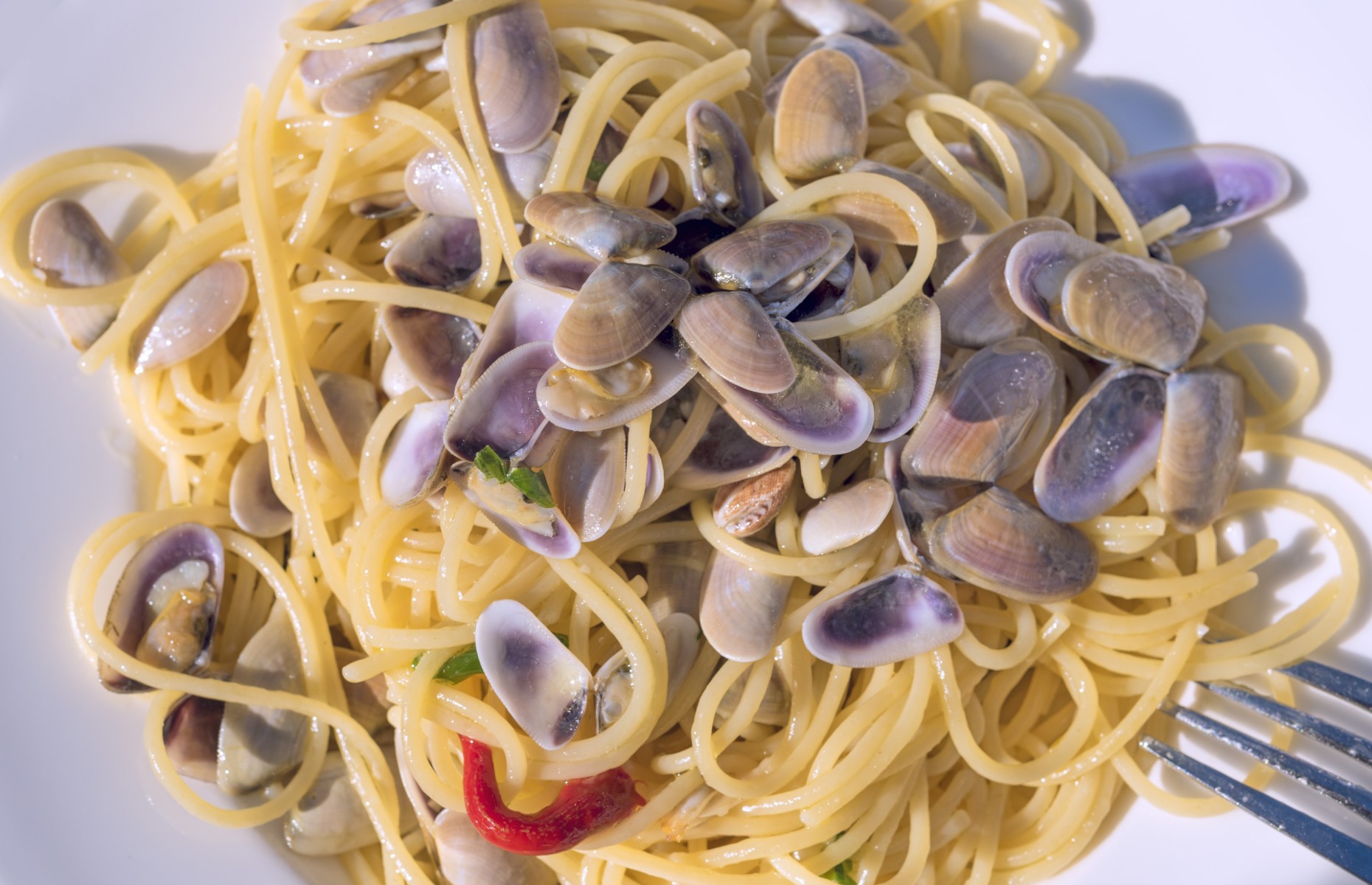 With its useful location and train links to Marseille and beyond, the historic city of Arles is a handy starting point for any trip into the Camargue. In more recent years it’s been better-known as a home to Vincent Van Gogh during his time in Provence and many of the inspirations for his paintings still exist, including the café in Place du Forum depicted in his evocative painting, Café Terrace at Night.

But this was a city built by the Romans and there’s no greater reminder of that past than the spectacular 2,000-year-old Arles Amphitheatre that dominates the skyline with its two-tiered stone arches. Next to it lies the Théâtre Antique (Ancient Theatre), which is smaller but still used to this day for summer evening dance and theatrical performances. For a deeper dive into Arles’ long Roman history, head to the Departmental Museum of Ancient Arles, which displays architectural pieces, mosaics, sarcophagi and objects of everyday life. 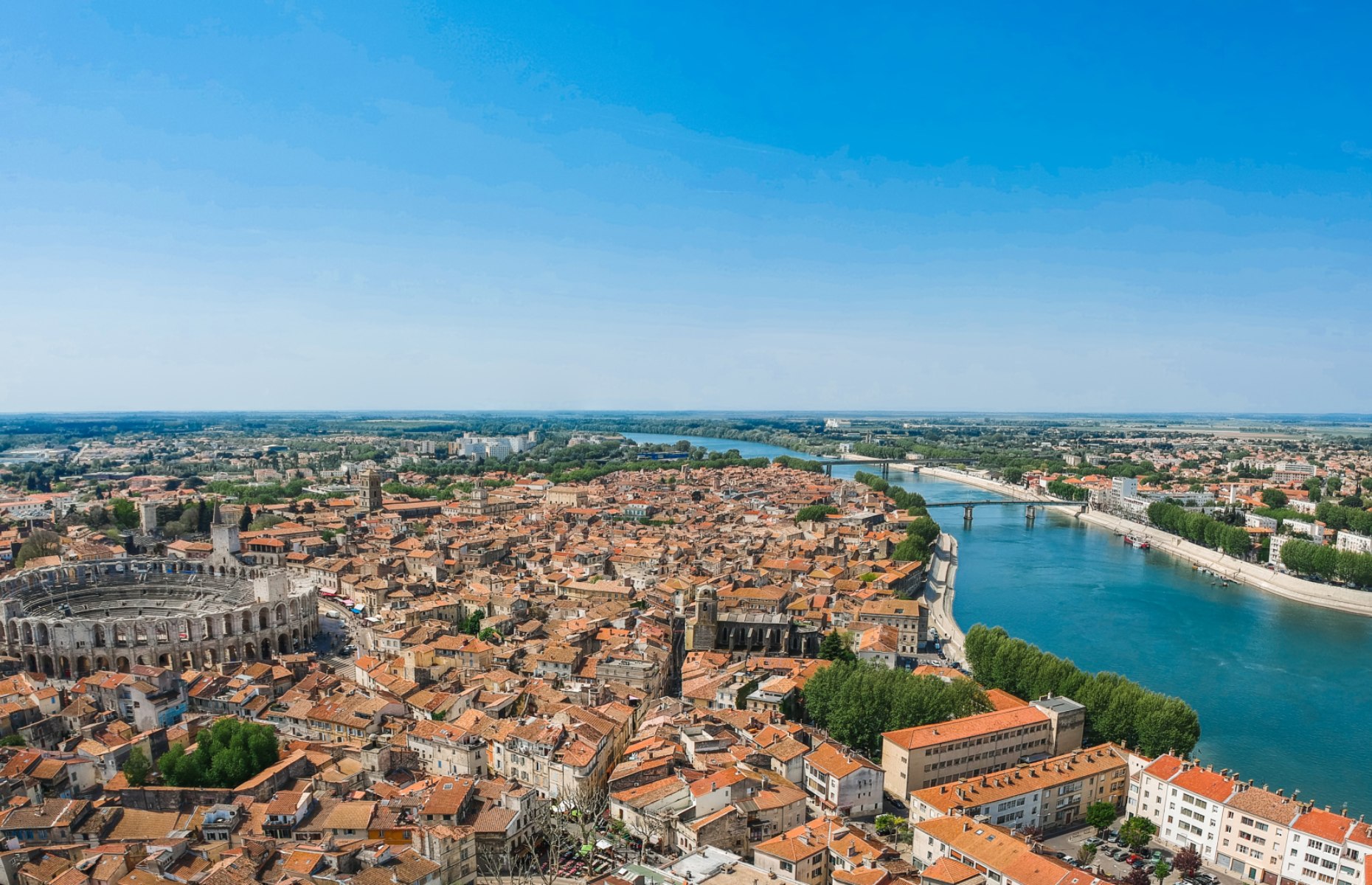 READ MORE: These beautiful French villages will give you wanderlust