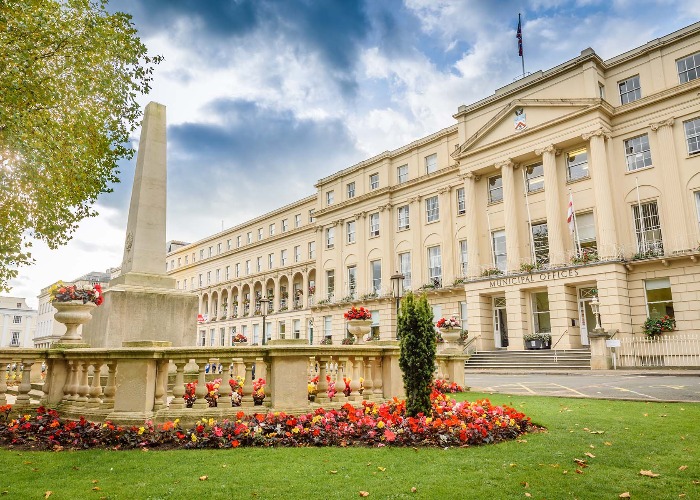 This elegant spa town on the edge of the Cotswolds mixes internationally renowned festivals and horse racing with a vibrant foodie and shopping scene.

With its grand Regency architecture, fine green spaces and boutique shops and restaurants, Cheltenham is a destination that exudes elegance and charm. But this town on the western edge of the Cotswolds owes its fortune to a flock of pigeons and a savvy farmer, who attributed the birds’ fine health to drinking from a chalybeate spring.

William Mason started charging locals to drink the iron salt waters and by the time King George III arrived to sup at the spa on the advice of his doctor, Cheltenham was one of the most desirable health resorts in Britain and had adopted the much maligned pigeon as its mascot. 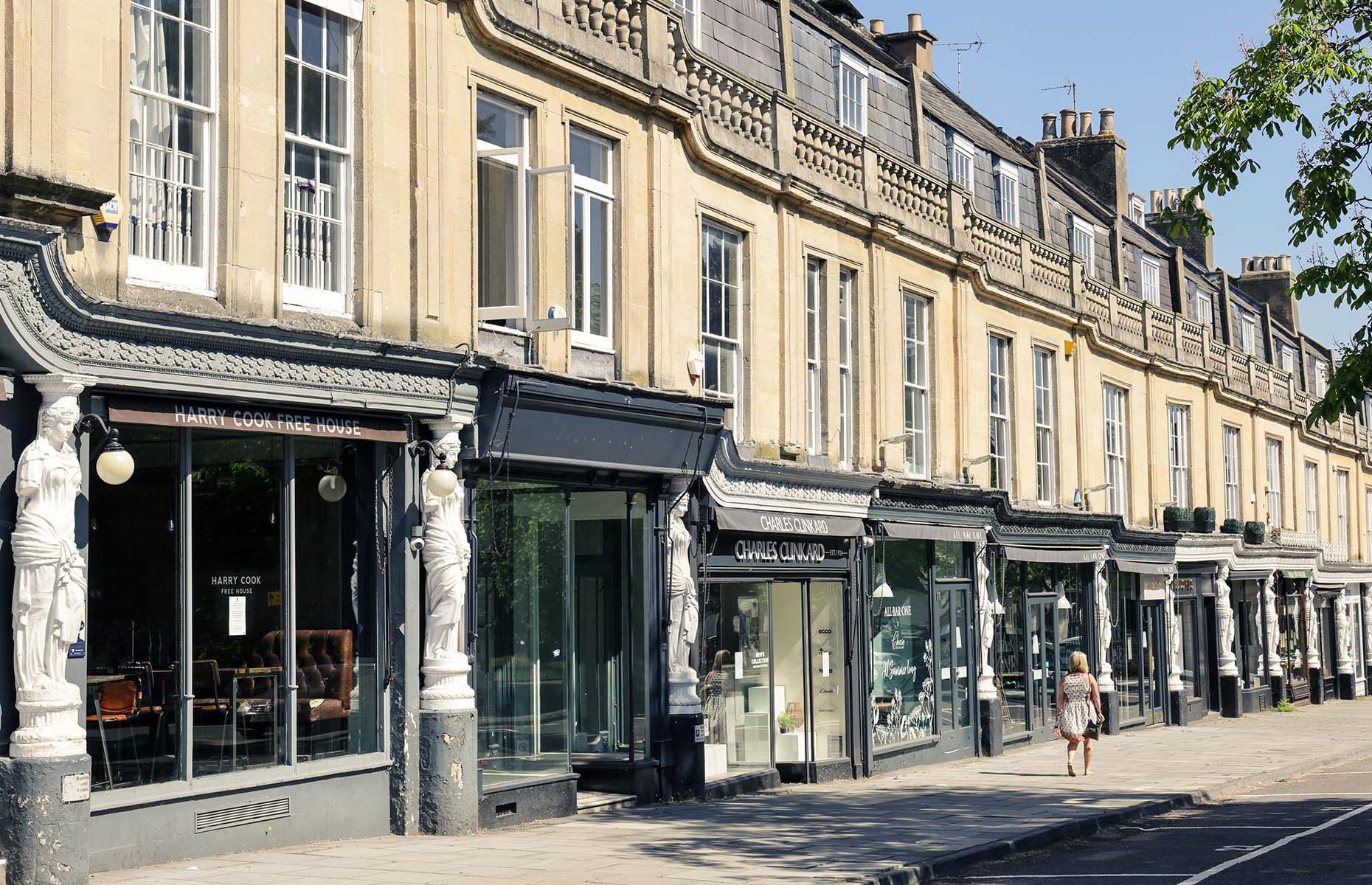 Some 300 years on, only the train station still bears the name ‘Spa’ but the Gloucestershire town continues to draw a diverse crowd thanks to its buzzing calendar of events, including four prestigious festivals – Jazz, Science, Music and Literature. The home of intelligence and security agency GCHQ is a passionate horse town too. Cheltenham Racecourse is renowned for its jump racing, with the high point of its season being The Festival in March, a four-day meeting culminating in the Cheltenham Gold Cup, a favourite of the Queen.

Cheltenham makes for an ideal weekend trip any time of the year. It’s compact and easy to navigate on foot, with plenty to delight any interest. The centre is split into four distinct areas for you to explore – peaceful Pittville with its beautiful parkland and houses, buzzing shopping and culture zone High Street, Continental Montpellier and chic neighbourhood The Suffolks.

READ MORE: Your guide to the glorious Cotswolds

Check in to: Queens Hotel. Perfectly located at the south end of the Promenade, overlooking Imperial Square and Gardens, this was one of the first purpose-built hotels in Europe. It opened its doors in July 1838 and was named in honour of Queen Victoria, whose coronation took place the same year. Its beautiful Palladian façade has the wow factor, while still remaining comfortable and relaxed inside.

If you’d prefer a self-catered option, there are plenty of stylish Airbnbs within a short walk of the centre. The Suffolks is ideal, with its boutique shopping and independent bars. Here you'll also find two Michelin-starred eatery Le Champignon Sauvage and former Art Deco cinema-turned-restaurant The Daffodil, which was renovated by Laurence Llewellyn Bowen.

Explore: Cheltenham town centre. From Montpellier Gardens, go north along Montpellier Walk and The Promenade for a mix of restaurants, bars and shops – and on the second and last Fridays of the month, Cheltenham Farmers Market takes place from 9am until 2pm. You’ll also spot the town’s most iconic Regency feature – The Caryatids, columns made to look like armless ladies. Don’t forget to stop for a photo by The Neptune Fountain outside the Municipal Buildings, said to be a tribute to the Trevi Fountain in Rome.

At the northern end, turn onto High Street, home to chain and department stores like John Lewis and the Brewery Quarter, which has restaurants, soft play, bowling and a cinema. Take a peek at Royal Crescent, the town’s earliest Georgian terrace, built as lodgings for spa visitors. 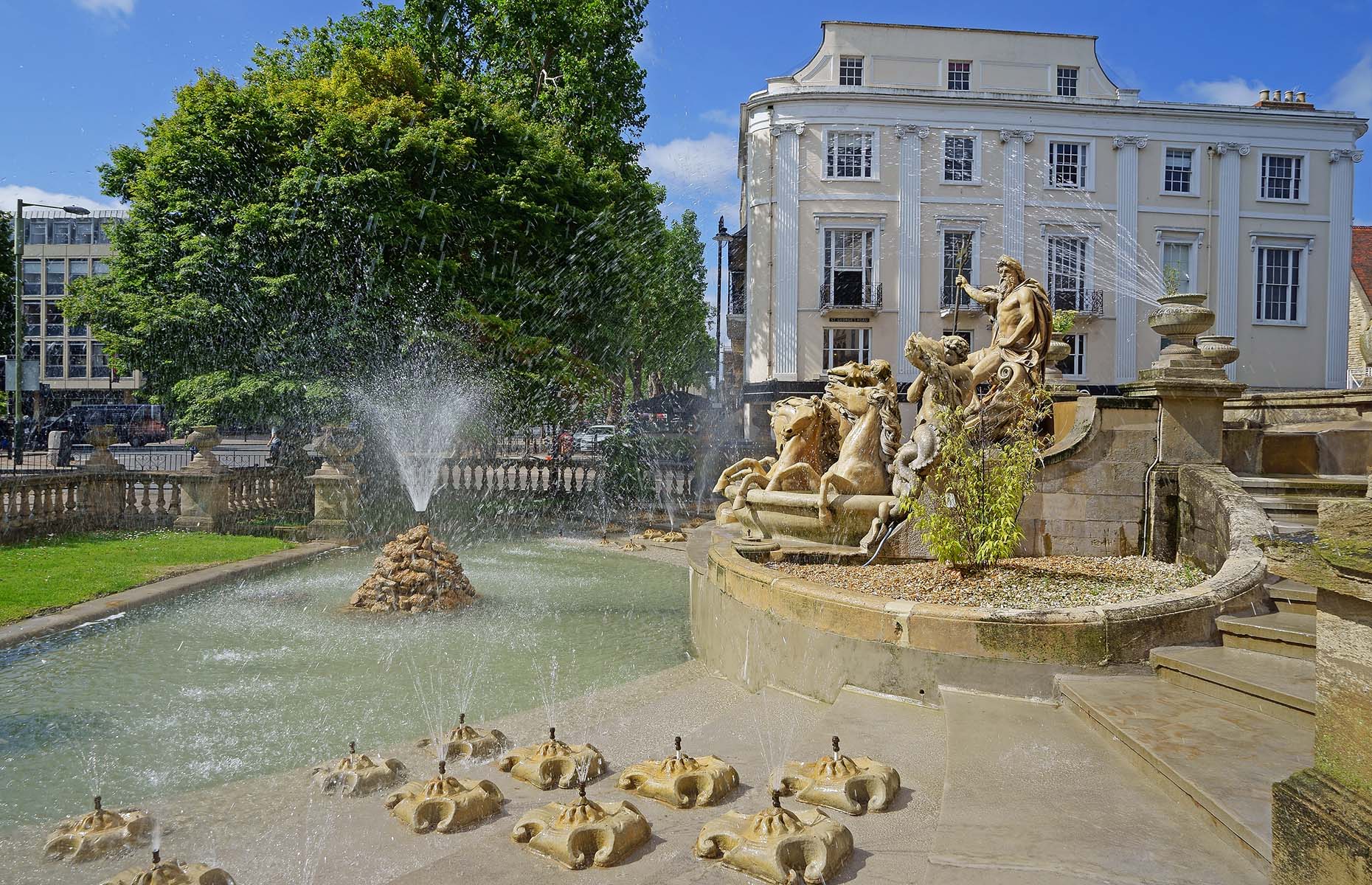 Eat at: The Coconut Tree, a buzzing Sri Lankan street food spot started by a group of Sri Lankan friends in 2016. The menu is a mix of small plates and larger options, with ample choice for diners with dietary restrictions. The hoppers, cheesy colombo and pineapple curry are especially delicious. Treat yourself to a ‘Cocotail’ too – all served with added Sri Lankan flavours and flare, particularly the Sriki-Tiki, a mix of rum, lime and tropical fruits, served with flaming cinnamon. 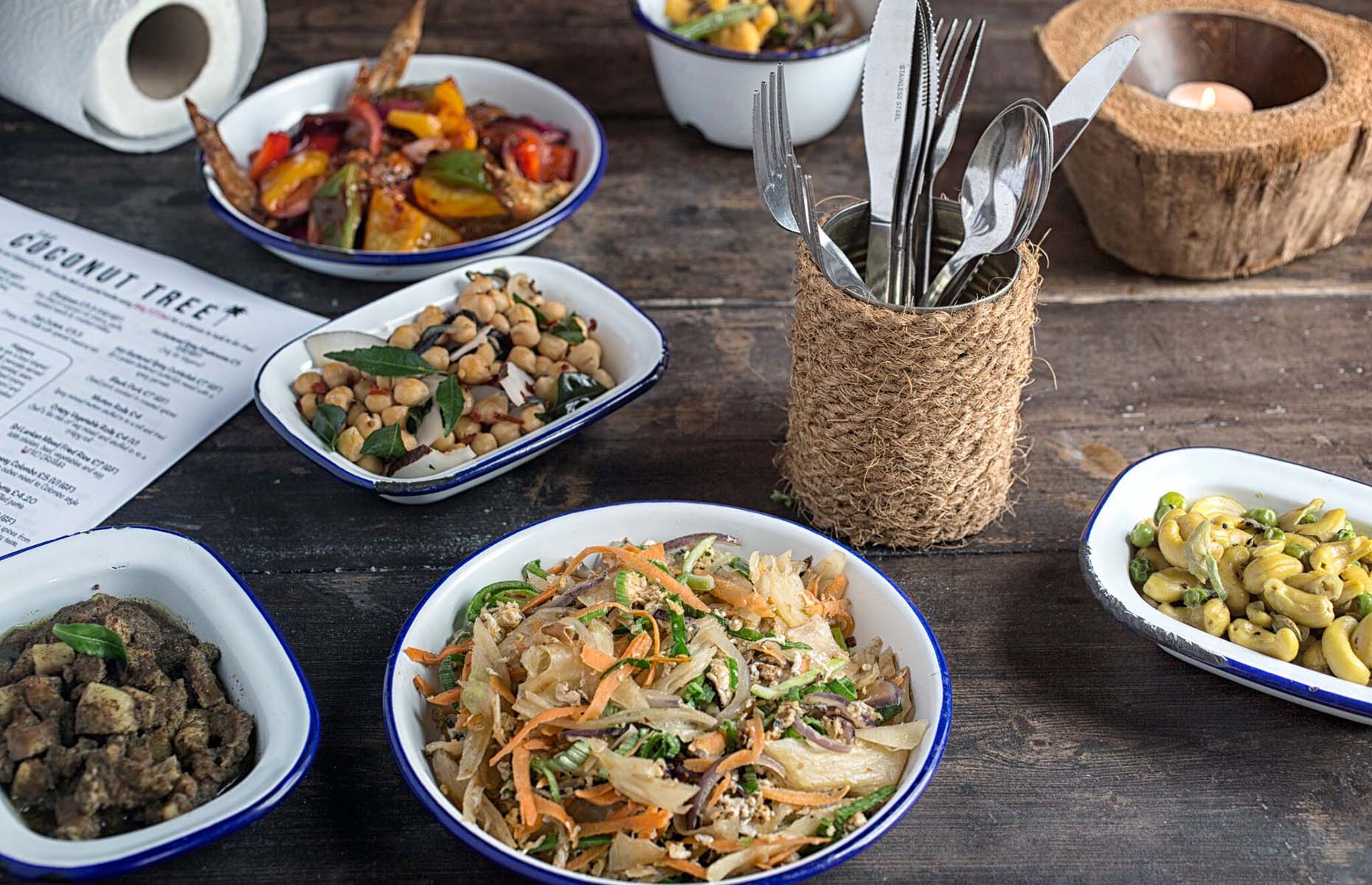 Courtesy of The Coconut Tree

See a show: Live entertainment is in plentiful supply in Cheltenham year-round, not just when the festivals are on. Everyman Theatre is a grand spot for a show, with its ornate auditorium the work of celebrated Victorian theatre designer Frank Matcham, while Cheltenham Playhouse is a more intimate community theatre, housed in a 200-year-old bath house.

Cheltenham Town Hall, built at the turn of the 20th century to host balls and concerts, has a busy programme of music, comedy, dance and family events in its marble-pillared main hall, plus a garden bar overlooking Imperial Square and Gardens. This area was originally planted for use by visitors to Sherbourne Spa, where Queens Hotel now stands, but today it is the base of the town’s festivals and hosts an ice rink in winter.

Grab a nightcap at: Gin & Juice at No 131 The Promenade has a renowned cocktail list and DJs playing into the wee hours on Fridays and Saturdays.

READ MORE: What to see and do in Bath

Eat breakfast at: Clementine. This relaxed, seasonally focused café is housed in a former butcher shop from the Regency period that retains its original white and green tiles and wooden cashier’s booth. It’s open seven days a week for breakfast and serves a generous smoked salmon and scrambled eggs. They also stock gelato from local Cotswolds company Milk Bar.

Take a dip at: Sandford Park Lido. This 1930s gem in Sandford Park was saved by locals 25 years ago. Unlike its inter-war contemporaries, this open air pool has a classical architectural style and the rare luxury of heated water. Outside of its summer season, it opens for cold water swimming at selected times on Wednesdays, Saturdays and Sundays.

Take a tour: The Cheltenham Promenaders run themed walking tours delving into the cultural and foodie history of the town, from its links with India to the famous writers who visited. The Regency Tea Tour and Curry & Colonels Tour both end with treats at Memsahib Gin & Tea, named after the Anglo-Indian women who settled in Cheltenham during the British Raj period.

Get a culture fix at: The Wilson. Cheltenham’s main art gallery and museum has a vast Arts and Crafts Movement collection and a First World War archive, along with watercolours by its namesake and local lad, the Antarctic explorer and artist Edward Wilson. Closed for redevelopment in 2021, it is scheduled to reopen in spring 2022 with a new arts café and community gallery.

Sip a pre-drink drink at: Imperial Haus is a boutique cocktail bar on the corner of Imperial Square with a dramatic enchanted décor – book ahead to guarantee a table. Alternatively, independent wine and spirit merchant John Gordons serves a large list of whiskey, gin and wine, with the knowledgeable staff happy to advise on the perfect tipple. Sit inside the cosy bar or the fairy light-strewn covered terrace outside.

Dine at: Sam’s Montpellier, a new British brasserie cooking up small plates on the themes of Earth, Land and Sea. The menu focuses on seasonality and is designed to be enjoyed by all, meaning it is brimming with choice for vegans and diners with allergies. The pistachio parfait is a standout as is the restaurant’s signature cocktail elderflower martini. 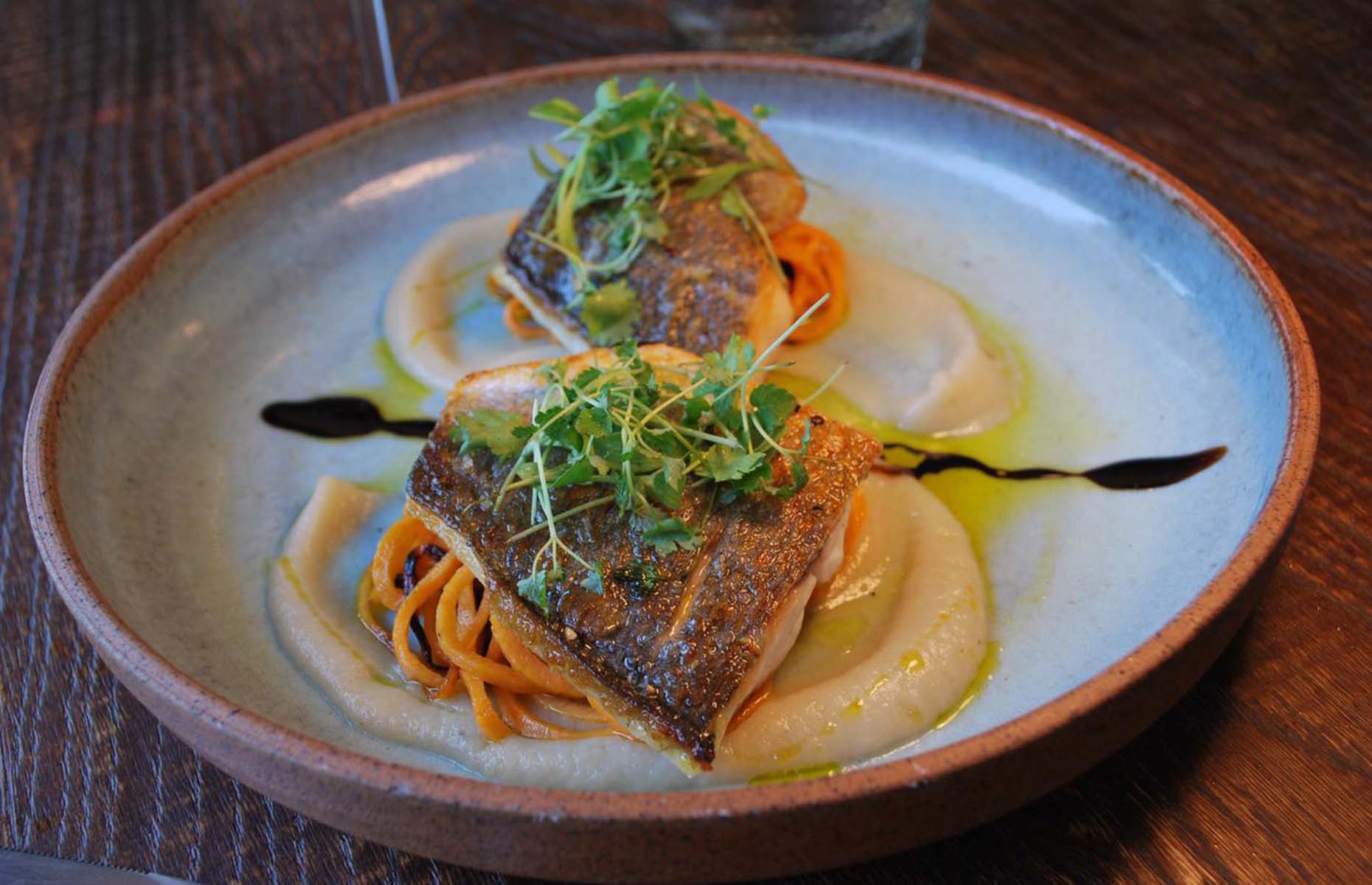 Have one for the road at: Kibou. This hip Japanese restaurant and bar has an extensive list of inventive cocktails, whisky and sake, with a dramatic décor that screams late night drinking den. The menu of ramen, udon noodles, tempura and sushi also makes this a delicious spot for lunch or dinner.

READ MORE: How to spend a weekend in Harrogate

Head outdoors: Pittville Park is an urban oasis that dates back to 1825 and is split into two halves. The western side centres around a boating lake and has a more natural feel, with wooded areas and The Boathouse Café, where you can grab a coffee, hire rowing boats or clubs for pitch and putt. 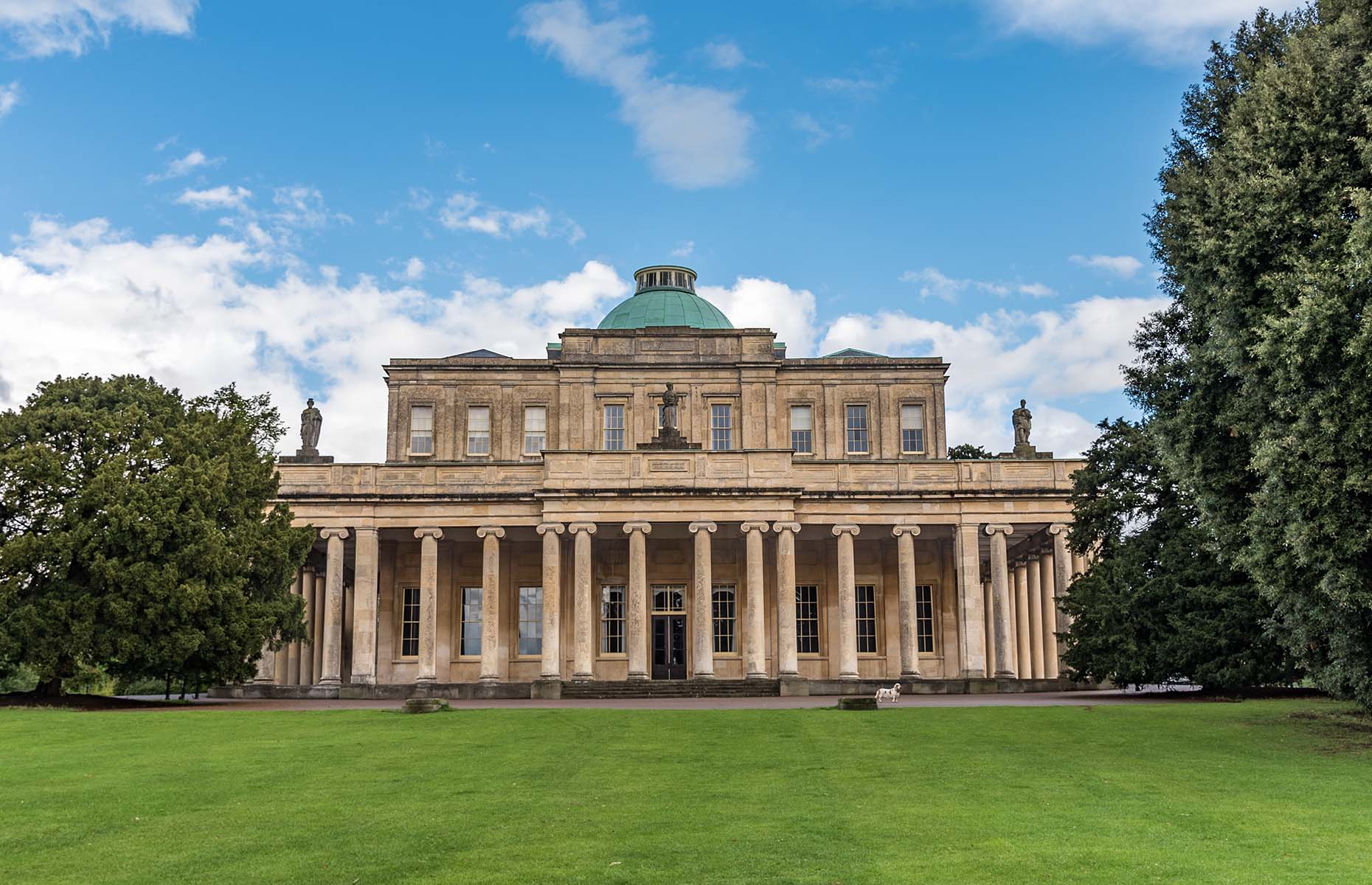 The eastern side offers a top-notch children’s play area with an aviary and is home to Pittville Pump House. This Grade II-listed building overlooking the lawns is a handsome reminder of how the town came to prominence thanks to its spa waters. Visitors are welcome to go into the dome ceiling ballroom if no private or ticketed events are on and follow the immersive Heritage Trail and accompanying audio commentary.

The spa waters – said to be an acquired taste – will also be available to try once work on a new pump has been completed. If you’d prefer a coffee, the Heritage Deco Café in the orangery next door is popular with dog walkers thanks to its terrace facing the lake.

Step back in time at: Holst Victorian House. The birthplace of Cheltenham’s most famous son, composer Gustav Holst, has been preserved in time so visitors can get a flavour of his childhood and life in the late 1800s. Original ceiling decorations and wallpaper add to the atmosphere, and you can also see the grand piano on which he wrote The Planets. The house hosts a year-round programme of music, craft and historical events too.

Eat a late lunch: You’ll be spoiled for choice on Regent Street, which is lined with independent eateries. Cicheti serves top quality cheese and meat platters accompanied by a fine wine list, while Woodkraft is an upmarket cafe owned by Masterchef winner Simon Wood. The Find is a buzzing modern coffee house, serving its own Formula Find blend, indulgent cakes and all day brunches.

If you’d prefer a pub, Sandford Park Alehouse is an award-winning boozer with a suntrap beer garden while the locals flock to The Retreat on Suffolk Parade.

Cheltenham Spa railway station is a mile outside of town and is served by both Great Western Rail, Arriva Trains Wales and Cross Country. There are direct services from Aberdeen, Newcastle, York, Leeds and Derby in the north and Plymouth and Penzance in the south. There are also trains from London, Cardiff, Nottingham and Gloucester. Find out more at visitcheltenham.com.