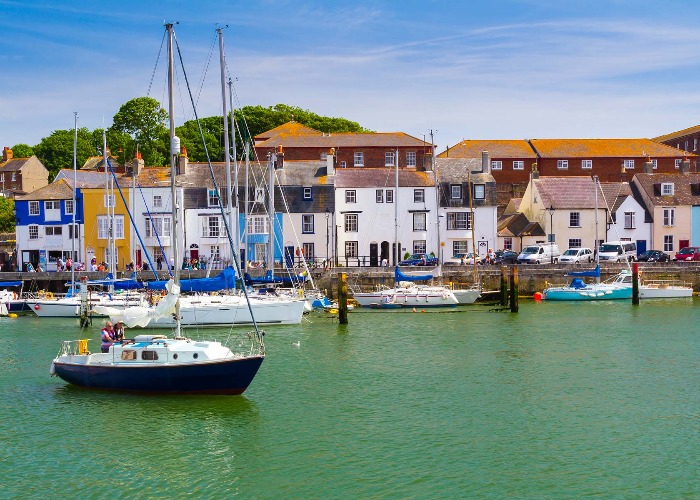 With its world-class beaches, buzzing towns and ample attractions, there’s a holiday for everyone in this south coast county.

If you’re craving a British break, there are few parts of England that outshine Dorset – quite literally. This southwest corner averages 350 more hours of sunshine a year than other parts of the UK and enjoys a mild maritime climate that means it's pleasant even in winter. But the weather isn’t the only draw.

READ MORE: The best beaches to visit in Dorset

For an action-packed break: Bournemouth

Described by Thomas Hardy as “a Mediterranean lounging place on the English Channel”, Bournemouth combines British seaside culture with a Continental mix of alfresco dining and arts.

The birthplace of the beach hut, it has seven miles (11km) of Blue Flag sand and two historic piers, which can be viewed from Russell-Coates Art Gallery and Museum. This exotic clifftop Victorian villa was a birthday gift from Merton Russell-Coates to his wife in 1901 and is filled with their fine art collection. 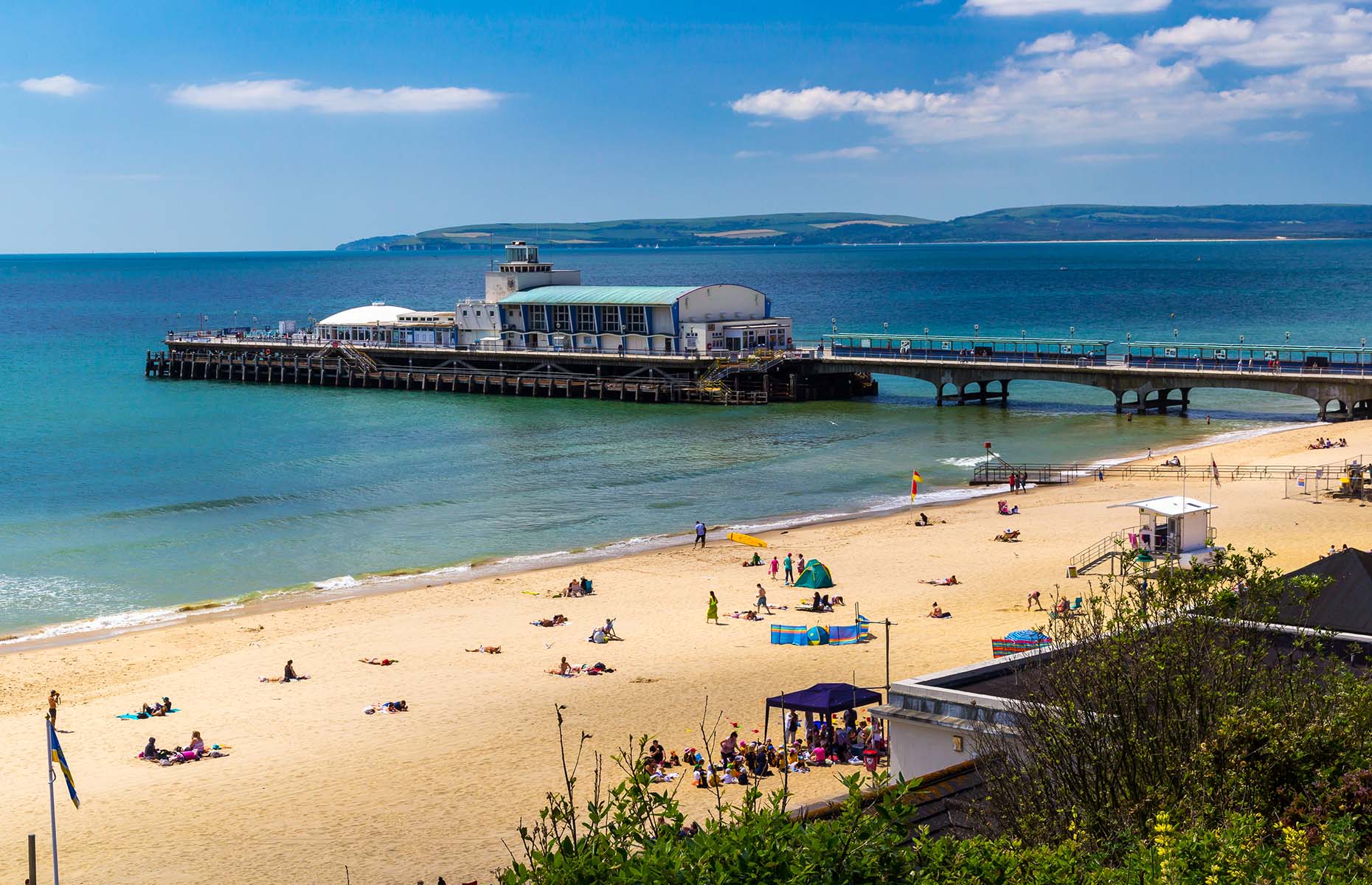 Environmentally conscious boutique hotel The Green House is a sustainable but luxurious base for your stay, while The Orchid Hotel combines period features with comfortable design. NEO, a beachfront bistro, charms with views as delicious as the food, while Picnic Park Deli serves up outdoor live music, fitness classes and family fun alongside its lunch and brunch offering.

READ MORE: A family weekend in Bournemouth and Poole

For diving and seaside delights: Swanage

This former fishing town on the Isle of Purbeck – a lush peninsula rich in wildlife and geology – has a relaxed, local feel. The mile-long (1.6km) beach is sheltered and gently shelved, with spots for crabbing around the quayside and two crazy golf courses at Santa Fe Fun Park. 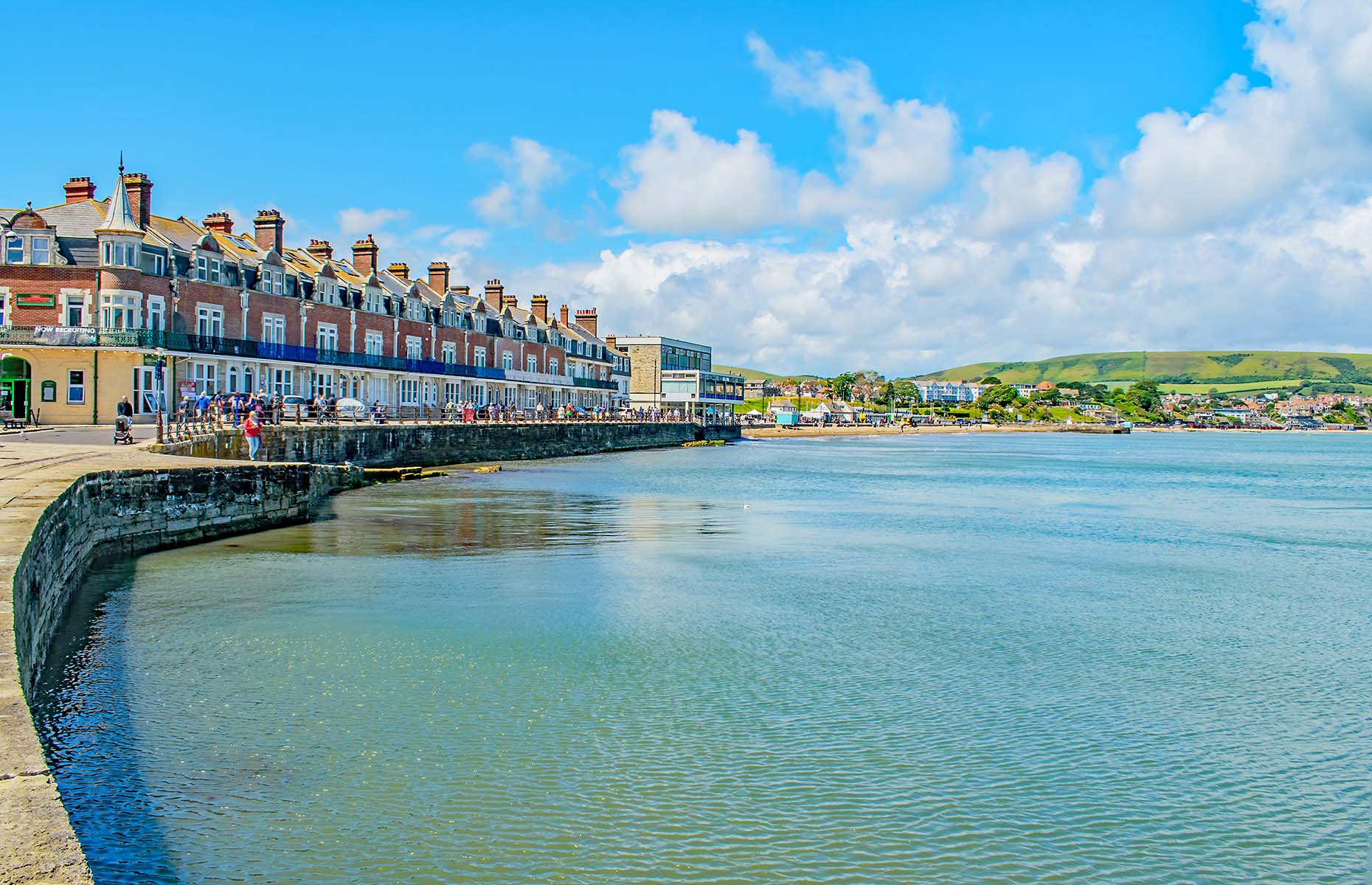 A saunter along Swanage Pier, built in 1895 for passenger steamers, offers panoramic views of the bay and is also a first-class scuba spot, home to Britain’s first dive school – Divers Down. Refuel at The 1859 Pier Café & Bistro, which serves breakfast through to dinner.

Swanage has a wide choice of self-catered accommodations, including the dramatic Clarence Cottage with four bedrooms, a manicured garden and sea views, while the Grand Hotel is a classic Victorian bolthole on the coast, looking towards Peveril Point.

For natural and man-made wonders: Christchurch

You don’t have to choose between countryside and coast in Christchurch. The town has six beaches with views across the Solent but is also bordered by the New Forest National Park. There’s a stunning natural harbour which is a haven for birds, while the Stour and Avon rivers are a paddleboarder’s dream.

History is around every corner on the cobbled Saxon streets too. Christchurch Priory is one of the longest parish churches in England with a central nave spanning more than 300 feet (91m) and is overlooked by the ruins of the 11th-century Christchurch Castle, which was built to protect it. Highcliffe Castle is a more recent addition – a lavish piece of Romantic architecture with grounds designed to rival Kew Gardens. 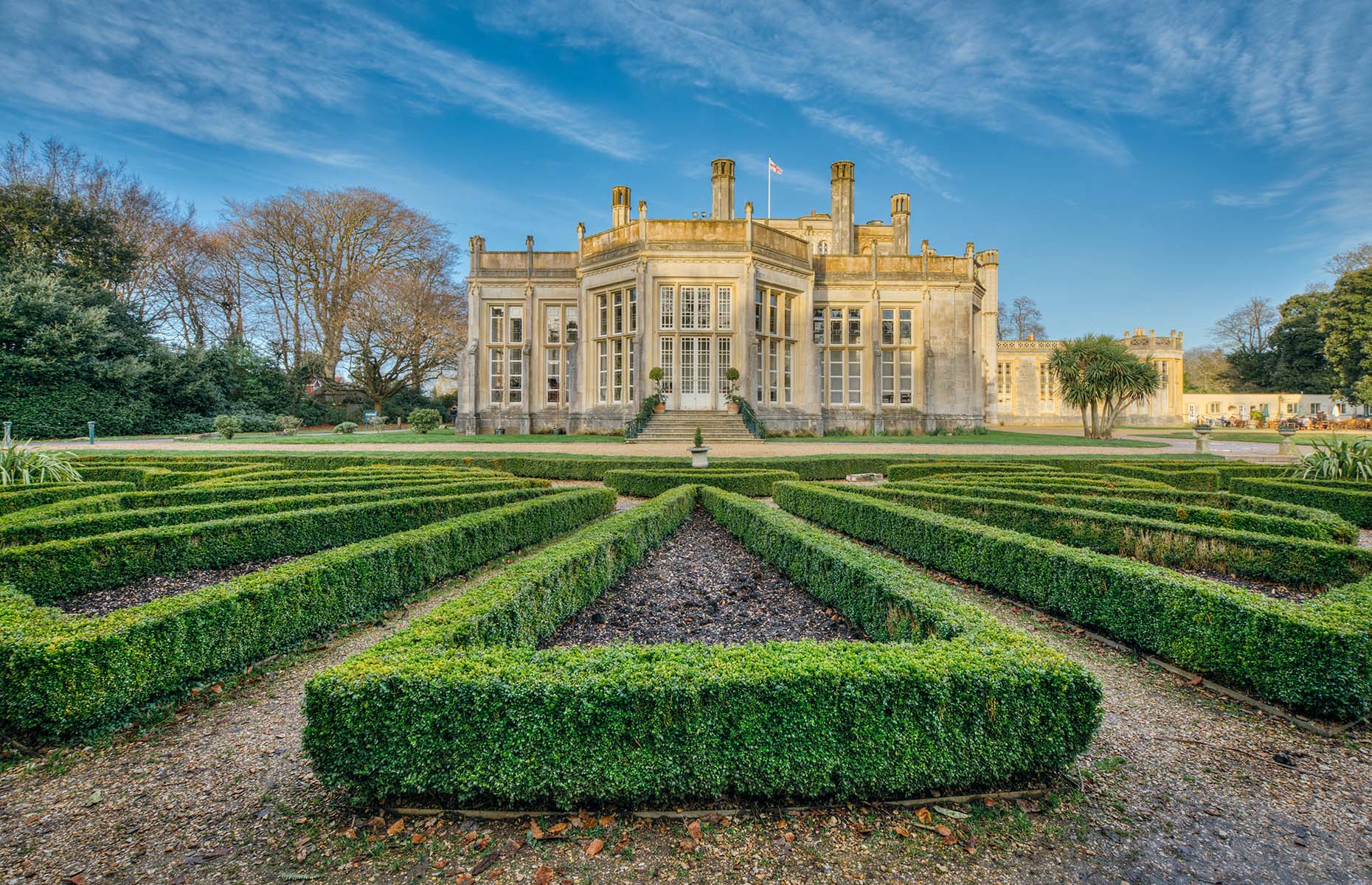 Christchurch is also famed for its cuisine, with a thriving dining scene and an annual food and wine festival. Captain’s Club Hotel & Spa has an award-winning restaurant overlooking the boats on the Stour and comfortable, nautical-themed rooms.

For fossils and fish: Lyme Regis

Dubbed the Pearl of Dorset, Lyme Regis and its tangle of streets have a fascinating history. The area is famed for its fossils and was the birthplace of trailblazing Georgian palaeontologist Mary Anning, who you can learn about at Dinosaurland Fossil Museum and Lyme Regis Museum. 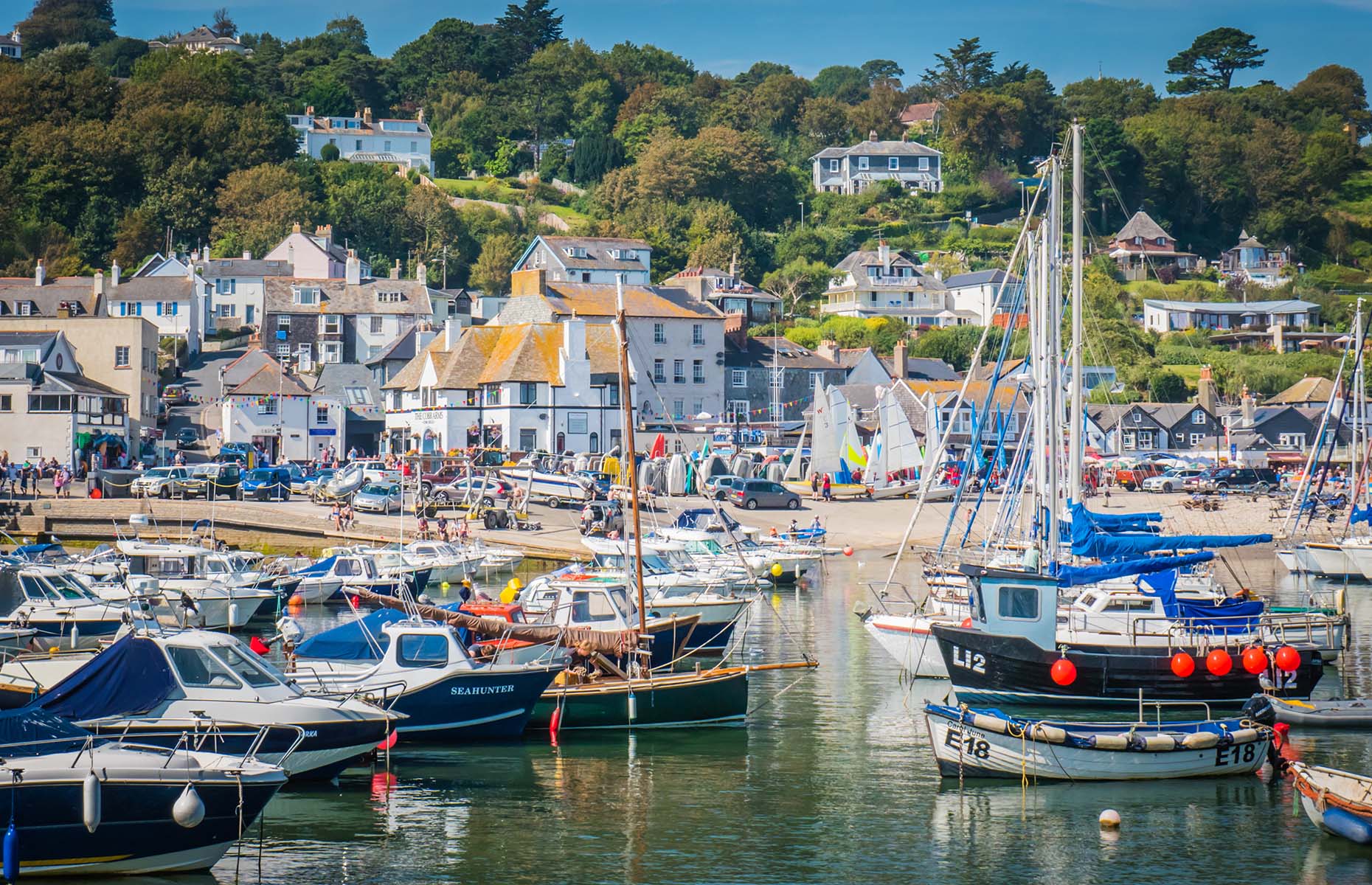 The harbour wall is known as The Cobb and dates back to 1328, although it has washed away in multiple storms through the centuries. Author Jane Austin featured it in Persuasion after holidaying nearby and a stroll along its length offers wonderful views of Lyme Bay. 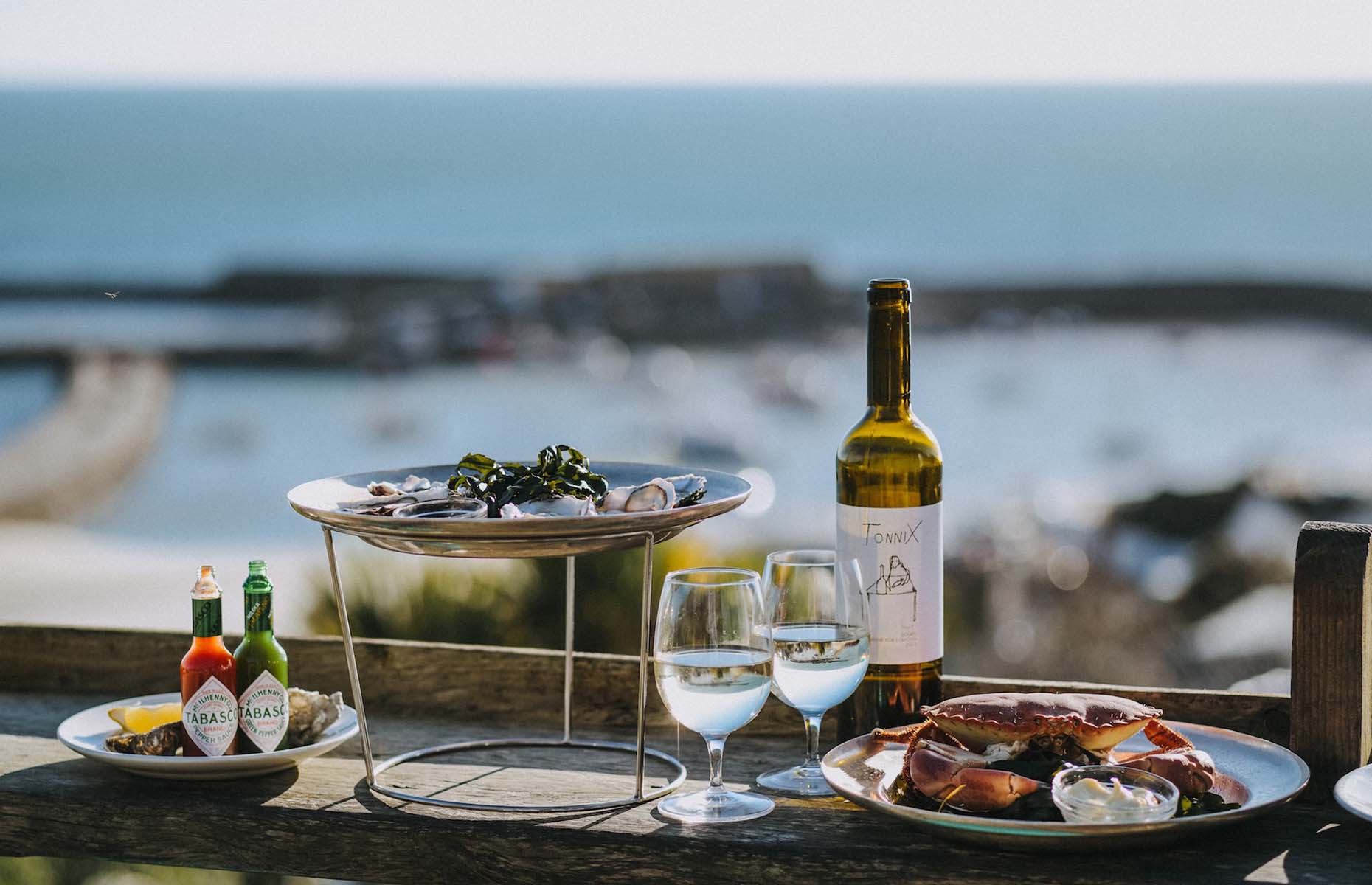 For beaches and bistros: Weymouth

Weymouth won the royal seal of approval in Georgian times and remains a strong contender for the crown among Britain’s seaside towns. Head to its gently sloping beach for quintessential thrills like donkey rides, sandcastle building and pedalos.

The buzzing harbour area has the feel of Normandy rather than Blighty as you dine on the waterfront while ships sail by. Bennett's is a top spot for battered cod and chips, or enjoy a more refined seafood experience at Les Enfants Terrible, which also has a cooking school. Stay at Grade II-listed The Roundhouse, once home to aristocracy, which has spectacular views from its curved windows. 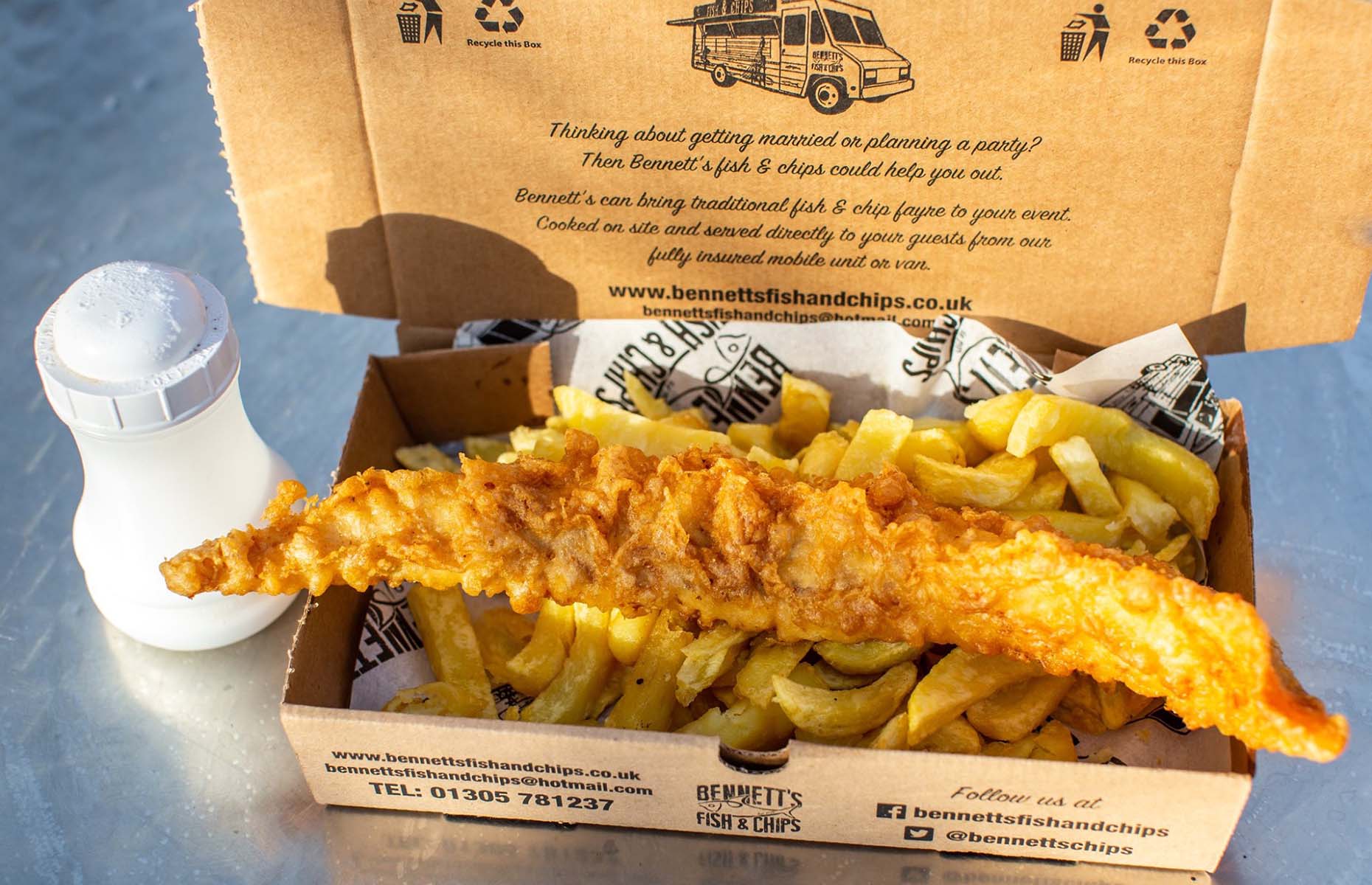 For antiques and architecture: Sherborne

This medieval market town built from honey-hued hamstone is one of England’s prettiest places and a treasure trove of independent shops, tea rooms, antiques dealers and delis. You’ll find the best spots to shop and eat around Cheap Street, which also hosts Pannier Market on Thursdays and Sundays.

The town has 378 listed buildings, including Sherborne Abbey with its famed fan-vaulted roof. It was once the place of worship of Sir Walter Raleigh, who leased the 12th-century Sherborne Old Castle and resided in the neighbouring Tudor mansion Sherborne Castle, until King James imprisoned the adventurer and sold the estate to Sir John Digby. 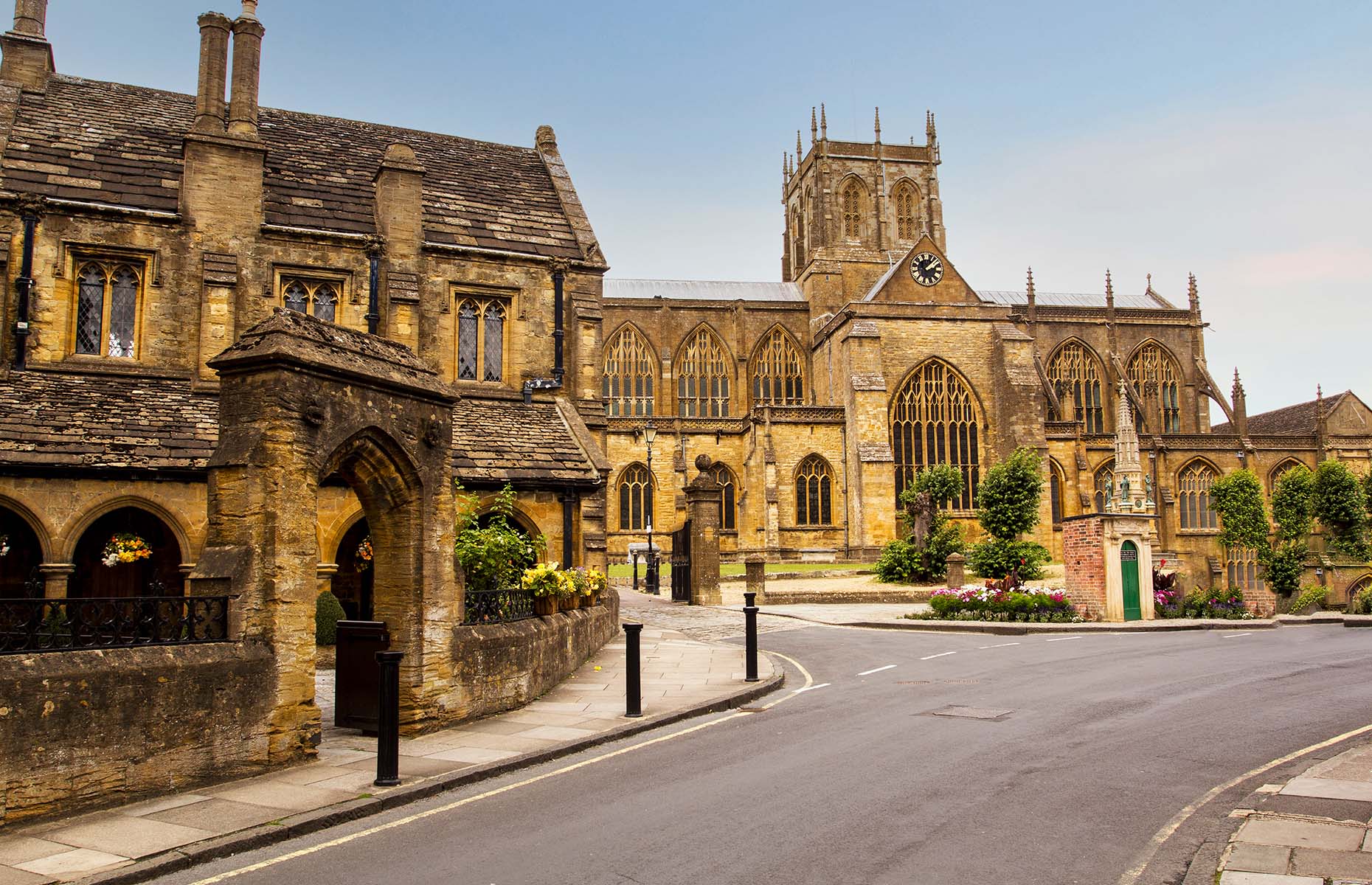 Georgian townhouse The Eastbury Hotel is a stylish and comfortable base that welcomes dogs, and has a spa and chic restaurant.

With its grey limestone houses framing the square and the castle ruins that dominate the skyline, Corfe Castle is the stuff of picture postcards. But behind the pretty façade is a village with a long and significant history, which you can discover by visiting the National Trust-managed fortress. 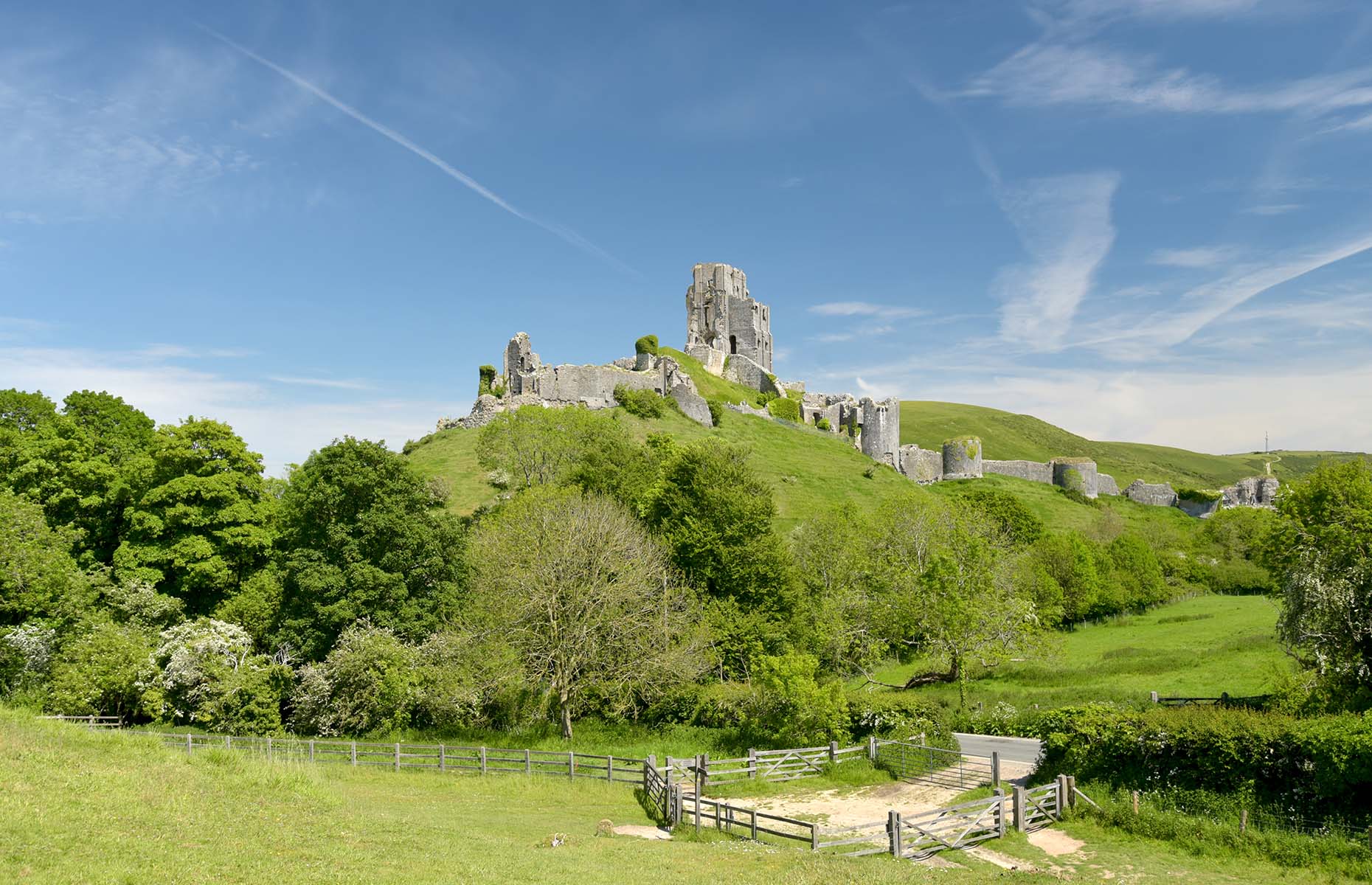 There’s also a detailed Model Village that depicts Corfe before the English Civil War or visitors can travel back to the days of steam trains by boarding Swanage Railway. Stock up on sherbet lemons for the journey at the quaint Corfe Castle Sweet Shop.

Later, watch the vintage trains chug past with a pint outside The Bankes Arms, a 16th-century inn with bedrooms, that serves sophisticated pub grub. A quieter option is Burnbake on the nearby Rempstone Estate, which has a peaceful campsite and luxury wooden lodges set within pine woodland. 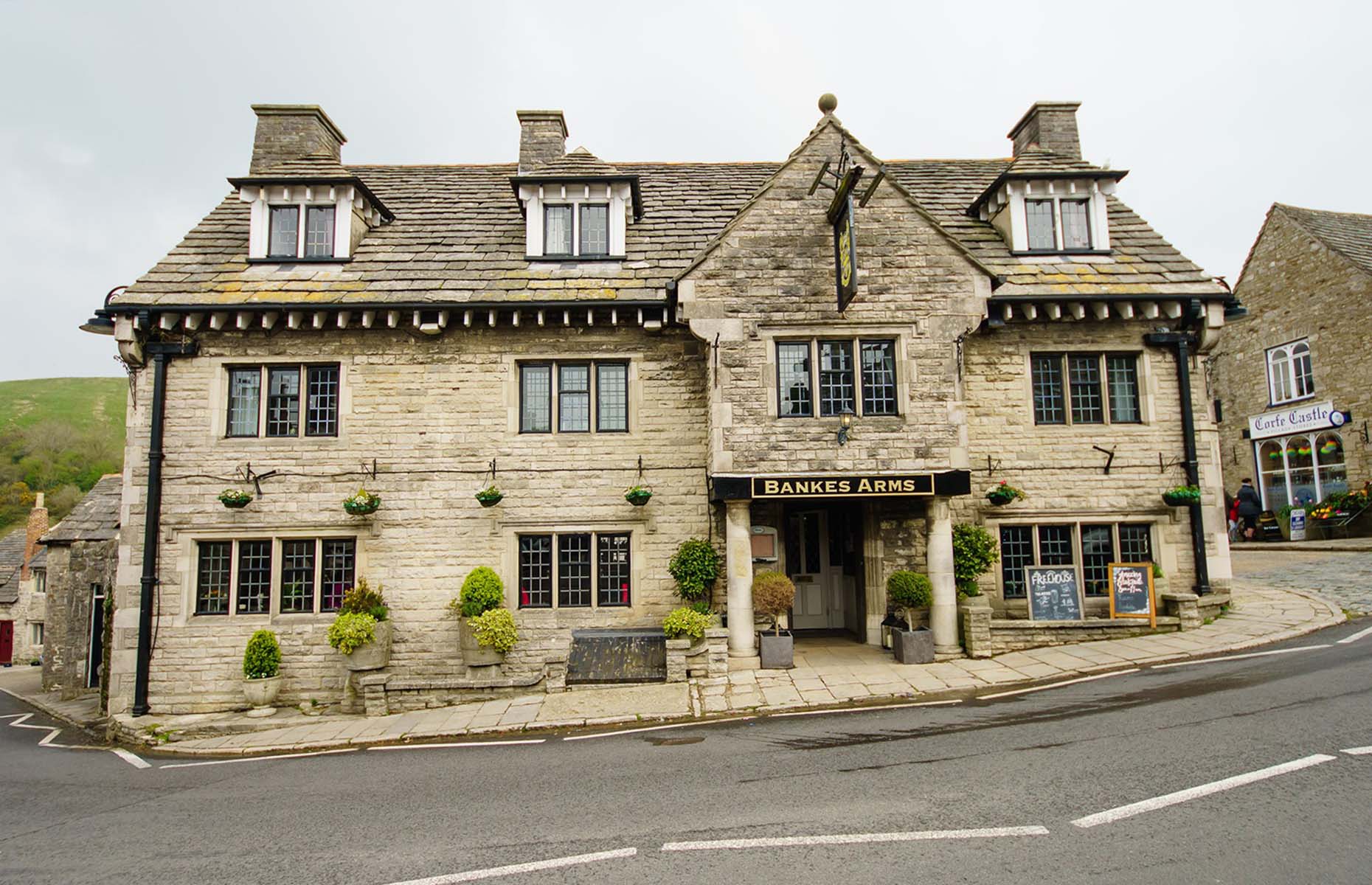 Home to Europe’s largest natural harbour, Poole has a proud maritime history and plenty to please watersports fans, birdwatching enthusiasts and pirate-loving kids. Don’t miss a boat trip to Brownsea Island, a red squirrel hot spot which hosted the first Scout camp in 1907 and has a National Trust-operated campsite.

Back on the mainland, Poole Museum in the atmospheric Old Town charts the town’s story and is home to 150 pieces of Poole pottery. You can also climb internationally-celebrated sculpture Sea Music by Sir Anthony Caro to take in the harbour views.

Dinner at The Poole Arms on the quayside is a must – it’s the town's oldest inn that serves an exclusively seafood menu. Afterwards, bed down at Harbour Heights Hotel near Sandbanks and be woken by the ultimate sunrise.