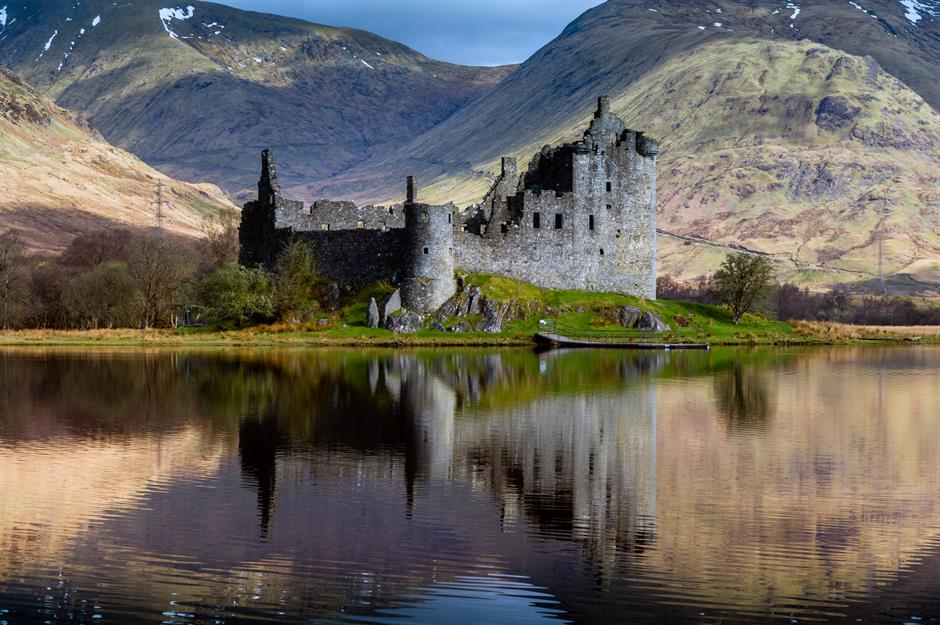 Rickforduk/Shutterstock
Once resplendent in strength, wealth and grandeur, many castles around the world have now fallen into ruin. From the Château de la Mothe-Chandeniers in France to Ha Ha Tonka in Missouri, USA, their haunting beauty remains a testament to the glories of the past. Here we bring you jaw-dropping pictures of majestic ruins from around the globe. 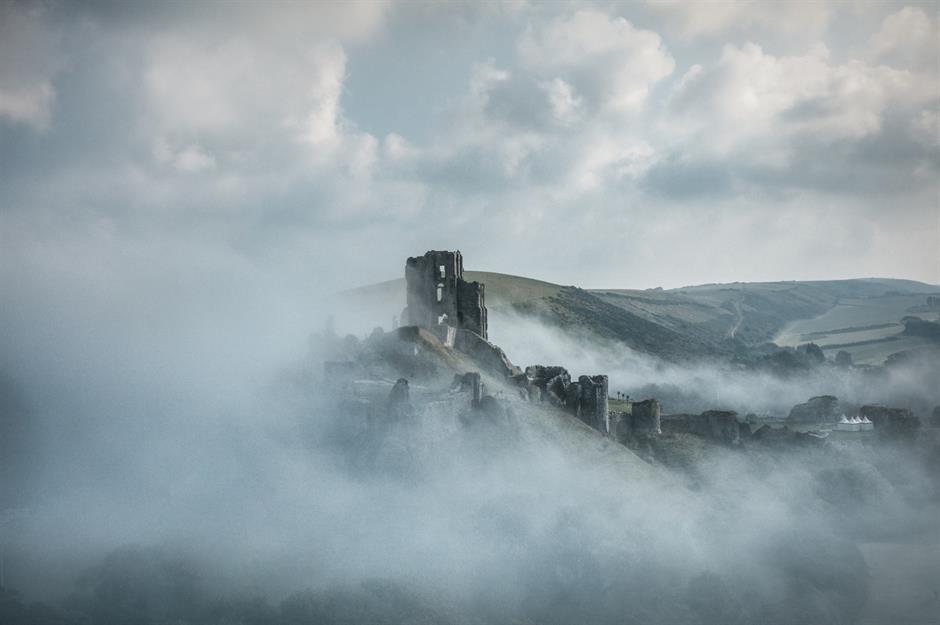 Michael Marsh/Historic Photographer of the Year
Corfe Castle, on the Isle of Purbeck in Dorset, has been a romantic ruin on the English landscape for 350 years. Built by William the Conqueror in the early 12th century, it's seen its share of horror. In the 13th century, Bad King John lived up to his name when he starved 22 Frenchmen to death in the dungeons. In 1572, Queen Elizabeth I sold the castle into private hands and it was bought by Sir John Bankes in 1635. 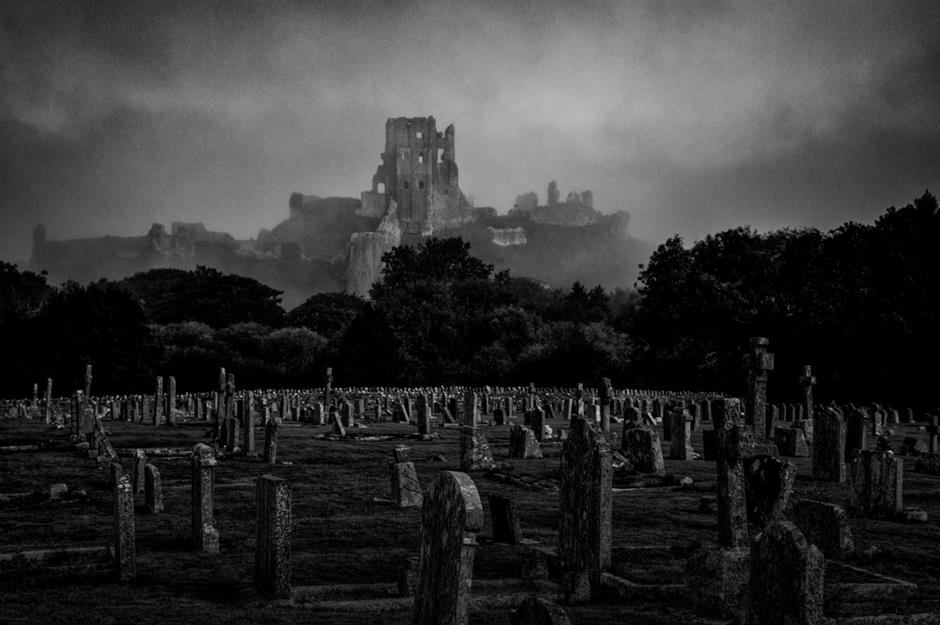 Michael Marsh/Historic Photographer of the Year
During the Civil War, the castle was besieged by Parliamentarian forces and after Sir John was killed, his widow Mary and her soldiers fought back against Cromwell’s troops from within. But when Lady Bankes was betrayed by one of her soldiers, the castle was destroyed in 1645. 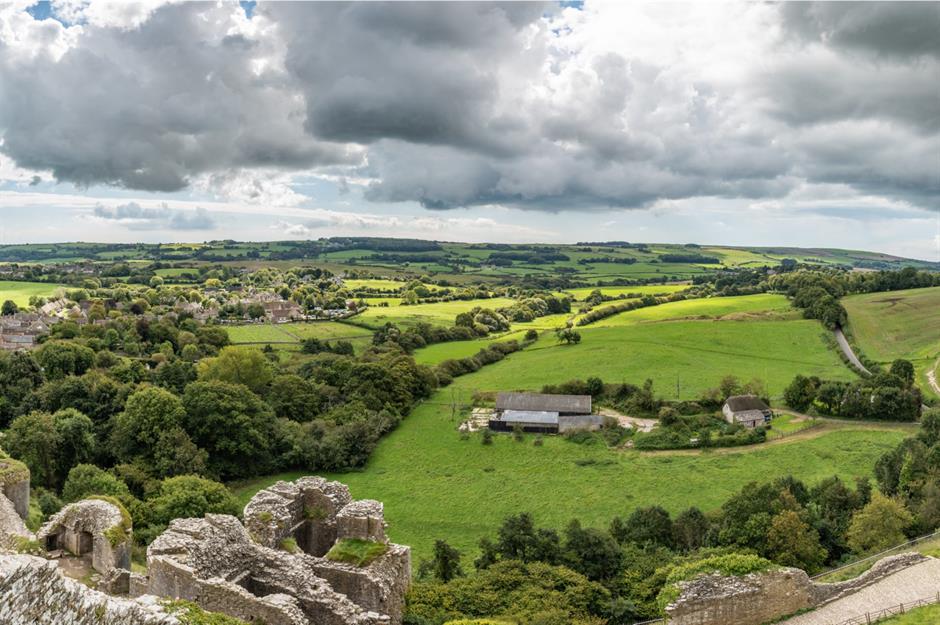 Tomasz Kowalski/Shutterstock
The Bankes family were given the property back when Charles II was restored to the throne but they never rebuilt it or lived there again. It stayed in the family until 1982 when it was given to the National Trust. 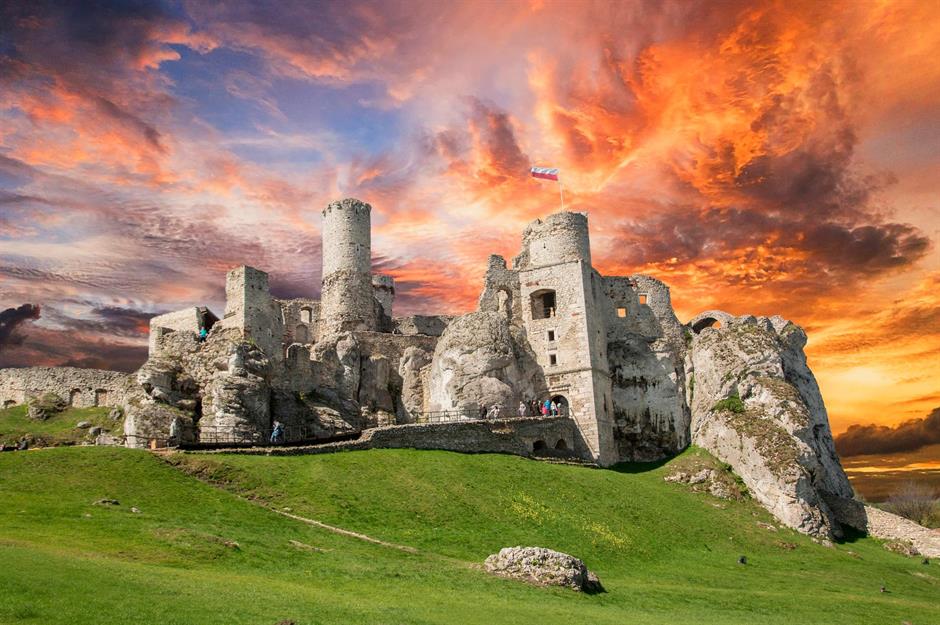 Krsysztof Mieszczanek/Shutterstock
Ogrodzieniec Castle was built in the 14th and 15th centuries in the southern highland region of Poland and the walls of this impressive fortress were incorporated into the surrounding rocks. Over the centuries it had been destroyed and rebuilt several times, but it was during Poland’s war with Sweden in 1702 that it would meet its final demise. 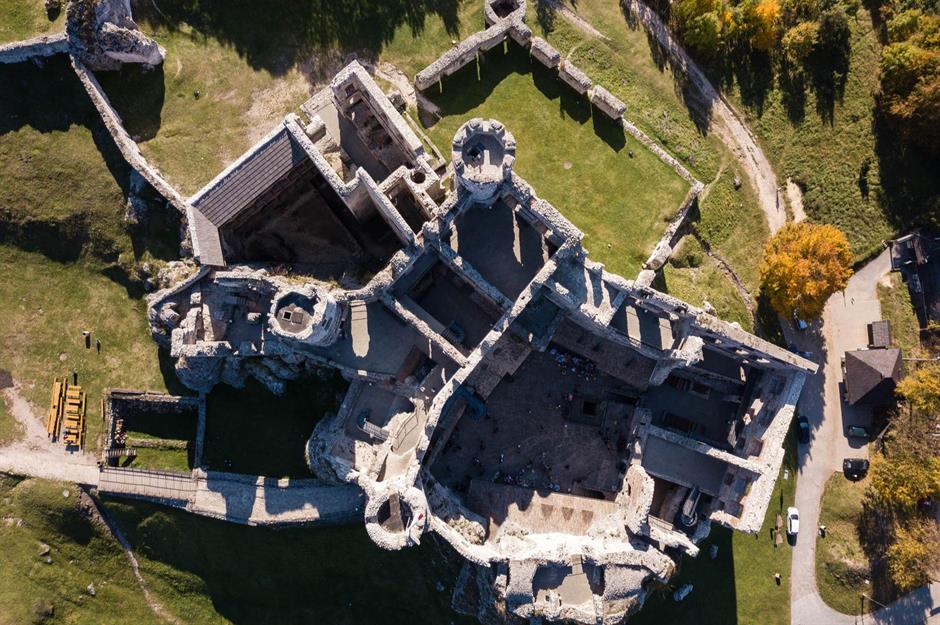 Barvista/Shutterstock
Enemy troops set the place on fire and the damage was such that it was never rebuilt. After the Second World War, Ogrodzieniec was taken over by the government and work started to preserve it. 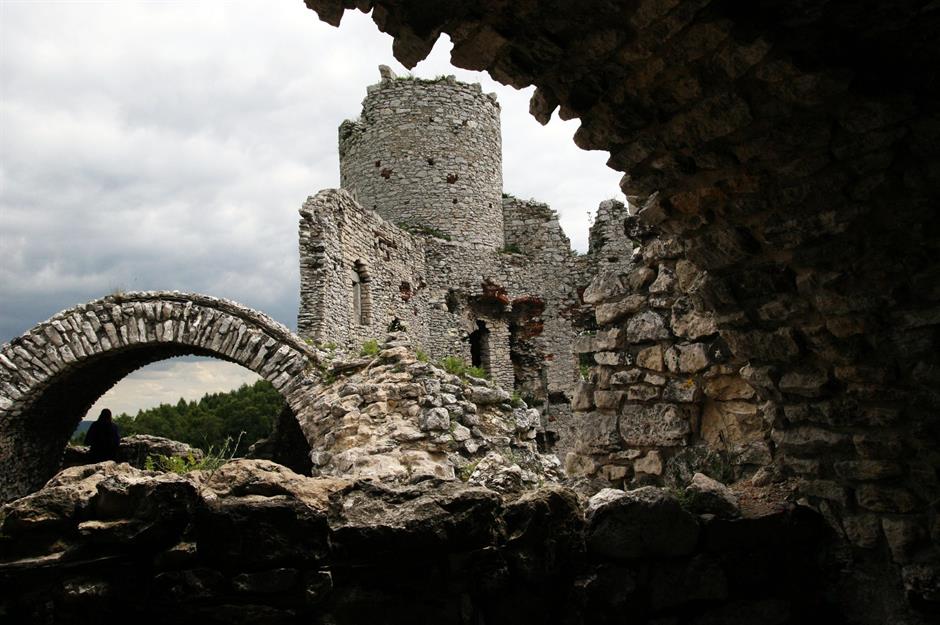 In 1973, the castle was opened to the public. It's only an hour’s drive from Krakow and worth a visit for its labyrinth of corridors and amazing views. If you love Netflix show The Witcher, based on books by the Polish writer Andrzej Sapkowski, you’ll recognise this magnificent castle featured in the series. 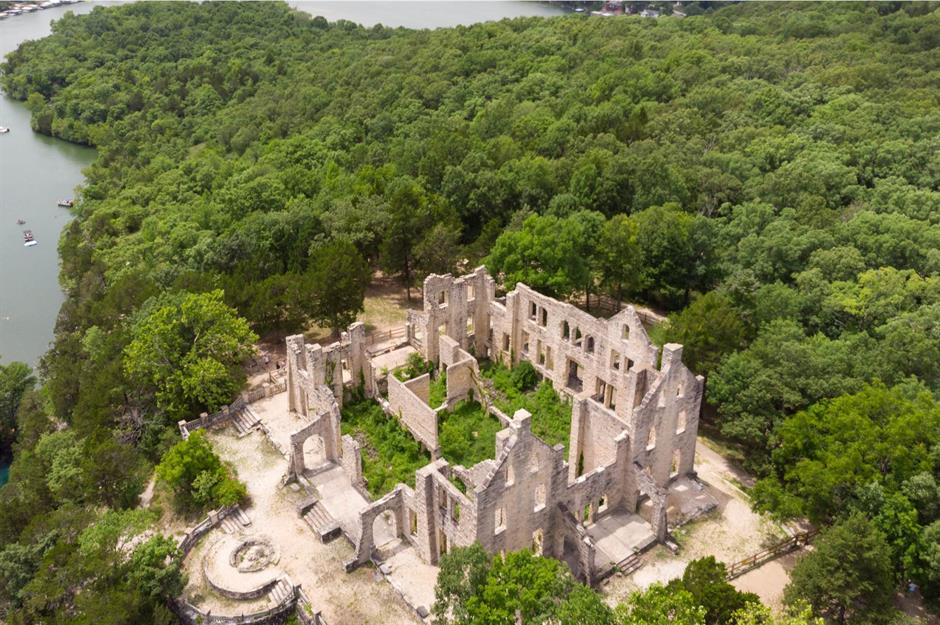 Eifel Kreutz/Shutterstock
Businessman Robert Snyder dreamt of building a European-style castle in Missouri and began work in Ha Ha Tonka in 1905. But a year later, Snyder had to be one of the unluckiest people around when he was tragically killed in one of the state's first car accidents. 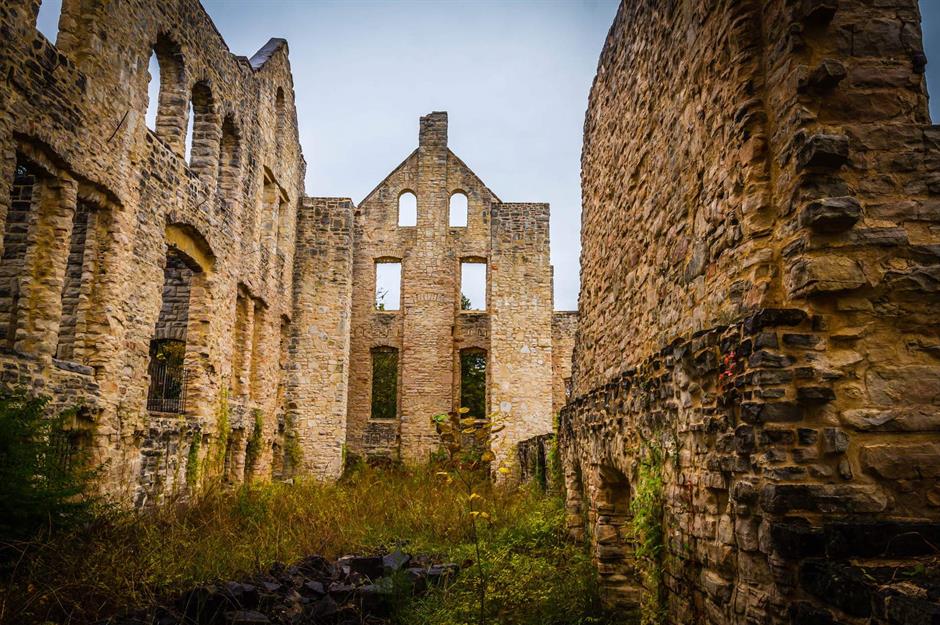 Kiwi Innovation/Shutterstock
After his death, Snyder’s sons continued construction and by the early 1920s, the castle was complete. However, during the Depression in the 1930s, the family business went into decline and in 1942 the castle was gutted by a fire. It was never rebuilt and lay empty and abandoned. 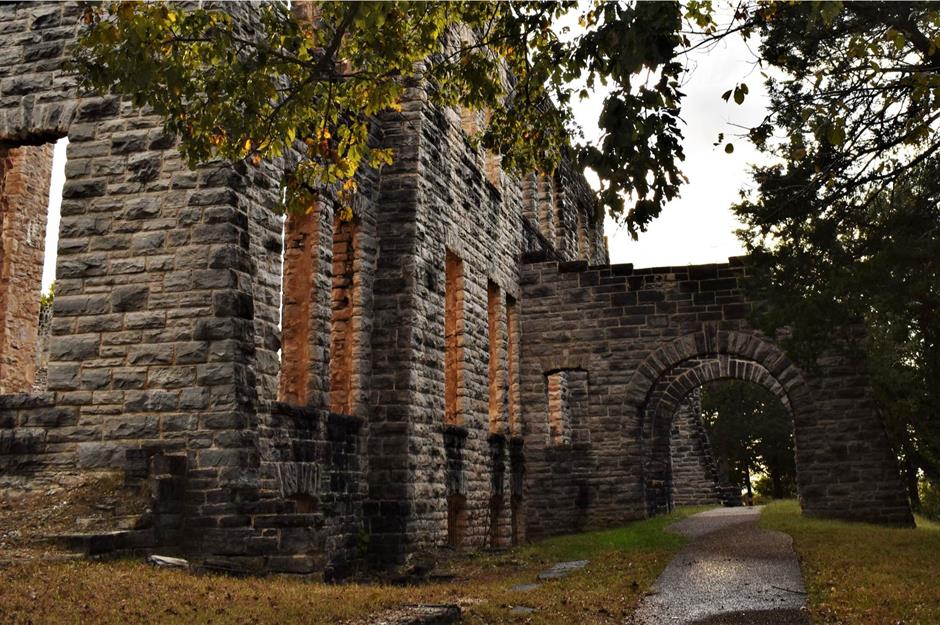 However, in the late 1970s, the state of Missouri bought the land and today the ghostly ruin has become a tourist attraction and a site for hiking and nature walks. 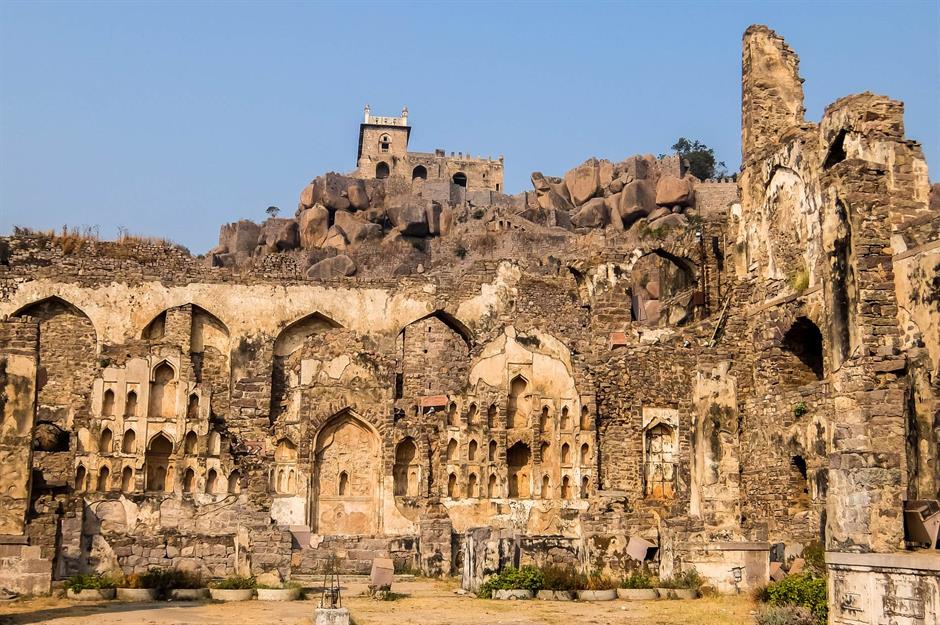 Denis Vostrikov/Shutterstock
Exquisite diamonds such as the Koh-i-Noor, now part of the British crown jewels, and the Hope diamond were mined in the area surrounding Golconda Fort. This impressive 16th-century fortress, west of Hyderabad in southern India, became rich as the heart of the diamond industry. 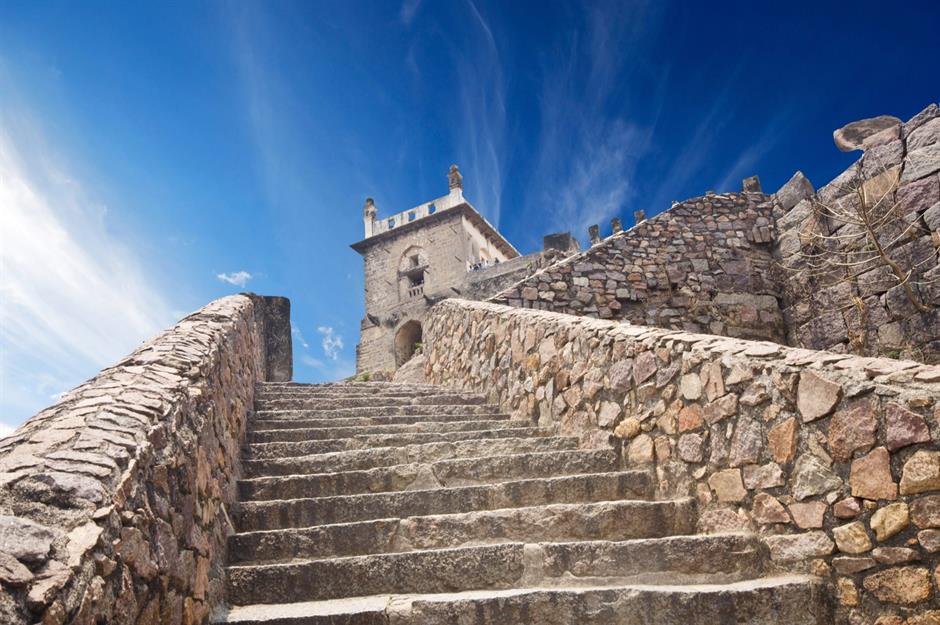 Waj/Shutterstock
The fortified citadel sits loftily on top of a 394-foot-high (120m) hill. When new, the architecture of Golconda was state of the art. For example, natural air conditioning allowed it to remain cool in summer. 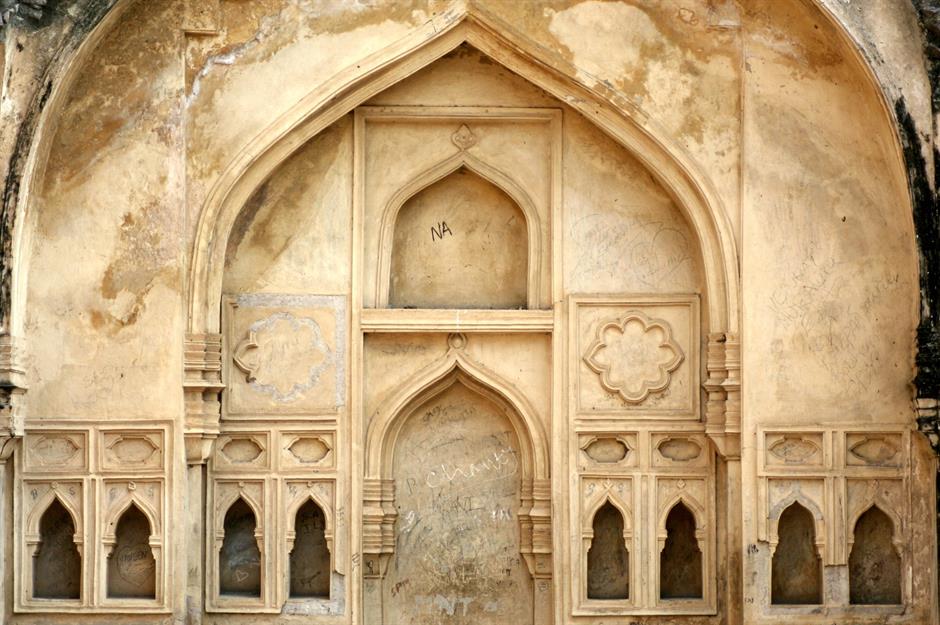 reddees/Shutterstock
The fort fell to the Mughal army in 1687 and the resulting devastation meant it was no longer repaired. The magnificent ruin is testament to the wealth of the diamond trade, the ingenuity of the architects and the might of the Indian empire. 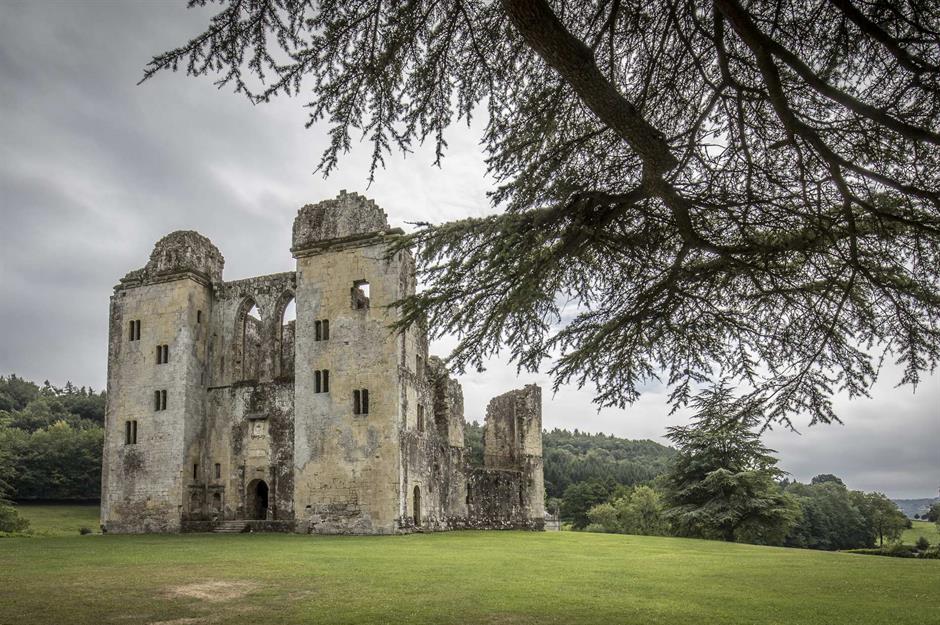 Steve McCarthy/Shutterstock
So deeply rooted is Old Wardour Castle in the English countryside that it seems to have always been in this crumbling state. But in the 14th century, here stood a magnificent French-style castle, built by John Lovell after marrying heiress Maud Holland. 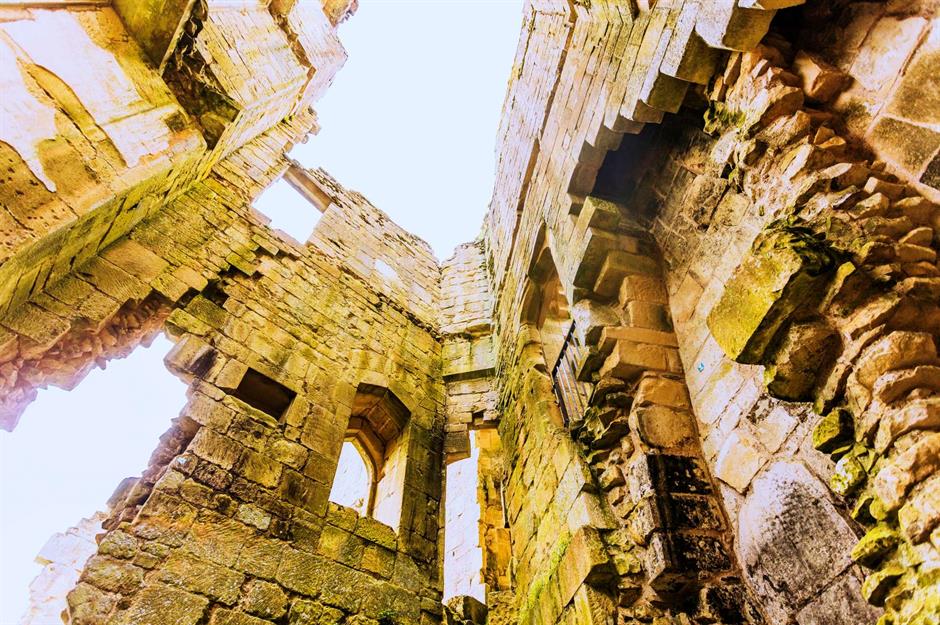 David Hughes/Shutterstock
Wardour passed back and forth between aristocrats and royalty until it was bought by the Arundell family in the 16th century. During the Civil War in 1643, the castle was besieged and eventually left to ruin. 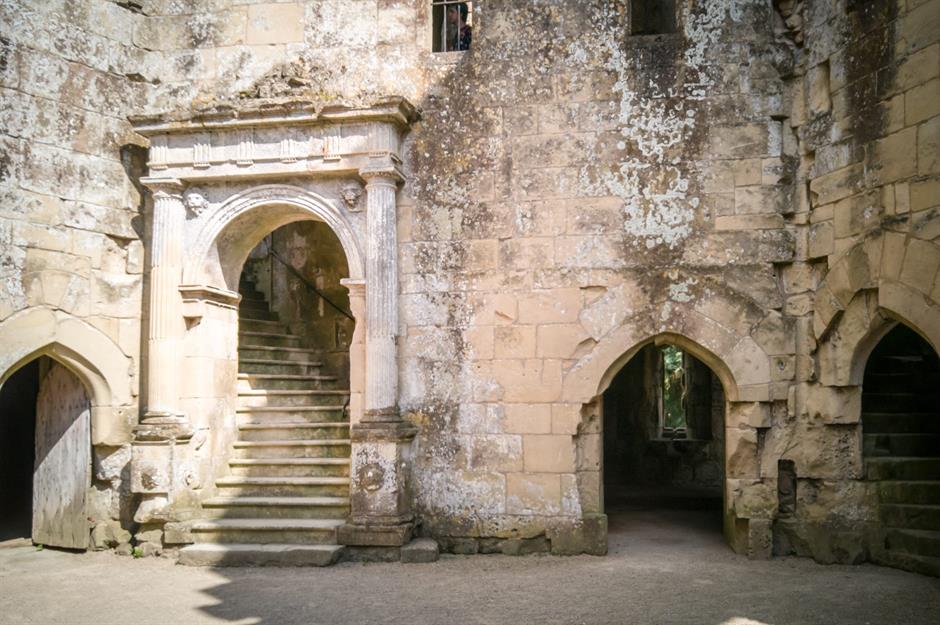 Joe Logan/Shutterstock
The Arundells never rebuilt Wardour and instead constructed a new house close by. The Old Wardour Castle later became an English Heritage property and it's now open to the public to explore. 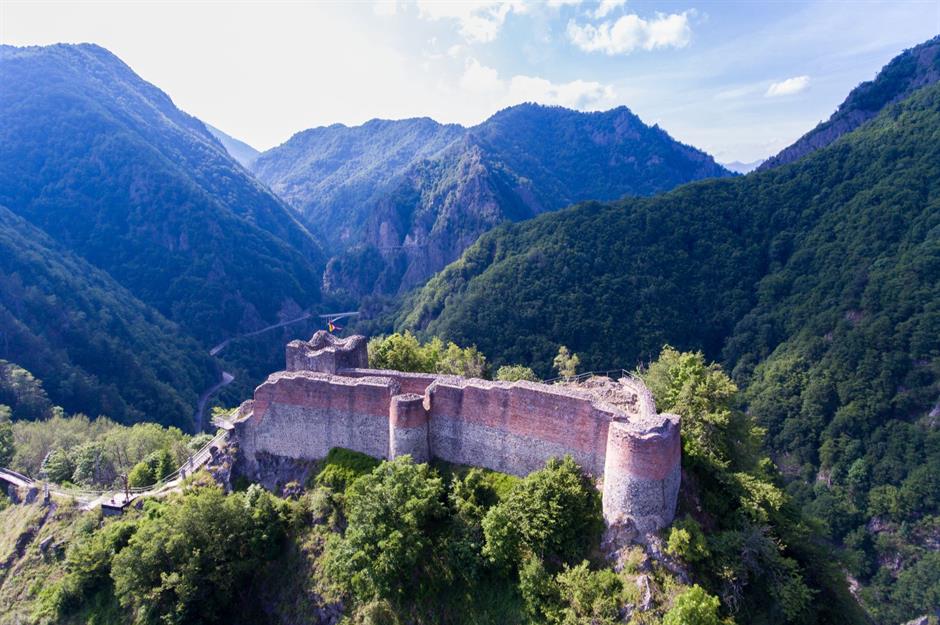 Colin Stan/Shutterstock
The only way to reach Poenari Castle in Wallachia, central Romania, is to climb nearly 1,500 arduous steps – but what a view when you get there. Originally built in the 13th century, it was the notorious Romanian king Vlad III Dracula, known as Vlad the Impaler, who realised the potential of the castle as a stronghold, with an altitude of more than 2,600 feet (800m). 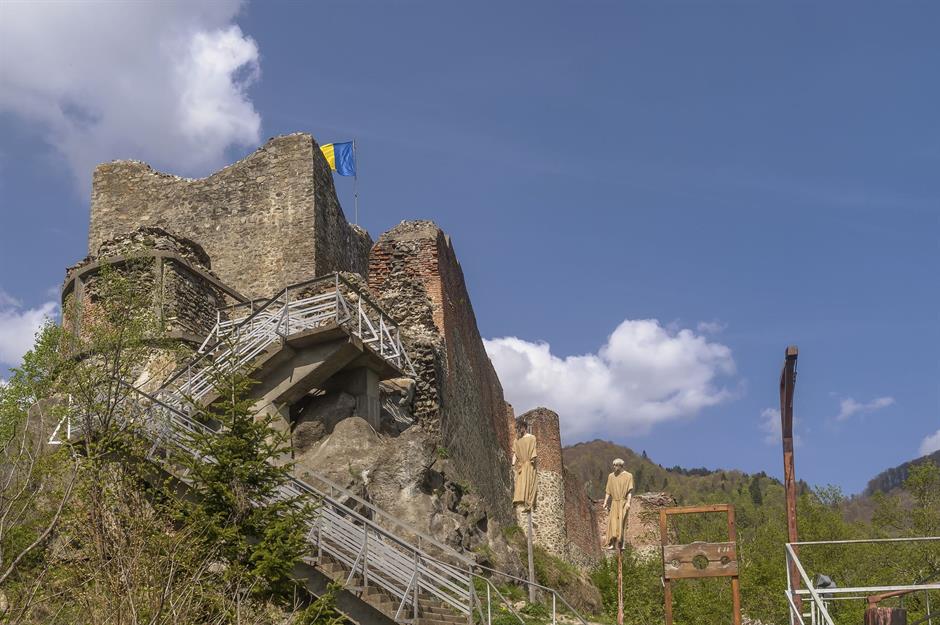 The castle fell into disrepair after Vlad’s death and was in ruins by the 17th century. A landslide in 1888 and an earthquake in 1913 caused further damage but repairs were made and today, tourists are welcome – although those steps keep away all but the most determined. 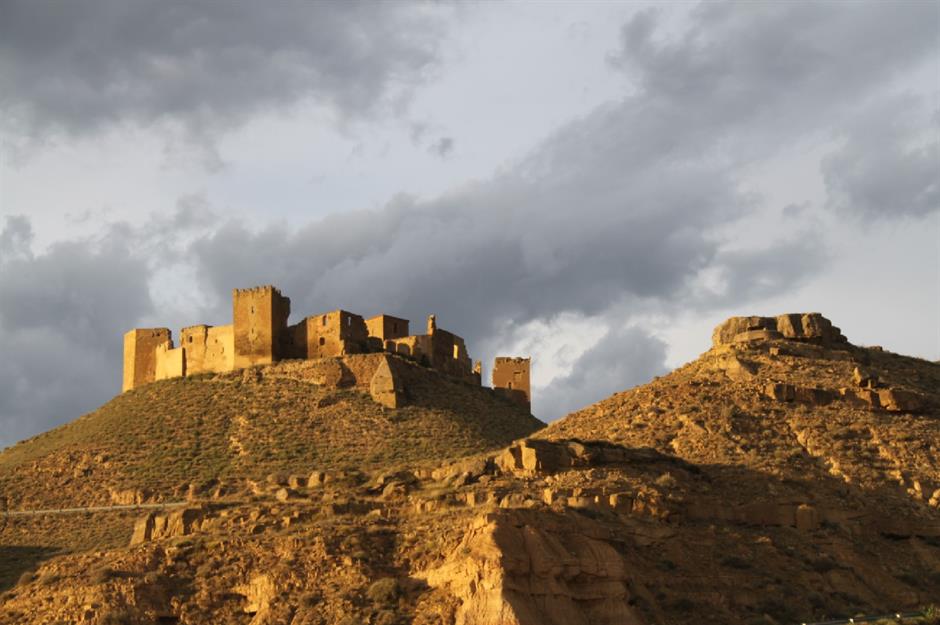 Setter 6/Wikimedia/CC-BY-SA-3.0es
This 11th-century castle is visible for miles on its high vantage point overlooking the plains of Huesca, in Aragon, northern Spain. It was originally built to help conquer the then-Muslim area of Huesca but later was given over to Augustine monks who used it for seven centuries. 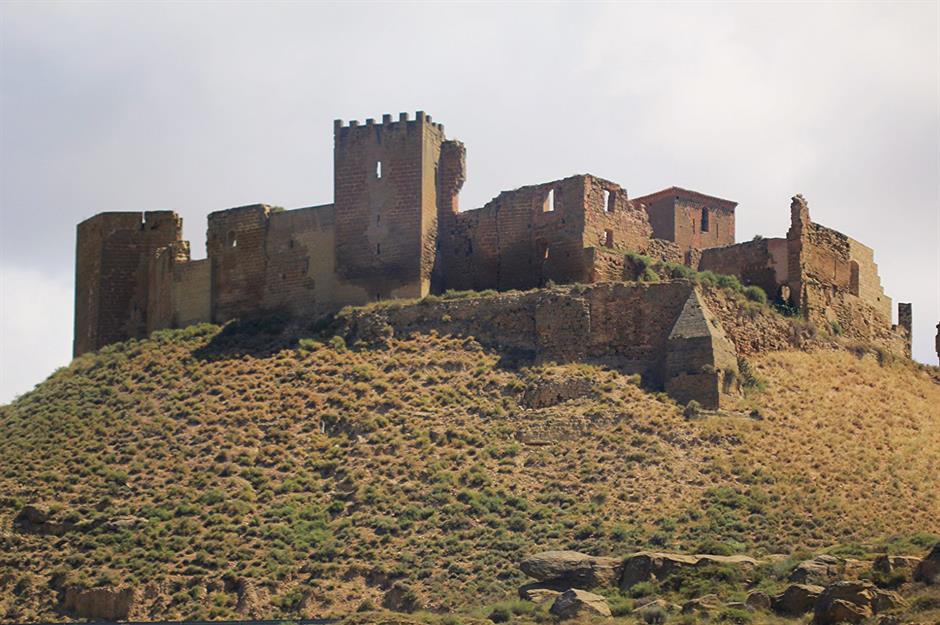 S Rae/Shutterstock
In the 19th century, the castle was used to store gunpowder and subsequently destroyed by an accidental explosion. It has laid in ruins ever since. With its crumbling walls and vacant chapel and bell tower, the castle casts a ghostly shadow over the whole region. 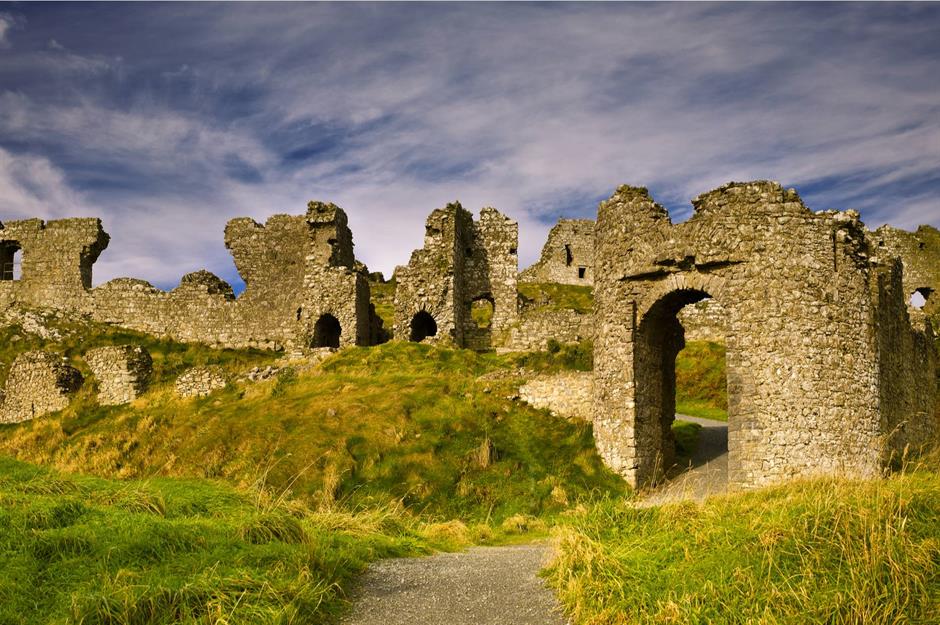 Gigashots/Shutterstock
Built high on a rocky outcrop west of Dublin, the ruins of Dunamase can be seen from miles around. The castle was built by the Normans in the 12th century and was an important stronghold. 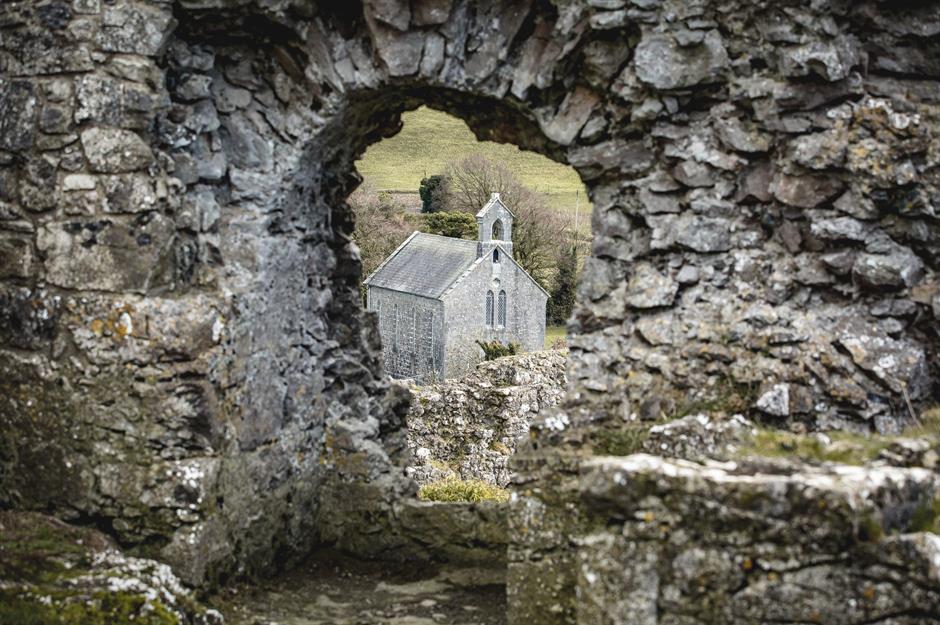 Mielag/Shutterstock
From 1325 to 1609, Dunamase belonged to the O’Moore family of Laois and later passed to the Earl of Thomond. But the castle's downfall came after an invasion by Cromwell in 1650 and it was never rebuilt. However, you can still get a feel of its former grandeur even today. 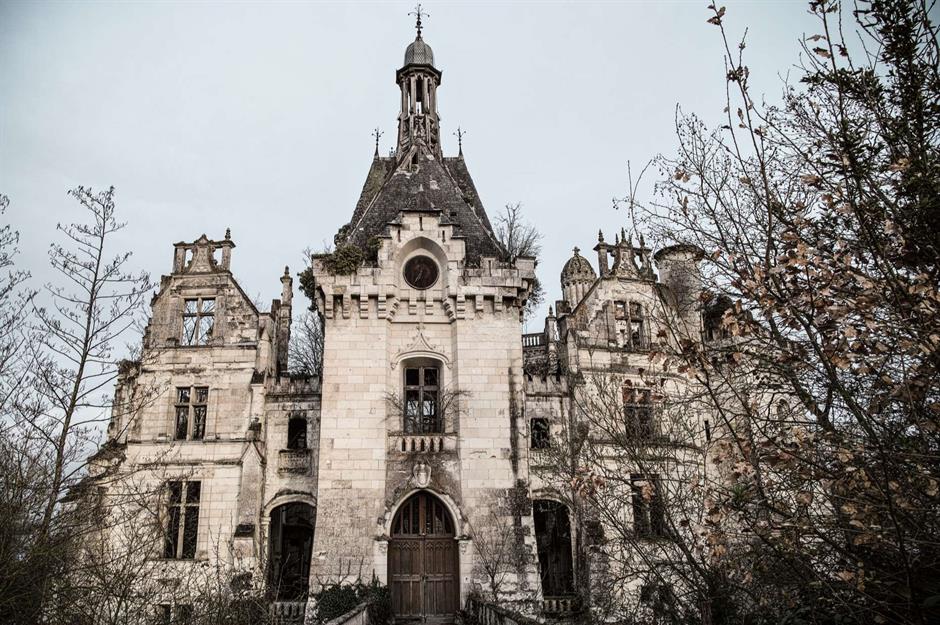 Oligo22/Shutterstock
Situated in the Les Trois-Moutiers region of western France, Château de la Mothe-Chandeniers dates from the 13th century. It was twice captured by the English in the Middle Ages and ransacked during the French revolution. By 1870, Edgard Lejeune began renovations but tragedy struck in 1932 when a fire destroyed the building including a library of rare books, tapestries, furniture and priceless paintings. 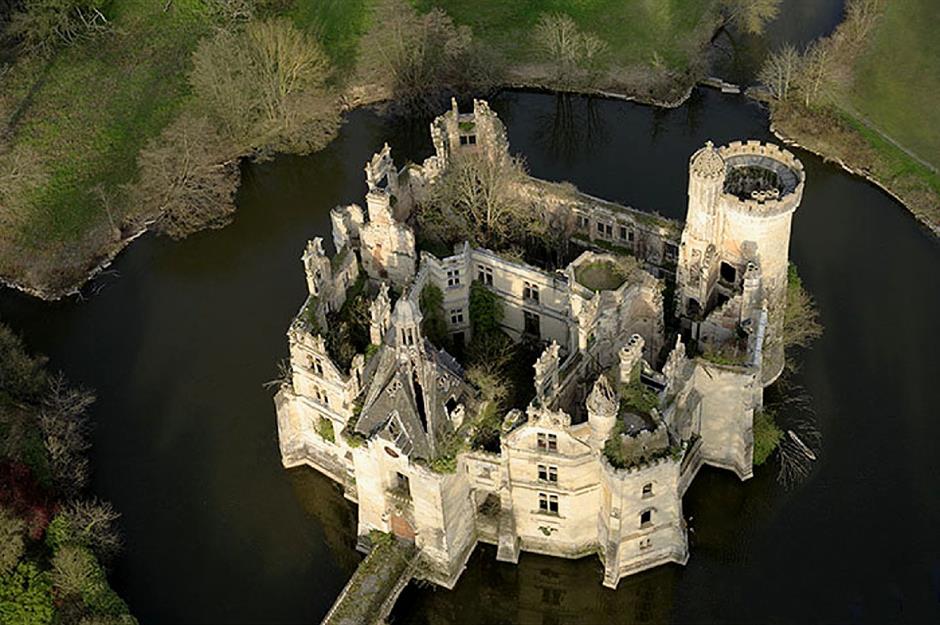 Pierre Maire/Wikimedia/CC-BY-2.5
However, there's a happy ending for this exquisite château. In 2017, it was saved from demolition by the generosity of strangers. More than 7,400 people donated to a crowdfunding campaign to rescue the beautiful structure. Maybe one day it will be restored to its former glory. 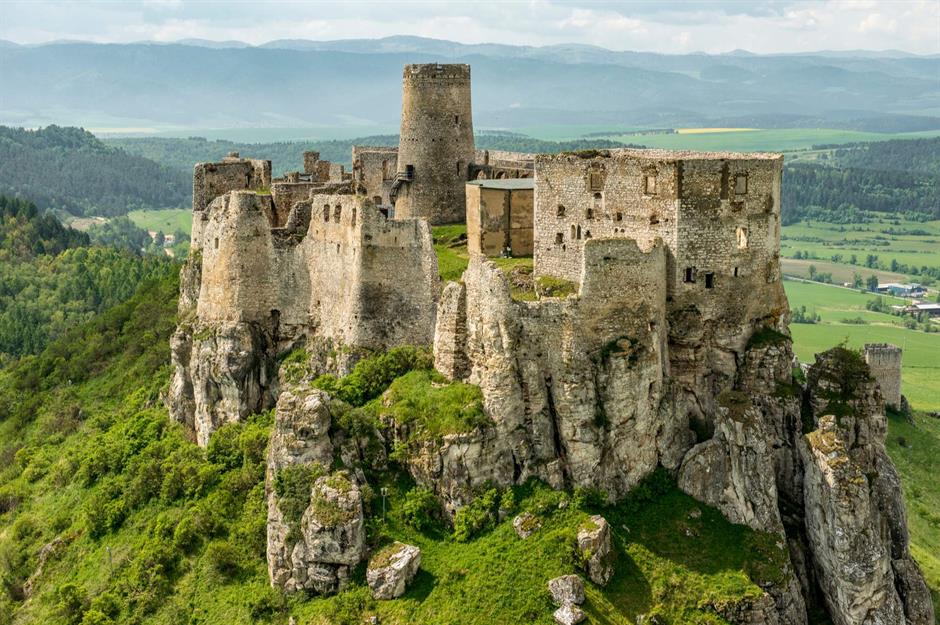 Tomas Hulik ARTpoint/Shutterstock
Spiš Castle in eastern Slovakia seems to rise from the rocks on which it sits. The castle dates from the 12th century when the area was part of the Old Hungarian feudal state. But in 1780, it was destroyed by fire and fell into ruin. 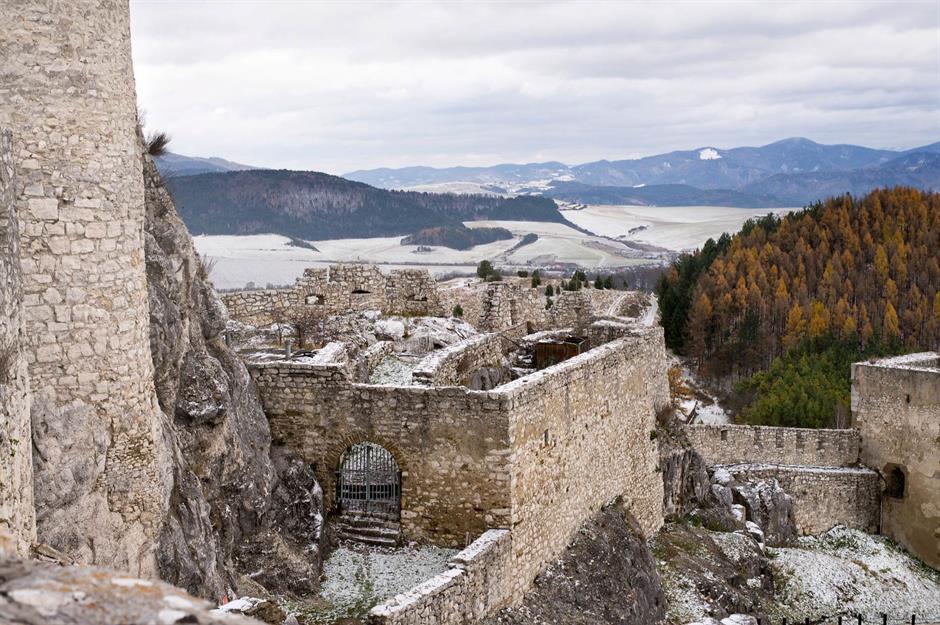 Vladiczech/Shutterstock
Covering more than four hectares, Spiš is one of Central Europe's largest castles. After the Second World War, it became the property of the Slovak state and restoration began in the 1970s. In 1993 it was put on the UNESCO World Heritage list and today remains a top tourist attraction. 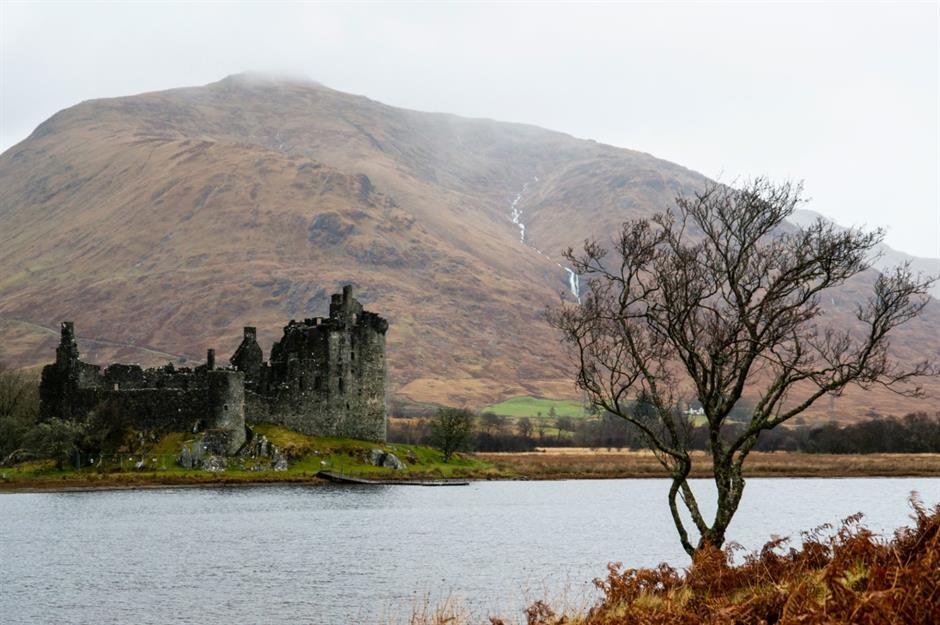 Historic Environment Scotland
Back in the 13th century, Kilchurn Castle was a hub of energy. It was built in the mid-1400s by the Campbells of Glenorchy, a family who dominated the central Highlands. Originally it was constructed on an island not much bigger than the castle itself and was accessed by a causeway. During the Jacobite uprising of the late 1600s, the castle was converted into a garrison stronghold and at one time could hold 200 troops. 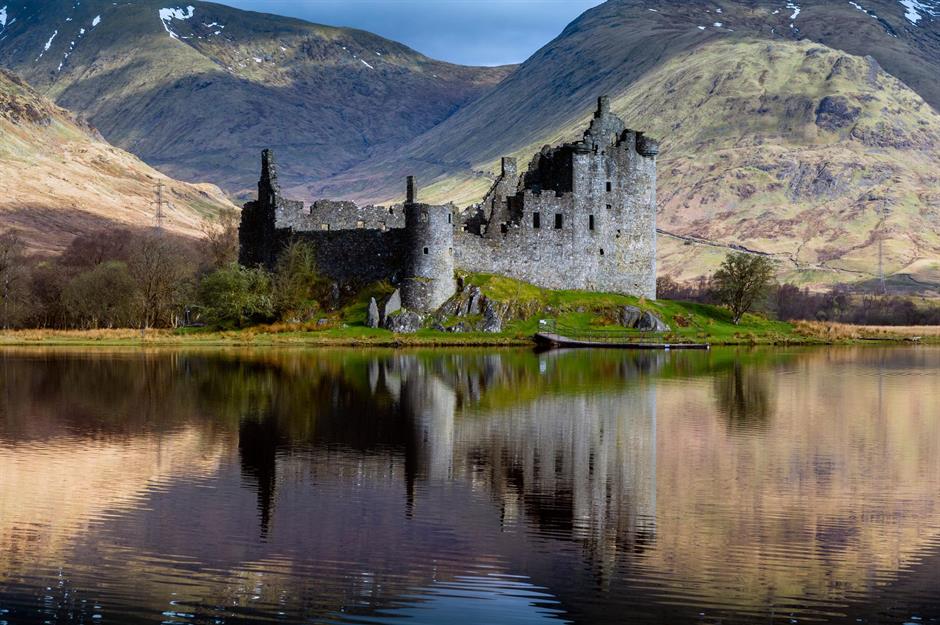 Around 1760, a violent storm raged and lightning struck the castle, irrevocably damaging the building. It was abandoned and left to rot and ruin. 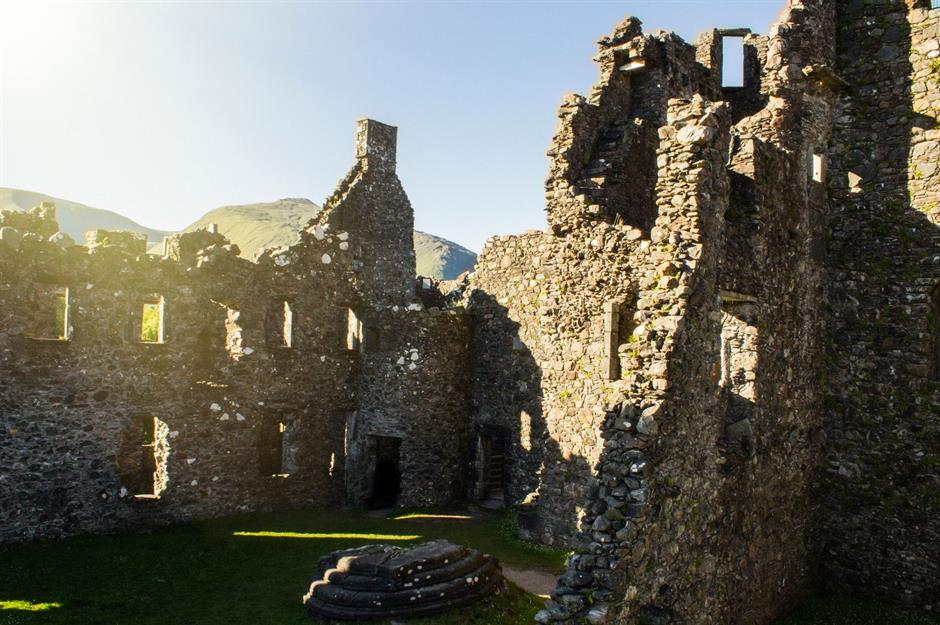 After Kilchurn became derelict, it proved a popular stop on the tourist trail. Eventually, the structure was handed to Historic Environment Scotland and is preserved as a romantic relic on the Scottish landscape.