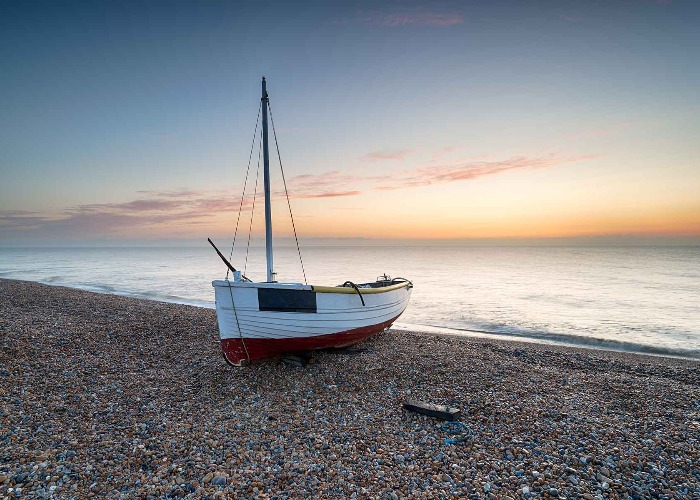 The Kent coast, with its pretty beaches, coastal walks and creative seaside resorts, is always popular with British holiday-makers. If you want to escape the crowds, here are the best places to visit.

If the mile-long queue of traffic into Whitstable and the heaving main sands of Margate are giving you second thoughts about visiting Kent's beautiful coast, rest assured that there are still plenty of quiet corners, whatever the season. From sand or shingle beaches, to wetlands and Roman forts, these are the crowd-free places on the Kent coast.

1. For a beautiful beach: Botany Bay

This gorgeous secluded sandy beach with dramatic chalk stacks is a photographer’s dream. Botany Bay is a Blue Flag beach, so the water quality is guaranteed, and there are plenty of nooks and crannies to be explored, not to mention rock pools when the tide is out. 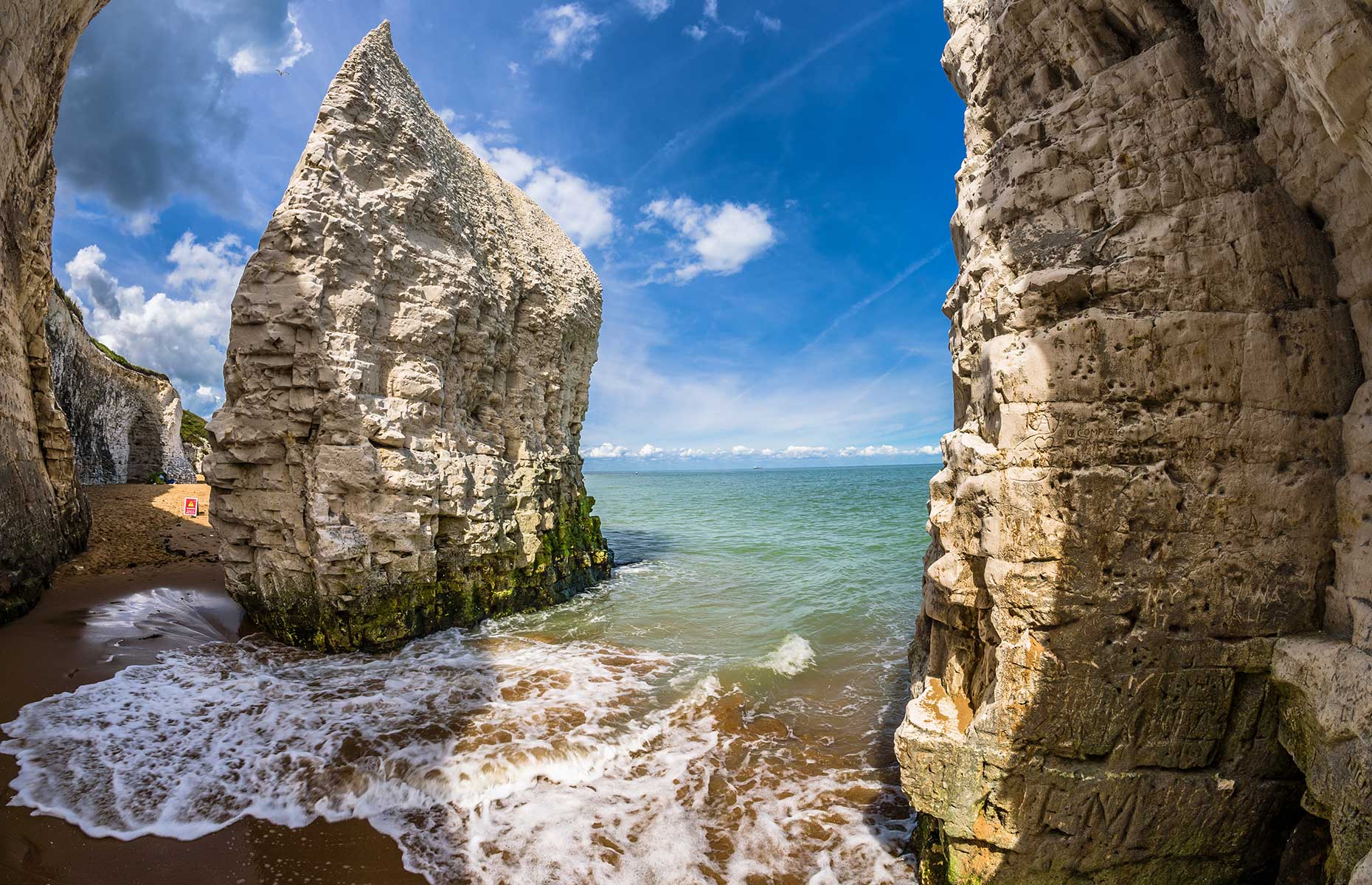 The poster child of the local tourist board, it’s surprisingly overlooked out of season, possibly because of the lack of public transport and limited facilities. But the tide goes a long way out, which means plenty of sandy bay available. It's possible to cycle here from Margate or Broadstairs train stations (or even walk, at a push), and either of those towns has all coolest places to eat and drink.

READ MORE: Our full guide to the Garden of England

In the early 19th century, George IV decreed Ramsgate a Royal Harbour – and today it’s the only one in Britain. Information panels on the quayside will give you the lowdown on the town’s seafaring history, including the countless wrecks offshore on the Goodwin Sands and the town’s vital role in the Dunkirk evacuations. See too, the memorabilia in Little Ships Restaurant and Cafe, a wonderful harbourside spot with outside tables and seafood on the menu. 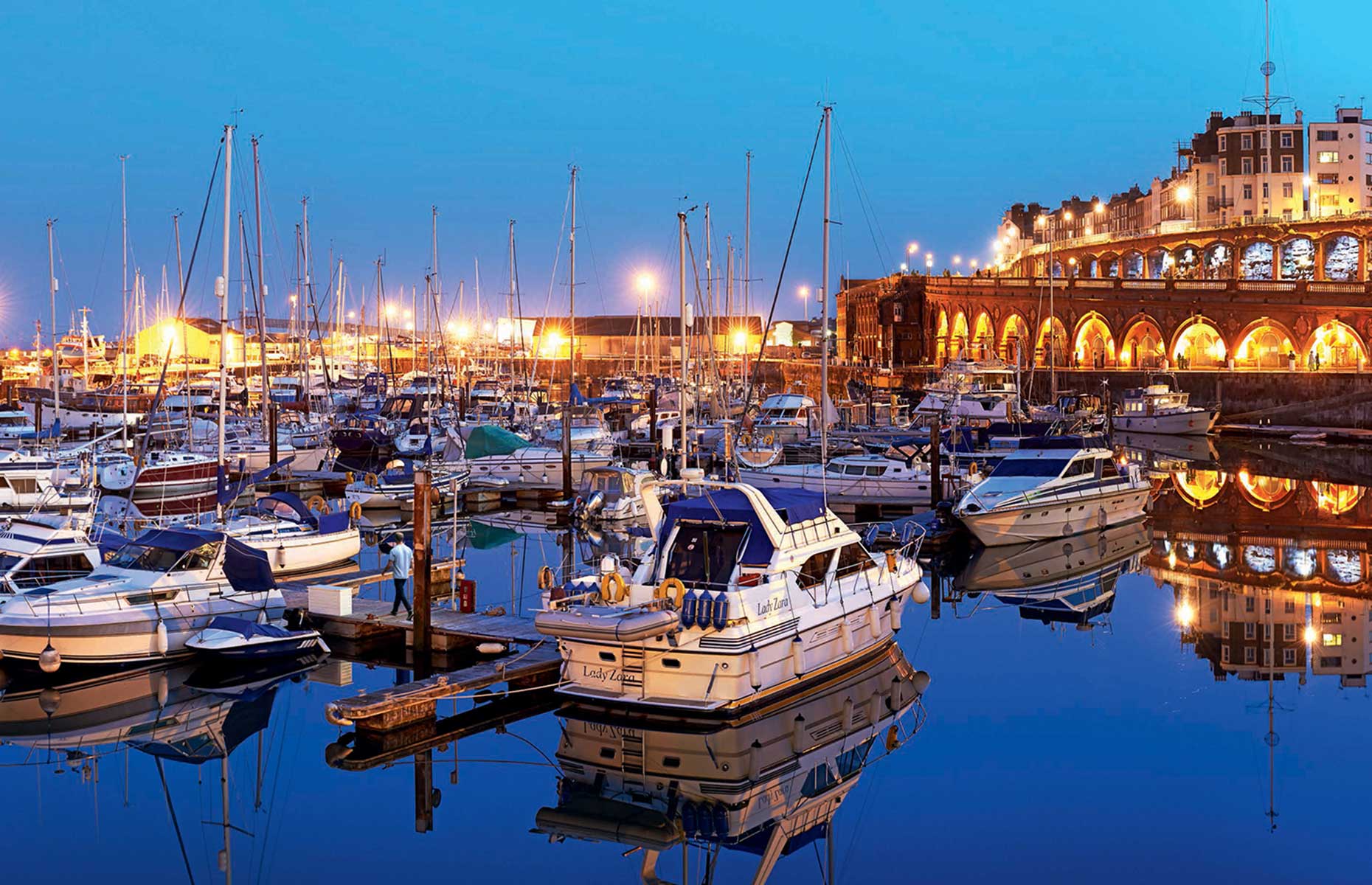 You can stroll around the pretty marina to see the last sea-going steam tug in UK waters, the 320-ton Cervia, and the diminutive Sailor’s Church, which was built in the mid-19th century for fisherman and their apprentices who were known as “smack boys” (look out for the lettering on the building next door to the church). There's still a traditional chandlery under the arches of the harbour, a few doors down.

3. For wetlands and marshes: Isle of Sheppey 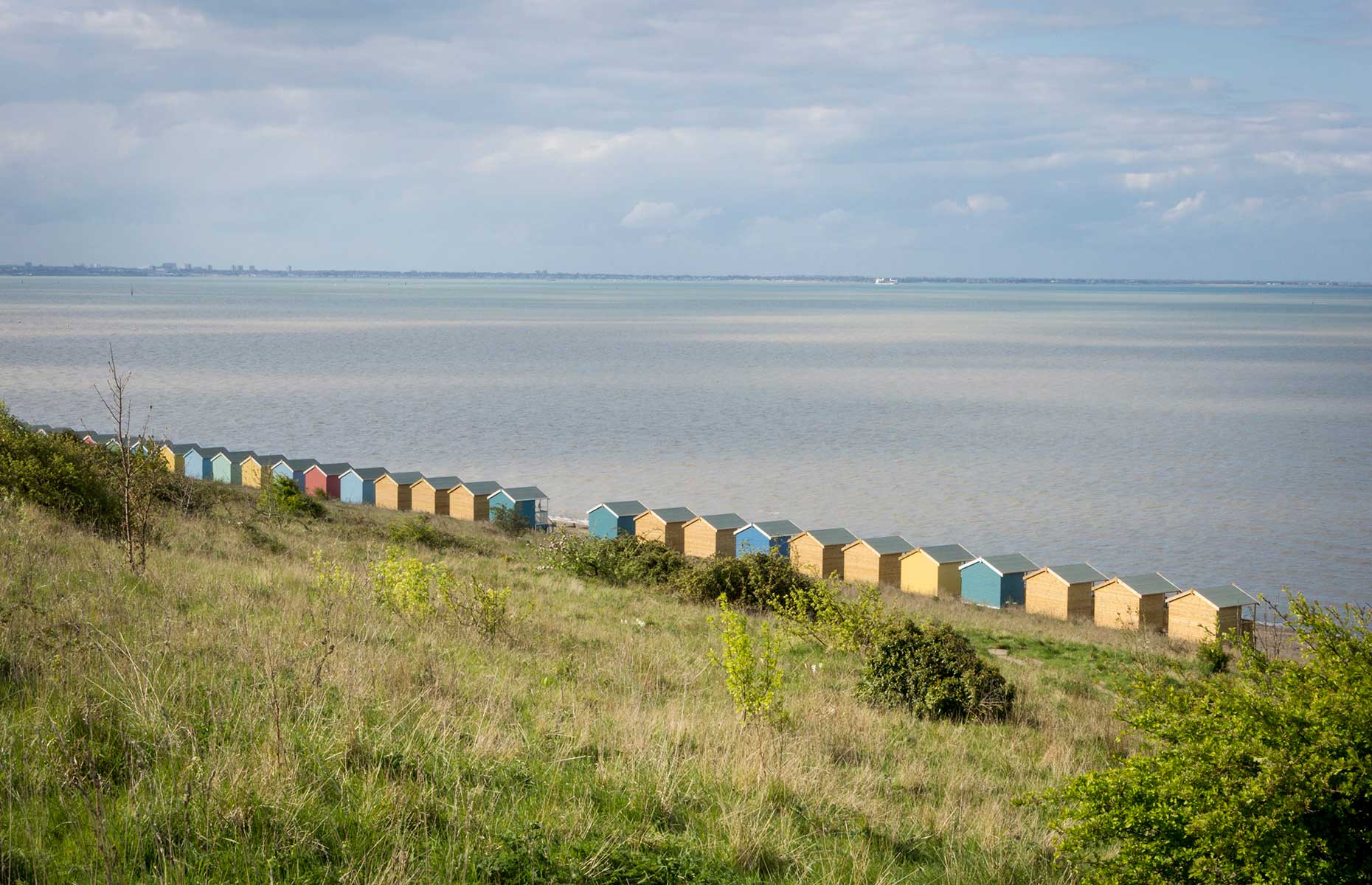 The 36-square-mile (93sqkm) island was once the “isles” of Sheppey, but today Harty and Elmley isles to the south have all but merged with the main island. Separated only by narrow channels and marshlands, these wetlands are teeming with birdlife and make Sheppey's most appealing places to explore.

You could also visit the remote early Norman Church of St Thomas the Apostle and eat or stay at the charming Ferry House Inn.

A couple of miles west of Whitstable you’ll find the same big sky and shingle beach etched with timber groynes, but none of the crowds. This lonely and atmospheric spot at the mouth of the River Swale was mentioned in the Domesday Book of 1086 as belonging to the “kitchen of the archbishop [of Canterbury]” and is today famous for oysters (muddy offshore oyster beds are revealed when the tide is out) and Michelin-starred The Sportsman (make a reservation in advance).

Few seaside walks can beat the hour-long stroll east from Seasalter, along Whitstable’s rugged beach with its weathered upturned fishing boats, to quiet Tankerton, and the lovely JoJo’s restaurant, which is hoping to reopen in August. 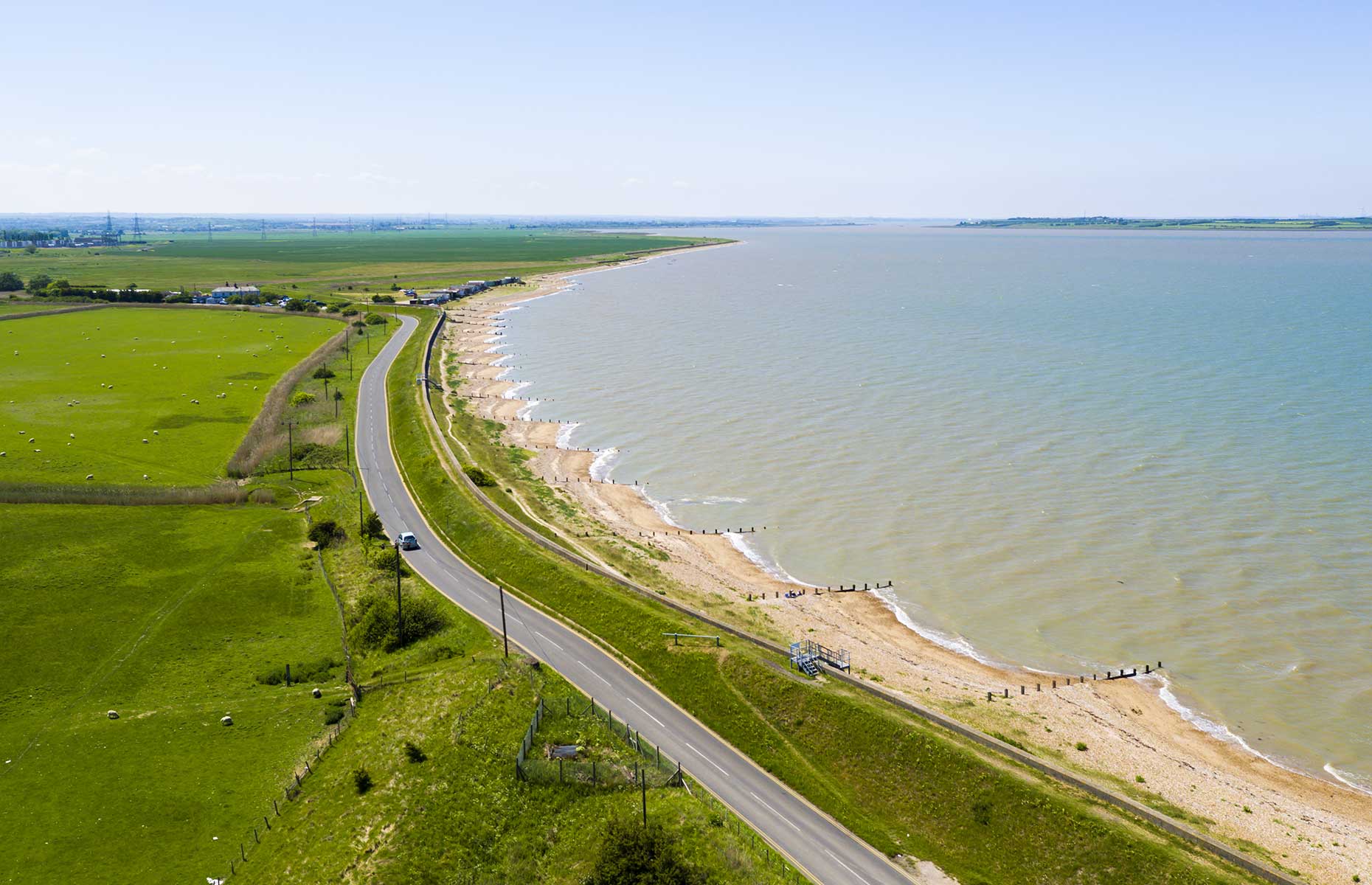 For a small site, Reculver Towers and Roman Fort makes a big impression as a looming landmark on the north Kent coastline. Human settlement here dates to prehistoric times, but it was the Romans who built a fort here in the early third century. Much of this history has been washed away by dramatic coastal erosion, and the twin towers you can see are the remains of a remodelled Anglo-Saxon church.

Reculver is on two long-distance walking or cycling routes, the Viking Coastal Trail and theSaxon Shore Way. There’s a pub – and car park – close to the fort, but even better are the delis and cafés in the seaside resort of Herne Bay four miles (6.2km) west, or the Minnis Bay Bar and Brasserie on the seafront three miles east. 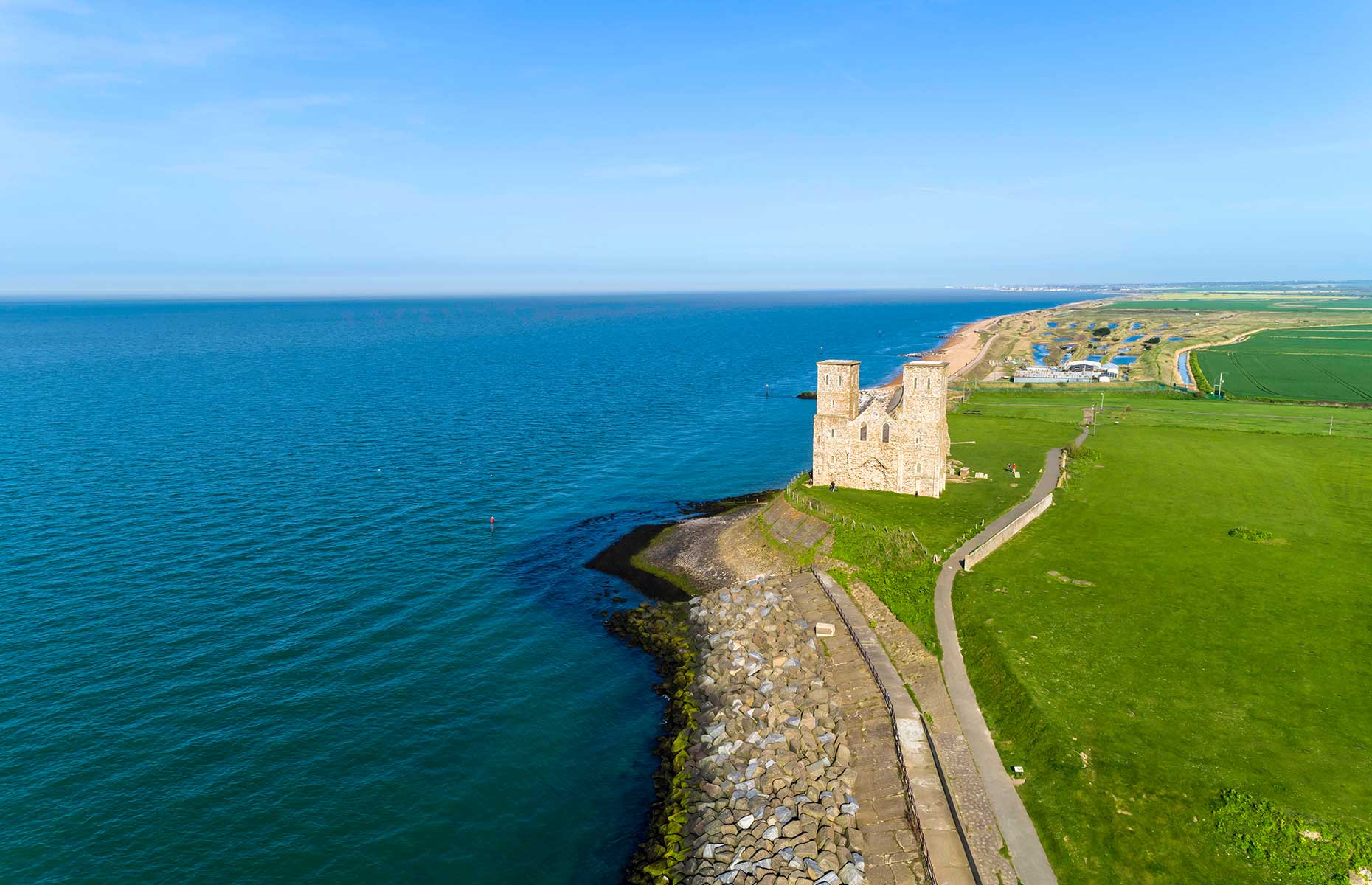 Yes, it has a creative quarter but Folkestone has managed to keep hold of its old sea dog character. The arts have helped coax this vibrant, busy seaside town back to life and on a stroll of its narrow cobbled lanes you'll spot studios, galleries and bookshop-cafés like Steep Street. 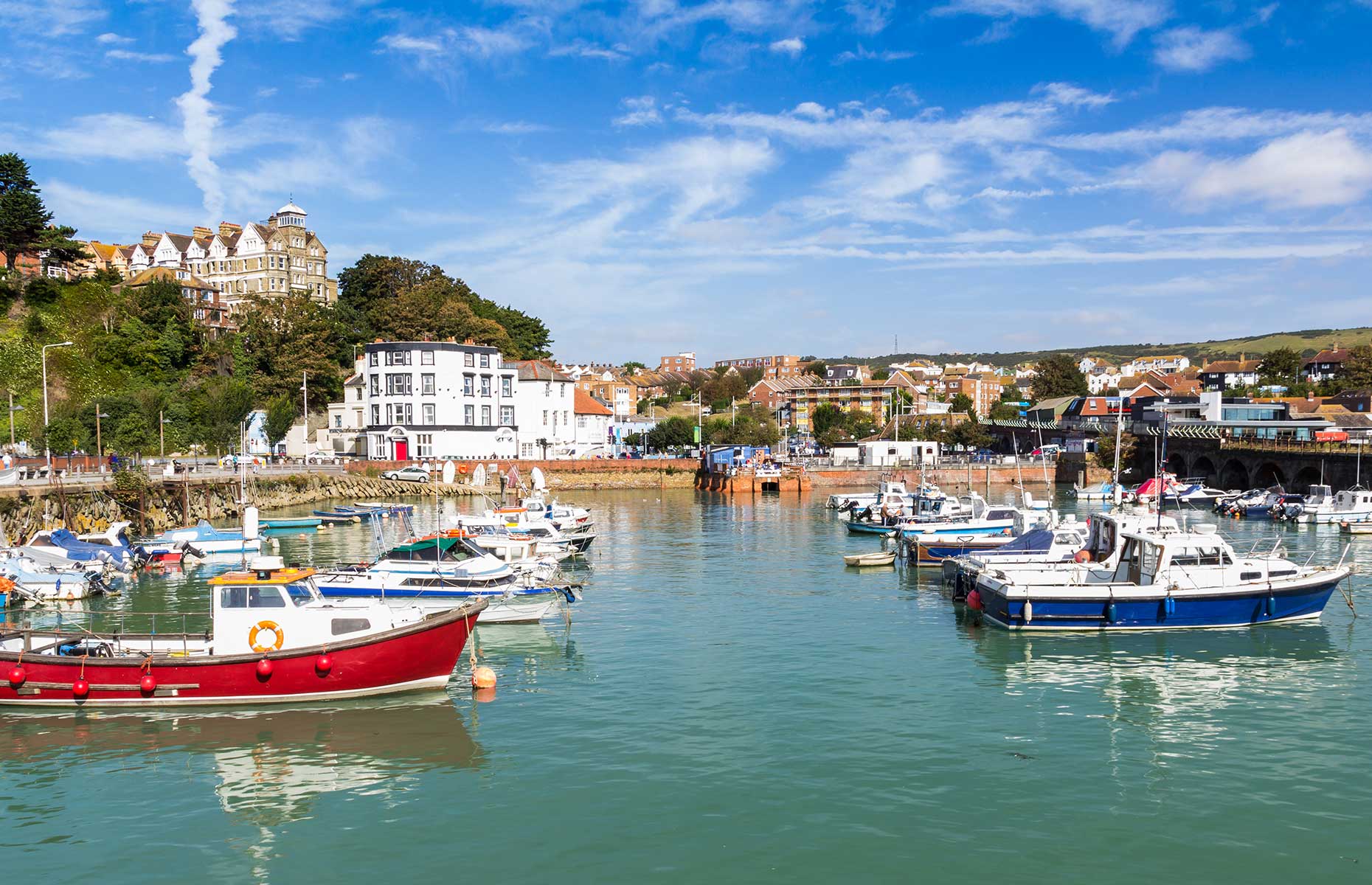 The restored Harbour Arm might be a little quieter this year, but they are looking forward to 2021 when it will once again be the hub for live music and events. For now, the independent food and drink vendors are open for business and the Harbour Screen has morphed into a Drive-in cinema (the Vintage Sunday Market pops up here now, too). Finally, don't miss the one remaining Anthony Gormley statue beneath the harbour arm.

And once you've had your culture fix? Take a walk along the East Cliff and Warren Country Park.

Henry VIII built a chain of coastal defences along the Kent Coast, and the charming seaside town of Deal is bookended by two of his artillery fortresses: Deal Castle and Walmer Castle (book tickets for each in advance). Between these two landmark buildings is a long, peaceful pebble beach fronted by handsome Georgian townhouses. 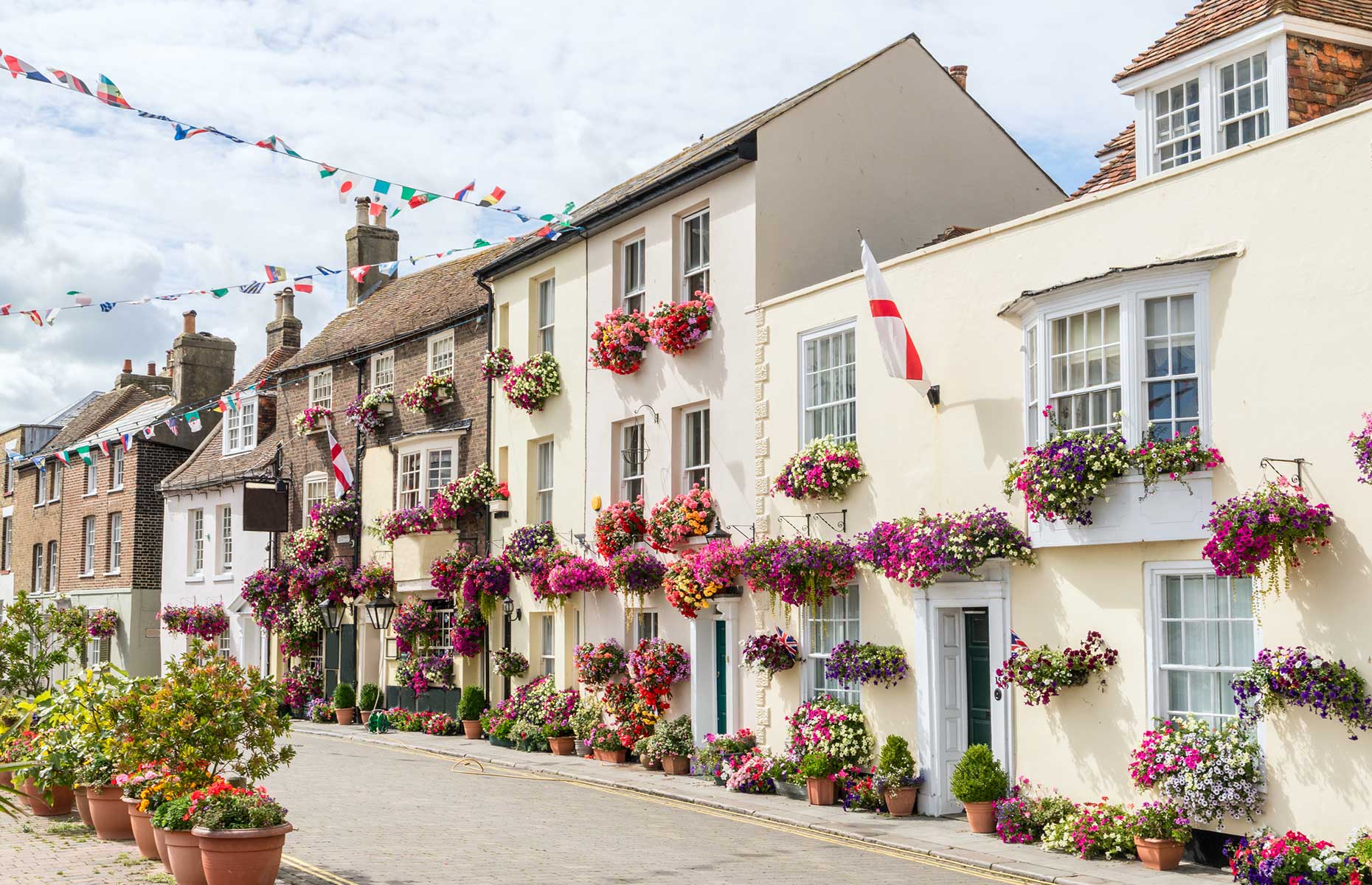 The restored pier is the best place to start any visit, and from here you can explore the grand seafront along Beach Street and the warren of lanes between here and the atmospheric old High Street. The best pick for a pub lunch and a Kentish ale is The Rose.

READ MORE: Amazing places you won't believe are in the UK

8. For views of the French coast: St Margaret’s at Cliffe

St Margaret’s Bay is the departure point for attempts to swim to France, which on sunny days looks tantalisingly close. Francophiles wanting a more relaxing pursuit should have a drink in the nearest pub to France, The Coastguard, which has ridiculously beautiful sea views and outdoor tables for walk-ins. 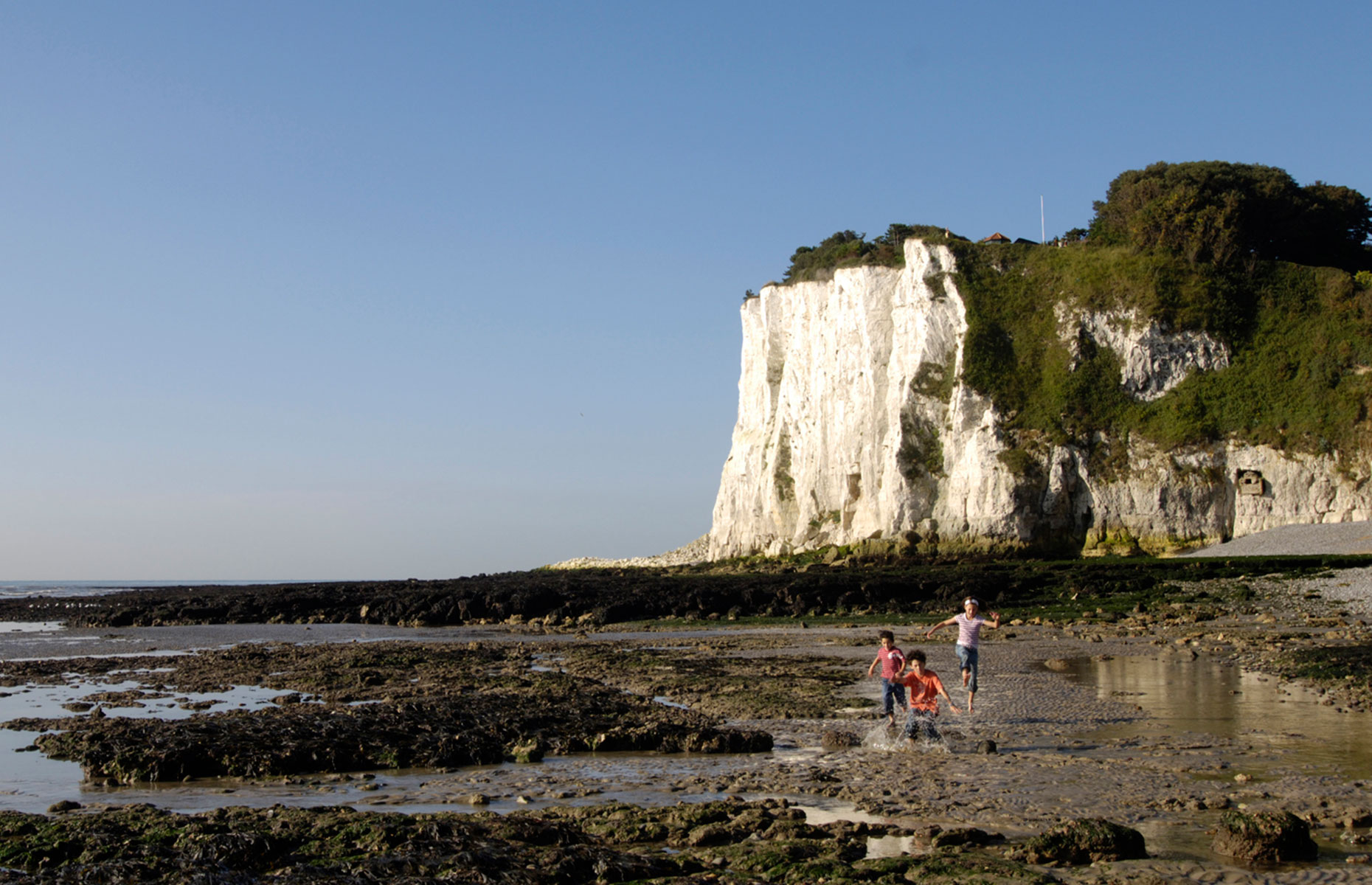 9. For nature and tranquillity: Samphire Hoe

At the foot of the iconic Shakespeare Cliff a few miles west of Dover, Samphire Hoe is an entirely man-made nature reserve, created from the chalk marl that was excavated for the Channel Tunnel.

Two decades have passed since this new part of England was forged and the blustery site has become a haven for wildlife, attracting a wide range of species including a rare early spider orchid, birds, butterflies, moths, dragonflies and 200 types of plant.

The dramatic white cliffs setting and gorgeous sea views make it a great place for a stroll and a picnic. 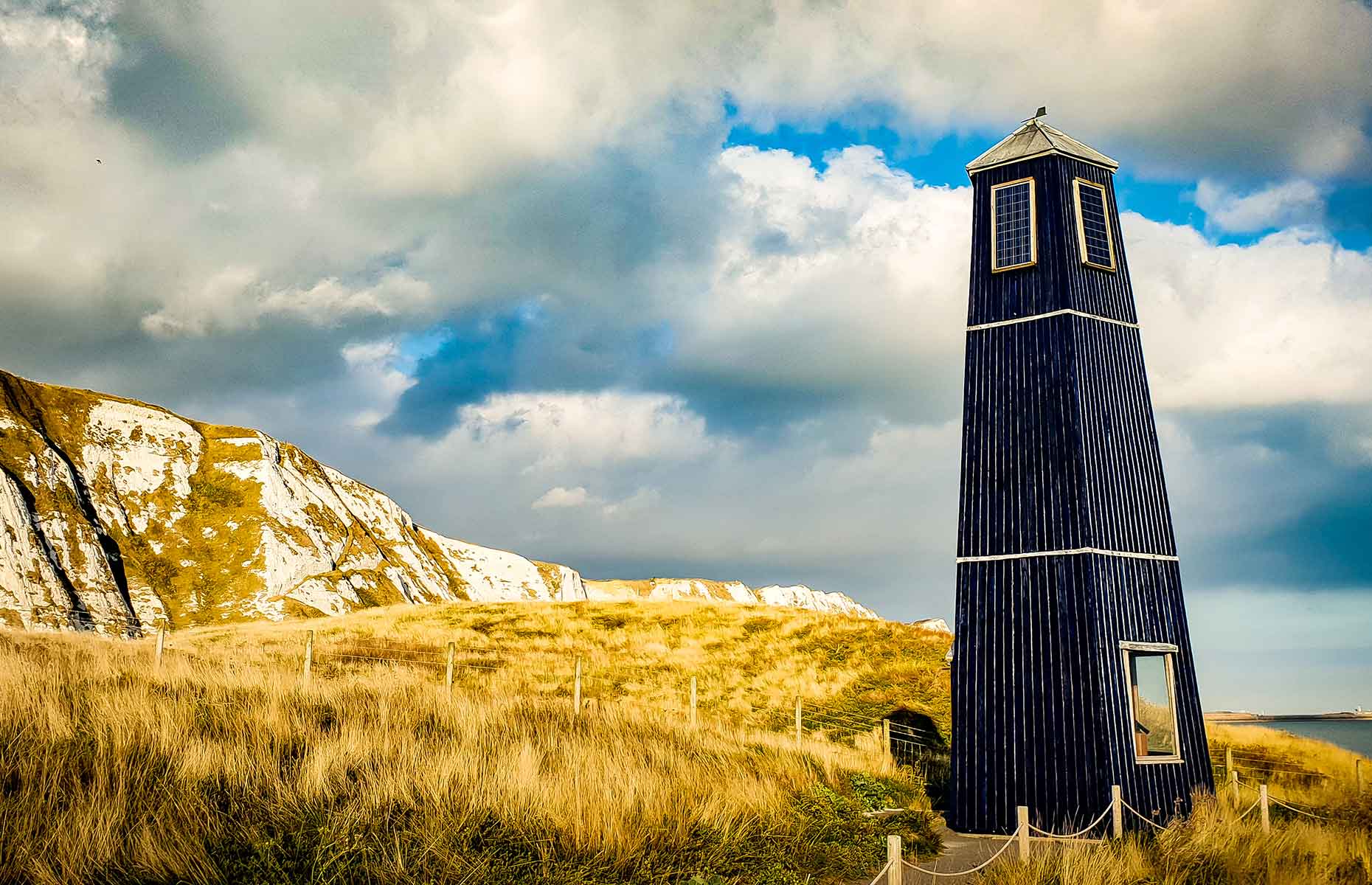 10. For a post-apocalyptic feel: Dungeness

The vast shingle beach at Dungeness and its looming nuclear power station really does feel like the end-of-the-world, rather than the end-of-the-line for the small steam and diesel locomotives that chug here on the Romney, Hythe & Dymchurch railway from Hythe (for now, they are running Tuesday and Wednesday, and pre-booking is essential). 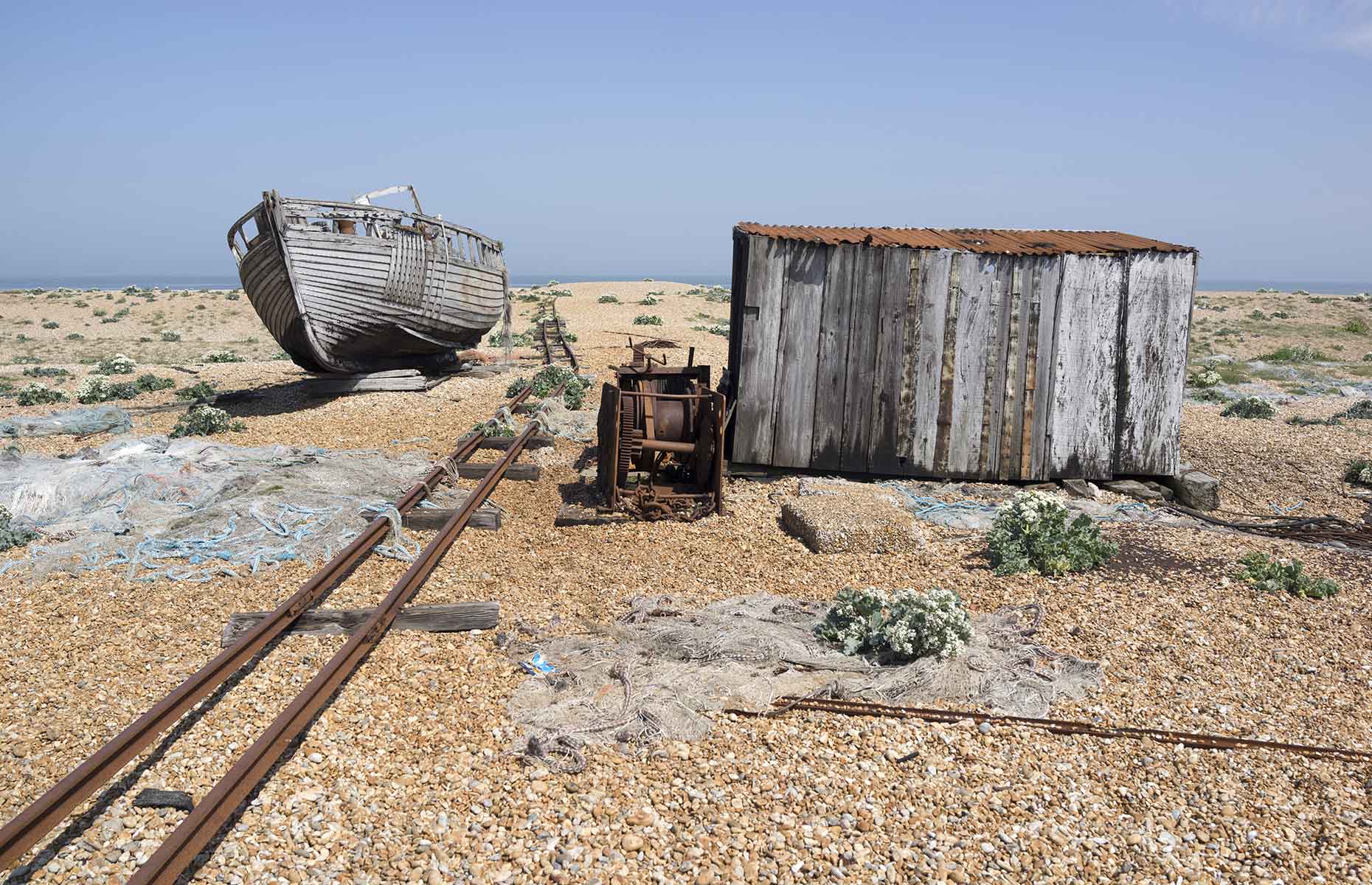 Railway enthusiasts shouldn’t miss the Model Railway exhibition at New Romney, while fans of The Railway Children should beeline for author Edith Nesbitt’s grave, marked with a simple wooden cross at a church in St Mary in the Marsh.

Though it’s the bleak landscape of Dungeness that’s the star attraction. Derek Jarman trail-blazed the arts scene here by planting his famous garden at Prospect Cottage (which is private but can be viewed from the road) and today eclectic art galleries are dotted about in various clapboard dwellings. The headland is a national nature reserve and you’ll see lots of weird and wonderful flora and fauna.