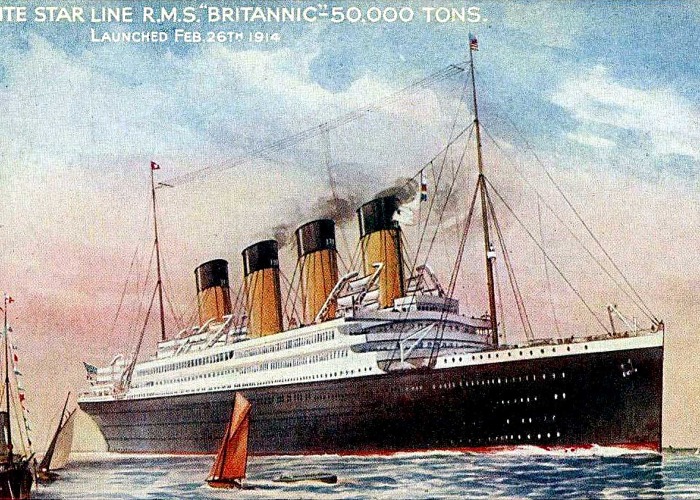 In 1916, four years after the sinking of the Titanic, her near-identical sister ship also met a watery grave in mysterious circumstances. Here, writer Laura Jackson discovers what really happened to the Britannic, the Titanic’s lost twin.

With her four funnels, slick of red paint along the hull and sharply pointed bow, it would be easy to mistake the ship in the postcard above for the famously ill-fated RMS Titanic.

Except this is the Britannic – one of the Titanic’s two sister ships.

The similarities between these seafaring siblings didn’t end with the silhouette of their iron hulls either. Both ships were sunk in the most tragic circumstances.

The White Star Line, the Titanic's owners, had always intended her to be one of three ships, with plans laid down for a trio of new liners back in 1907.

The three ships were intended to capitalise on the growing numbers of transatlantic journeys, taking people from Europe to a new life in Canada and the USA.

READ MORE: These stunning images reveal the secrets of the Titanic

Other shipping lines had rival liners including Cunard’s RMS Lusitania and the RMS Mauretania.

White Star Line wanted to be bigger, faster and safer and came up with a plan for a series of huge, super-speedy and unsinkable ships.

The Olympic was to be first, launched in 1911; Titanic second in 1912; with the final ship to be added later. 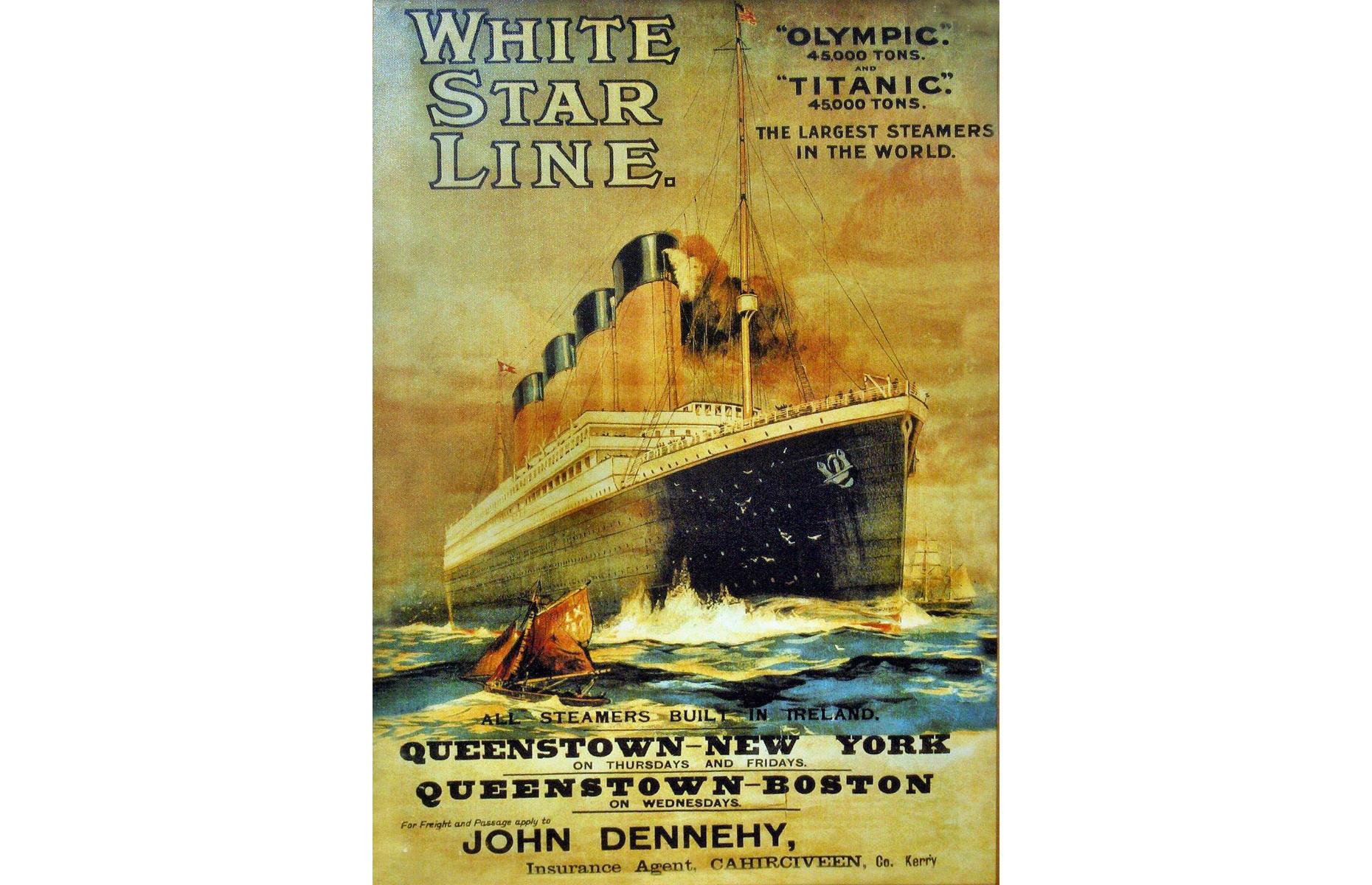 Building work had only just started on the Britannic at Harland & Wolff's shipyard in Belfast, Northern Ireland when the Titanic sank on the night of the 14 April 1912.

Britannic's construction was halted while the inquest into the Titanic tragedy was held. 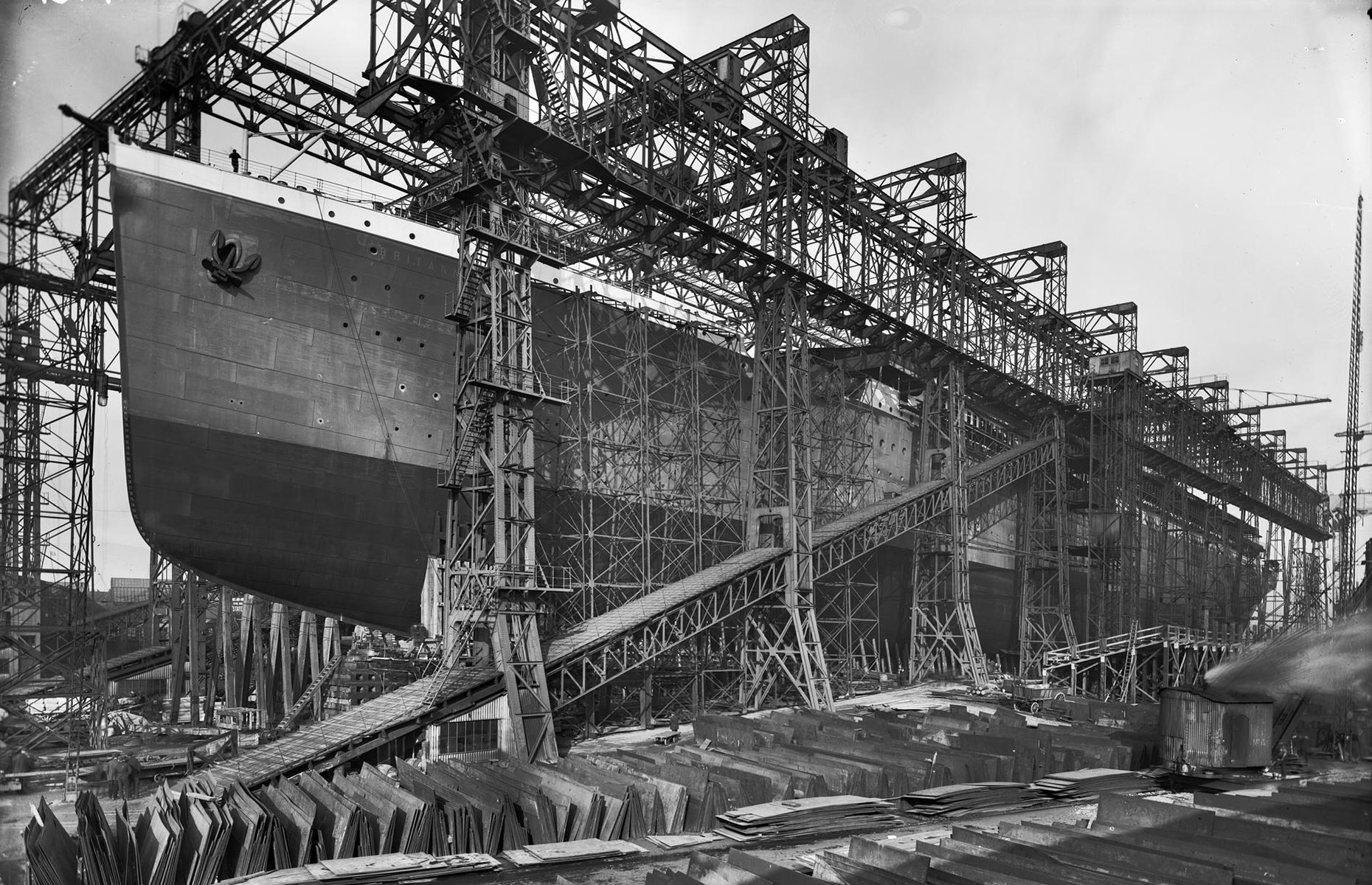 When work resumed there were a number of modifications to Britannic's original design.

Firstly, the name was changed. Early advertising posters of the Britannic show that originally she was to be called “Gigantic”. After the loss of 1,500 people on the Titanic it's a name that was justifiably reworked.

Several features were upgraded to strengthen Britannic's hull too.

The closable, watertight compartments were extended higher up the ship to reach B deck. This was the feature that had spectacularly failed to protect the Titanic, with the compartments overflowing from one to the next after she struck an iceberg.

A "double skin" was added to the hull, so if the first was punctured she wouldn't be exposed to the seas.

And, of course, there were additional lifeboats fitted – Britannic carried 48 compared to the Titanic’s 20.

White Star Line anticipated her running a Southampton to New York service from the spring of 1915, after being fitted out with similar furnishings to her earlier-launched sisters.

This image below is a sketch of the first-class staircase on Britannic.

However, the outbreak of the First World War in July 1914 meant that Britannic never saw commercial service.

She was renamed again, this time to HMHS Britannic (His Majesty's Hospital Ship) and her luxurious interiors were transformed into dormitories.

Britannic's exterior was painted white, with a green stripe and red crosses. She served as a hospital ship from 12 December 1915, returning wounded soldiers to the UK from the front line.

HMHS Britannic remained in service until a fateful trip through the Kea Channel in the Aegean Sea. On the morning of 21 November 1916, the Britannic was rocked by an explosion.

Captain Charles Bartlett tried to steer the ship towards the island of Kea in order to beach her, but it took just under an hour for her to sink.

Of the 1,100 people onboard just 30 lives were lost, largely thanks to the quick thinking captain and the greater number of lifeboats.

Nobody knows exactly what caused the explosion. Some believe it was a torpedo, others think it more likely she hit a mine.

An article in the British newspaper The Observer on 26 November 1916 published an admission from German forces, via the news agency Reuters, that they torpedoed the ship in the belief she was transferring "fresh troops for our enemies" rather than acting as a hospital ship.

Either way, at 2,000-tonnes heavier than the Titanic, the HMHS Britannic remains the largest ship on the ocean floor today.

One of the lucky ones?

Yet, the most extraordinary seafaring story of all isn’t of the ship itself, but that of Violet Jessop. A nurse on the HMHS Britannic, she survived accidents on all three of the White Star Line’s Olympic-class ships. 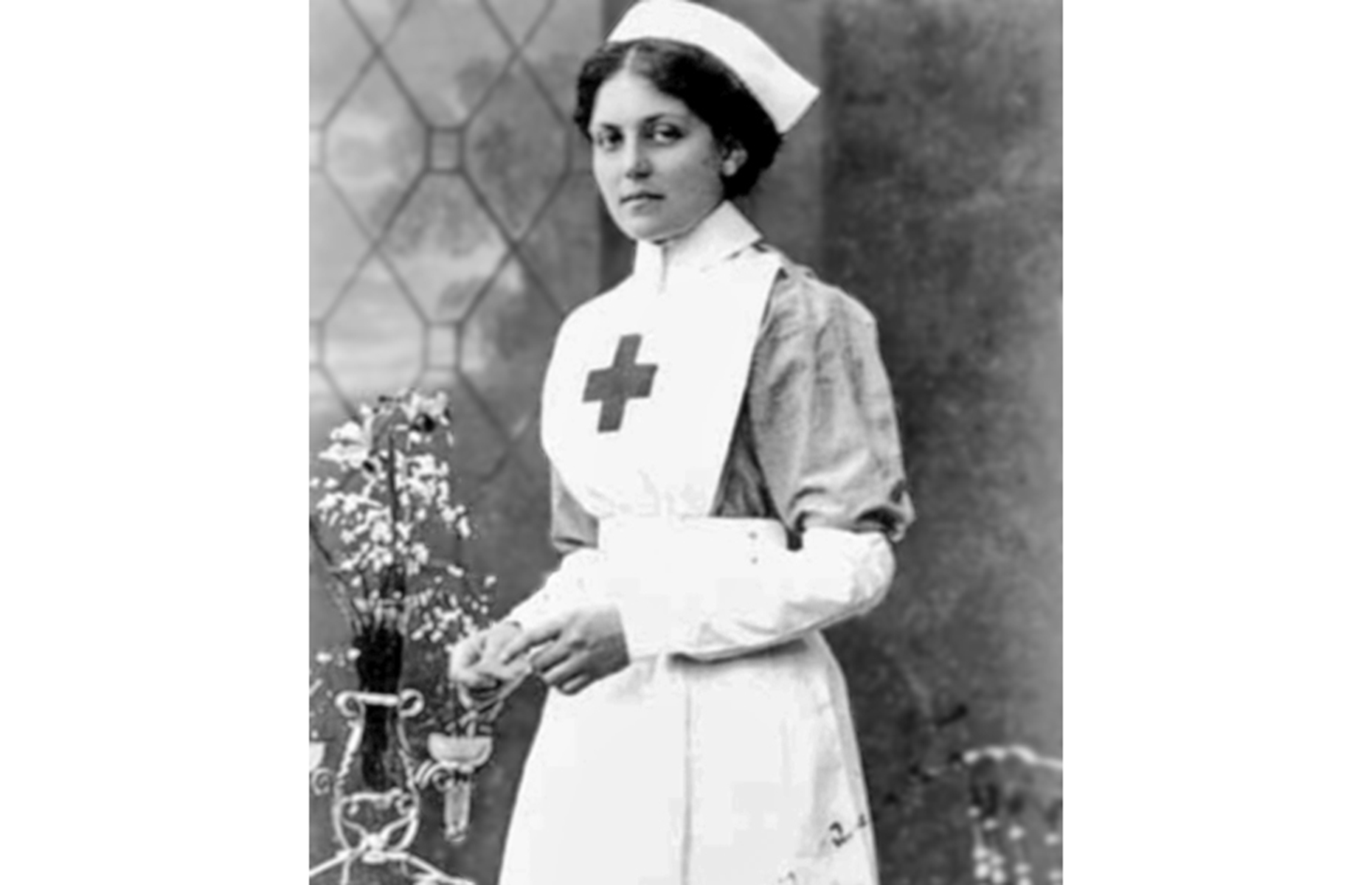 In 1911, she was onboard the RMS Olympic when it ran into a British warship, the HMS Hawke, off the Isle of Wight, UK. The side of the Olympic was punctured but no lives were lost. 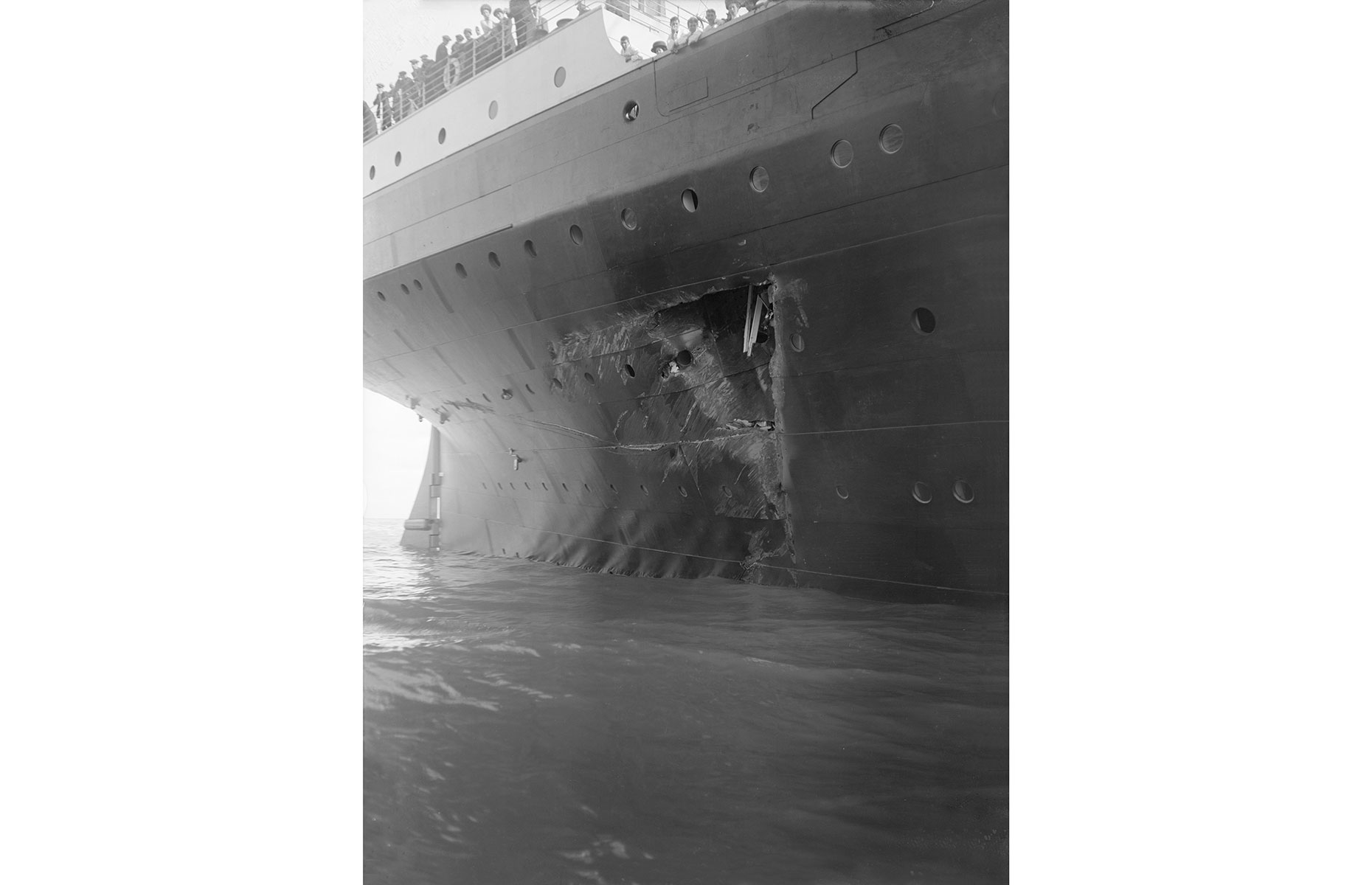 Aged 24, Violet was also a stewardess on the RMS Titanic and helped passengers onto lifeboats. She survived the sinking and was taken to New York on the rescue ship Carpathia.

And then in 1916 Violet showed extraordinary bravery during the HMHS Britannic’s accident. Leaving on one of the later lifeboats, Violet was pulled in by the suction of the propellers and hit her head.

Luckily she was pulled into a lifeboat and saved.

After the war she continued to work on ships and had certainly earned her nickname of “Miss Unsinkable”. She passed away aged 83 in the early 1970s.