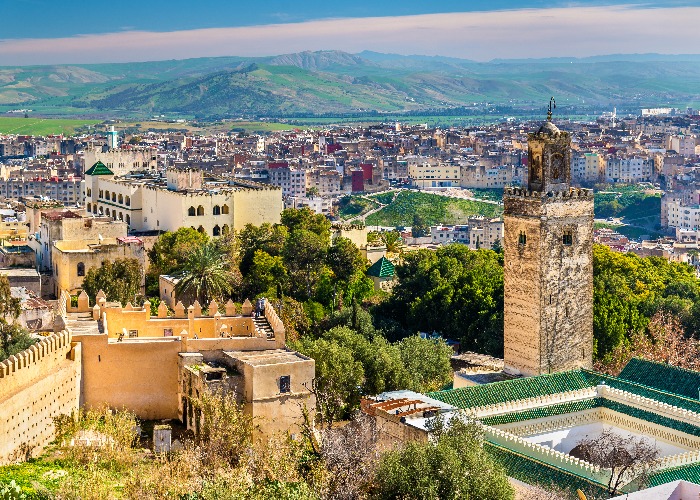 A labyrinth of sprawling souks, intricately tiled mosques and sand-blasted medieval walls, Fez is a rare window into the middle ages.

An important cultural centre since the 11th century, the city’s enormous UNESCO-heritage medina is one of Morocco’s most atmospheric and chaotic. Spend your days wandering its endless alleys, bartering with old-world artisans and your nights sipping mint tea on a riad rooftop. In Fez, the city itself is the attraction.

Split into three distinct areas – Fez el Bali, Fez el Jdid and Ville Nouvelle – for a long weekend, you’ll want to stick to the oldest part of town, Fez el Bali. Here’s how to immerse yourself in the city’s infectious madness.

READ MORE: Explore Marrakech: what to see, where to stay and what to do in the Red City

Check in at: Riad Dar Adam. Quiet, calm and elegant – in a slightly frayed, shabby sort of way – this simple riad puts you right in the heart of the old medina. Peaceful rooms are decked out with hand-crafted brass lamps, traditional Moroccan instruments and the cultural robes typical of Fez. Its cool, shady courtyard is exactly the welcome you want after a day in the souks, but the best bit is up on the roof – the terrace offers unhindered panoramic views of Fez el Bali and the mountains beyond.

If you’re after up-market, opt for Riad Kettani, a luxury guest house close to the Chouara Tannery. Its beautifully decorated central courtyard might just be the finest in the city. 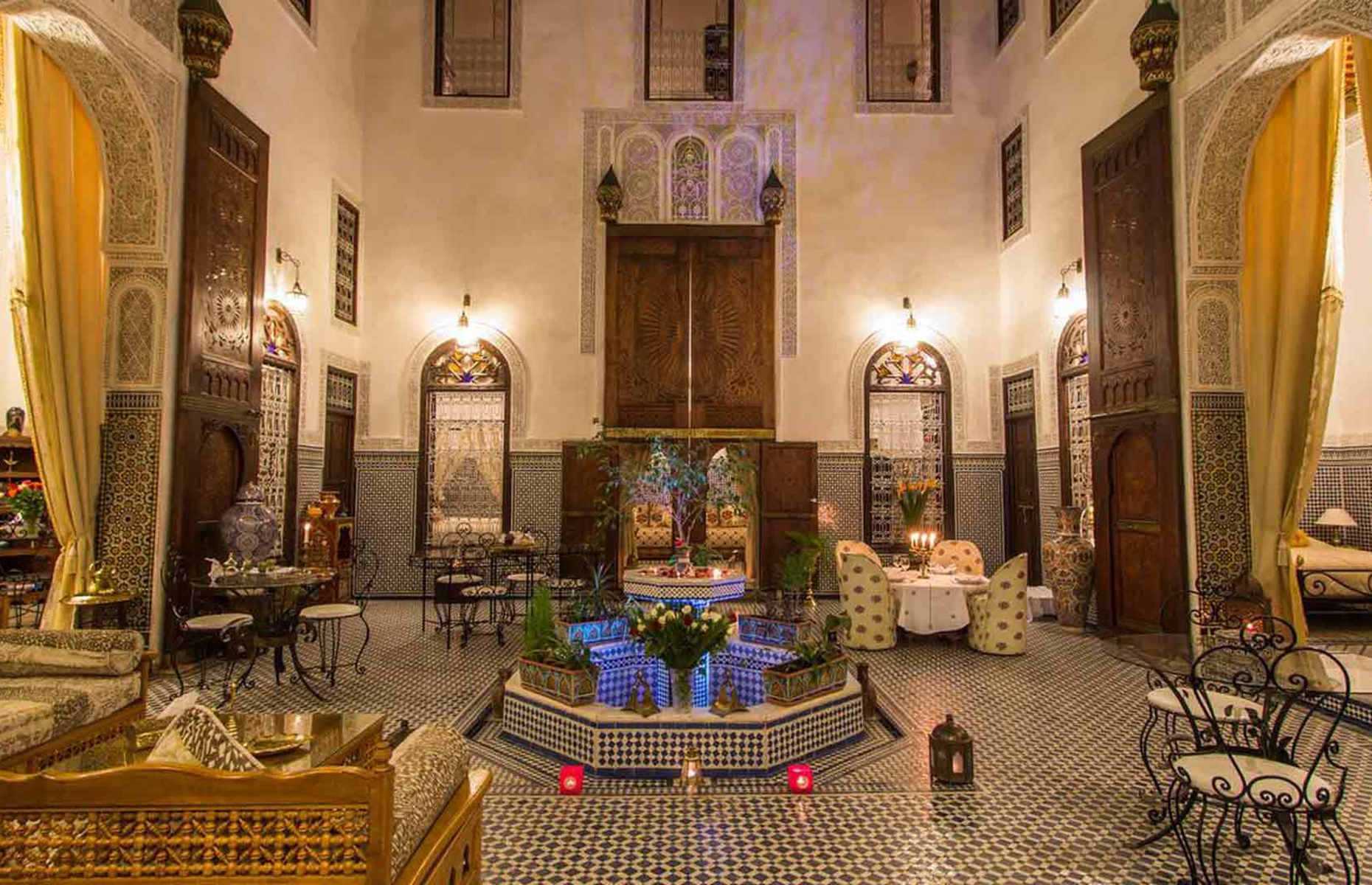 Spend the day wandering: in the souks. Losing yourself in Fez isn’t a cliché, it’s an inevitability. Wrong turns, dead ends, a chorus of “it’s closed” from fake guides trying to steer you towards a friend’s shop – at times, navigating the medina can feel like a Crystal Maze challenge. But don’t be daunted, the best way to adjust is to throw yourself into it. You’ll be surprised how quickly dodging donkeys and porter-drawn wheelbarrows becomes second nature.

To get your bearings, start the day at the cobalt-tiled Bab Bou Jeloud (The Blue Gate), the grandest entrance to Fez el Bali and take Rue Talaa Sghira down into the heart of the medina. This lively street is a good intro to the souks: handwoven Berber rugs, leather slippers in every shade conceivable, intricate brass lamps, fake football shirts, bottle after bottle of Morocco’s signature cosmetic argan oil… every inch of wall space is for sale, as the shop owners will remind you constantly. 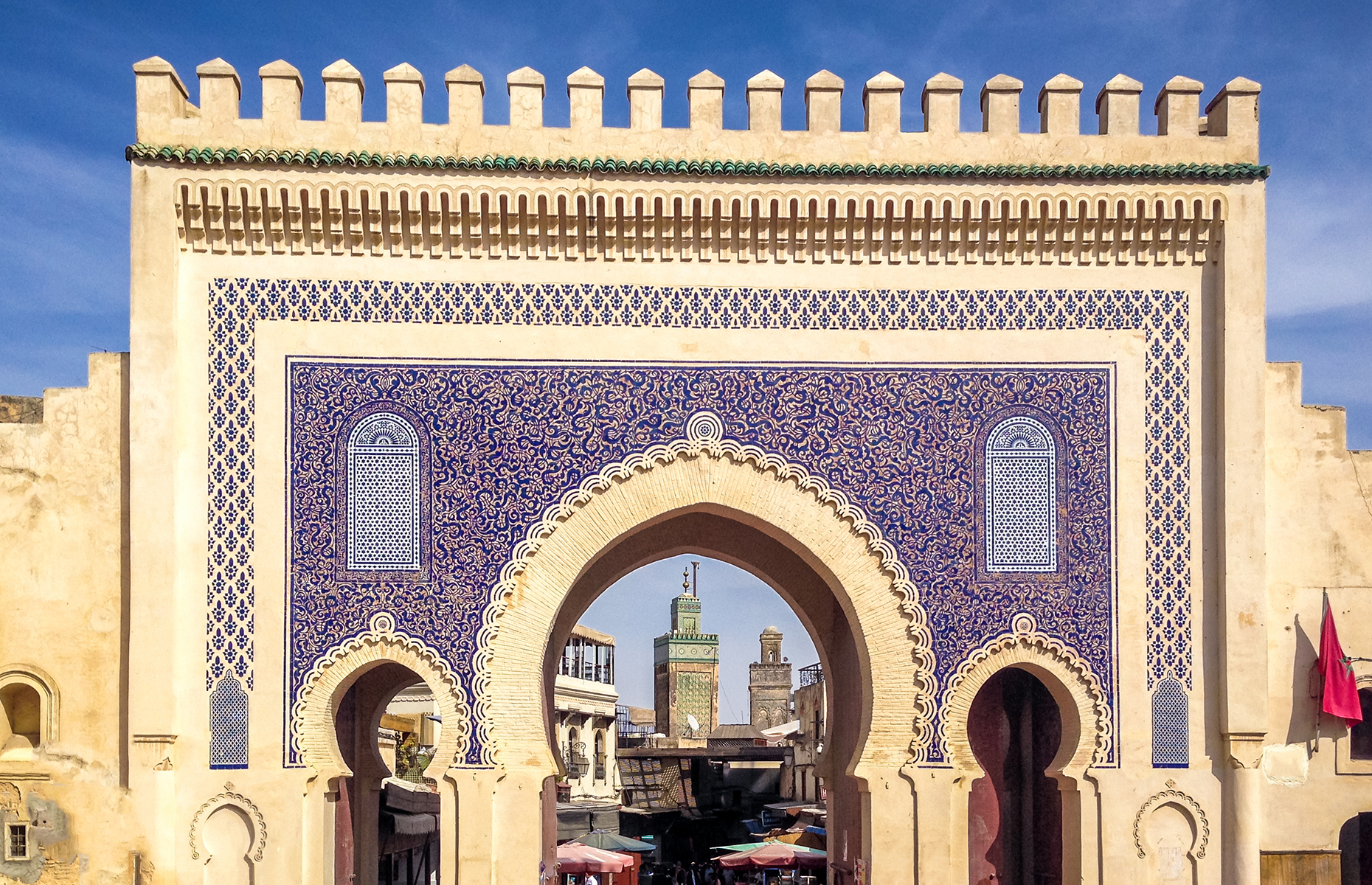 After a winding descent, you’ll come to the end of the street – turn right until you get to the Souk Al-Attarine. From here to the R’cif Mosque you’ll find the most interesting souks. On first impressions, Fez feels like one enormous market. Actually, it’s many individual souks woven together into a vast patchwork of artisans.

Take your time and wander aimlessly. Stumble upon carpenters hard at work on an ornate wood panel, let the sound of clanging metal lead you to the coppersmiths of Place Seffarine, or follow your nose to the freshly dyed hides of the tanners. 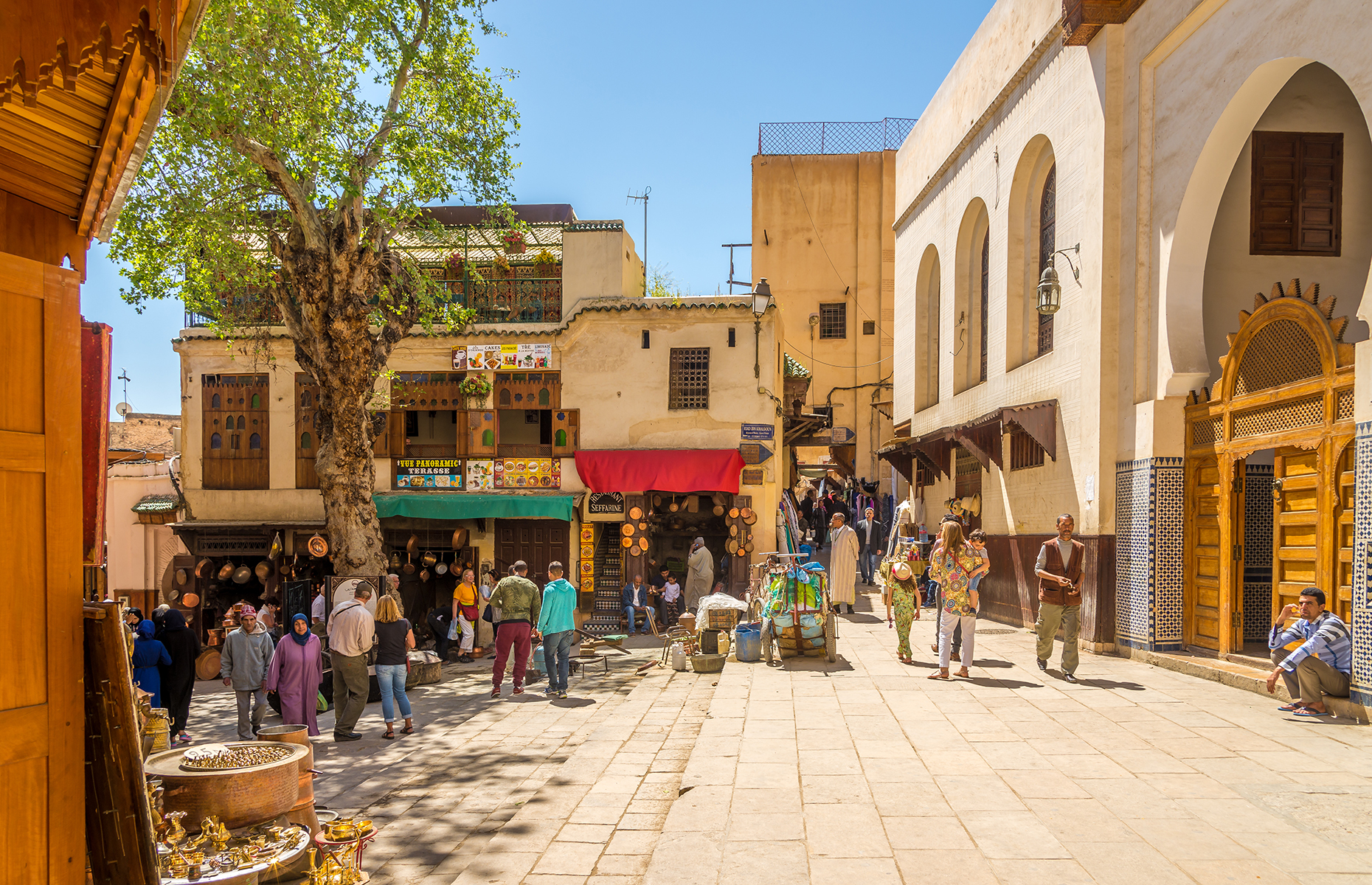 You might find yourself amid never-ending rows of fruit and veg, shopkeepers hidden behind mountains of fresh mint or surrounded by butchers’ stalls, where marbled chunks of meat – and the odd camel head – hang from metal hooks. The raw smells, unfiltered noise and frenetic energy – this is Fez at its most atmospheric and exciting.

Top tip: App MAPS.ME uses GPS to track your route real time, so you’ll always be able to find your way in the medina. If you’re not confident wandering about on your own, hiring a guide is an excellent way to explore the city. Most riads will know an official guide or where you can arrange one.

Catch a spectacular sunset: from the Merenid Tombs. No city calls it a day quite like Fez. Watch the lights replace the sun, as a fantastic pink dusk settles over the city's innumerate roof terraces and flocks of starlings arch their ritual evening dance above. 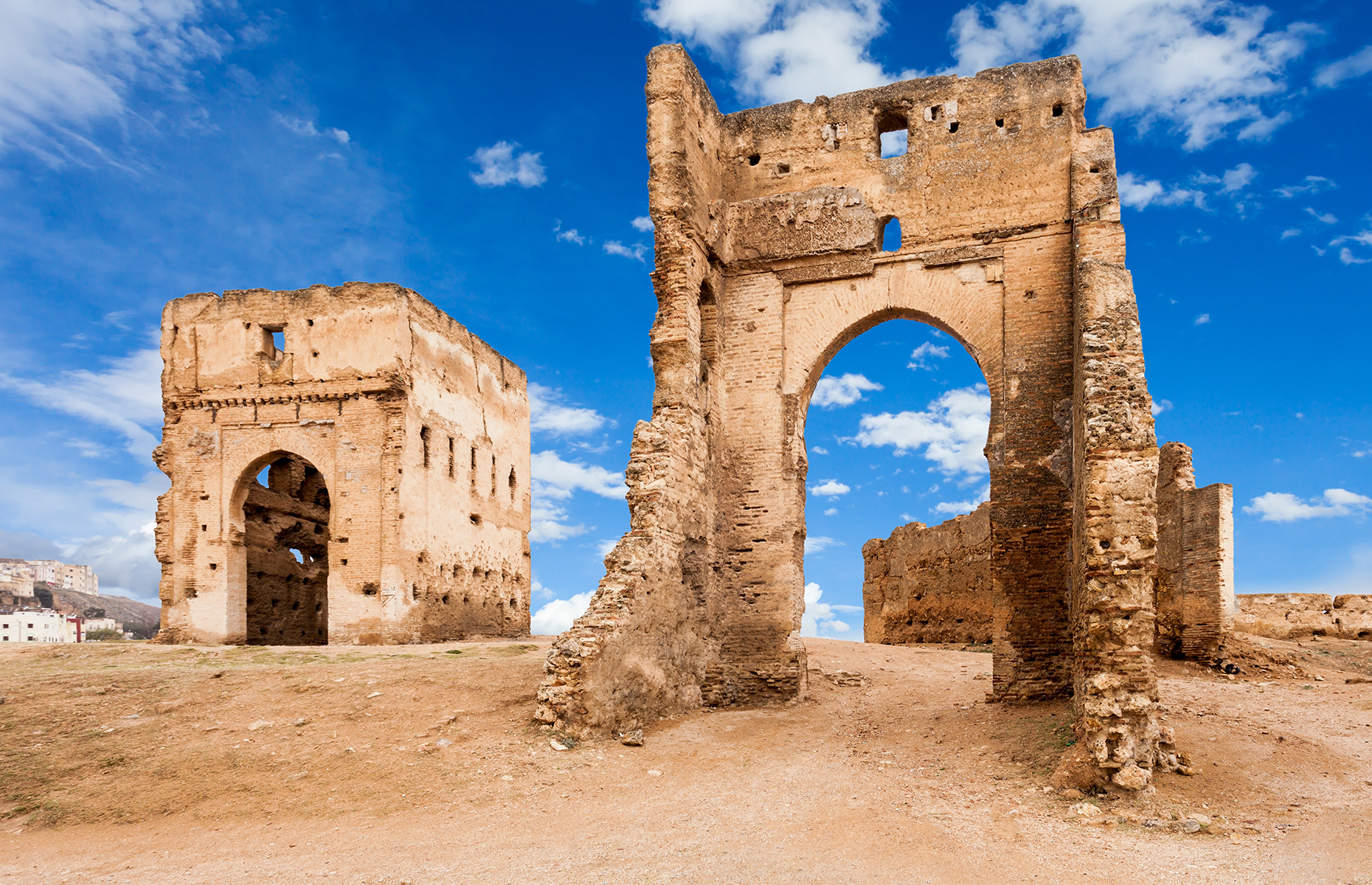 Just as night begins to fall, the hauntingly beautiful call to prayer erupts, one by one, from Fez’s countless minarets. The muezzins' words echo around the roofs, bouncing off the mountains which surround the city like a bowl. Just as the sound reaches a crescendo, the call ends and street noise seeps back into focus.

It’s a 15-minute walk to the Merenid Tombs from the Blue Gate. Head up around 5.45pm to catch the show in full.

READ MORE: These are the world's most beautiful small towns

Step into the past: at the tanneries. Dating back to the 11th century, Fez’s leather trade is almost as old as the city itself and the methods used haven’t changed much in that time either. For a sensory glimpse into this ancient practice, head to the Chouara Tannery for a sight (and smell) you won’t forget in a hurry.

The tanneries are at their most evocative and intriguing in the morning, when the sunlight highlights the colourful wells of dye and the tanners push the fresh animal hides down using their legs, bodies half submerged in the solution.

While the smell might make you gag – a cocktail of natural elements, including fermented pigeon excrement and cow urine, is used to soften the hides before dying – there’s something strangely beautiful about the process and its preserved tradition. 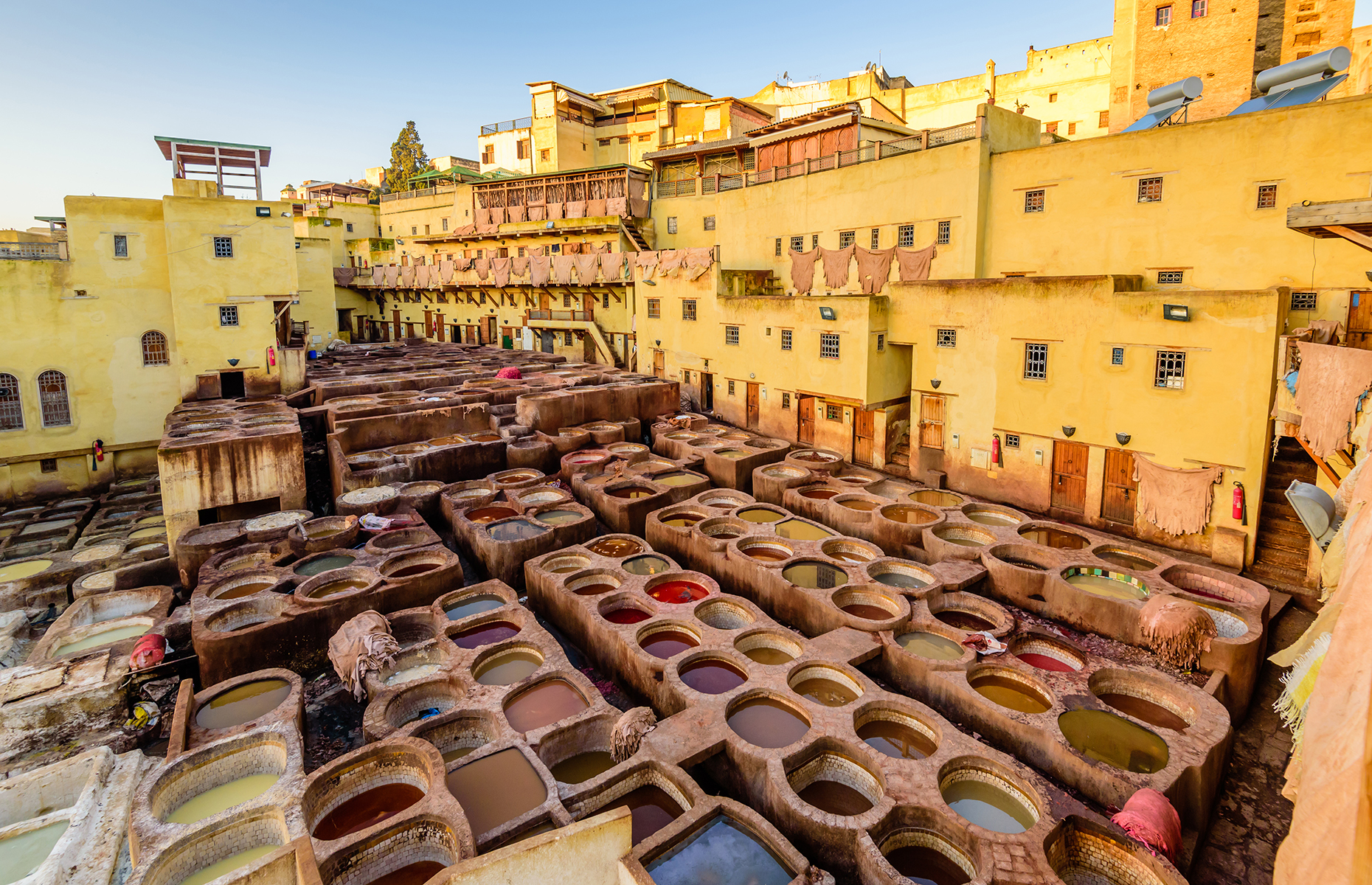 Top tip: The leather shops surrounding the tanneries all have viewing terraces that you can access for a small fee of around 10 dirhams (around £0.80). Number 10 has some of the best views.

Explore: the city’s scholarly side. Fez’s medersas (religious schools) offer a rare chance to see inside the Islamic buildings of Morocco. In fact, the recently renovated Bou Inania Medersa is still used as a working mosque.

Commissioned by Sultan Abou Inan to rival the great University of al-Qarawiyyin (also in Fez), its cost is legendary – and it shows. One of the grandest schools in the country, its large courtyard is a masterpiece of Islamic design, with spectacular zellige tiles, intricate stucco work and impressive cedar wood carvings covering its walls entirely. The meticulously carved woodwork alone is worth the small entrance fee. 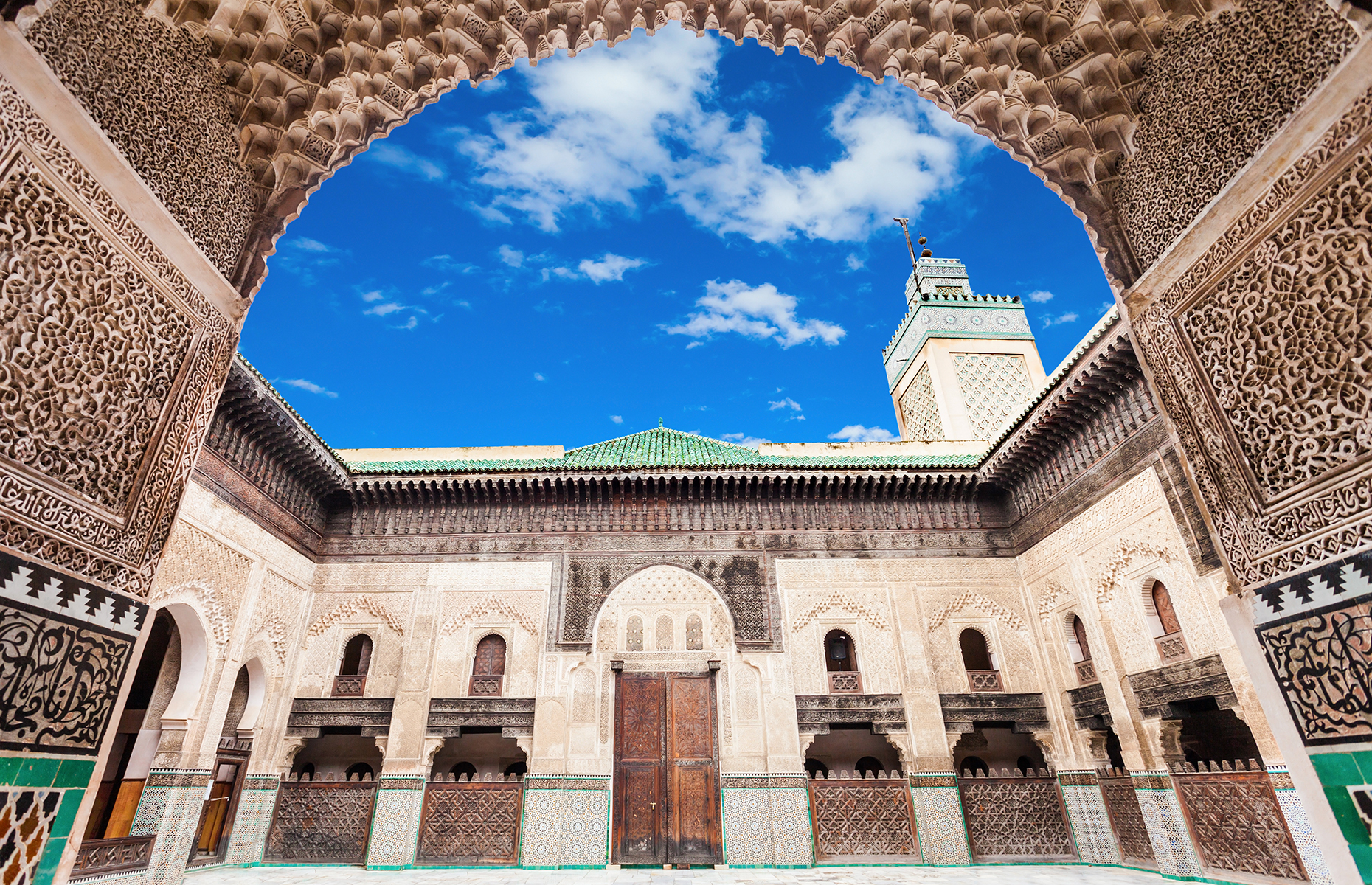 Next, make the short walk down to the Al-Attarine Medersa, next to the mosque and souk of the same name. Also built in the 14th century, it’s much smaller but its interior is no less elaborate. After another ambitious renovation project, the student cells overlooking the courtyard are now open to visitors. Go early enough and you’ll have the place to yourself.

Eat dinner at: Made in M-Fes. After a day’s madness exploring the medina, this calm little café is the perfect place to unwind. Plonk yourself down on its comfy couches and enjoy classic Moroccan food in an unfussy, contemporary setting. Dishes include briouat (think Moroccan spring roll) and flat breads stuffed with mozzarella and aubergine, as well as the usual suspects of tagine and couscous. Mint tea to finish is, of course, obligatory. Right on Rue Talaa Kebira, it’s just a short walk down from Bou Inania Medersa.

Learn more about local craft: with a visit to Art Naji. Hit the tiles Moroccan style with a free guided tour of this ceramics and pottery co-operative. See first-hand how the intricate mosaics and delicate tile work that adorn many of Fez’s most beautiful buildings are made, with demonstrations by local potters, tile makers and mosaic artists.

Tours end in the three show rooms – or “Ali Baba’s cave”, as the guides like to say – where you’re free to peruse the staggering collection of crockery, tiles, vases, fountains, lamps and tagines without the usual pressure to buy. See something you like? Art Naji will arrange to ship it for you.

To get there, take a petit taxi (shared taxis in Morocco) the taxi rank near Dar Batha. It shouldn’t cost much more than 12 dirhams (£0.98), but as many Moroccan taxi drivers are seemingly allergic to using their metre, ensure you agree a price in advance. 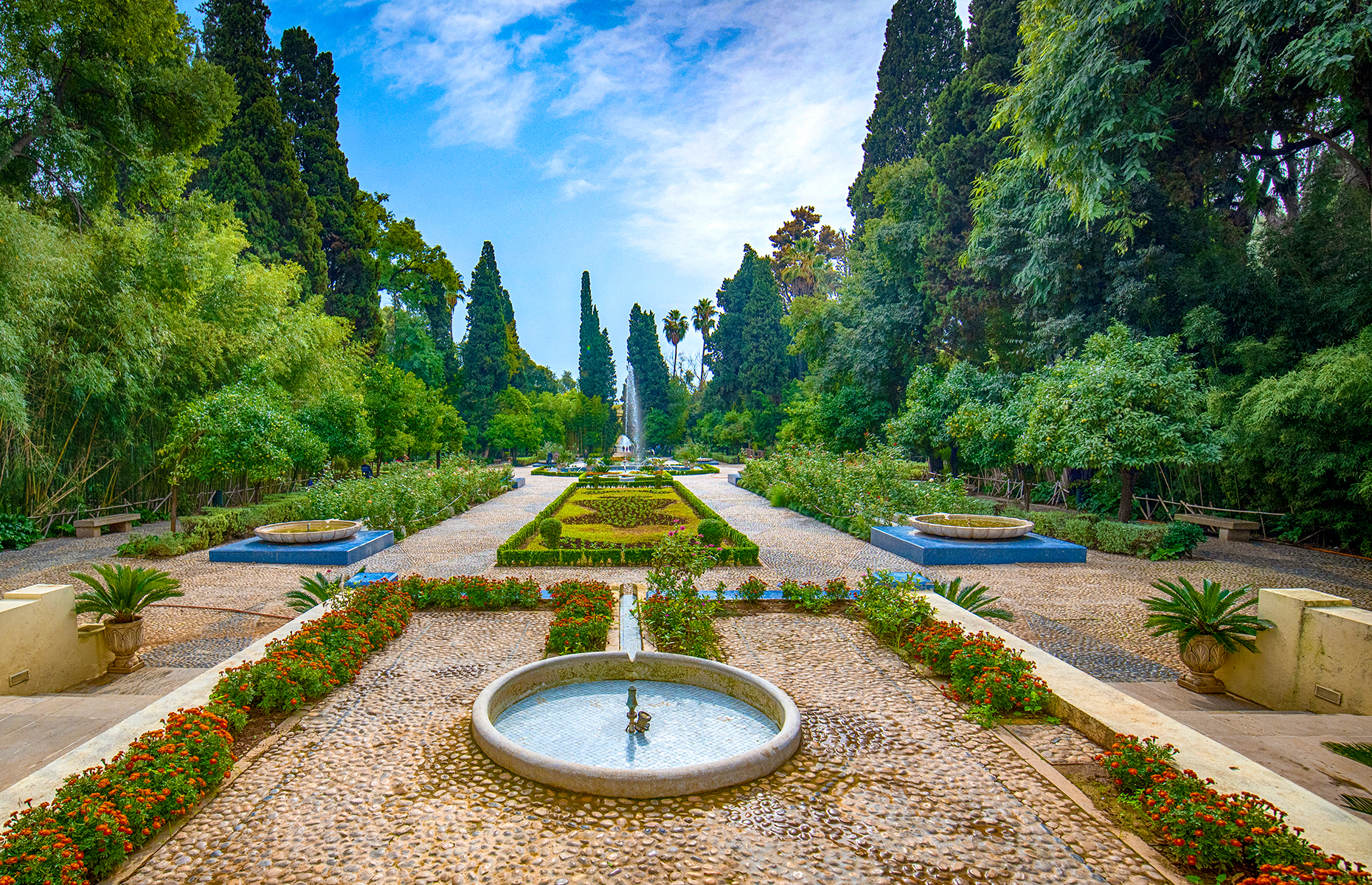 The park runs parallel to Fez el Jdid, the 'new' part of the medina (it was founded in 1276), which is worth a wander for its impressive fortified walls and imposing gated entrances. To find the gardens, head to Dar Batha, near The Blue Gate, and just follow the signs from here.

Have a local lunch at: Café Batha. Join the locals for mint tea at this no-frills café, just off Dar Batha. The lentil soup, cooked by tagine, is simple Moroccan food at its best.