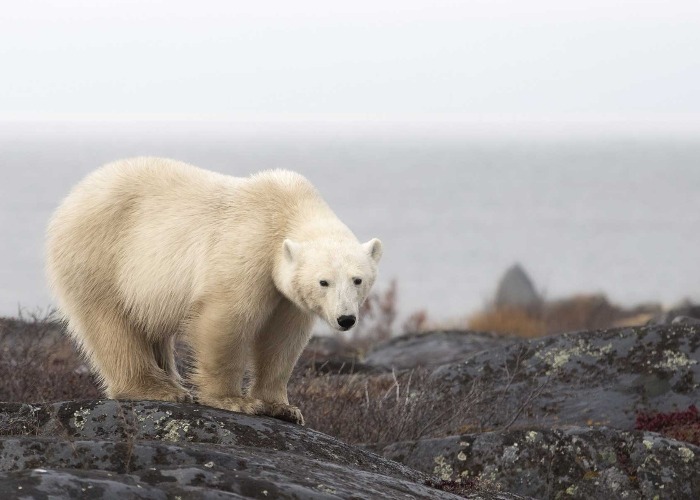 Churchill’s claim to be the polar bear capital of the world isn’t without foundation, but this remote spot in Manitoba faces a set of unique challenges. Here writer Georgia Stephens reports on how street art has breathed life back into this town on the edge of the Arctic.

Miss Piggy has seen better days. The skeleton of the C46 cargo plane lies across rocks spattered with rust-coloured lichen, controls open to the elements, weeds pushing up between her joints, one wing cracked from the impact of the crash. Better days. 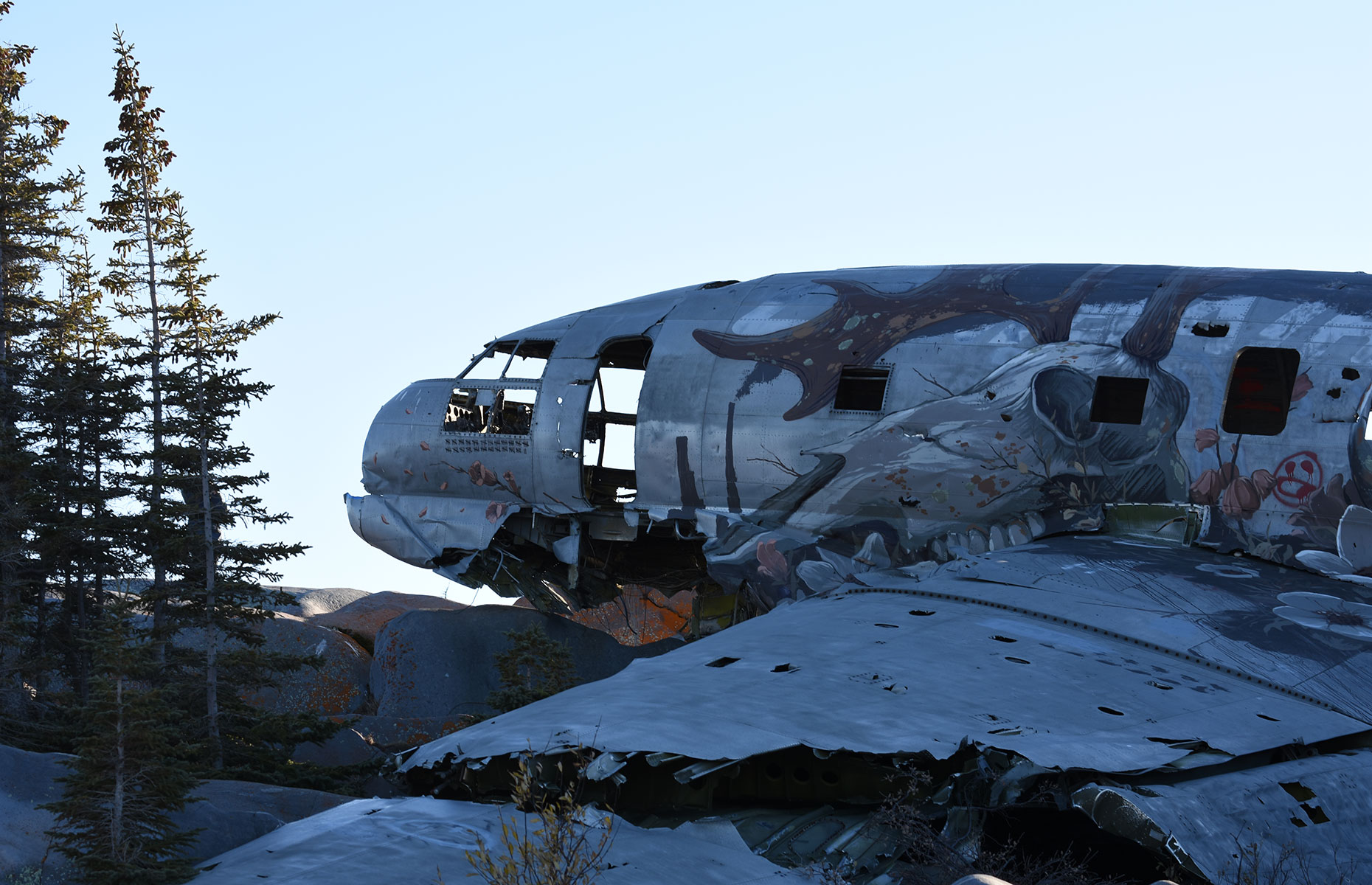 I’m in Churchill on the boundary of the Canadian Arctic, 600 miles north of provincial capital Winnipeg. Beside the downed aircraft is Paul Ratson, a stocky, no-nonsense Canadian wearing a flat cap and dark glasses, carrying a shotgun slung over one shoulder. He hitchhiked on Miss Piggy, back in the days when one could do such things.

“They named her because she flew like a pig,” he spits, turning his back on the wreck. He shrugs: “The pilot always told me as long as she was shaking, rattling and rolling, it was all good”.

Daubed across one side is now a macabre mural depicting moose and human skulls resting in a bed of pink and yellow flowers. A remnant of a street art festival, says Paul.

READ MORE: 50 photos that will make you fall in love with Canada

In June 2017, eighteen renowned street artists descended on Churchill as part of the SeaWalls project to get to know, and ultimately illustrate, the unique challenges it faces. Framed by the cool light of the sub-Arctic sunset, the dilapidated aircraft feels almost like a memorial.

"Remarkably, there were no casualties when she went down. “She went out of here November ’79, lost an engine on a 250-mile run up to Chesterfield Inlet,” Paul explains. He has a booming voice and a habit of speaking quickly with rehearsed detail, learned from his years as a guide. “She tried to turn around and make it back to the runway, but her rear tyre did not retract. She snagged on a power line and was spun sideways." 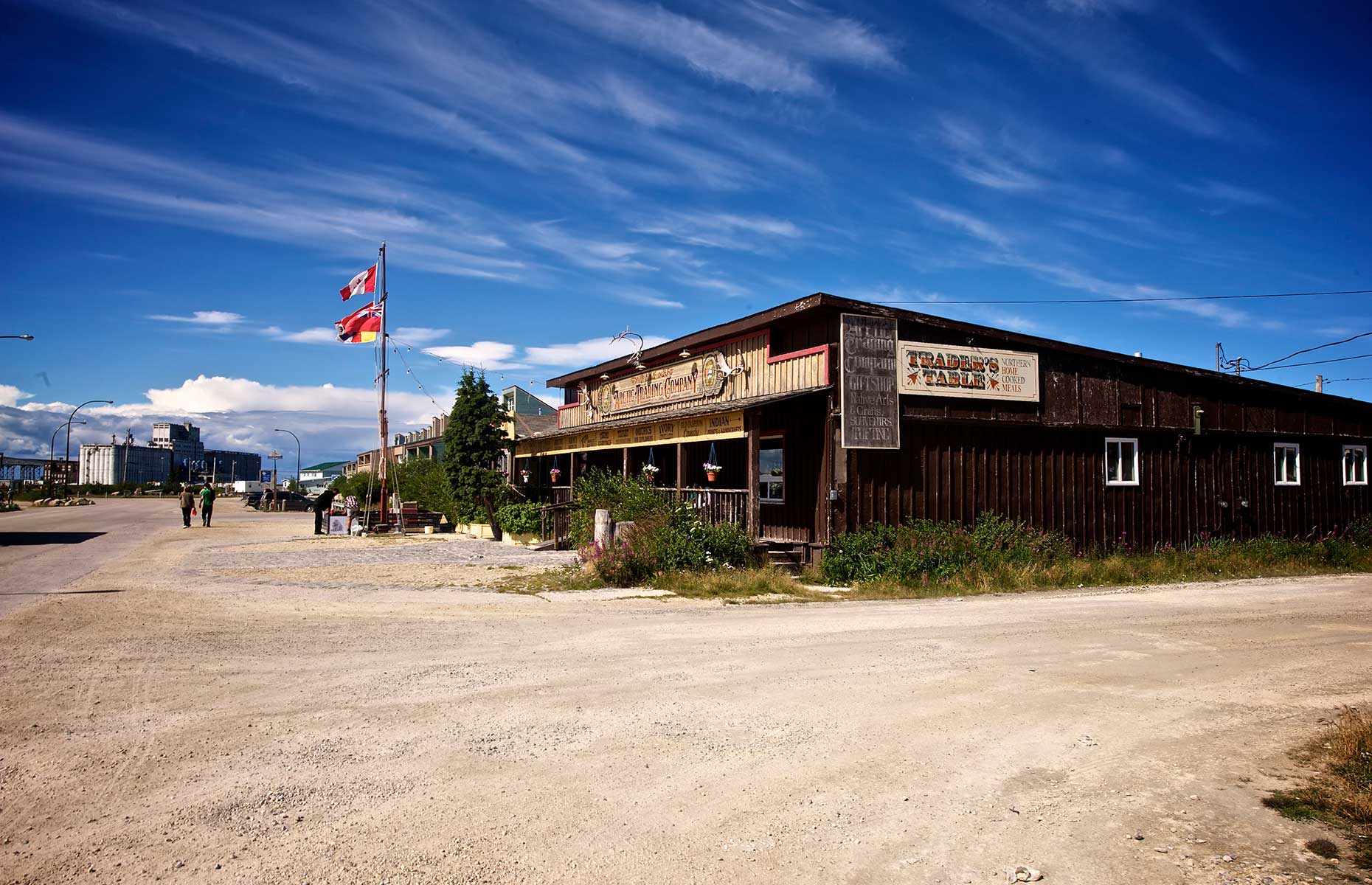 No roads connect Churchill to the rest of Canada, so it has to make do with what it can get by air or rail. Around it, boreal forest meets Arctic tundra, which in turn slips beneath the steely waters of the Hudson Bay. Beluga whales, wolves and moose can all be found here – as can polar bears. Churchill sits directly on the annual migration path of the world’s largest land predator. It’s October, and the bears have just begun to arrive.

The next morning I’m standing in the lobby of the Churchill Northern Studies Centre, my base for the next few days. A whiteboard scrawled with polar bear sightings catches my eye: “Aug 29 – male @ Ratson’s”.

I remember Paul told me it chewed the seat off his snowmobile.

From behind, Evan Roberts abruptly rounds the corner and asks whether I’m ready to head out. I have three layers tucked into my thermal underwear, so the answer is yes.

Evan’s a young ex-Winnipegger and Human Rights graduate, born again into the Churchill way of life. He has a tasselled blue hat pulled tightly down over wisps of ginger hair, and embroidered moccasins laced to the knees. In his hands, he’s clutching a polished silver shotgun with five shells slotted into the stock. See, everyone carries those things up here.

Evan works at the centre, a research facility for scientists, and is whisking me off on a tour of the murals around town. Miss Piggy, he says, was only the beginning. We clamber onto a bus and he fills me in as we make the drive along the gravel road into town. “It was all part of the SeaWalls festival last summer,” he says, shifting gear. “It happens all over the world – this was just the Churchill version”.

State of the art

SeaWalls: Artists for Oceans has created almost 300 murals across twelve countries to usher ocean conservation into the limelight. The town of Churchill is firmly anchored to the Hudson Bay, and over the years it’s struggled with the closing of its deep-water port and the effects of climate change. It needed help – and to get that it had to draw the eyes of the world.

We pull up outside a low building topped with two great, round eggs of pterodactyl proportions, ready-cracked as if awaiting some astronomical slice of toast.

It’s the old radar, from the days when this area was used as a rocket range. Filling one side, there’s a mural of a sombre member of the Sayisi Dene First Nation, overlooking a river of ribbons filled with stylised caribou antlers. In the midst of the river is a surreptitious label: Camp 10. 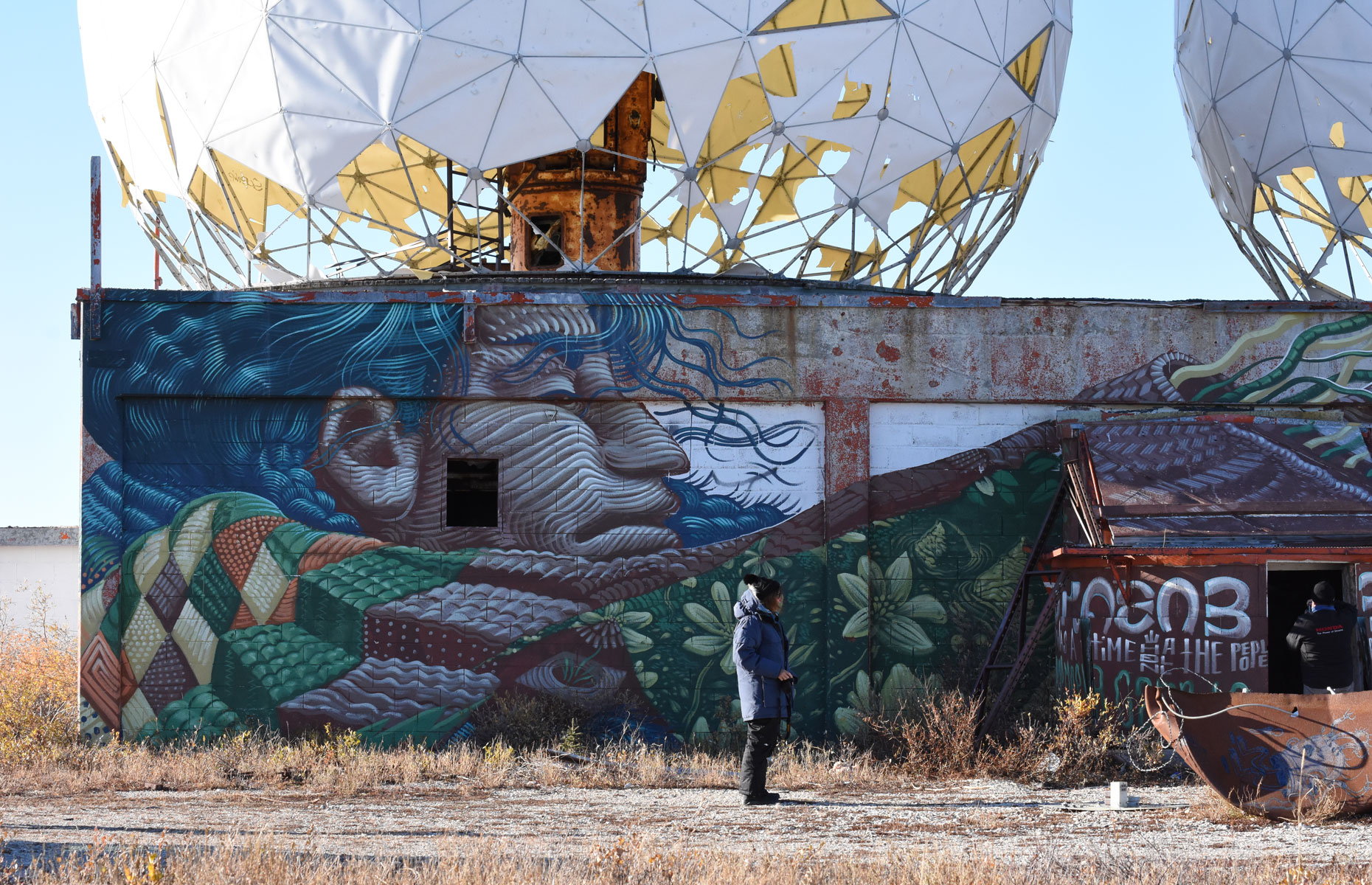 Evan explains that the mural is dedicated to Sayisi Dene First Nation peoples, who were forcibly relocated from their traditional land around the time the radar was operational, because they were incorrectly believed to have overhunted local caribou.

The community was moved into makeshift shacks with no heating, electricity or running water, and as a direct result just under half of the relocated population was lost.

Very few in Churchill still live a nomadic lifestyle, yet circumstance preserves some echoes of the past. “I would say a lot of people in town, whether they’re Dene or Metis or Inuit, still have some level of subsistence,” Evan explains as we hop back in the bus. “It’s very common for even people like me to go out and harvest a caribou to have meat for winter”. Harvest, rather than hunt – a necessity, rather than sport.

We’re almost into town and we pass another mural.

Evan doesn’t stop, he doesn’t need to – there are no subtleties to decipher. KNOW I’M HERE, it reads along the breadth of a low, corrugated building.

Just days before the SeaWalls festival, Churchill had been plunged into crisis. Unexpectedly severe spring floods, thought to be due to climate change, washed out sections of the rail track connecting Churchill with Winnipeg, severing its lifeline with the south. Groceries and other supplies had to be flown in, increasing prices tenfold. In the supermarket a carton of milk is £5.60 (CAN $10). 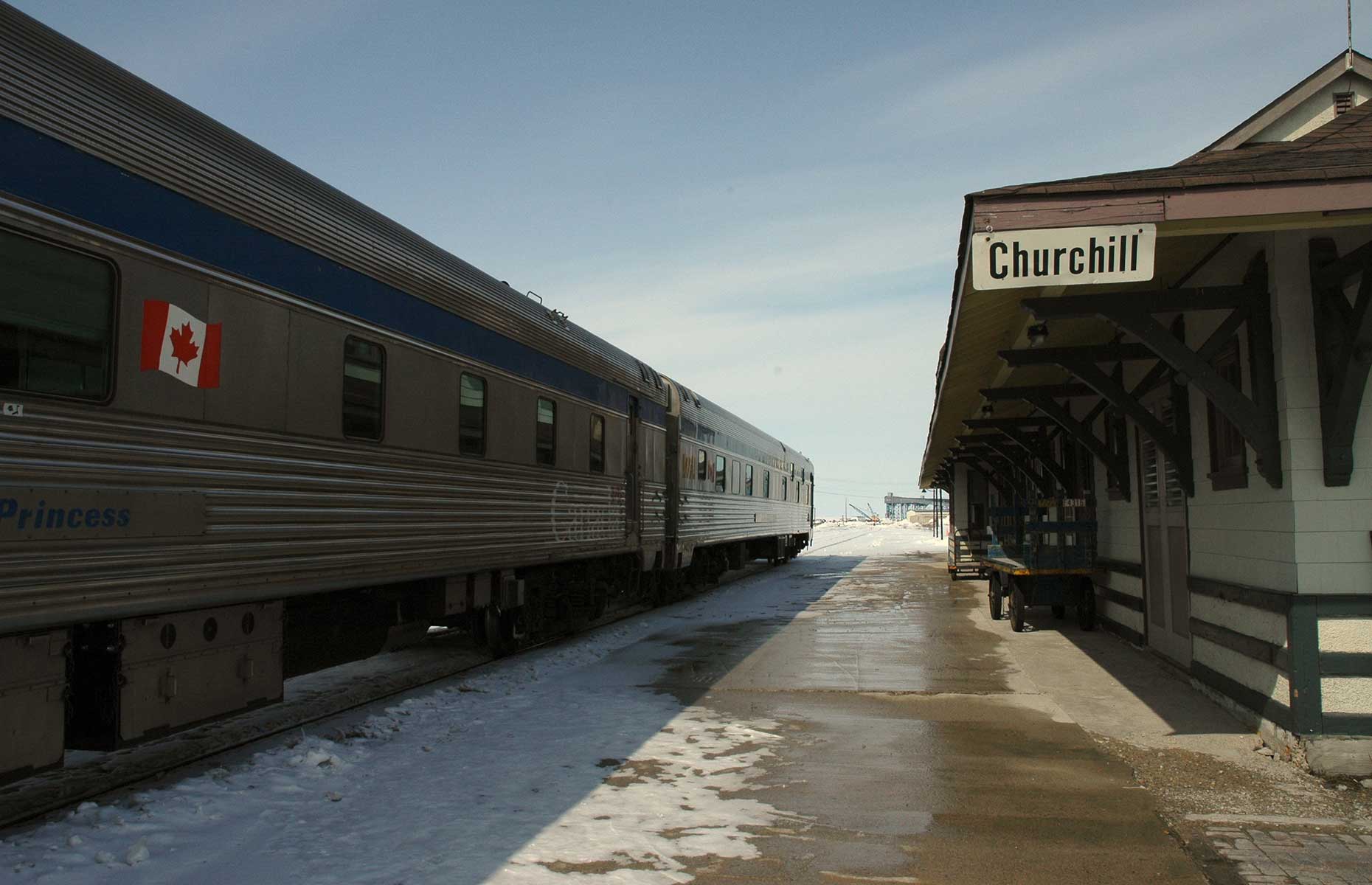 Over a year went by while the federal government and OmniTrax, the owner of the rail line, bickered over who should fix it. In town, there was talk of abandonment. “Despair was felt in the community. We relied on it for freight, but also as an affordable way to travel,” Evan explains as we pull up near Kelsey Boulevard, Churchill’s main street. “But I think in a way it’s been a very unifying time. Even the festival was affected by the closure – the train couldn’t bring up supplies like brushes and 500 cans of paint. We had to pull together and share what we had.”

In front of us is a colossal polar bear stretching on its hind legs to the peaked roof of a two-storey building. It wears a passive expression, yet its forepaws are as big as cars, extended as if ready to swipe. “This piece is titled The Power of Nature,” says Evan. Too right, I think. It was designed to make those who behold it feel small.

It has a bold, kaleidoscopic design, composed of bright shards of colour: reds, blues, greens, yellows. It was the first SeaWalls mural to go up, and the community came out at midnight to watch. Such a splash of colour in this otherwise grey landscape would be enough to lift anyone’s spirits. “This was probably my favourite moment from the festival,” Evan says, smiling up at it. “A Dene elder came out to speak to the artist, who doesn’t speak much English, and they’re communicating as best they can. And they’re just bonding over this crazy, geometric polar bear in the centre of town.”

The sun is beginning to wane, and we’re rumbling along the gravel road towards Churchill’s former port, passing derelict buildings and frames of rusted-out machinery. The Hudson Bay is on my right and it’s grey, sea and sky merging at some unknown point on the horizon. Everywhere there are patches of willows and wild grasses pushing up from between low, flat rocks. It’s wild, yet industrial, country.

We drive right past it at first – our final mural. I don’t realise until Evan hits the brakes. A workman, bearded and wearing a fluorescent yellow vest, is balancing on the metal rail of a train track, arms outstretched as though walking a tightrope. Behind him, five others follow.

Churchill is dependent on nature, its lifeline with the south bolted to permafrost, its bears – the mainstay of its tourist industry – reliant on sea ice. Life is fragile here, and changing fast. In a way, Churchill is now walking its own tightrope. But unlike Miss Piggy, it’s still here – shaking, rattling and rolling.

A Lords of the Arctic learning vacation at Churchill Northern Studies Centre costs £1,995 (CAN $3,415) including a room, board and activities. Flights must be booked separately via Air Canada and Calm Air.