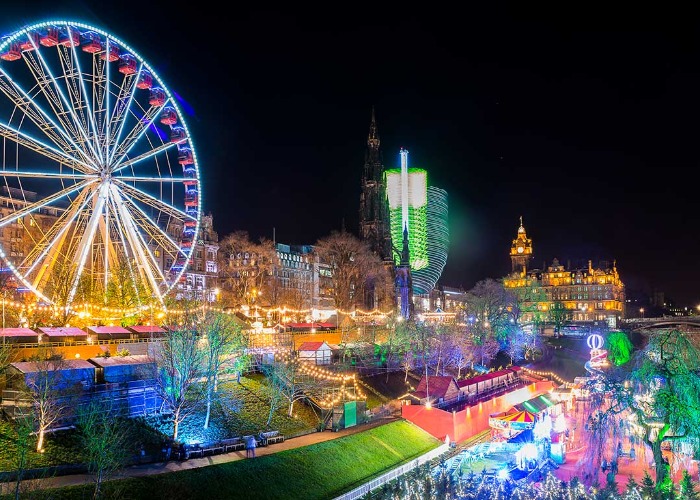 Twinkling lights, log cabin stalls and hot mulled wine – there’s nothing like a Christmas market to get you feeling festive. We’ve rounded-up the best homegrown events for seasonal shopping.

While the traditional Advent markets in the likes of Austria, France and Germany may prove tempting, the quality of those held at home has seriously stepped up in recent years. So forget socks and smellies from the high street and seek out these six festive hot spots that will make shopping a pleasure. ‘Tis the season, after all…

When: 22 November until 9 December

The main event: Bath Christmas Market is held on streets by the Roman Baths and Bath Abbey. The 2018 edition will feature 200 wooden chalets. Most traders are from England’s south-west selling quality fair trade goods and handcrafted products. If a bottle of local booze appeals, opt for a Somerset cider or gin distilled in Bath. 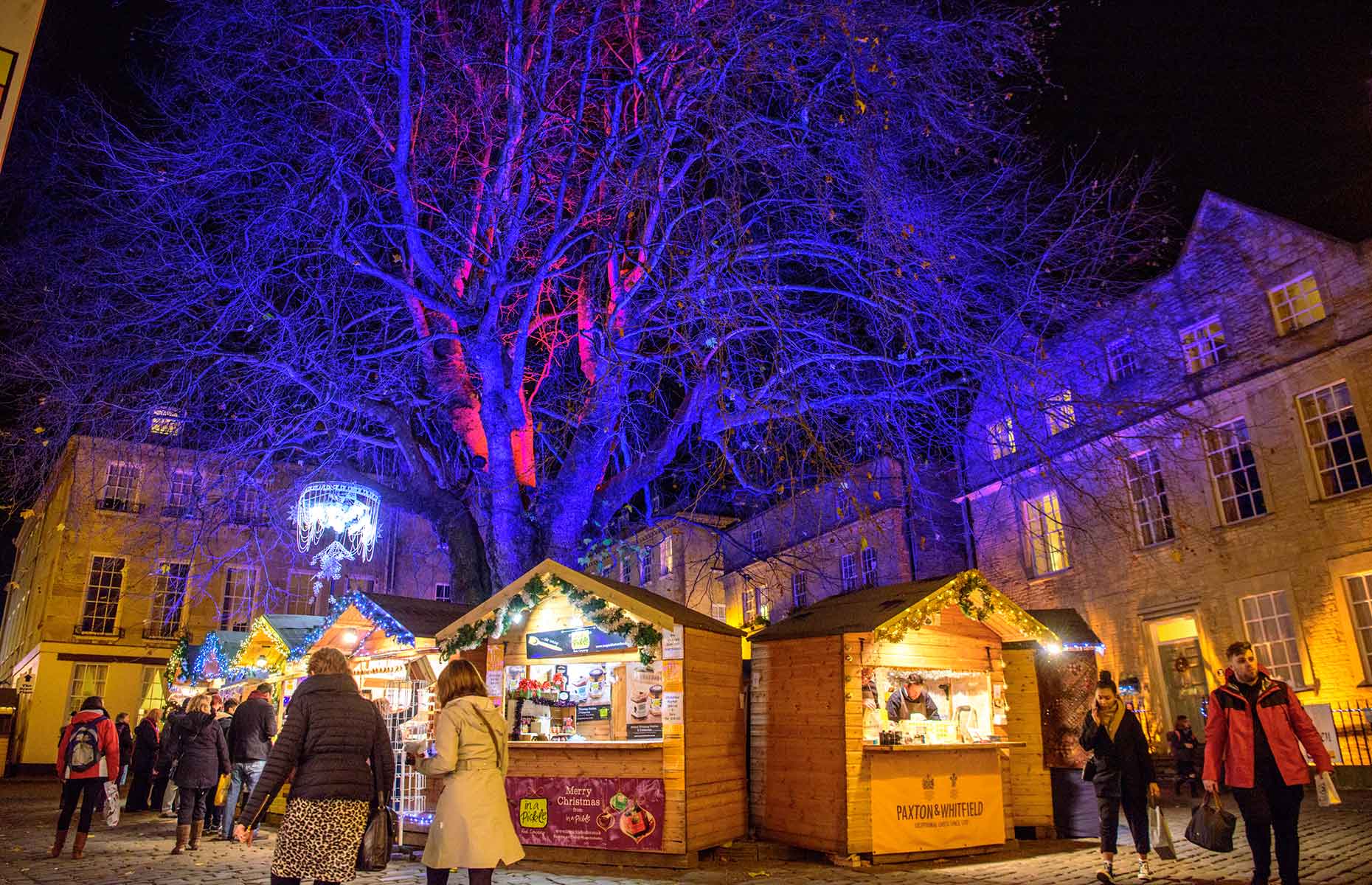 What else to see: It might be wise to save trying the local tipples until after going ice-skating. Until 6 January a vast open-air ice rink will be open in Bath’s Victoria Park, costing £11 for adults and £10 for children. Bath on Ice also features glow in the dark mini-golf, costing £6.50 for adults and £5.50 for kids, on a subtly illuminated 18-hole course. Mulled wine and comfort food, such as pizzas baked in a wood-fired oven and loaded fries, count among items on the menu at the cosy Alpine-style bar.

READ MORE: 31 brilliant festive days out in the UK

The main event: Birmingham’s Christmas market is the biggest in Britain, attracting around five-and-a-half million visitors. Stallholders come from Frankfurt am Main, meaning Birmingham claims the largest German Christmas market outside of Austria and Germany.

Wooden stalls will be along New Street and on Victoria Square, in front of the town hall that was built to resemble a Roman temple. 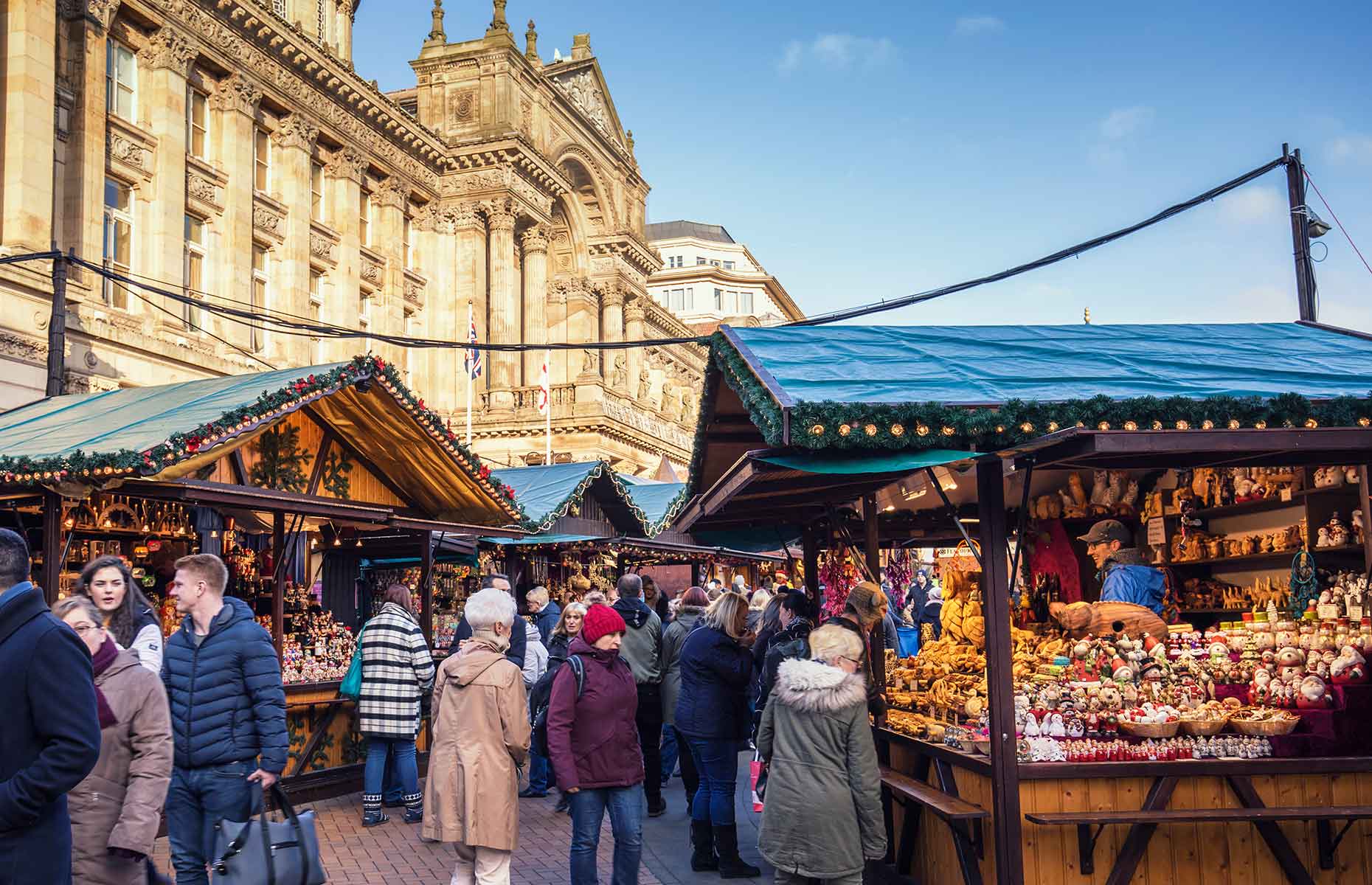 The square around Birmingham’s St Philip’s Cathedral will also host stalls, with the Georgian place of worship the centrepiece of an outdoor market with a Santa’s grotto.

What else to see: When you’re all spent out, pop inside the free-to-enter Birmingham Museum and Art Gallery and marvel at the Staffordshire Hoard, a huge treasure of gold jewellery that was buried for 1,400 years.

The main event: The Padstow Christmas Festival draws thousands of visitors to the fishing port on Cornwall’s north coast. Held over four days, this is one for foodies. Celebrities Paul Ainsworth, Nathan Outlaw and Rick Stein are among over 60 chefs that will be giving cookery demonstrations. Events held on the festival stage and theatre are free to attend.

The habourside market features more than 100 stalls. Craft beer, bottled preserves and Cornish duck count among the culinary products that you can sample and buy. 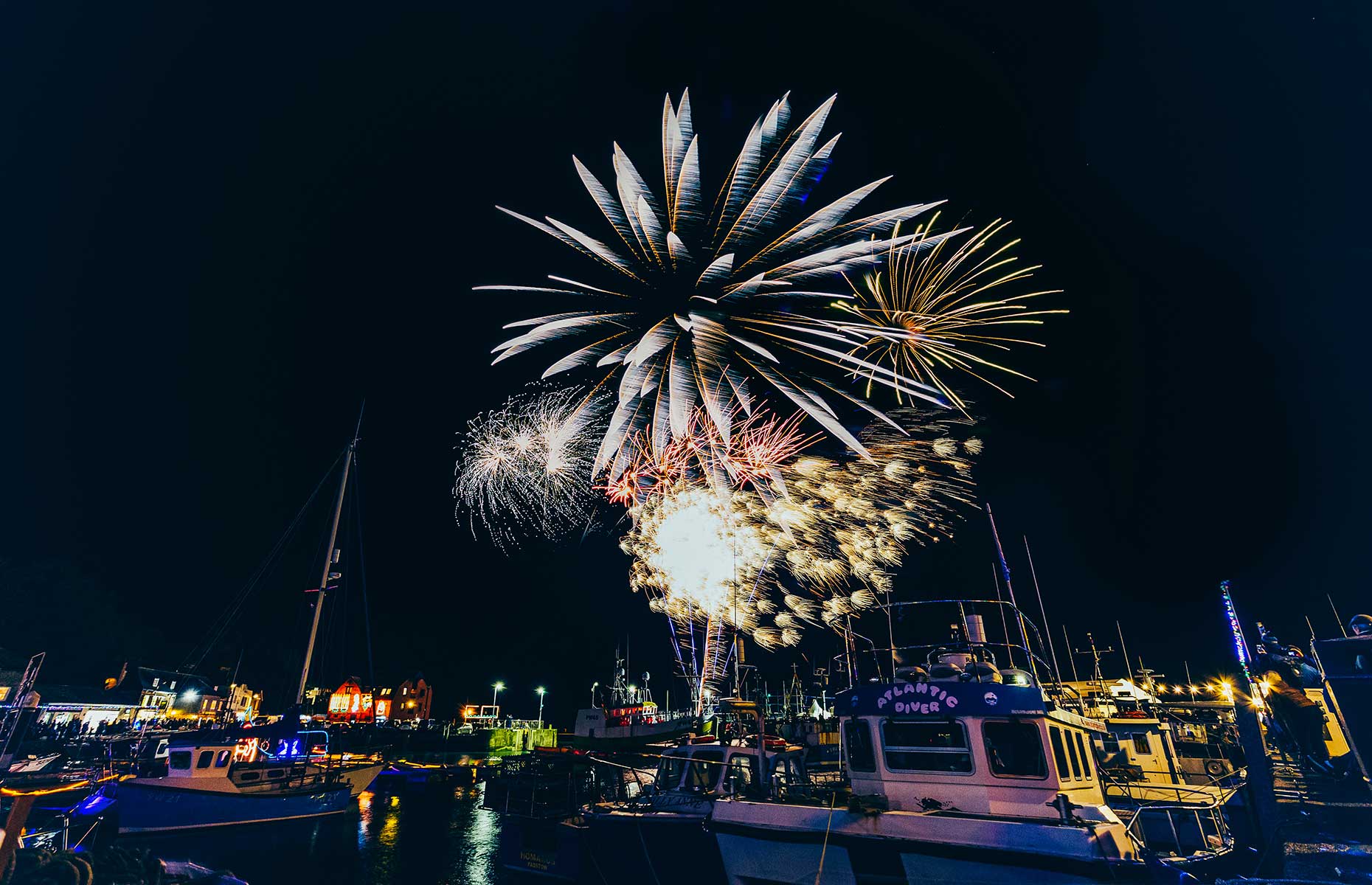 What else to see: The town’s streets will also host a Santa fun run and cycle ride on the Saturday. But the highlight is the fireworks display planned for the Friday night with a lantern parade and carol concert also taking place after dark.

When: 22 November until 6 January

The main event: Like the idea of gift shopping followed by a mulled wine or beer? Hyde Park Winter Wonderland is within walking distance of Oxford Street’s stores. Featuring edgy circus acts and family shows, Winter Wonderland stays open until 10pm, except for Christmas Day. If the rustic bars and restaurants of the Bavarian Village don’t appeal, you could chill – literally – in the sub-zero Ice Bar where the furniture and glasses are formed from ice. 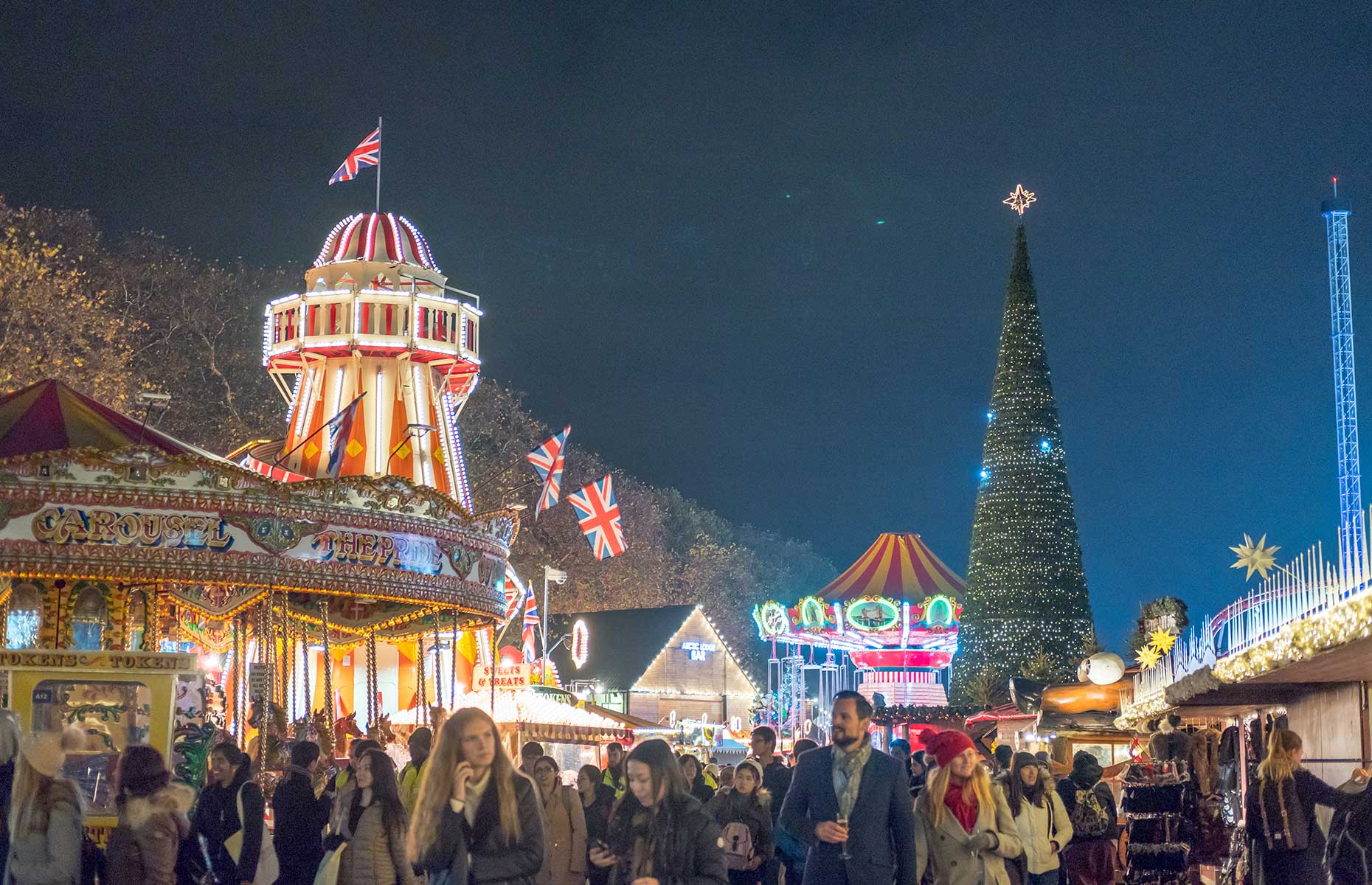 Riding the Giant Observation Wheel, costing £8 for adults and £6 for children, brings views of Hyde Park and surrounding districts of London. That’s also true from the roller coasters and fairground rides. Sights include the biggest outdoor ice rink in the country, by the park’s Victorian bandstand. Skating costs £14.50 for adults and £9.50 for children.

What else to see: If sampling global street food sounds more your thing, browse the stalls at the Southbank Centre’s Winter Market. Craft beers and a retro-style circus also feature beside the Thames near the Royal Festival Hall.

The main event: Set within the medieval city’s walls, York Christmas Festival is surely one of the most atmospheric Yuletide events in the country. The city’s Christmas tree stands on St Helen’s Square, the location of the long-established Bettys Café Tea Rooms.

Browse items crafted in God’s Own County on stalls at the Made in Yorkshire Yuletide Village, part of the St Nicholas Fair. It includes a fun fair at Kings Square, where you can grab a mat and spiral down the traditional helter skelter. Hot chestnuts and mulled wine will be served in the rustic setting of the Yorkshire Barn on St Sampson’s Square.

What else to see: If the chalet-style stalls on Parliament Street don’t yield presents you can always pop into the jewellery and antiques stores within the timber-framed buildings on the Shambles. Santa’s grotto is located at Coppergate which puts you conveniently close to the Jorvik Viking Centre, where entry costs adults £11 and children £8.

When: 16 November until 5 January

The main event: Edinburgh’s Christmas stalls, rides and festivities run at locations around the city, including East Princes Street Gardens and George Street. St Andrews Square hosts an elliptical ice rink with a cider lodge. Skating costs from £5, depending on the time of day. 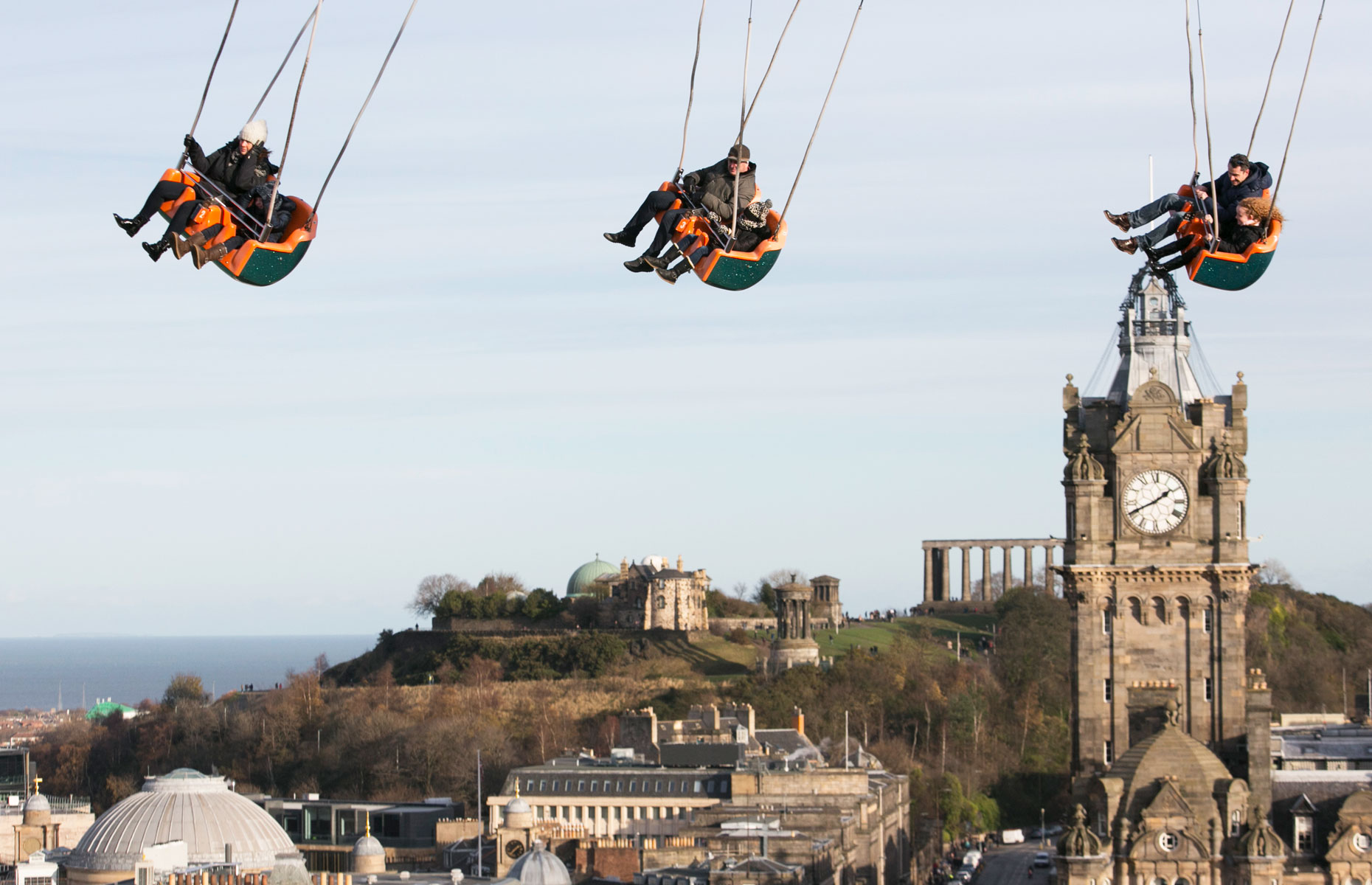 Over the 24 days before Christmas, doors of notable buildings across the city will be acting as a giant advent calendar. The countdown begins at Dovecot Studios, a contemporary art and design centre in the Victorian building that held Edinburgh’s first public baths.

What else to see: The Festival Square Spiegeltent provides a Big Top-like setting for a series of evening performances, including La Clique Noël – Part Deux, a show encompassing fire eating and live music.

Kindness was the theme for this year’s Winter Windows project, where young artists from Edinburgh’s schools were invited to create a stained glass window. These are now displayed along a route running between Great Michael Rise, in the Newhaven district, and St Giles Cathedral at West Parliament Square.