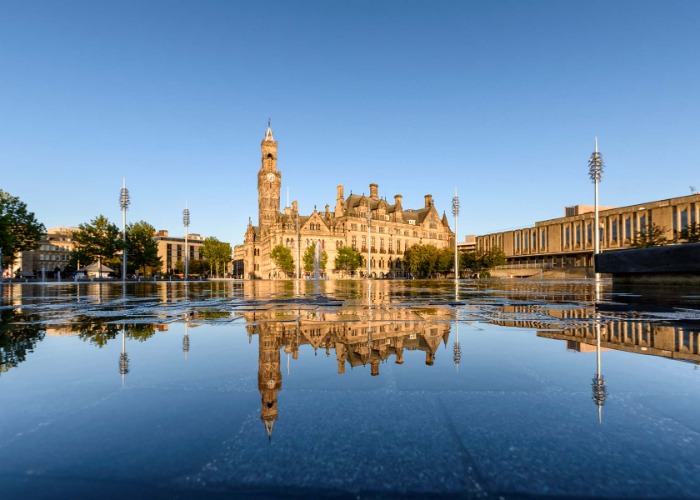 You might be more familiar with Bradford as the backdrop of multiple TV series, like Gentleman Jack, Emmerdale and The English Game – after all it became UNESCO’s first City of Film in 2009, a distinction since bestowed on 17 other places around the world, including Mumbai, Rome and Sydney.

Now the city is gearing up to host all manner of cultural events as the UK City of Culture 2025. Here's how to enjoy a culture-filled weekend break in Bradford.

Check-in at: The Great Victoria Hotel. A 10-minute walk from Bradford Forster Square Station and diagonally opposite Bradford Interchange, this city centre hotel occupies a grand building dating from 1867. Constructed from honey-coloured stone, the property served as a railway hotel in bygone times.

The double rooms are spacious, comfortably furnished and have bathrooms with bathtubs perfect for unwinding in after a day of sightseeing. 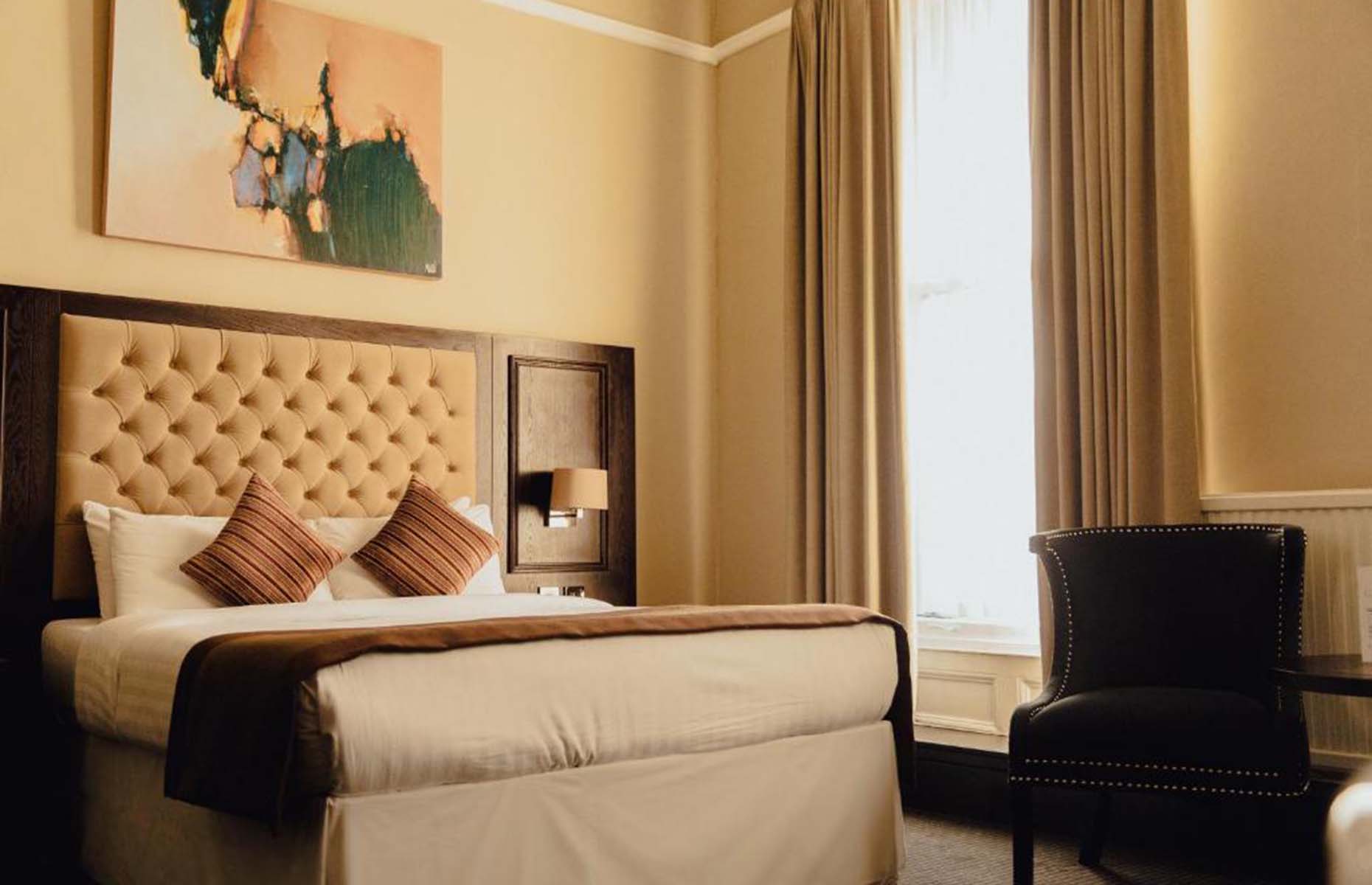 Have a drink: City Vaults is a gastropub whose name alludes to the premises’ previous life as a bank. Given that heritage, it’s worth pointing out that the name of the street that the pub is on, Hustlergate, has nothing to do with shady dealings; it was named after a local businessman, John Hustler.

The pub serves a broad selection of spirits, wines and draught beers. Should you feel like getting comfortable and staying to dine, the menu options include giant Yorkshire puddings with a choice of fillings. The county’s famous savoury pudding is also used to make Yorkshire burritos – a piquant twist on their traditional serve.

Take in a show: The Alhambra Theatre’s programme includes musicals, plays performed by the Royal Shakespeare Company and Northern Ballet shows. More than 1,400 spectators can attend performances in a venue that has been entertaining people since 1914. The domes of the theatre’s exterior help make this a striking landmark.

Enjoy supper: The Kashmir Restaurant remains open until midnight and is one of the city's oldest curry restaurants – a nod to its role as home to a significant South Asian community. Ideal for informal dining, this long-established venue serves a long list of curries and tandoori dishes over two levels.

READ MORE: How to spend a weekend in Leeds

Get your bearings: with a walk through the city. Keep glancing up to appreciate the details of ornate buildings constructed during the Victorian era, when industrial output, principally of woollen fabrics, helped bring unprecedented wealth to Bradford.

Arrive at Centenary Square early in the day to see artificial mist drifting in the City Park before the crowds descend. Start your walking tour at the nation’s largest urban water feature: a vast mirror pool with intermittent jets of water, which fills during the course of the day and reflects Bradford’s ostentatious Neo-Gothic city hall. It’s worth returning as night falls to view the light show that’s at its most enchanting during the blue hour. 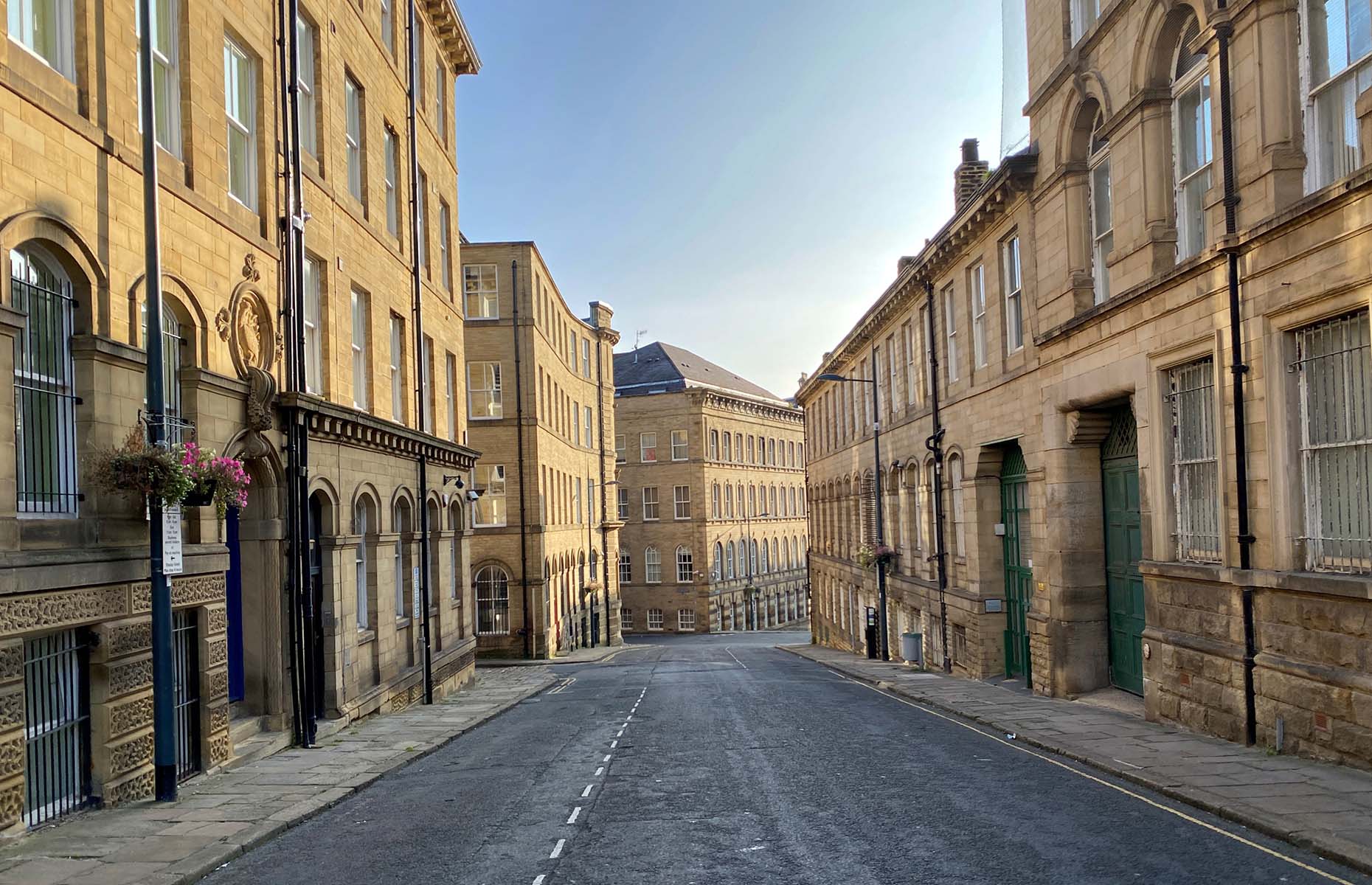 Continue on to Little Germany, a quarter named after the Central European merchants who established trading premises here in the mid-19th century. Here you’ll see sandstone warehouses with designs influenced by the exteriors of Italian Renaissance palaces. Don’t miss a sculpture of a grandfather clock and an armchair created by sculptor Timothy Shutter in the early 1990s on the sloping pavement of Chapel Street.

Head along Peckover Street to view Bradford Cathedral, whose core dates from the 15th century. If you appreciate arts and craft movement designs, pop in to see the textiles and stained glass, featuring works by the likes of William Morris, Dante Gabriel Rossetti and Edward Burne-Jones.

Continue uphill for about a mile (1.6km) to reach the sprawling Undercliffe Cemetery. Headstones, obelisks and monuments here date from the mid-1850s onwards and have provided a backdrop to scenes in the popular Peaky Blinders TV series. Intermittently, events exploring aspects of Bradford’s history are held in the cemetery. 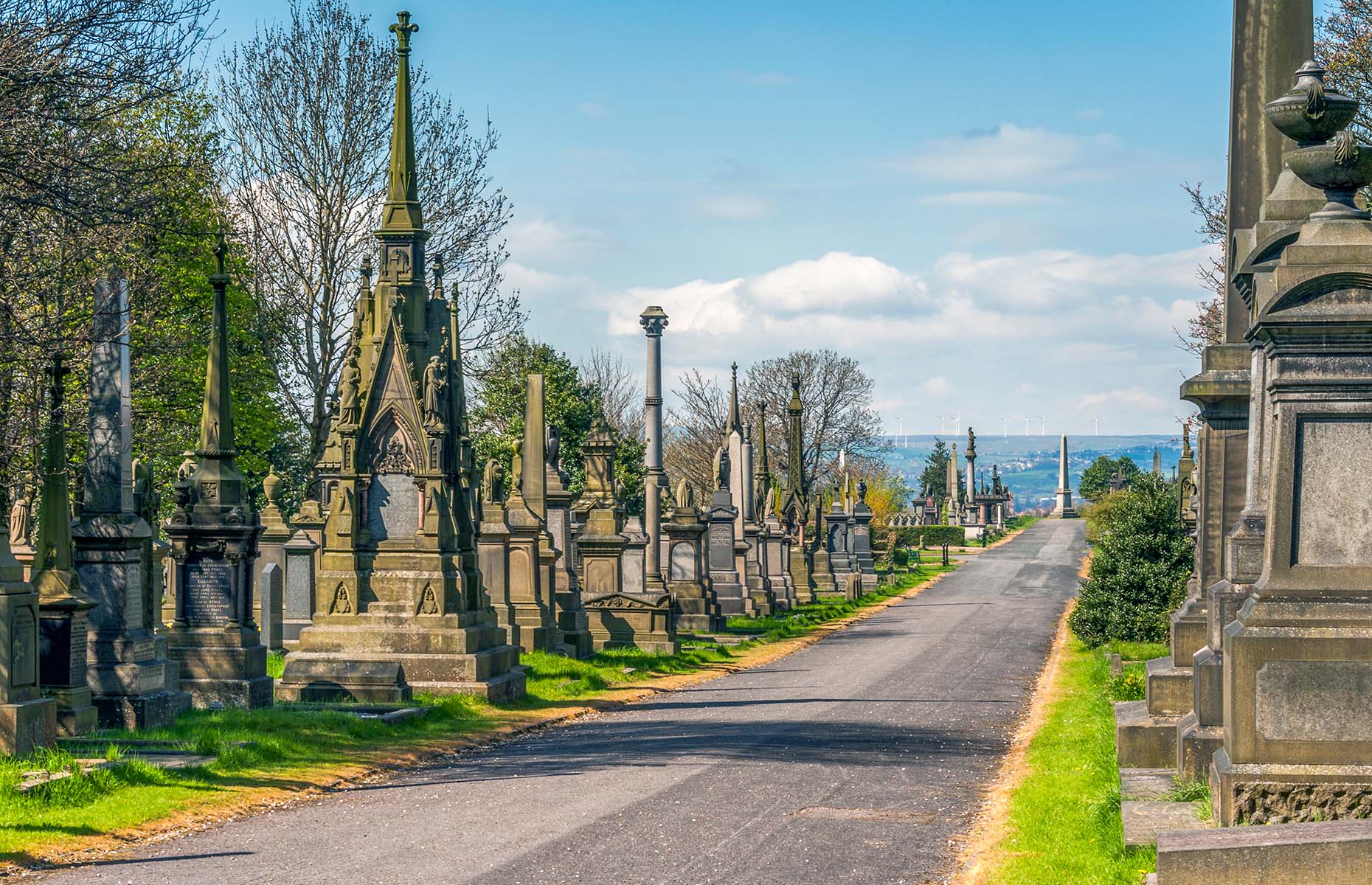 Go underground: Sunbridgewells is a subterranean shopping and leisure complex with units accessible by a vaulted brickwork corridor. For a short period in the mid-1960s the premises hosted The Little Black Fat Pussy Cat Club, an independent music venue that once saw The Beatles perform after a gig in the city. It now holds atmospheric bars and on Fridays and Saturdays, from 10am to 6pm, independent vendors sell their wares.

Grab a light lunch: The menu at Smörgasbord Coffee Bar includes sandwiches but sightseeing by foot burns off calories so it'd be a shame not to try the lamb shish, served smothered in a spicy sauce, the house speciality.

Visit a museum: Bradford is home to the UK’s only National Science and Media Museum which in turn is the location of the independent Pictureville Cinema. Before viewing a film on the IMAX screen head down to the Kodak Gallery, which tells the story of photography’s evolution. The free-to-visit museum’s collection encompasses three million items and exhibits include the camera used by Louis Le Prince to capture the world’s first moving images.

A post shared by Science and Media Museum (@mediamuseum)

Go for dinner: Tuck into Kashmiri food at the Sweet Centre on Lumb Lane. Succulent bhuna dishes and a range of baltis are served. As the restaurant’s name suggests, it’s worth coming here if you have a sweet tooth to try traditional South Asian sweets, including halwa and gulab jamun.

Visit a World Heritage Site: Saltaire, on the northern fringe of Bradford, was added to UNESCO’s list of culturally significant locations in 2001. The model village was established by Victorian industrialist and philanthropist Titus Salt to offer housing, a hospital, plus educational and leisure facilities to the workers of his mill. It later influenced similar developments elsewhere in the world.

Salts Mill is now a multi-use facility with shops, an area dedicated to telling the story of Saltaire plus the 1853 Gallery displaying artworks by David Hockney.

Enjoy Sunday lunch with a view of Hockney’s hand-painted mural at the mill’s Cafe in to the Opera restaurant. Dishes such as croque monsieur, plus fish and chips are served in the laid-back dining space.

Afterwards, cross the Leeds and Liverpool Canal and River Aire into Roberts Park, which houses the world’s only cricket ground within a UNESCO World Heritage Site. 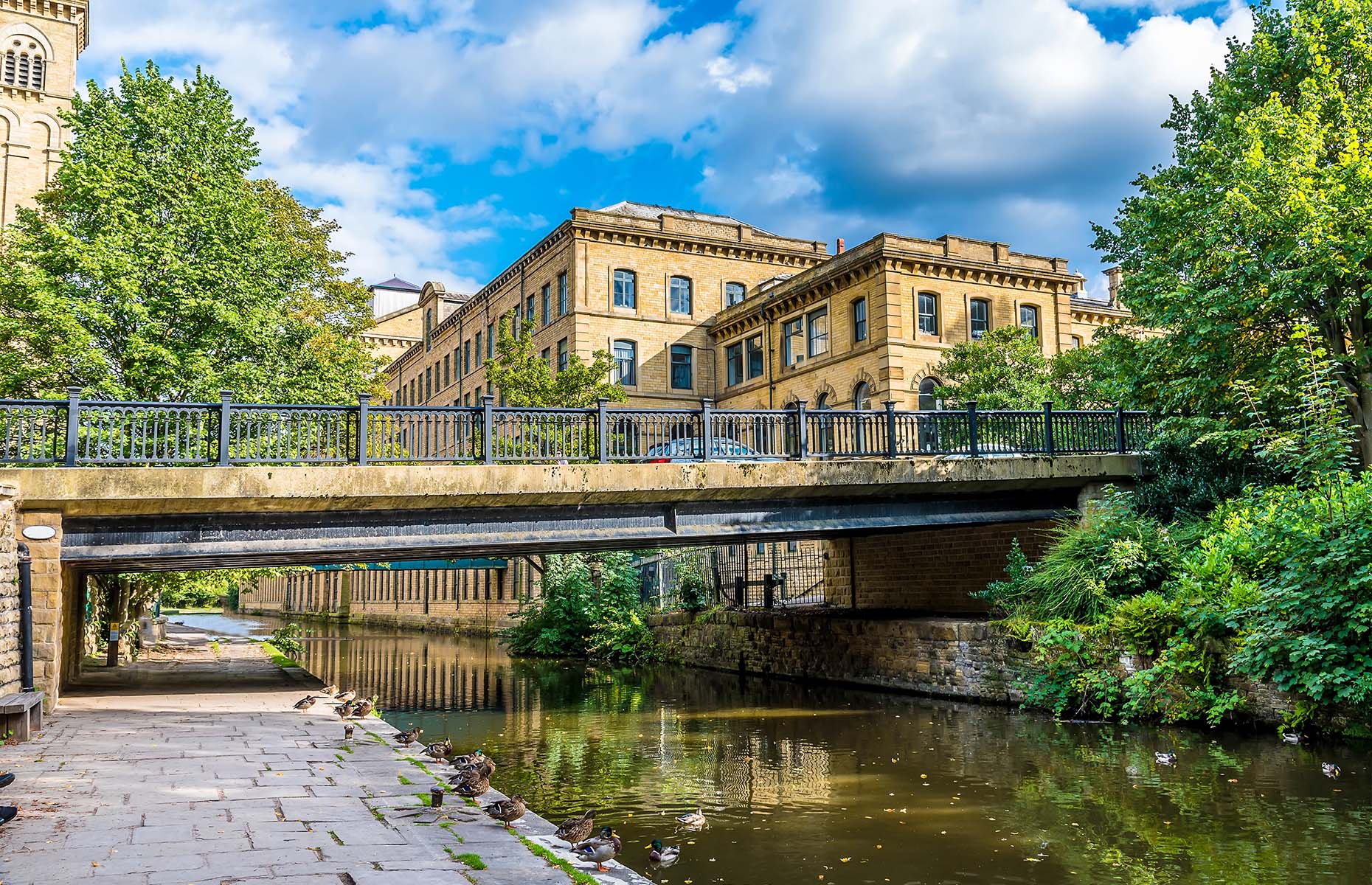 Sink a beer: The Saltaire Brewery taproom remains open until 6pm on Sundays. Choose one of the 11 draught beers and, in fine weather, head into the beer garden.

View more art: On the way back into the city centre take a detour to Lister Park, which has a modern interpretation of a Mughal-style Charbagh garden. It’s also the site of Cartwright Hall Art Gallery which remains open until 4pm on Sundays and displays artworks by the likes of Paula Rego, L.S. Lowry and Damien Hirst.

For more information about things to see and do in Bradford, take a look at Visit Bradford.