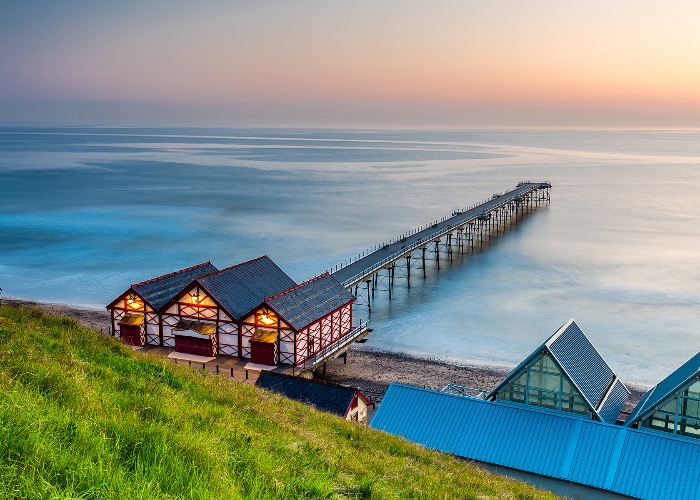 With epic surf, sands and sunsets, the cinematic splendour of Saltburn-by-the-Sea makes it north-east England’s best-kept secret, while its nostalgia-inducing Victorian design – such as the cliff lift and pier – is as charming now as it was in its heyday.

Once an isolated fishing hamlet at the centre of north Yorkshire’s smuggling trade, Saltburn-by-the-Sea blossomed into a resort in the 1860s, as Victorian entrepreneurs built their ‘new Saltburn’ atop the cliffs and named its streets after precious gems.

In contrast to many of Britain’s seaside towns, Saltburn, located around 10 miles (16km) east of Middlesborough, doesn’t feel like it’s had its day. The old and the new blends without friction, with carpeted hotel bars and generations-old boozers equally as beloved as new artisan delis and micropubs. Tom Hardy – married to Stockton actress Charlotte Riley – seems enamoured, popping up everywhere from the pubs to the mini golf course.

The region’s industry is only faintly visible on the horizon, with Saltburn itself set beside unspoilt nature, including ancient woodland and clifftops. Then there’s the beach: often missed by sand seekers, the huge swathe of pale powder is backed by cliffs and lapped by some of the best surfing waters in the North.

Here are six reasons to visit. 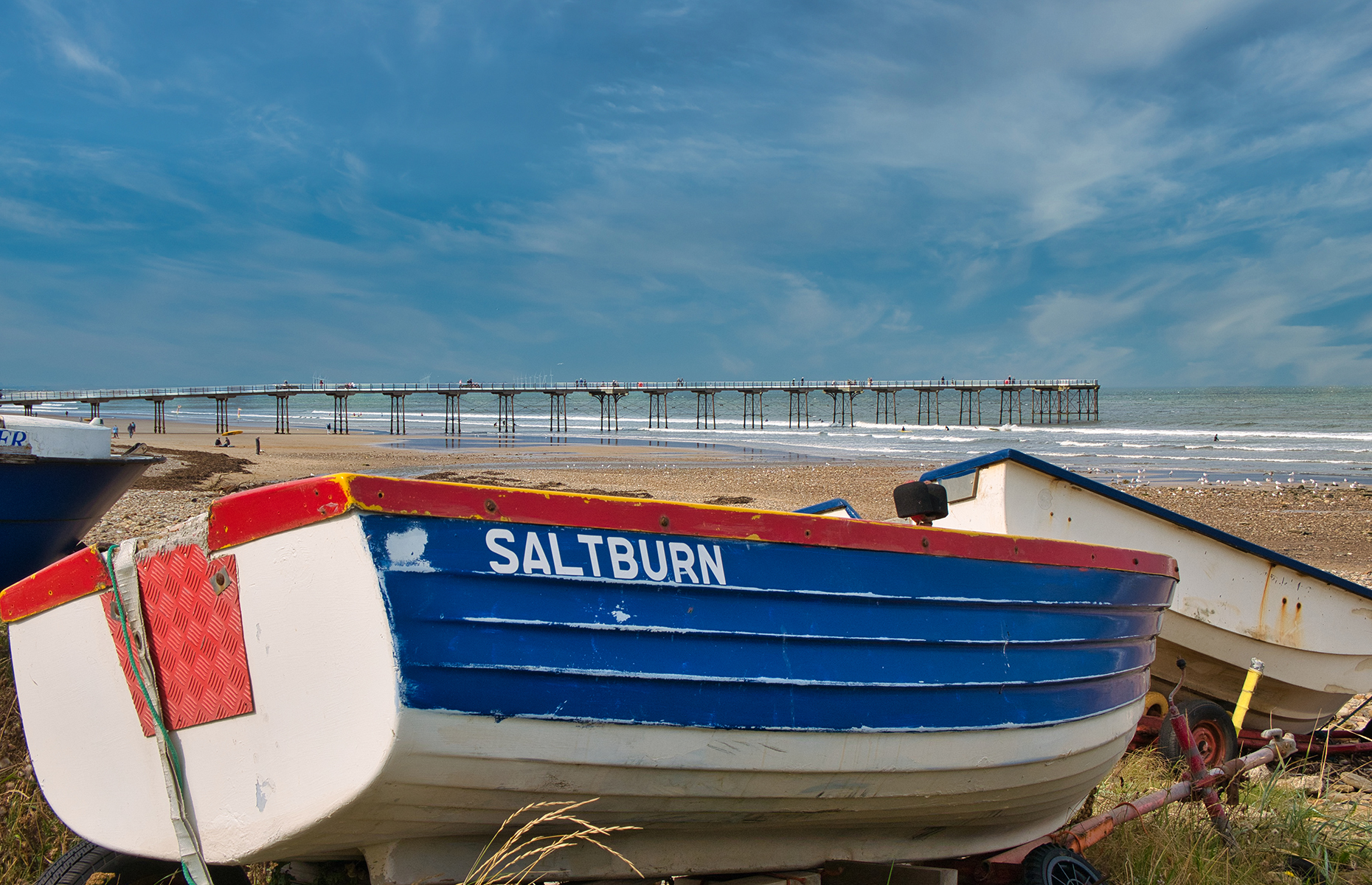 1. The food goes beyond fish and chips

The Seaview Restaurant’s menu is the delicious result of owner Glenn Pearson’s connections with small-scale fishermen and his focus on quality North Sea produce. Don't miss the Saltburn crab brioche, with its white and brown crab mixture and lemony crayfish-tail dressing.

If it’s the sea views that reel you in, head for dinner at Tomahawk Steakhouse, which opened in June 2022 and specialises in steaks from Warrington wagyu – a British supplier of wagyu-dairy crossbreeds. The sheltered terrace overlooks the estuary and cliffs to the south of Saltburn beach.

For a casual bite, Signals lets you take away food in a little brown box to be eaten at the beach – its panko chicken sweet chili bao buns fly out on sunny days. Also a favourite, Real Meals transports you to a Mediterranean-inspired deli, with artisan groceries for sale among the dine-in tables. From the cold counter, Scotch eggs by Teesside producer The Clucking Pig are courtesy of rescued hens and said to be eaten by the queen.

2. You can make like the Victorians and ride the cliff lift

A pair of maroon- and white-painted wooden carriages slide up and down parallel 207-foot (63m) long tracks, linking the pier with the Victorian part of town. Originally a rickety vertical hoist, the structure was used for industry, but plucky Victorian leisure-seekers would queue up to take the ride.

As the ropes rotted, the contraption was replaced with this romantic-looking water-powered tramway, which opened in 1884 with such solid engineering it’s almost identical to what you see today. The latest restoration project took two years, opening to the public again in time for summer 2022.

Carrying 12 people in each car, the railway takes just under a minute to transport folks up 120 feet (37m) and costs £1.50 ($1.75) per ride. As you descend, the most northerly surviving pleasure pier along this coast leads the eye out to sea. 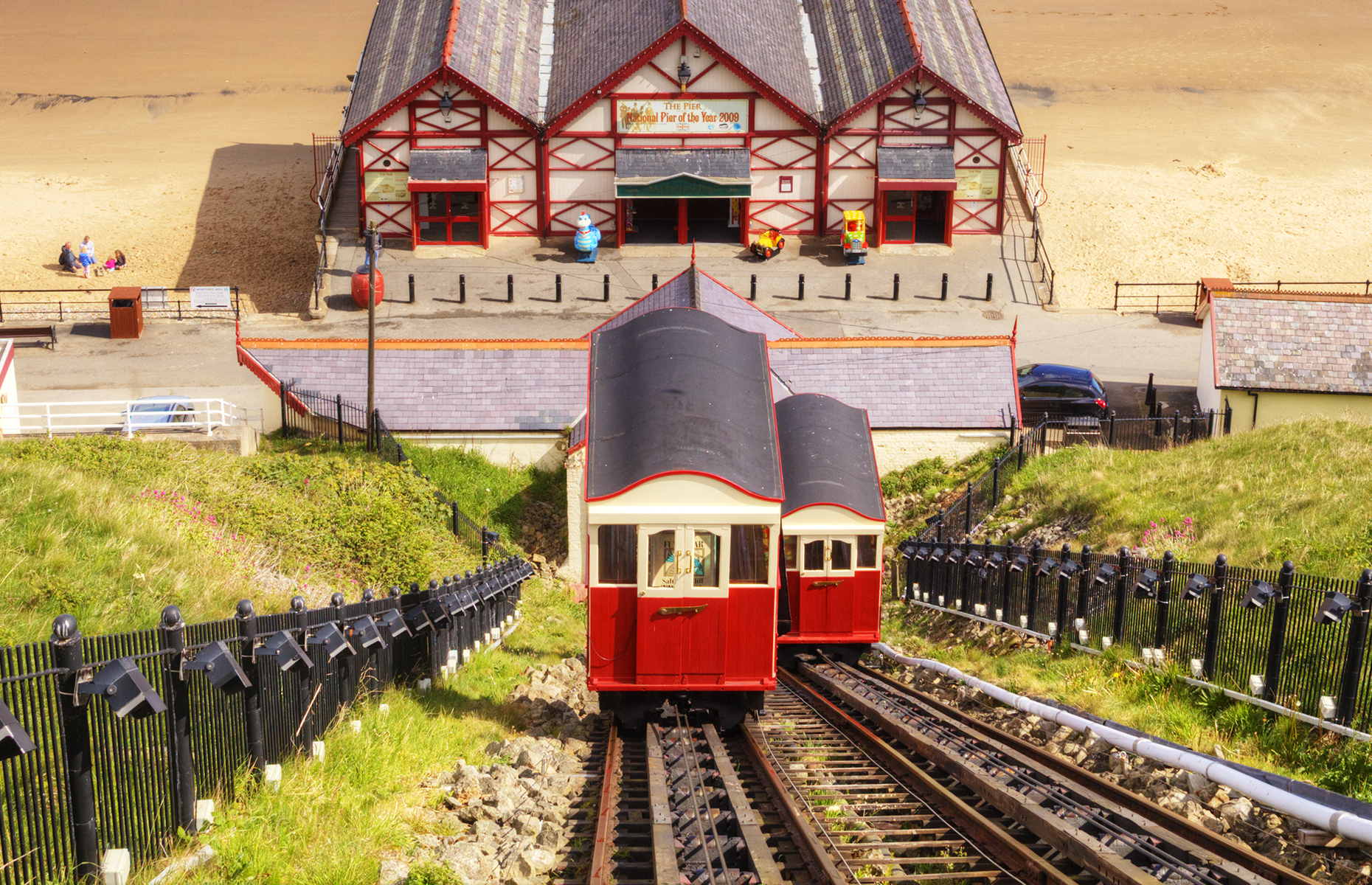 3. The drinking holes come with backstories

Thanks to its Quaker town planners, Saltburn’s Victorian centre was once a model of sobriety, with alcohol only permitted in hotel bars and members’ clubs. The Victoria was the first pub in town when it was converted from shop units in 1982. As if conjuring an imaginary past, its interior is a reinvention of a Victorian pub, with wrought-iron tables and wood-panelled walls.

The former Alexandra Hotel was one of the only establishments entrusted to serve alcohol during that sober century. And though the hotel has long closed, its bar is flourishing as an eccentric community boozer, now known as the Back Alex (from the pub’s official name the Alexandra Vaults and its location on Back Amber Street). Three interconnected rooms include an entrance lounge that looks delightfully lived-in, down to the framed pictures and ornaments.

Meanwhile, one pub that dwells beneath the windswept headland of Old Saltburn harbours a shady past. Between 1700 and 1850, Saltburn was the hub of the north Yorkshire coast’s roaring smuggling trade, with ‘King of the Smugglers’ John Andrew running his illicit trade out of the Ship Inn. With those tempestuous days long gone, there’s now no more cosy feeling than sinking a Black Sheep Best Bitter beside the fire. 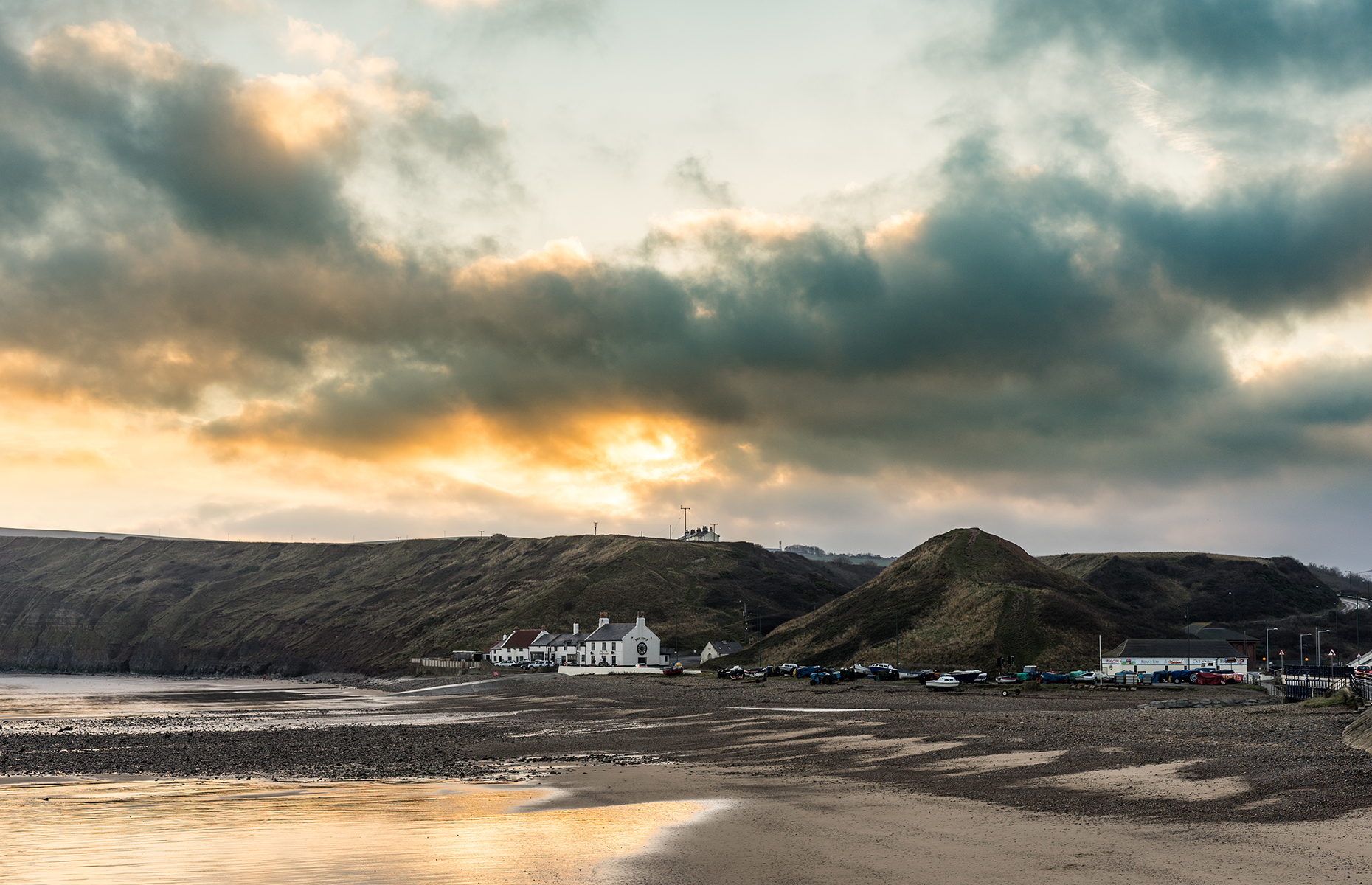 4. It has one of the UK’s best beaches

The wooden rainbow of huts at the eastern end of the promenade look like they’ve been there since Queen Vic’s reign. Each one comes with a kettle, tea and milk, for the ultimate English seaside experience whatever the weather.

There’s a lifeguard on duty during the summer and, good news if you’re more of a paddler than a swimmer, sandbars mean you can wade far offshore and still be up to your knees. 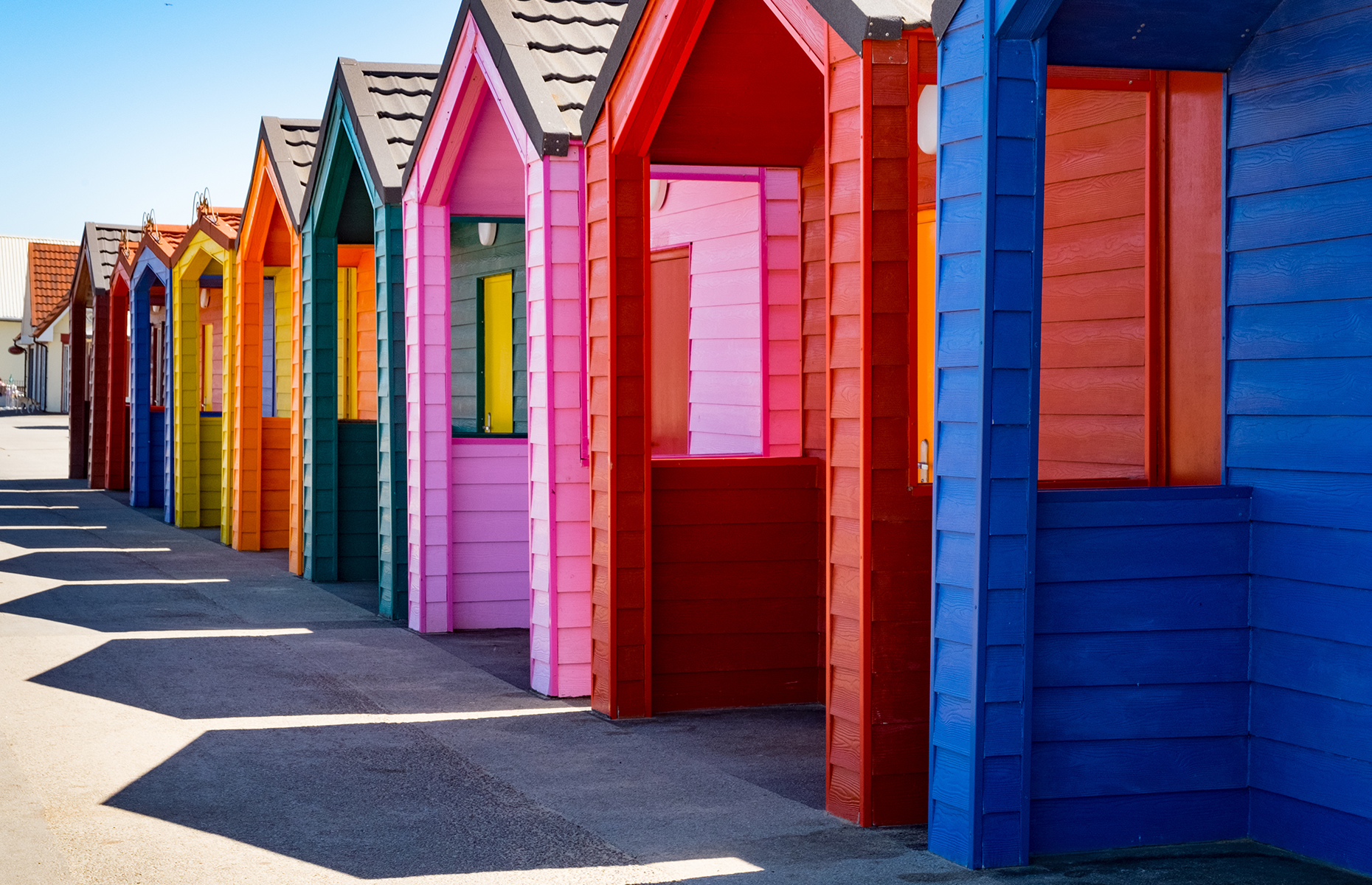 5. It’s the surf capital of the North

Surfing conditions at Saltburn offer the best and most varied waves off the North Sea coast.

John Smith was the first person to surf at Saltburn in 1965 and now there's a booming surf scene, with regular world-class competitions.

Having read a Sunday newspaper article on the sport, Smith took one look at the pumping surf on his doorstep and his mission was born. With board availability in the UK limited to Cornwall at the time – and at a price he couldn't afford – he set out to make his own. The ICI plant at nearby Redcar provided just what he needed: a slice of A-grade polyurethane foam. After taking to the waves, he was quickly joined by John Roughton and Ian Davies, and the local lads became known as the 'big three'.

The wave-riding community here has grown with each generation – it's a welcoming spot, with outsiders ripping those left and rights as freely as the passionate locals. Saltburn Surf School runs lessons for everyone from beginners to advanced surfers during the warmer months. A two-hour lesson includes 20–30 minutes of instruction on the beach before you take to those glorious waves.

If you’ve got a car and want to hunt out your own crests, Flow Surf School offers local delivery of its hire equipment. And for two days during September, its sister surf shop Drift runs an alternative surf competition where riders take to any kind of surf craft they want.

READ MORE: The most incredible historic images of surfing in the USA 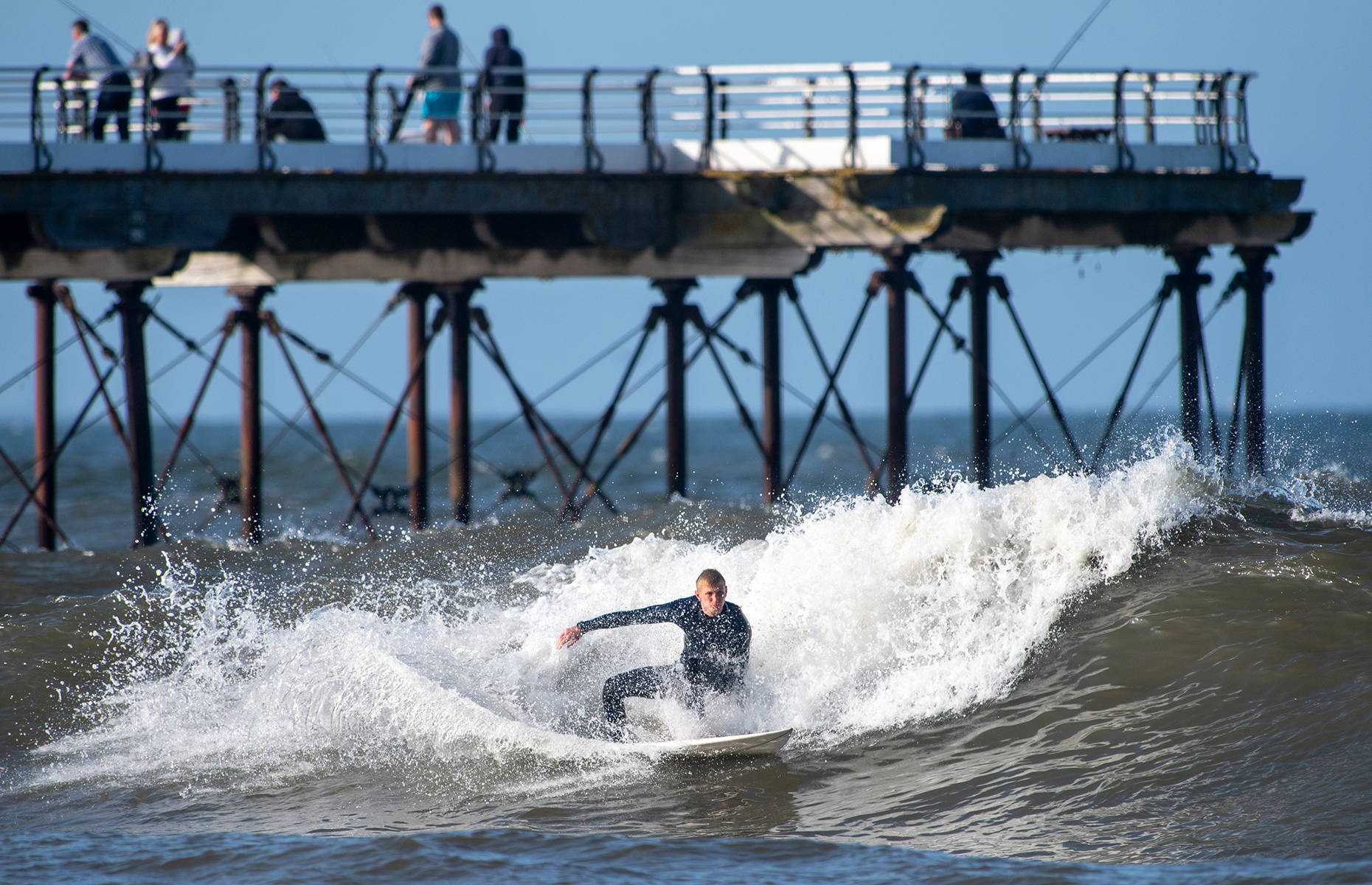 6. It’s easy to go car-free and explore the nature around town

You can ditch the car in Saltburn, thanks to its train station and the footpaths leading off into the surrounding nature. Walk along a path behind the Ship Inn and up to the headland  and you’ll find yourself on a coastal section of the Cleveland Way National Trail.

After eight miles (13km) you’ll arrive at the Yorkshire village of Staithes (pictured), a jumble of fishermen’s houses above the harbour wall (dodge the sea spray to duck in for lunch at the Cod & Lobster pub). The bus will deliver weary legs back to Saltburn in just under 40 minutes.

For less of an expedition, Saltburn Gill offers various trails that loop through the woods. Sheltered from the clifftop winds beneath the dense canopy of oak and ash trees, the 52-acre nature reserve is a sanctuary of ancient semi-natural woodland that’s more than 420 years old. 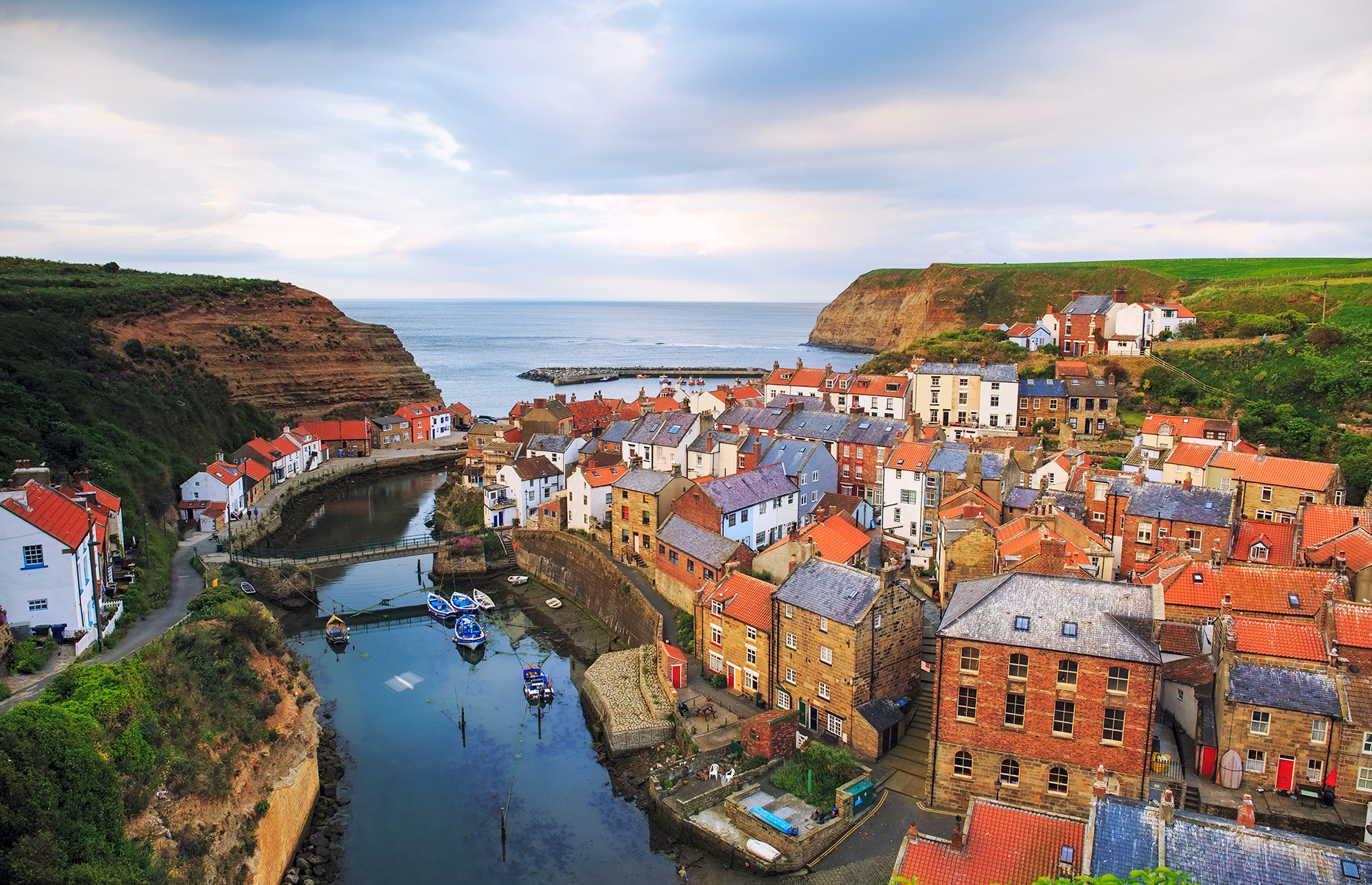