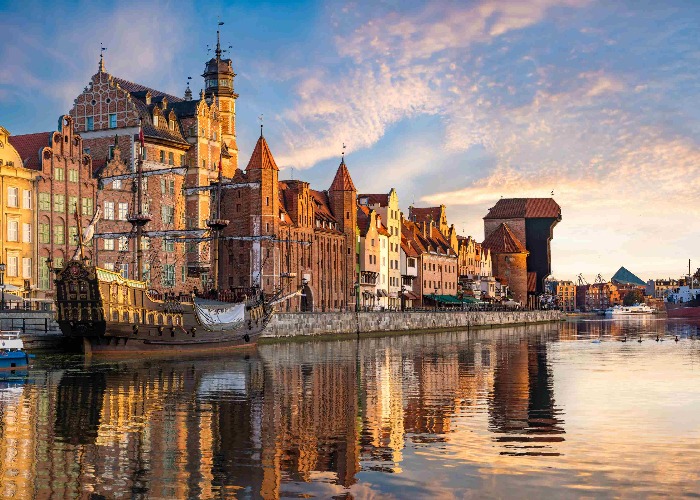 A buzzing city on Poland’s wonderfully rugged Baltic coast, Gdansk is easily accessible, offers fantastic value for money and is jam-packed with brilliant museums. What’s not to love?

Stroll along the banks of the Motława river, which slices through the centre of Gdańsk, and you’d be forgiven for thinking you were in Amsterdam. Half-timbered townhouses line the riverbank, vying for space with landmark buildings like the medieval crane. Made entirely of wood, this symbol of Gdańsk dates back to the 1300s and was once used to load cargo onto passing riverboats.

Gdańsk’s resemblance to Amsterdam is hardly surprising. Both were Hanseatic cities and the strong trade connections between them, and with other hubs like Bruges in Belgium, are reflected in this Polish city’s architecture. There’s St. Mary’s Church, which resembles the Bruges church of the same name, or the High Gate (Brama Wyżynna), which was the main entrance to the city when it was built in the 1500s by Willem van den Blocke, an architect who’d travelled to Gdańsk from the Netherlands. 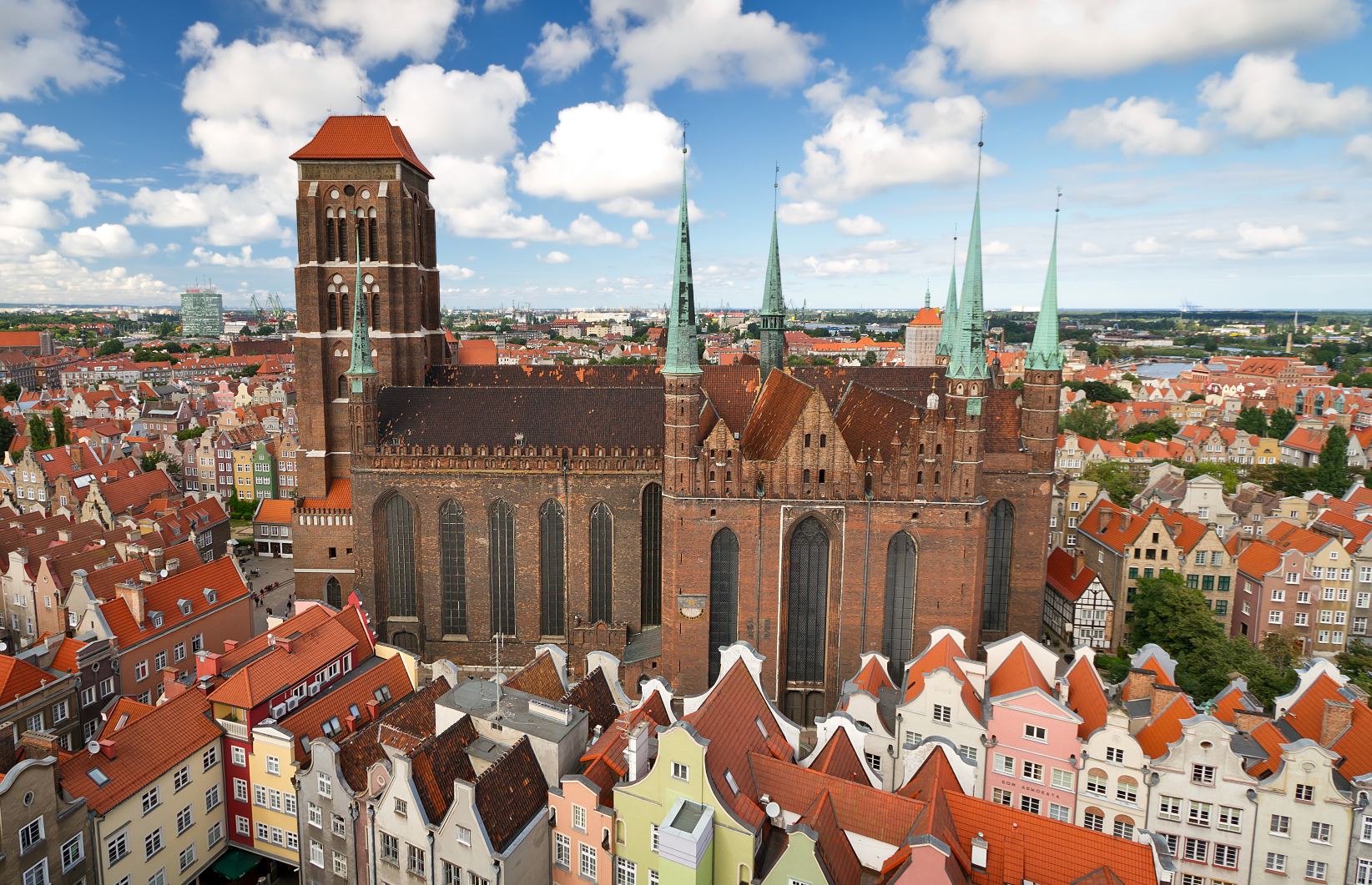 Venture away from the historic centre, however, and you’ll find reminders of Gdańsk’s more recent history, including the former shipyard, now transformed into the city’s hippest nightspot. Head here to gulp pints of chilled Kozel beer (purchased from a shipping container repurposed as a bar) while you sprawl on an urban beach in the shadow of a sculpture-like tangle of cranes.

Top tip: pick up a Gdańsk Tourist Card – there are different varieties for families, active travellers and culture fans. You’ll get free admission to dozens of attractions, discounts at many more and 20% off at partner restaurants.

Check-in at: the Radisson Blu Gdańsk, a modern, 5-star hotel in the heart of the old town (from £75 for a double room.) Opt for a fifth floor suite if possible – sloping ceilings ramp up the cosiness and you’ll enjoy fantastic views of the city’s historic skyline.

Get your bearings with: a stroll along the city centre section of the Motława river. This is where you’ll find the city’s medieval crane and some of its oldest townhouses. When you need a breather, grab a spot on the grassy bank next to the Museum of the Second World War. Once every hour, the hi-tech footbridge next to the museum pivots, rising to let boats pass beneath. Bonus points if you spot the city’s replica pirate ship sail past.

Grab lunch at: Restauracja Filharmonia, inside Gdańsk’s riverside, red-brick concert hall. It’s fine dining, albeit with Polish prices. We recommend the goose leg served with cherry sauce and dried apricots, which will set you back £11, or the seven-course tasting menu with wine, priced at £59 per person. 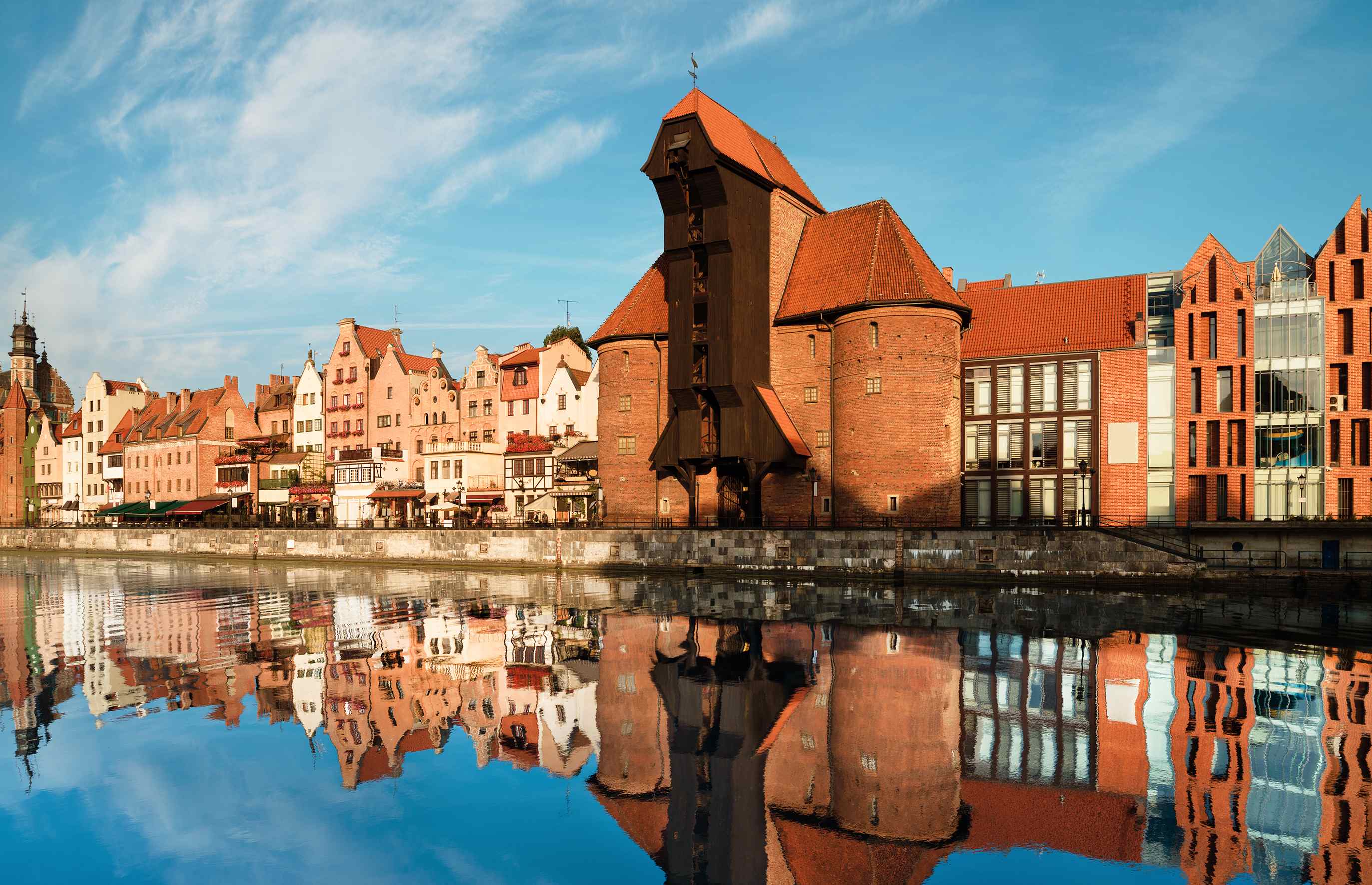 Get a history fix: on Długi Targ (the Long Market), a wide, pedestrianised boulevard which leads from the river to the Golden Gate – a Renaissance-style city gate designed by Abraham van den Blocke in the 1600s. Other notable buildings include the city’s town hall, an explosion of Gothic-Renaissance grandeur with a 269-foot (82m) spire, and the 17th century Neptune Fountain, which is Poland’s oldest secular monument.

The statue, depicting Neptune wielding a trident (a nod to Gdańsk’s seafaring history), was dismantled and hidden away during the Second World War but re-emerged in 1954. 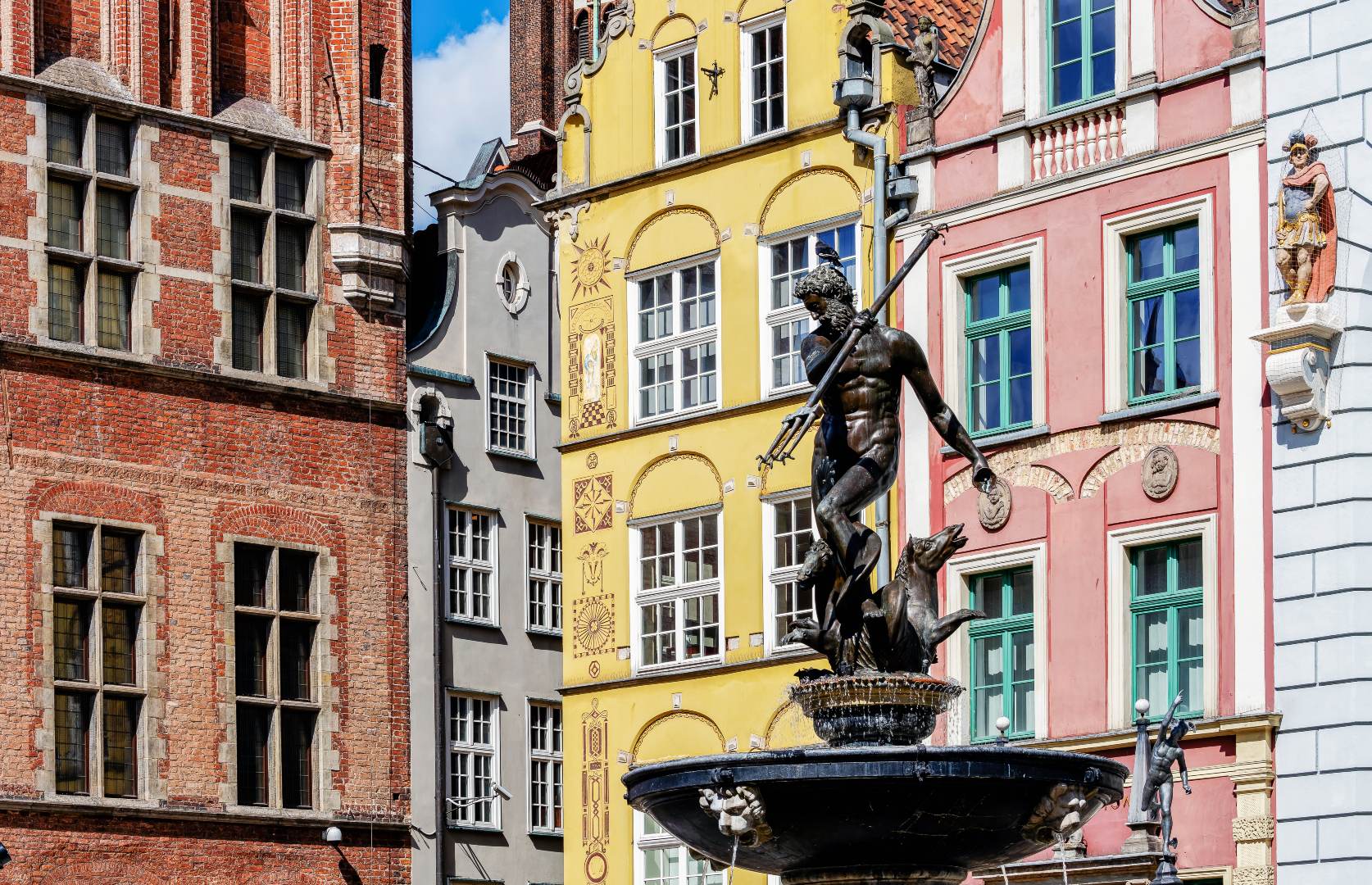 Soak up the silence at: St. Mary’s Church (or Basilica of St. Mary of the Assumption of the Blessed Virgin Mary in Gdańsk, to give it its full name). It’s arguably the world’s largest Gothic brick church and was a true labour of love – construction started in 1343 and finished 159 years later.

READ MORE: The world's most beautiful places of worship

Make sure you check out the astronomical clock, which was the world’s largest when it was installed in 1470. Its dials show the phases and position of the Moon and the Sun in relation to the signs of the zodiac and it’s topped with statues of Adam and Eve, who ring a bell on every hour. Midday is marked by an automated procession featuring the three kings, the apostles and a figure representing death. 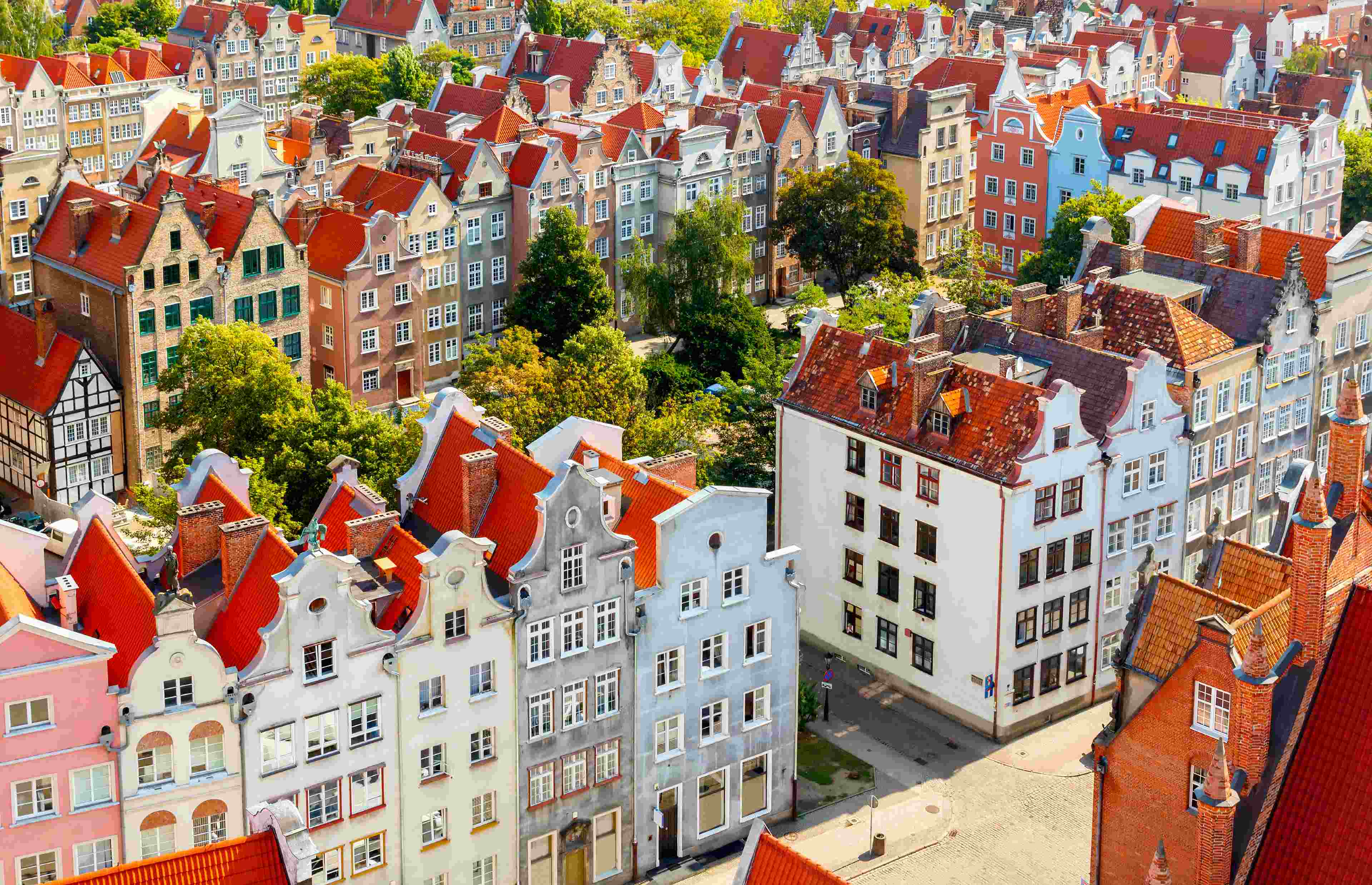 Toast Gdańsk at: Piwnica Rajców. You’ll find this labyrinthine brewery in the basement of the Artus Court, once a meeting place for merchants and now a branch of the Gdańsk History Museum. Piwnica Rajców has some of Poland’s best craft beer (its tanks can hold 34,000 litres at any one time), and ordering your beverage is pretty fun too.

Simply pick up a beer card, load it with some Polish zloty and head to the ‘beer wall’, where you can self-pour a tipple of your choice. It works like a petrol pump – you pay for what you pour – and a pint costs around £2. Soak up the alcohol with a bowl of the brewery’s delicious fish soup, ideally accompanied by a slab of rye bread.

Get a science fix at: the Museum of Amber. The enormous lump of amber in the reception area (the largest in the world) sadly came from Sumatra, Indonesia, but the museum still has an enormous collection of rare amber specimens from the area and plenty of tech to play with.

Don’t miss the display walls filled with chunks of amber, and use the nearby touchscreen to tap in the specimen’s corresponding number and bring up extra information. The most interesting pieces are the ones containing insects, including a perfectly preserved bird-eating spider. 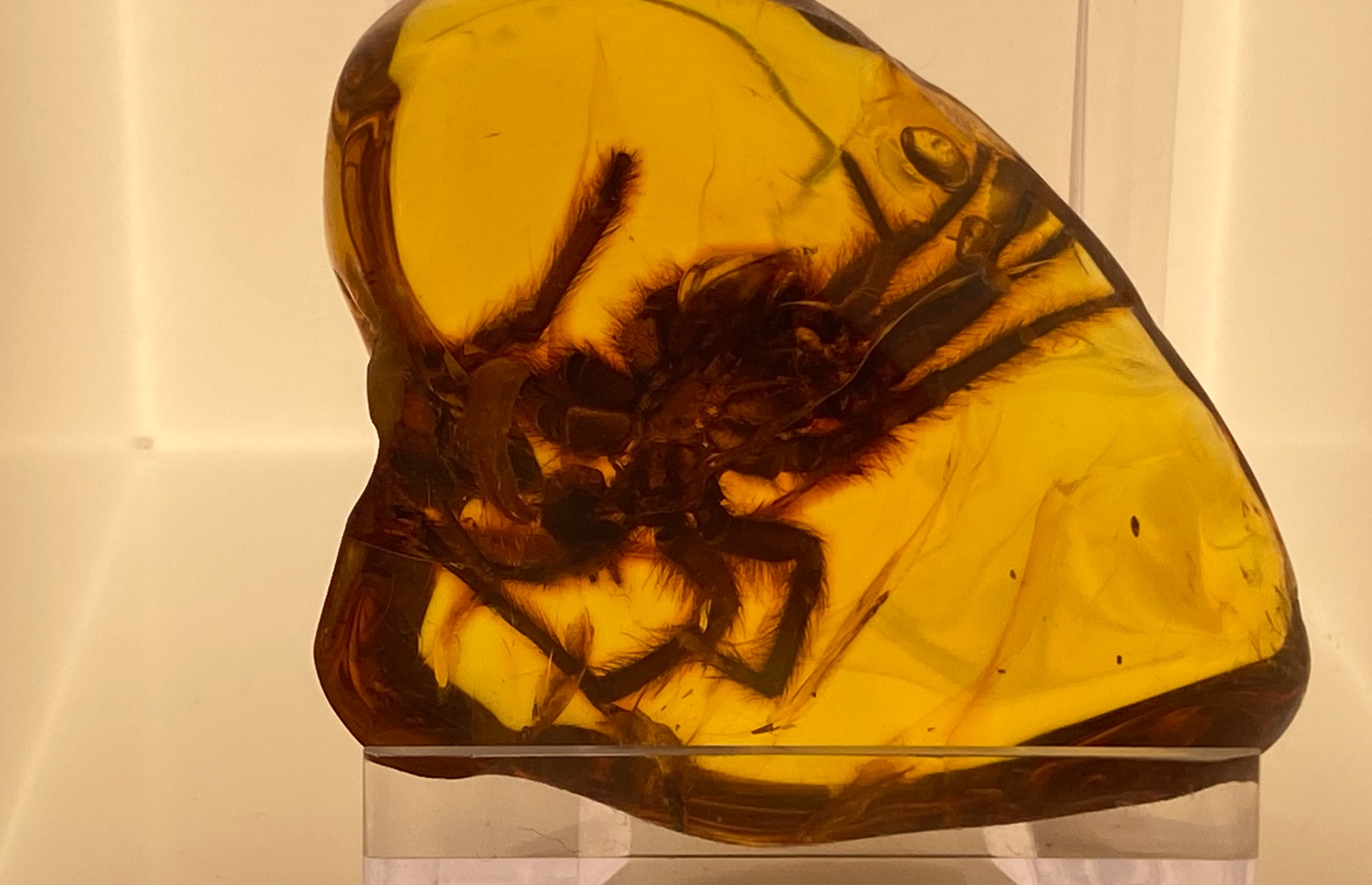 READ MORE: Fascinating new museums to visit around the world

At 53,820 square feet (5,000sqm) the museum is enormous, although most people start with the main exhibition three floors below ground level. Exhibits explore not only the war itself but its causes. Footage (much of it incredibly harrowing) and first-person accounts play a major part, while displays include everything from Sherman tanks to swastika-adorned Christmas baubles. 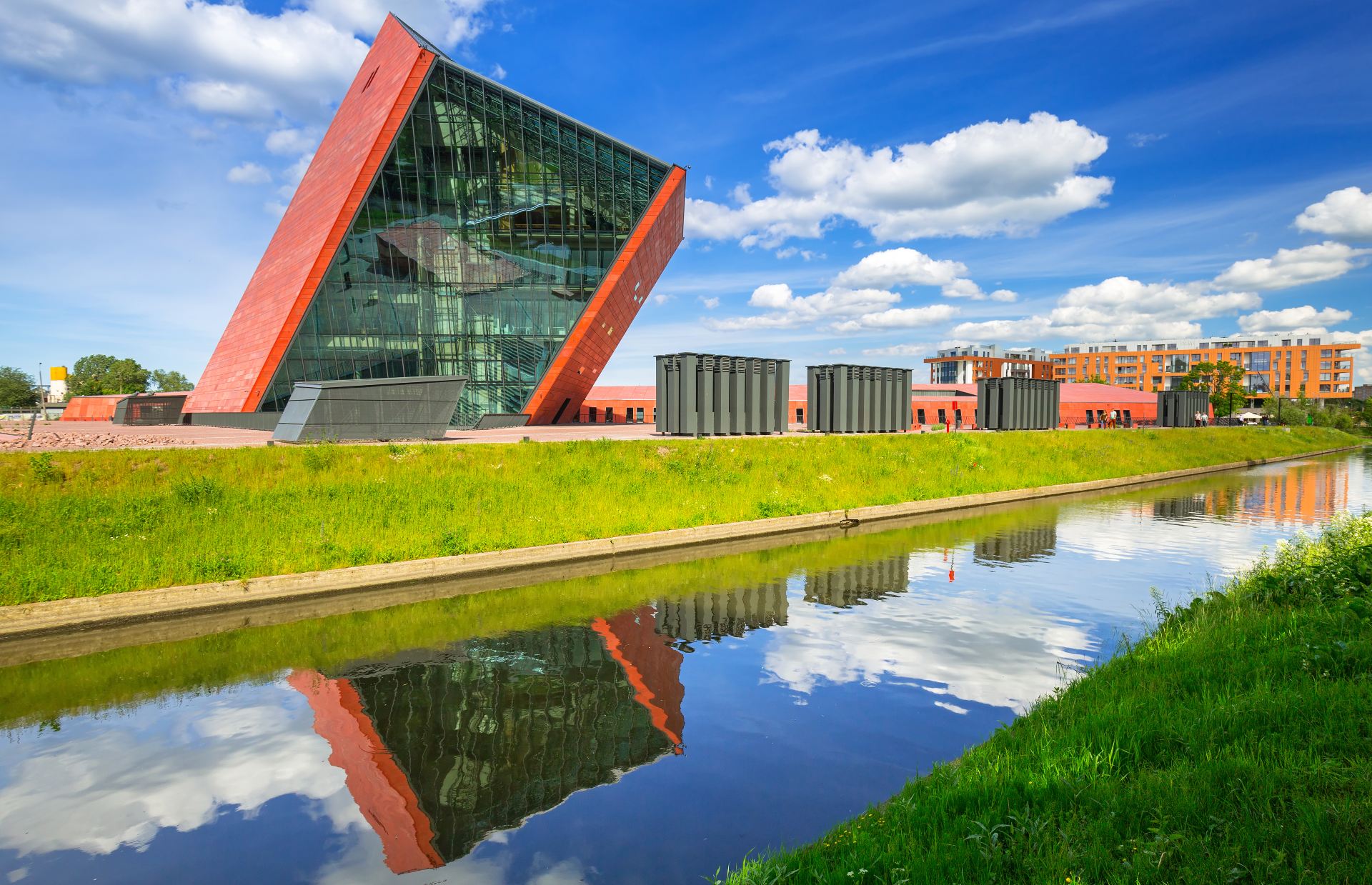 Party at: 100cznia, a Lego-like jungle of shipping containers turned into restaurants, bars and vintage stores. You’ll find food from all over the world here. Nab a deckchair on a patch of sand or, on cooler days, head inside the repurposed warehouses, one of which contains a basketball court daubed with phosphorescent paint.

There are regular events held here too, ranging from film screenings to food festivals. Most of the food outlets are smaller versions of popular Gdańsk restaurants, and one of our favourites is Pizza Corner Gdańsk, where the owners have somehow crammed a shipping container with a wood-fired pizza oven.

Get the lowdown on Gdańsk at: the European Solidarity Centre, which was built to commemorate the fall of communism in Europe (kickstarted right here in Gdańsk); the history of solidarity in Poland; and the ship workers’ uprising, which created the first independent labour union in a Soviet bloc country. This beautiful building was inspired by the shape of a ship, a nod to the Solidarity movement’s shipyard roots.

The museum’s 1,800 exhibits include the (now UNESCO-listed) boards bearing the 21 demands made by striking ship workers in 1980 and the crane operated by legendary trade union activist Anna Walentynowicz.

There is also a gorgeous rooftop garden with stunning views over Gdańsk and beyond, alongside a ship-themed soft play area, library and café. The museum is found on Solidarity Square, which is dominated by the anchor-adorned, 138-foot-high (42m) Monument to the Fallen Shipyard Workers. 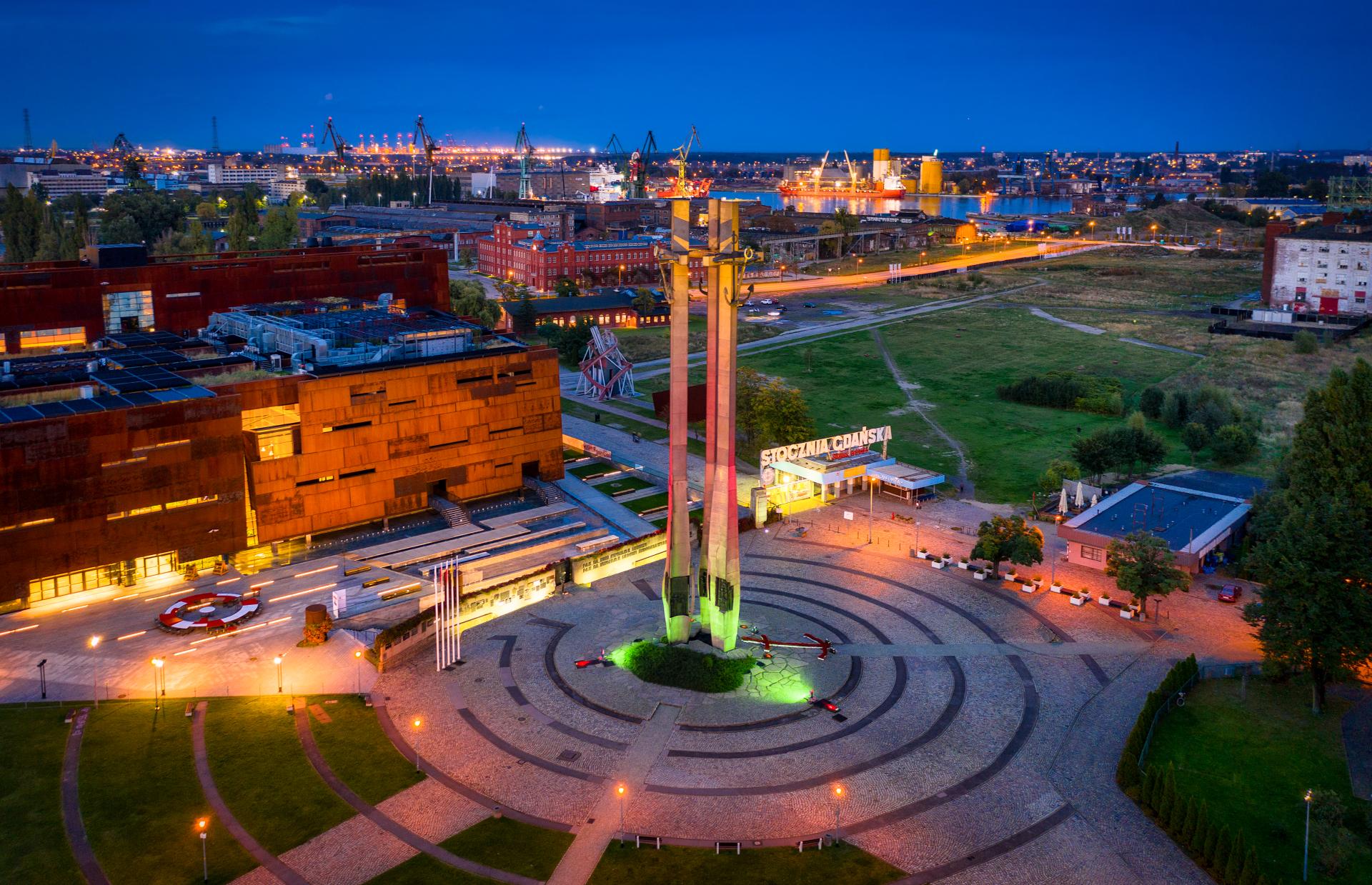 Squeeze in a visit to: Sopot, a 20-minute train ride (or £6 Uber journey) from the city. This sleek beach resort is famous for its long stretch of golden sand and its pier, which was built in 1927 and is the longest wooden pier in Europe. Wander away from the beach to explore Sopot’s leafy streets, many of them lined with elegant, pastel-hued villas.

READ MORE: Love a city break? Check out our guide to Geneva