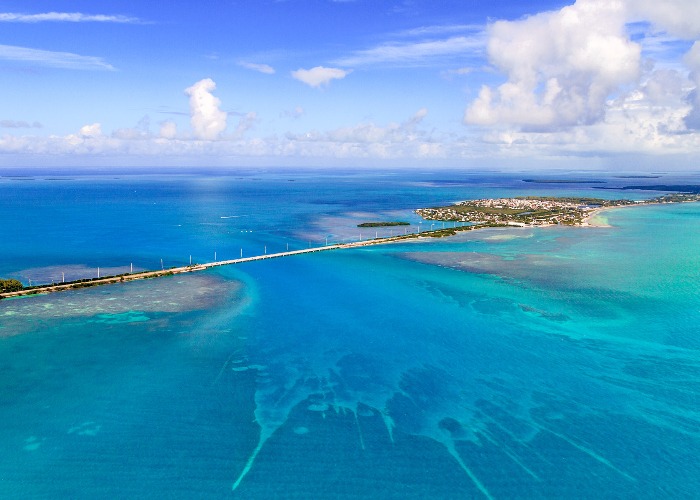 More than just a spectacular spot for sunbathing, snorkelling and scuba diving, the Florida Keys is home to a fragile ecosystem which must be expertly cared for. Jacqui Agate speaks to those who are thankfully protecting this incredible string of islands.

The Keys are Florida’s headline act, its glittering finale. They curl from the state’s southernmost tip – at the meeting point between the Atlantic and the Gulf of Mexico – in an arc so neat it could have been sewn into the ocean by hand.

But the Keys’ ecosystem is as fragile as it is beautiful, with climate change and rising populations placing stress on its habitats.

In a bid to educate and make change, low-impact tour companies and nonprofits across the Keys are showcasing these natural worlds. We meet three ecotourism champions dedicated to protecting the islands for posterity.

Billy Litmer sits on a sun-dappled porch, squinting beneath a baseball cap – the hat bears the words 'Honest Eco'.

“It’s a value statement that we wear on our head every day,” he tells me. “We have to answer to that name and make sure we’re living up to our vision.” 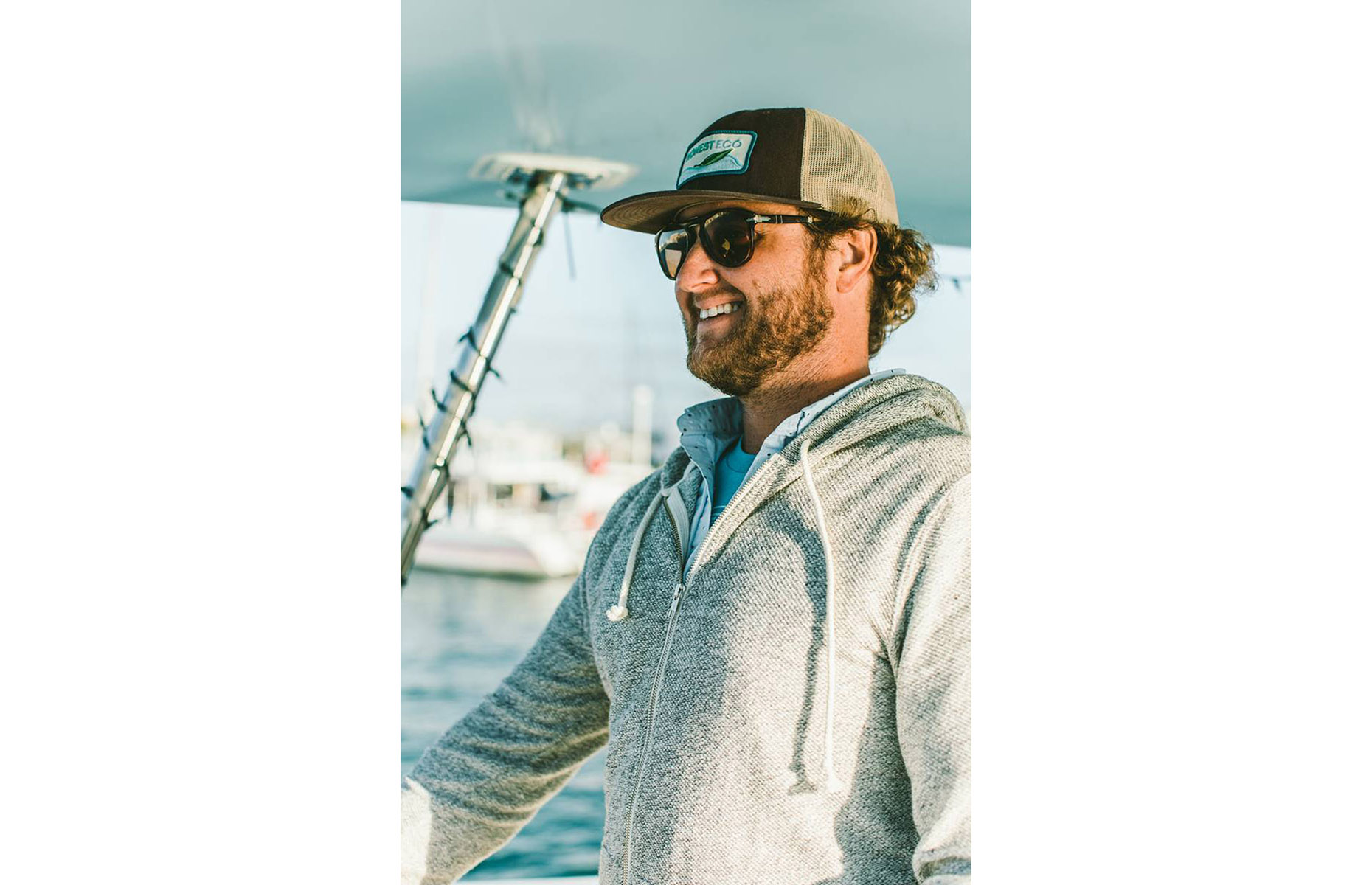 When Litmer founded Honest Eco in 2014, that vision was clear: he wanted to create an ethical and sustainable tour company that was anchored in education. Offering a break from Key West’s many booze cruises, the Kentucky-born biologist took visitors out in search of dolphins, providing expert narration along the way. His tours proved popular and, eight years on, he’s still riding the wave.

“You can read things and you can have a cerebral understanding of conservation – but to actually go out on the water, to actually see the animals, that hits you more emotionally,” Litmer says. “I think ecotourism can be a strong force for conservation.”

'Ecotourism' is an often exploited term; tours, hotels and attractions around the world are guilty of inflating their green credentials to keep up with a sustainable travel 'trend'. But at Honest Eco, it’s about more than lip service – and when it came to building a new tour boat, Litmer put sustainability front and centre.

“We wanted the boat to be as fuel-efficient as possible, because climate change is a huge threat,” Litmer says. “If we don’t deal with climate change, then every other conservation effort fails, because the planet will change faster than the wildlife as we know it can adapt.” 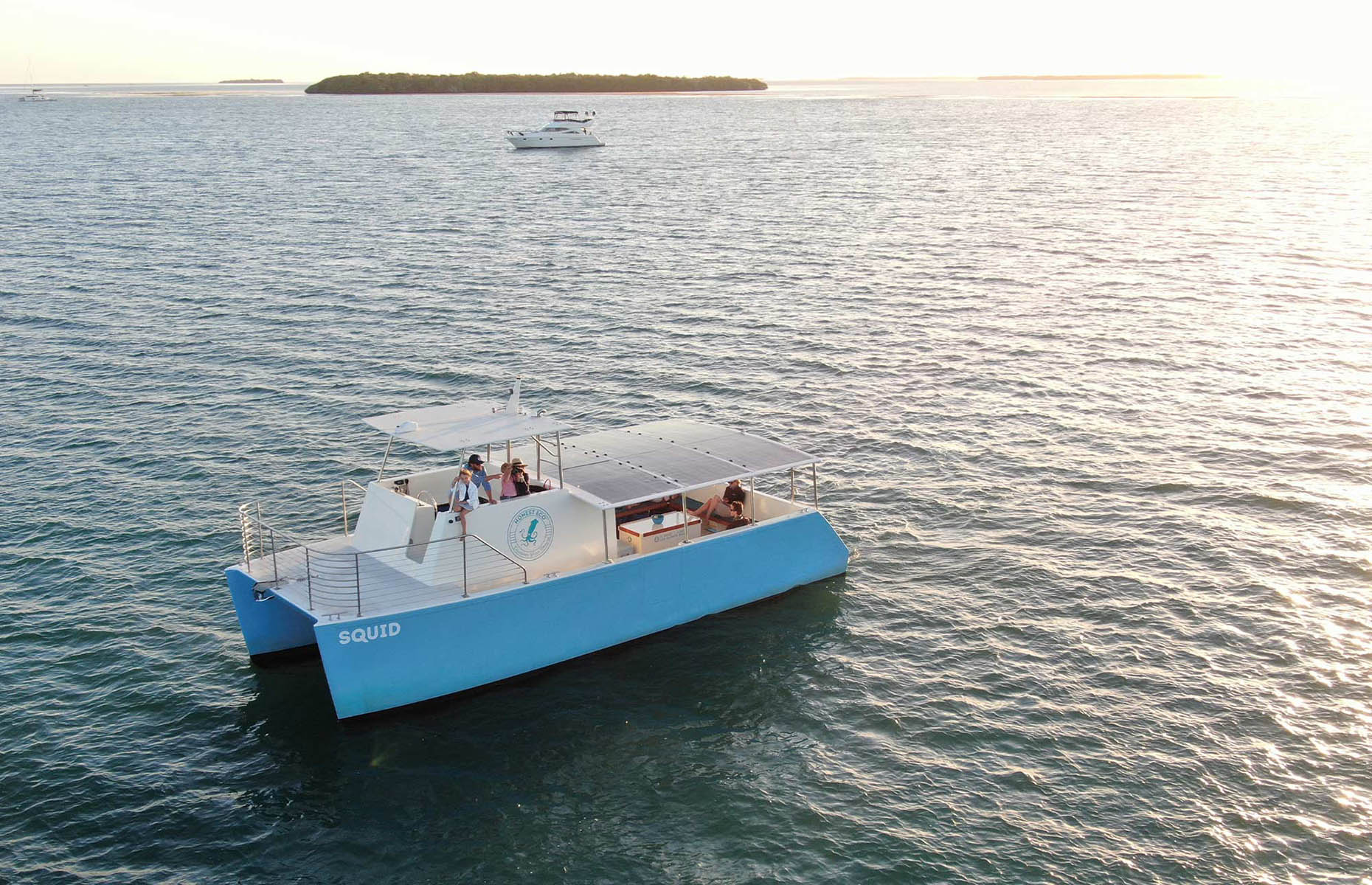 That’s why Litmer, along with Joe Kitchell of Left Coast Composites and fellow captain Nicole McLaughlin, built SQUID – it’s an electric hybrid boat powered by a lithium-ion battery and it’s the first of its kind to be certified by the US Coast Guard.

The boat’s foredeck has some height to it too: that’s so visitors can get stellar views of frolicking dolphin pods from a distance that doesn’t disturb them. During tours, Litmer and his crew – most of whom have biology or environmental science degrees – moor up and take guests on a snorkelling adventure. They dive beneath the blue to see a colour-splashed reef alive with angelfish, stingrays and grouper.

“If you’re snorkelling, and you’re learning about where you’re going, you’re less likely to stand on the reef or do things that may damage it,” Litmer says. “We take out 10,000 guests per year and a lot of them are young people who we might be able to inspire – and maybe they’ll go on to do something great.

“I think that most change is rooted in a combination of heart and mind.”

It was a cold snap in Maine that first brought Bill Keogh to the Keys.

“I was there studying for a science degree and it was below zero for three or four days in October,” he tells me. “I was thinking ‘maybe there’s somewhere warmer’. I went into the photo lab where I worked and there was this little sign that said ‘spend the winter in the Florida Keys as a photo intern at marine science camp’. I applied for the job and I got it. That was in 1980.”

Four decades later, the islands’ warm climes and bountiful wildlife still have Keogh in their grip. A naturalist and photographer, he’s been running low-impact, eco-focused paddle tours from Big Pine Key for 30 years. He strikes out into the Lower Keys’ backcountry, where mangrove islands bristle with reddish egrets and great white herons, and the turtle grass twitches with juvenile fish.

“This is a pretty unique jewel,” Keogh says. “Particularly because of the blending of the temperate and the tropical in this area; we have coral reef and pine trees, all on the same island. A lot of the critters here are endangered and genetically they’re one-offs.”

One such 'critter' is the Key deer, a beloved sub-species of the white-tailed deer that’s evolved to live in this subtropical archipelago. Their population took a hit in 2017, when Hurricane Irma ravaged the island – but they’re still largely held up as a conservation success story. 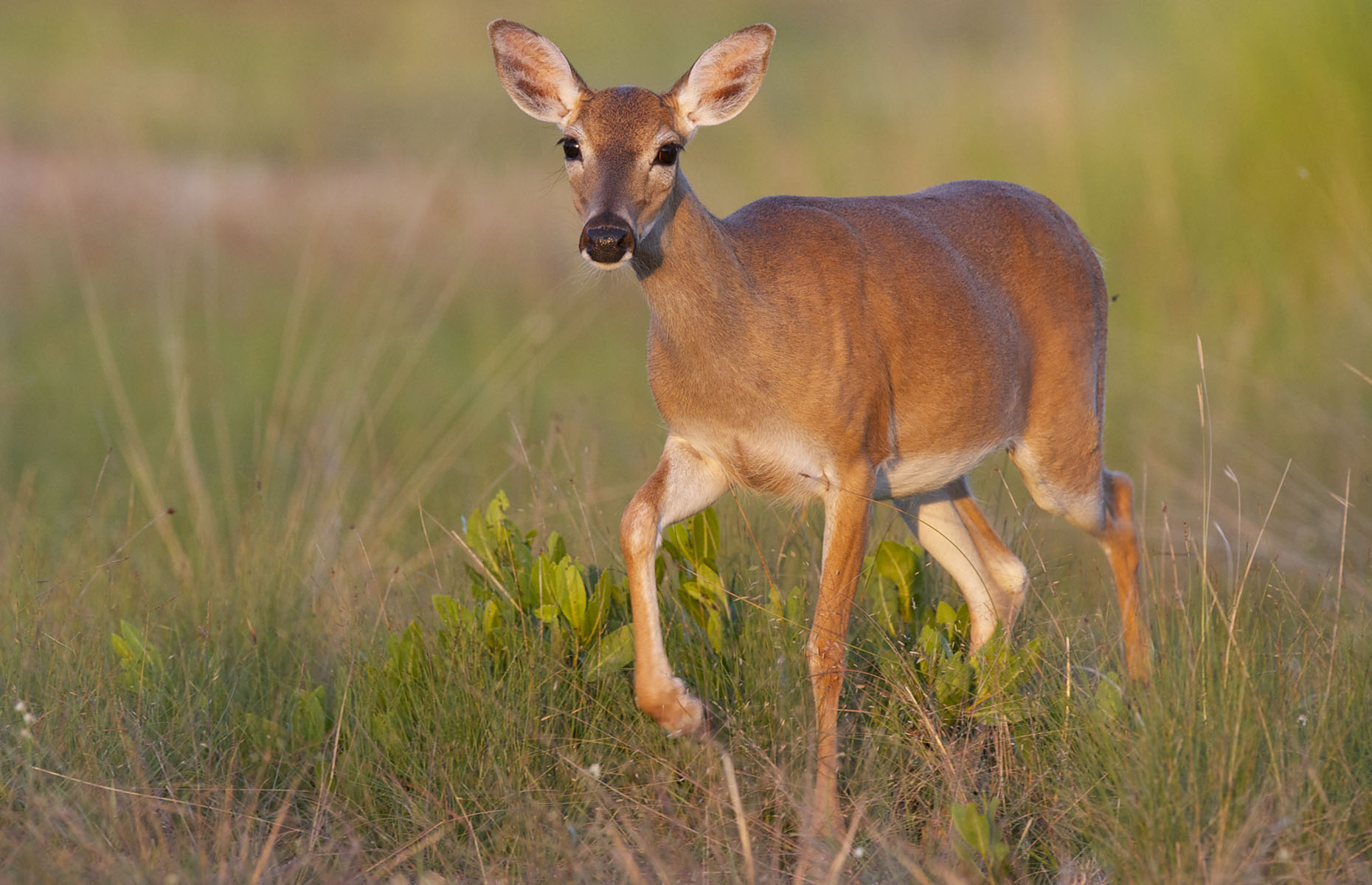 Just a handful of Key deer remained in the mid-1900s, after the species was hunted to near extinction. Yet the formation of the National Key Deer Refuge brought them back from the brink and they now number in their hundreds again.

“I feel pretty fortunate that I’m in this specific area of the Keys, which has had a lot of protection afforded to it,” Keogh continues. “If you don’t protect biodiversity, the whole system can collapse.”

That’s the whole point of his tours – Keogh hopes that those who paddle out with him will be inspired to protect this natural world. “When I go to sleep at night, I feel good about the interactions I’ve had with people,” he says. “And what I hope they will bring home.”

Bette Zirkelbach leans against an electric-blue tank, which is filled with shallow water. In it, there’s a young green sea turtle with slow flippers and a pecan-coloured shell. She moves in a lazy circle, staying close to the surface of the pool.

“That’s Luna,” says Zirkelbach, who’s dressed head-to-toe in powder-blue scrubs. “You can typically gauge a turtle’s health by the water’s depth. If they’re weaker, it’s going to be shallower.”

I’m at Marathon’s Turtle Hospital, a facility that’s been rescuing, rehabilitating and, where possible, releasing formerly sick turtles back into the wild since the 1980s. Zirkelbach – a Delaware native who “fell in love with the Keys as a diver in the early Nineties” – has managed the hospital for the past decade.

Little Luna is one of her most recent patients. She has fibropapillomatosis, a disease that causes turtles to swell with debilitating tumours – Luna’s growths cover her eyes, so she’s blind and struggling to feed. The disease affects 50% of the green sea turtle population in and around developed isles with warm climates and though its exact cause is unknown, one thing’s pretty clear. “It’s human impact,” Zirkelbach says.

That’s just a drop in the ocean. Many of Zirkelbach’s inpatients have so-called 'Bubble Butt Syndrome'. The name might be jocular, but the reality isn’t: boat strikes and other traumas cause air pockets to form in a turtle’s shell, meaning they’re left perpetually floating, unable to dive for food.

Climate change is a problem too. A turtle’s sex is determined by the temperature of the sand in which eggs are buried: those incubated above 31°C (88°F) will be female. As temperatures climb, the number of male hatchlings has plummeted in the Keys and beyond. 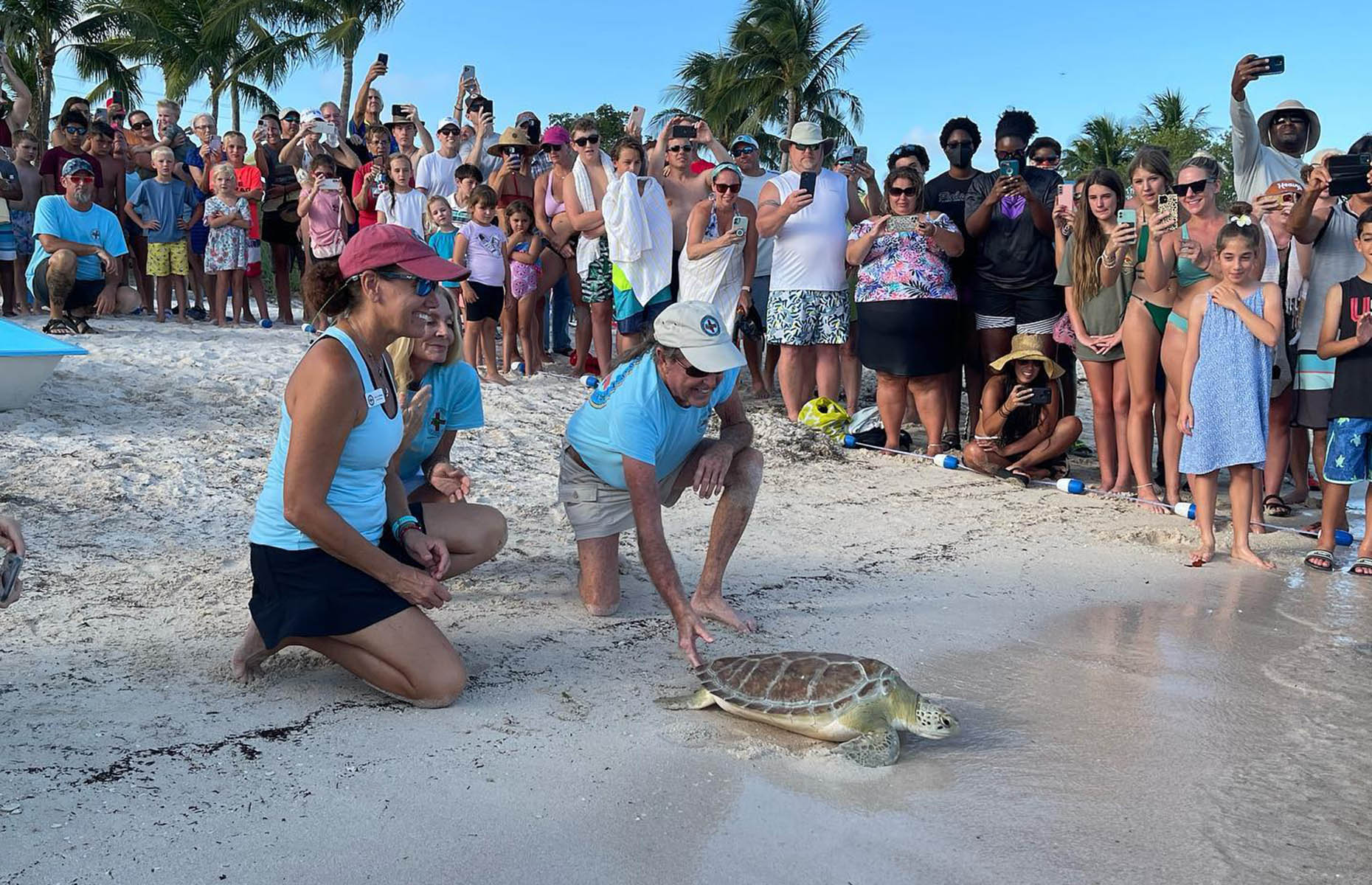 For Zirkelbach, then, saving these creatures is critical work. “Sea turtles are among the oldest animals known to man; they were swimming in our oceans when dinosaurs roamed our planet,” she says. “And they’re vital to both our coastal land areas and to our seas.” They help maintain seagrass beds and coral reefs through grazing, and female turtles bring vital nutrients from the ocean to the shore when nesting too. “They really are incredible animals,” she says.

And though Zirkelbach describes the working hospital as “the heart of what we do”, the facility is about raising awareness too. “We want to help people understand why it’s important to protect sea turtles. Right now six out of 10 rescue calls are from people that have come through our facility and admission fees to the Turtle Hospital feed the operating budget too,” she says.

“It’s an amazing example of how ecotourism can help the survival of a species.”

READ MORE: Explore the Florida Keys: where to stay, what to eat and the top things to do