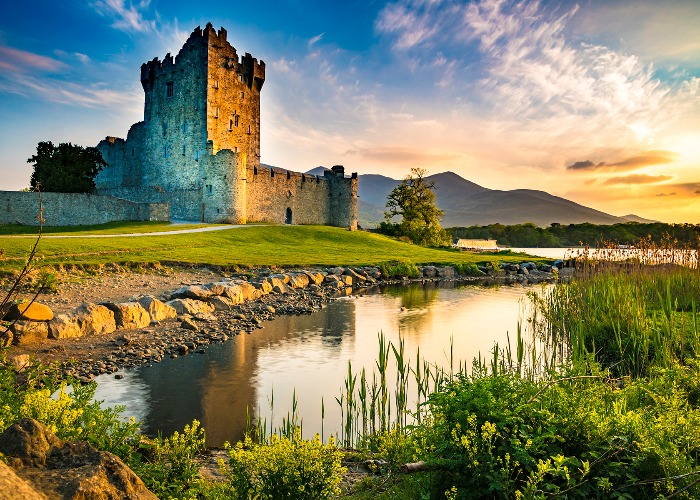 The Emerald Isle is a land of fortresses, mystical manor houses and castles with a colourful past.

From island boltholes oozing Celtic romance to craggy ruins brooding by the coast, Ireland’s castles are the stuff of fairy tales. Here’s our pick of the ones you need to visit in both Northern Ireland and Ireland.

Blarney is the castle on everyone’s lips. Literally. The 1446-built fortress (just outside Cork) is known across the world for a stone built into the battlements, said to bestow “the gift of the gab” when kissed. Origin stories abound: some say the Blarney Stone is a biblical relic, others say it’s a part of Scotland’s stone of Scone. Today’s castle-keepers claim a local witch revealed its magic powers.

If you want to test the theory, you’ll need to clamber to the top of the keep through narrow spiral staircases and windswept rooms, before dangling head-first 90 feet (27m) above the ground to reach the Stone. Iron bars stop you from falling and a strong groundsman holds you securely as you bend over backwards in search of eloquence.

Once you’ve done the deed, you’re free to explore 60 acres of glorious parkland, which contains an ancient dolmen (a type of megalithic monument) and a garden filled with poisonous plants. 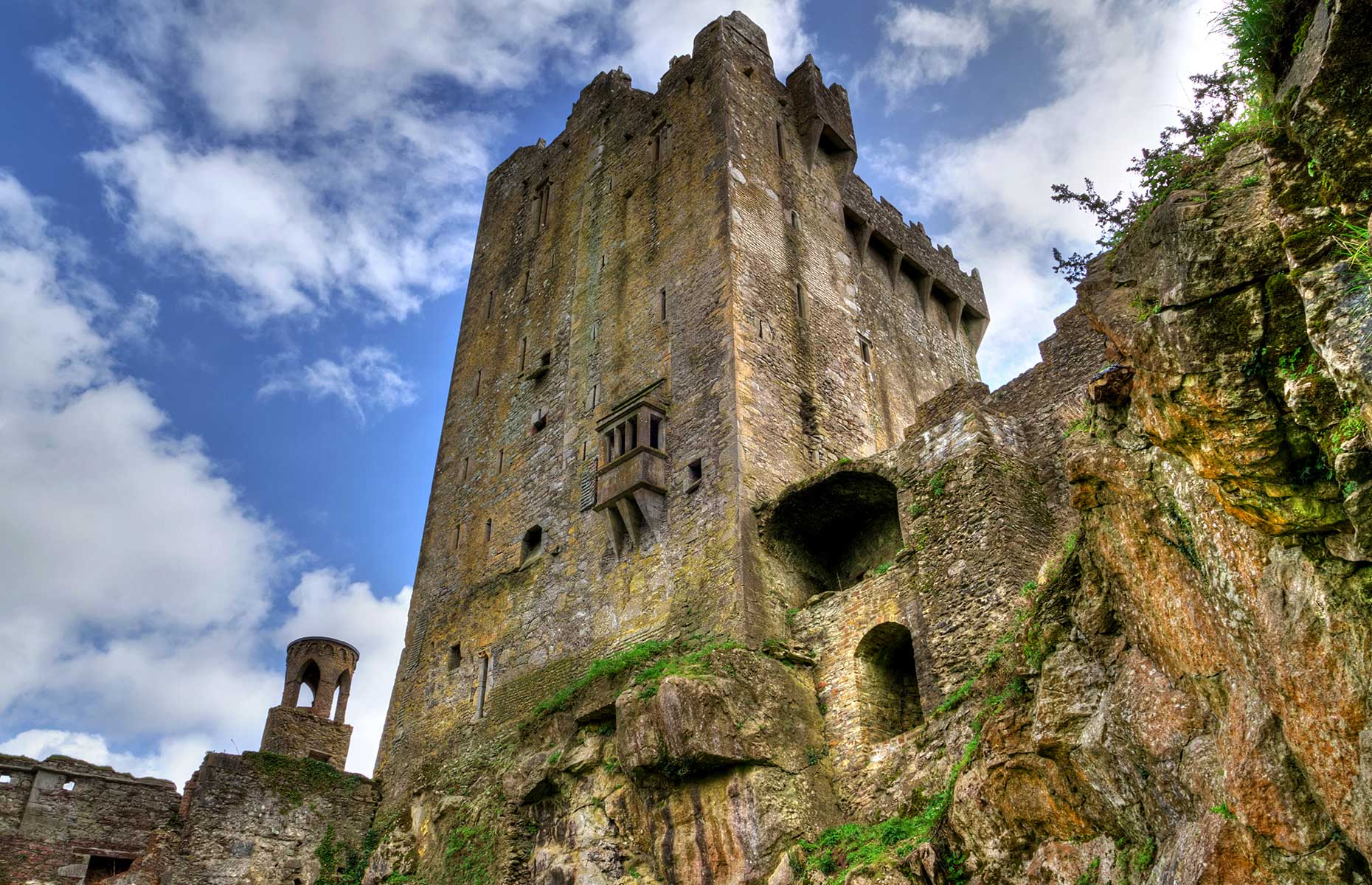 Game of Thrones fans will recognise Dunluce as the Iron Islands’ precarious Pyke Castle, and it’s clear why this real-life ruin was picked to represent the inhospitable territory. Situated on Northern Ireland’s rugged Antrim Coast, close to the Giant’s Causeway, Dunluce is the epitome of Irish mysticism: it features in tales of feuding clans, power struggles and even ghost stories.

One apparition that’s said to stalk the grounds is Maeve Roe, a young woman imprisoned in the castle by her father because he didn’t approve of her choice of husband. Maeve attempted to escape with her beau by taking a rowing boat out of the “Mermaid’s Cave” below Dunluce Castle, but they were both killed.

Once you’ve finished searching for Maeve’s ghost among those cold flagstones and cragged cliffs, you can visit the vast cavern – if you’re not afraid of the 115 steps down to it (and back up again).

This arresting ruin sits on an outcrop overlooking Cashel and showcases some of Ireland’s best scenery: a round Rapunzel-like tower, a perfectly dilapidated Gothic cathedral, a ruined Romanesque chapel and green fields all around. As the seat of the Kingdom of Munster, Ireland’s most southerly province, the rock has long been significant to the nation’s history: it’s said that St Patrick himself converted pagan King Aengus to Christianity on this site in the 10th century, earning it the local nickname “St Patrick’s Rock”.

As one of Ireland’s most-visited attractions, the Rock of Cashel is easy to reach. It lies just off the M8 motorway between Dublin and Cork, and regular buses depart from the capital. When you arrive, stop in the visitor centre to discover fascinating tales and artefacts, including the original cross of St Patrick.

Want something with a bit more craic? The Brú Ború Heritage Centre, next to the car park, is a truly interactive and immersive experience of Irish culture, hosting regular music shows and storytelling events. 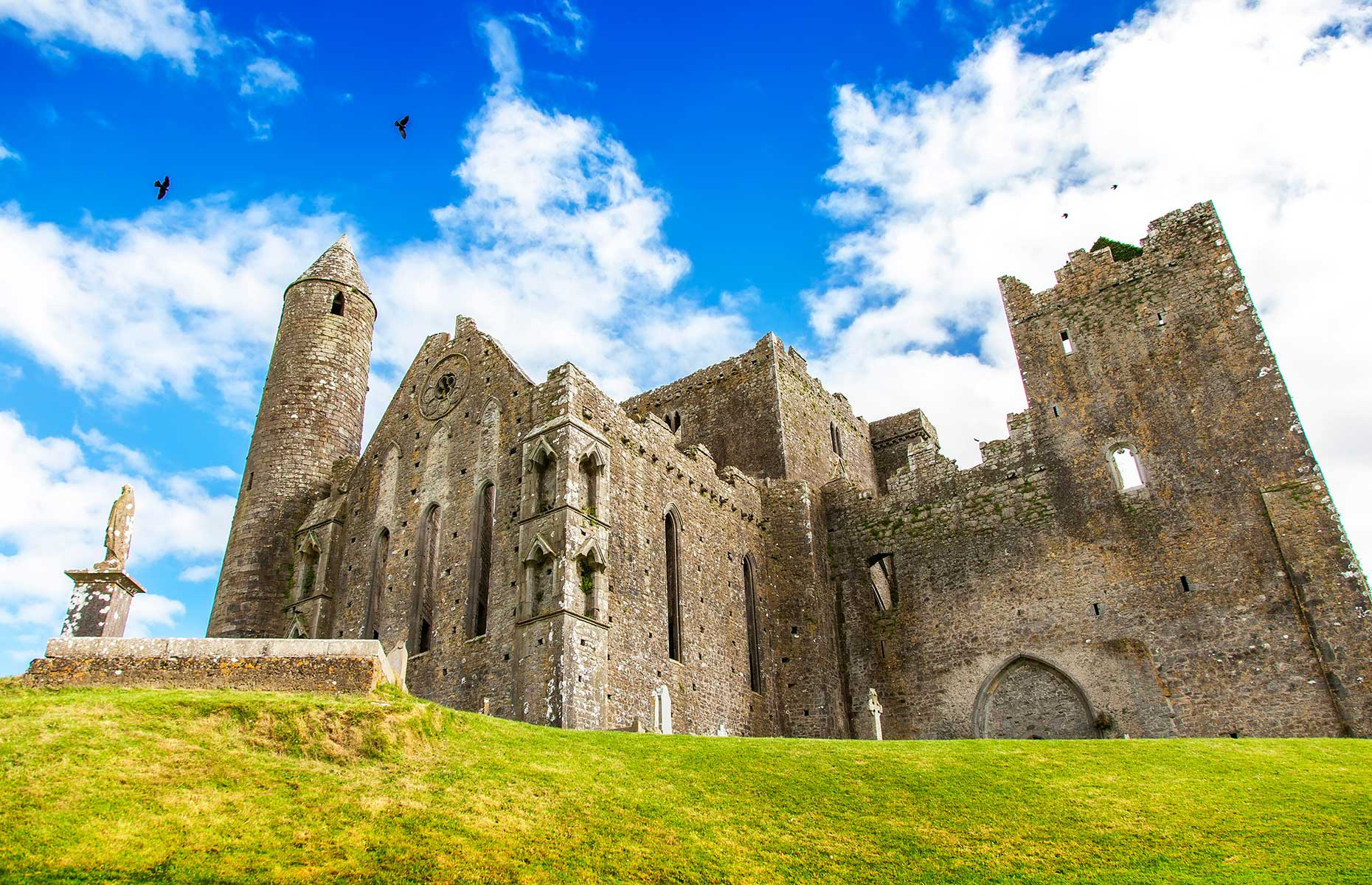 History is palpable when you take an early morning stroll around the remains of this 15th-century castle, standing out through the mists of Lough Leane.

As the seat of the O’Donoghue clan, it’s a formidable fort: layer upon layer of high stone walls protected the chieftain and his family, intimidating any would-be invader. Unfortunately, it could not withstand an attack by Oliver Cromwell’s forces in 1652, and the castle now lies in ruins.

You can easily include Ross Castle on any excursion into Killarney National Park, or even the scenic Ring of Kerry route – but the best way to see it is via a traditional rowing boat. Come on the first morning of May, and it’s said chieftain O’Donoghue Mór rises from his slumber below the lake on a magnificent white horse. If you see him, you’ll have good fortune for the rest of your life, but the real prize is seeing this spectacular castle at its most mysterious. 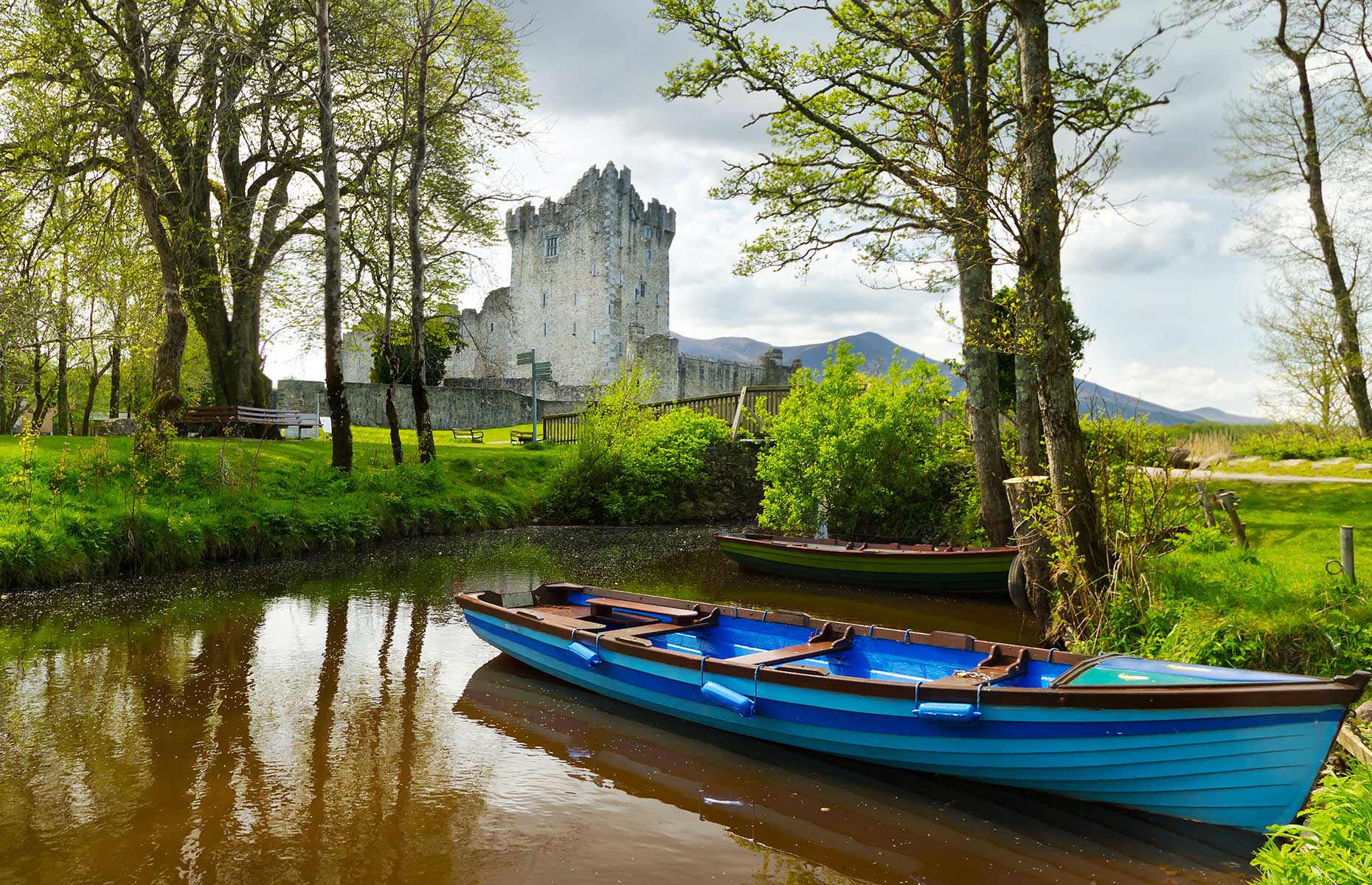 This tiny, hard-to-reach islet in the heart of Lough Key was the seat of the McDermott clan from the 12th century – but it was beset with bad luck.

Roscommon’s version of Romeo and Juliet tells of a beautiful McDermott daughter, Una, who died of grief on Castle Island after being forbidden to see her lover, Tomas. She was buried on nearby Trinity Island, so Tomas swam there every night to mourn. One night, he drowned on the journey, and was buried with Una. A rose bush is said to have sprung up at their grave, forming a lover’s knot with its branches.

Today, climbing plants have taken over the former keep and courtyard of Castle Island, but it makes for an incredible photo opportunity. Take a boat trip over the lough to capture the island’s best angles. While you’re visiting Lough Key, there are lots of other things to enjoy; try an adrenaline-pumping assault course, or swap thrills for chilling out on endless walks through verdant Irish woodland. 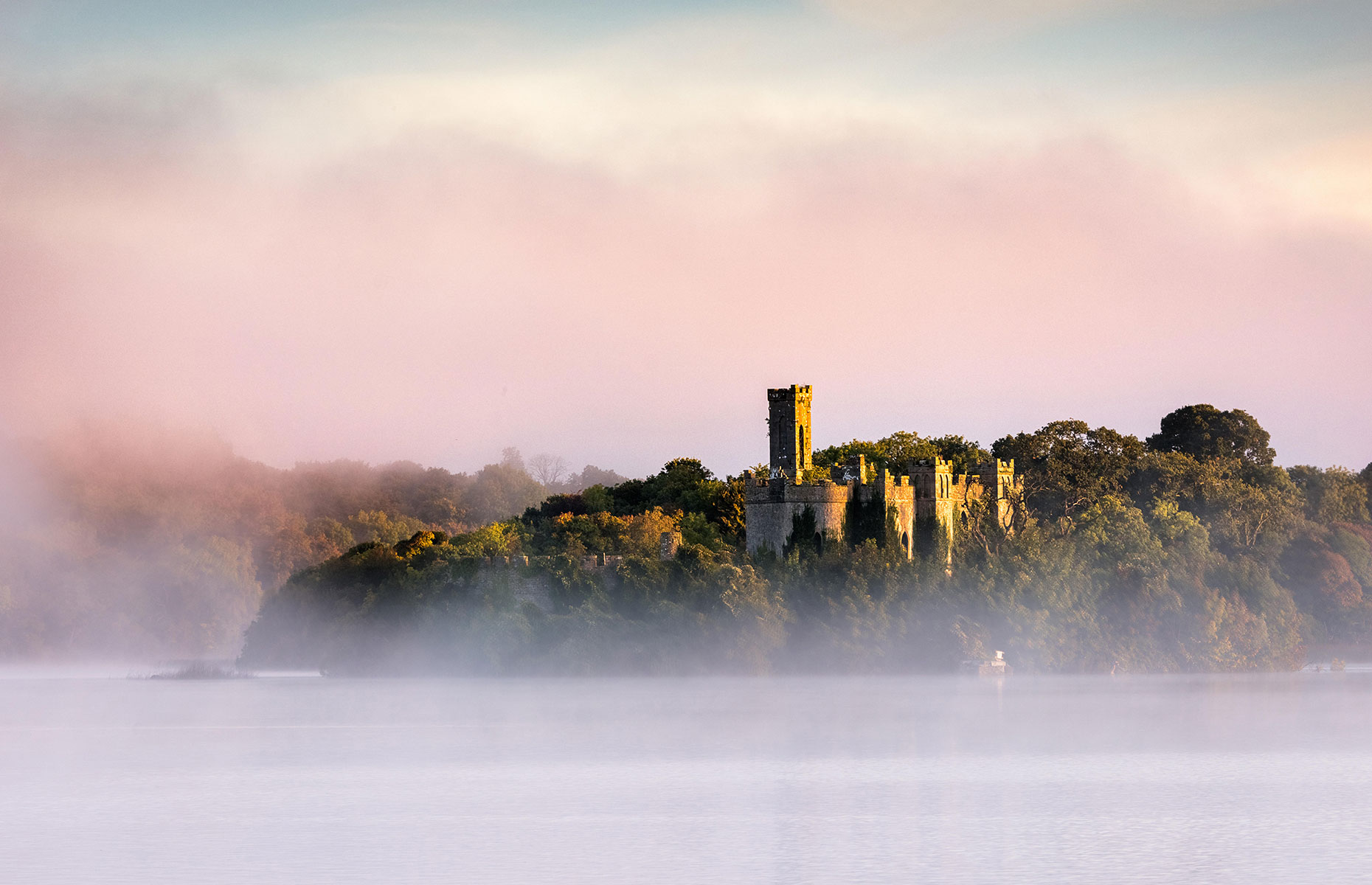 The turrets and arched windows of the near-850-year-old Lismore Castle look as if they might fall into the rushing waters of the River Blackwater below. But don’t be fooled by its fragile appearance: this castle is a stronghold of English aristocracy.

It was purchased by the Dukes of Devonshire in 1753, and continues to be privately owned by the family. As such, if you want to see the fine art, crimson carpets and opulent furnishings inside this elusive mansion, you’ll need to hire it out for the day.

Thankfully, it’s possible to marvel at the castle from the outside, as the gardens are open to the public seven days a week. Breathe in the scent of delicate, pink orchid petals, pay a visit to the fruitful kitchen garden, or lose yourself along the ancient yew avenue. Spend a little time in Lismore itself, too: go souvenir shopping in its vibrantly painted streets, or fish for salmon and trout in the river. 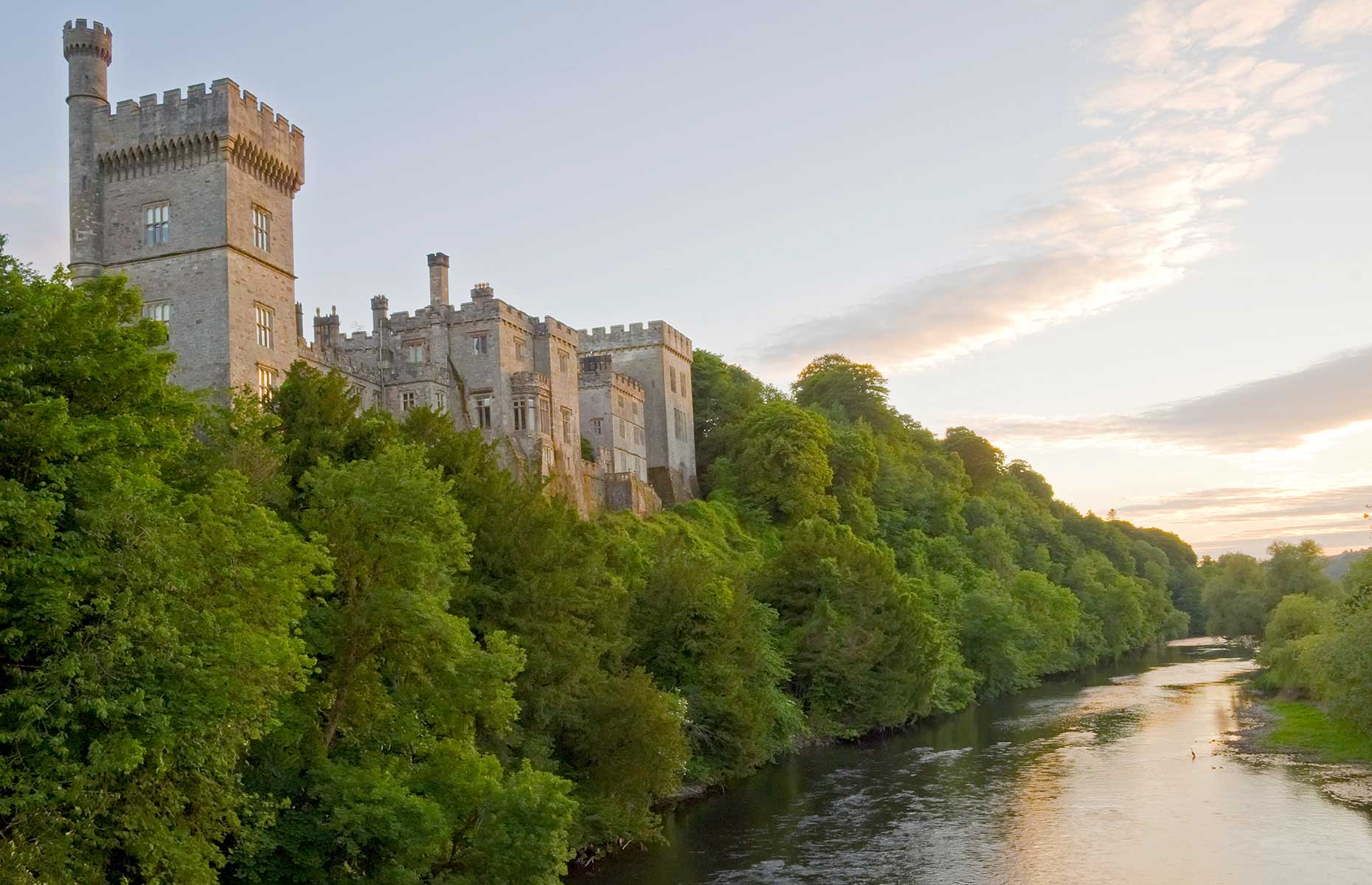