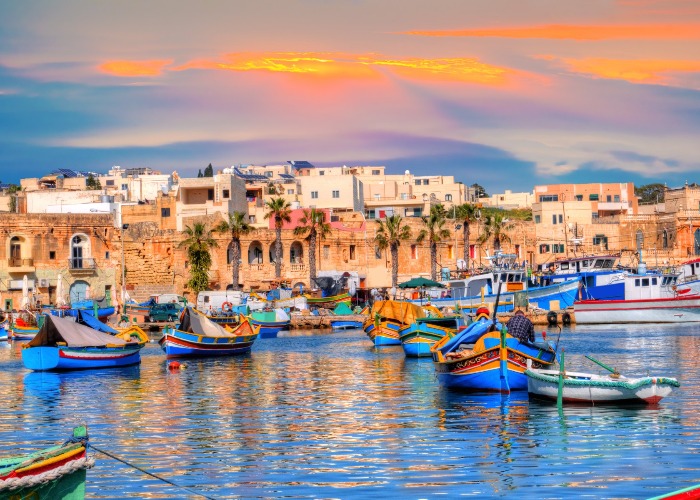 Planning a getaway to Malta? This beautiful Mediterranean archipelago has it all: fantastic hotels, delicious cuisine and more golden beaches than you can shake a selfie stick at.

Struggling to work out where to stay on this sunny isle? We’ve got the lowdown on the best hotels for every type of traveller, whether you’re a solo backpacker on a budget or a multi-generational party of five looking for a kid-friendly crash pad.

Not quite ready to burst your bubble? Retreat to the beautiful Westin Dragonara Resort, perched on a private peninsula jutting out into the Mediterranean sea. Don’t be deterred by the fact that there are 408 rooms here – there’s a real abundance of space, despite its close proximity to the centre of St. Julian’s, a small town which is just a 20-minute drive from Valletta.

Its beachfront position makes it somewhat of a rarity in Malta, although this isn’t just any beach: the blue-flagged stretch of sand is accessible only to the hotel’s guests, minimising the need for 9am sun-lounger scrambles. 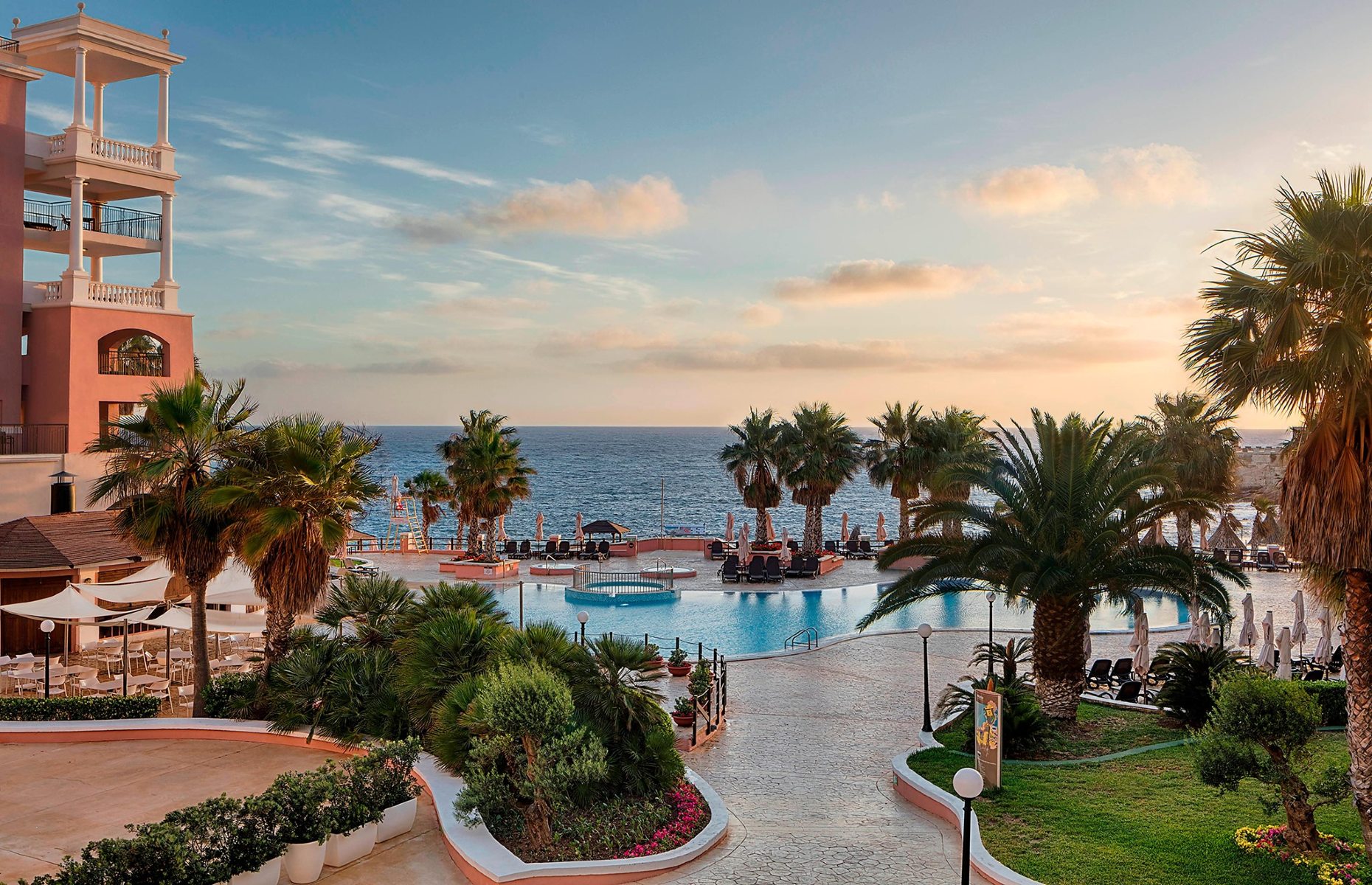 The hotel’s amenities include three swimming pools (two outdoor and one indoor) and a dive centre, and there are five restaurants, including the fantastic Quadro, famous for its delicious seafood (just be prepared for some serious guilt pangs if you’re planning a snorkelling session).
From £280 per night

Best for travellers on a budget: Holiday Inn Express Malta

Budget doesn’t mean basic at this fantastic hotel in the pretty town of St Julian’s. You’ll find all the perks associated with much posher pads: pillow menus, super fast Wi-Fi and seriously powerful power showers, and the location’s hard to beat, too – both the beach and the town centre are just a short walk away.

The hotel has an indoor pool, and guests get free access to the gym next door, too. The best bit? It’s impossible to miss – simply look for the rainbow-hued exterior.

The 118 bedrooms are just as bright, too: think sculpture-like scarlet armchairs and funky, modular furniture in corresponding hues. But don’t panic if you overdid the Bajtra (a potent Maltese liquor made from prickly pear), because blackout blinds come as standard.
From £72 per night

Say hello to Malta’s hippest crash pad – a 21-room hotel next to a pretty harbour and marina, hence its popularity with superyacht owners. You’ll find it in Senglea, an historic city on the eastern coast.

Malta’s beautiful people flock here for the packed calendar of events (a recent example is the pop-up boutique from Maltese swimwear brand Mimie Reed) although the Insta-friendly rooftop pool is our favourite bit – head there to soak up the views of the harbour. 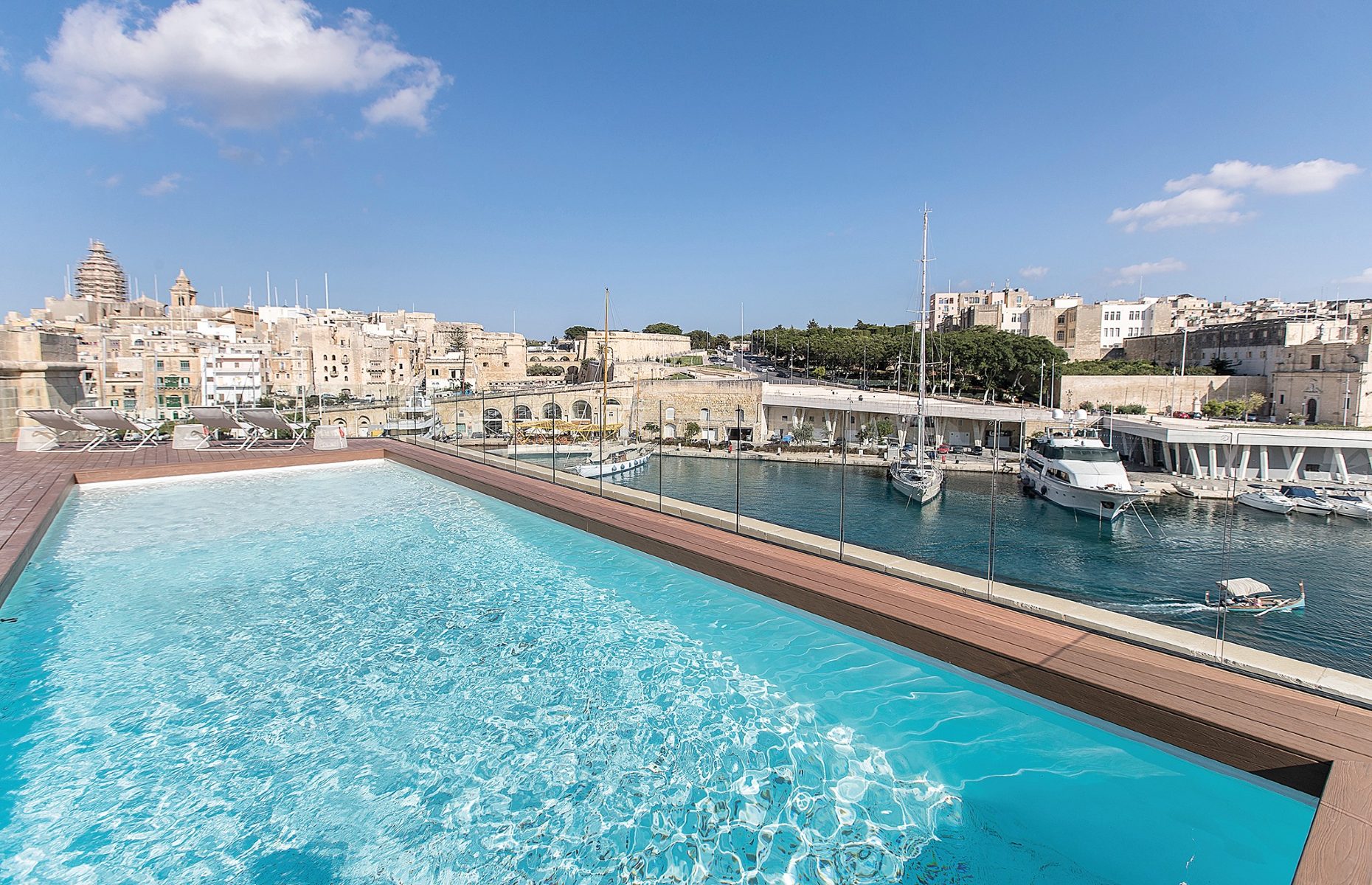 Make sure you check out the hotel’s restaurant, where the encyclopedia-like wine list includes plenty of local tipples – we recommend the Camilleri Laurenti, which is a fruity white wine from nearby Gozo.
From £188 per night

This is another property in St Julian’s – in this case, just a short walk from both the promenade and Balluta Bay, where you can enjoy a leisurely paddle in the shadow of the Carmelite Church, an explosion of neo-Gothic grandeur and one of the city’s most famous landmarks. 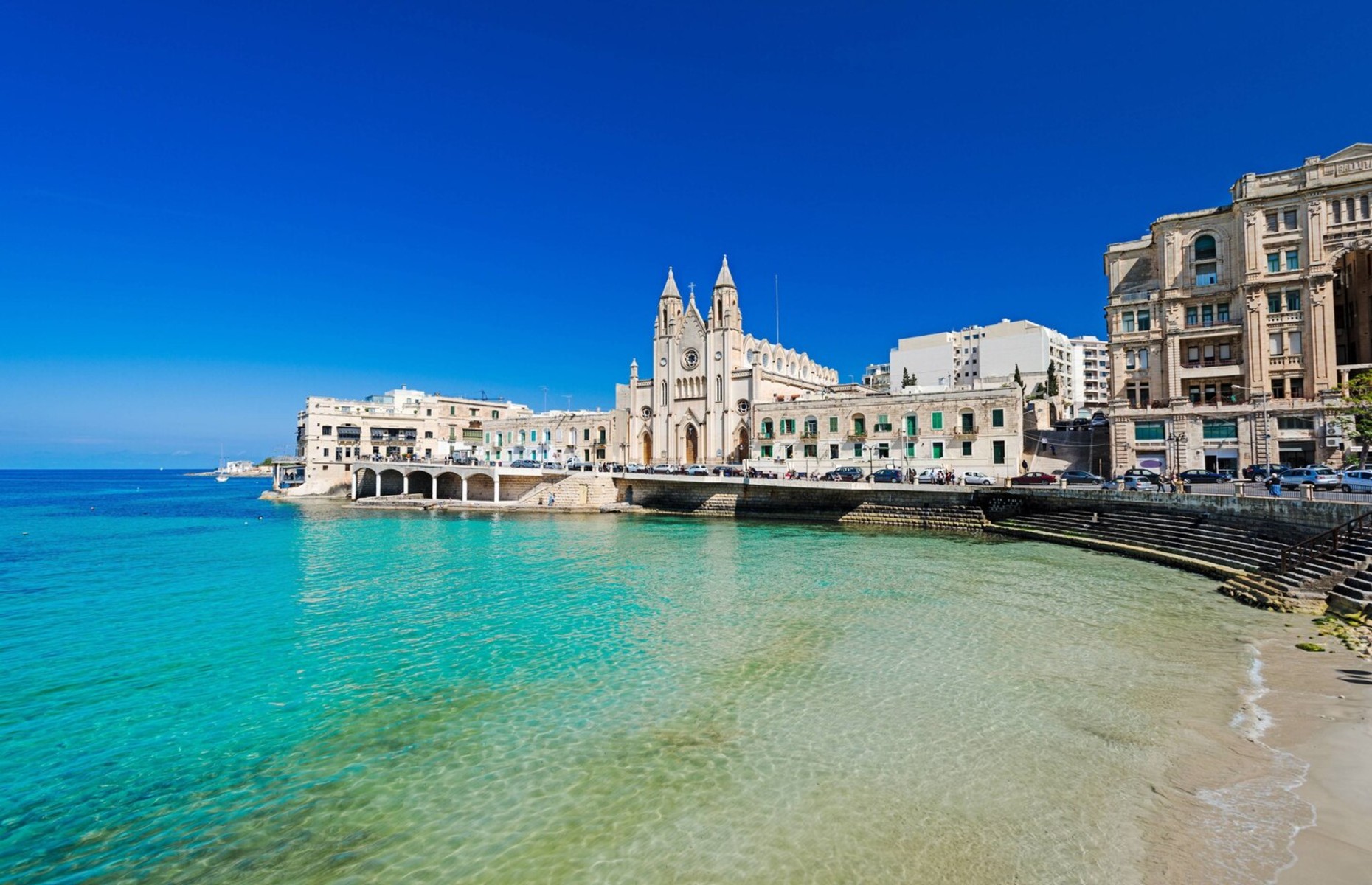 The 301-room hotel recently emerged from a £25 million makeover, and has plenty of bedrooms and suites that boast those coveted sea views. Don't miss the rooftop pool – it's perfect for keeping an eye on your super yacht/pedalo – and the beautiful spa (the Lotus Defence facial is a brilliant option for sun-parched skin). 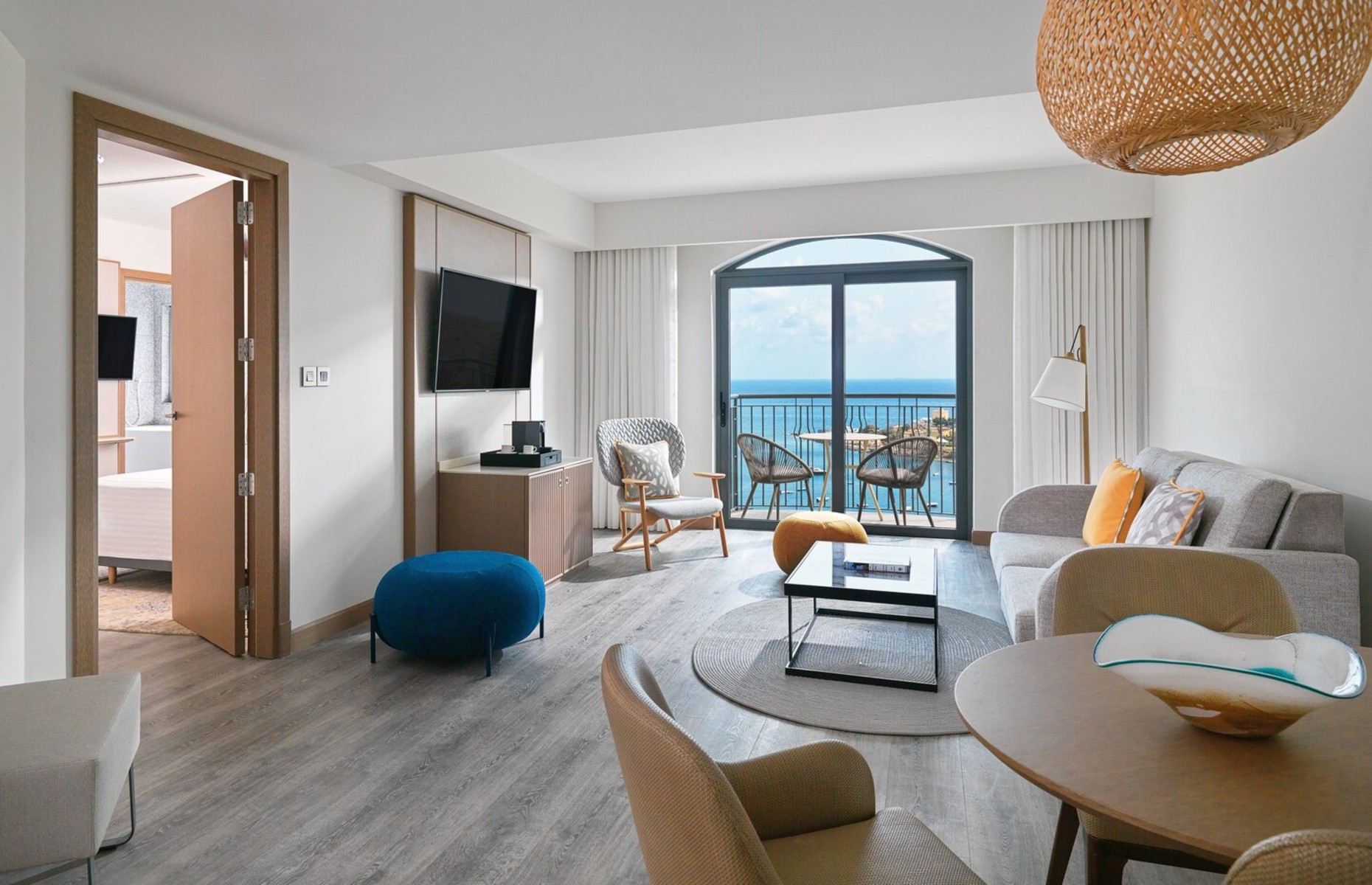 Oh, and the gorgeous Villa restaurant, where you can chow down on Asian fusion cuisine in a building which dates back to the 1800s.
From £248 per night

READ MORE: What the world's biggest hotel chains used to look like

Many visitors to Malta don’t realise how easy it is to hop over to Gozo, just a 45-minute ferry ride from Valletta. And if you’re travelling with kids in tow, the island’s Kempinski Hotel San Lawrenz makes a brilliant base.

A five-star property comprising 137 rooms scattered across semi-tropical gardens, the Kempinski Hotel San Lawrenz has a fantastic kids’ club as well as babysitting services, and the hotel wraps around an enormous outdoor pool complex, with separate swimming areas for children. 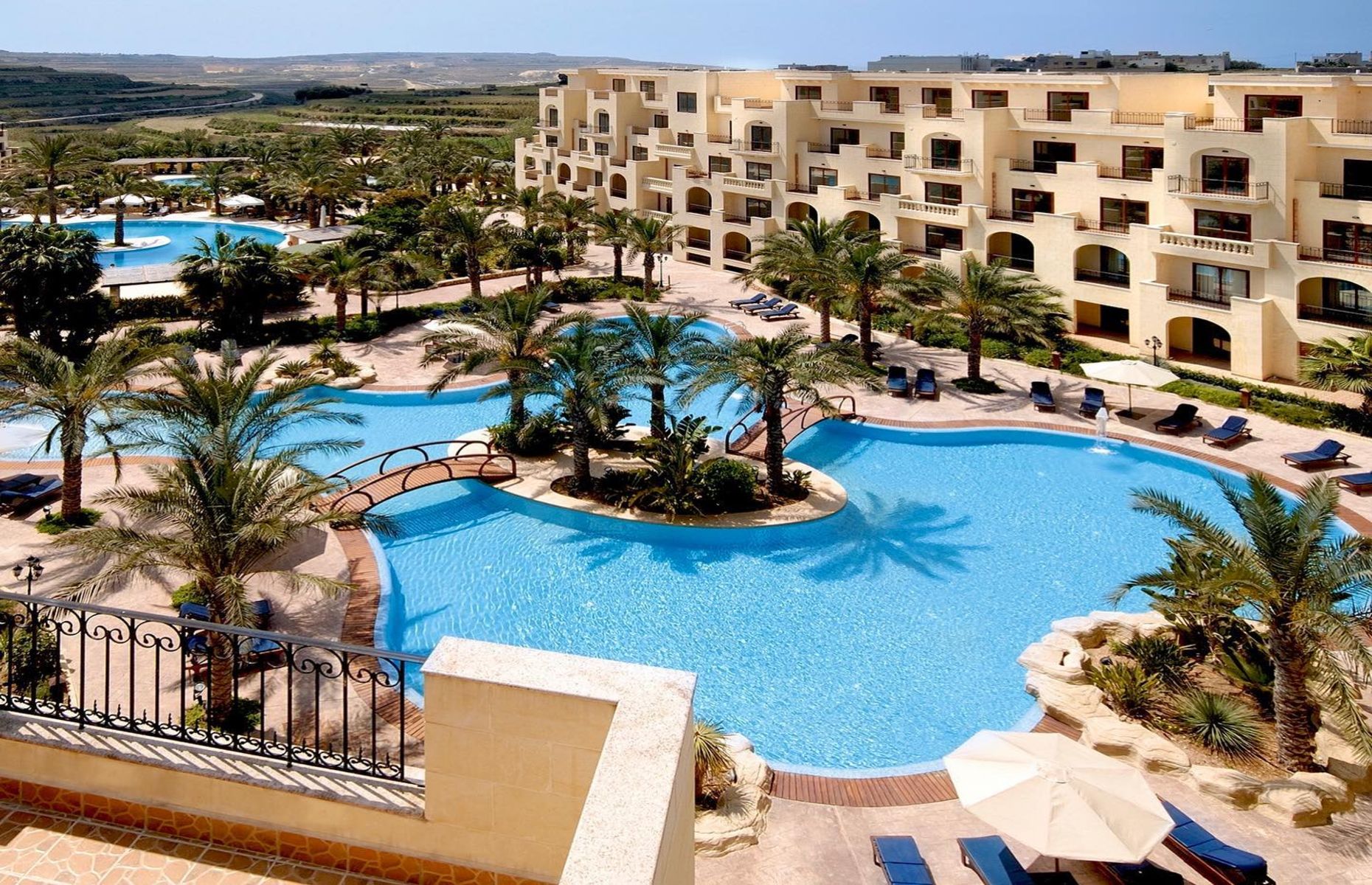 Its position, on the edge of San Lawrenz village, makes it a great base for explorations further afield, and it’s just a 20-minute drive from Mgarr Harbour – the arrival point for ferries.

Don’t miss the chance to check out the nearby Basilica of the National Shrine of the Blessed Virgin of Ta' Pinu (try saying that after a mouthful of Bajtra). A popular pilgrimage spot, it was built to honour a local lady to whom numerous miracles were attributed. 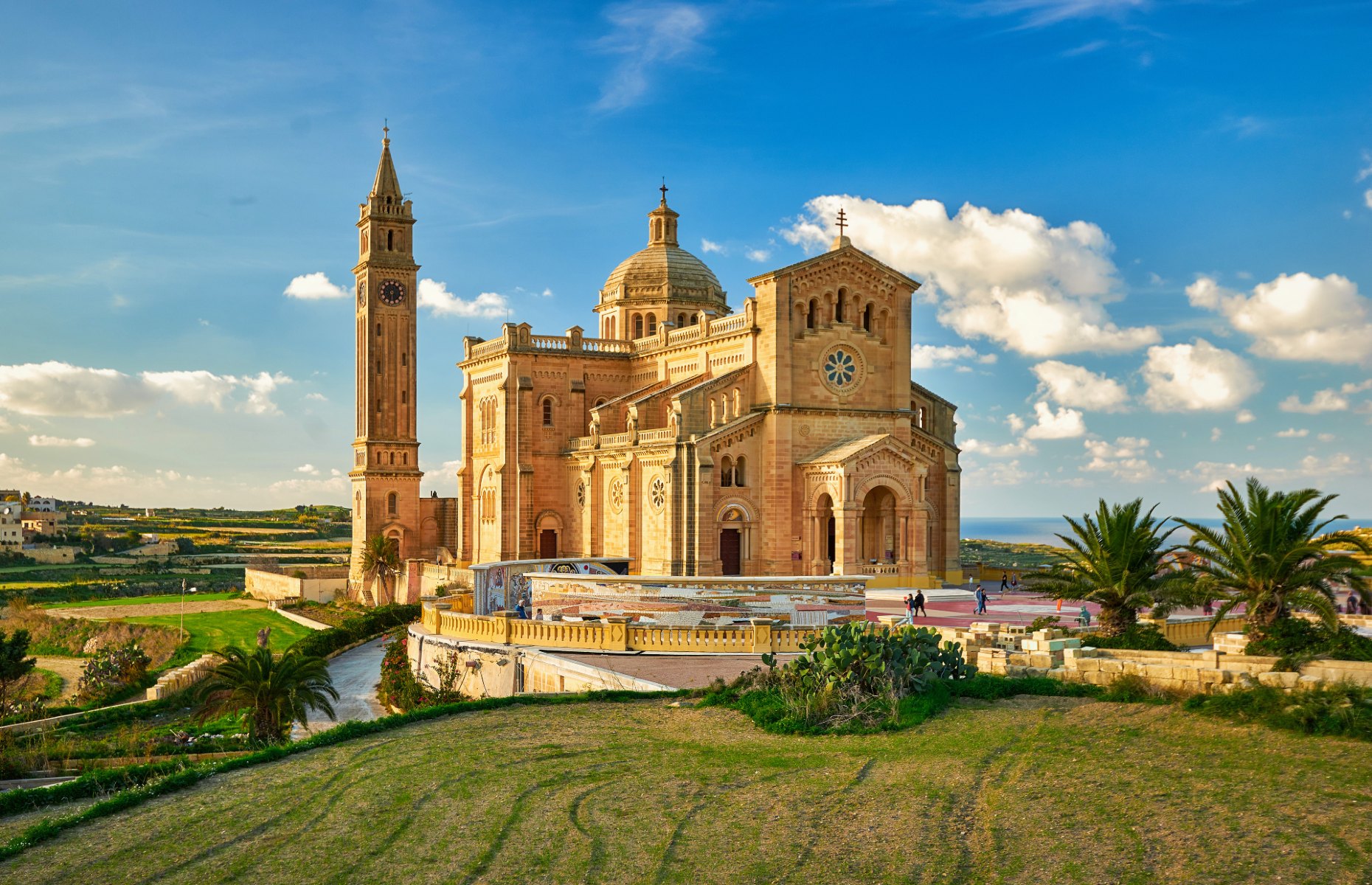 Every year, thousands of people come to give thanks by leaving items connected to the miracles they prayed for, and objects on display include baby-grows, plaster casts and lottery tickets.
From £171 per night

This is one of Malta’s newest crash pads. Valletta’s ultra-chic Iniala Harbour House and Residences opened in 2020, and within a few months its signature restaurant, ION – The Habour, had been awarded a Michelin star (if you manage to bag a table, we recommend the marinated shrimp with ginger and crème crue).

Guests can book a room in either the House, with its meticulously restored cupola, or the Residences (where rooms have private plunge pools, enormous balconies and some of the most eclectic décor we’ve seen in a hotel room) or splash out on the Hideaway, a five-storey guesthouse with two suites and two bedrooms.

Fancy a spot of self-improvement? Activities on offer include everything from painting lessons and underwater photography masterclasses to cookery workshops and wine tasting sessions.
From £300 per night

Best for luxury: The Xara Palace

Keen to avoid the crowds? Book a room at the Xara Palace, a five-star hotel in the fortified city of Mdina, which was once Malta’s capital. This 17th-century palace is part of the Relais & Châteaux group, and feels fittingly luxurious; the 17 suites and rooms are filled with priceless antiques and artworks, and you might well end up sleeping in the same bed that Brad Pitt once dozed off in – he’s one of several A-listers who have stayed here (others include Sharon Stone, Jennifer Anniston, Bruce Willis and Prince Charles). 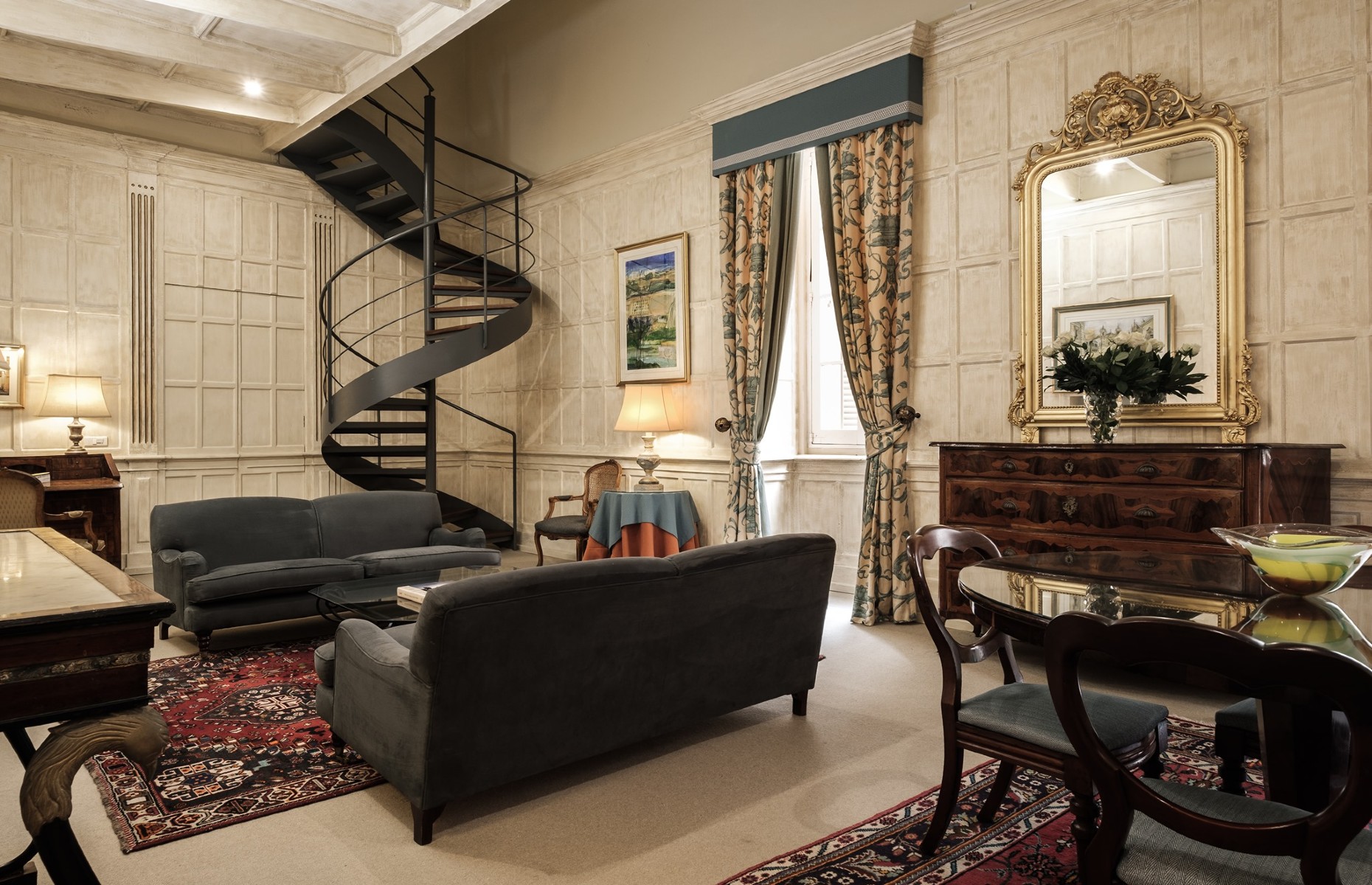 Activities organised by the hotel include a guided food tour which covers both Mdina and Valletta, and a wine tasting experience at the hotel’s Michelin-starred De Mondion restaurant, where pricier tipples on offer include the Salon Cuvee 'S' Le Mesnil Blanc de Blancs Brut Oenotheque, a dry Champagne famous for its fruitiness. The price? £944 a bottle.
From £202 per night

66 Saint Paul’s is a true labour of love – a once-dilapidated 17th-century palazzo transformed into a stunning 18-room boutique hotel by Emma Vernacchia and her husband, Pietro. Many of the original features remain, although there’s a serious dose of luxury (we’re particularly smitten with the cloud-like Hungarian goose down duvets and the beautiful Axor Hansgrohe taps). 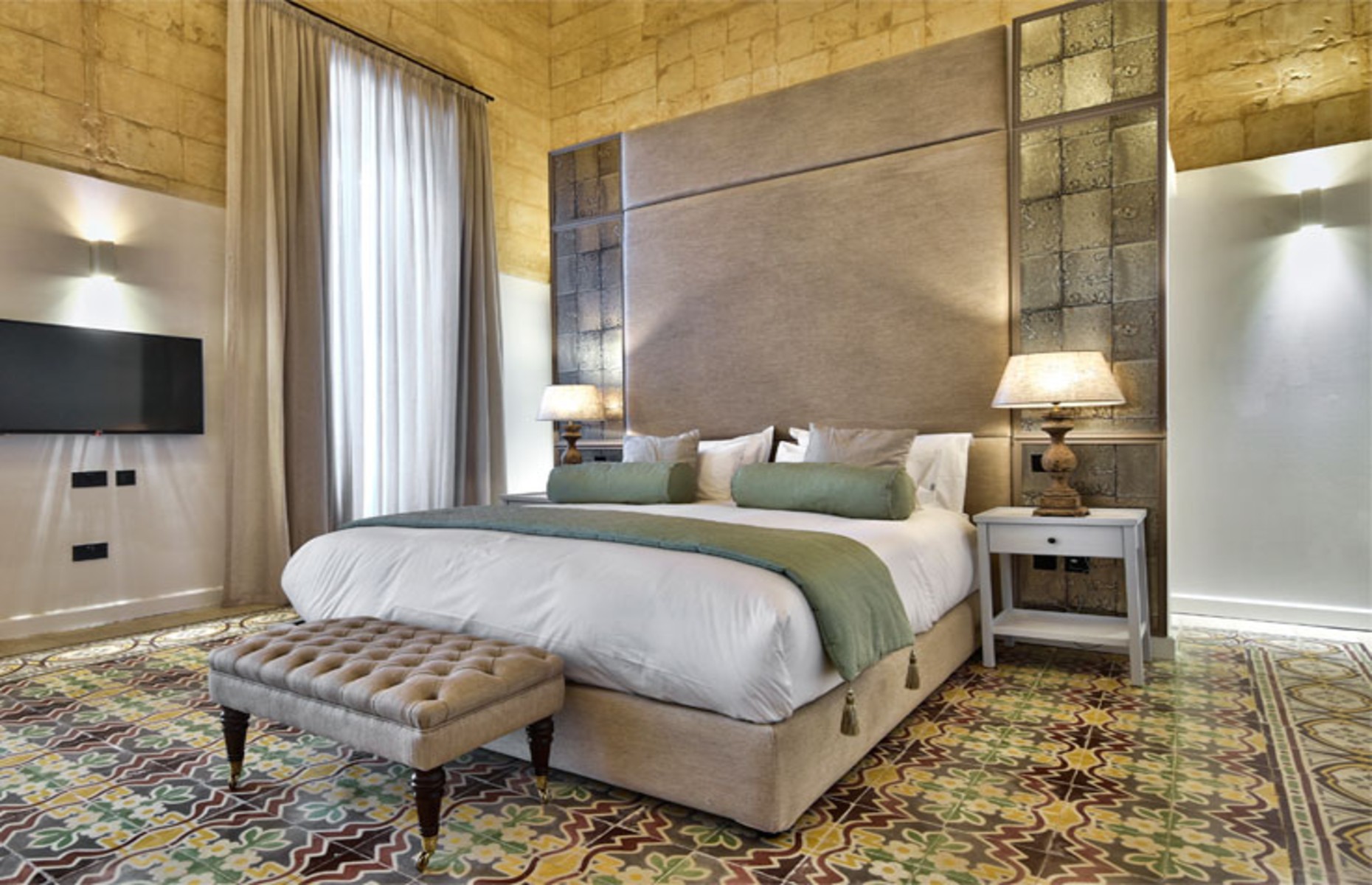 Bag the Grand Suite if you can – highlights include the colourful original floor tiles in the bedroom, and the fantastic views over Saint Paul’s Street, with its beautifully preserved architecture and fragrant cafés selling fresh pastizzis (golden pastries filled with ricotta cheese).
From £137 per night

READ MORE: The world's most beautiful walled towns and cities

Xewkija, on the island of Gozo, is one of Malta’s oldest villages, and it’s filled with historical buildings, including the towering Rotunda St. John Baptist Church (pictured), a sky-scraping stone masterpiece which towers over the surrounding landscape. 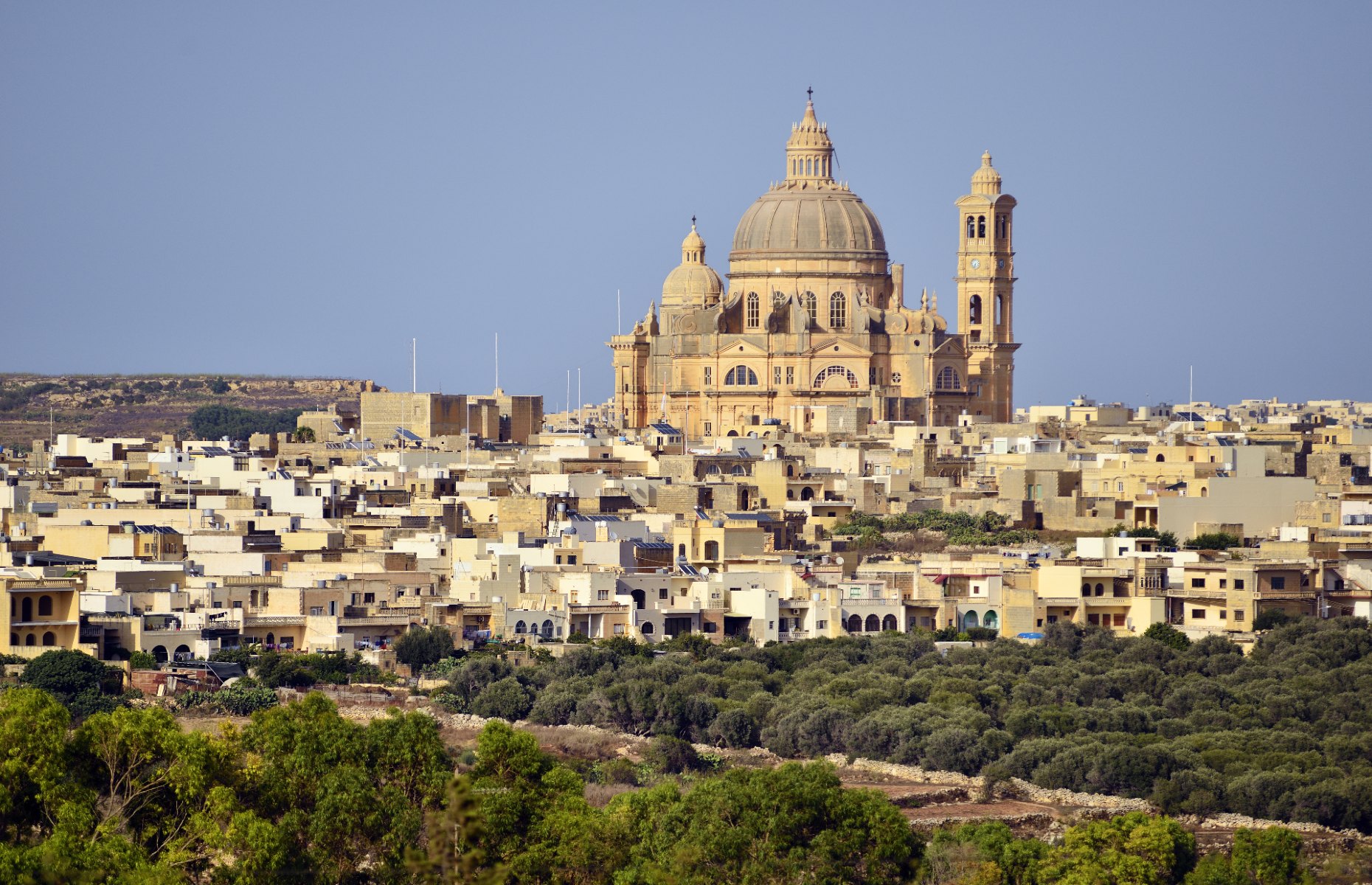 The village is a brilliant base for hikers and cyclists, many of whom base themselves at the wallet-friendly Quaint Boutique Hotel Xewkija, where you’ll find 10 surprisingly spacious bedrooms which wouldn’t look out of place in a glossy travel mag: think pebble-like sinks, lots of exposed stonework and some slick decor. 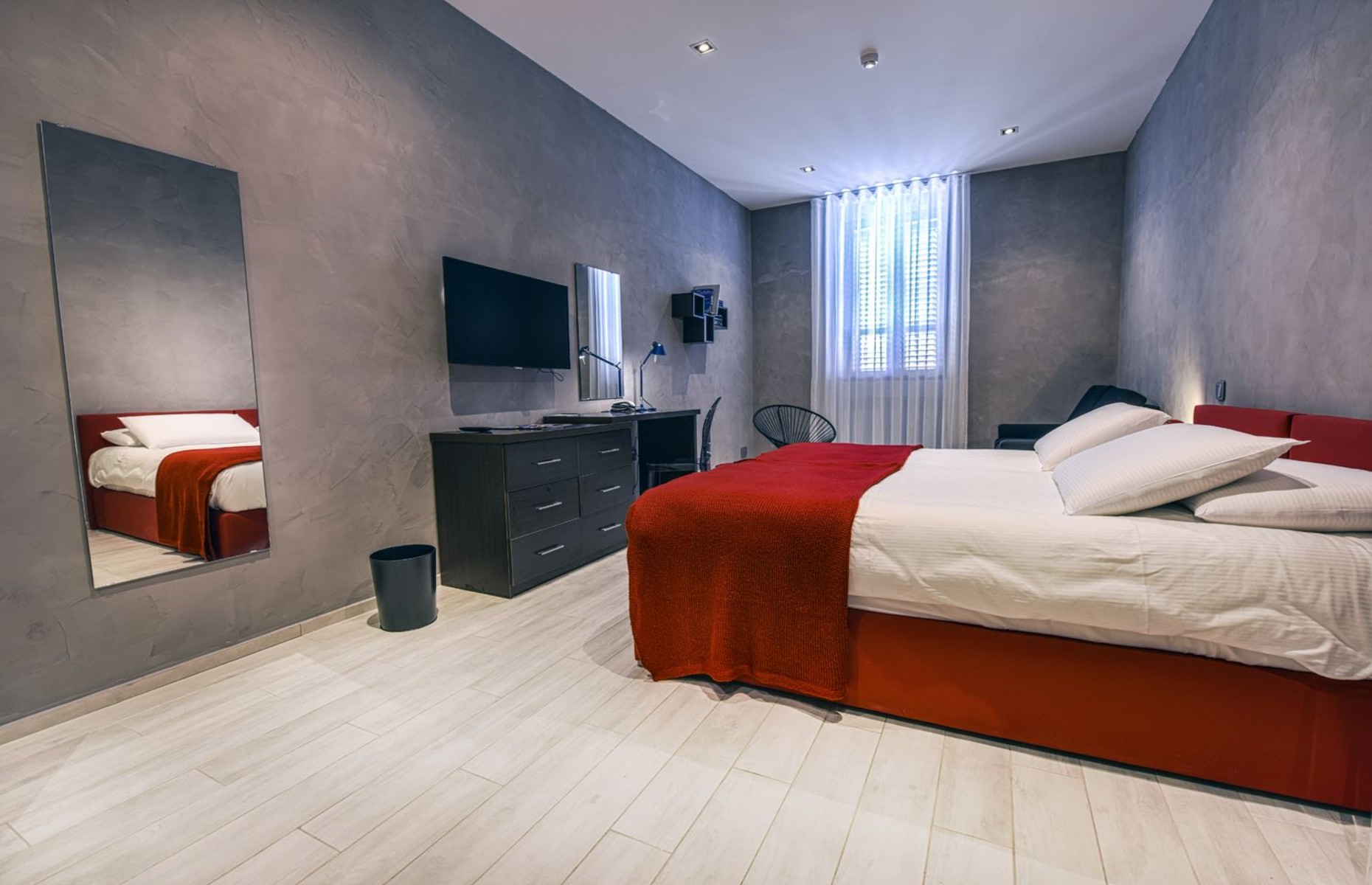 Our top tip? Don’t miss the delicious local specialities served up at the hotel’s Giovanni’s Kitchen & Lounge. Unless you’re a vegetarian, that is – one of the most popular dishes is rabbit, regarded as a delicacy in Malta.
From £60 per night

Book at room at this 481-room hotel, a 20-minute drive north of Valletta, and you won’t just have fantastic amenities (including three pools, a kids’ club, fitness centre and spa) at your fingertips, but easy access to Malta’s best bits – it’s just a short hop to Valletta but you’ll be just a few metres from St George’s Bay, a sandy Blue Flag beach.

One of our favourite spots at the hotel is the Narcis Pool Bar, on the 10th floor – head there to soak up the views with a sundowner before dining at Paranga, the hotel’s seafood restaurant. History buffs should consider a visit to nearby Sliema, home to the ruins of the historic Fort Tigné.
From £206 per night