Explore Sarajevo: the top things to do, where to stay and what to eat

The Bosnian capital, with its Alpine-esque outskirts, Ottoman old town and grand Hungarian high street, has a rising phoenix outlook all of its own.

Why go to Sarajevo

Sarajevo is a patchwork city of myriad cultures. In the very centre of the Old Town, you’ll find a blue-hued Ottoman-style mosque with a rocket-sized minaret, a Neo-Gothic cathedral with two lofty bell towers and the Old Jewish Temple, now the Jewish Museum of Bosnia and Herzegovina, all within a few strides of each other.

Then there’s the architecture. One side of the city is distinctly Austro-Hungarian with grand, symmetrical, balconied buildings, ornate façades and branded high street shops. The other is undeniably Ottoman – all souk-style wooden structures, clay tile roofs and lantern shops. 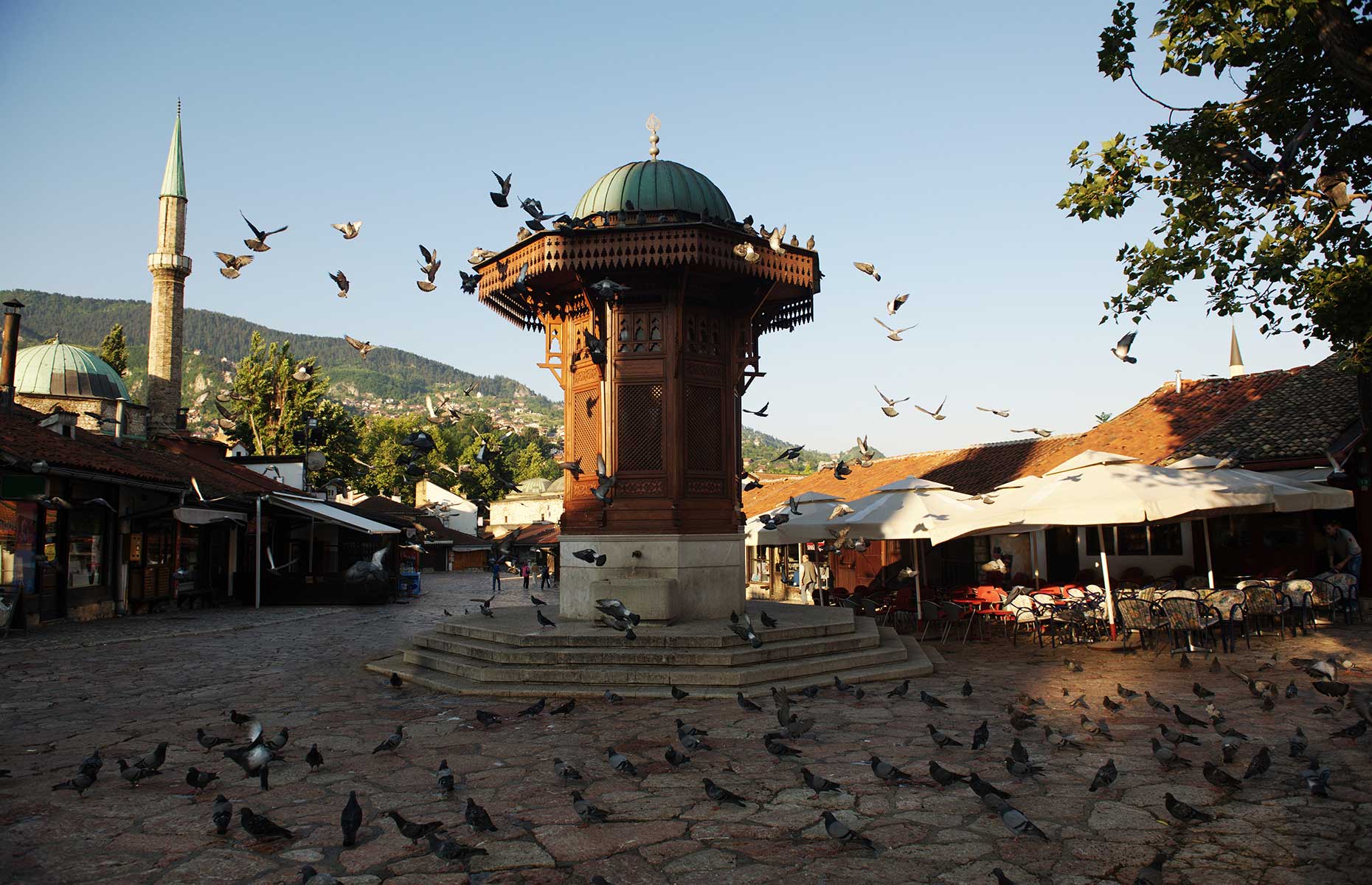 A pavement marker actually denotes the place where the eastern side of the city meets the west. Its function is not to be a dividing line, though. It’s more of a seam, stitching the city’s two sides of the same coin together.

Of course, you can’t talk about Sarajevo without acknowledging that just over two decades ago it was a war zone. Today, it’s unrecognisable as a place of conflict, apart from the memorials and museums dedicated to the memory of those who died in the Siege of Sarajevo and the Bosnian War.

Where once it was close to impossible to get even food and water into the besieged city, flights usually bring visitors in the know to explore the Sarajevo’s charms. And where once the smog of shell fire hung over the city centre, now charcoal-scented smoke plumes from the open fires of restaurants that are usually filled with local families sharing smoked meat platters. 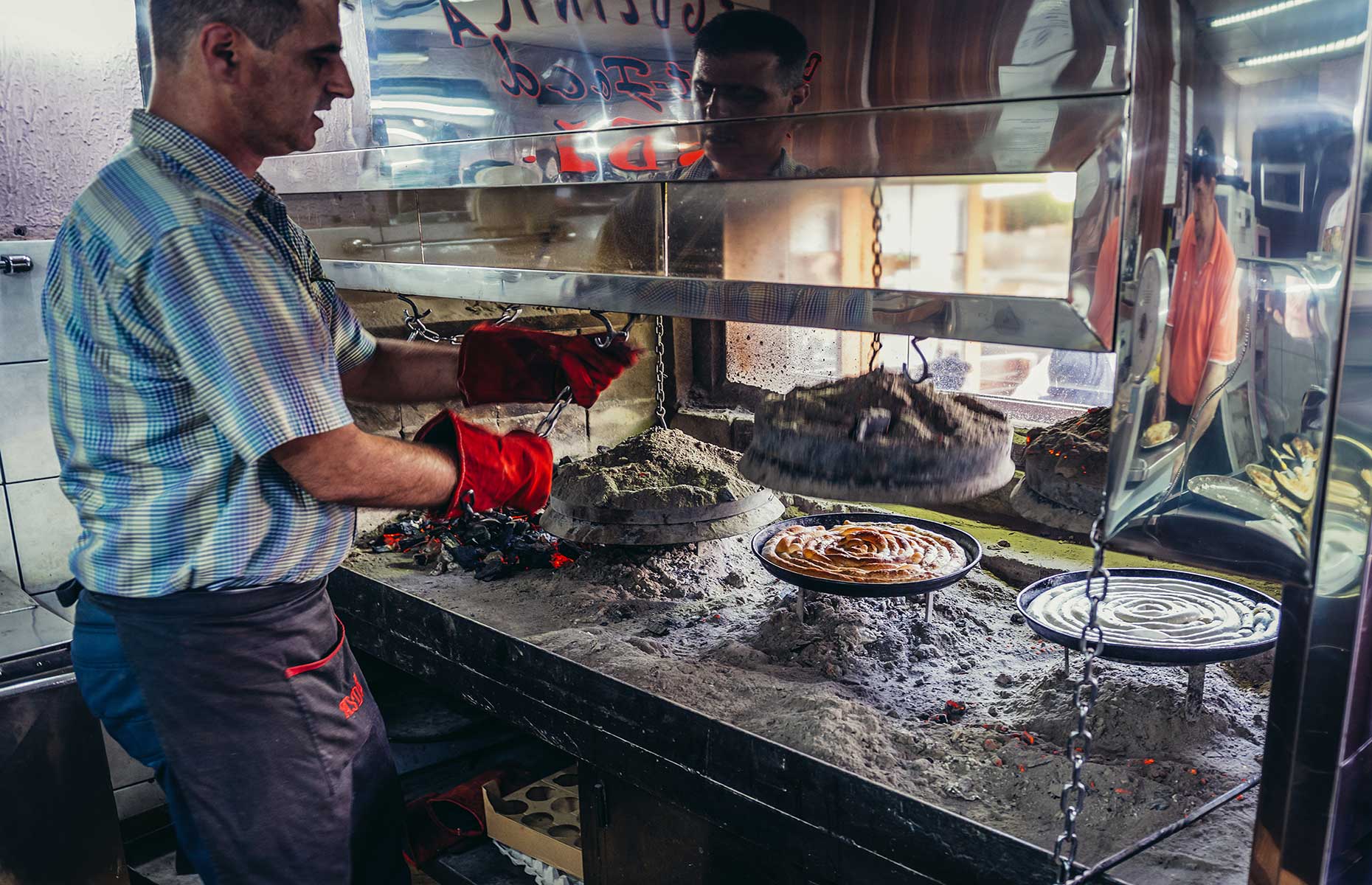 If the scenery, pep and positivity aren’t enough to encourage you to go to Sarajevo, the prices will be. The city offers one of the most affordable city breaks about. When it’s safe to travel again, it should be top of your must-visit list.

READ MORE: 8 essential experiences to have in Montenegro

Top things to do in Sarajevo

Located in the Old Town, Baščaršija is Sarajevo’s ancient bazaar area. Its lanes are set out like a scribble and lined with single storey, red roofed buildings with wooden framed windows and shuttered doors.

Many of these buildings serve as shops and wares like lanterns, hand-made silver jewellery and copper-plated coffee service sets spill out onto the streets. The whole area has a soundtrack of tinny clinking as artisans work on their products in the workshops inside the stores. 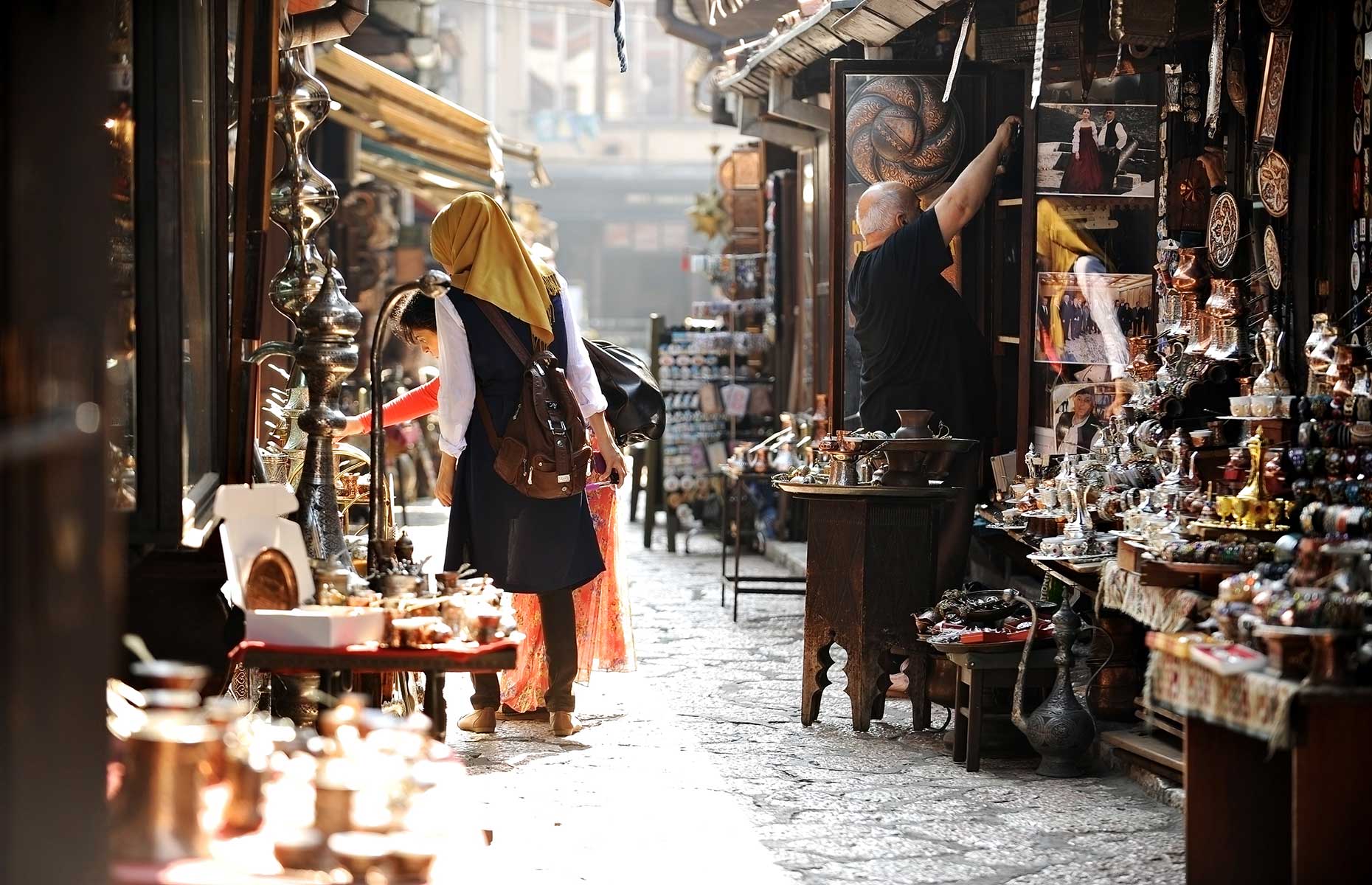 Get your bearings by taking a walking tour of the Old Town. Companies like Urban Adventures offer tours led by locals, so you’ll hear a few stories about local life as well as seeing the guidebook-listed sights like the Gazi Husrev-beg mosque, Sacred Heart Cathedral and the Old Jewish Temple.

The Meeting of Cultures marker is Sarajevo’s own equator. Running across the width of the pedestrianised Ferhadija Street, it marks the point where the Ottoman side of the city flows into the Austrian-Hungarian side.

Look to one side and you’ll see the minaret of the Gazi Husrev-beg mosque needling into the sky. Look to the other and you’ll see the twin bell towers of the Cathedral of the Sacred Heart. Despite drawing attention to two sides, the line is not meant to be divisive. Instead, it’s meant to represent a merger, like a confluence between two rivers. 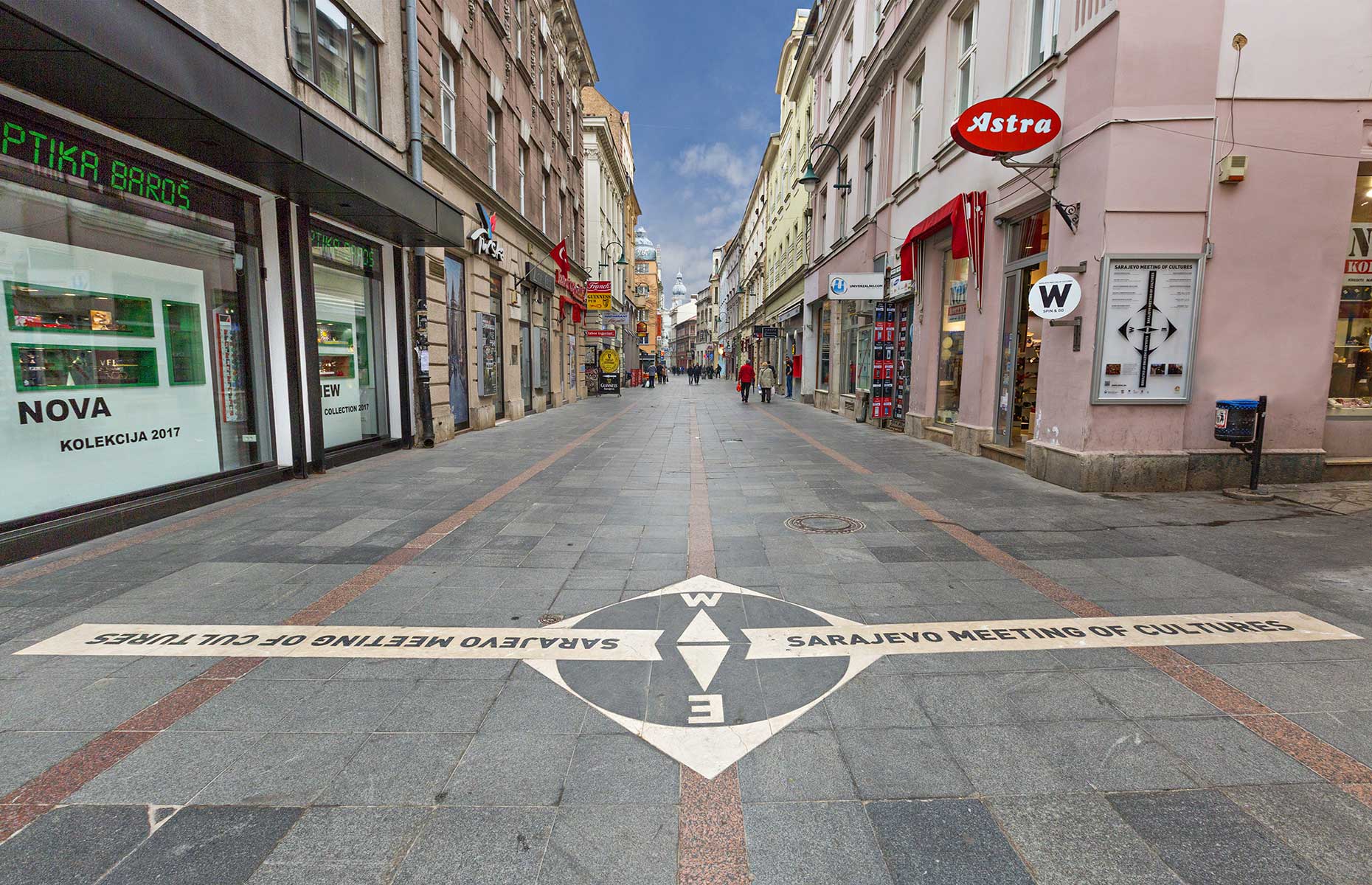 Part of the fortifications that protected Sarajevo in the 18th century, the Yellow Fortress, or Yellow Bastion, is now a panoramic viewing place. You can’t go inside but from the top of the hill that surrounds the structure, you get grandstand views of whole of the city.

You might be surprised to find that the outskirts of Sarajevo have an Alpine look to them thanks to the humpback hills and the red-roofed chalet-style houses scattered across them. The walk here from Baščaršija takes about 20 minutes and there’s a café and picnic benches at the top to refuel with coffee or an ice cream. 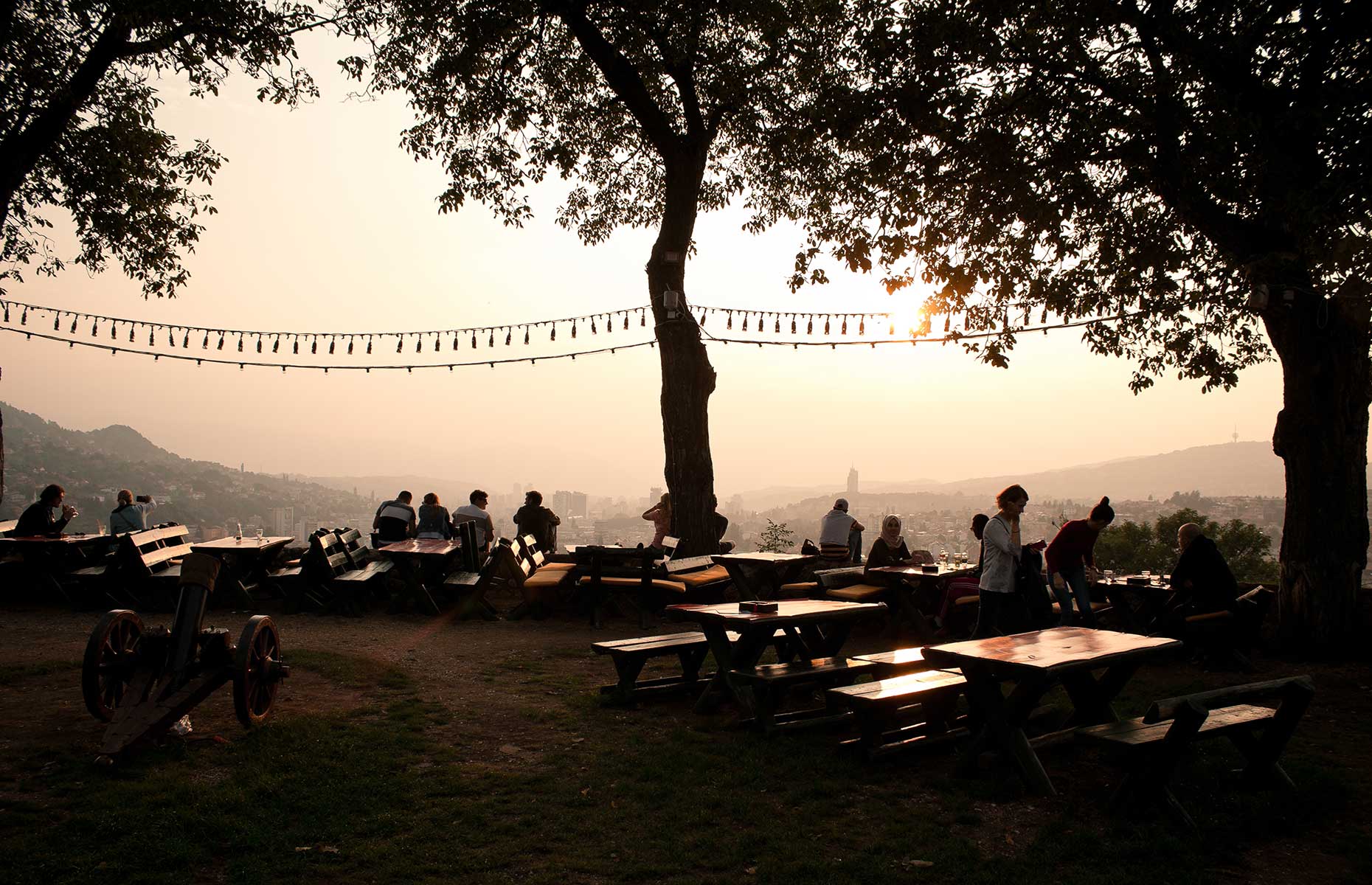 The view is particularly enchanting just before dusk – the city blushes as the day fades. Time it right and you’ll see the minarets light up and hear the call to prayer effervesce up from the city.

Several mountains cast their shadows on the city of Sarajevo. While Trebević is not the tallest, it’s the most famous because it was used for a number of events, including the bobsleigh during the 1984 Winter Olympics. The bobsleigh track was broken into pieces by bombs during the Bosnian War, but those pieces have since been put back together like a jigsaw to form a walkway that takes you from the top of the mountain to the base, through the trees.

Over the years the track has become an unlikely art gallery. Long stretches of the sides of the track are now emblazoned with murals and tags by street artists from around the world. The best way to experience Trebević is to take the cable car to the top and walk back down. 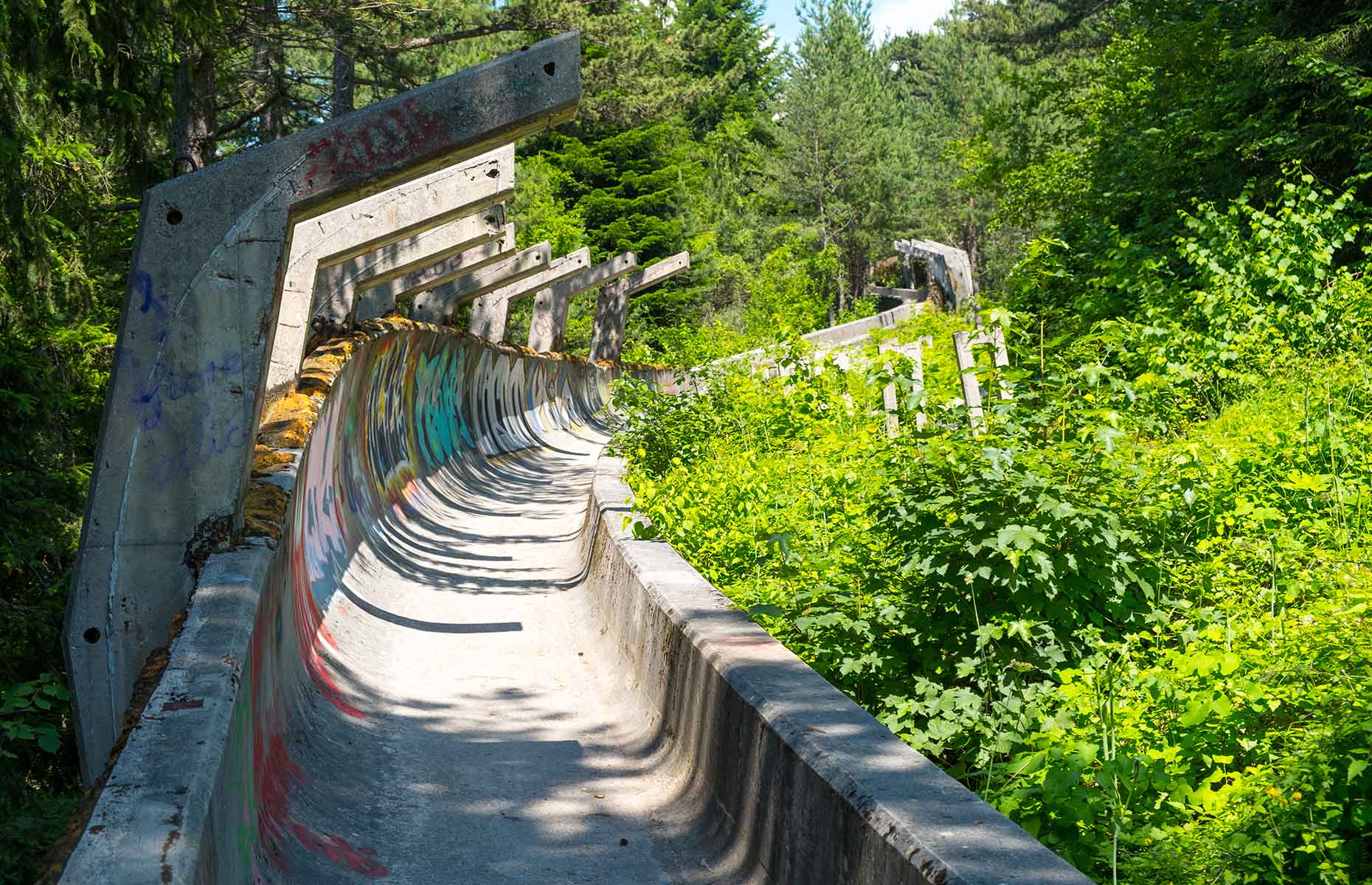 This chiselled stone plaque on the corner of Zelenih Beretki and Obala Kulina Bana marks the spot where the course of history turned on a tac in June 1914. Archduke Franz Ferdinand and his wife Sofia were shot here, the catalyst for the First World War. Sometimes there’s a replica of Franz Ferdinand’s car stationed here. Belonging to the Sarajevo Museum 1878 – 1918, it usually offers city tours themed around the assassination.

READ MORE: A weekend in Salzburg

Out of the city centre

During the Bosnian War, the Tunnel of Hope acted as Sarajevo’s lifeline. It was secretly dug out of the ground underneath Sarajevo Airport during the Siege of Sarajevo, allowing food, war supplies and humanitarian aid into the otherwise completely cut-off city. 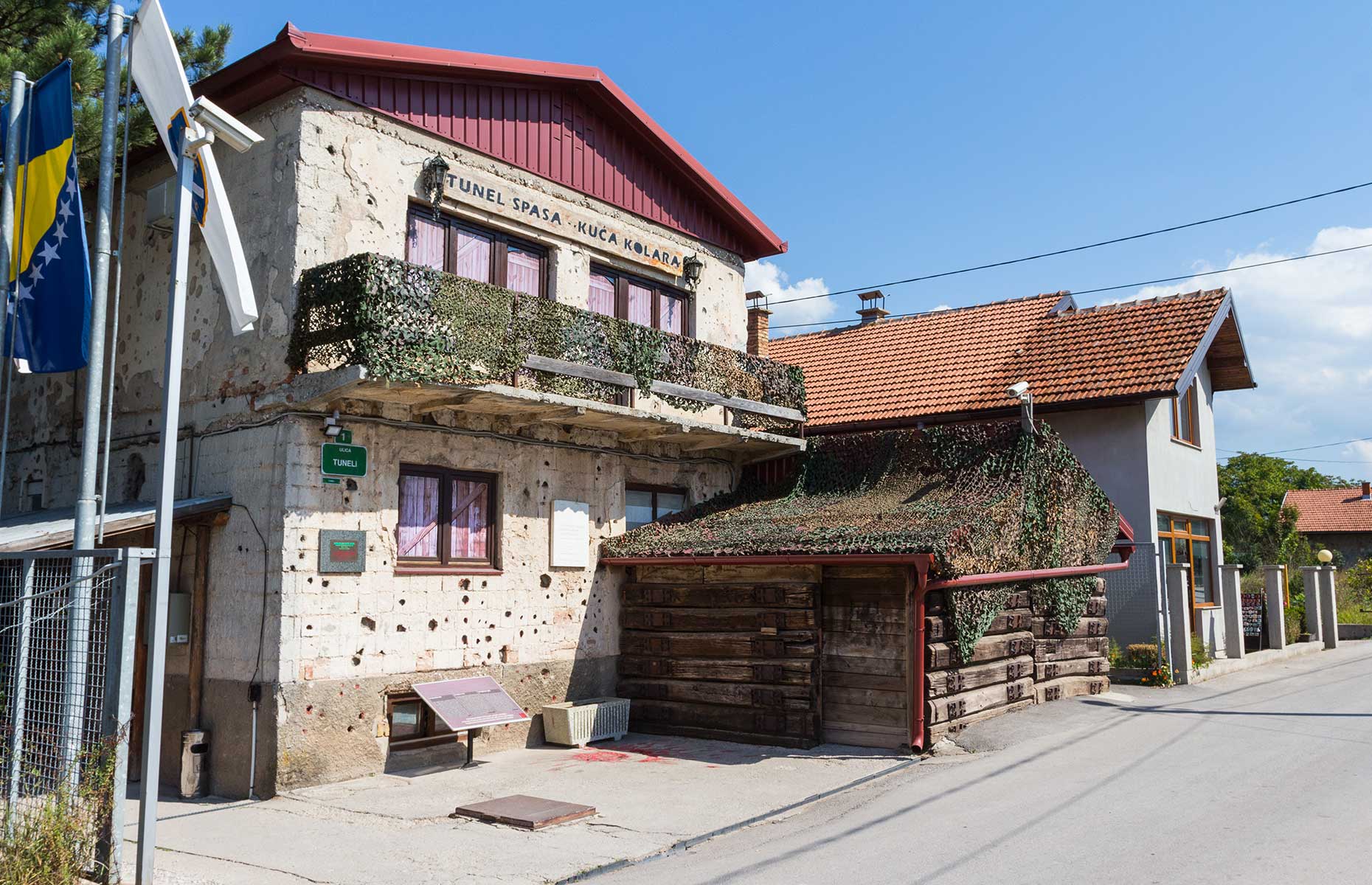 Located around an hour away from Sarajevo city centre, the house, whose cellar served as the entrance to the tunnel, is now a museum where you can find out all about the history of the siege and how the citizens of Sarajevo survived it. You can also walk down a short length of the original tunnel, which is barely wider than a rabbit’s hutch, to get a feel for the arduous journey that 3,000 Bosnian soldiers and locals made every day during the siege.

The journey to Mostar takes two hours and if you don’t want to drive yourself there are plenty of tour companies that run guided sightseeing trips from Sarajevo.

Mostar has looks worthy of the widescreen. The city spills down two leafy hillsides on each side of the Neretva River. On both sides, the cobbled alleyways are lined with shuttered-windowed gift and craft shops, artists’ studios, cafés and restaurants. Take cash to buy embroidered bookmarks, handmade jewellery and local art from the street side stalls. 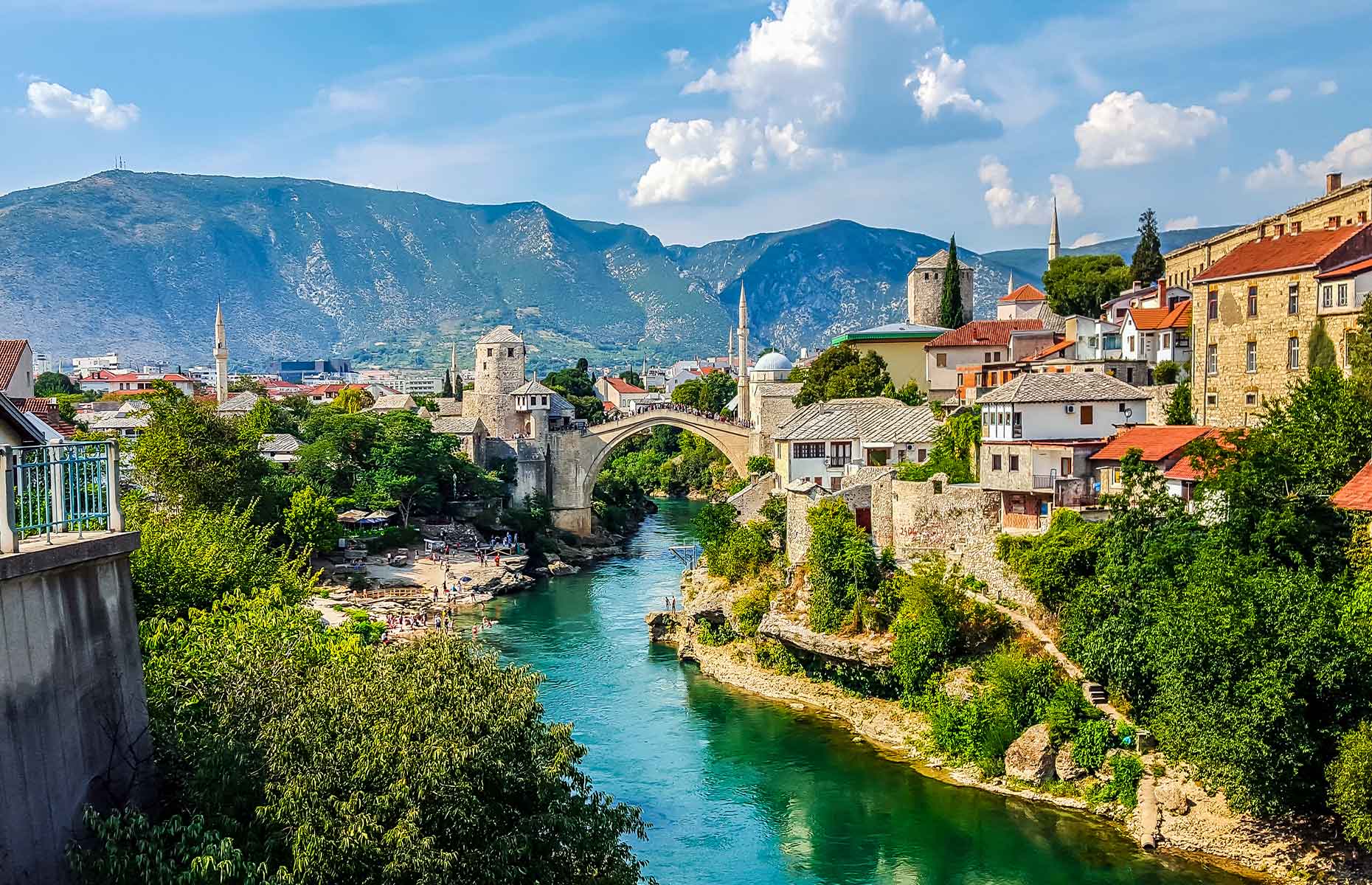 The focal point of the town is its rainbow-shaped bridge – and not just because of its photogenic architecture. Locals can typically often be found here practicing for the annual bridge diving competition which sees them jump – without a bungee cord – from the top of the structure (with a height of 78ft 9in/24m) into the dangerous waters below.

Just so you know, some locals just hang around on top of the bridge posing in speedos hoping that tourists will donate some money to them. The real jumpers turn up in wet suits and throw themselves right off – no countdown needed.

For lunch, head to Restoran Labirint. The view from the terrace of this Mostar restaurant is calendar worthy. The highlight of the menu are the meat sharing platters. You’ll need the appetite of a T-Rex to get through the Platter Lambirint, which comes with 15 cevapi, six sausages, two veal cutlets, two chicken skewers, French fries, grilled vegetables and a creamy dip. 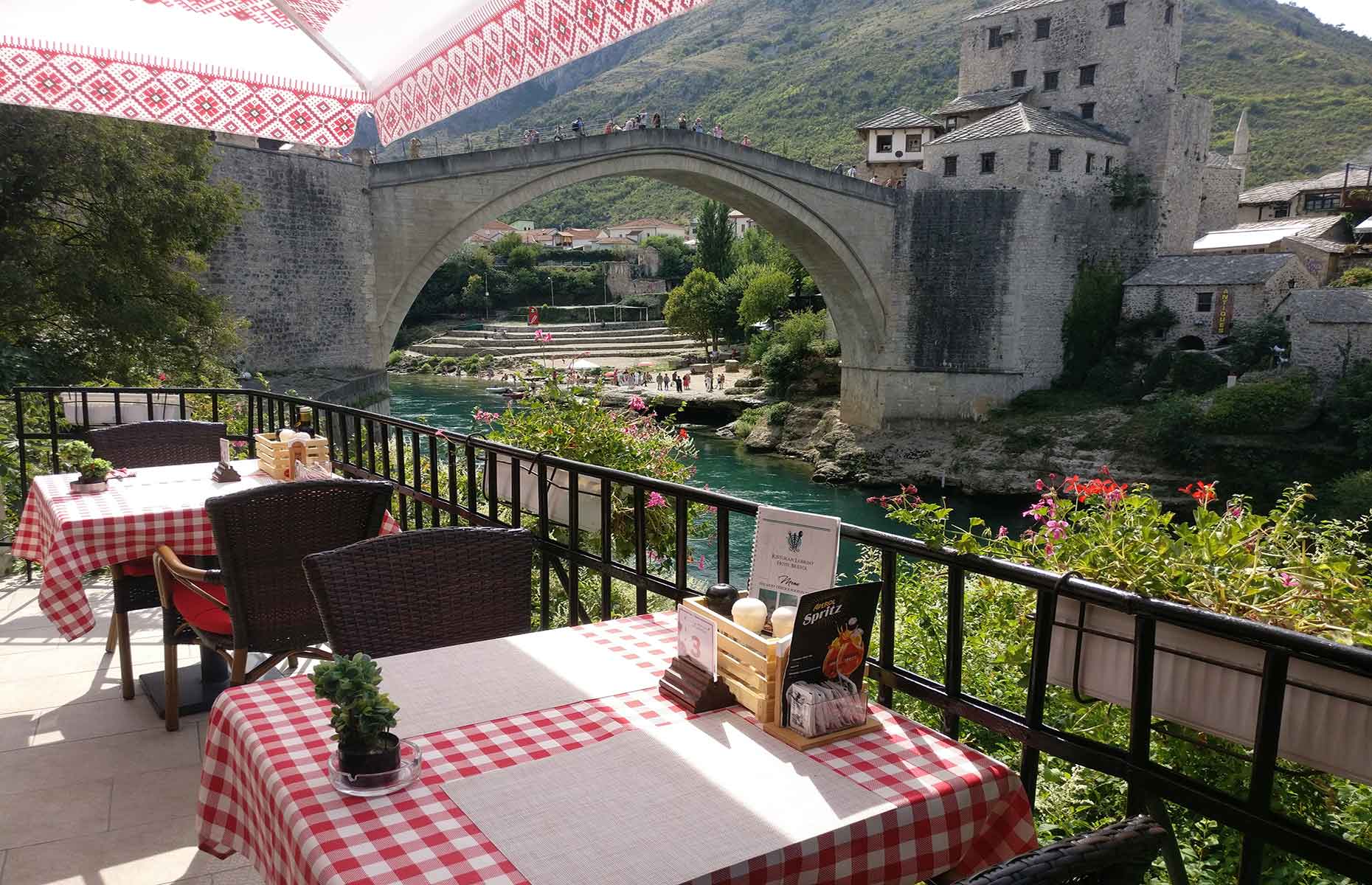 Sarajevo is a fairly compact city so, wherever you stay, you’ll never be more than a short taxi journey away from the main sights. But ideally, you’ll want to base yourself in the Old Town so you’re close to the cafés, restaurants, shops and nightlife. Despite being in the most sought-after part of the city, hotels here are affordable – you can get a nice room with breakfast in peak season for between £40 and £70 a night.

Hotel Old Town is just a two-minute walk from the Meeting of Cultures line. You can see the minaret of the Gazi Husrev-beg mosque from the windows of some of the rooms. In addition to offering double and triple rooms, this place offers single rooms, making it a good choice for solo travellers.

A four-minute walk from the Meeting of Cultures line, Hotel President offers river views from some of its rooms. Upgrade to a balcony suite and you’ll get widespan views of the river and the mountains beyond. 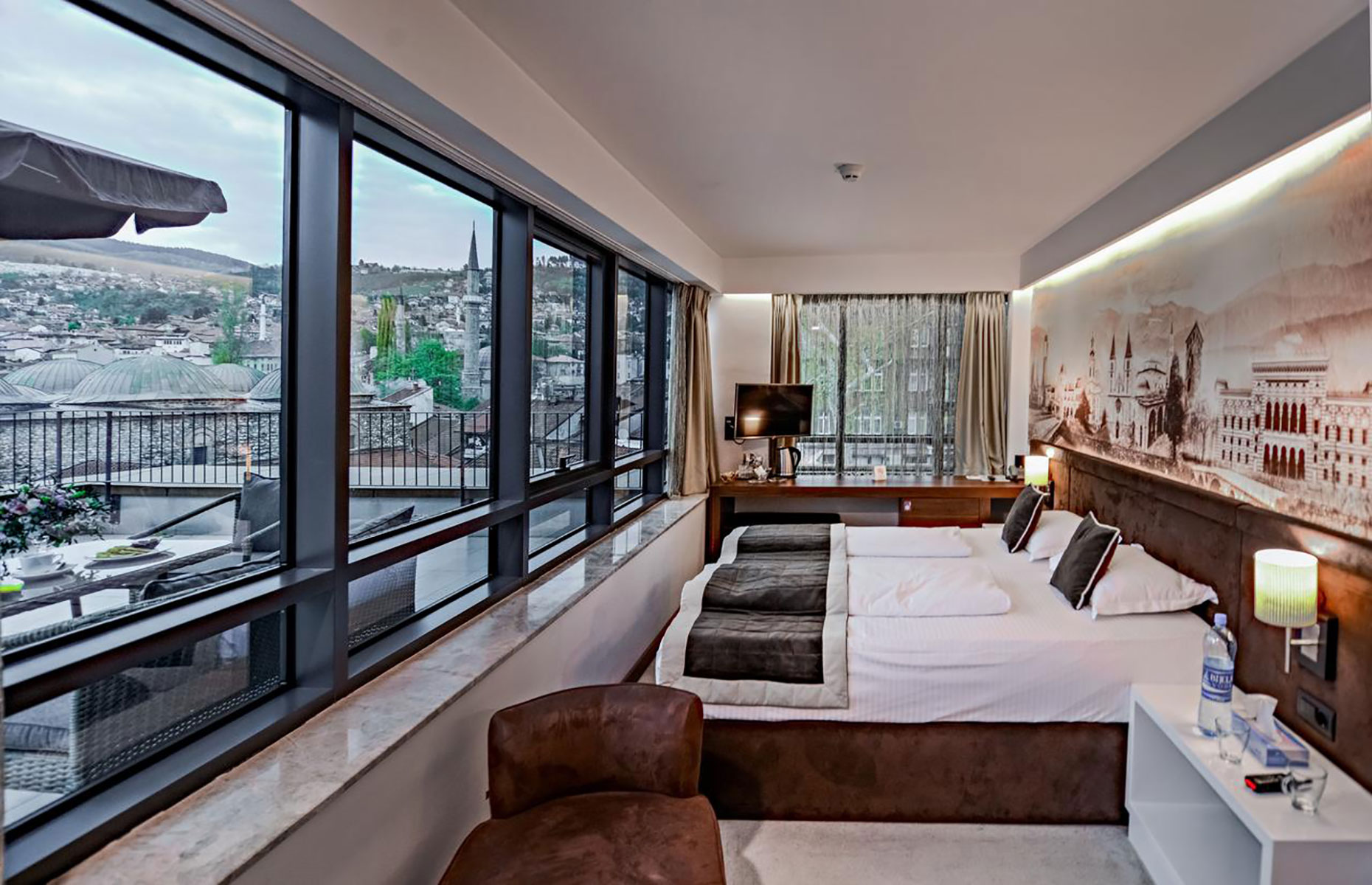 What and where to eat in Sarajevo

Spending time over food and drink is a crux of Sarajevan culture. Traditional Sarajevan dishes are hearty and served in eyes-bigger-than-belly portions.

There’s lonac – a saucy, slow-cooked beef, pepper and potato stew/soup hybrid. And cevapi – a minced meat and onion kebab, cooked over smouldering coals and served on a pillow of flatbread. There are peka dishes, where chunks of lamb, beef or veal are slow-cooked in a satellite-shaped dish over an open fire. Then there’s burek – a filo pastry dish filled with anything from meat to spinach and cheese. They’re made into huge pinwheels, baked in pans the size of manhole covers and served at the table to share. 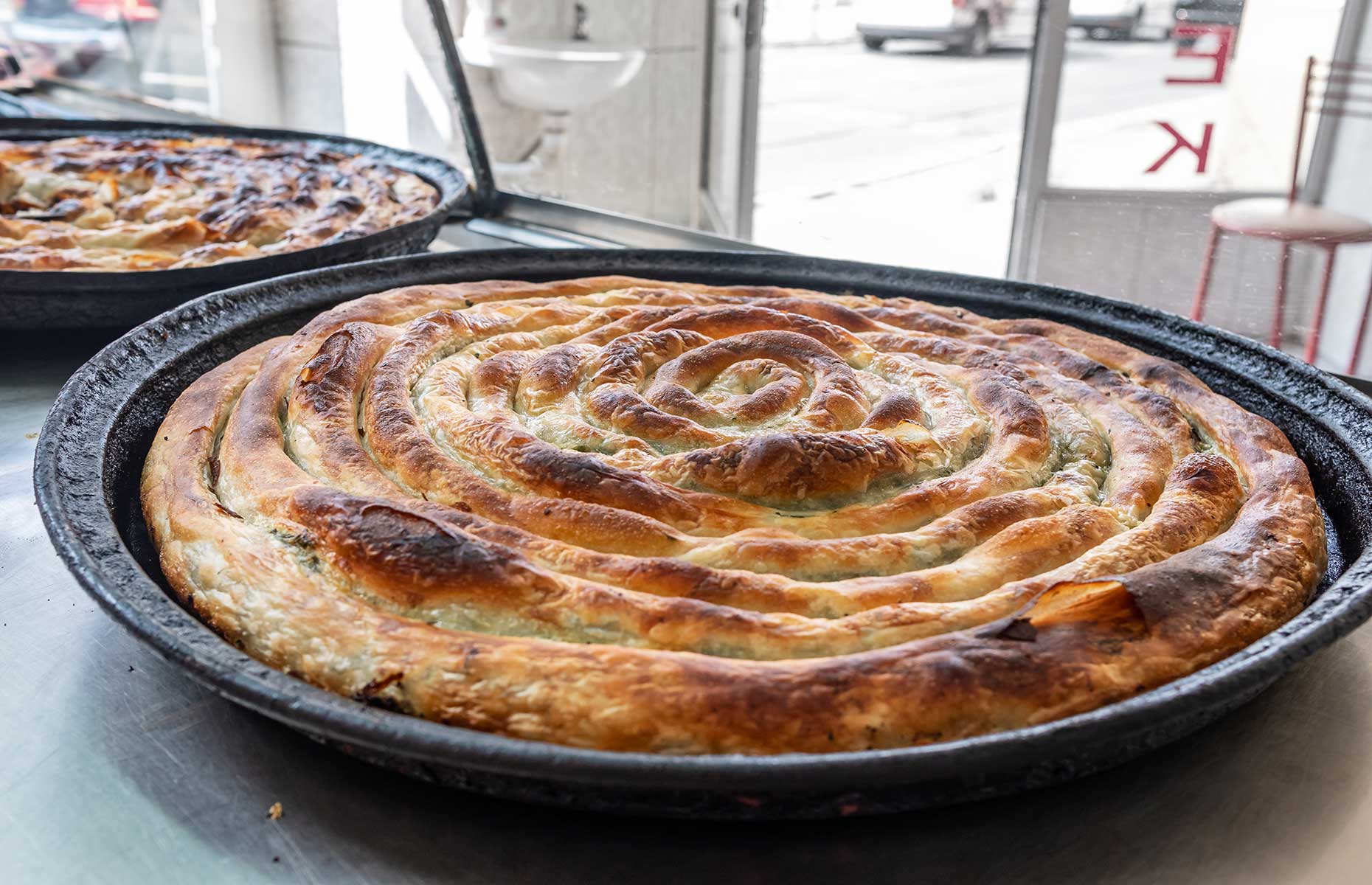 The Old Town and Baščaršija are the best spots to try one of these typical local dishes. No gong is needed to announce the arrival of lunch or dinner time here. You’ll know it’s time to eat when the scent of burning coals and smoking meat starts to plume into the air from the restaurants.

Try Cevabdzinica Zeljo for cevapi – usually packed with locals, it serves three types of kebabs and cevapi is the most popular. Cooked on an open fire in full view of the customers, it comes in three sizes – 100g, 200g and 300g. Ćevabdžinica Hodžić is another great place to try it. 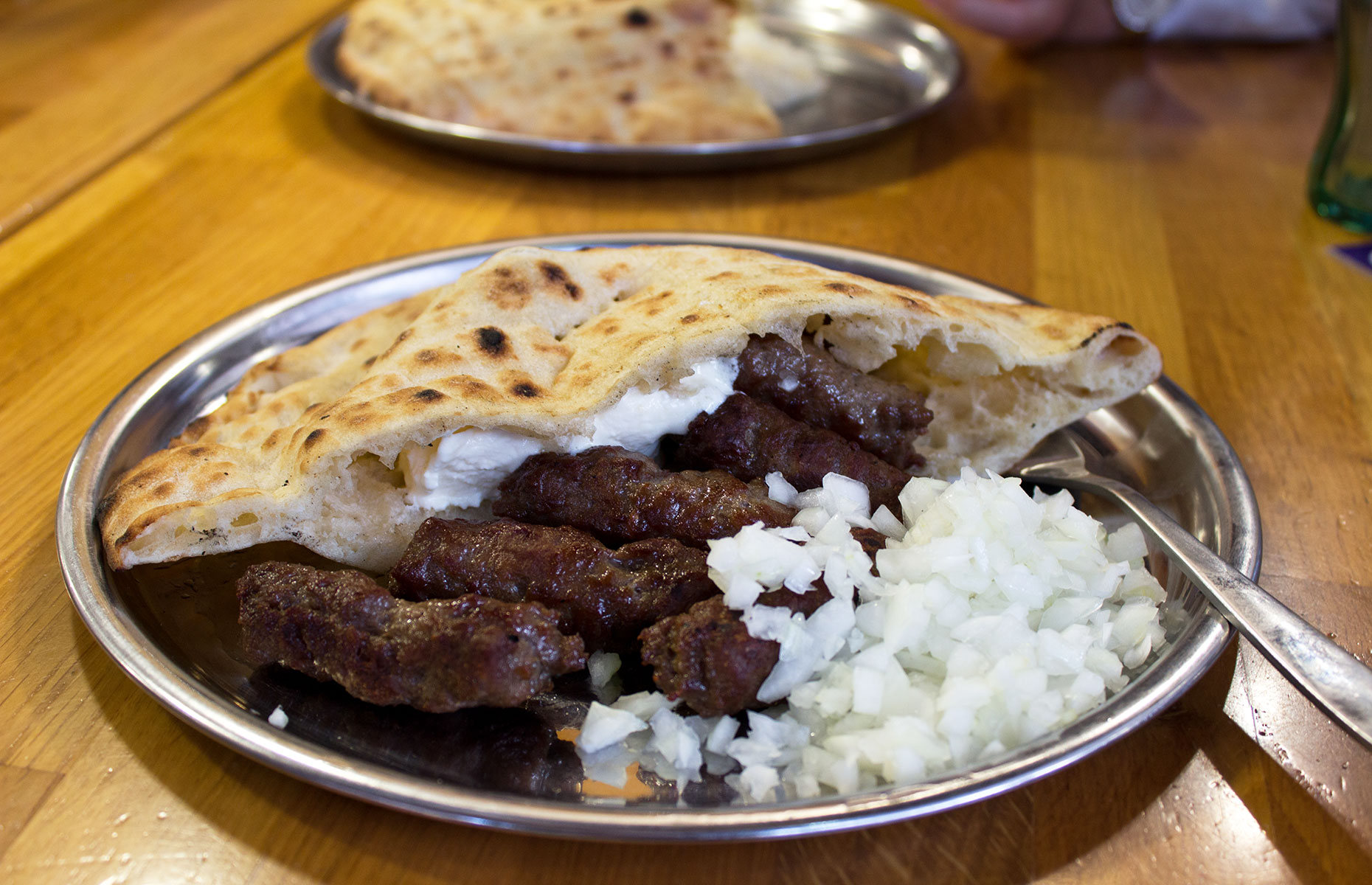 For burek, head to Buregdžinica Oklagija. At this backyard-sized Old Town café, the pastry is made fresh every day. Take your pick from fillings of cheese, spinach, potato, chicken, meat or go for the sweet special of pumpkin when it’s in season.

At Restoran Careva Ćuprija, many of the dishes on the menu are cooked in traditional satellite-shaped peka dishes over glowing coals. Try the lomak too. 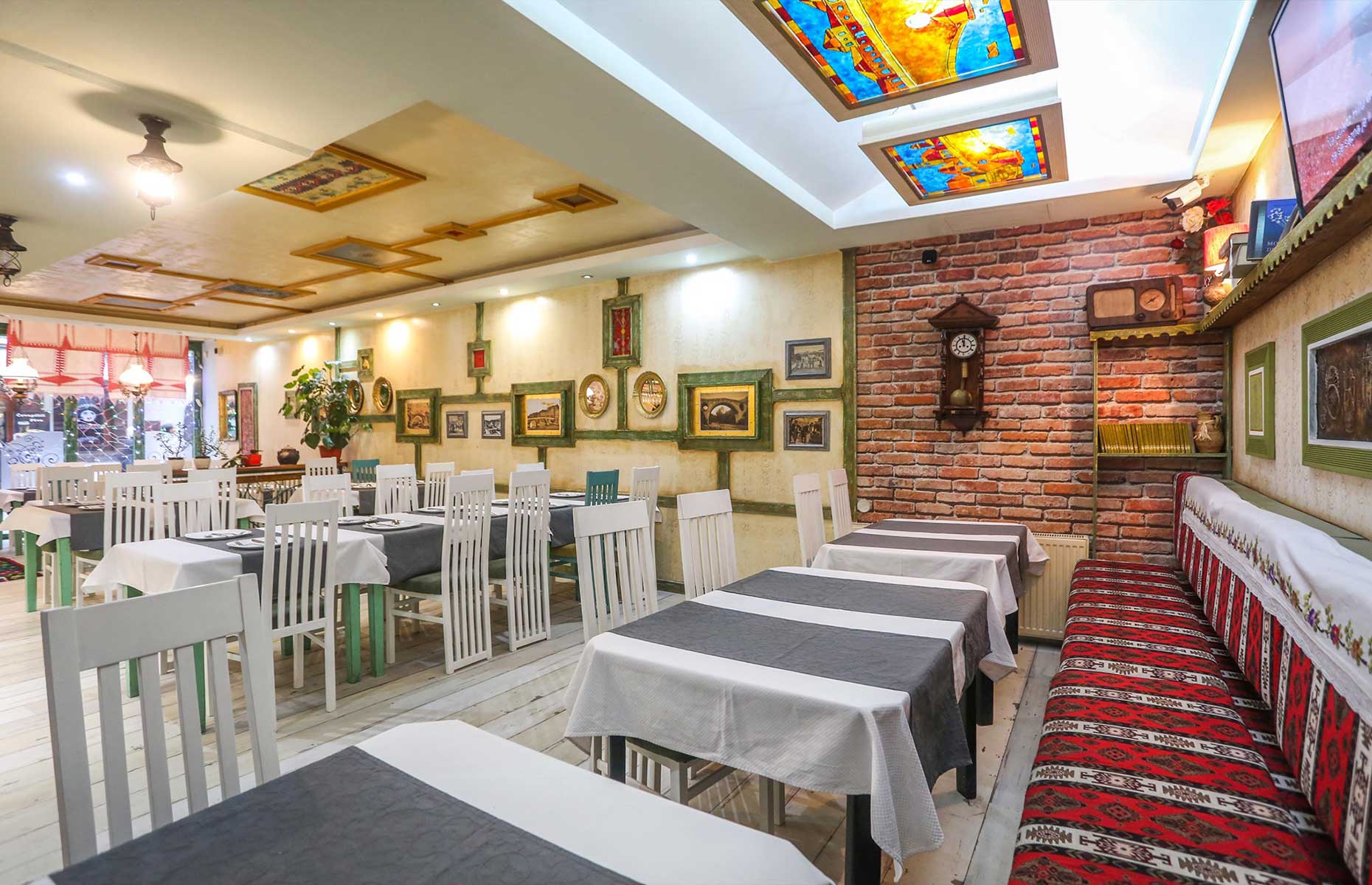 Drinking coffee is also a ritual in Sarajevo. Again, you can’t beat the Old Town and Baščaršija for this. There’s a real ceremony to the serving of Bosnian coffee. It’s served in a copper-plated pot called a džezva and usually brought to the table on an ornate copper tray. It’s got a tarry consistency and it’s rich. Some find it a little too bitter, but that’s nothing a side of sticky baklava can’t remedy. 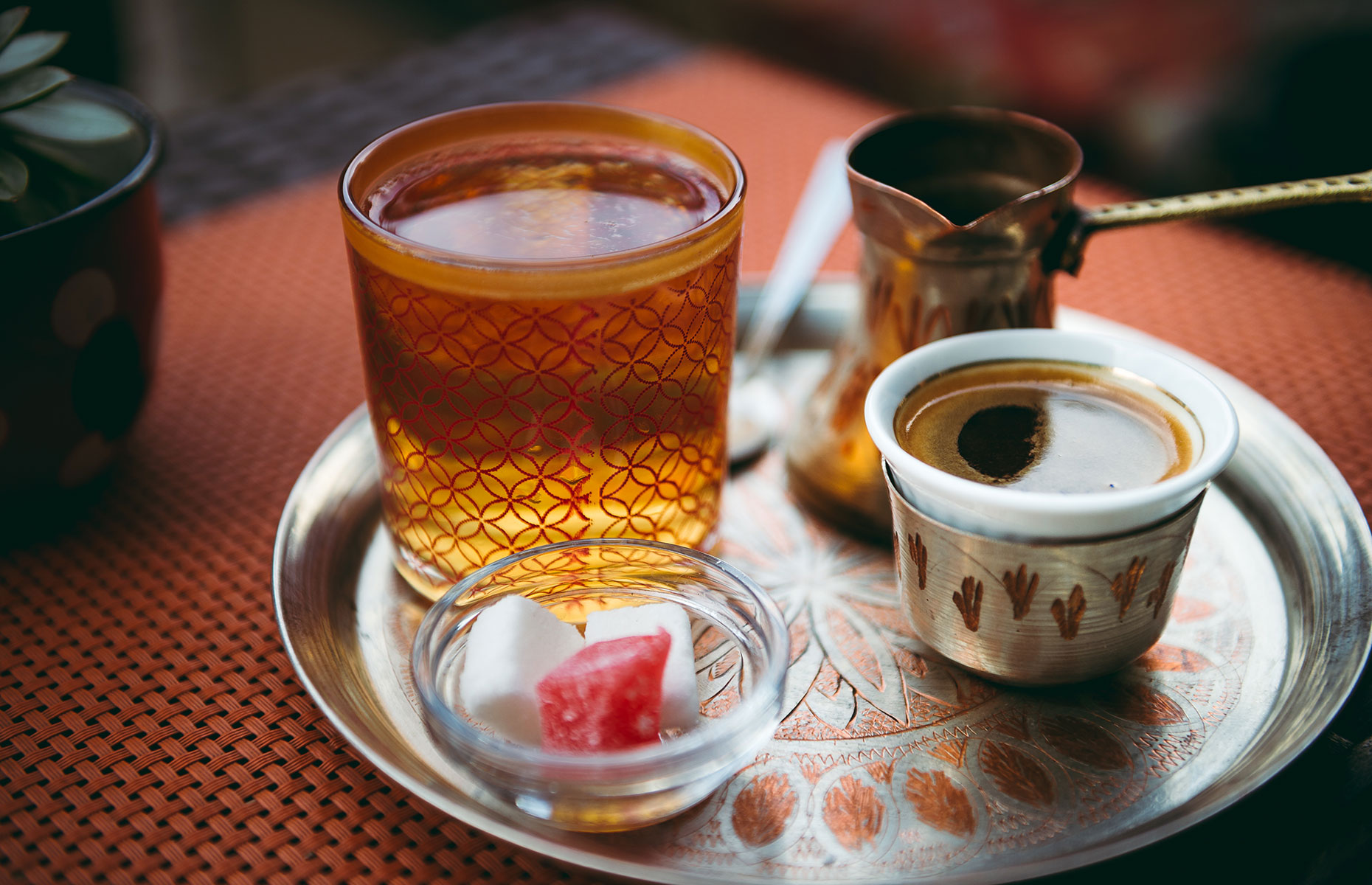 There’s no better place to try it than The Baklava Shop Sarajevo. This café in the centre of the Old Town sells Bosnian coffee and baklava in bitesize portions. Pick and mix from flavours like pistachio, hazelnut, coconut and chocolate. 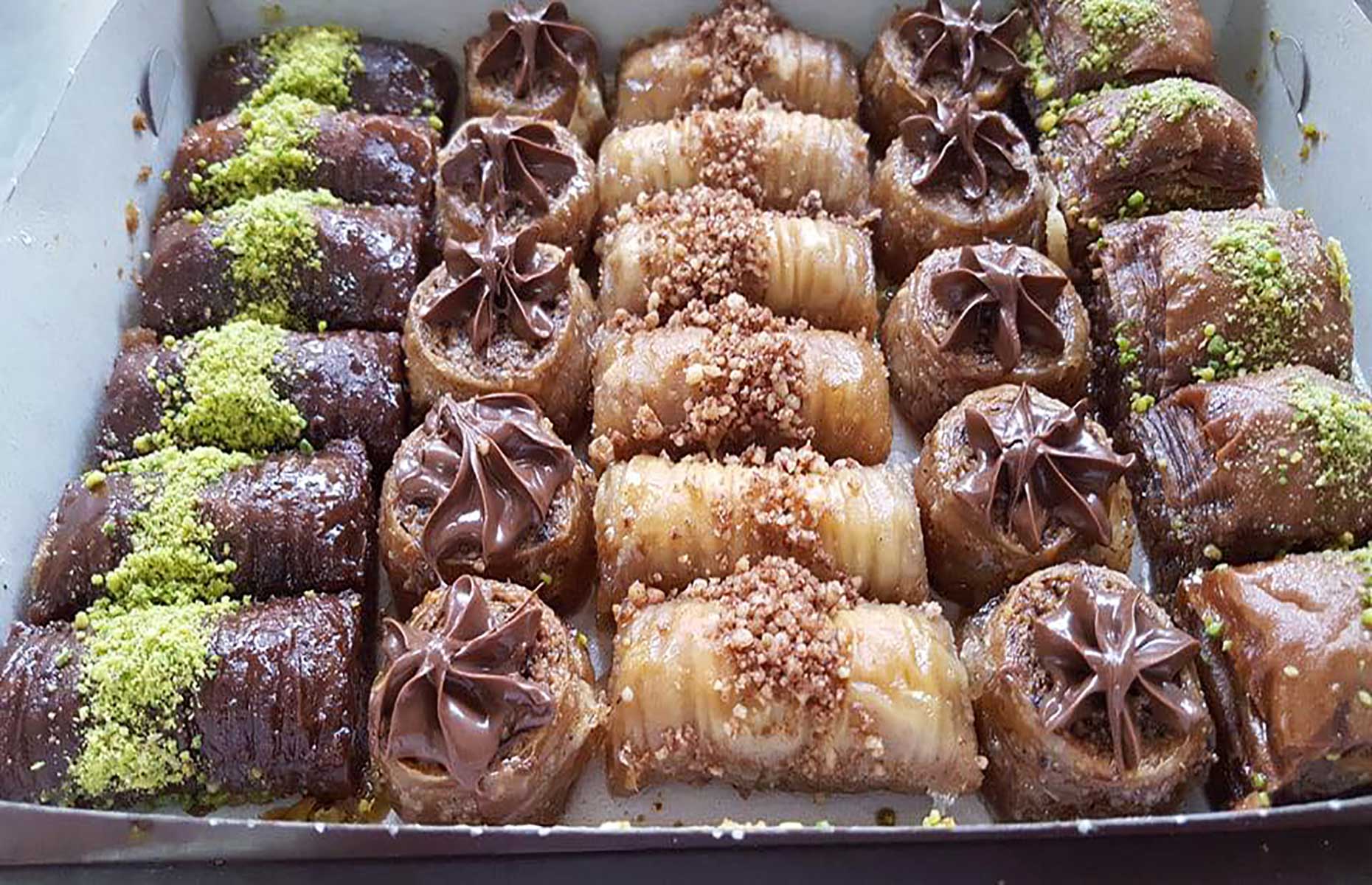 Sarajevo has a serious nocturnal side too. While parts of the Old Town are alcohol-free, there are plenty of bars and brew pubs on the streets nearby that serve everything from wine to cocktails into the red-eye hours. One of the quirkiest places is Zlatna Ribica. It looks more like an antiques shop than a drinking den. It’s decorated with curios like old radios and telephones, cuckoo clocks and other items of historical bric-a-brac.

There are indirect flights with one stopover available from airports around the UK. In light of the ongoing COVID-19 pandemic, check your country and Bosnia's travel restrictions before booking anything or travelling.