The devastating cost of Mother Nature

While water can be stunningly beautiful, it can also be extremely dangerous. Here we take a closer look at some of history's most deadly, dramatic and destructive floods, from 1900 to the present day. 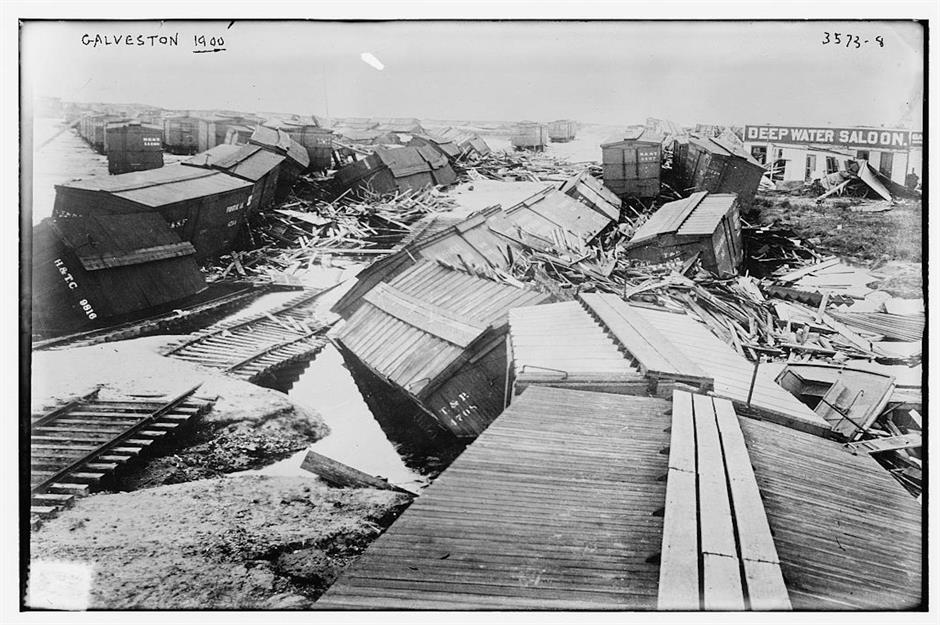 On 8 September 1900 a deadly Category 4 hurricane, with winds estimated to be up to 145mph, tore through Galveston, Texas. The hurricane triggered severe flooding, with a huge wave inundating the coastal city, leaving it under around 12 feet (3.6m) of water. 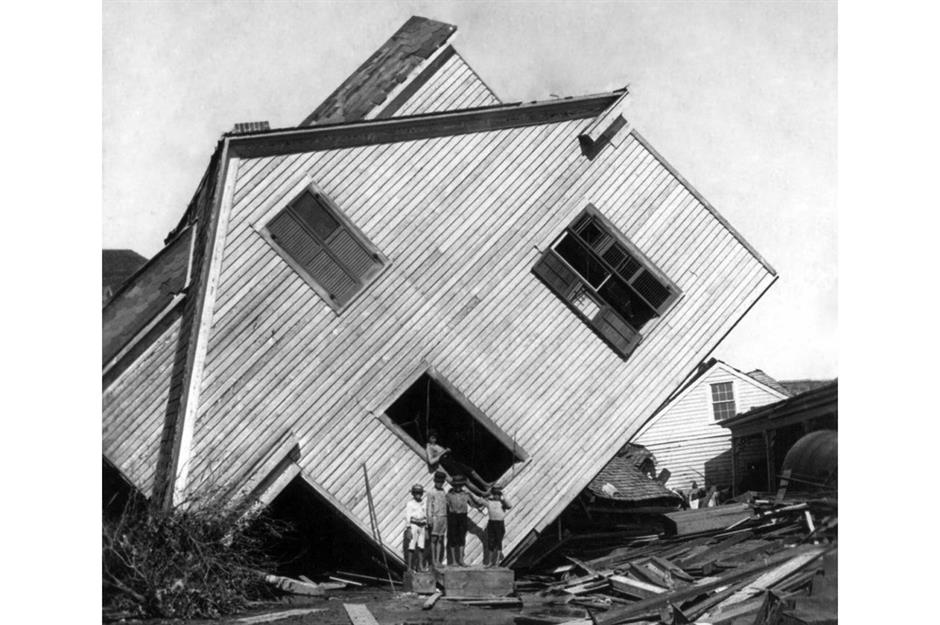 Public domain/via Wikimedia Commons
While the death toll was reported at the time as being between 6,000 and 12,000, the exact number of lives lost remains unknown, However, it's believed to be the worst natural disaster in US history. Residents were caught unawares as US meteorologists had underestimated warnings from Cuba about the incoming storm and its direction. More than 3,600 houses were destroyed in Galveston. This image shows a titled house on the city's Avenue N, affected by both the flooding and high winds.

After experiencing unusually heavy downpours during the winter of 1909-1910, the Seine river rose dangerously high on 21 January 1910, causing catastrophic levels of water to surge through the French capital. The powerful water overflowed the city's metro tunnels and sewers which seeped into people's basements, causing widespread damage. 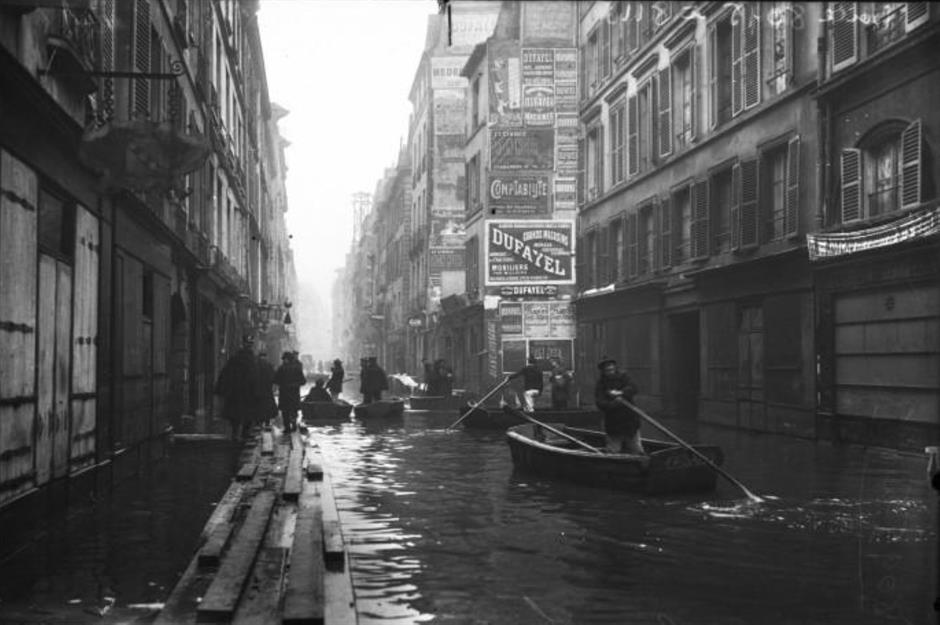 The destructive floods forced people to travel through the city by boats or temporary wooden walkways above the water. Despite the disaster swamping the city for 35 days and causing over 400 million francs of damage (around $1.1bn/€1bn/£857m at today's value) no lives were lost. 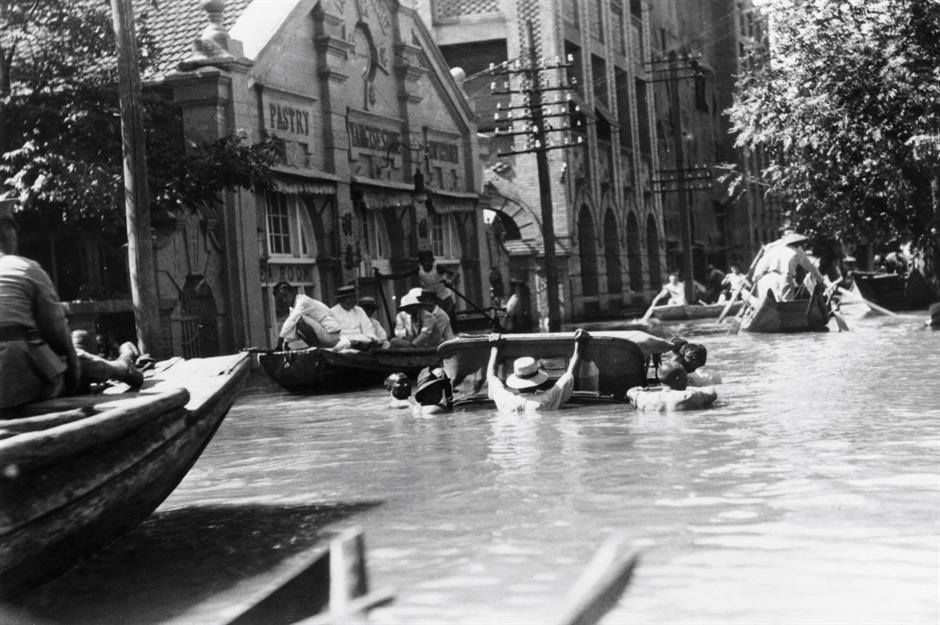 From July 1931, China experienced what was one of the most lethal natural disasters in modern history when a series of devastating floods submerged the centre of the country. A combination of severe rainfall throughout the earlier months and numerous cyclones that hit the region earlier that year triggered the lower basins of the Yangtze (the longest river in China) and Huai River to burst. 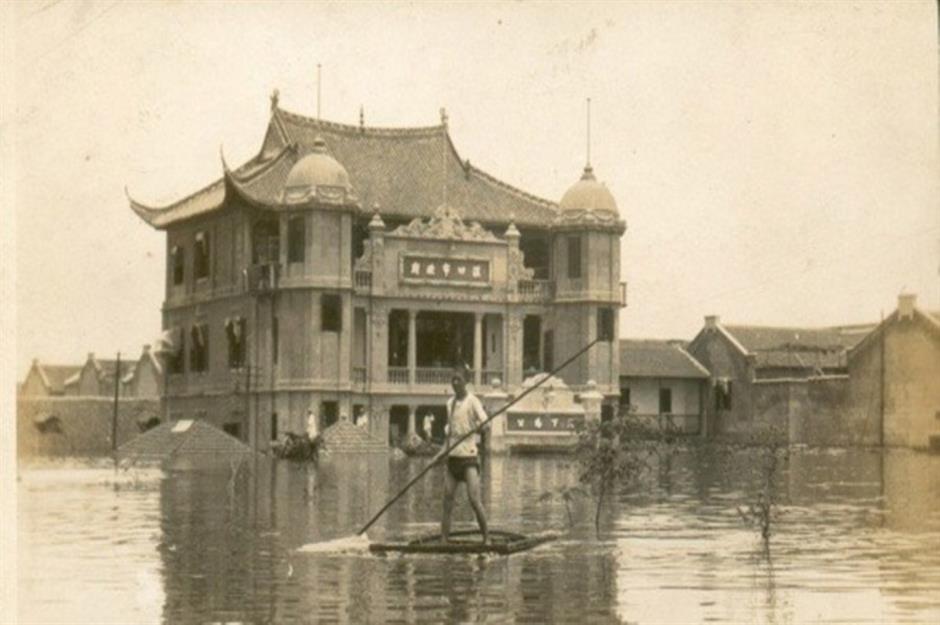 Around 52 million people were affected by the deadly waters which smothered an area roughly the size of England and half of Scotland. The horrific death toll was incalculable – estimates ranged between 400,000 to 4 million people from flood-related deaths, as well as the widespread famine and disease outbreaks, including cholera and typhus that occurred in the aftermath.

The North Sea’s worst storm on record surged through Europe on 31 January 1953. In the Netherlands the waters ploughed through 400,000 acres (162,000 hectares) of land and killed at least 1,800 people. The sea in eastern England breached protecting walls and flooded 160,000 acres (73,000 hectares), while 133 people lost their lives when the ferry MV Princess Victoria sank in the North Channel. 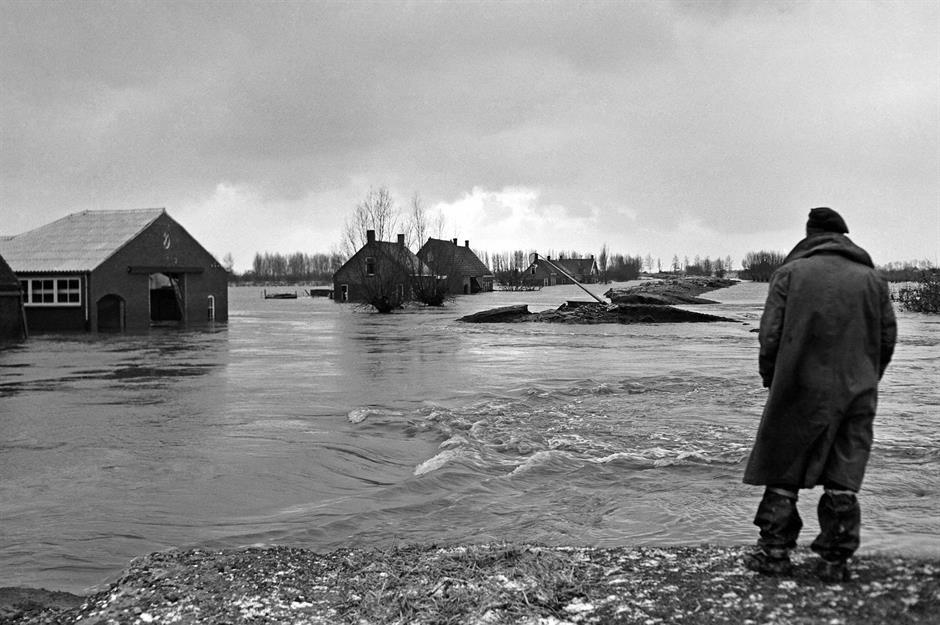 According to the UK Environment Agency 307 people died in southeastern England and 24,000 homes were destroyed. The county of Essex was especially hard hit losing 58 people at Canvey Island and 35 from the village of Jaywick alone. It was Britain's worst natural disaster of the 20th century. 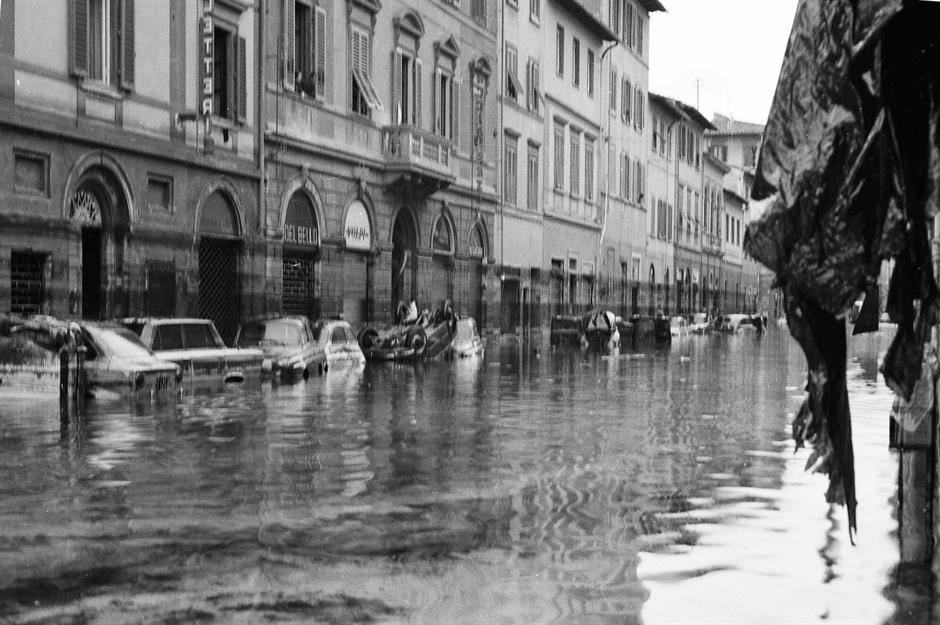 On 4 November 1966, following heavy rainfall, the banks of the Arno river dramatically swelled and water flooded through Florence’s city centre. The floodwaters submerged the streets and overflowed sewers, carrying waste and debris through one of Italy's most important historic cities. 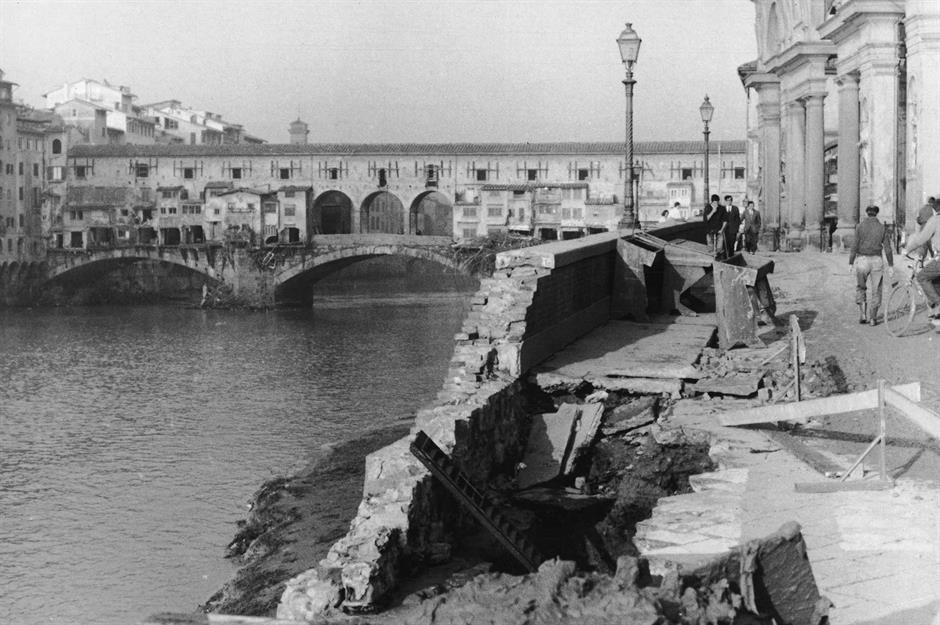 The powerful flooding, which in some areas was as high as 22 feet (6.7m) killed at least 35 people and severely damaged buildings and homes, leaving thousands without power. Treasured artworks and manuscripts from the basement of the Uffizi Gallery were badly water-damaged, so residents and tourists took to the flooded streets to help salvage the priceless pieces. 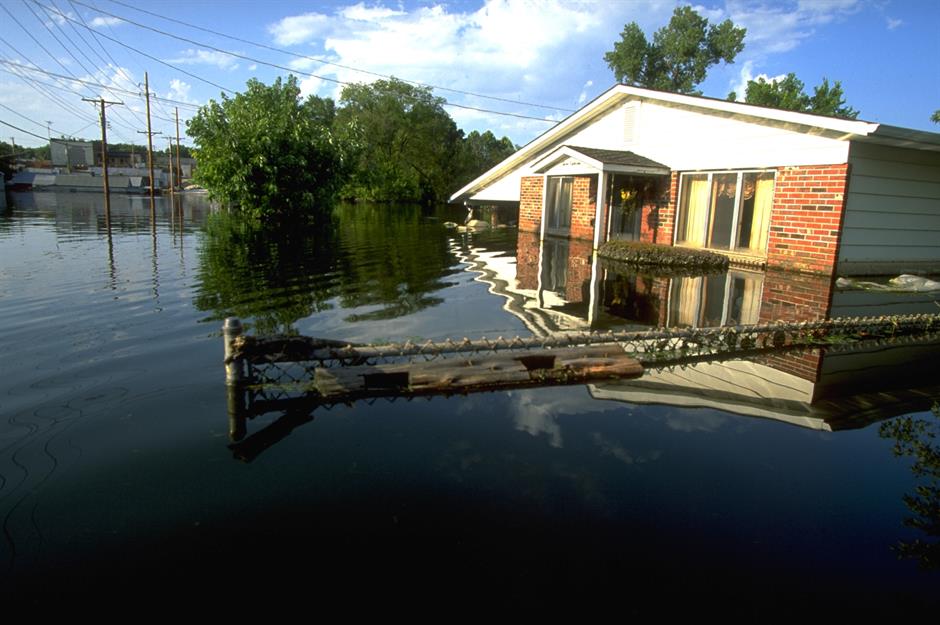 During the summer of 1993, the Mississippi River overflowed causing catastrophic damage and destruction across the Midwest. Ongoing storms coupled with an abundance of rain and snow during the previous autumn and winter are believed to have been the root cause. Over 17 million acres of land were flooded over three months with nine states including Illinois, Missouri, Kansas and Wisconsin affected. 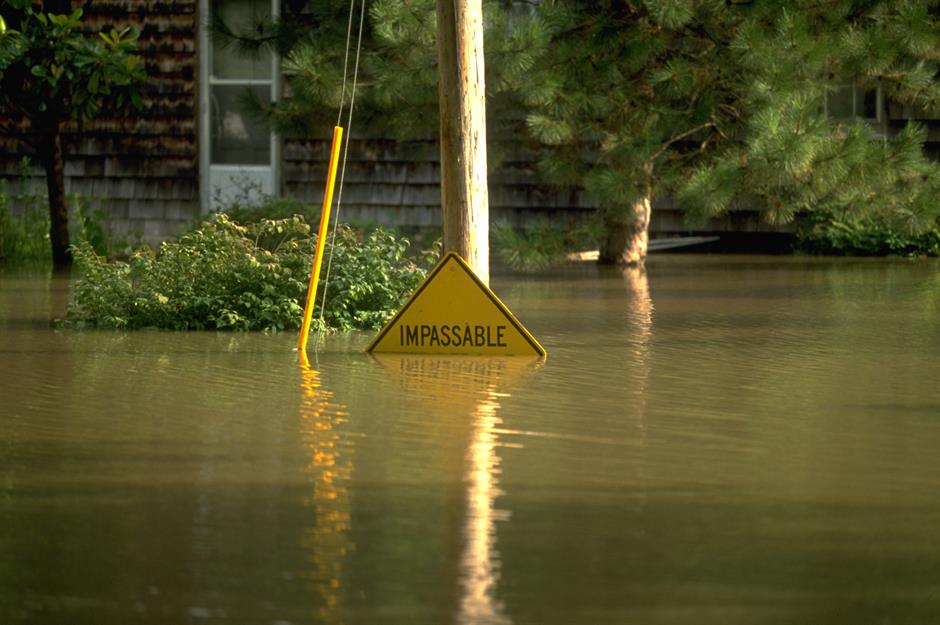 Hundreds of levees along the Missouri and Mississippi rivers failed and burst, forcing thousands across to evacuate. The waters claimed at least 50 lives and destroyed roughly 10,000 homes. Millions of acres of Midwestern farmland were also submerged and remained unusable in the years that followed. The Great Flood was one of the deadliest and most expensive river floods to occur in the US, costing an estimated $15 billion in damages at the time, about $26 billion (£20bn) today. 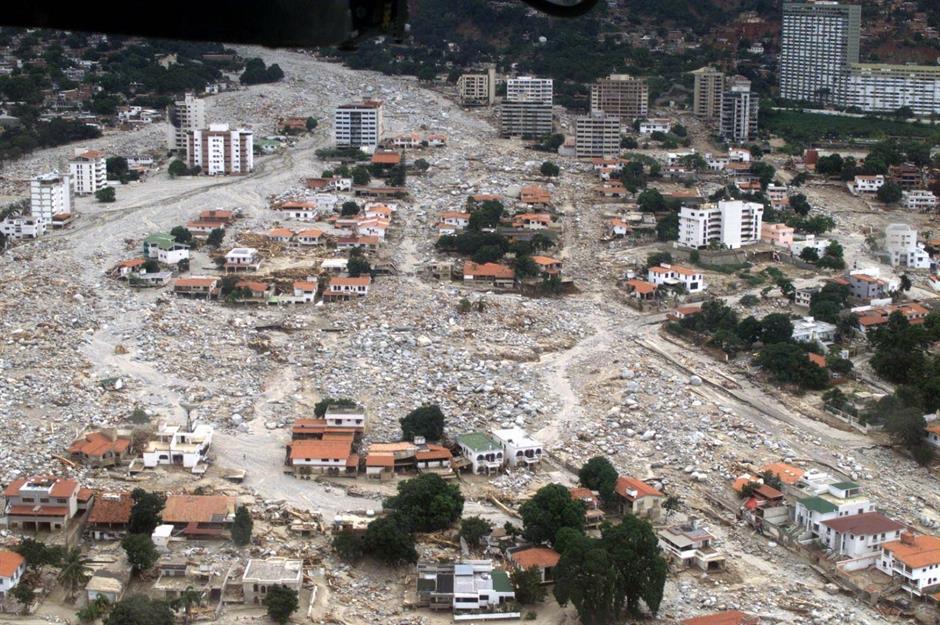 On 14 December 1999, torrential rain triggered flash floods that swept over the coastal area of Vargas State in Venezuela. The flooding sparked deadly mudslides of water, debris and boulders which destroyed the town of Caraballeda, with estimates of the death toll from 10,00 to 30,000 people across the region.

Jaw-dropping images of the world's weather taken from the skies 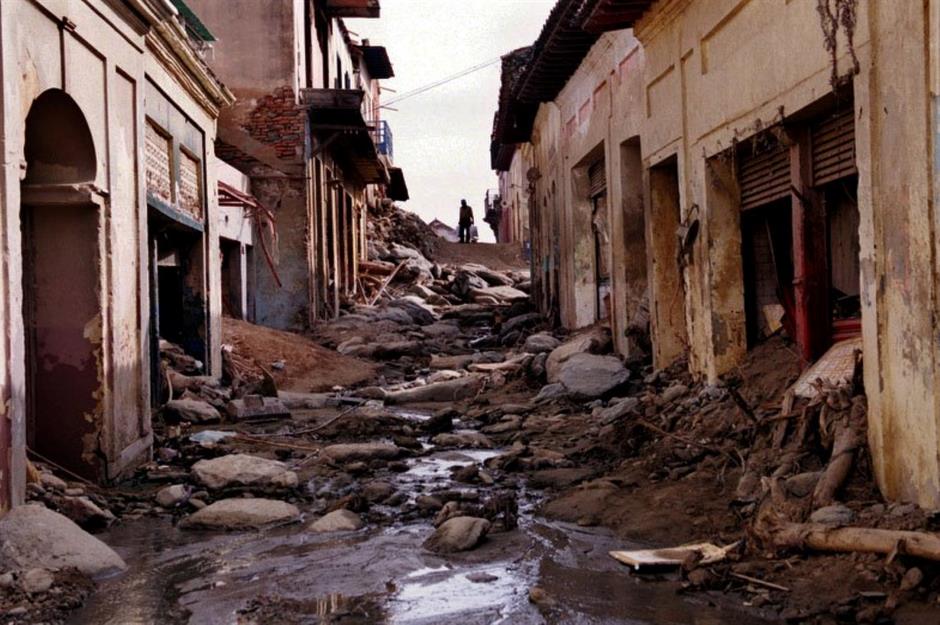 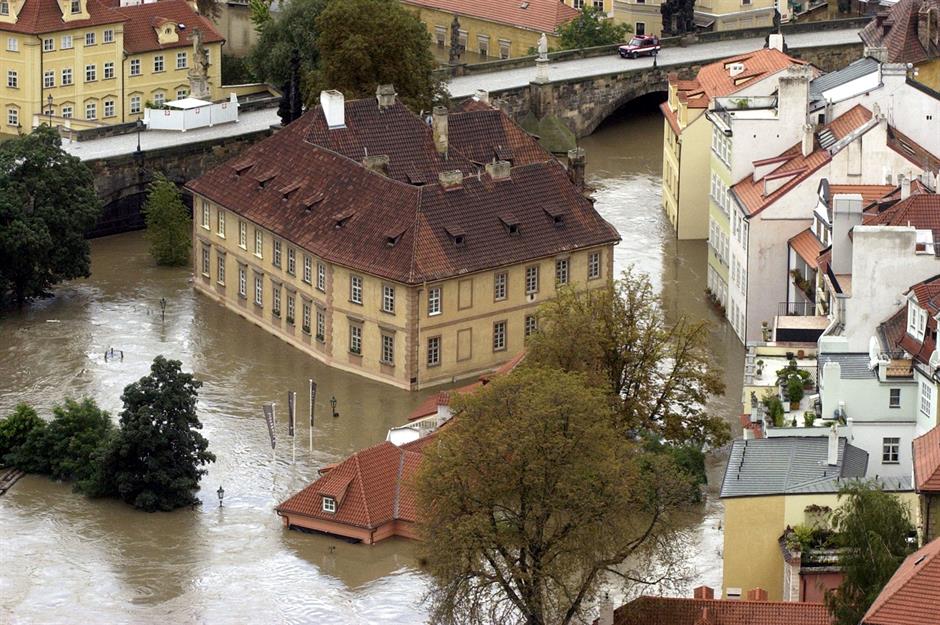 A week of destructive heavy rainfall swept across Europe from 5 August to 13 September 2002. Germany, Austria, the Czech Republic and Russia were among the countries most affected by the floods. The Czech Republic's capital city Prague, pictured here, experienced some of the worst of the damage of all. 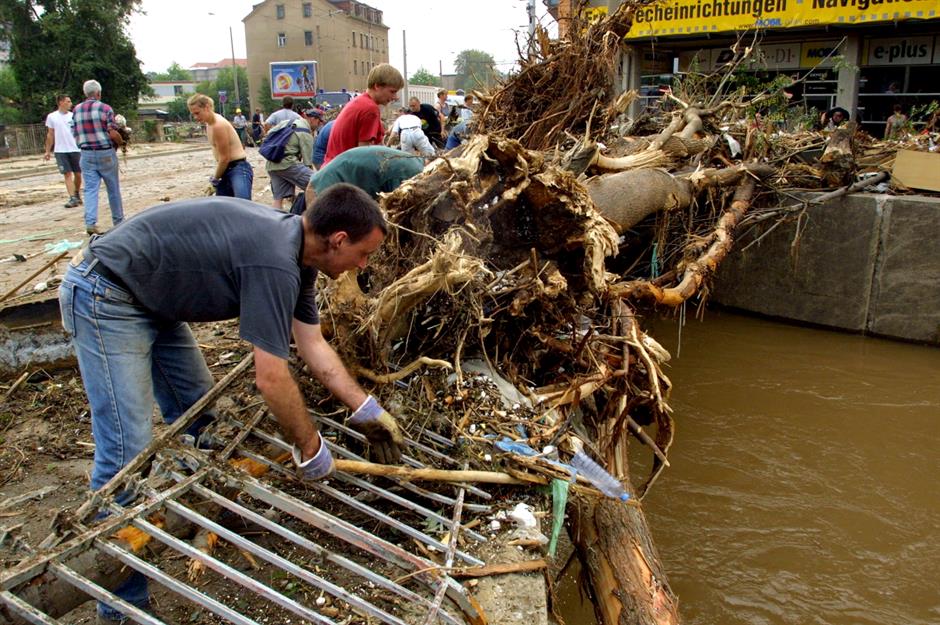 Receding waters from the Vltava river engulfed Prague's buildings and displaced at least 45,000 residents from their homes. The floods claimed 110 lives in total. The cost of water damage throughout the affected countries was estimated to be around €15 billion (£12.8bn) at the time.

The Yangtze River in China swelled again in early May 2010, triggering catastrophic floods. Between June and September, non-stop rainfall after an intense drought caused deadly quantities of water to wreak havoc throughout South and Central China. The floods and the subsequent landslides are likely to have claimed over 1,000 lives, the worst death toll that China had experienced in a decade. 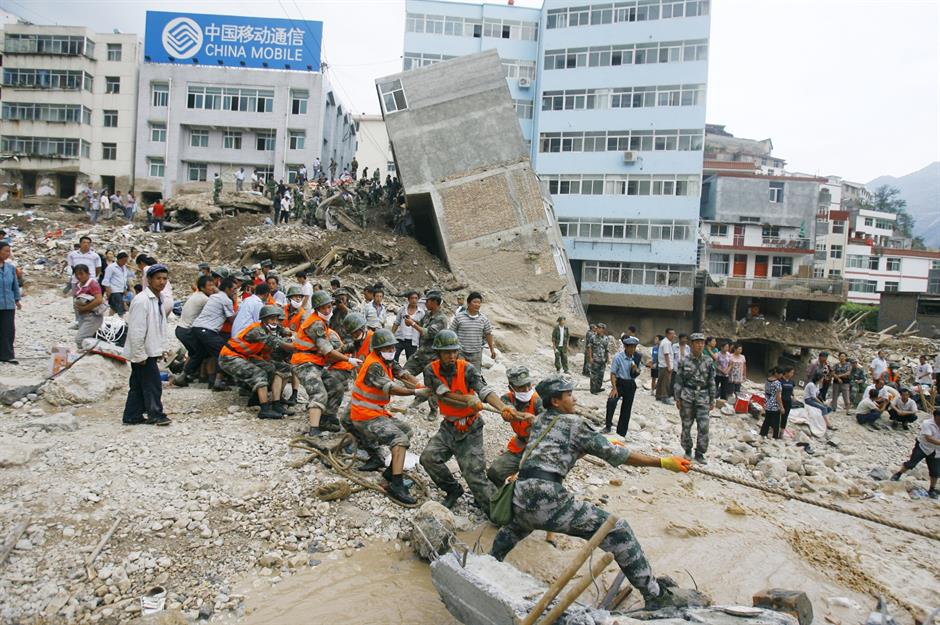 Hundreds of thousands of homes were destroyed thanks to waters that reached a staggering flow rate of up to 70,000 cubic metres per second. It's one of the world's most costly floods, with damages estimated at $31.1 billion (£28.2m) according to figures from 2014. 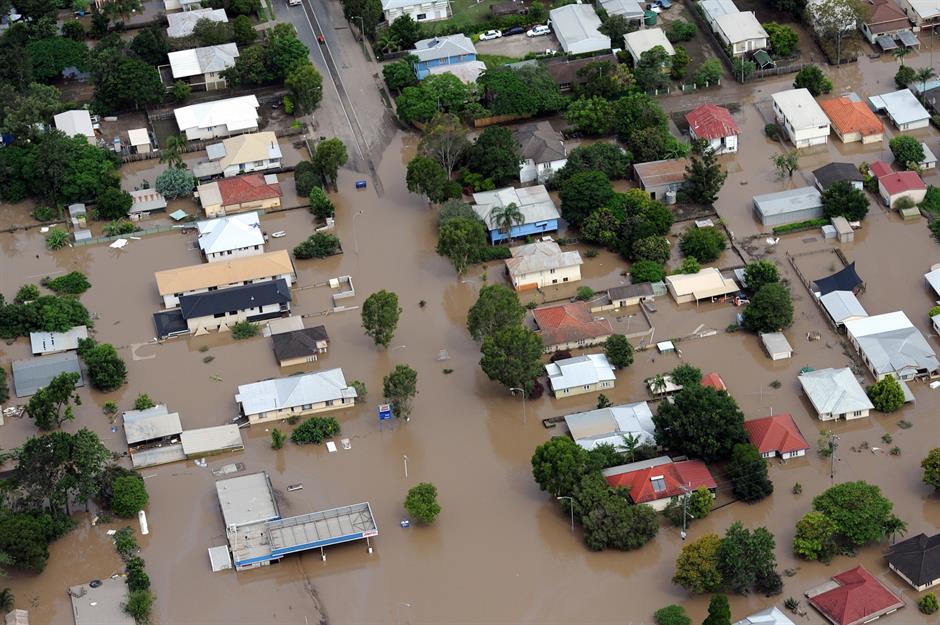 Some of the worst flooding in Australia’s history overwhelmed the state of Queensland at the beginning of November 2010. A combination of unusually heavy rainfall and strong La Niña winds caused extremely high levels of monsoon waters to drench the state. Queensland’s total rainfall from the end of November to the end of December exceeded 12 inches and was in the range of 16 to 24 inches across the majority of the state’s east coast, with some areas seeing record-breaking levels. 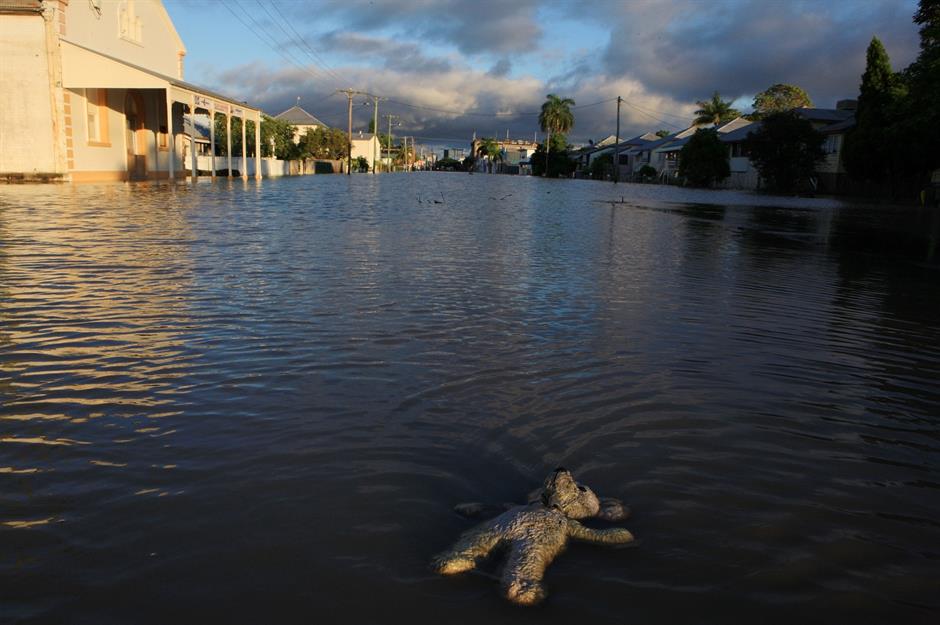 Thousands of people were forced to flee their homes and at least 22 towns were estimated to have been completely inundated by the intense waters. Roughly 200,000 people were affected and 33 were killed by the extreme weather. Around $440 million ($293m USD/£227m) was spent on the recovery effort alone. 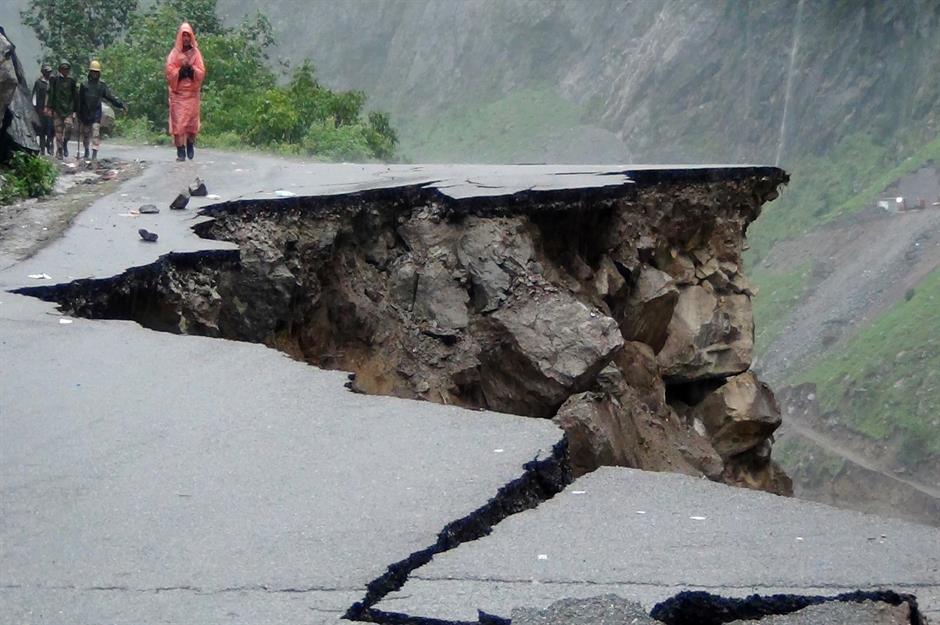 From 16 June 2013, the worst disaster since the 2004 tsunami hit North India and Nepal after heavy monsoon rains triggered both flooding and landslides across the region. Around 5,700 people were reportedly killed and over 60,000 were left stranded as the rainfall swamped cities, washed away cars and blocked roads. Entire villages were completely obliterated by the extreme flash floods and deadly landslides. 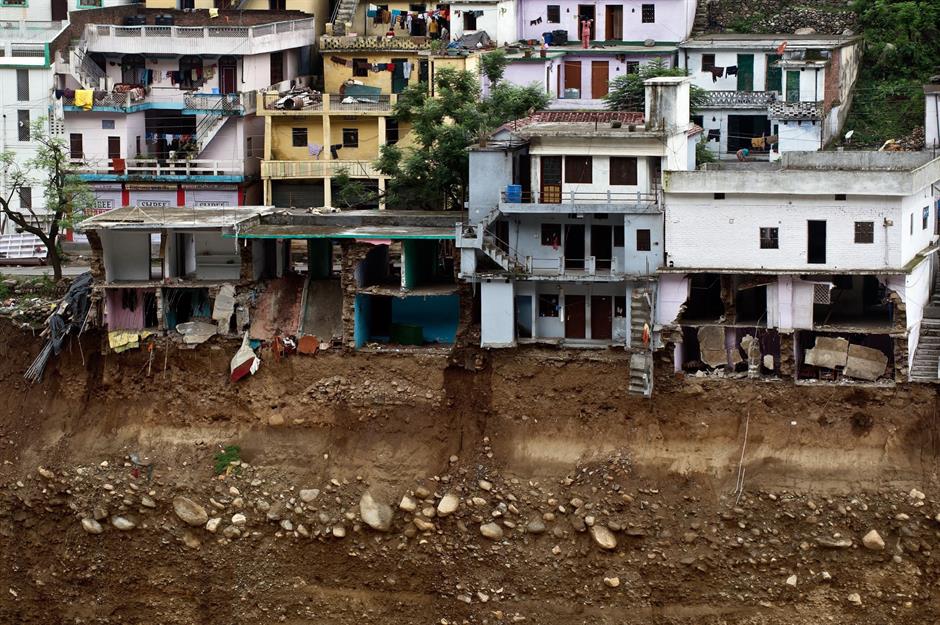 Over 4,000 villages and towns in the state of Uttarakhand were affected and more than 100,000 people were forced to flee from the devastation. Thousands were also declared missing as many were trapped in the nearby valleys awaiting rescue, which were blocked by the landslides. Although the heavy rain lasted just two days, the damage was so catastrophic that it took Uttarakhand years to recover. 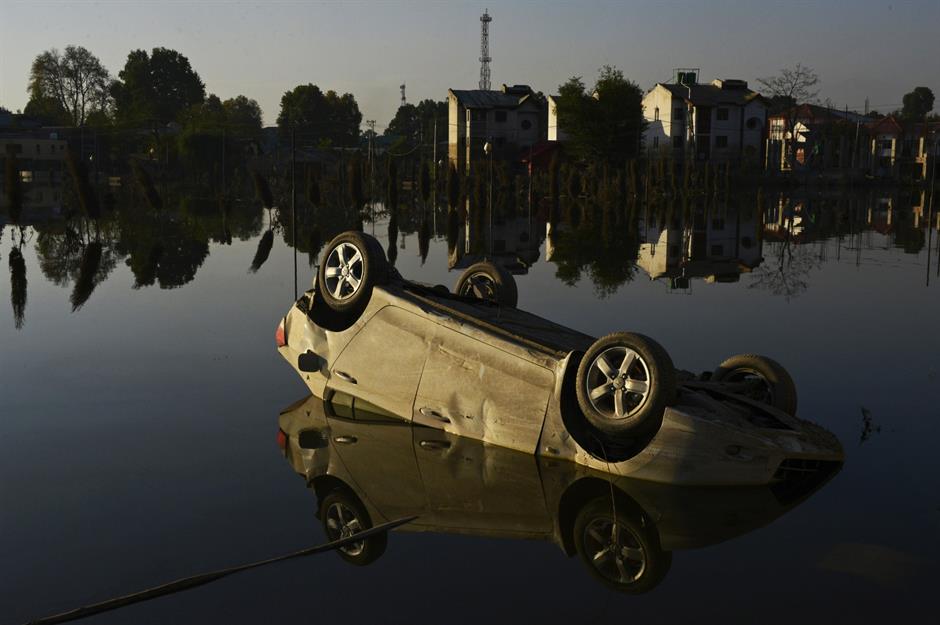 Both Pakistan and India were hit by powerful monsoon rainfall during September 2014. The historic flooding was the worst the region had experienced in 60 years, trapping thousands and killing hundreds in both countries as buildings and roads were swept up and submerged by the powerful currents. 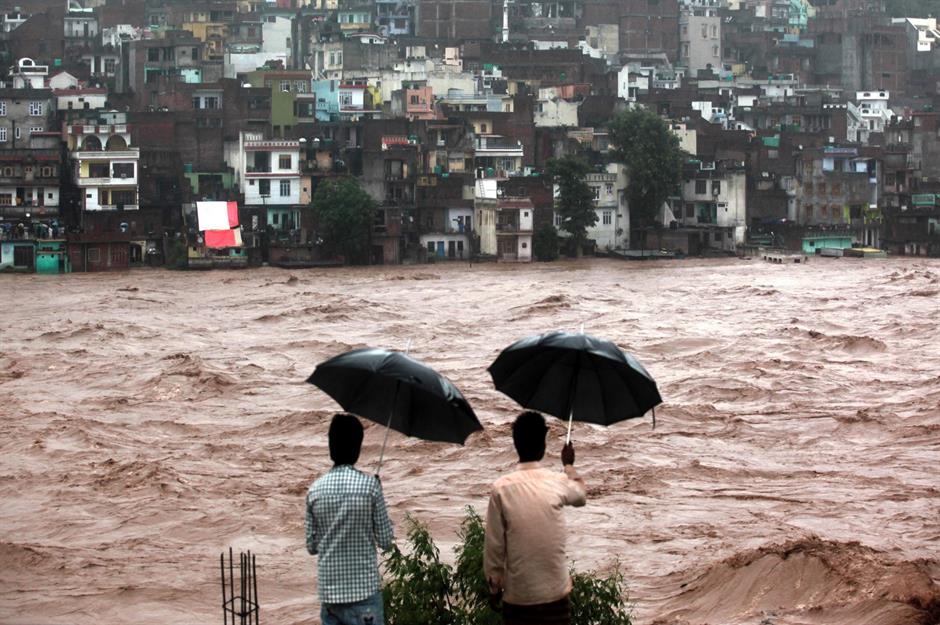 Roughly 80,000 people had to be evacuated or rescued from the affected areas until the waters finally subsided on 26 September. As the floods ripped through over 4,000 villages, 2.5 million people were affected by the catastrophic floods. 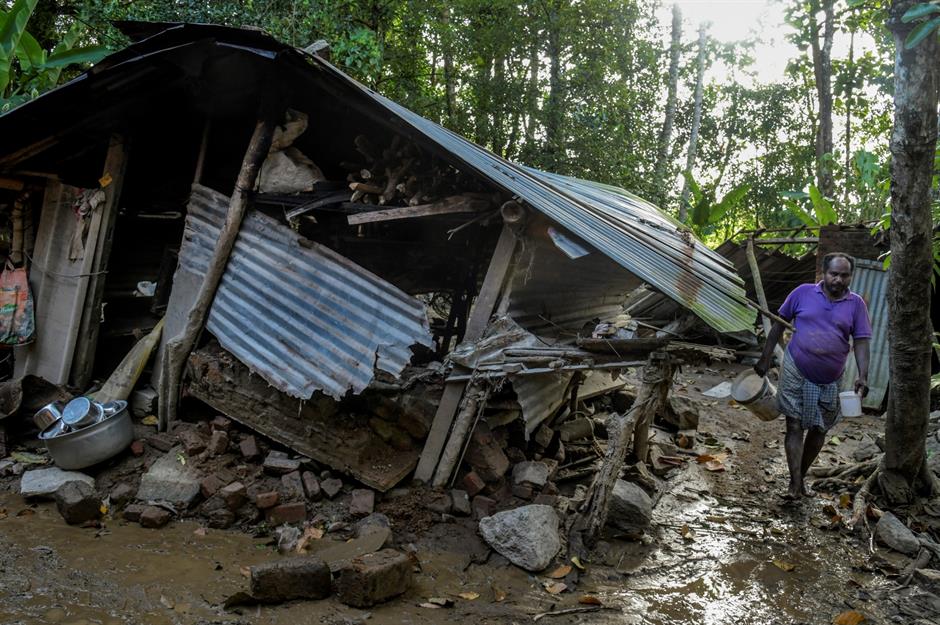 Between July and August 2018, Kerala, one of India’s southern states, experienced its worst floods since 1924. The region, which has 44 rivers, is used to intense rainfall during the four-month long monsoon season. However, in 2018 vast amounts of rain fell during a significantly shorter period, which is what triggered the landslides.

Dramatic weather events from 1900 to today 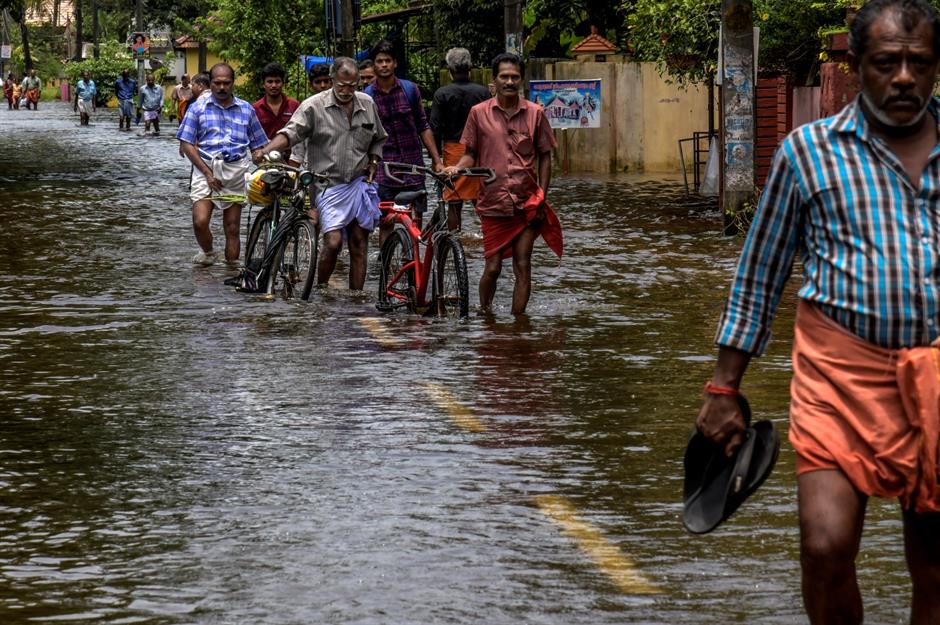 The flooding and mudslides swamped 13 out of 14 of Kerala's districts, killing at least 400 people in flood-related incidents and displacing thousands. The cost was an estimated 400 billion rupees ($5.6bn/£4.3bn) in damages. 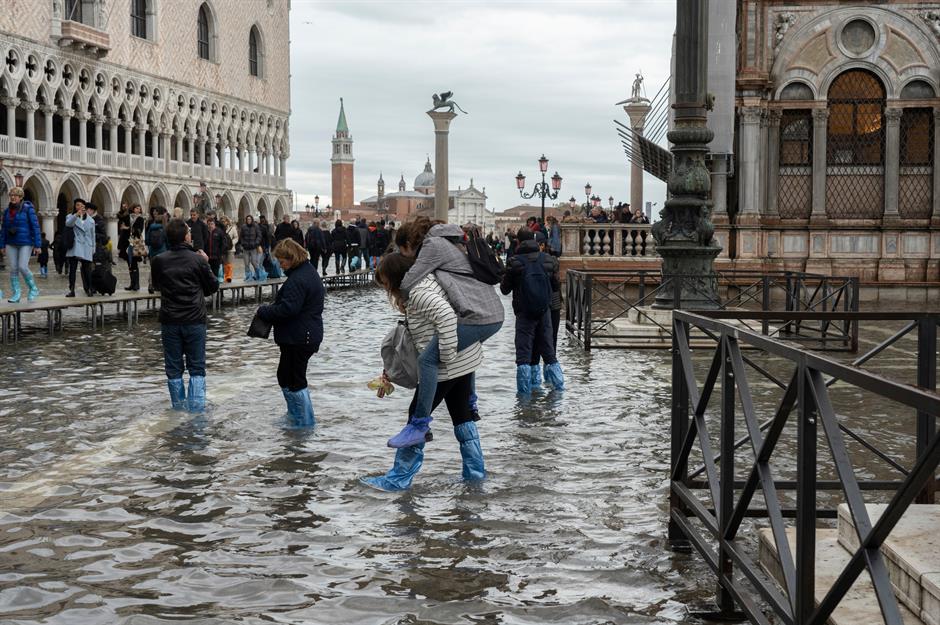 Venice's residents are used to the "acqua alta" (high waters) but 15 November 2019 saw the highest tide in 50 years, submerging the tourist hot spot. The floods were exacerbated by a southern wind that pushed water up the Adriatic into the Venice lagoon. Water levels peaked at 6 feet (1.87m) the highest since 1966 when levels reached up 6.3 feet (1.94m). Wooden platforms have been built for residents and tourists to travel across the city as according to officials, more than 85% of Venice was flooded.

At least two people died and authorities fear that with Venice continuing to sink as water levels rise each year more local residents will relocate. The flood damage is already estimated to be hundreds of millions of euros as the city, and its inhabitants, struggle to cope with the sheer scale of the water.

The world's landmarks under threat from climate change