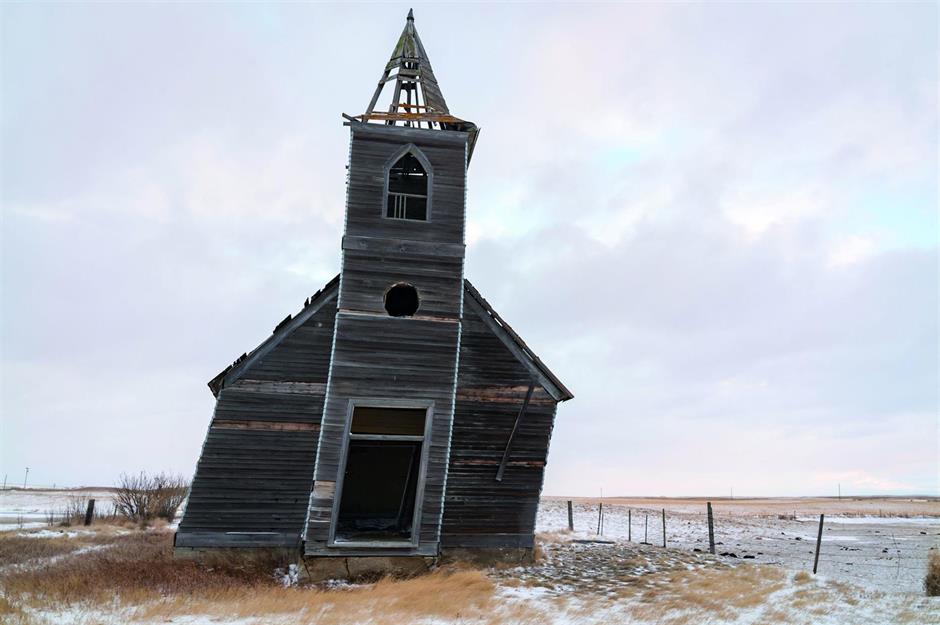 The world is full of magnificent spots which were once sacred to lost civilisations. The new book Abandoned Sacred Places by Lawrence Joffe, explores the most amazing in the world. We've handpicked some of the most famous and fascinating to discover the history that lies behind them. 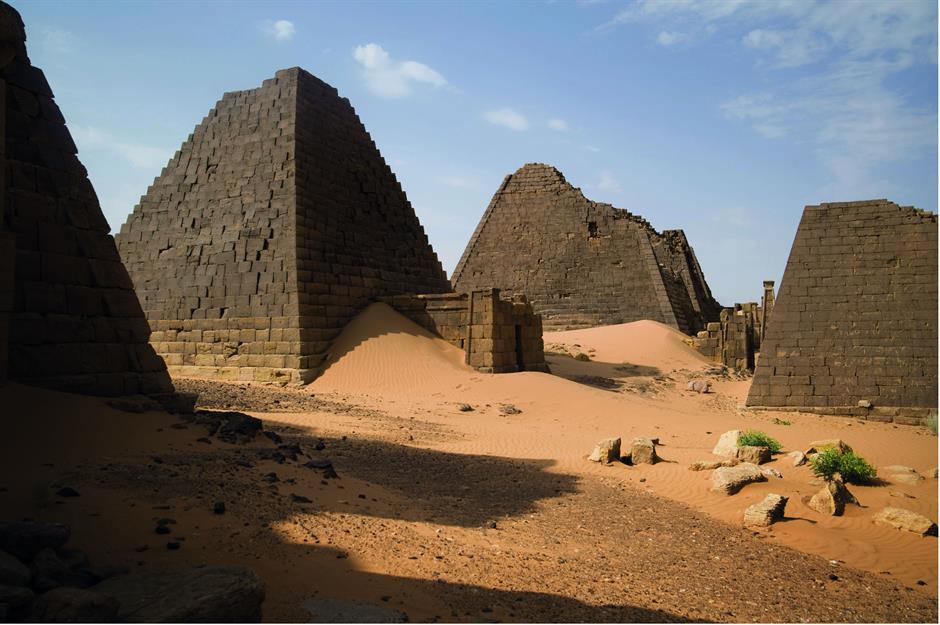 Anthon Jackson/Shutterstock
Three black-stoned pyramids poke out of the desert, symbolising the former power of Nubia. Also called Kush in the Bible, Nubia at times ruled over its great rival, Egypt. These edifices are some of 177 pyramids found in Meroë. They were largely built from the 4th century BC to 4th century AD. Steeper than their Egyptian cousins, many were decapitated by European fortune-seekers. And most have at their base offering temples for the deceased.

Near to the Kharga Oasis in the Sahara Desert lies Al-Bagawat, one of the world’s earliest Christian cemeteries. Hundreds of tombs date from the 4th to 7th centuries AD. Frescoes of Adam and Eve, Noah’s ark and St John adorn Bagawat’s Church of Exodus and Chapel of Peace. While Coptic Christians make up about 10% of Egypt’s current population, Bagawat last saw activity in the 11th century AD. 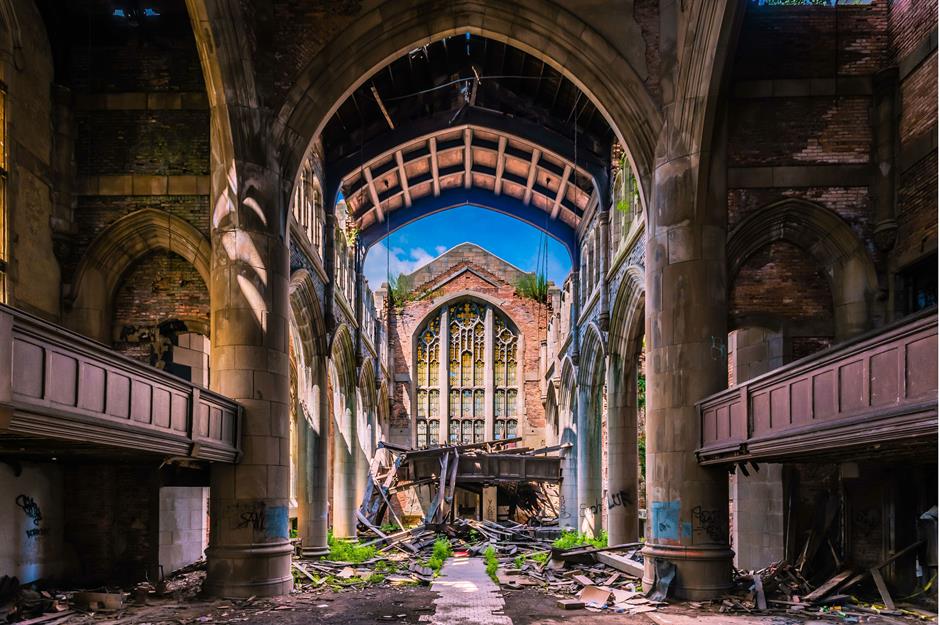 Boyd Hendrikse/Shutterstock
The City Methodist Church was a hub of 1950s urban life in Gary. Its congregation exceeded 3,000 and its surrounding nine-storey complex had a theatre, gymnasium and university annexe. But the church closed in 1974 after 48 years and now lies in ruins. So what caused its demise? In a nutshell, de-industrialization: Gary, 40 miles (64km) from Chicago, was renowned for its steel mills and associated businesses. Then economic malaise destroyed jobs and churches like City lost congregants. 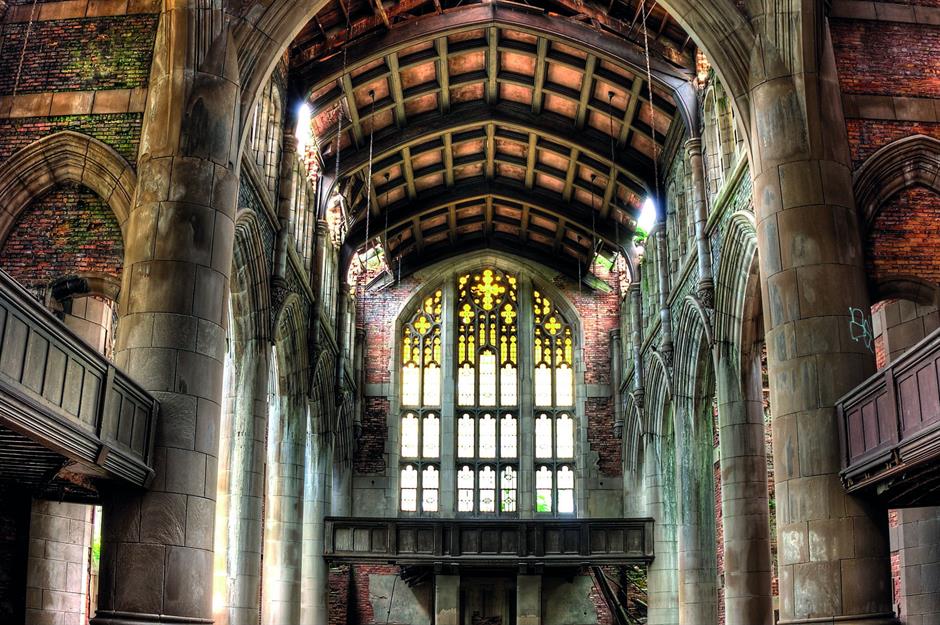 Kevin Key/Shutterstock
The church’s vaulted ceiling and massive internal columns express the confidence of its founder, Methodist minister and social activist William Grant Seaman. He persuaded US Steel to bequeath inner city land for a church to improve the morals of residents who lived near brothels and speakeasies. To an extent he succeeded – until recession saw the church’s congregants flee to the suburbs.

Dmitry Evseev/Alamy
In AD 961, the Bagratid dynasty declared Ani the capital of their new Christian Armenian kingdom. Some 74 years later, Prince Abigharib Pahlavid completed the Church of the Holy Redeemer, or Surp Amenap’rkitch, to house supposed splinters of the True Cross. Abandoned in the 18th century, the church now lies on Turkey’s border with modern Armenia. A storm in 1955 and earthquake in 1988 nearly destroyed the edifice.

Think of the United Arab Emirates and images of soaring skyscrapers and affluent boulevards fill your mind. But this picture tells a different story of a mosque and associated villa complex that fell victim to changing fashions. It appears near Al Madam in Sharjah, along the E44 road to Dubai.

cpaulfell/Shutterstock
Cross-Arabian camel-borne commerce in frankincense, myrrh and spices turned Mada’in Saleh into a thriving metropolis. But it became a desert ghost town after Rome conquered the region in AD 104 and switched trade routes. Located today in south-western Saudi Arabia, Mada’in was the second great Nabatean city after Petra. 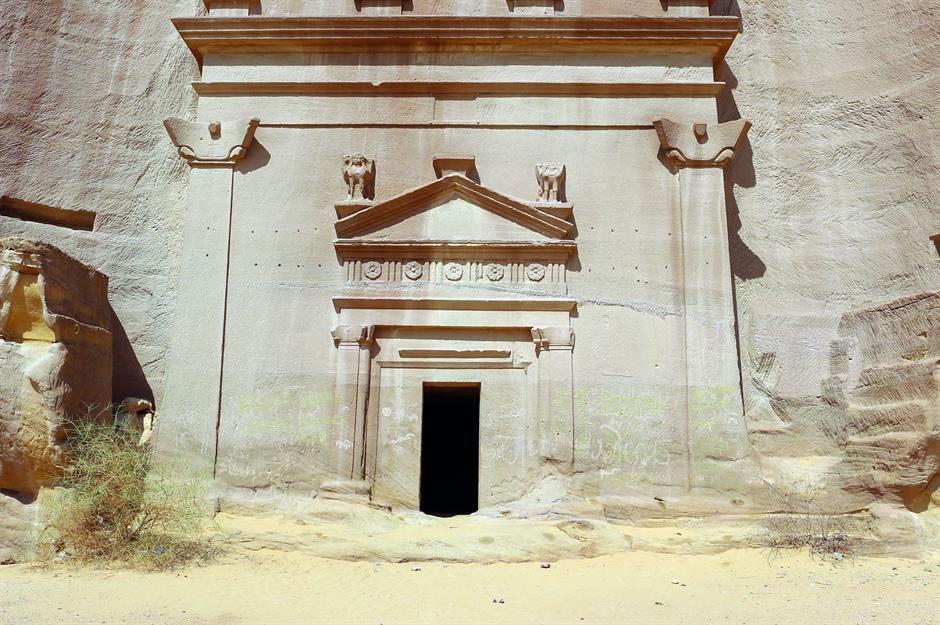 cpaulfell/Shutterstock
The city’s 131 giant tombs were carved out of sandstone around the first century AD, blending Arabian, Hellenistic, Phoenician, Assyrian and Egyptian aesthetics. But how did the Nabateans manage to build on such a scale? They certainly knew how to source and store water; Mada’in survived its arid surroundings because of man-made, underground wells. 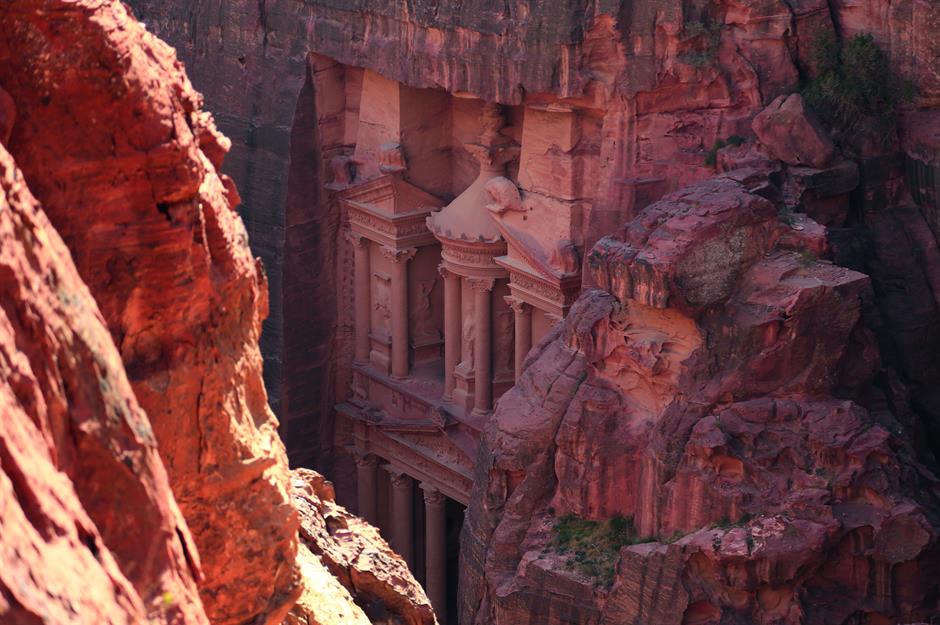 DDCoral/Shutterstock
Emerging from the Siq, a narrow mile-long canyon carved out of rock, visitors at Petra suddenly behold the miraculous sight of the pink-hued Treasury. Yet "Treasury", or Al-Khazneh in Arabic, is a misnomer; it was really a mausoleum. Decorations show images probably of Al Uzza, a local Nabatean goddess of stars, who was associated with the Egyptian Isis, Roman Venus and Greek Aphrodite. 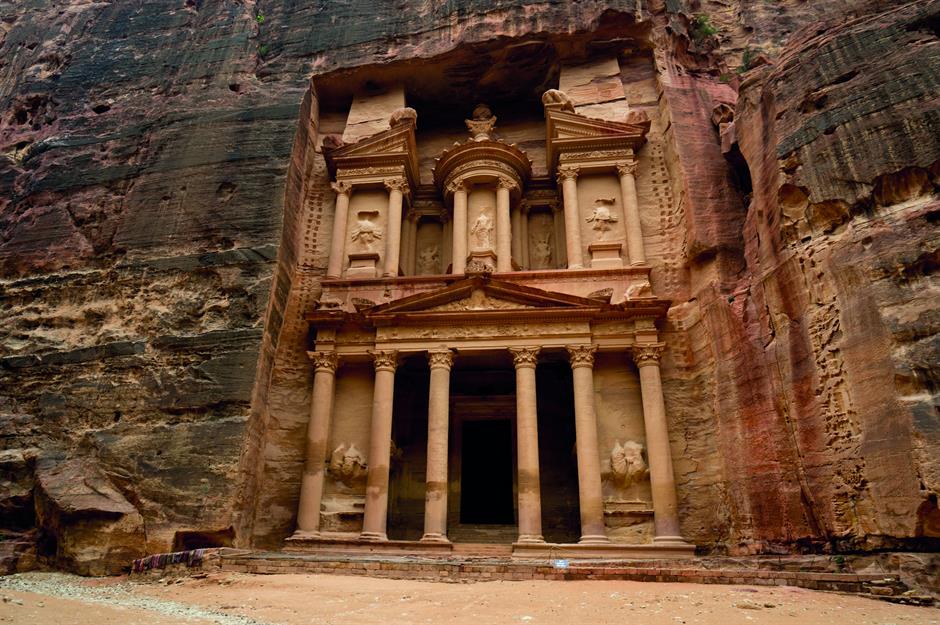 Huey Min/Shutterstock
Petra was Nabatea’s capital from the 3rd century BC until the Romans annexed it in AD 106. The city flourished at the crossroads of trade between the Mediterranean and Arabia. Nabateans practiced an early Arab form of polytheism (belief in more than one god), as evidenced by the many small temples and tombs with niches for ‘block gods’ throughout Petra.

Sakdawut Tangtongsap/Shutterstock
These are some of the 2,230 surviving Buddhist temples at Bagan in Myanmar (Burma). Local rulers began building here in 1057, until earthquakes and Kublai Khan’s Mongols destroyed the Pagan Kingdom in 1287. 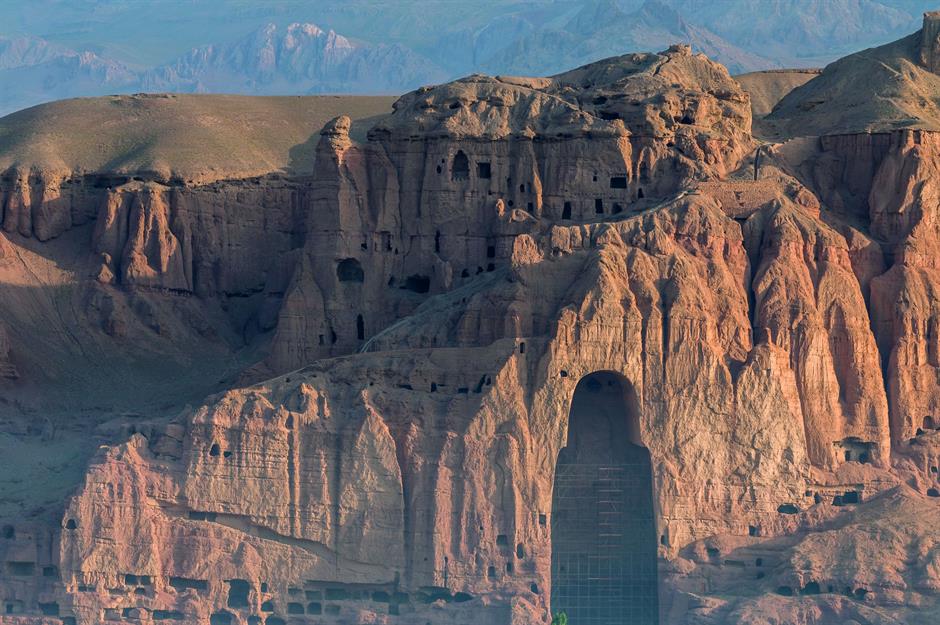 The Taliban’s destruction of Bamiyan’s two giant Buddhas in March 2001 created a defining image for fundamentalist barbarity only surpassed by images of the September 11 attacks six months later. In fact, by the 13th century Buddhist worship had mostly ceased in Muslim majority Afghanistan. So what explains this act of nihilism? Taliban fanatics saw pre-Islamic history as ‘a time of ignorance’. Worse, the rock-cut statues seemed like idols, which are forbidden in Islam. Yet historically, most Muslim rulers have tolerated, and even protected, non-Muslim sacred sites. 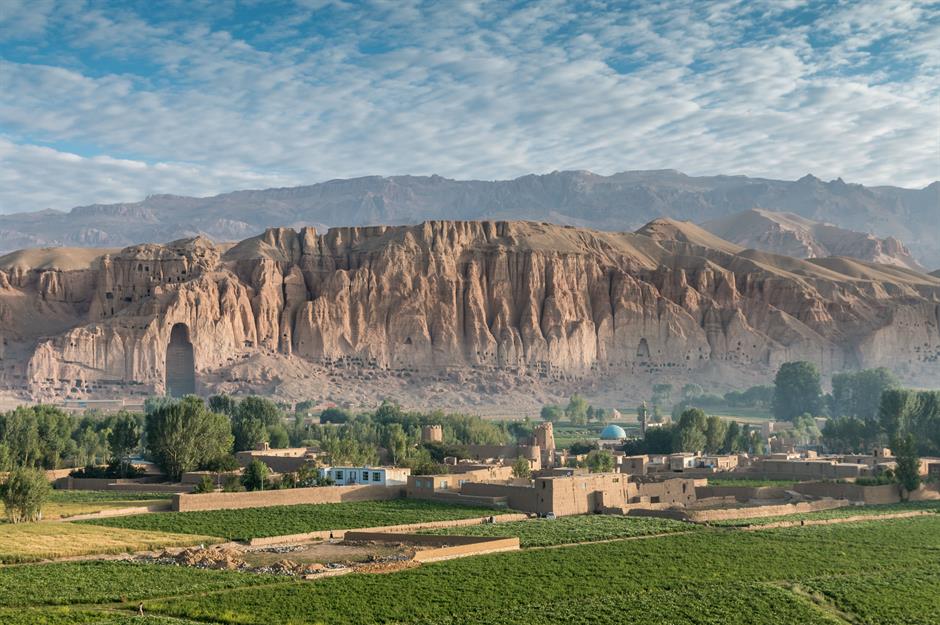 Torsten Pursche/Shutterstock
Afghan Buddhism thrived under the Kushan Empire (200 BC to AD 200). At Bamiyan Valley on the Silk Road, Buddhists sculpted the world’s tallest standing Buddhas between, depending on accounts, either AD 200–400 or AD 500–600. An early Chinese report described the statues as covered in stucco, metal, gems and pigment, but how they were constructed remains a mystery. In addition, around Bamiyan nearly 1,000 Buddhist caves were carved along a cliff face. 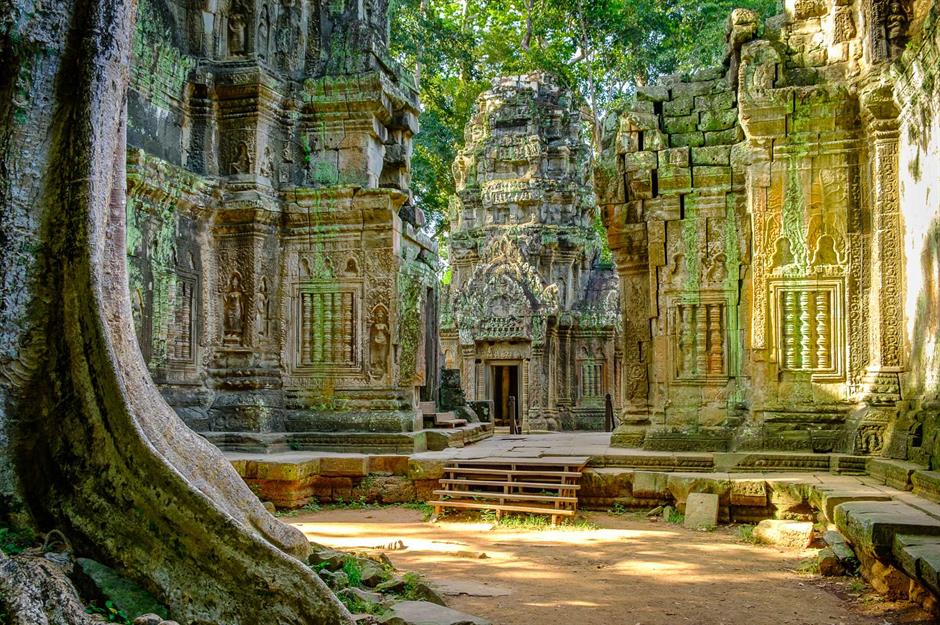 Mark R Croucher/Shutterstock
At King Jayavarman VII’s Ta Prohm Temple the gates contain a massive head of a Buddha – or possibly of the king himself. Ta Prohm crumbled after the Khmer Empire collapsed in the 15th century. The ruins of the city of Angkor were not rediscovered until 1838.

Michal Piec/Shutterstock
My Son’s temples prove that Hinduism once thrived far from its Indian birthplace. Cham people built these brick masterpieces between the 4th–13th centuries, their empire falling to the Viet people in the 1600s. Only 25 of the original 70 temples survive, others having succumbed to nature and conflict, including US bombing of Viet Cong positions during the Vietnam War. 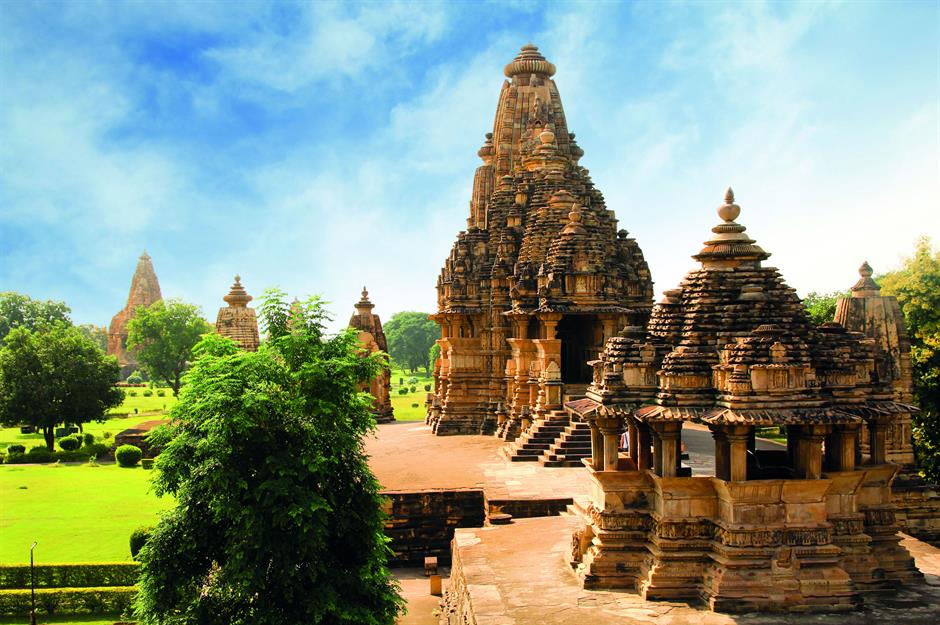 Pinkcandy/Shutterstock
Kandariya Mahadeva Temple conveys soaring height despite its relatively small size. Builders achieved this effect by raising it on a 20-foot (6m) terrace, then compressing five halls and pavilions into a compact shape, and clustering domed spires around a graceful 102 foot-high (31m) tower. The result replicates a Himalayan peak where Hindus believed the gods lived. A 10th century AD king constructed Kandariya, dedicated to Shiva, as one of 20 temples he built at Khajuraho. 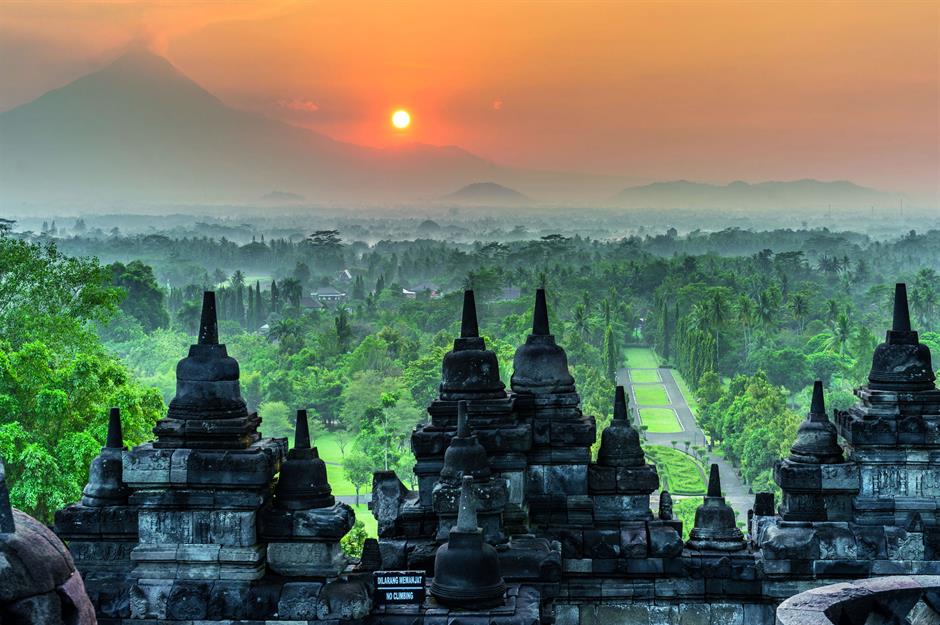 Manuel Ascanio/Shutterstock
Few sights rival that of sunrise over Borobudur, the world’s largest Buddhist temple, with Mount Merapi in the distance. Yet there is a dark paradox behind the serene image: Merapi is volcanic, and many scientists now believe that eruptions and earthquakes between 928 and 1006 led monks to abandon Borobudur. British and Dutch explorers only ‘rediscovered’ the complex in 1814, after which it was renovated. 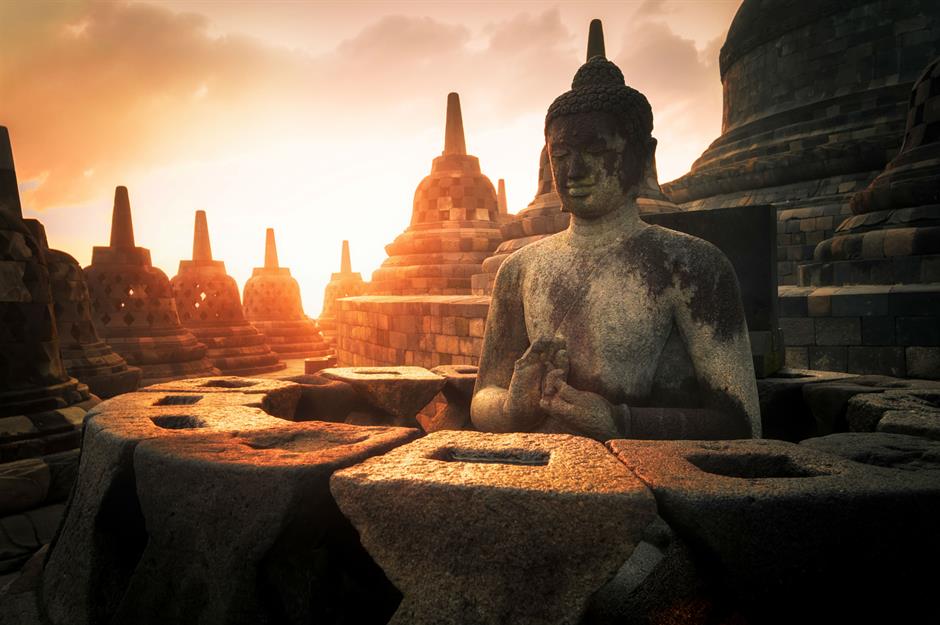 Perfect Lazybones/Shutterstock
The Mataram Kingdom erected Borobudur in around AD 824. That means it enjoyed barely 200 years of use before the forest reclaimed it. Structurally, Borobudur works as a giant explanatory book: its 10 concentric rings stand for the ascending steps needed to achieve the perfection of the Buddha. 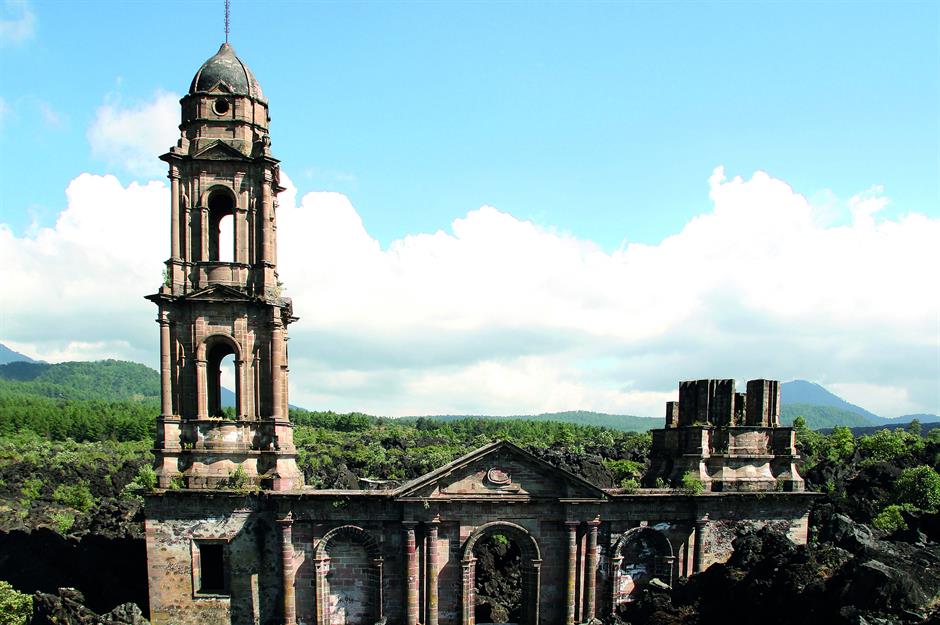 A deluge of ash and lava destroyed the town of San Juan Parangaricutiro in 1943, yet this church tower still proudly emerges above the black debris. Matter accumulated over the next eight years and created the world’s youngest volcano, Mount Paricutin, which eventually topped 9,186 feet (2,800m). 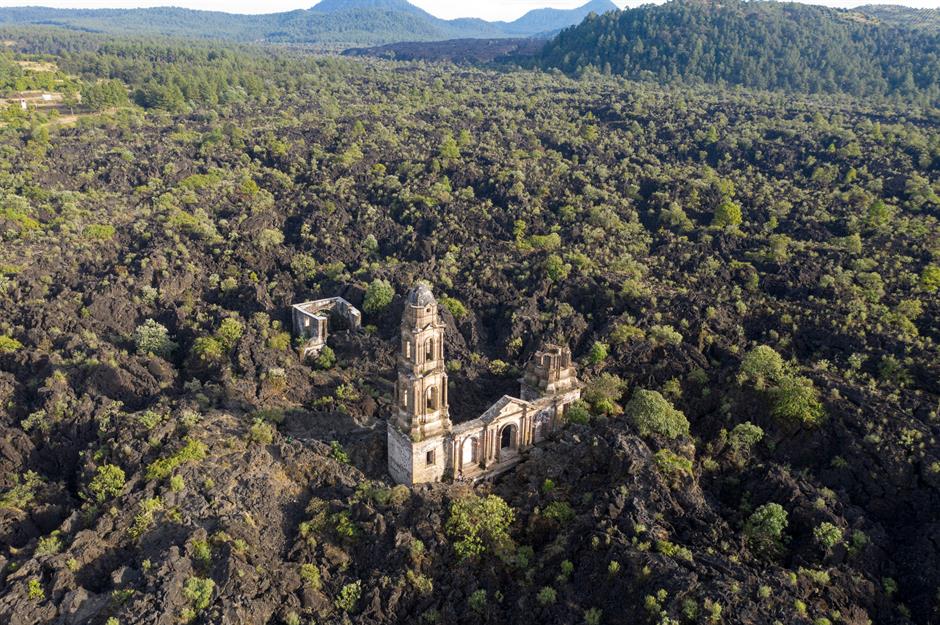 The Basilican-style church probably survived the eruptions because of the expertly engineered solid slabs that Augustinian monks used when they began building in the mid-1600s. Pilgrims used to flock to the old church to marvel at the reputedly miracle-working crucifix of El Señor de Los Milagros (Lord of Miracles). Since 1943 a new town has sprouted beside the old. Its church houses the wooden image of a saint that fleeing parishioners rescued from their former sanctuary. Curiously, the town’s name means St John of the Bedspreads. 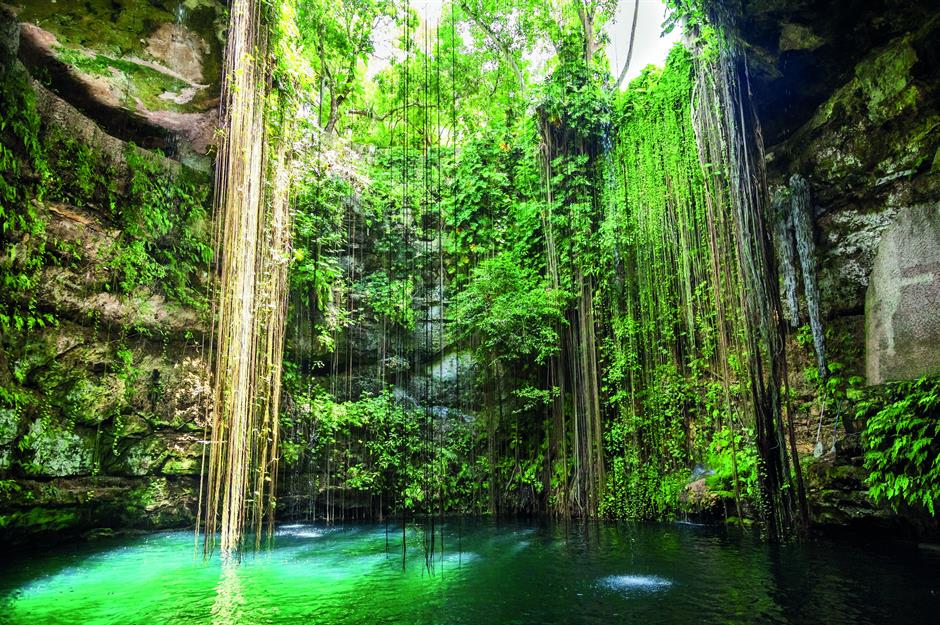 The Mayans quite reasonably venerated Ik-Kil’s cenote – a groundwater-rich natural sunken well – in the otherwise arid Yucatán Peninsula. Yet its placidity is deceptive. Skeletons discovered in the depths, along with jade and gold objects, speak of human sacrifices to the rain god ChaacNearby lies the city of Chichen Itzá, founded by the Mayans in the 6th century AD and conquered by Toltecs in the 10th century AD. Chichen Itzá contains more fearsome cultural clues: a Temple of the Jaguars, fanged rattlesnake sculptures, ceremonial pyramids and a court for tlachtli, a sacred ball game where losing teams literally lost their heads.

DouglasDepies/Shutterstock
This temple at Becán probably honoured the earth monster Itzamna, whose giant stucco masks dot the site. Maya elites dwelt in vast chambers near the town centre, while false stairways and hidden tunnels suggest that Becán was a military centre – and target. Becán dramatically revived in AD c.500 after a long decline, before being abandoned by AD 1200. 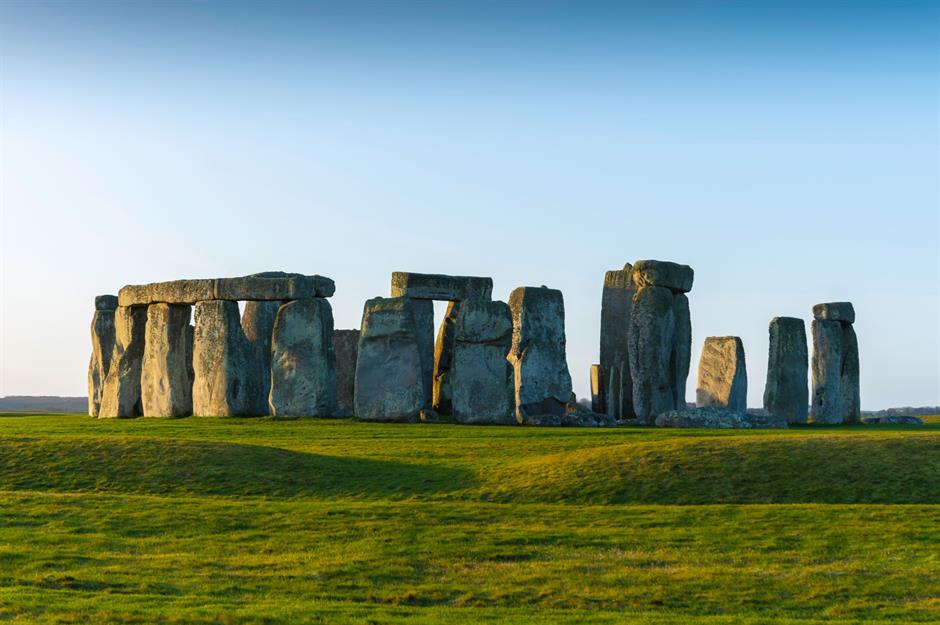 Morphius Film/Shutterstock
Every year people flock to Stonehenge to celebrate the winter and summer solstices. But what did the site really mean to the Neolithic and Bronze Age people who built and worshipped there? The answer is still cloaked in mystery. 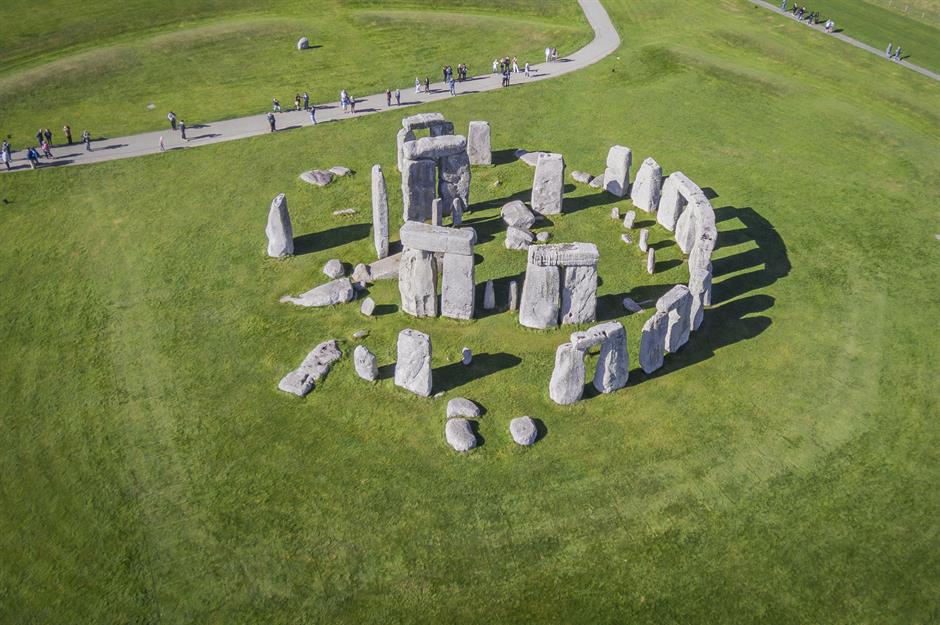 We do know that Stonehenge was built in six stages between 3000–1520 BC. Uniquely, the circular monument consists of artificially shaped sarsen stones, along with smaller bluestones that prehistoric Britons somehow carried from south Wales up to 150 miles (240km) away. Scholars have theorised that Stonehenge functioned variously as an eclipse-predicting ‘computer’, a monument to the ancestral dead, a seasonal gathering place located at the intersection of other prehistoric sites, or a site of sacred healing.

Discover more amazing views of Britain from above 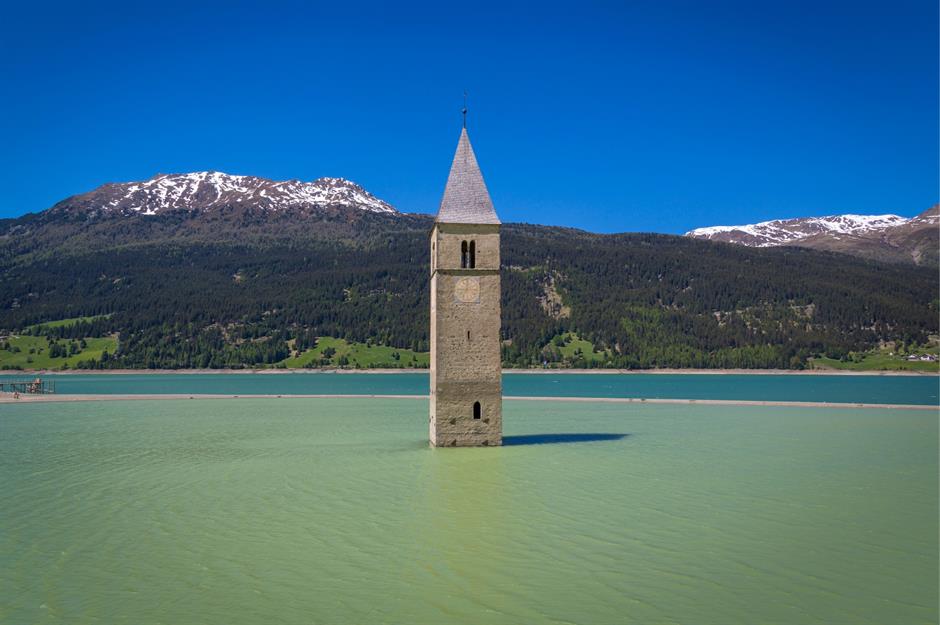 Johannes Rigg/Shutterstock
Like something out of a fairy tale, a Romanesque church spire dating back to 1355 pokes above the surface of Reschensee. Yet in 1950, the image resembled a nightmare for 150 families who were forced to flee the deliberate flooding of their village to create a reservoir. 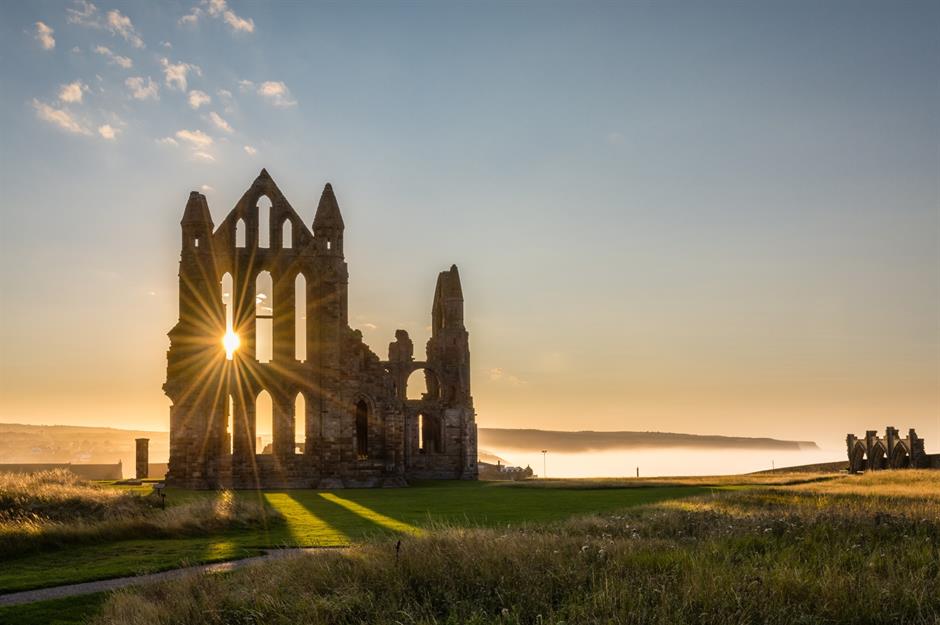 The abandoned structure that we see today is Whitby Abbey’s third incarnation, a handsome Gothic church first begun around 1225, but, due to lack of funds, only completed two centuries later. The abbey was suppressed in 1539 after Henry VIII’s rift with Rome and many associated buildings were destroyed. Later, wind and rain eroded parts of the building, before the German navy caused further damage by shelling the abbey during the First World War.

The world's haunted hotels will keep you up at night 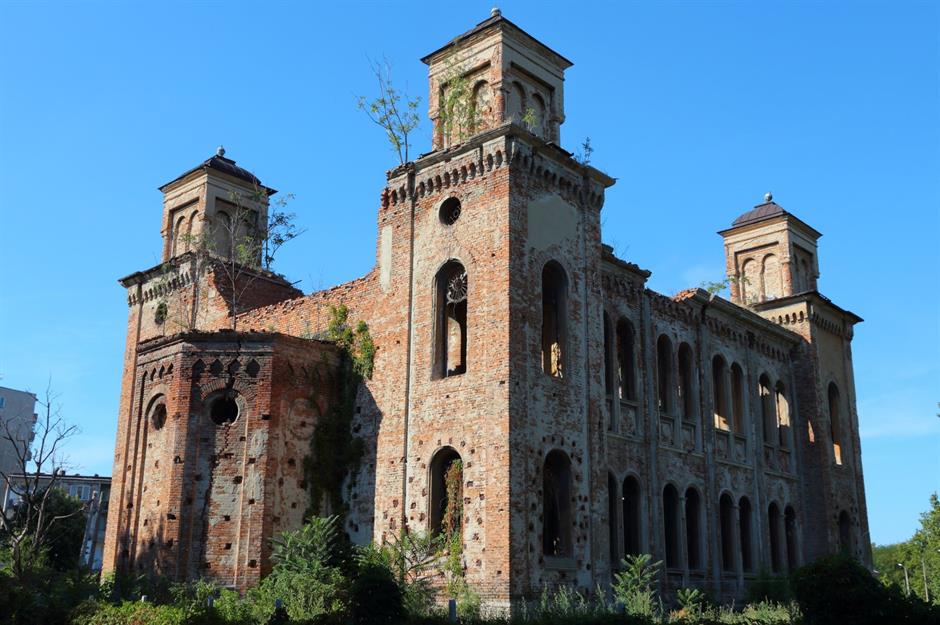 Unlike Bulgaria’s central and eastern European neighbours, most of its Jews were not Ashkenazim but Sephardic Jewish descendants of refugees expelled from Spain in 1492. Under German influence, Bulgaria passed discriminatory laws against Jews after July 1940; yet almost uniquely in Europe, no Jews from Bulgaria proper were deported to death camps. Most Bulgarian Jews left for Israel after the war, accelerating the decline of Vidin’s synagogue. Post-war communist rulers appropriated the building and ended services there. 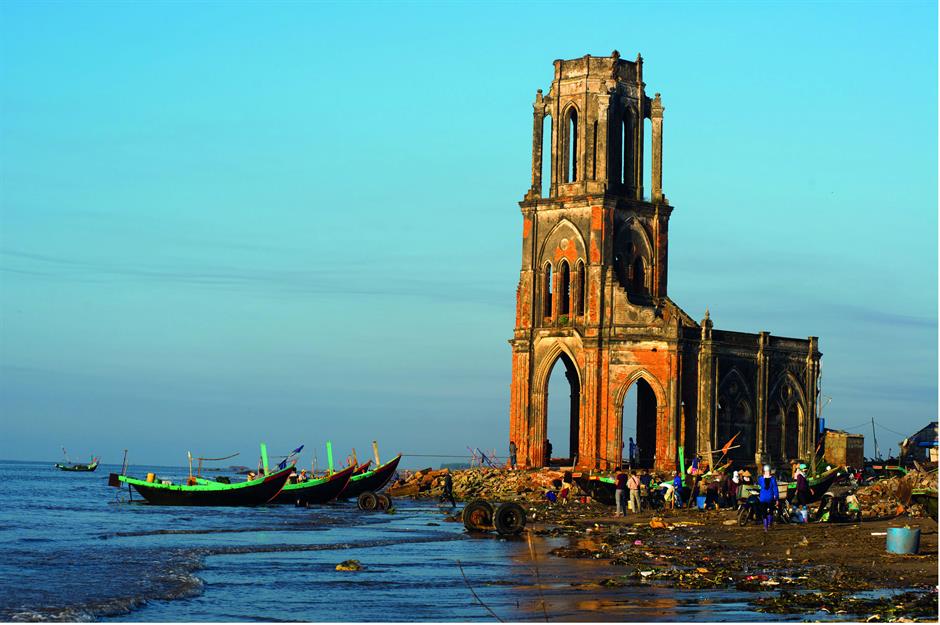 Looking like a charming piece of Normandy transplanted to the Vietnamese seaside, Trai Tim Catholic Church was built in 1927 when Vietnam was part of French Indochina. It still just about stands, but lost its last congregants in 1996. Like many churches and villages in Nam Dinh province, it has been the victim of coastal erosion. Yet its frame survives, as does a bell tower that once also served as a lighthouse.

Discover more of the world's abandoned buildings you can actually visit 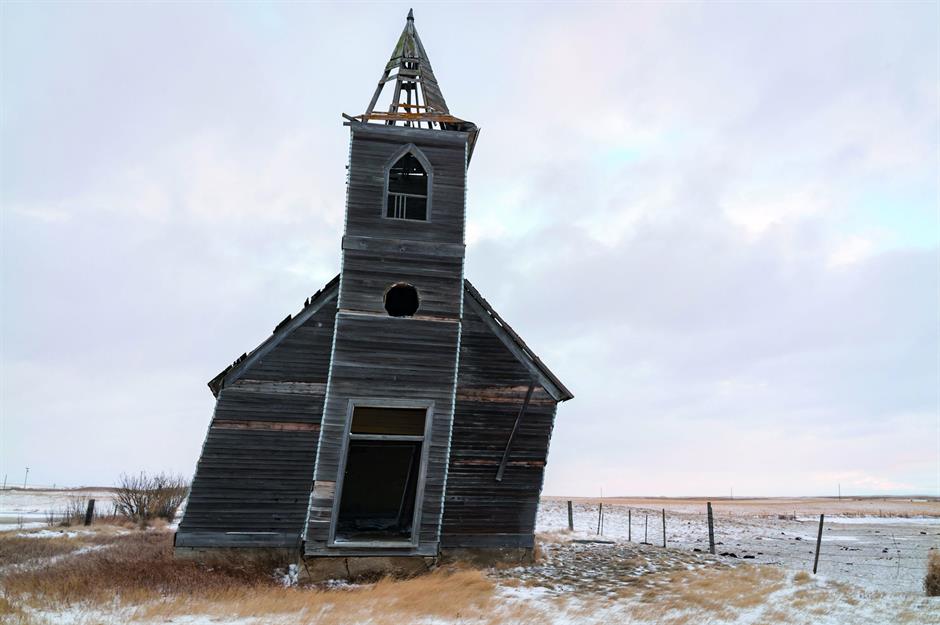 The only substantial building left in Dooley, Rocky Valley Church was built in 1915 and deserted 30 years later. Dooley’s economy collapsed after repeated crop failures, a rash of fires, armyworm infestations and cold winters that froze railway lines. Ultimately Dooley became a ghost town – a sad yet not uncommon counter-narrative to the American dream. 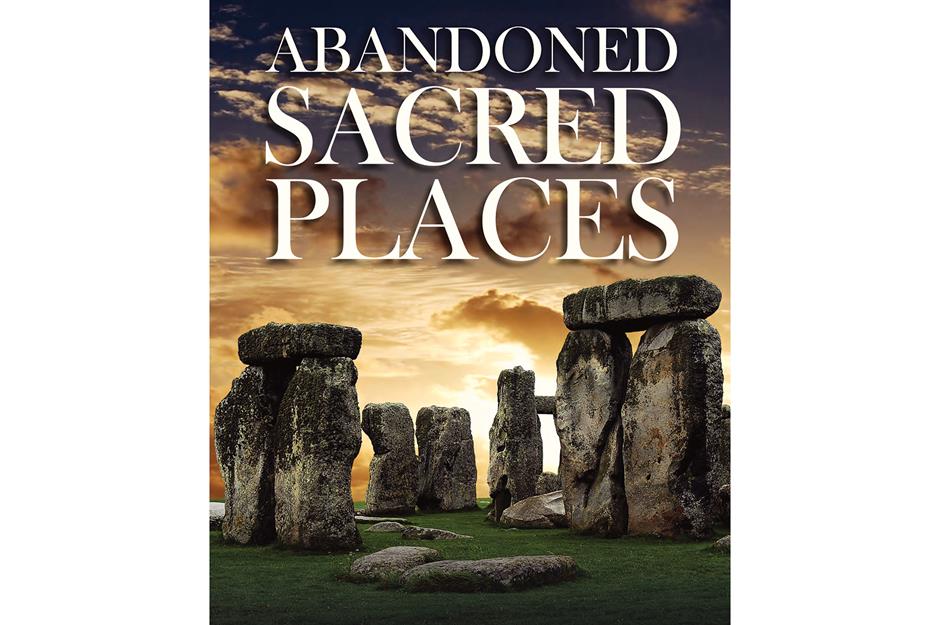 All images are taken with permission from the book Abandoned Sacred Places by Lawrence Joffe, published by Amber Books Ltd and available via Amazon.