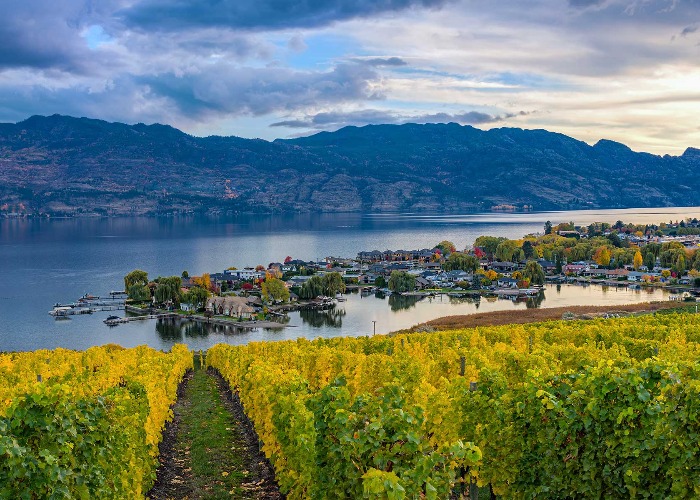 More than just a wine region, the Okanagan in British Columbia makes for a brilliant Canadian break. Here’s why.

The rows of vines stretch out to a sparkling lake and the forested hills beyond are peppered with hues of green, red, yellow and orange.

The bell tower indicates that it's quarter to the hour, and with a crisp glass of white wine in hand, it would be easy to believe I'm in Tuscany. Even the sky looks like an Italian Renaissance painting, the clouds putting on an incredible sunset.

A brisk breeze and the chill in the air, though, reminds me I'm not. I'm in British Columbia, Canada, and winter has arrived early.

There's a sprinkling of snow on the highest hills and this bell tower doesn't belong to a pretty Tuscan village church but the locally-owned Mission Hill Winery.

Mission Hill is one of hundreds of wineries in the Okanagan, a valley that sits along an eponymous lake north of Vancouver. The region is known as the "Tuscany of Canada" and one of the country's top wine-making areas.

It's not all about wine here, though. If you’re planning a trip to British Columbia, here are a few more reasons you should consider a break in the Okanagan.

1. For brilliant views at every turn

While the wine is the big draw in this valley, the lake no doubt keeps visitors coming back. From almost anywhere in the Okanagan you’ll find fabulous views of the water. The cities of Kelowna and Vernon sit on its shores – you’ll get great views from the top floors of the Delta by Marriott hotel in Kelowna – and there are plenty of viewpoints in the surrounding hills.

In summer the thick green forest on the rolling countryside that surrounds the lake is a gorgeous backdrop for its brilliantly blue waters, but visit in autumn and the fall foliage is even more spectacular. 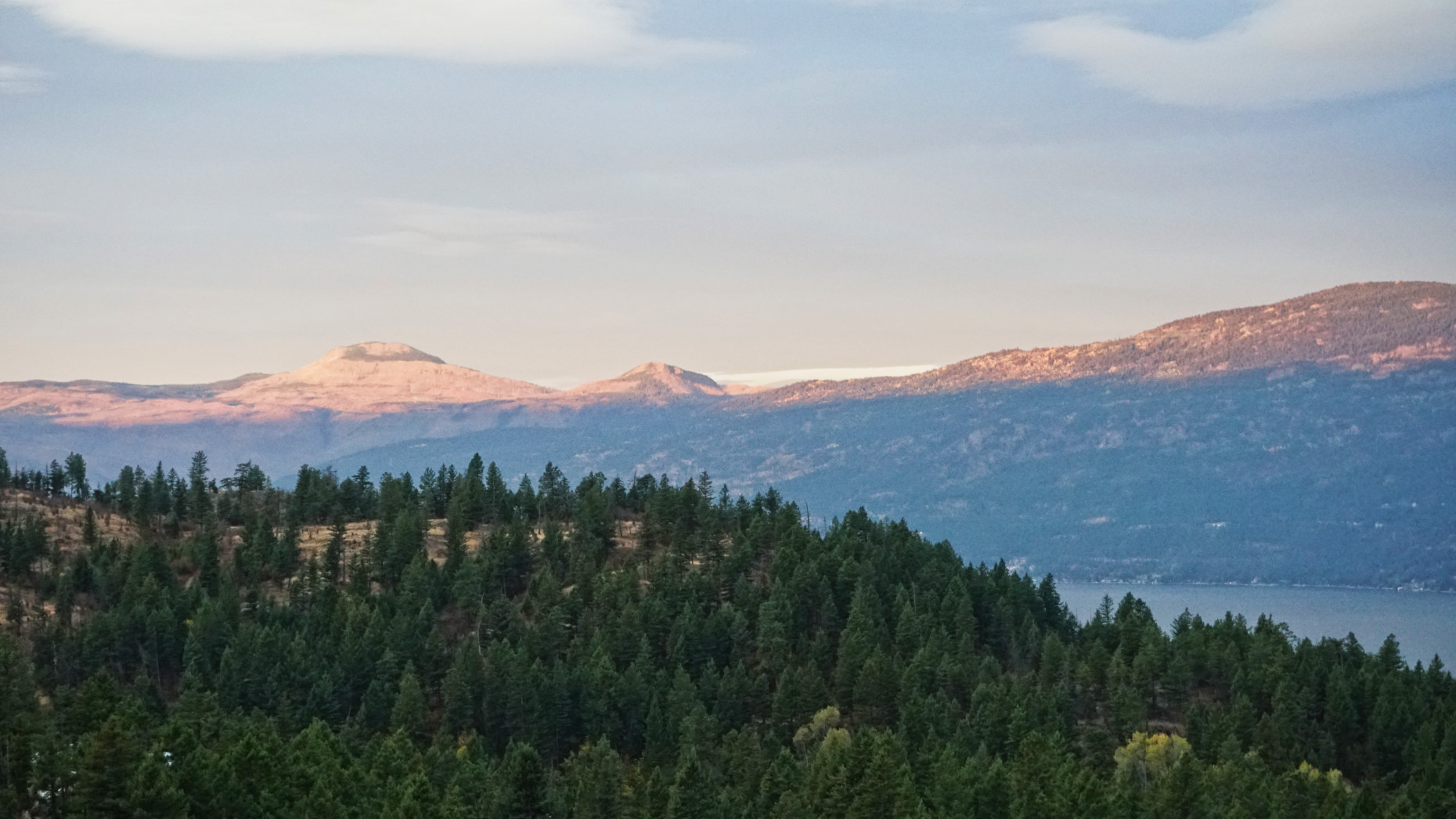 Just southwest of Vernon, Sparkling Hill Resort & Spa has prime location over Okanagan Lake and is a wonderful retreat after a day’s exploring. Owned by Swarovski and named after three million-plus sparkling crystals that adorn its walls and artworks, the hotel’s rooms all have floor-to-ceiling windows and bathtubs with a spectacular view.

It’s a blissful base from which to explore the northern part of the Okanagan, whether you’re driving between wineries or just want to walk on the many trails that lead off across the hills.

The excellent spa, with its indoor and outdoor heated pools and hot tubs, is open late for essential evening restoration – though take note of the ‘European hour’ from 9pm to 10pm, during which bathing suits are optional. 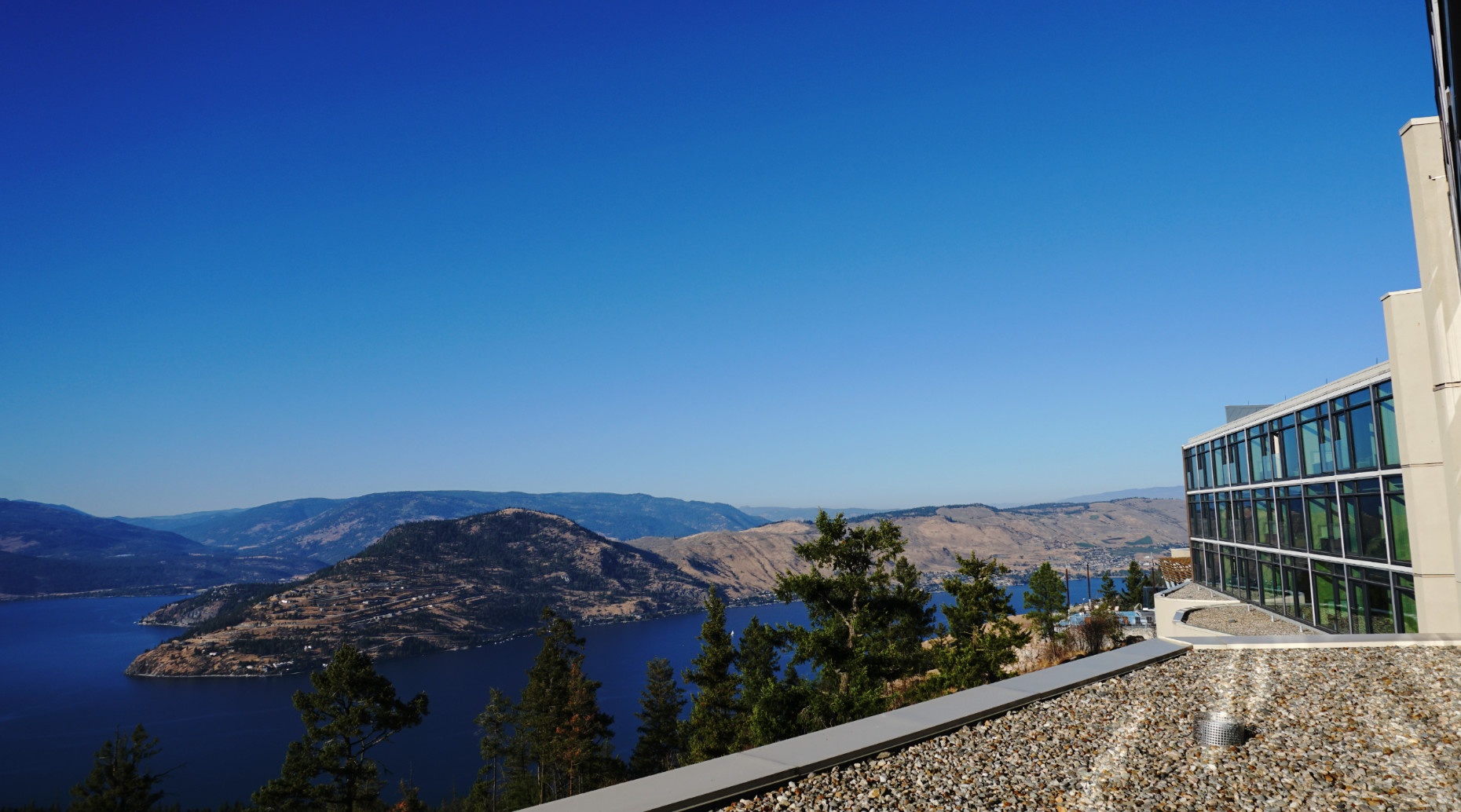 3. For farm-to-table eating (and drinking)

Thanks to strict export laws – even just across provincial borders – British Columbia's alcoholic drinks remain largely inside the province. This means the restaurants and bars throughout the valley tend to have something local on the menu.

Aside from visiting wineries, there are distilleries, cideries and farms to explore where you can often indulge in tastings. BX Press has some truly special ciders – try the one with the hops for serious summer refreshment – or head over to Okanagan Spirits to tour the distillery and sample whisky, gin and even absinthe.

Long-table, family-style dinners happen throughout the valley in summer, and there’s always a celebration of some sort. Head to Davison Orchards in autumn to enjoy a harvest festival with pumpkin picking in its sloping fields, and don’t miss their super sweet, moreish apple juice and delicious pumpkin pie.

With the lake its most prominent feature, there are of course plenty of waterborne activities in the Okanagan. Try wakeboarding, power boating or take a slow and steady kayak across the water and stop off on one of the many beaches.

The outdoor highlight in the Okanagan is the Myra Canyon. Once used for the Kettle Valley Railway and built at the turn of the last century, a series of 18 trestles and two tunnels have now been restored and are a popular cycleway or running route. Adventurous grown-ups and children (aged 3+) will also enjoy the high ropes and zip lines at Myra Canyon Adventure Park. 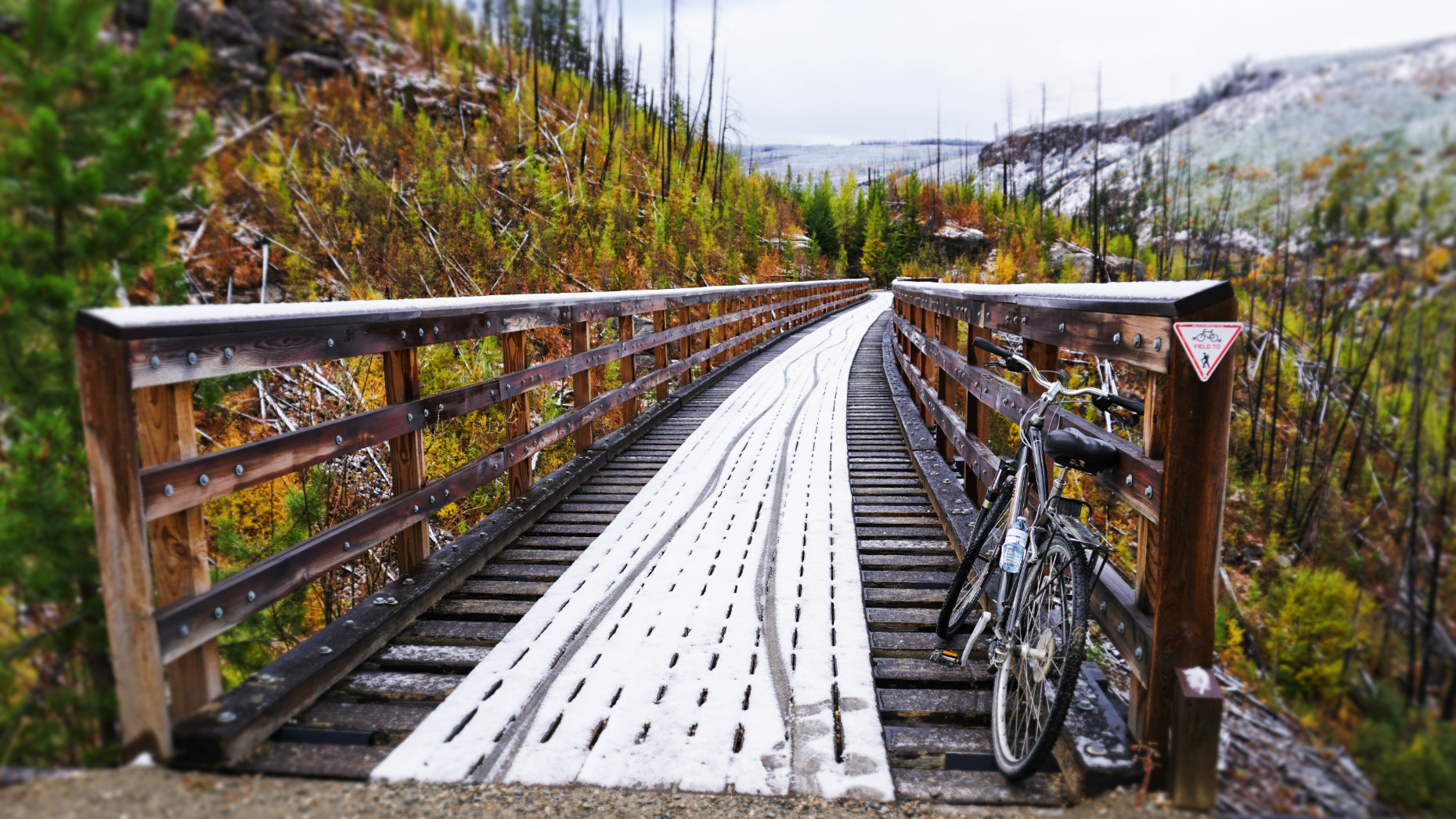 Arrive in Vernon and you won’t immediately swoon. It isn’t exactly the most beautiful city in Canada, or even BC, but stay a while and you’ll be charmed by the artistic and historical murals that adorn many of its buildings.

There’s a self-guided tour – maps available to download from the tourist office – or join one of the twice-weekly expert-led tours during the summer season. You’ll spot cowboys, a few of the area’s most influential figures, and even come face-to-face with Okanagan Lake’s answer to the Loch Ness Monster, Ogopogo.

6. For spectacular wines and cellar secrets

The wineries in this region produce some of the finest Canadian wines, but at many of them the experience goes well beyond a tasting.

Mission Hill is by far the most spectacular winery in this valley. Book a site tour with the Head of Wine Education, Graham Norton, and you’ll discover the story behind the buildings and a few of the secrets hidden inside the cellar, as well as sample some wines from the barrel.

At Summerhill, bottles are aged inside a pyramid because the owner believes the energy makes the wine taste better. At new kid on the block, O'Rouke's Peak Cellars, tastings can include a walk around the pinot gris vines followed by lunch in the modern Garden Bistro with floor-to-ceiling windows overlooking the 300-acre site. 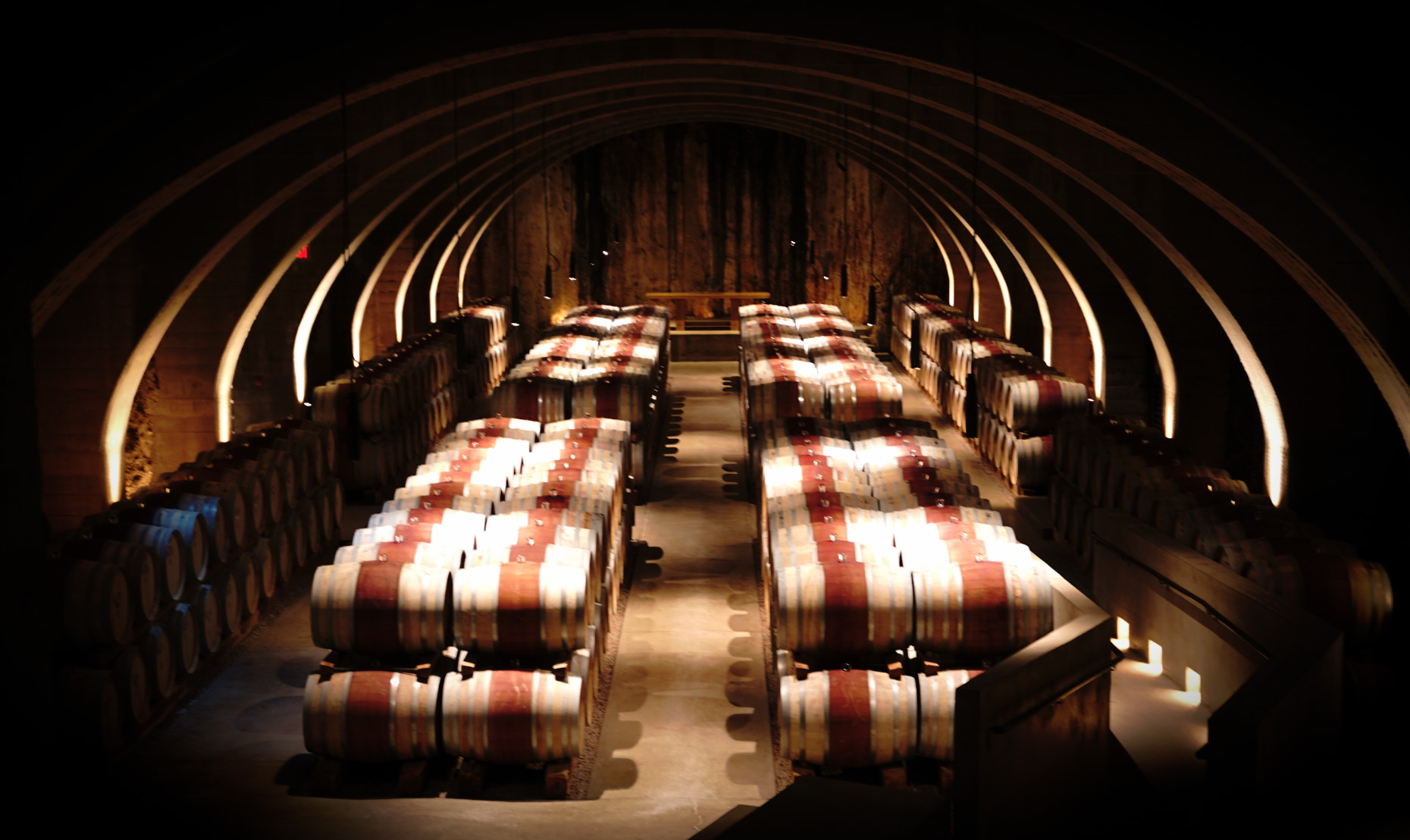 Highway 97, part of the Alaska Highway, is the main route through the Okanagan, so rent a car and head out to this incredible spot waiting to be explored.

For more information about the Okanagan, you can find inspiration on Route 97, Tourism Kelowna and Tourism Vernon.