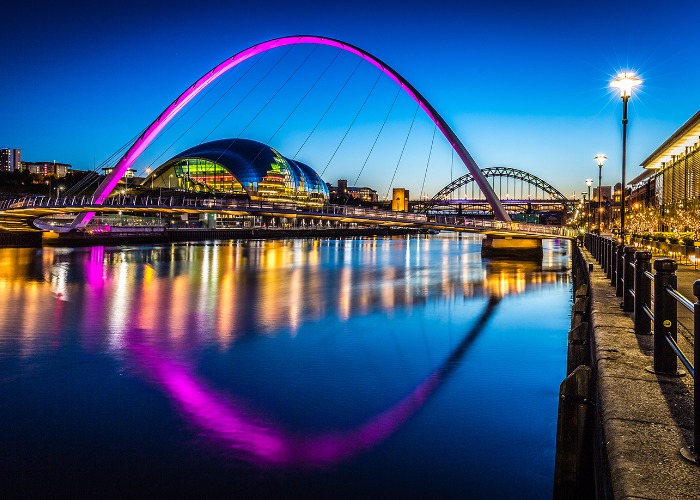 Whether you want museums or a heady nightlife, this city in northeast England is the perfect destination for a long weekend. Here's our day-by-day itinerary of what to do in Newcastle.

Newcastle has evolved into one of Britain’s best cities for a weekend break. The nightlife on Tyneside has long been popular with those who enjoy pubbing and clubbing and now a smattering of museums, galleries and restaurants ensure it’s also easy to fill a relaxing couple of days in northeast England.

Georgian stone facades dominate the city centre which was built in part by Richard Grainger and carry his name. More than 200 of Grainger Town’s 450 buildings are listed. The demise of the northeast’s heavy industry was followed by sandblasting – and a rise in civic pride, aided by the revamping of the indoor Grainger Market, which houses more than 110 independent businesses, and the Theatre Royal.

A post shared by Newcastle Theatre Royal (@newcastletheatreroyal) on Nov 15, 2017 at 2:38am PST

Check into: The Malmaison Newcastle hotel on the Quayside, around a 15 minute walk from Newcastle Central Station. The hip 122-room hotel is conveniently close to a handful of pubs and restaurants and overlooks the Gateshead Millennium Bridge which leads to the Sage Gateshead live music venue and Baltic Centre for Contemporary Art.

Eat at: Sachins. Situated behind the railway station, Sachins serves Punjabi cuisine in a modern setting. The long-established restaurant is a hit among discerning locals who enjoy good Indian food and there’s plenty of choice for vegetarians. Murgh tikka lababdar with a side of daal is a winning combination.

Have a pint in: Hop and Cleaver. Drop down to the Quayside and order a beer or cider in this rustic pub with flagstone flooring and an onsite microbrewery. If you enjoy smokehouse-style food, book a table and make a night of it.

Visit: Baltic Centre for Contemporary Art. A former flour mill on the opposite bank of the Tyne houses the multi-storey art gallery with regularly changing exhibitions by British and international contemporary artists. The restaurant on the Baltic’s sixth floor, Six, has outstanding views over the Millennium and Tyne Bridges.

Stop for coffee at: Pink Lane Coffee. Choose your brew according the estate where the beans were grown and if you’re hungry, go for one of the home-style cakes and pastries.

Shop: intu Eldon Square. The recently revamped shopping centre features high street stores and chain restaurants. For something special, head to the food hall of department store Fenwick to pick up a bottle of wine and gourmet snacks, including cheeses from Northumberland and artisanal bread.

A post shared by BALTICCentreForContemporaryArt (@balticgateshead) on Oct 12, 2017 at 8:10am PDT

Take afternoon tea at: Quilliam Brothers’ Teahouse. This cosy café opposite Newcastle’s Civic Centre serves teas and freshly-baked cakes and scones, including gluten free options. Head downstairs and cosy up in one of the leather sofas.

Visit: the Great North Museum: Hancock. Named after taxidermist John Hancock, this museum was built in the Victorian times to house a natural history collection. Animals, minerals and dinosaur fossils are still displayed alongside artefacts excavated from along Hadrian’s Wall.

Have an afternoon cocktail in: Bealim House. The bar and restaurant on Gallowgate is home to Newcastle Gin Company’s 400-litre still. Book in advance for tasting sessions or partake in a G and Tea, a gin-laced variation on afternoon tea. Alternatively, pop to the bar and order your favourite drink.

Dine out at: Peace & Loaf. Jump in a taxi to Jesmond, a couple of miles from the city centre, to dine at one of the region’s most acclaimed restaurants. Choose the tasting menu to sample a selection of chef Dave Coulson’s culinary creations or stick with the à la carte menu — it’s hard to go wrong with the chicken pie followed by a boozy sorbet. Craft beer fans can also try bottles from Newcastle’s Wylam Brewery.

Take a stroll: Walk along the Quayside to view stalls at the weekly Quayside Market, held on Sundays from 9am to 4pm beneath the Tyne Bridge. In recent years the market has been reinvented as a place to buy photos, reasonably-priced art and handicrafts from independent traders. If you’re hungry, there’s street food including German sausages and Thai noodles.

See: Discovery Museum. Set inside a building dating from 1899, this museum tells the story of Newcastle and the surrounding region. Exhibits encompass footage of 20th-century life in the city and industrial artefacts including the Turbinia, once the world’s fastest steam ship. A fascinating permanent exhibition, Charge! The Story of England’s Northern Cavalry, opened in October 2017.

Lunch at: Mr Petit. This restaurant on Old Eldon Square serves tapas-style plates inspired by global cuisines. A glass-fronted fridge holds a selection of craft beers to accompany dishes such as kedgeree arancini and lamb brik.

Drink in: Colonel Porter’s Emporium. Drop down Dean Street in the direction of the Quayside and choose from cocktails like brambles with a nettle twist, served at this off-beat bar.