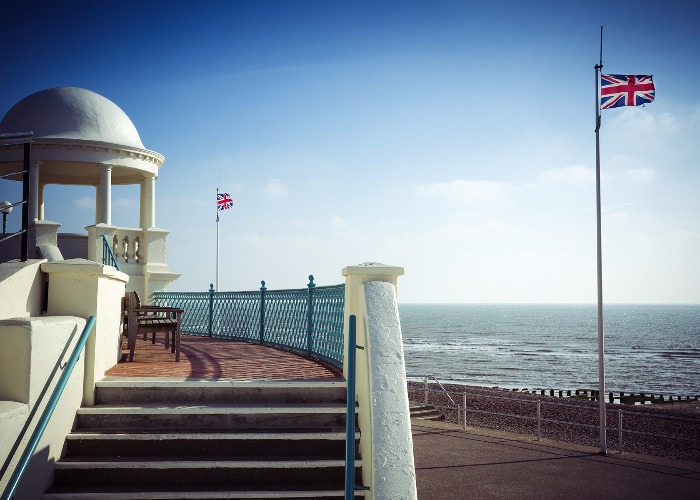 It seems that Britain’s south coast resorts are constantly reinventing themselves and shaking off the shackles of their reputation as fading seaside spots in decline. The burgeoning hipster credentials of the likes of Brighton, Hastings and Margate are already well documented, but here’s another, less well-trodden promenade that’s making a concerted comeback: Bexhill on Sea.

Like most of its maritime neighbours, Bexhill owes its place on the map to the Victorian railway boom in the 19th century, iconic architecture and a lovely long stretch of beach, which reveals sand at low tide.

There’s a tranche of tempting gelaterias and Italian and seafood restaurants, plus some seriously unique cultural attractions. Even the local Wetherspoons looks smarter and grander than it rightfully should – it once served as the grand Picture Playhouse, opened by the Duchess of Norfolk in 1921.

Did you know that Bexhill is the birthplace of British motor racing? #heritage #bexhill #motorsport #seaside #culture

Bexhill is the perfect place for bargain hunters who love fossicking about in its 20-plus charity, antique, vintage and independent record shops, with names like Stuff and Nonsense in the Big Egg which speak to their character.

A strong community vibe radiates from the town, and it still very much feels like a place where the locals outnumber the daytrippers. But that they might not always be the case, so make sure you plant a flag in the mudbanks before the crowds inevitably catch on and make the most of this guide to achieve ‘peak weekend’ in Bexhill.

Check in at: The Driftwood. Opened in 2017, the Driftwood comfortably surpasses expectations of what you might expect from a B&B. From the welcome coffee and complementary beers stocked in the mini fridge, to the luxurious Bown of London dressing gowns, every little detail has been executed with evident TLC. Rooms are decked out immaculately in Manhattan loft style with beautiful furnishings and quirky details like colourful Asian statuettes and stylish, retro ViewQuest DAB radios that blend in perfectly with the high design aesthetic. Oh and it’s two minutes’ walk from the seafront. It’s hard to imagine a better place to lay your head down.

Admire: The architecture. Simply put, Bexhill offers some of the finest, best preserved seaside architecture on the south coast. Stroll along the Parade and feast on the architectural eye-candy, including the whitewashed, two tiered, twin domed Colonnade, with a mini shopping arcade of tasteful giftshops below, the old red and white bandstands and shelters. Look out for the row of intriguing low-level, pavilion-style cottages nearby too.

Eat at: Athena’s Fish and Chips. This place is legendary for fish so fresh it’s liable to leap up and pinch your bottom. It comes lightly battered and sprinkled with parsley alongside piping hot chips and homemade tartar sauce.

Drink in: The Denibgh to enjoy cosy fires, well-conditioned ales and an award-winning beer garden with a massive, dramatically sprouting tree trunk, which all make this friendly watering hole a sure-fire winner.

Explore: Head east along the marina towards the attractive horseshoe beach, passing rockpools, tinkling catamarans and colourful beach huts. You can’t miss the striking iron sculpture of the motor car which commemorates Bexhill’s heritage as the birthplace of British motor racing.

You might also notice a handsome Victorian building that’s now a retirement home but was once the Sackville Hotel. Here the likes of Daily Mail founder Lord Northcliffe, Alfred Dunhill, and Louis Renault all stayed after racing their jalopies along De Le Warr Parade in 1902. That same year, Bexhill was incorporated as a Borough by Royal Charter, marking the first time a Royal Charter had been delivered by motorcar.

Stop for a Mister Whippy at the Old Bathing Station Café along the way. Hey, you’ve earned it, and this cute little hut is a lovely place for a pit stop.

Shop: Like a local. Even if you don’t need new brogues, pop into C Wells & Sons simply to admire the incredible stained glass windows in Sussex’s oldest shoe shop. Then do a bit of record spotting at exemplary indie music shop Music’s Not Dead and check out the retro nick-nacks in Purrfect Vintage or Sweetpeas and Doris.

See live music at: The De La Warr Pavilion. Frankly this modernist masterpiece of a building is reason enough to visit Bexhill. With its curved contours, helix staircase, sun terraces and avant garde bandstand, it packs a hefty punch. It’s an eminently civilised place to see a gig, with a surprisingly affordable bar, but make sure you come back in the daytime to take in an art exhibition – and lots of pictures of course.

Visit: Bexhill Museum, which packs a lot of eclectic history into its few floors. Look out for the models of the De La Warr, its abandoned pier and the demolished Kursaal entertainment hall (forerunner of the DLWP), the eccentric "Easter Egg Car", and perhaps the best and most bizarre exhibit of all: Eddie Izzard’s family train set no less!

The brightly painted clocktower outside is a real treat too, resembling as it does a giant lemon and mint choc chip ice cream cone. Afterwards, take a lazy amble around the charming Egerton Park and enjoy its duck pond, boating lake and Olympic-themed children’s play area.

Brunch at: Rocksalt-on-Sea. This quirky but reliable brasserie offers live music, with cosy booths and walls decked out in rock and roll paraphernalia.