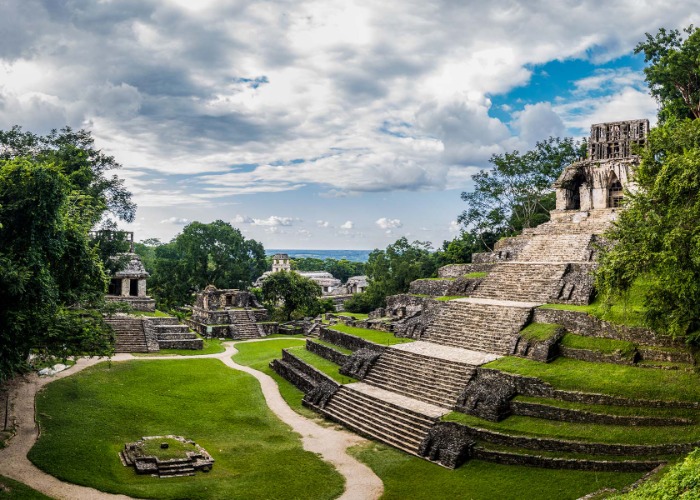 Whether you're a history fan or just like learning about other cultures, Mexico’s archaeological sites are among some of the best in the world.

With 180 archaeological sites all over the country, Mexico offers a vast and intriguing history for visitors to explore. From temples nestled on the coast of the Caribbean Sea to an ancient city full of secrets, the Olmecs, Toltecs, Aztecs, Zapotecs, Mixtecs and Mayas left a permanent mark on the Northern American nation. Here are five totally unmissable sites.

Little is known about the fascinating civilisation that inhabited this pyramid city in a green valley in Central Mexico between 100 BC and AD 650, but what we do know is that Teotihuacán was a political, economic and cultural centre in Mesoamerica with over 150,000 residents living in this metropolis.

When Aztecs stumbled upon the ruined pyramid city in the 1400s, they were so impressed by their finding, they named it 'the place where the gods were created'. Archaeologists have been exploring the site for over a century but only 5% of the ancient ruins have been excavated – the three-mile-long (5km) Avenue of the Dead, which begins at the 157-foot-tall (48m) Pyramid of the Moon and leads you all the way past the 207-foot-tall (53m) Pyramid of the Sun, is incredibly impressive.

Just 31 miles (50km) from Mexico City, it's easy to hop on a bus and you'll be discovering the mysterious site within a couple of hours. If you want to delve deeper into the fascinating history of Teotihuacán, a tour guide is the way to go (between £35-£60, depending on the duration and group size), but if you just want to marvel at the impressive structures, you can explore the site on your own too. 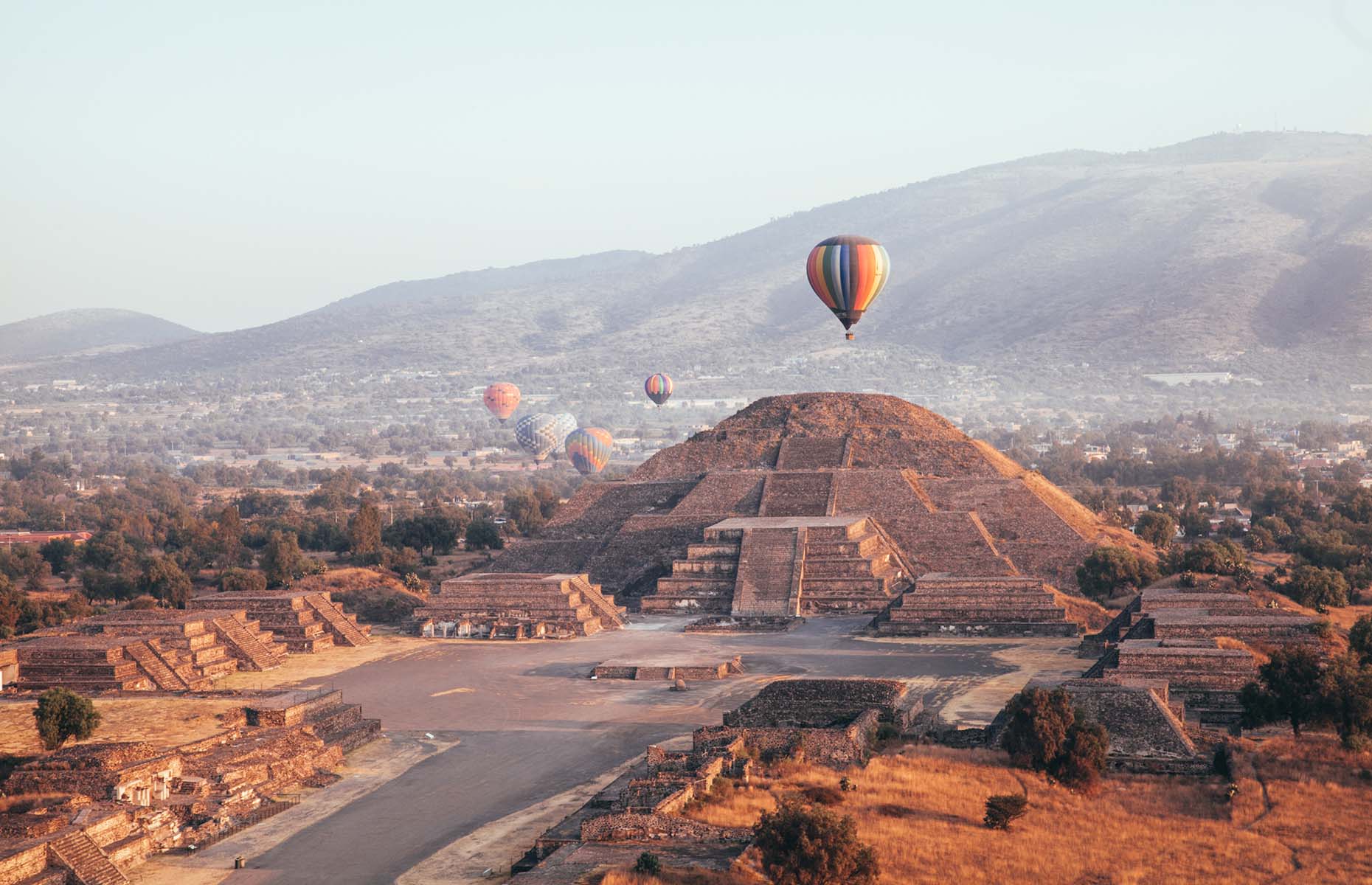 Right in the heart of Mexico’s capital, visitors can find ruins of a once impressive Aztec temple that was destroyed by Spaniards to make way for the Metropolitan Cathedral. Located at the footsteps of the Christian monument, Templo Mayor wasn't uncovered until 1978 when electricity works revealed an ancient stone disc engraved with an image of the Aztec goddess Coyolxauhqui. Modern structures were demolished to excavate the incredible temple and its surrounding buildings.

According to stories and legends, Templo Mayor stands at the exact spot where the Aztecs saw an eagle sitting on a cactus with a snake in its beak, a symbol which is now featured on Mexico's flag. For the ancient civilisation the site symbolised the universe's centre.

Two pyramids used to tower over the site, the ruins of which can still be explored by visitors today. But the most interesting (and slightly morbid) discovery was made in 2017, when a tower built from over 650 human skulls was found just next to Templo Mayor. Surprisingly, the sacrificed remains also included women and children.

You'll find the entrance to the archaeological site and the museum (tickets £3.65) next to the excavations, across the busy Plaza del Templo Mayor. Discover the rich history by yourself or book an on-site tour guide with tickets starting at £9.50. 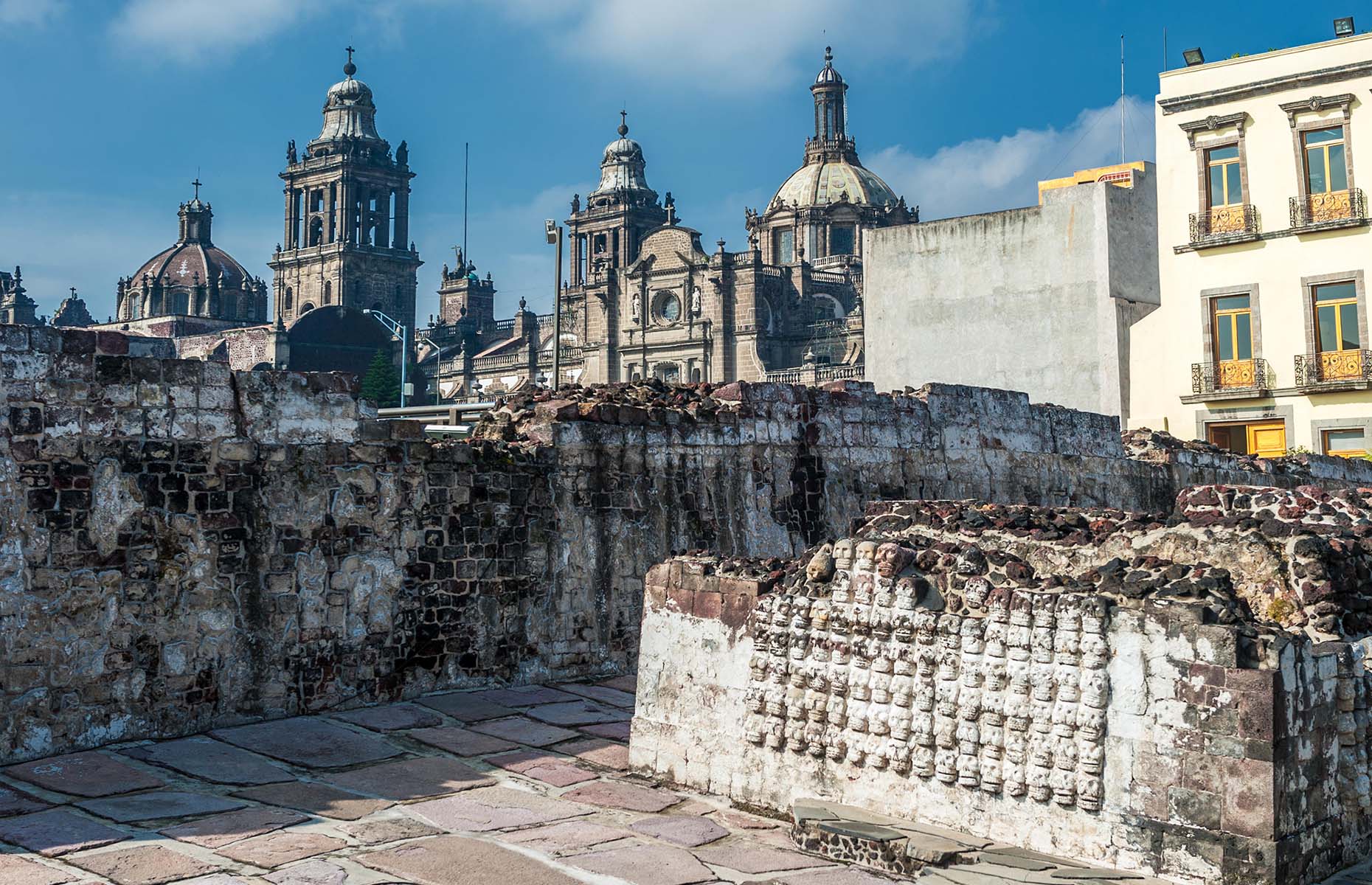 READ MORE: 30 unmissable things to do in Mexico

With the azure Caribbean sea for a backdrop, this ruined Mayan city is among some of the most beautiful and unique in the world – in fact, it's the only archaeological site in Mexico overlooking a beach. Tulum's location was perfect for a Mayan seaport fortress, with steep cliffs guaranteeing protection from land while the three remaining sides were enclosed by limestone walls.

Tulum’s location created an ideal spot to build a seaport fortress for the Mayan civilisation. Even though it's smaller than other sites around the country and was home to only around 1,600 people in its heyday, it was an important trading and religious centre, with all sorts of goods from turquoise and jade to cacao beans and axes, passing through it.

Nowadays, visitors can easily explore the impressive stone structures, such as El Castillo, the Temple of the Frescoes and the Temple of the Descending God on the site's small paths surrounded by tall palm trees and prickly cacti.

Located 80 miles (128km) south of Cancun or 39 miles (62km) south of Playa del Carmen, Tulum Ruins can be reached by buses that cost around £3.50 one way (from Playa del Carmen) or by rental car with a scenic drive along the coast. Tickets to the ruins are £3 and should be purchased at the entrance to the site itself – avoid buying them from touts in the car park. You only need to set aside around an hour to tour the ruins and a guided tour isn't necessary as the sights are well signposted with information and history in both English and Spanish. 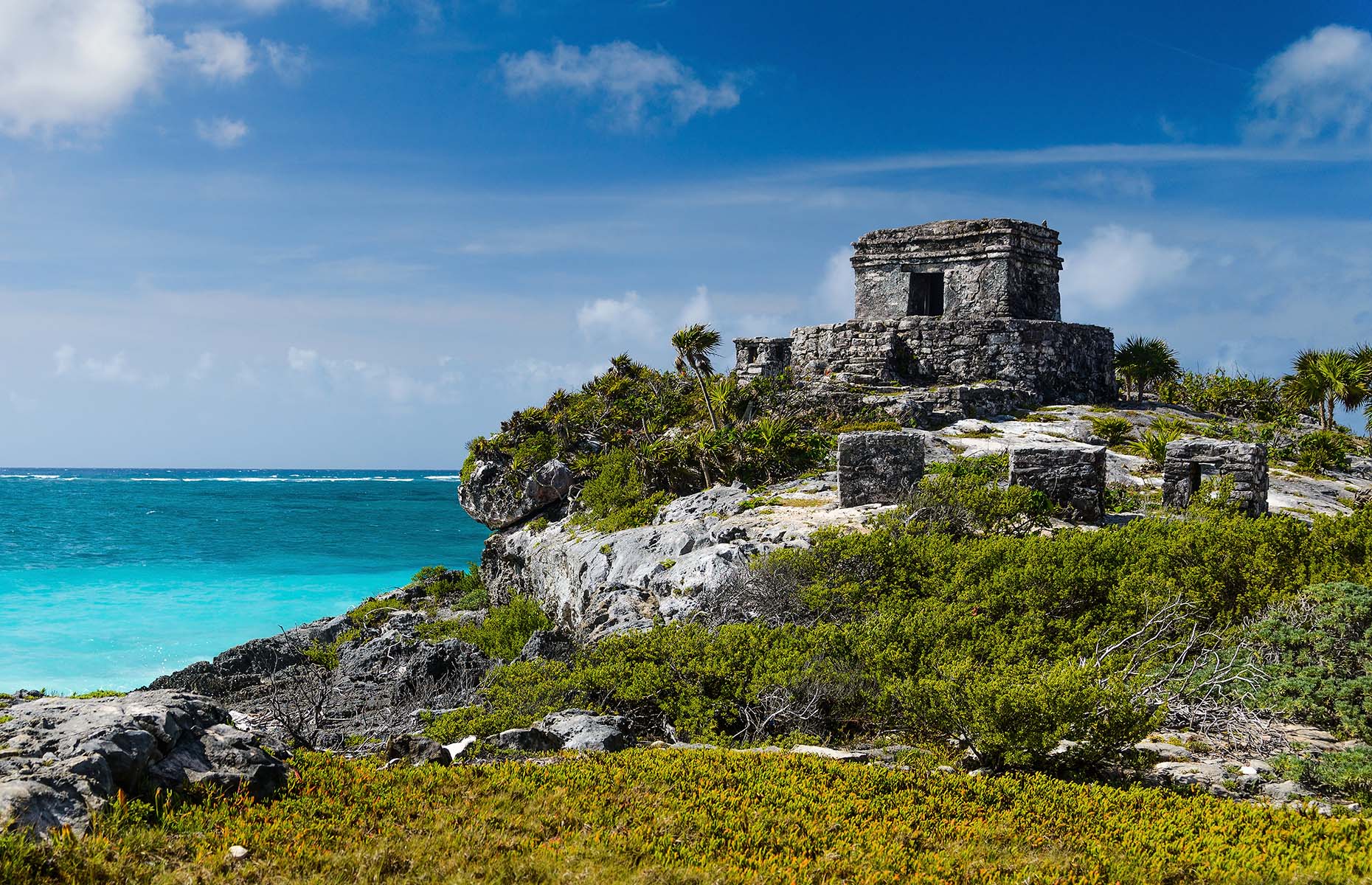 As one of the most well known archaeological sites in Mexico and one of the New 7 Wonders of the World, Chichén Itzá is a must-visit.

By the ninth century, Chichén Itzá acted as an important centre for trading and became the Yucatan peninsula capital, with around 50,000 residents in its heyday.

The ruined city's main sight is the 98-foot-tall (30m) pyramid temple, El Castillo, which is impossible to miss. Don't be puzzled by visitors clapping in front of it – it's a fun trick which creates echoes around the pyramid that mimic the sound of the local quetzal bird.

Just to the left side of the pyramid lies the world's largest ancient ball court, where it's believed that the winning team's captain was decapitated – an honour for the Mayas. The game features two teams where the athletes try to put a ball into stone circles without using their hands or feet.

It's well worth booking a guide once inside the park (around £25.50) to learn more about the ancient structures and Mayan cultural practices. To arrive in Chichén Itzá by bus, you can take the Mexican ADO Bus Service from Cancun (3h) or from Valladolid (1h). If you are getting around the area by car, it's easy to reach the site from Cancun (2h 30mins), Playa del Carmen (2h), Merida (1h 30mins) or Valladolid (45mins). The entry to Chichén Itzá costs £24.40 for an adult ticket. 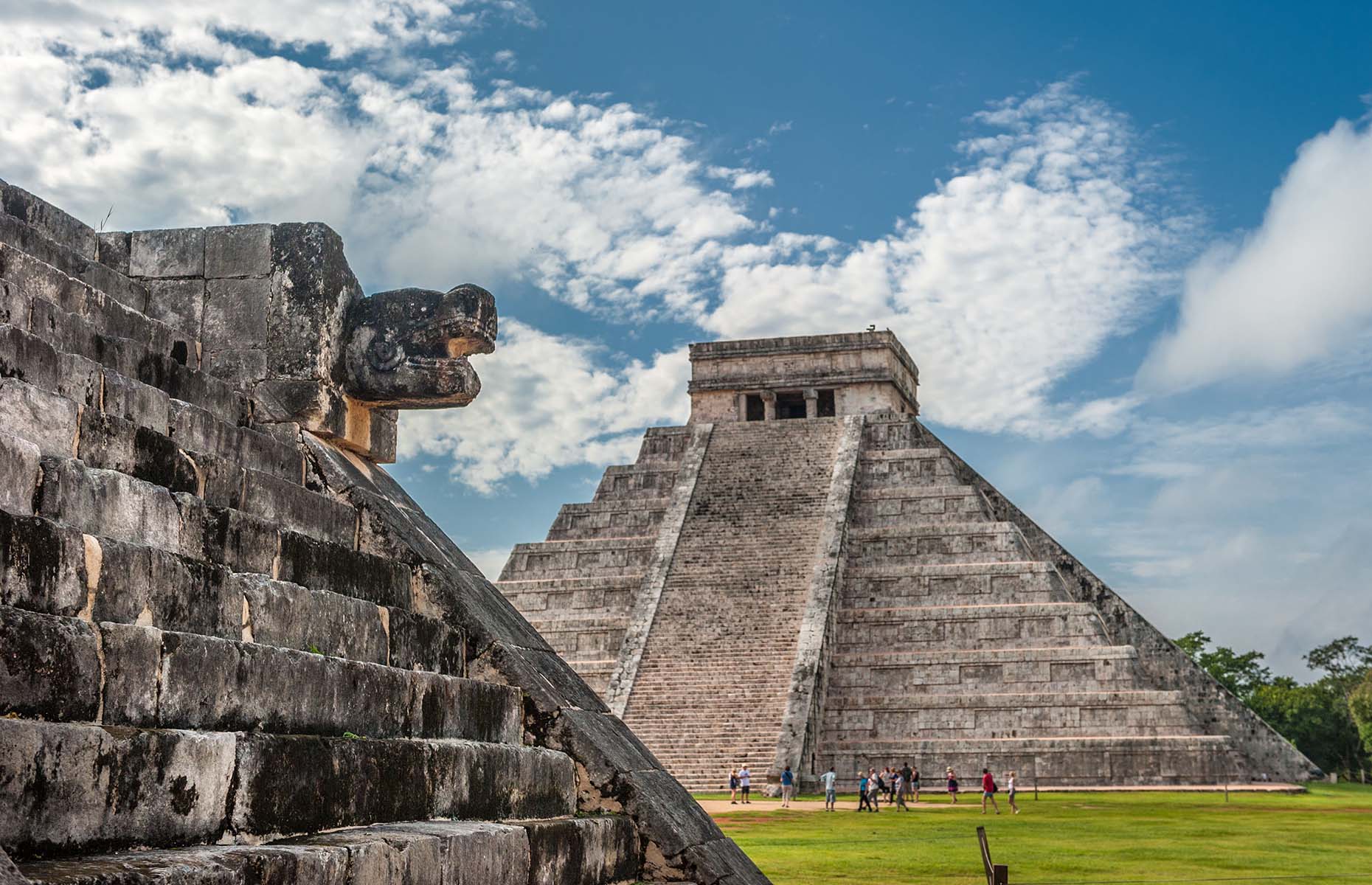 When Spaniard Pedro Lorenzo de la Nada first stumbled upon this Mayan city in 1567, it had already been abandoned by its ancient inhabitants. Almost 500 years later, Palenque has become one of the most popular archaeological sites in Mexico. The temples, plazas and other stone structures are hidden deep in a tropical forest and were originally adorned with blue and red detailing, some of which remains visible to this day.

Thanks to hieroglyphics at the site, researchers were able to uncover incredible details about Maya culture. Although you can discover the verdant site by yourself, learning about the rich history and culture is best done with the help of a local tour guide, many of them waiting at the entrance of the archaeological park. Currently only 5% of the total city has been excavated, leaving many stones of the Mayan civilisation still unturned.

To get there you can either drive to the park’s entrance with your car or take one of the many buses departing from bigger cities all around the country, such as Villahermosa (2h 30mins), Cancun (13h), Merida (10h), Mexico City (16h) or Playa del Carmen/Tulum (12h). You can make a trip within a trip out of your visit by spending the night at one of the charming hotels surrounding Palenque, such as Boutique Hotel Quinta Chanabnal.

The entrance to the national park will set you back £1.50, while the entry to the site itself costs another £3.20. Tour guides for a small group (5-7 people) are priced approximately at £68.50.