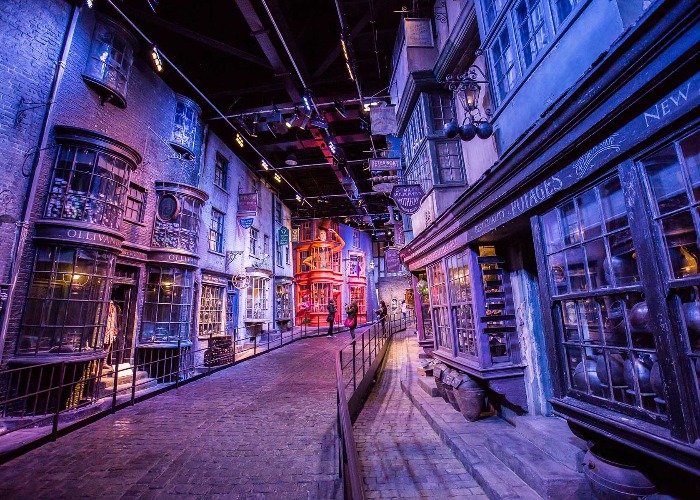 If you know your muggles from your mudbloods and your dementors from your Death Eaters, then you’ll know it’s Harry Potter’s Birthday on 31 July (as well as author JK Rowling’s). Join in the celebrations at one of the many worldwide HP attractions.

Although it’s been 15 years since the final book and 11 since the last film, the magic lives on and Potterheads can’t get enough of Rowling’s wizarding world.

Indeed, some people still find it hard to accept that an owl hasn’t delivered their Hogwarts letter, so here is the next best thing – a list of 15 spellbinding destinations around the globe (one for each year since the Deathly Hallows book was released) where fans can celebrate the teenage wizard’s birthday (and beyond).

All eight Harry Potter movies were filmed at Leavesden Studios, so most of the cast’s time was spent behind these walls. Luckily, after filming ended, all the props, costumes and trinkets stayed behind, and Warner Bros Studio created an award-winning experience bringing the wizarding world to life.

Every day, up to 6,000 visitors take a tour to see Dumbledore's office and indulge in experiences like Wand Choreography Interactive. New for this summer (July-September) is Mandrakes and Magical Creatures, which shines a light on how your favourite creature effects were brought to life using scale models and CGI in the Creatures Workshop.

Meanwhile, in winter (November-January), you can explore Hogwarts in the snow, as the Great Hall is transformed with the icy silvers of the iconic Yule Ball scene.

If you’re after pure indulgence and showmanship head to America, Japan or China to experience The Wizarding World of Harry Potter at Universal’s four parks (the US has two). You can explore Hogsmeade and Hogwarts, walk down Diagon Alley, take a ride on the Hogwarts Express, let the wand choose you at Ollivander’s, eat a chocolate frog and drink a pint of butterbeer. Plus, there are pulse-pounding rides like Harry Potter and the Forbidden Journey, Hagrid’s Magical Creatures Motorbike Adventure and Flight of the Hippogriff (pictured). 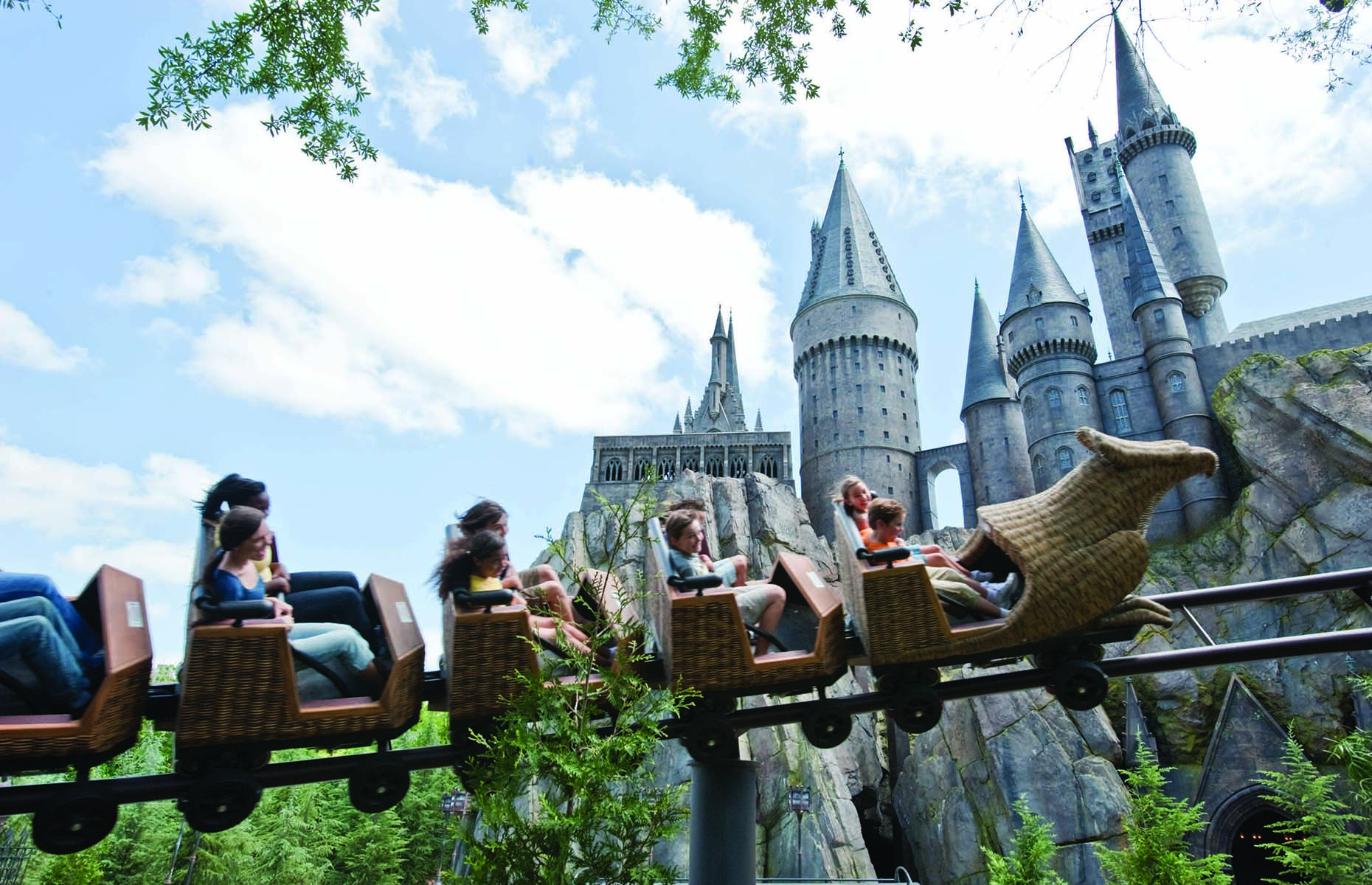 The Wizarding World of Harry Potter

This groundbreaking touring exhibit travels all over the world to allow Potter fans to view 15,000-square-feet (1,393sqm) containing thousands of authentic costumes, props, creatures and sets from the movies. You’ll get to see elaborate recreations of sets like the Gryffindor common room and dormitory as well as the Forbidden Forest.

You can even test out your skills in the Quidditch area, brew a potion and pot a mandrake to earn points for your house. It is currently being staged in Philadelphia in the US until September, before moving onto Vienna, Austria.

Home to mysterious curses, strange creatures and the site of an iconic confrontation between Harry and Voldemort, author JK Rowling has stated the Forbidden Forest as her favourite part of the Hogwarts grounds. Although Albus Dumbledore said that it was “out-of-bounds to students,” you can defy the professor’s orders and head deep into the dark forest.

Returning to Arley Hall & Gardens (15 October 15- 6 November), the Forbidden Forest Experience allows visitors to travel along a luminescent pathway and relive classic moments from the books and movies, as well as meeting fantastic beasts from the wizarding world. There are models of Hagrid and his pet boarhound Fang, as well as Ron’s flying Ford Anglia and Aragog the Acromantula.

READ MORE: These are the most magical places on Earth 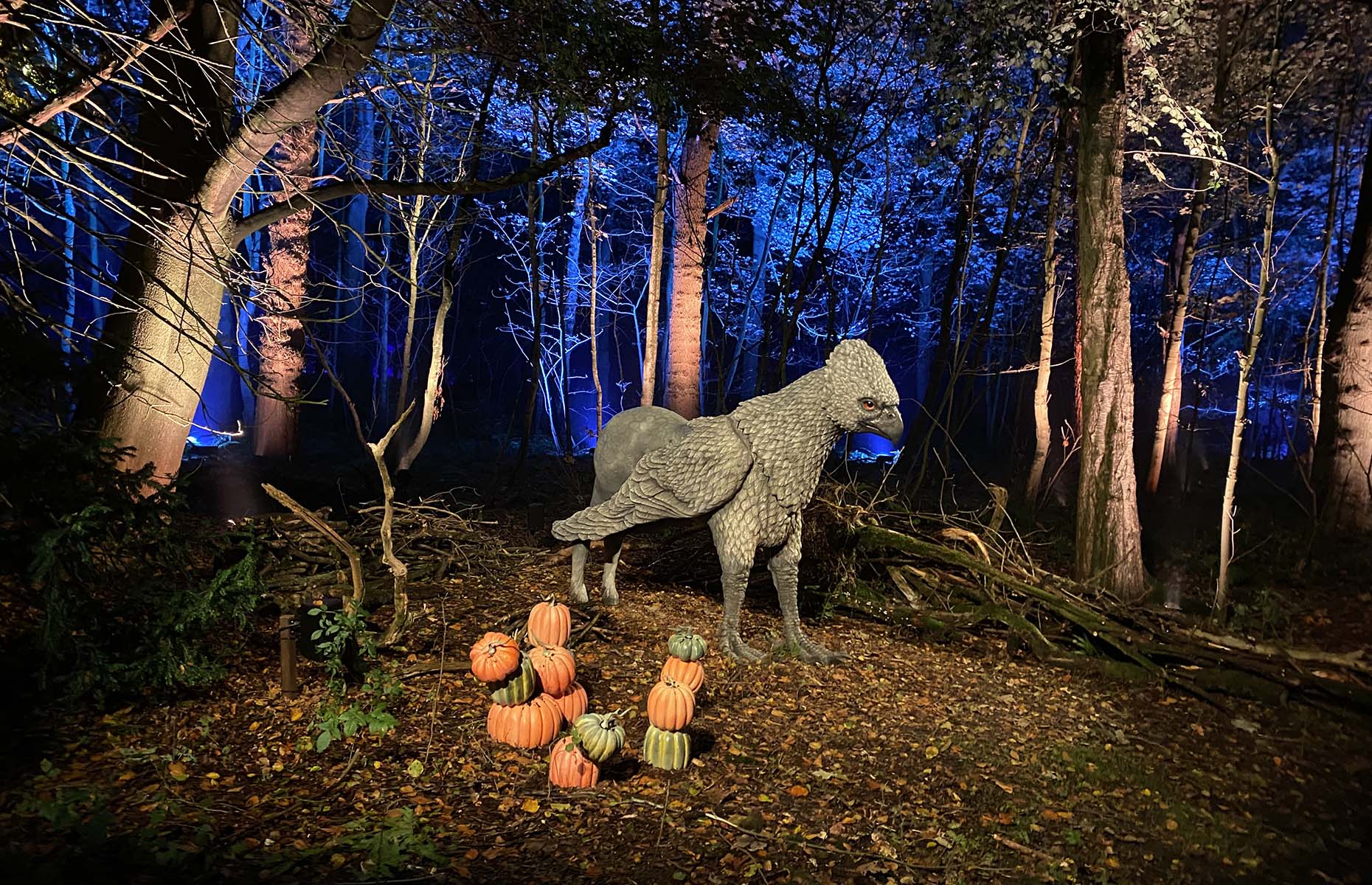 Over the next two months, audiences around the world will be able to experience full films from the beloved series, projected in HD on a 40-foot (12m) screen, while a full symphony orchestra performs the unforgettable scores live. The concert series will be live in cities including Vienna, Philadelphia, San Diego, Saratoga Springs, Tel Aviv, Bethel, Wantagh, Perth, Baltimore and San Francisco. 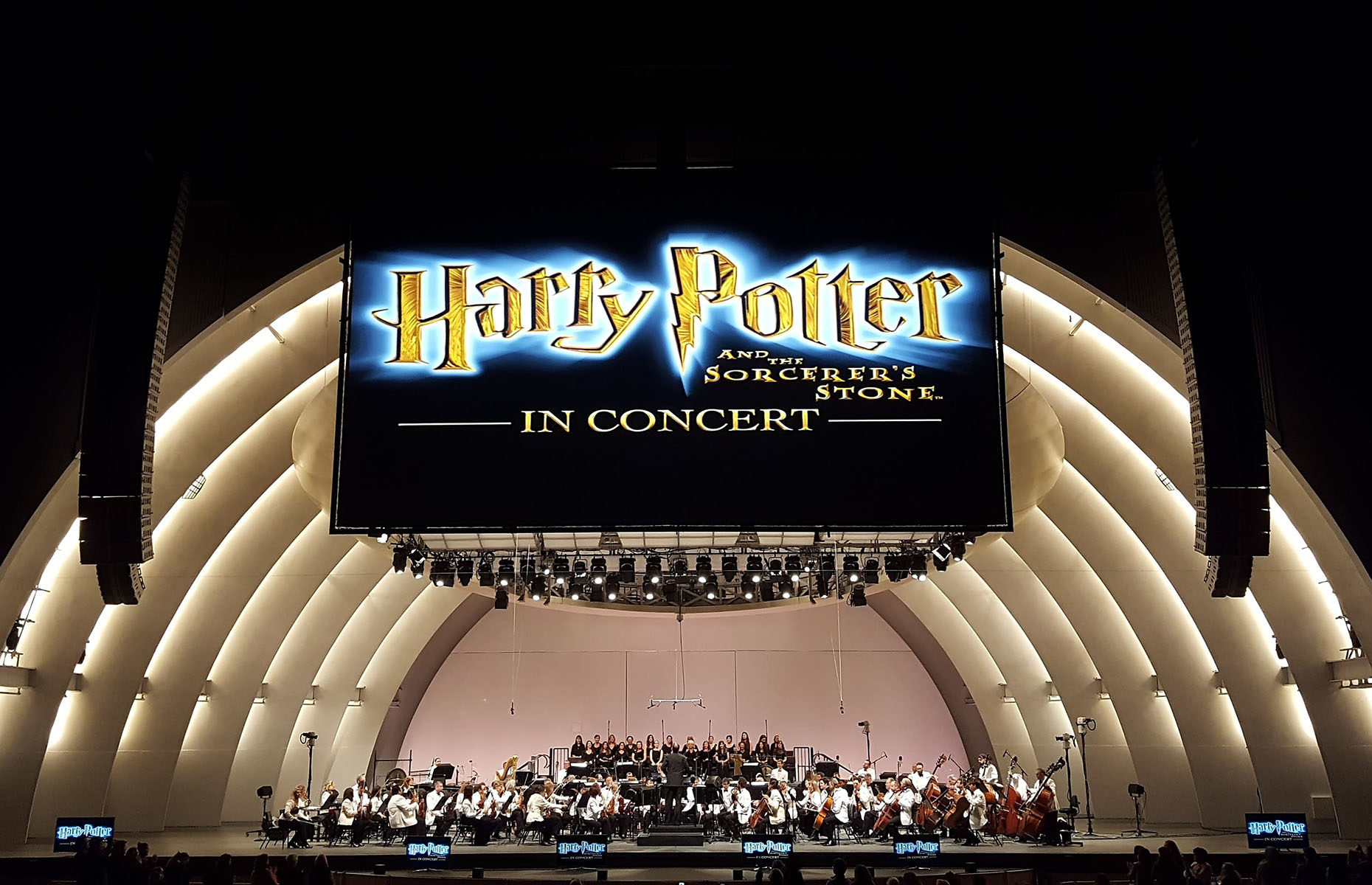 Housing iconic production stills, the Photographic Exhibition takes fans behind-the-scenes of key moments in the film series, from Harry’s first day at Hogwarts through to the Battle of Hogwarts.

Located in Covent Garden, it is home to London’s only bottled butterbeer bar, and fans can enjoy the wizard’s drink of choice in a souvenir tankard or take a bottle away to enjoy at home.

Plus, you get the chance to experience green-screen technology and ride a broomstick over London just like the cast did during filming, and become a member of the Ministry of Magic by having your photo put on an official identification card. 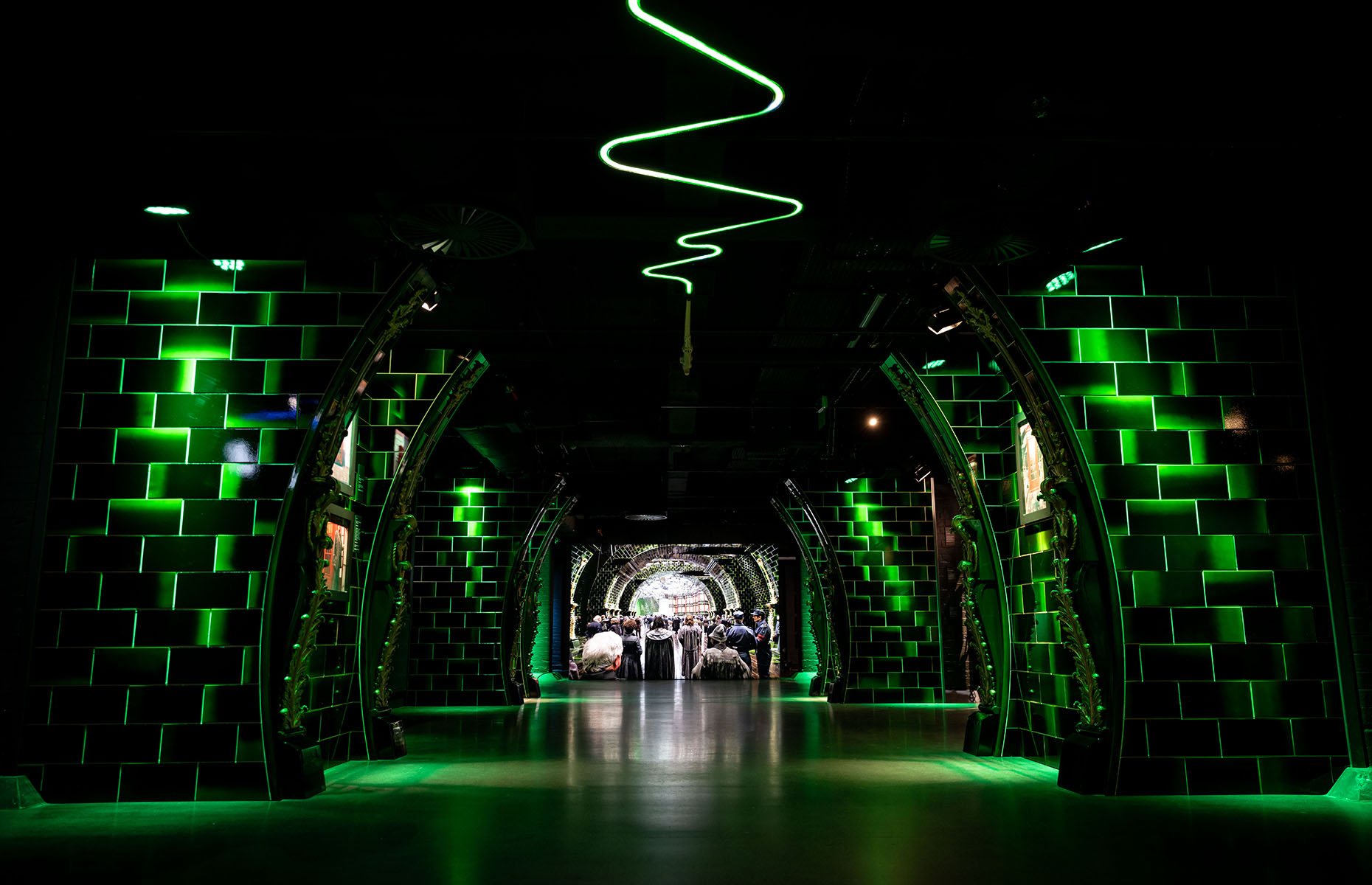 “Nine and three-quarters? Think you’re being funny, do you?” What was once believed by a conductor to be a prank is now a top tourist attraction. At King’s Cross Station, not only will you locate Platform 9 ¾, but you’ll also find a shop where you can stock up on Harry Potter merch. And don’t forget to get your picture taken with the famous luggage trolley halfway into the Hogwarts Express station. 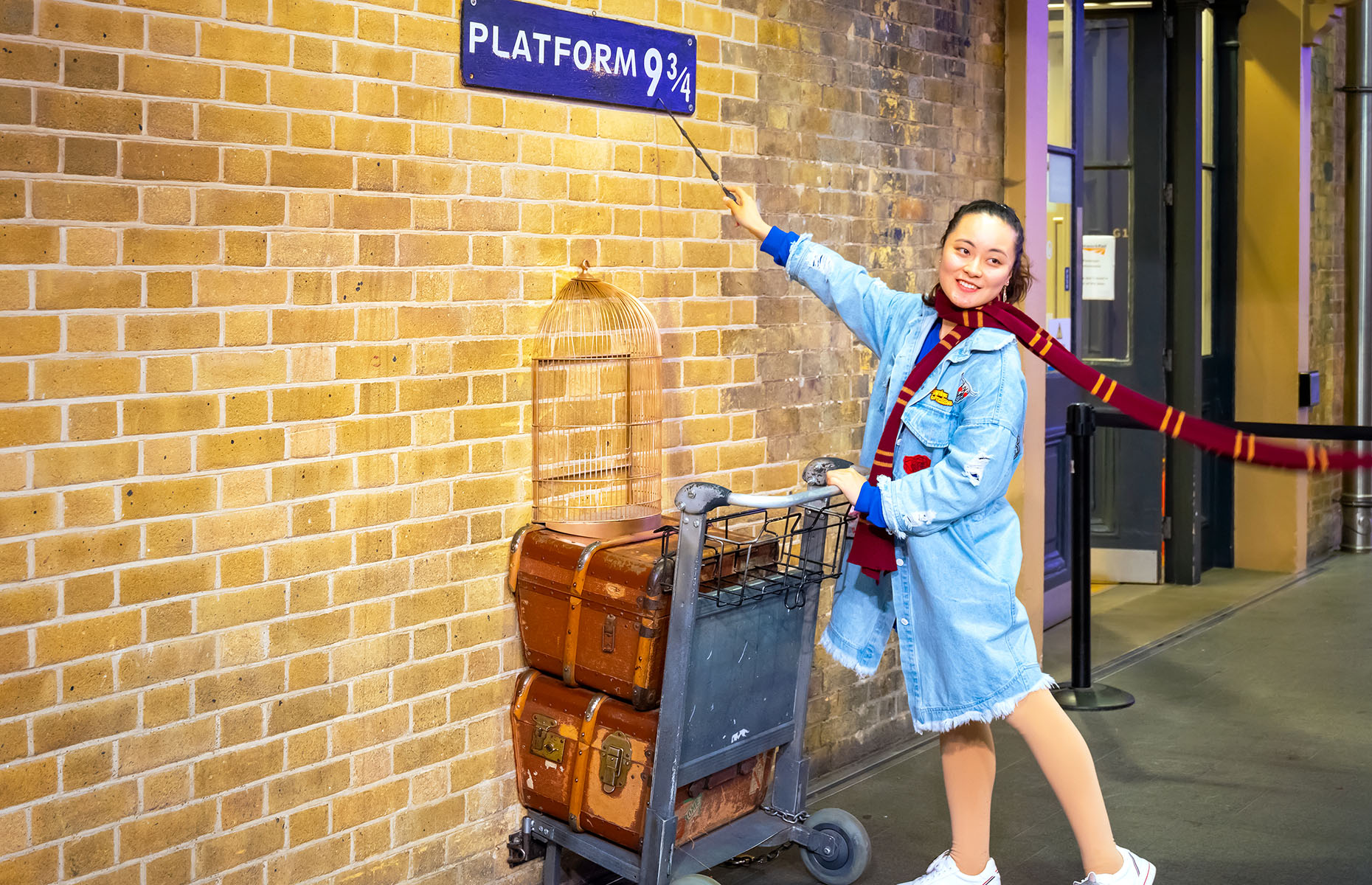 If you don’t want to wait in line to take a picture, go late at night before you head out on your own magical journey. Also in London is Leadenhall Market, the location of some of the Diagon Alley scenes. It houses the shop used as the entrance of the Leaky Cauldron from Harry Potter and the Goblet of Fire.

JK Rowling started writing Harry Potter at a time of great financial strain as a single mother. Although The Elephant House isn't the actual birthplace of Harry Potter, it's still a major tourist attraction, as the author would come to this precise location to pen the fantasy world.

Make sure you take a marker to the bathroom where you can even leave your own message on the walls, alongside countless other fans who have scribbled their thanks to the author. There's a café too, which is open from 8am to 10pm every day of the week, 11pm on Fridays and Saturdays.

Rowling completed the final book of the series, Harry Potter and the Deathly Hallows at Balmoral Hotel in Edinburgh. You can book the JK Rowling Suite, with a package that includes a private tour and Harry Potter-themed cocktails, starting at £2,500 per night.

While you're in Edinburgh, check out the inspiration for Diagon Alley – Victoria Street and Candlemaker Row. These two adjacent cobbled streets, not far from Elephant House, are colourful, historical and just the sort of place you can imagine going for your Hogwarts robe-fitting. The most famous shop on Victoria Street is Robert Cresser’s brush shop. Established in 1873, it is thought to be the inspiration for Ollivander’s Wand Shop.

Meanwhile, Candlemaker Row originally functioned as the epicentre of the city’s candle-making industry, and it now has a Diagon Alley plaque and mural.

READ MORE: 8 of the most haunted places to visit in Edinburgh

As much as Potter fans want it to be, Hogwarts isn’t a real place, so when the crew were filming the Harry Potter movies, they scoured UK locations to piece together the ideal castle. One of the places used in the Philosopher's Stone and the Chamber of Secrets was the 11th-century Alnwick Castle in Northumberland. These grounds are where Harry and his friends were taught the rules of Quidditch in the Outer Bailey and learned to fly their broomsticks with Madam Hooch. 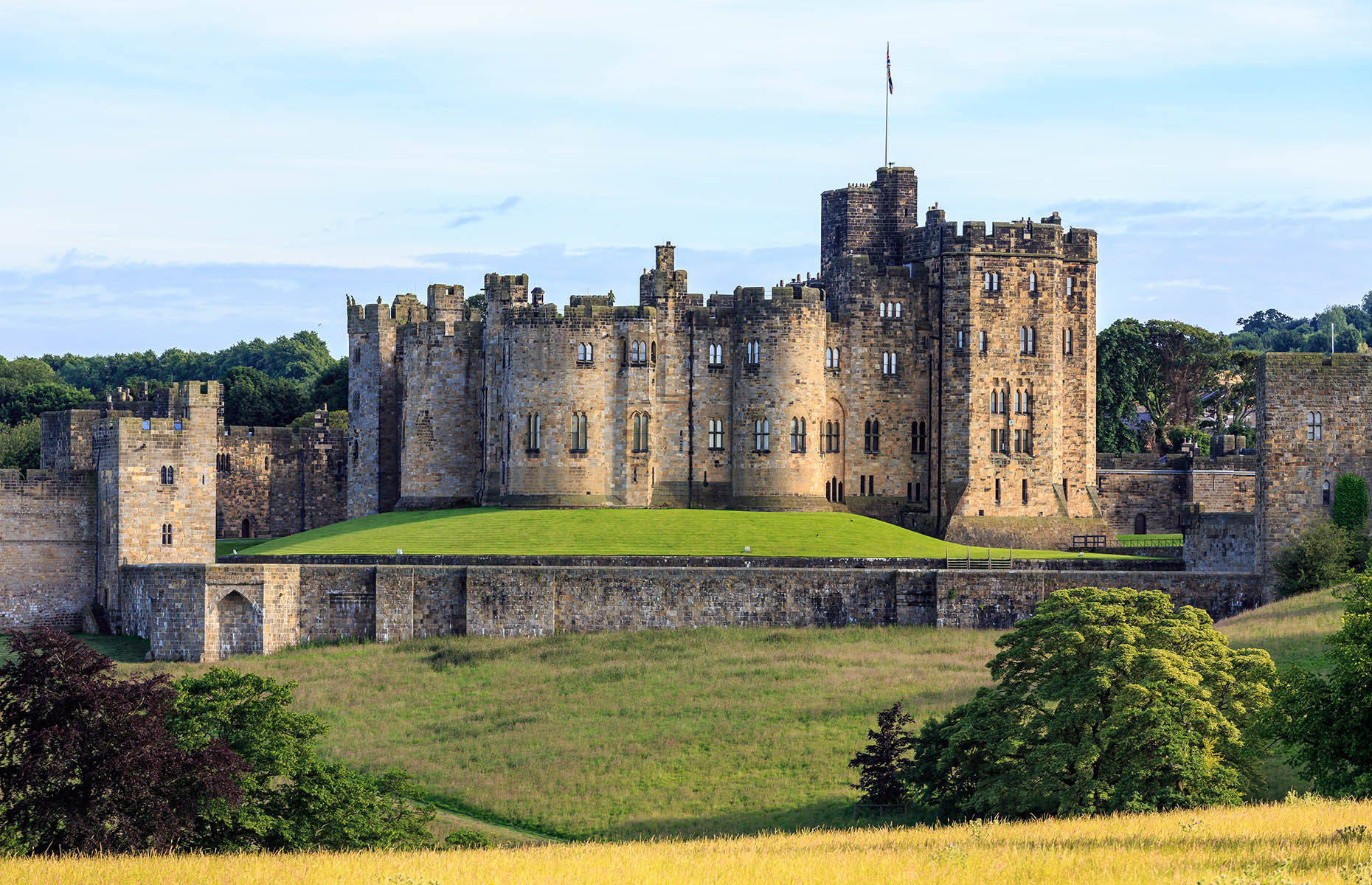 Filming also took place at Durham Cathedral and Christ Church College, Oxford University – the latter was used for the Great Hall, and is home to the staircase where Professor McGonagall first met Harry, Hermione and Ron. If you want to visit the interior of the castle, then you will have to make your way to Gloucester Cathedral – the Gothic corridors doubled as the inside of Hogwarts for the first few films.

True Potterheads will go to the trouble of travelling to the suburbs to visit Harry’s childhood home. No.4 Privet Drive was where we first met Harry and the unpleasant Dursley family, but technically, the home for the movies was filmed in Bracknell, Berkshire. Warner Bros only used the house for the first Harry Potter film, but you’ll still find the crowds taking their pictures next to the Privet Drive sign and at the brown-bricked 12 Picket Post Close in Martins Heron. When the house went up for sale in 2016, it sold to a muggle buyer for £200,000 above the asking price.

The Glenfinnan Viaduct is the archway bridge that the Hogwarts Express crosses on the way to the wizarding school. The Jacobite Steam Train runs twice a day from Fort William to Mallaig, and not only crosses the ‘bridge to Hogwarts’, but also goes past Britain’s highest mountain, shortest river, most westerly station and deepest sea loch. 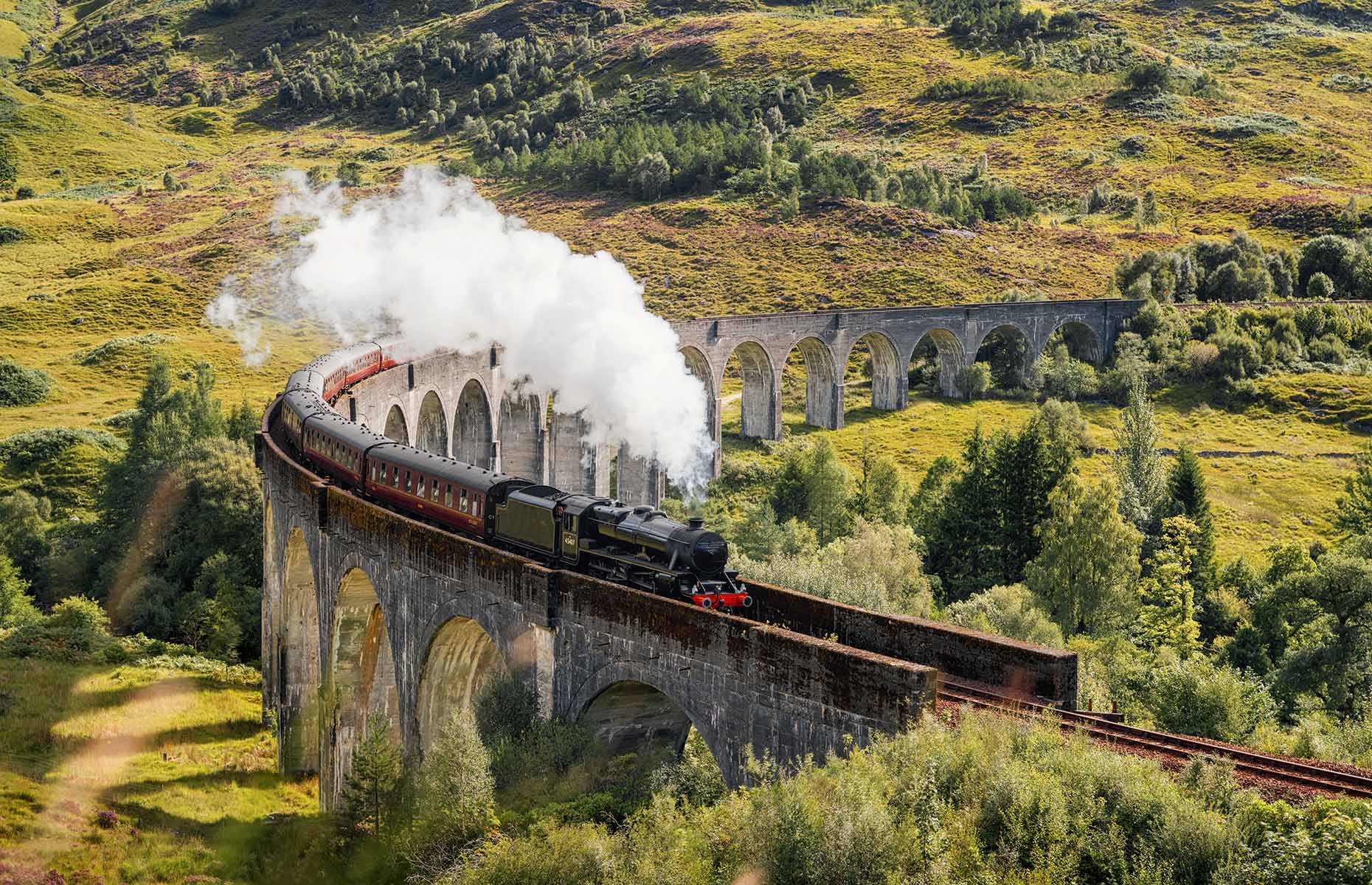 Although you won’t see Ron’s blue Ford Anglia flying above, the scenery is just as impressive as it was in the movies. The charming Goathland Station, on the North Yorkshire Moors Railway, was the settling for Hogsmeade Station in the Philosopher's Stone film.

Not only is it the world’s oldest scientific zoo and popular tourist attraction, London Zoo is also a key destination for Harry Potter fans. In was here, in the Reptile House, where the boy wizard discovers his ability to speak Parseltongue for the first time. There is an official plaque beside the snake enclosure, so you’ll know if you’re standing exactly where a baby-faced Daniel Radcliffe stood while conversing with a Burmese python. The actual zoo from the books doesn't have a name, but it is said to be a fictitious zoo in Surrey. 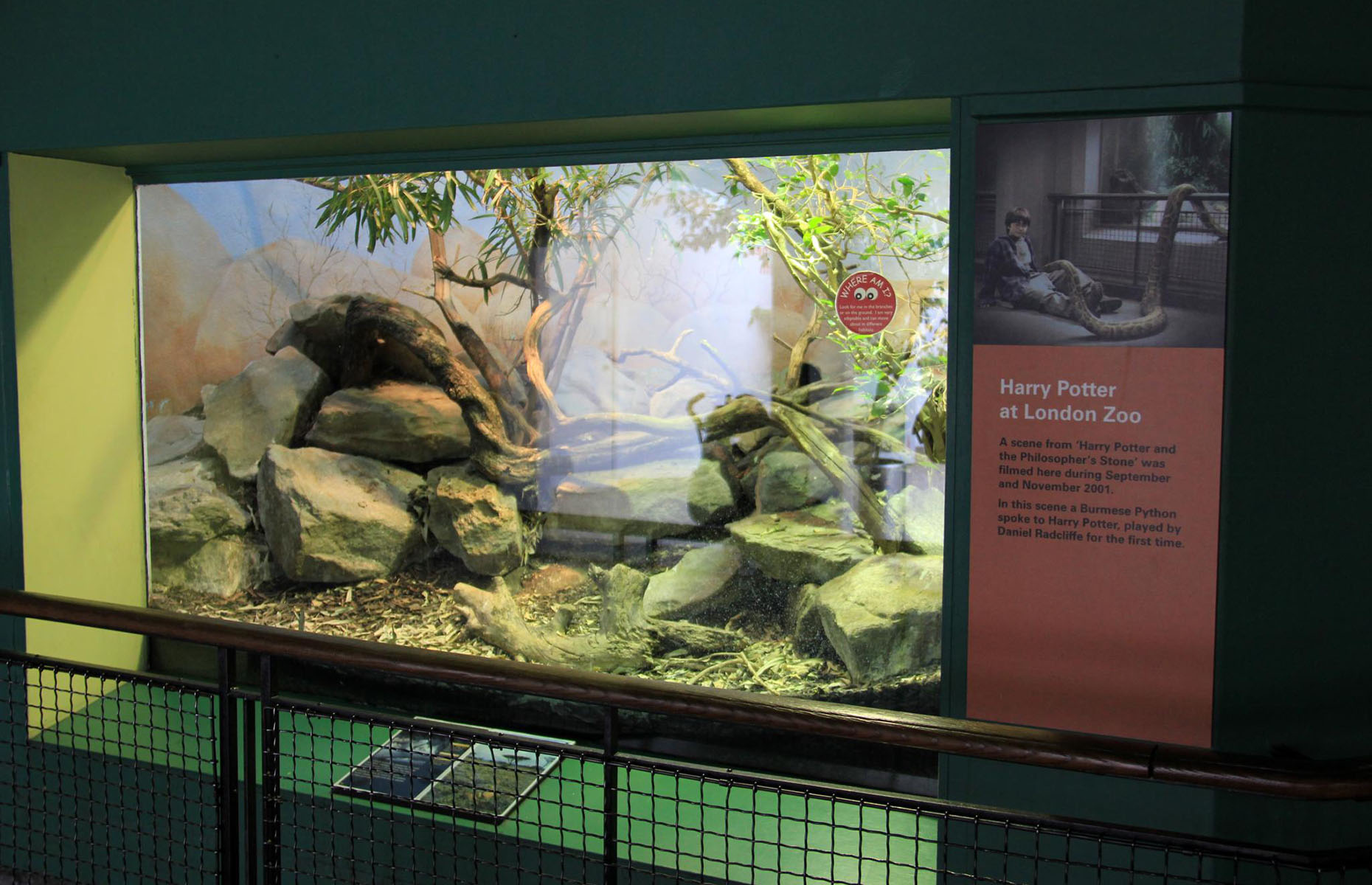 Although not an official Harry Potter attraction, the College of Wizardry uses a medieval castle to make your dream of becoming a witch or wizard come true. Here, you can be part of a huge four-day/three-night live-action role-playing experience, attending magical arts classes with like-minded individuals and living in one of the Houses of Czocha Castle.

You will go to class, explore secret passageways, head out onto the castle grounds and face mystical beings. From 20-23 October, headmistress Dorothy Goodwand, affectionately known as ‘Granny Dot’, will be welcoming a new batch of students to the 24th Classic College of Wizardry: Folklore & Fairytales weekend.

Another magical-themed attraction, albeit with no official connection to JK Rowling’s series, is The Wizard Chamber at the Georgian House Hotel. The family-run 19th-century B&B’s faux-castle aesthetic ties in perfectly with a world of wizards and witches, with stained glass windows, stone walls, archways, trunks, cauldrons, four-poster beds hung with velvet tapestries and an abundance of other curious artefacts.

The special Wizard Chambers can only be accessed from behind a secret bookcase in a portrait-lined passageway bathed in candlelight. The Wizard Potion Making Experience, which includes two cocktails or mocktails, is available to book every Saturday-Sunday from 5-6pm.