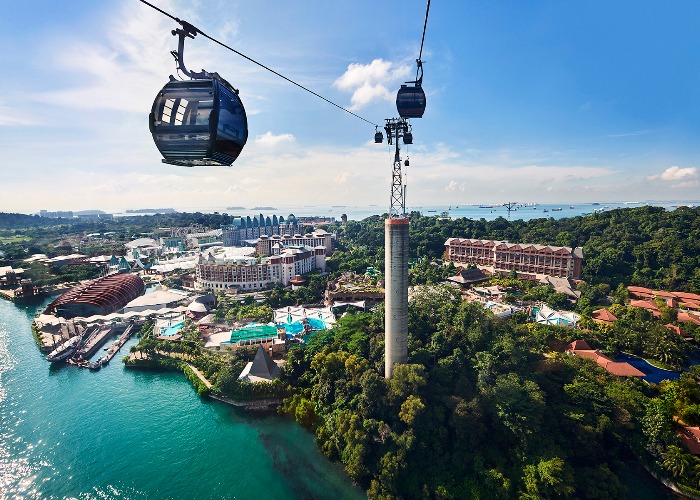 Singapore’s Sentosa Island turns 50 this year and we’ve got the lowdown on how to spend a weekend on Southeast Asia’s capital of fun.

Thought the Queen’s Platinum Jubilee was the big event of 2022? Think again – 2022 marks the Golden Jubilee for Sentosa, a beach-fringed, theme park-filled island connected to downtown Singapore via monorail, cable car and road bridge. Although Sentosa’s famous for its theme parks, which include Universal Studios Singapore, it’s also a wonderful destination for anyone keen to escape the hustle and bustle of Singapore’s urban centre for a day or two. A network of walking and hiking trails wiggles along the island’s beaches and through its forests (get lucky and you’ll spot one of the ridiculously cute crab-eating macaques) and there are some fantastic restaurants and bars, many of which can be found at Sentosa Cove, with its superyacht-filled marina.

There’s never been a better time to visit the island either – several Sentosa hotels (including the Hard Rock Hotel Singapore) will soon be refurbished as part of a major makeover, a new Raffles hotel will open on the island in late 2022 and over the coming years Sentosa will expand to encompass Pulau Brani, a small nearby island which will be connected to Sentosa via bridges. 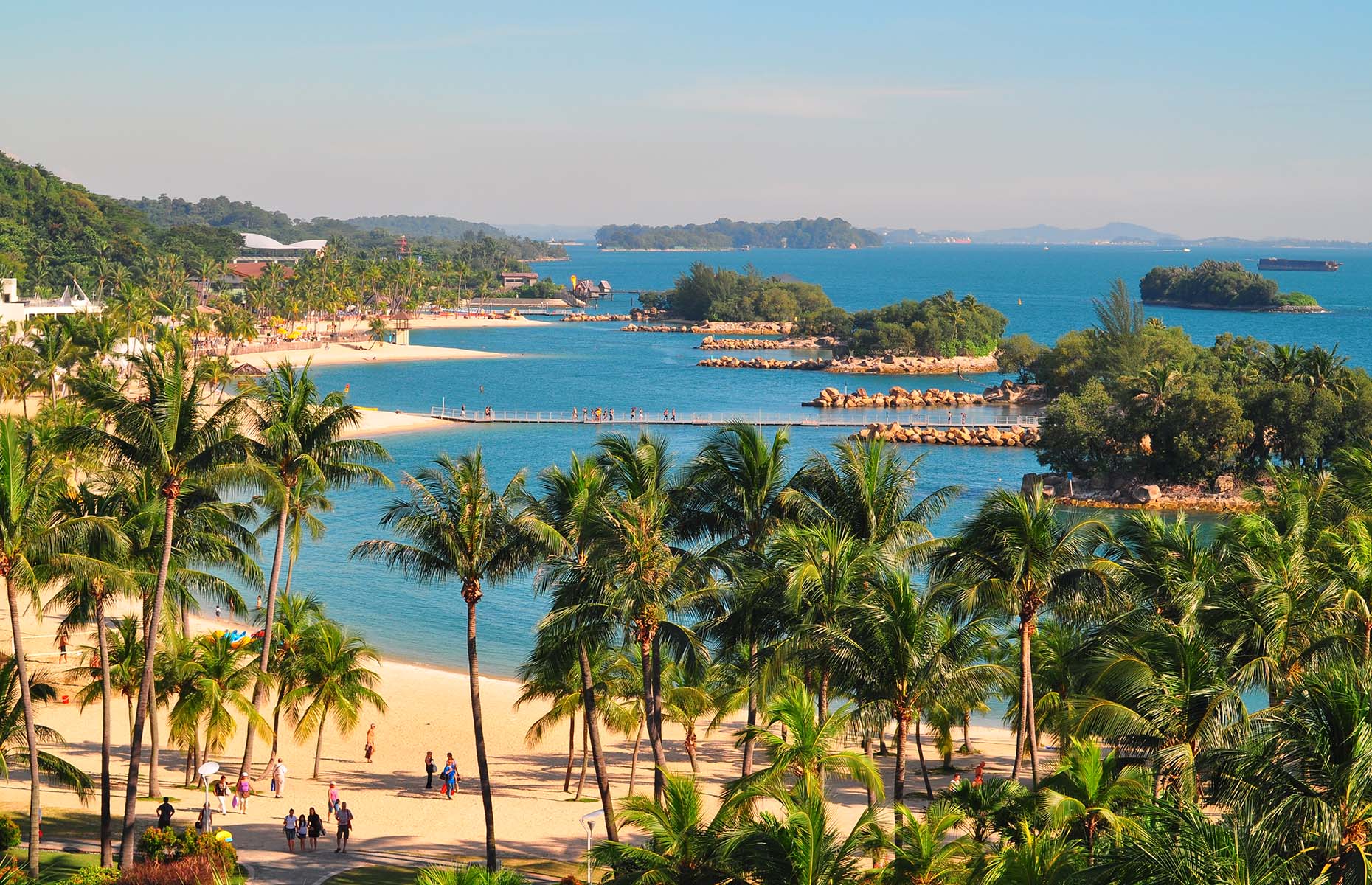 Top tip: Pick up a Sentosa Fun Pass, which slashes the cost of entry to the island’s top attractions and makes admission a breeze – you’ll just need to flash your Fun Pass QR code.

Check-in at: The Capella Singapore. A luxurious hilltop hotel designed by Foster + Partners, it receives its guests via a road which weaves through gardens where peacocks roam free, before pulling up outside what resembles one of Singapore’s many heritage buildings, complete with ornate shutters and airy balconies. Behind the elegant frontage, however, is a building as slick as a James Bond lair. The most sought-after room categories are the spectacular pool villas. 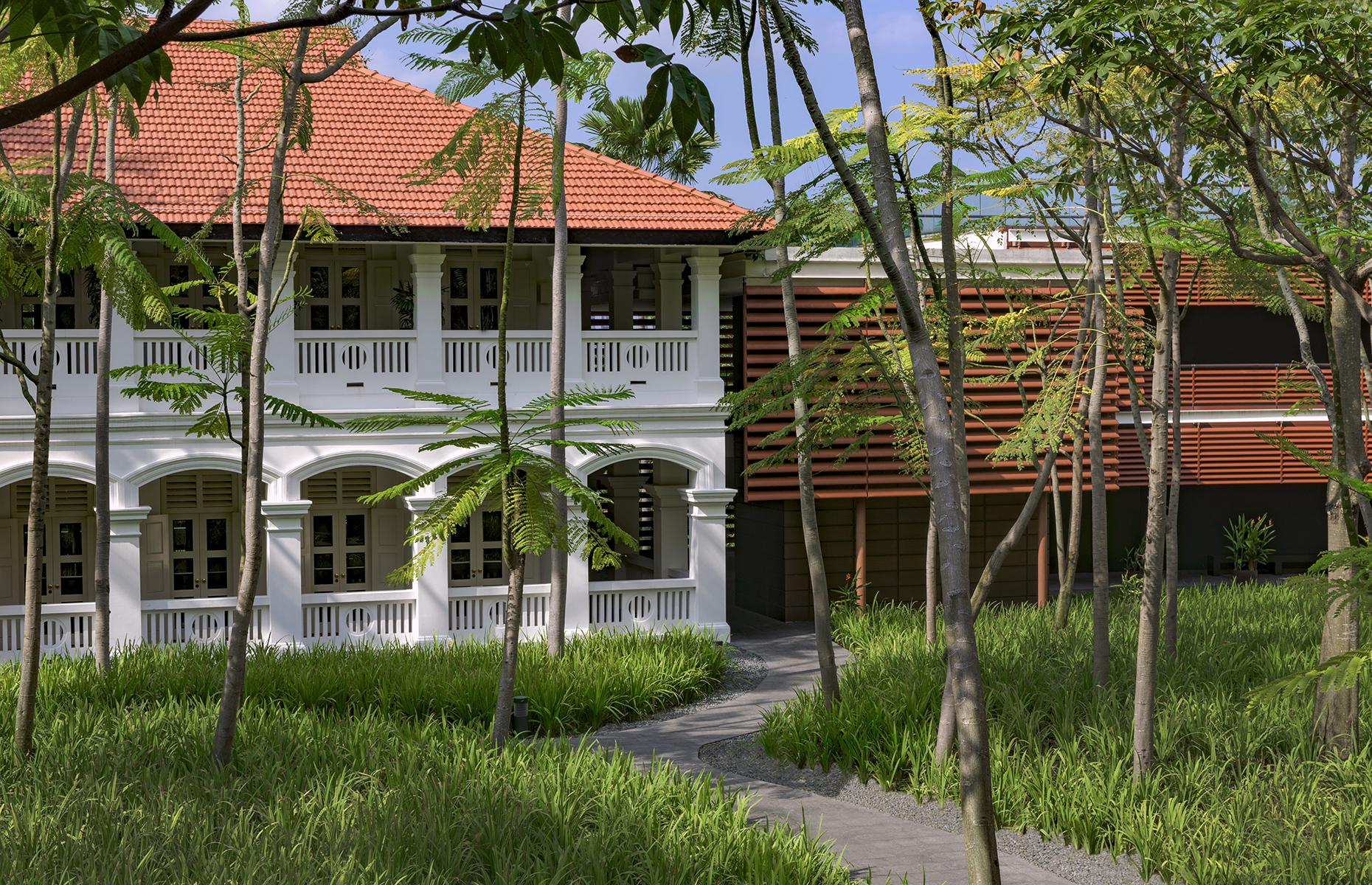 Courtesy of The Capella Singapore

Saddle up: Singapore’s a fantastic destination for cyclists – there are plans to create 800 miles (1,200km) of bike lanes by 2030 and it’s well on track to achieving this goal. Sentosa Island’s seven-and-a-half miles (12m) of bike lanes fan out across the island, meandering along its coastline and looping around Sentosa Cove. The Capella Singapore has previously collaborated with Brompton bikes to provide guests with bicycles to use, although we also recommend the Gogreen Cycles, which can be hired from kiosks on Siloso Beach and Sentosa Beach Station (the arrival and departure point for the monorail which connects the island to the mainland).

Visit: Fort Siloso. Originally built by the British in the late 1800s, it became Singapore’s 74th national monument in early 2022. This coastal battery, which is closely tied to the Japanese occupation of Singapore between 1942 and 1945, has been incredibly well preserved (keep an eye out for the British-built Howitzer guns), and the landmark’s network of footpaths weaves past exhibits which provide a fascinating insight into key events, ranging from the Japanese invasion to their surrender at the end of the Second World War. 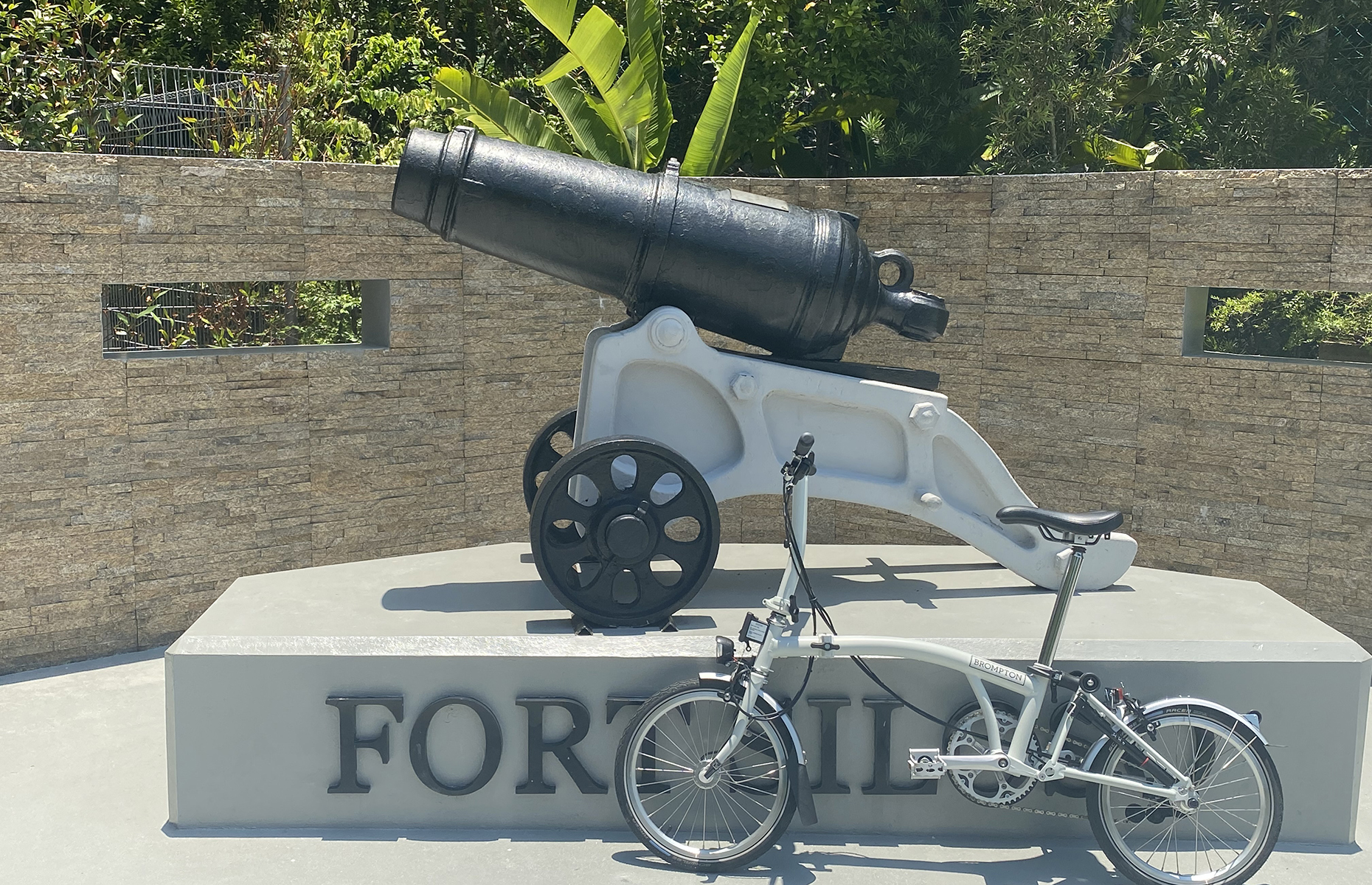 Have dinner at: Bali on the Cove. Here you can feast on fresh seafood (the sea urchin capellini is to die for) while lusting after the beautiful decor. The best bit? You can take a slice of the holiday home with you as the restaurant is also an accessories and homeware boutique. The most sought-after items are the cowrie shell necklaces.

Get high at: Skyhelix Sentosa. Strap yourself into Sentosa’s newest thrill ride (after securing any loose change, ideally) and ascend to 260 feet (79m) above ground level. For the next 12 minutes, you’ll enjoy a whole new perspective on Singapore – the ride slowly rotates, providing fantastic views over both Sentosa and Singapore’s southern islands. 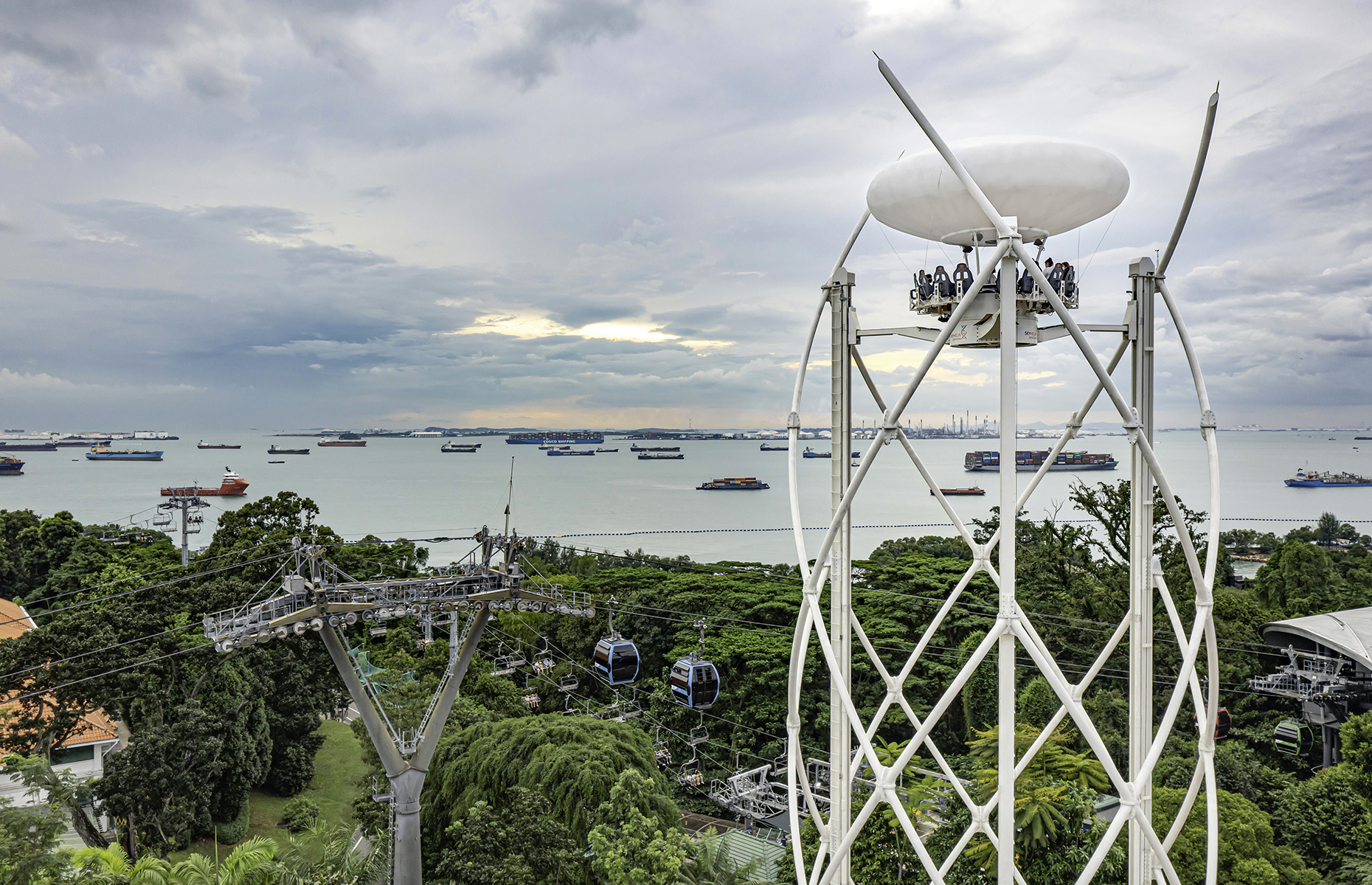 Toast Singapore at: Bob’s Bar. Soon you’ll be able to toast Sentosa with a Singapore Sling at the new Raffles Sentosa Resort & Spa Singapore, due to open in late 2022. The gin-based drink was invented by a barman at the original Raffles hotel, on Singapore’s Beach Road, in 1915. In the meantime, head to Bob’s Bar at the Capella Singapore, where you can enjoy a Siloso Sour, made with Ferrand 1840 Cognac, Fino sherry, Luxardo cherry brandy, grenadine and grapefruit. Aim to get there for 6pm, when bartenders hand out samples of pineapple rum.

Embrace flower power at: Scentopia. Put it this way – when it comes to gifts for loved ones back home, duty-free bottles of CK One will look rather plain after a visit to Sentosa’s newest attraction, which you’ll find on Siloso Beach. Part perfume-making bar, part digital art gallery (there are over 300 flower-themed, scented augmented reality exhibits), Scentopia is a great place to learn about the art of perfume-making, as well as orchids, which are the star of the show here and which are Singapore’s national flower. After taking a quiz designed to help you narrow down your ideal fragrance notes (an essential, given there are over 3.4 trillion possible combinations), you’ll sniff your way through a selection of fragrance wands before creating your very own bespoke scent, which you can turn into a perfume, reed diffuser or bath bomb.

Grab lunch at: 1-V:U. No, we’re not sure how to say it either, but dine at this fabulous rooftop restaurant at the Outpost Hotel and you’ll enjoy spectacular views over the island and of Sentosa’s nightly firework displays. A top tip – the restaurant’s Sunday brunches, with their prosecco, wine, Bloody Mary and cocktail stations, are legendary.

Crank up the fun at: Universal Studios Singapore. It’s a smaller, more compact version of the parks in Florida and California, although an upcoming expansion will see the addition of a Minion Land in 2023. For now, test your mettle on Revenge of the Mummy, a terrifying dark ride. Younger visitors will love the Sesame Street Spaghetti Space Chase, where you’ll embark on a mission (aided by various Sesame Street characters) to stop Macaroni the Merciless stealing planet Earth’s entire supply of spaghetti. Bizarre? Yes – but fantastic fun for all ages.

Watch the sunset: from a hammock or a cabana on Palawan Beach, a golden stretch of sand surrounded by beach bars and restaurants. If you can muster the energy, walk across the rope bridge to the tiny islet, otherwise known as the southernmost point of continental Asia. When hunger strikes, head to FOC Sentosa, a beach club and restaurant where you can feast on Spanish tapas.