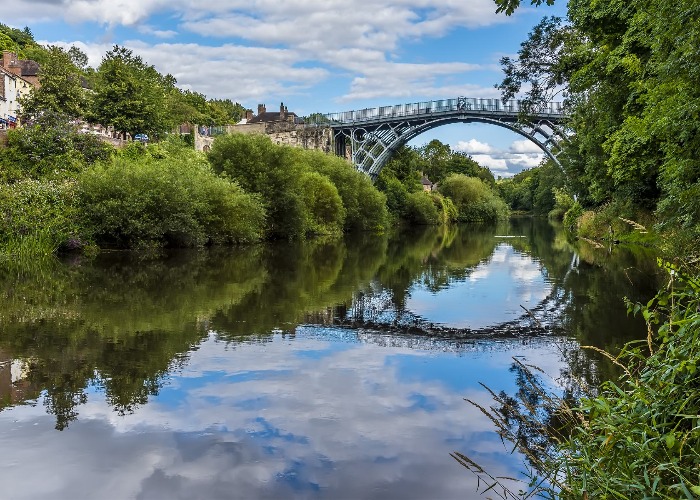 Tucked away beside the Welsh border, Shropshire is the largest inland English county, and boy does it serve up some big treats. From stunning scenery to its proud industrial heritage, it's easy to indulge in this glorious historic place.

Shropshire’s hard to pigeonhole. Dotted with delightful villages and historic market towns, it appears overwhelmingly rural but is also home to one of the Industrial Revolution’s most significant sites. Scratch beneath the surface and you’ll also find abandoned mine shafts and centuries-old mills.

Shropshire boasts a muddled geology that manifests itself in a diverse array of landscapes that includes dramatic ridges, craggy peaks and lush green pastures grazed by contented sheep. In fact, with the exception of a coastline, it pretty much has everything a visitor could wish for. So if you can do without the sea – and you should – here are six compelling reasons to visit Shropshire.

1. Walk the oldest iron bridge in the world

The bridge that crosses the River Severn at Ironbridge is the oldest iron bridge in the world and one of England’s 18 UNESCO World Heritage Sites. This pioneering structure spans a bucolic wooded gorge, yet it would pave the way for the Industrial Revolution. 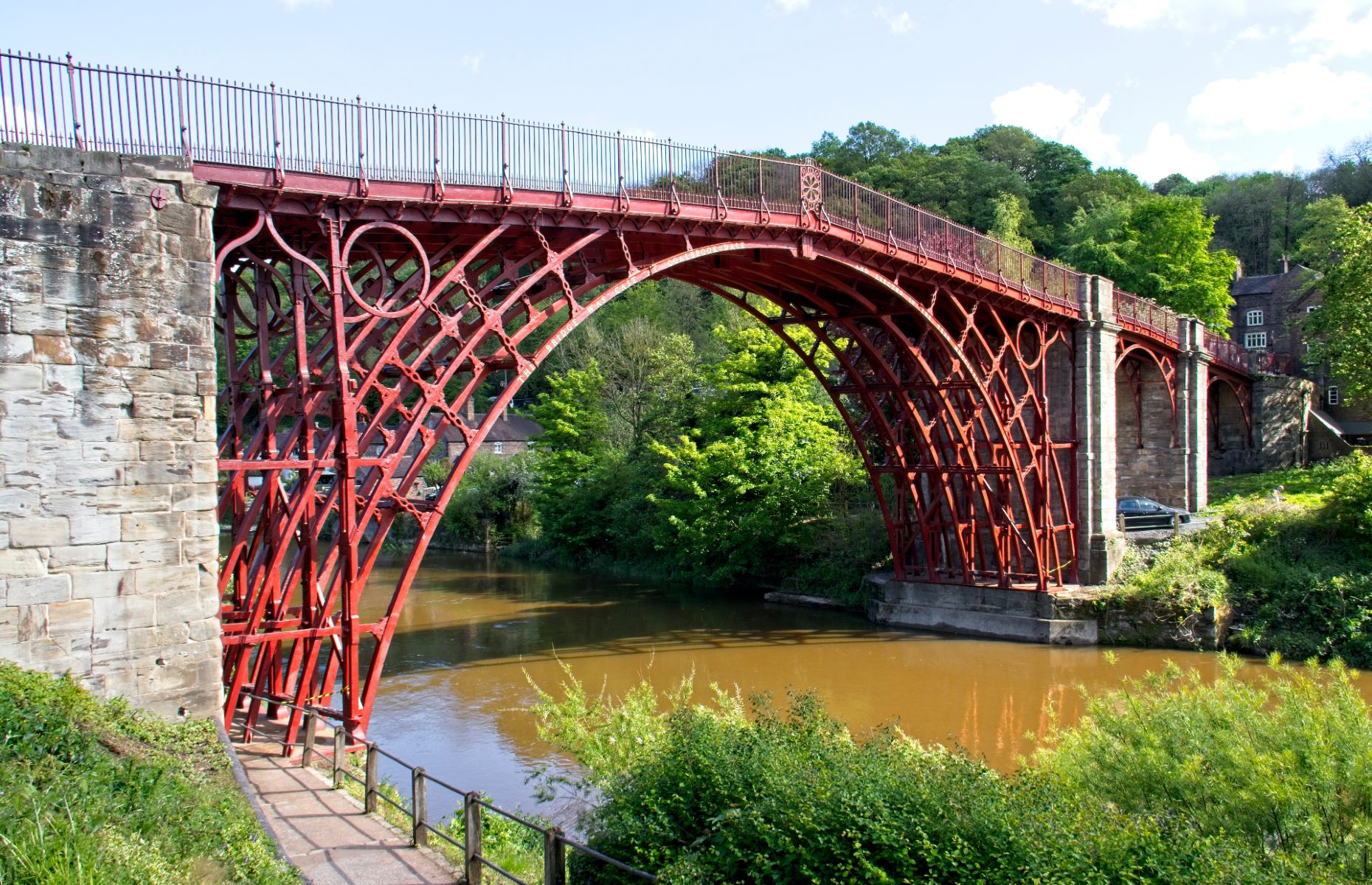 Abraham Darby III oversaw its construction in 1779. Seventy years earlier in nearby Coalbrookdale, his grandfather had worked out how to smelt iron with coke which gave Darby Junior his building material at an affordable price. In 2017, English Heritage embarked on its biggest-ever conservation project – preserving the bridge, which included painting it back to its original red colour. Learn more about the bridge’s history in the Toll House, now a museum.

The Stiperstones is a scenic ridge scattered with quartzite tors – the highest and largest is nicknamed the Devil’s Chair (pictured). In late summer, purple heather carpets the north-facing slopes of these rocky outcrops, while yellow gorse covers the sunnier side of the hill. Early autumn signals the start of the whinberry picking season – the local name for the dark blue bilberries which grow wild here. 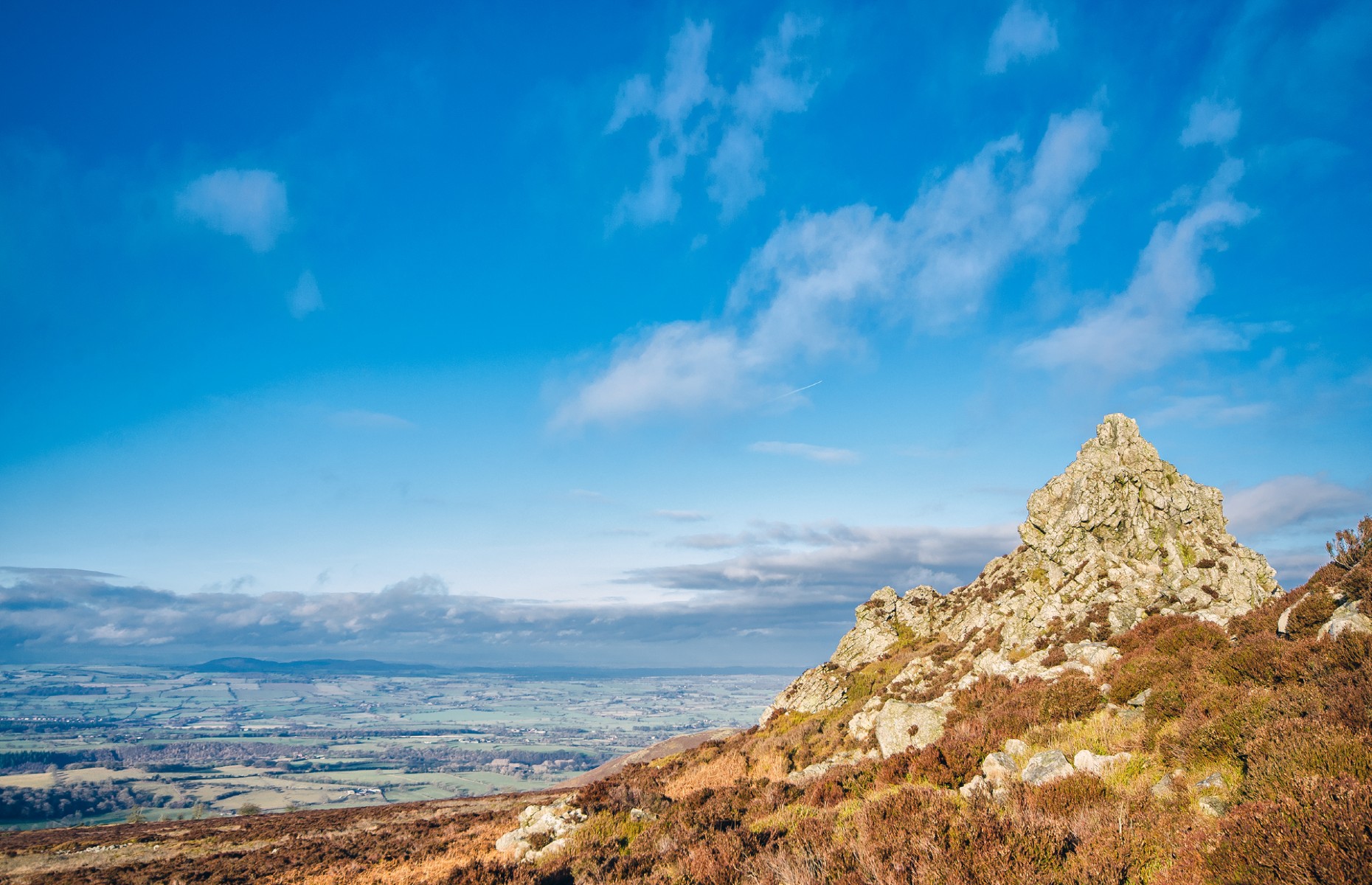 Abundant birdlife delights twitchers – red grouse, stonechats and skylarks are regulars on the heath while buzzards, wood warblers and ravens stick to the nearby woodland.

But this hasn’t always been a rural idyll. Until the early 20th century, lead mining was common here. There’s little evidence now of the families who scratched a living underground in the village they called The Bog. However, the old schoolhouse is now a volunteer-run visitor centre with an excellent reputation for homemade cakes.

3. Drive the Burway across the Long Mynd

The Burway is one of England’s most challenging roads, with a steep ascent that in places has a 20% gradient. To paraphrase Orwell, unless you have quads and calves of steel, it’s definitely a case of “four wheels good, two wheels bad”. Although, keen cyclists would argue that a bicycle is more suited to the narrowest stretches with their vertiginous drop-offs. 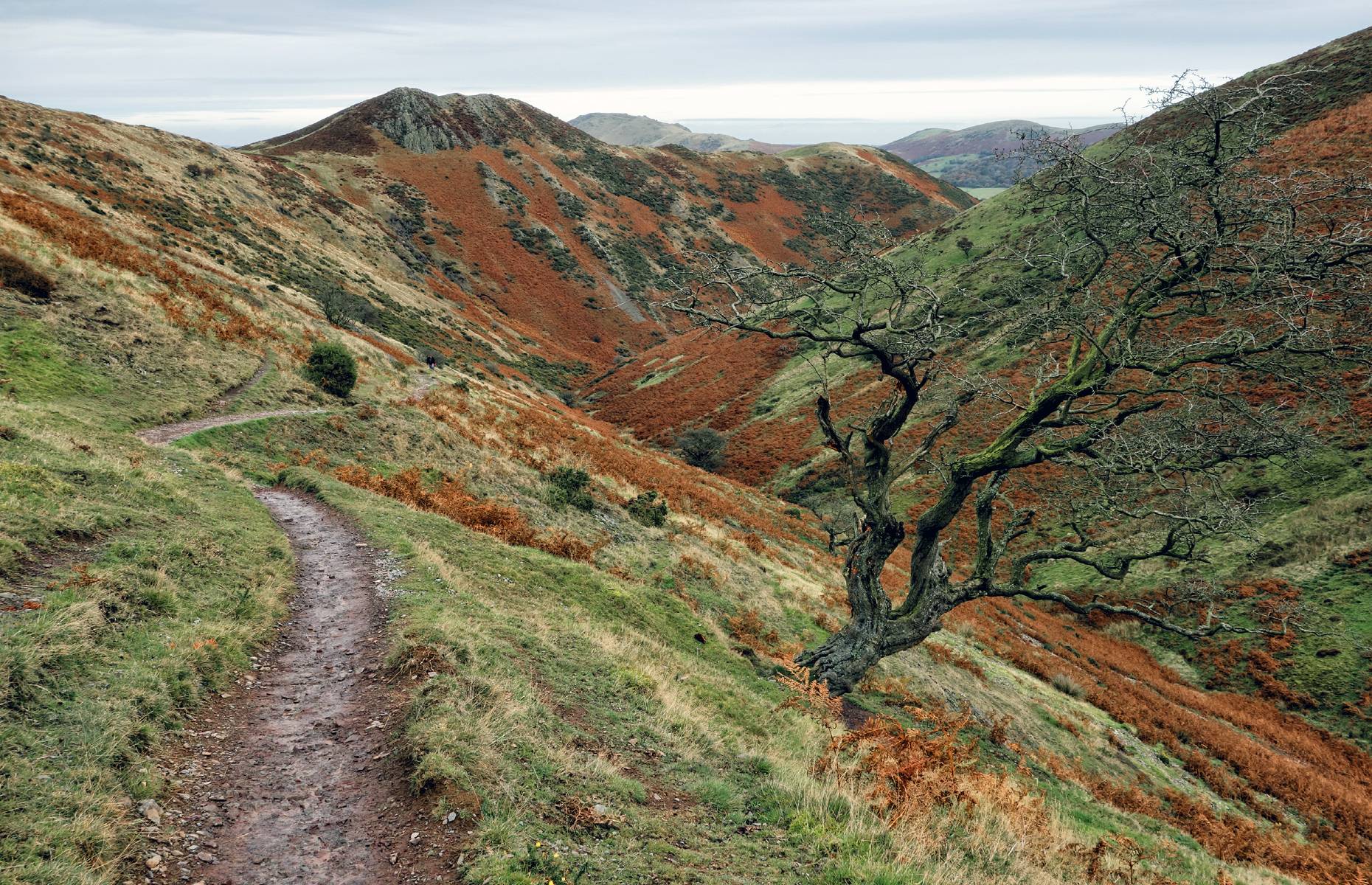 For the brave, getting behind the wheel to tackle this single-track ribbon of tarmac as it snakes across the Long Mynd is one of the great pleasures of a road trip through Shropshire. Park up at the top and explore on foot. On a fine day, you’ll be treated to a breathtaking view of the Shropshire Hills, but expect to be distracted by curious wild ponies as you try to identify the landmarks you see in the distance.

READ MORE: Jaw-dropping pictures of the world's most dangerous roads

4. Discover the birthplace of the modern Olympics

Remember Wenlock, the mascot from the London 2012 Olympics? His name was no accident: the idea for a modern Olympic Games can be traced to the Shropshire village of Much Wenlock and, specifically, a local doctor called William Penny Brookes. 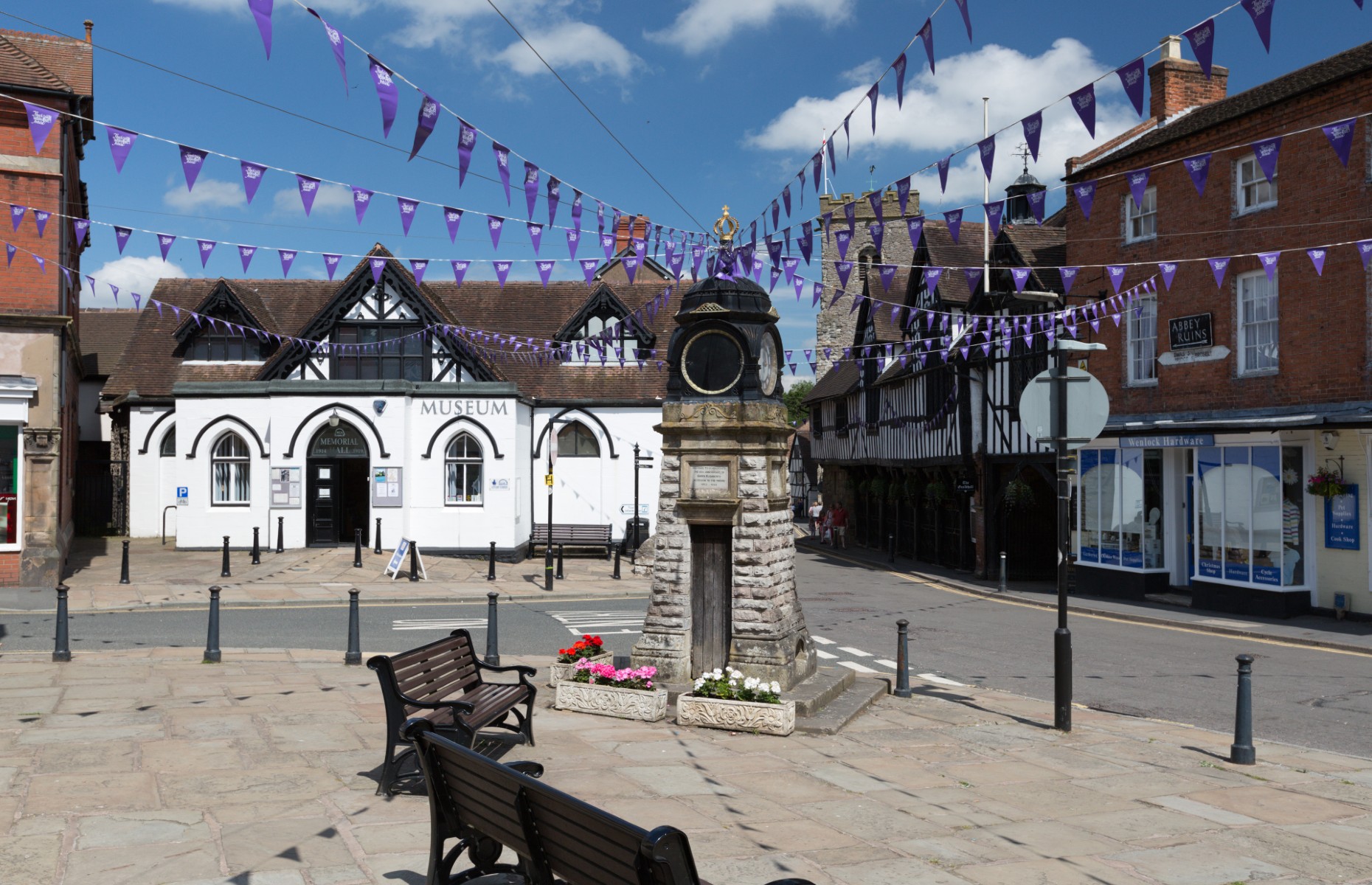 The first Wenlock Olympian Games took place in 1850, a mix of serious athletic endeavours and fun events such as a blindfolded wheelbarrow race. Prizes were equally eclectic: the winner of the 1871 men’s hurdles won a silver inkstand while success in an early “old women’s race” brought the victor a pound of tea.

No matter what time of year you come, you can walk the 1.3 mile long Wenlock Olympian Trail and visit Much Wenlock Museum to learn more about the enterprising medic and his sporting legacy.

READ MORE: 30 of Britain's most historic towns and cities

5. Visit the leaning tower of Shropshire

Medieval castles and fortified manor houses litter the county. One of the most distinctive is in Bridgnorth. Founded in 1101, this castle took a battering during the English Civil War. Today it is in a poor state of repair and still bears the scars left by cannonballs. The castle’s tower leans at a precarious 15° angle, significantly greater than that of the Leaning Tower of Pisa. 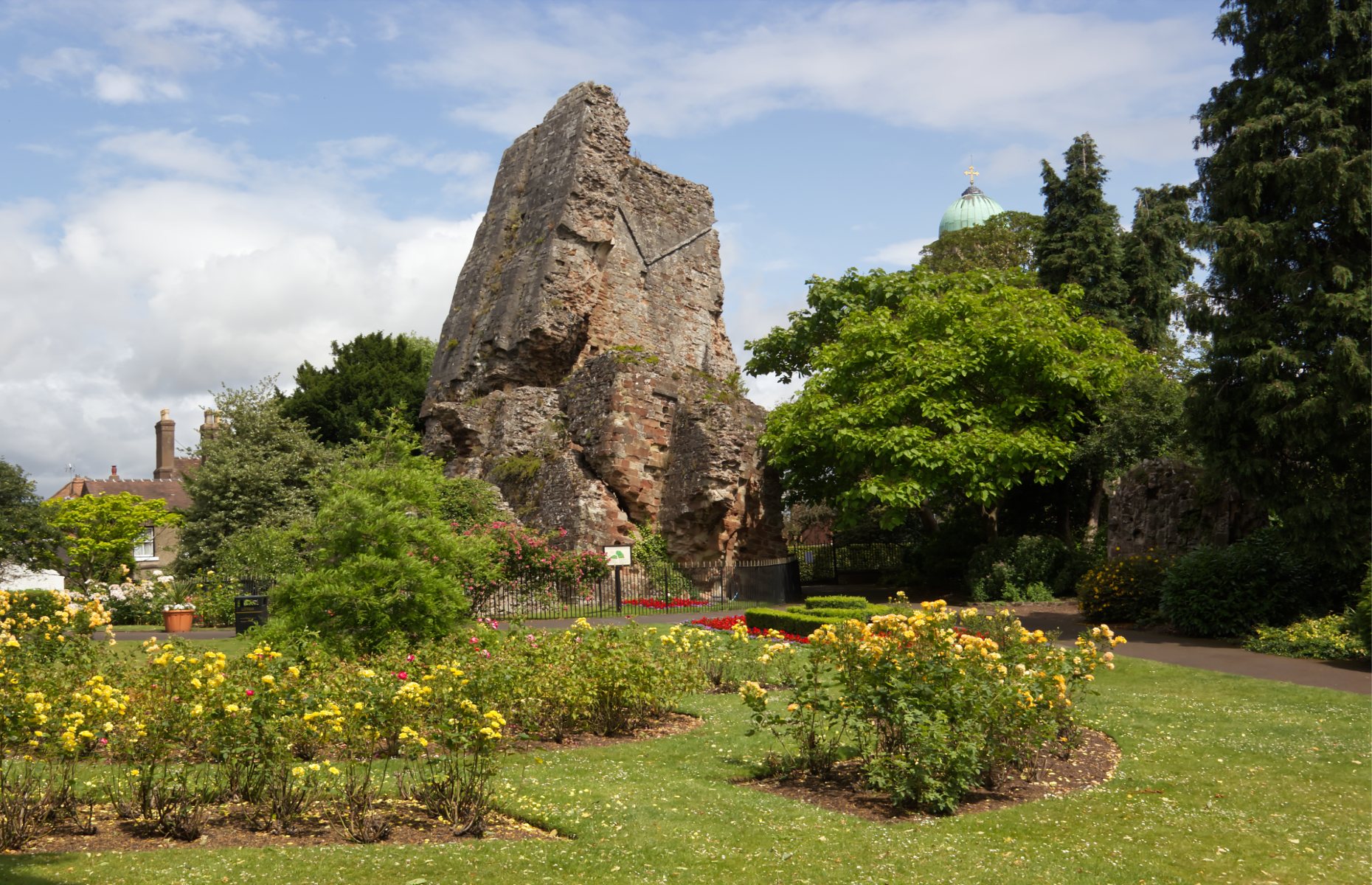 Ludlow Castle fares a little better. Though a ruin, this Norman castle is a gloriously photogenic one. Writer Daniel Defoe, who authored Robinson Crusoe, once described it as “the very perfection of decay”. 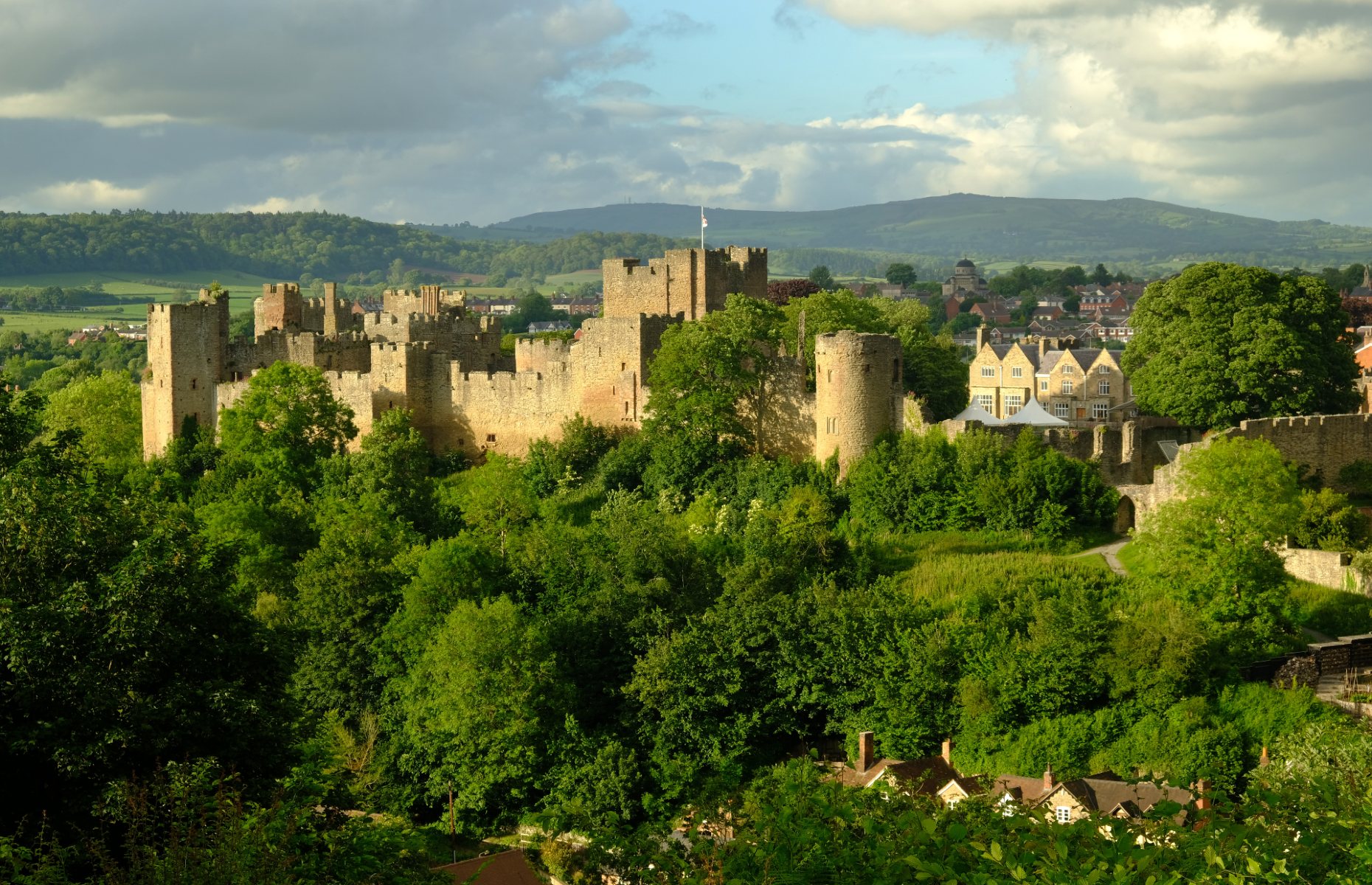 In contrast Stokesay Castle, built by local wool merchant Laurence of Ludlow in the 13th century, is in excellent condition.  In the 1640s, the new owners added a timbered gatehouse, costing them the princely sum of £530. However, the place would never have withstood any serious attack, not least because the gatehouse was on the wrong side of the castle away from the road. 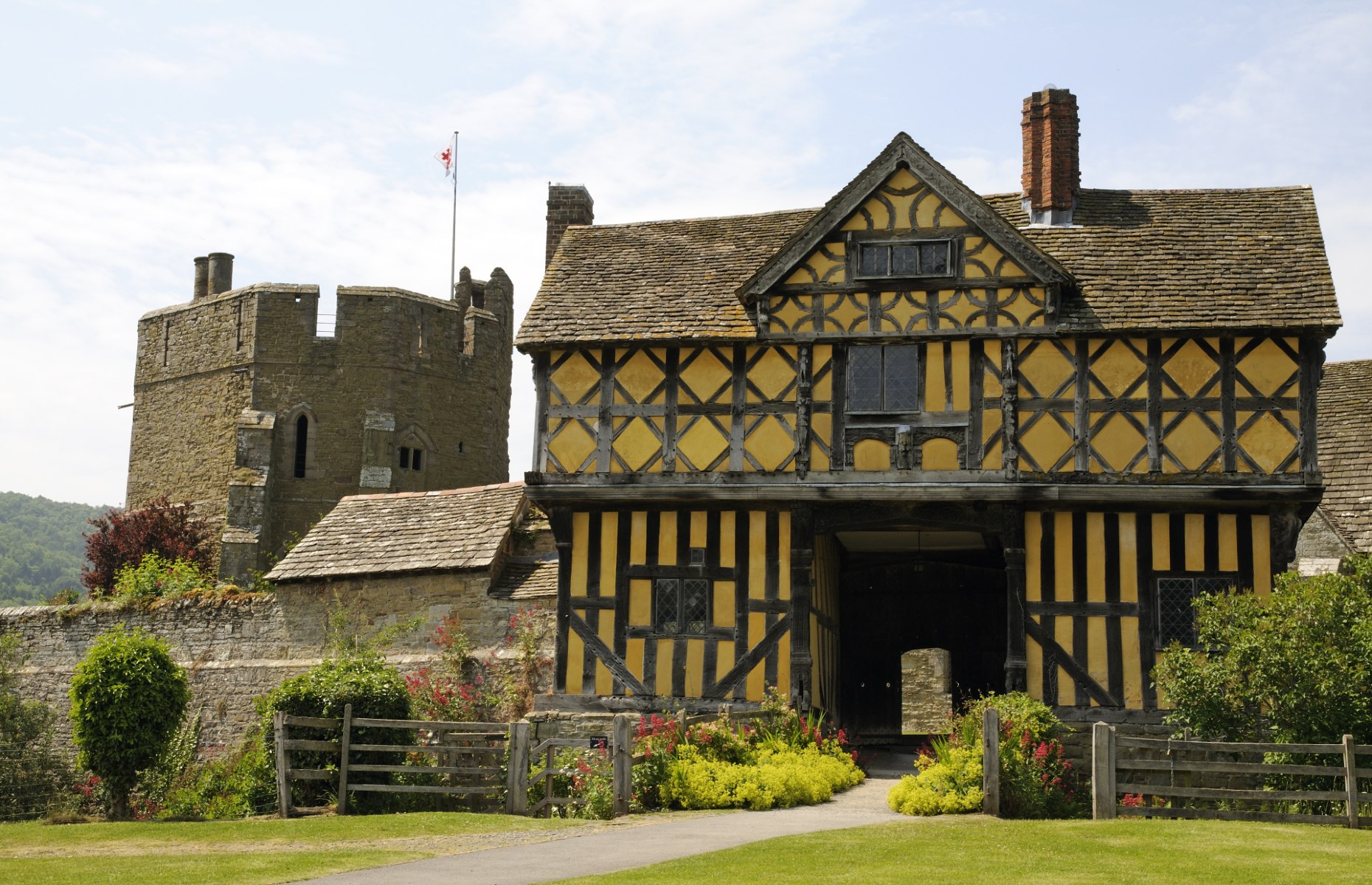 Cheesemongers, artisan bakers, craft brewers, chocolatiers, butchers and winemakers prove that the area’s reputation as a magnet for foodies is justified. Join them to sample regional favourites such as owl soup (these days made with chicken), Shropshire fidget pie and Market Drayton gingerbread.

You might also want to join in with the Magnalonga. This August walk is adapted from a similar event hosted by Ludlow’s Italian twin town. Participants stroll at a leisurely pace through the Shropshire countryside, pausing at frequent intervals to enjoy locally made food and drink as they add another course to their mobile meal.