A guide to Los Angeles' neighbourhoods

Navigate your way around the City of Angels with our top recommendations on where to stay and what to do in each area.

Los Angeles is always enchanting, often exciting – and frequently overwhelming, especially for first-time visitors. So rather than spending half your trip driving between attractions and sitting in traffic, take the city in bite-size chunks by exploring its districts, from classic Hollywood and upscale Beverly Hills to hip hoods like Silver Lake.

Here’s our guide to some of the best places to base yourself in when visiting LA. 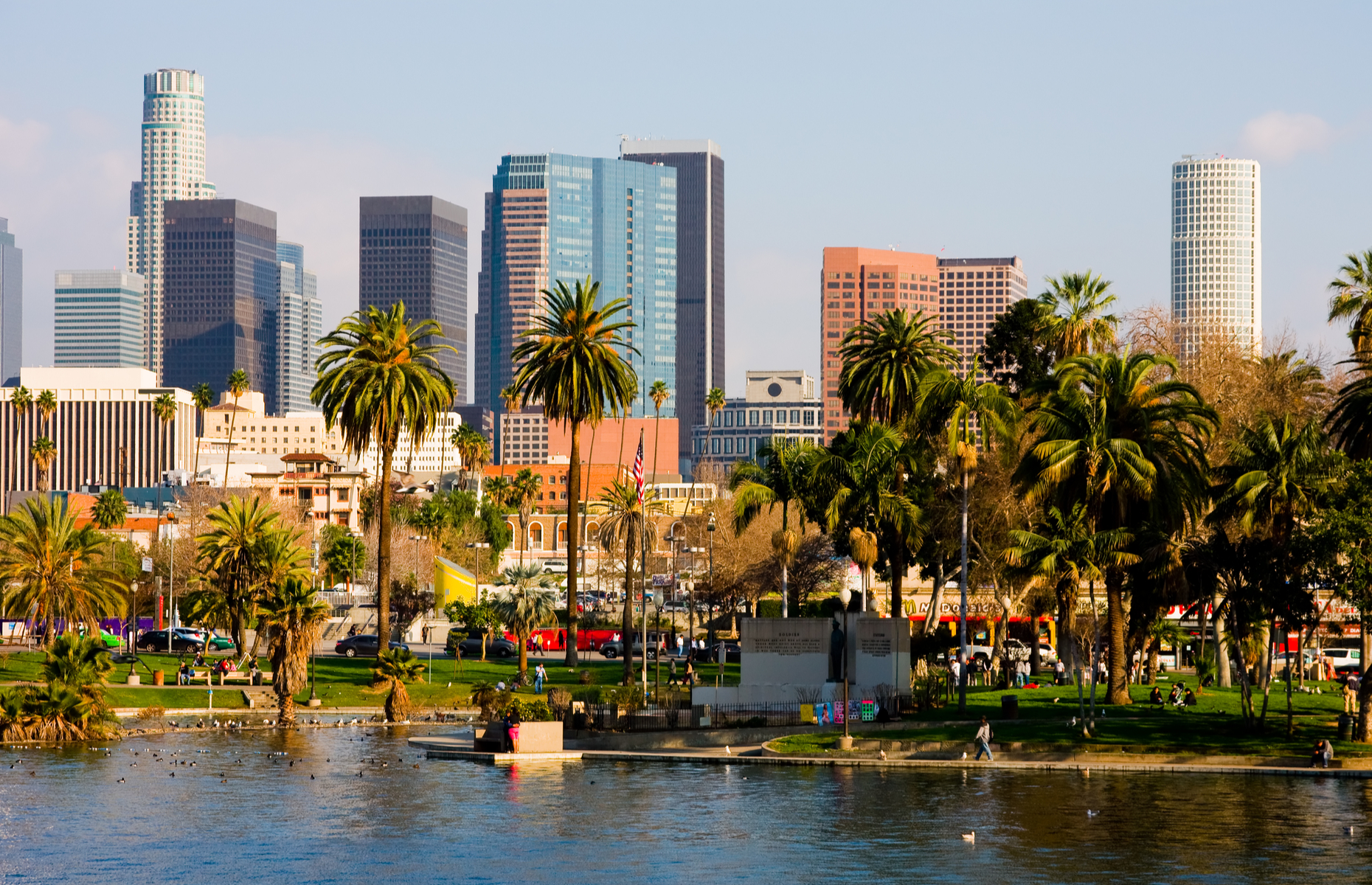 For a little downtime, head to Grand Park, a pocket of green tucked among the skyscrapers. It has a wading pool and plenty of grass for lounging and mustering up the energy for the evening ahead.

The Ace Hotel, whose rooms have huge beds, local artwork and Smeg fridges, is perhaps the coolest place to sleep in town. If you sleep at all, that is. The rooftop bar, with strong cocktails and an inviting pool, and on-site 1920s movie palace make staying up a little too easy. 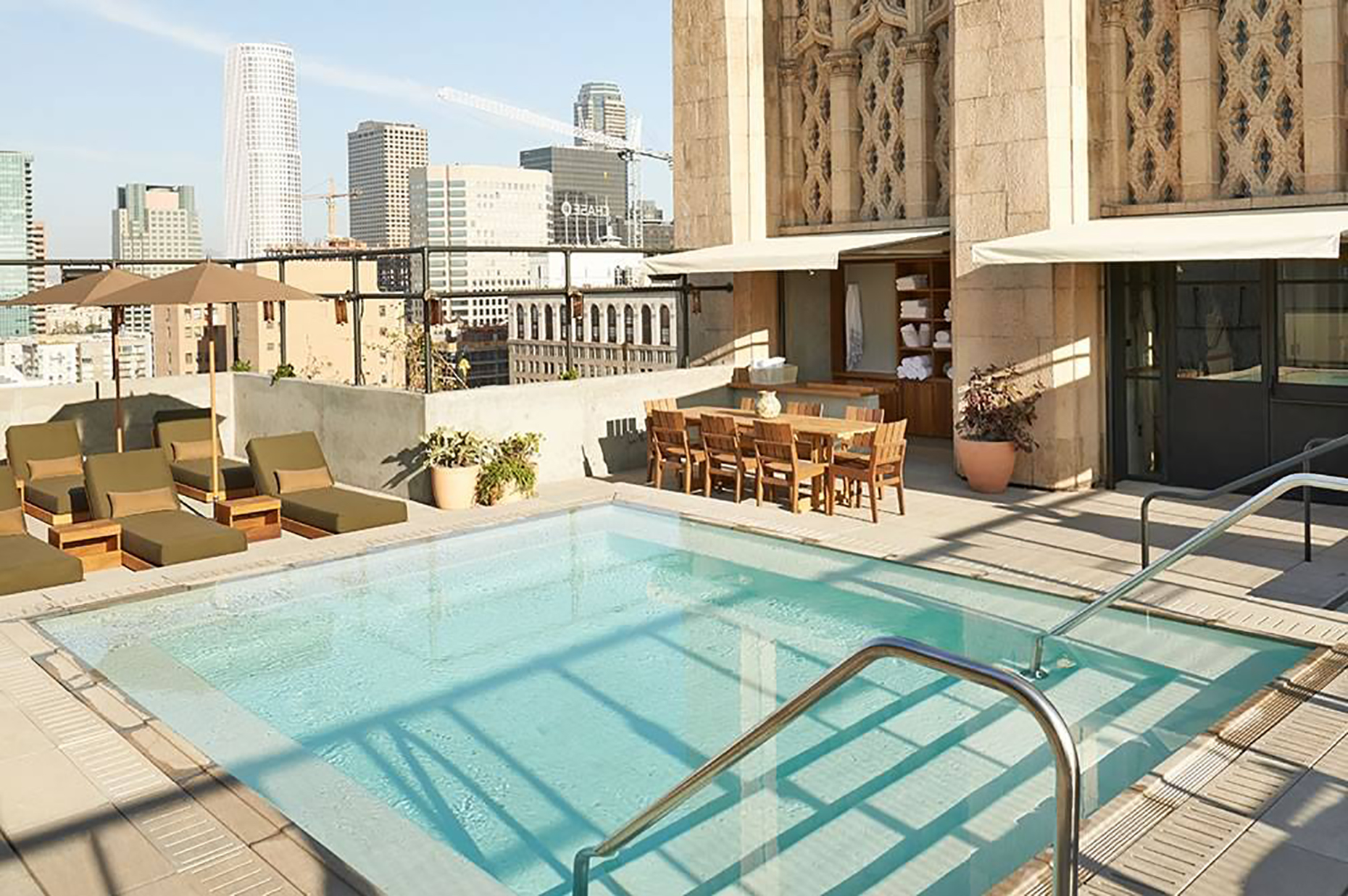 The Arts District, on the edge of Downtown LA, pops with colourful, intricate murals, emblazoned on walls, car parks, and the sides of craft beer pubs and chic gift stores (the kind filled with stuff you don’t really need but really, really want). Nearby, the Fashion District – 100-odd blocks of textiles, craft and home decor stores – poses a similar threat to your wallet. 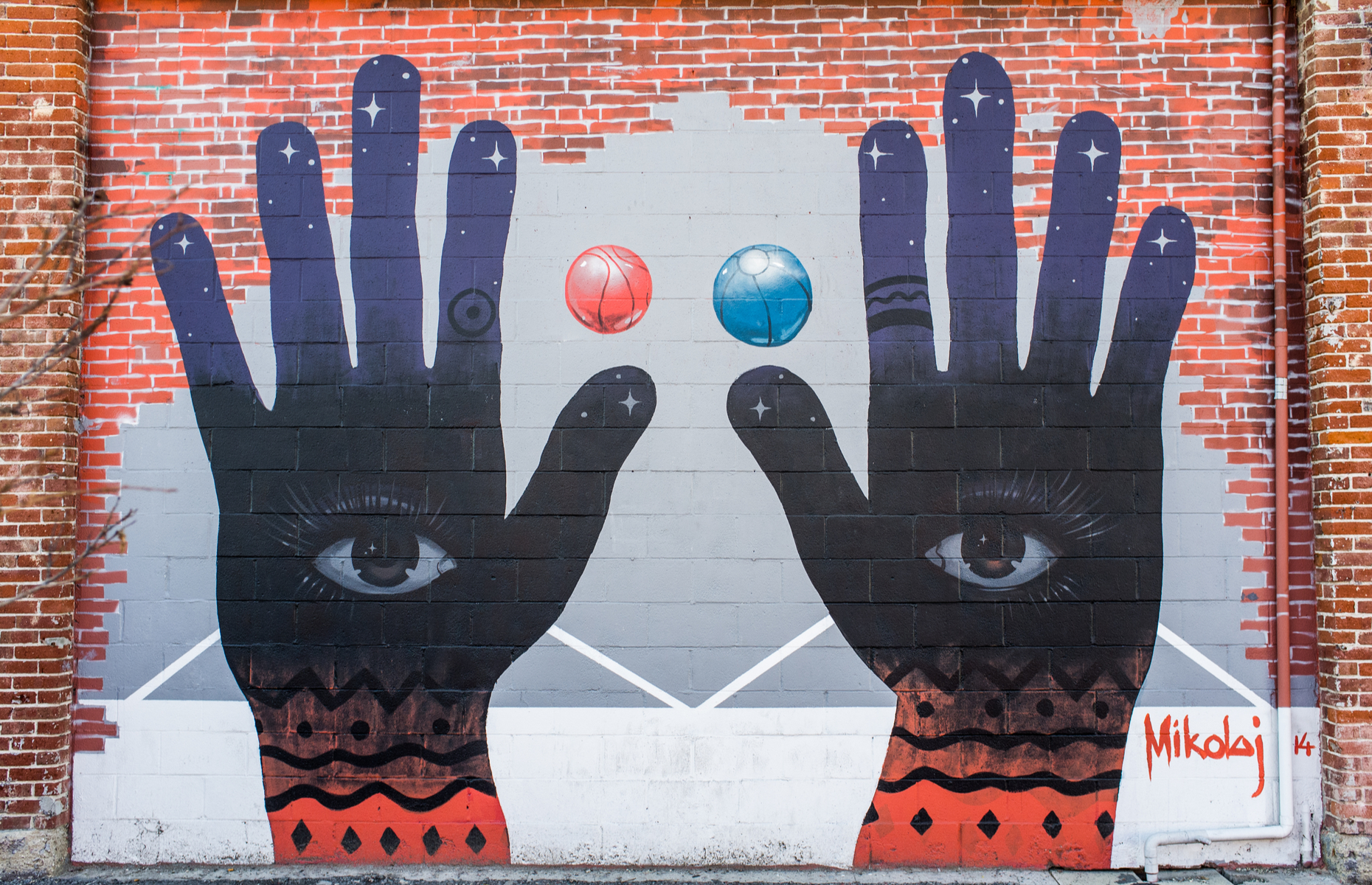 If you’re there on a second Thursday, join the Downtown Art Walk for late-night access into galleries and studios, music and street food.

Hollywood is the place to stay if you want the classic LA experience and to immerse yourself in the city’s glitzy, glamorous past and present.

You can (literally) follow in celebrities’ footsteps outside the TCL Chinese Theatre – the prints of stars from Clark Gable to Meryl Streep are immortalised in paving slabs. Or immerse yourself in Tinseltown with tours of Paramount and Universal Studios, both still making movies. 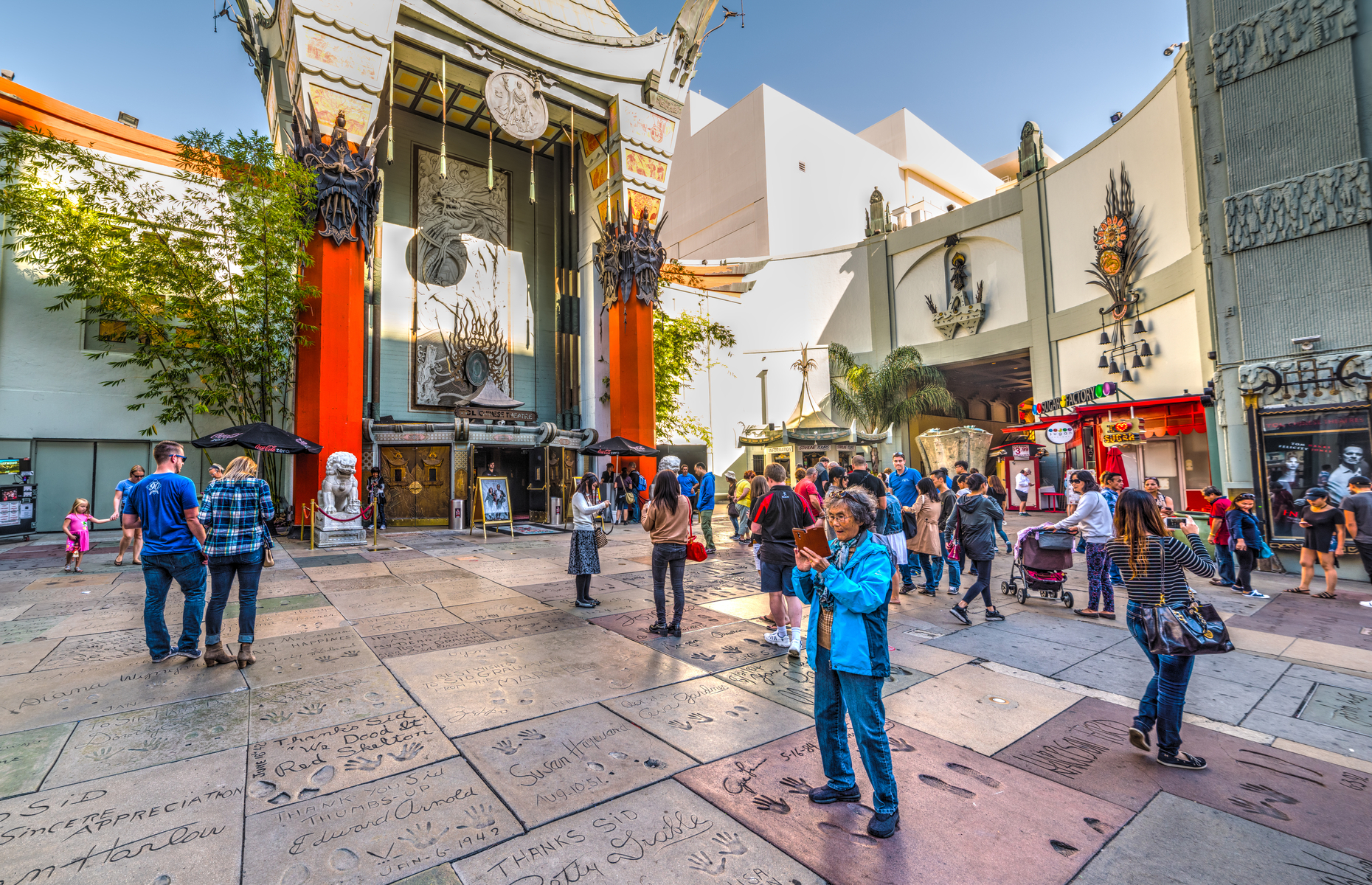 The Hollywood Roosevelt is directly opposite the TCL Chinese Theatre and the Walk of Fame, though its luxurious suites and gorgeous pool area – complete with glam cocktail bar – are also pretty compelling reasons to stay here.

For something completely different yet still suitably starry, head to Hollywood Forever Cemetery. It’s the who’s who of graveyards, with Judy Garland, Mickey Rooney and Rudolph Valentino among those buried here. Cinema screenings and concerts play out on the lawn in summer.

Walkable isn’t the first word that springs to mind when describing sprawling LA, yet many of the individual neighbourhoods are easy to explore on foot – and West Hollywood is perhaps the best choice for car-shy travellers.

It has the classic feel (and palm trees) of Hollywood but with an added, slightly edgier, charm. It also feels more like a distinct neighbourhood, with upscale boutiques, busy brunch restaurants and vintage emporiums. 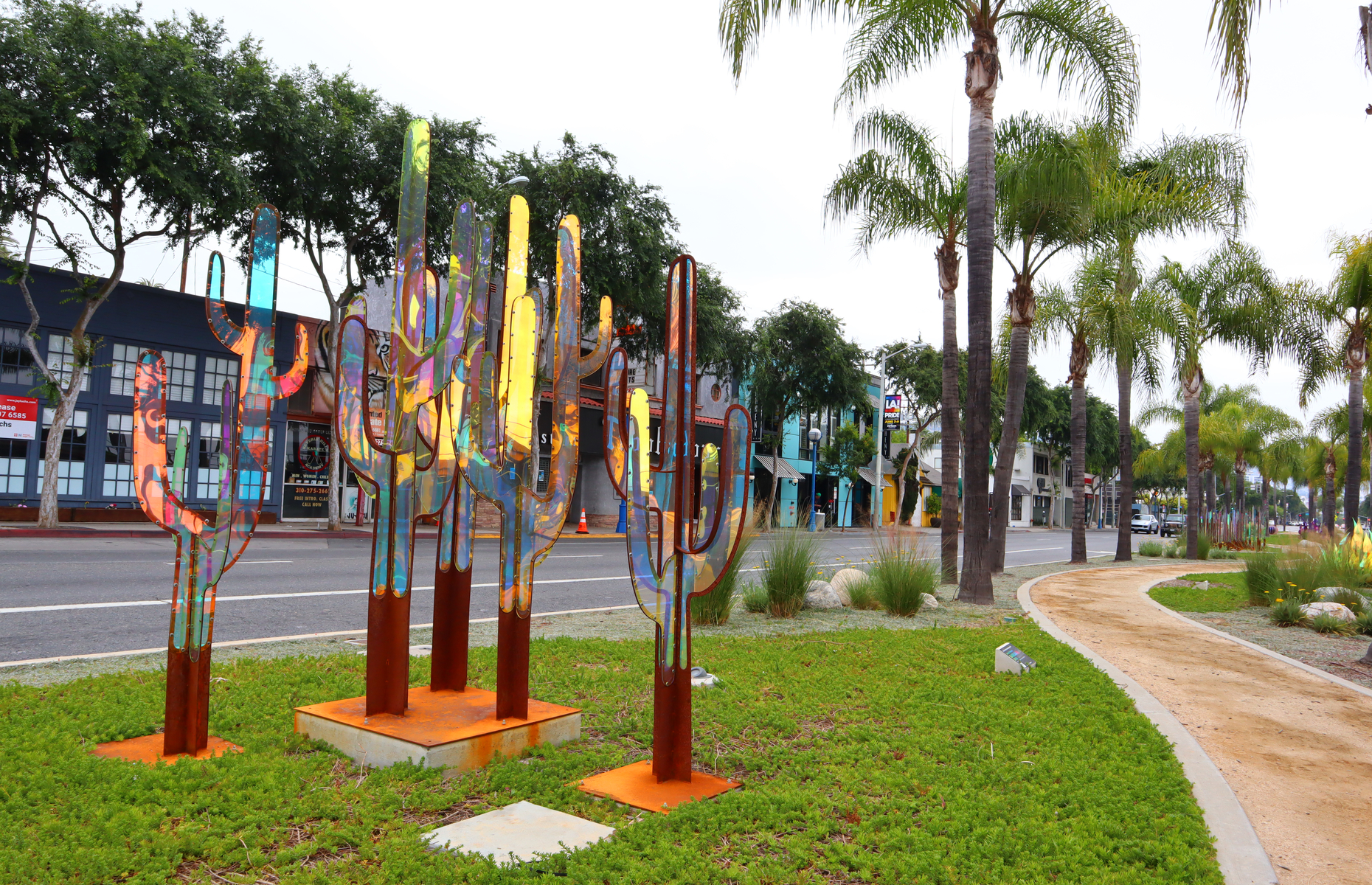 This area will suit night owls, with plenty of bars and clubs offering an excuse to get dressed up. Or head off the main drag to find dimly-lit bars and low-key eateries like Parisian-style bistro The Little Door.

The Chamberlain’s Art Deco-style rooms provide a suitably chic base. The hotel is tucked down a leafy residential street between Sunset Strip and Santa Monica Boulevard, and there’s a lovely rooftop pool with cabanas. 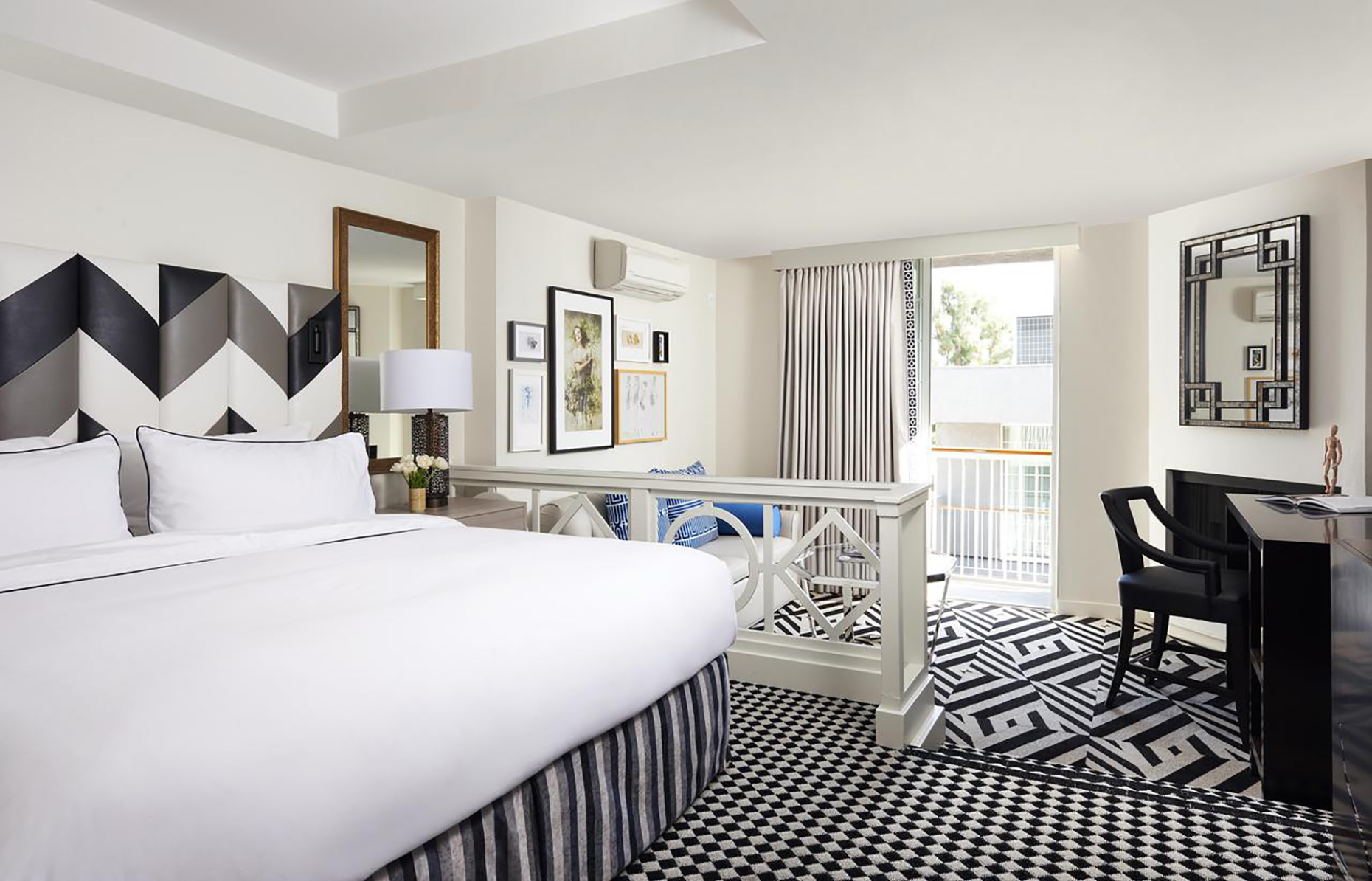 Bikes and Hikes, on Santa Monica Boulevard, offers cycle rentals for exploring on two wheels (surprisingly stress-free if you stay traffic aware). The company also has cycling tours including LA in a Day, which covers 32 miles of the city with a guide, visiting Beverly Hills, Venice and Santa Monica.

Try not to hum Pretty Woman as you stride down Rodeo Drive, surrounded by the well-heeled and even better dressed. It’s even harder when you pass the grand Beverly Wilshire hotel, which featured heavily in the film, on Wilshire Boulevard.

It isn’t Hollywood but it has perhaps just as many movie connections and associations. Scenes for films including Clueless, Shampoo and, of course, the Beverly Hills Cop trilogy have been shot on these palm-fringed streets. 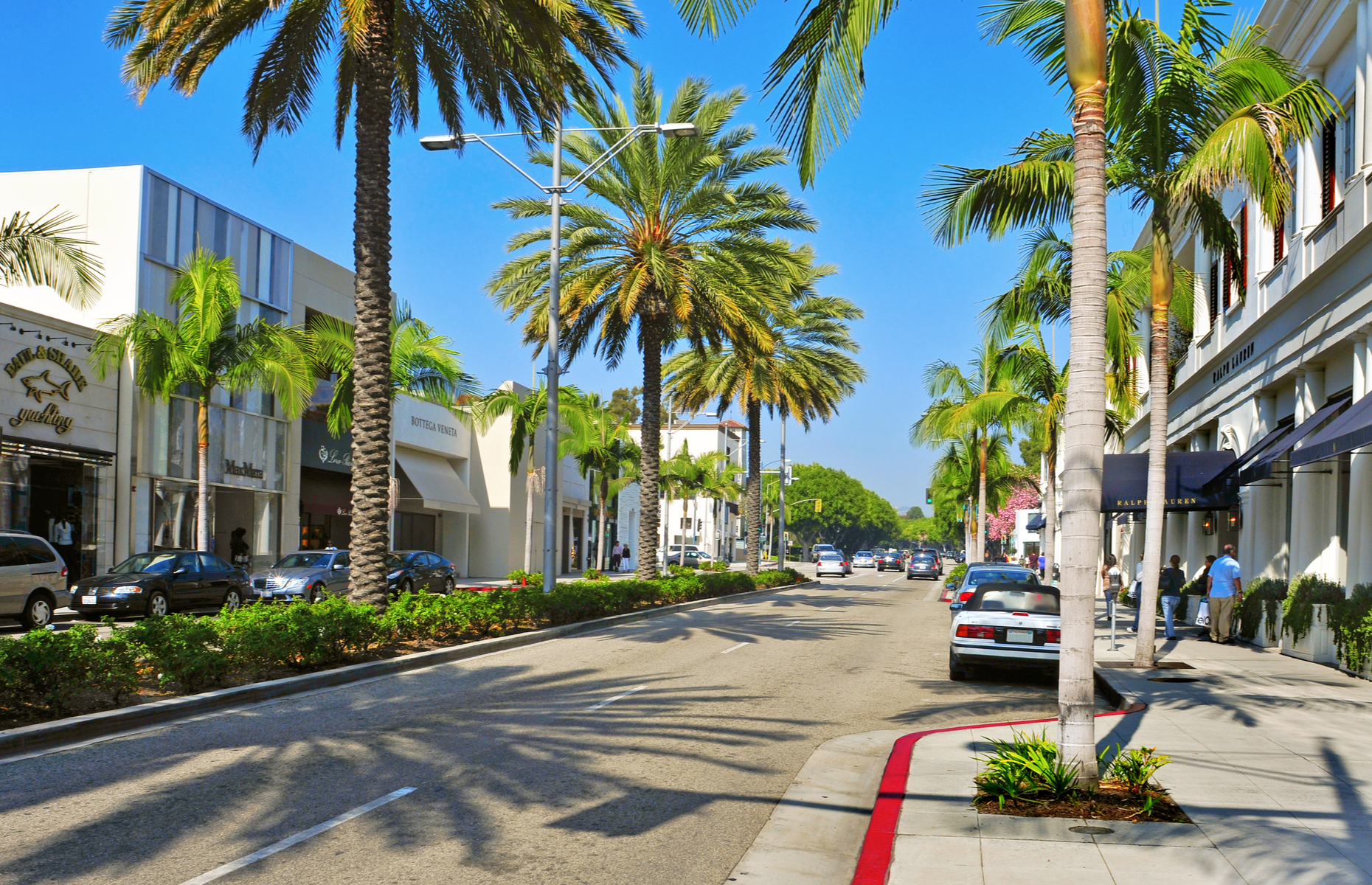 You might need a megastar wallet to actually buy much from the high-end stores of Rodeo Drive and the portion of Melrose Avenue that runs through the district, but this is the ultimate window shopping destination.

A relatively affordable option among some of the city’s most luxurious properties, Hotel Beverly Terrace nevertheless cuts enough dash to fit right in. Rooms are modern, bright and stylish, and of course there is a roof terrace which has clear views of the Hollywood sign.

Trek or cycle up to Greystone Mansion, yet another movie star. This one has featured in X-Men, The Big Lebowski and Batman & Robin. It’s free to wander around the landscaped grounds. 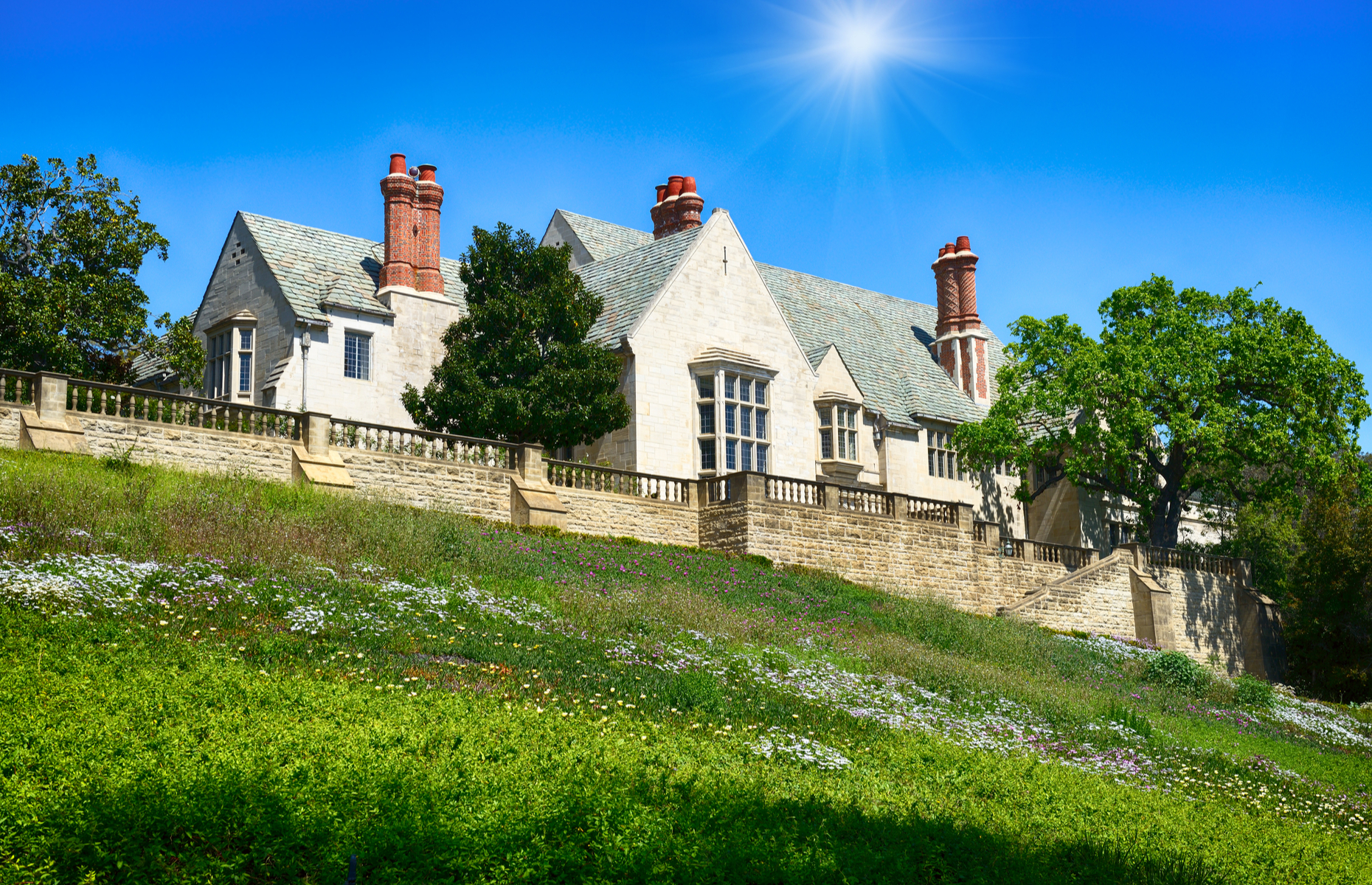 The Los Angeles County Museum of Art or LACMA, a sweeping collection of works spanning more than 6,000 years, is another must.

Looking for a real neighbourhood feel? Silver Lake, often compared to Brooklyn, is a charmingly quirky and arty hub with great food, shops and people-watching opportunities.

Most of the action is centred around Sunset Junction, Silver Lake’s portion of the seemingly endless Sunset Boulevard. You could while away hours pottering around shops like trendy Mohawk General Store and Bar Keeper, stuffed with vintage glassware and regional spirits.

Refuel with a brothy bowl of noodles at Silverlake Ramen before catching a show at The Satellite, a long-running local favourite for indie music, stand-up comedy and themed dance parties.

Opening fall 2019, Silver Lake Pool & Inn is the area’s first boutique hotel. Rooms are decorated in warm, neutral shades with woollen throws, rugs and cushions adding layers of texture. There’s a gorgeous terrace with fire pits and a pool, too. 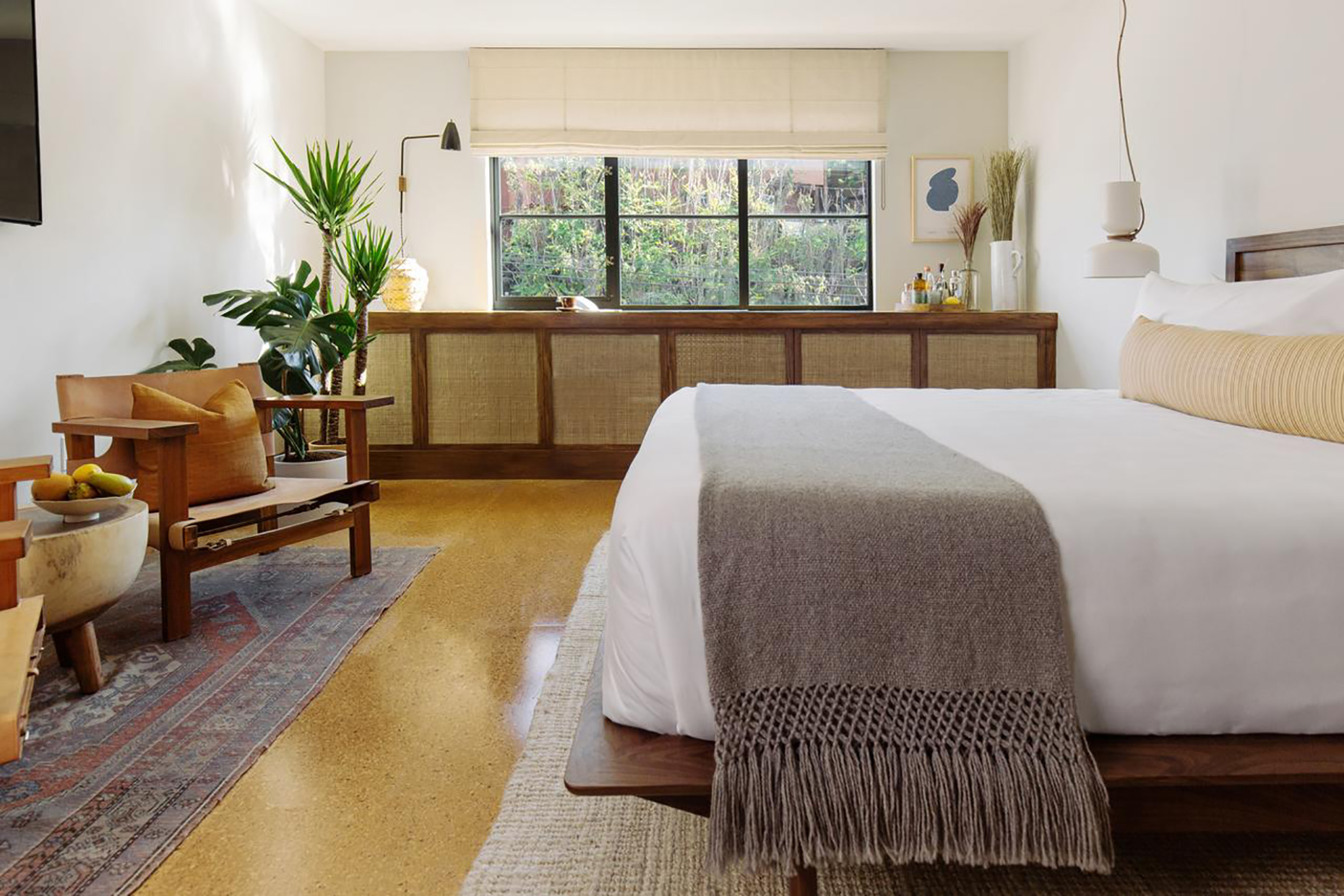 A series of hidden staircases snakes up and down Silver Lake’s hillsides, including the rainbow-striped Micheltorena Stairs. The steps, built to help people reach now-defunct streetcar stations, are painted with bold colours and murals. Discover LA has a guide on where to find these and other secret staircases in the city.

Venture a few miles north to the Los Feliz district to explore Griffith Park, an incongruously wild sprawl of mountains and canyons with hiking trails and the Griffith Observatory, which has incredible views of the Hollywood sign.

A cute beach town that’s within a short distance of the airport? It’s easy to see why Santa Monica is often top of travellers’ lists. With blocks of quirky boutiques, galleries and high-street shops, with craft cocktail joints, cafés and innovative restaurants in between, it’s a destination in its own right.

Spend the morning pottering around bookshops and souvenir stores, then stroll down to the broad stretch of sand and famous Santa Monica Pier, home to more restaurants, an old-school arcade and a carousel that can be seen for miles. 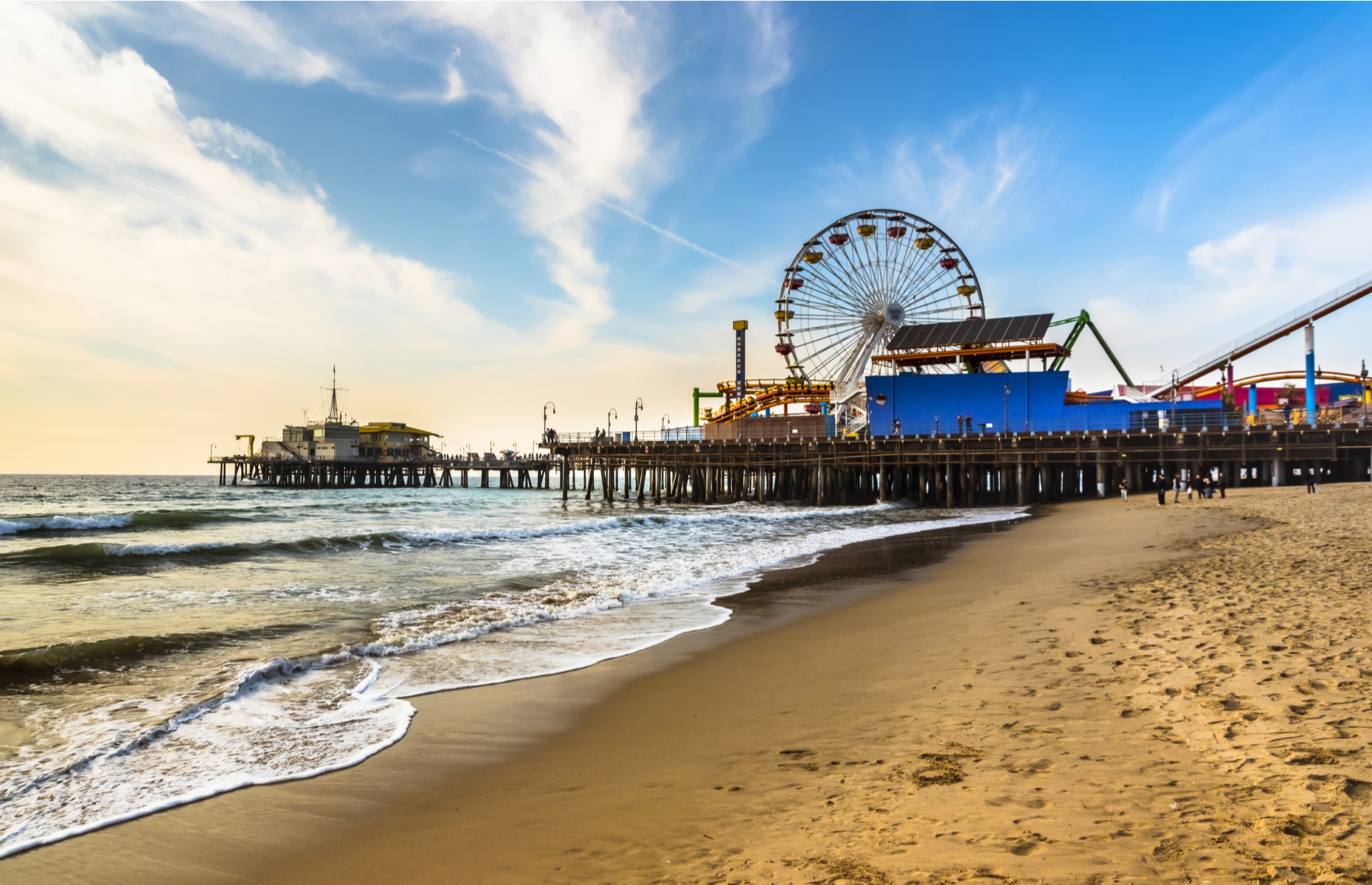 With its breezy blue and white decor and direct access to Santa Monica’s soft beach, which you can explore on free-to-use beach cruisers, Shutters on the Beach is a California classic.

Take a photo with the End of the Trail Sign on Santa Monica Pier, marking the official end of the iconic Route 66 highway. If you’re there on a weekend, browse one of the farmers’ markets in downtown – there are two on Saturdays and one on Sundays, with stalls overflowing with fresh fruit and veg, and regional specialities like honey. If you get the chance, catch a concert at McCabe’s Guitar Shop, whose intimate gig room holds just 150 people. 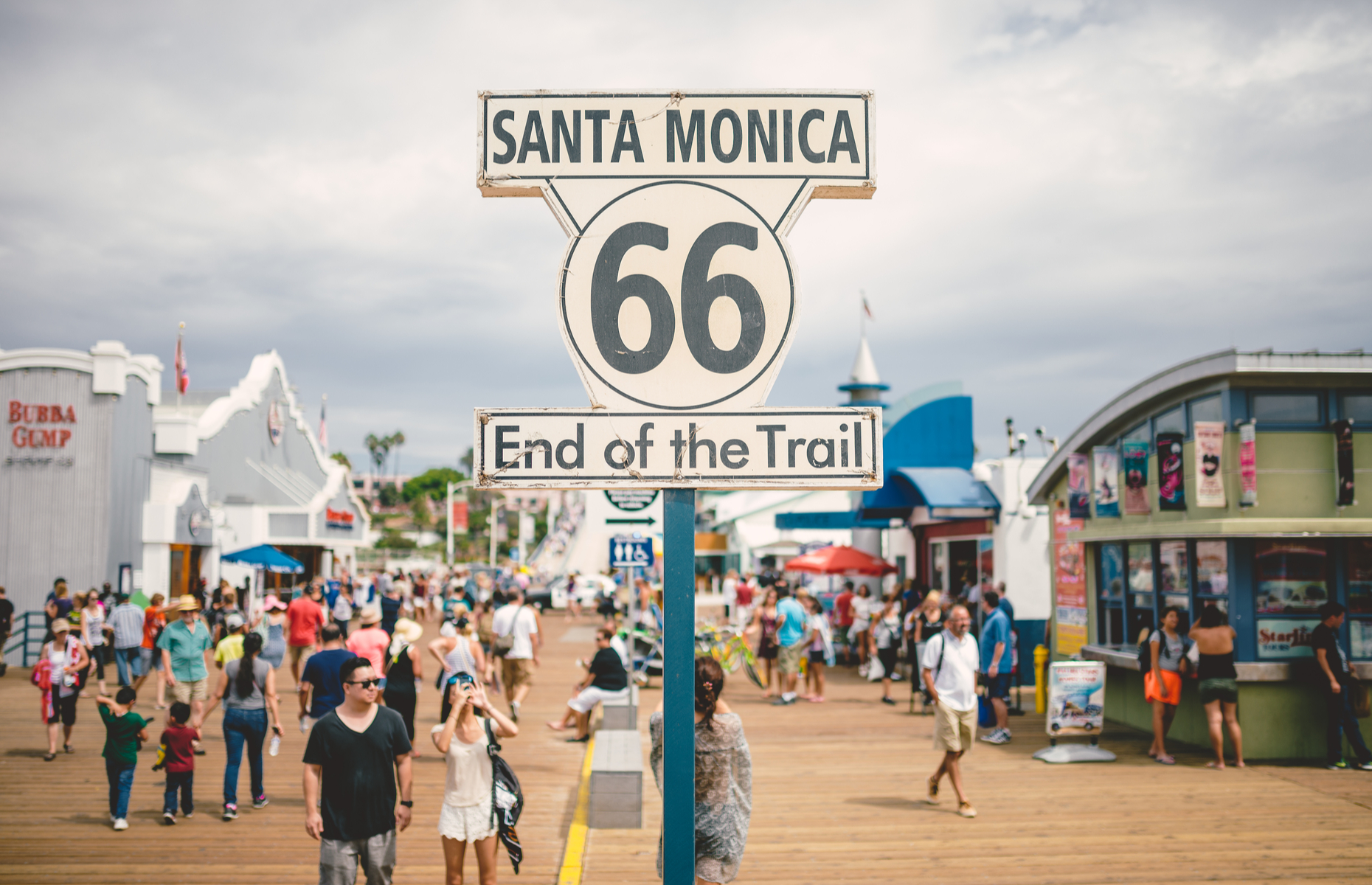 Santa Monica’s neighbour has a spirit all of its own. From funky Venice Boardwalk, where people sell flip-flops, tarot readings, jewellery and photo ops with pirates, to the flexers and posers that gravitate to outdoor gym Muscle Beach, everything’s a little different, and completely charming for it. 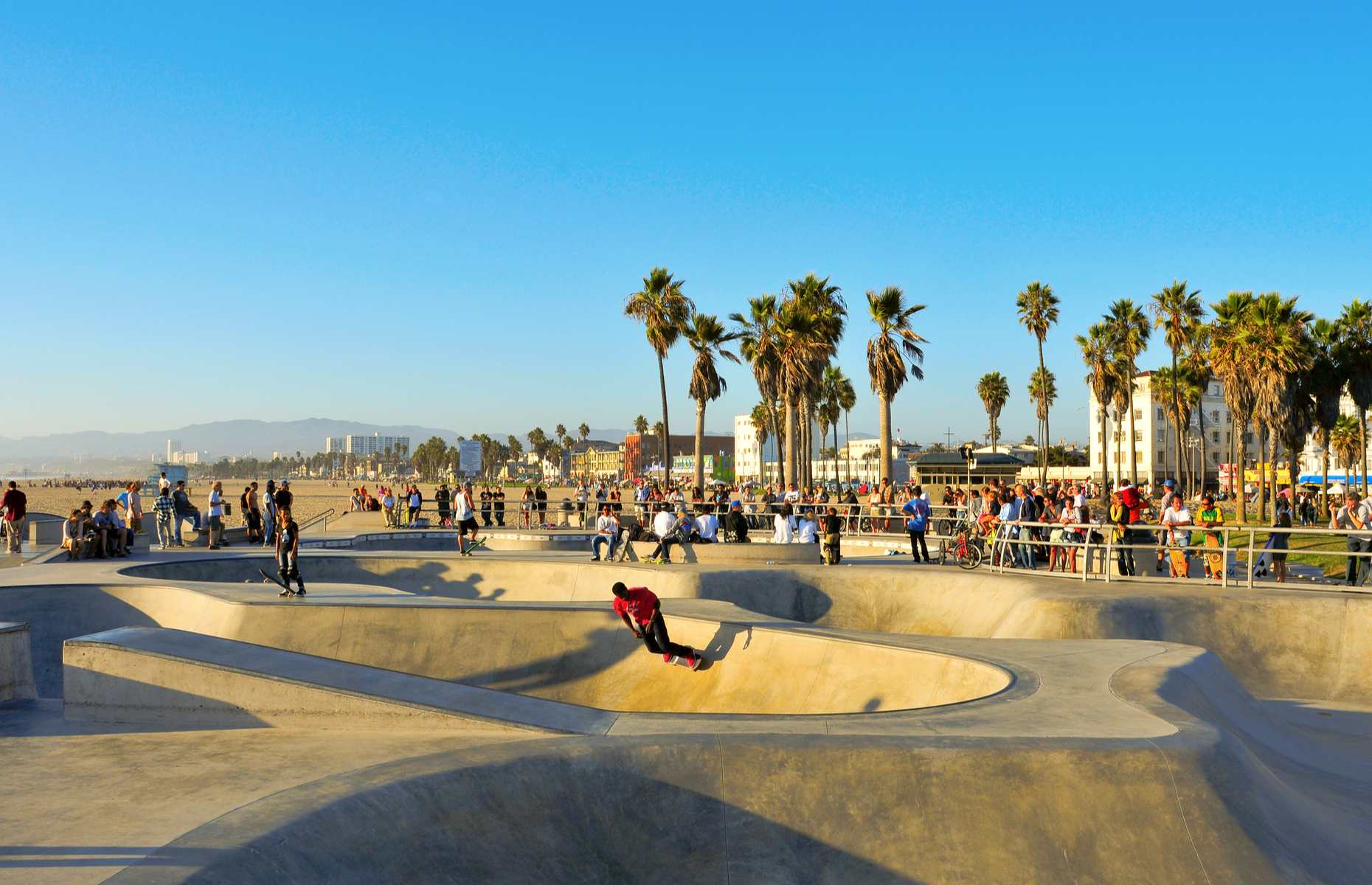 Head a little inland and there’s even a network of canals looped with footbridges, which is perhaps the only thing the neighbourhood has in common with its Italian namesake. That and maybe it’s fierce independence.

Venice Beach’s alternative and boho yet sleek vibe is hard to pin down. Hotel Erwin manages to reflect that in its huge rooms, many with balconies facing the sea and all with that certain funky something. 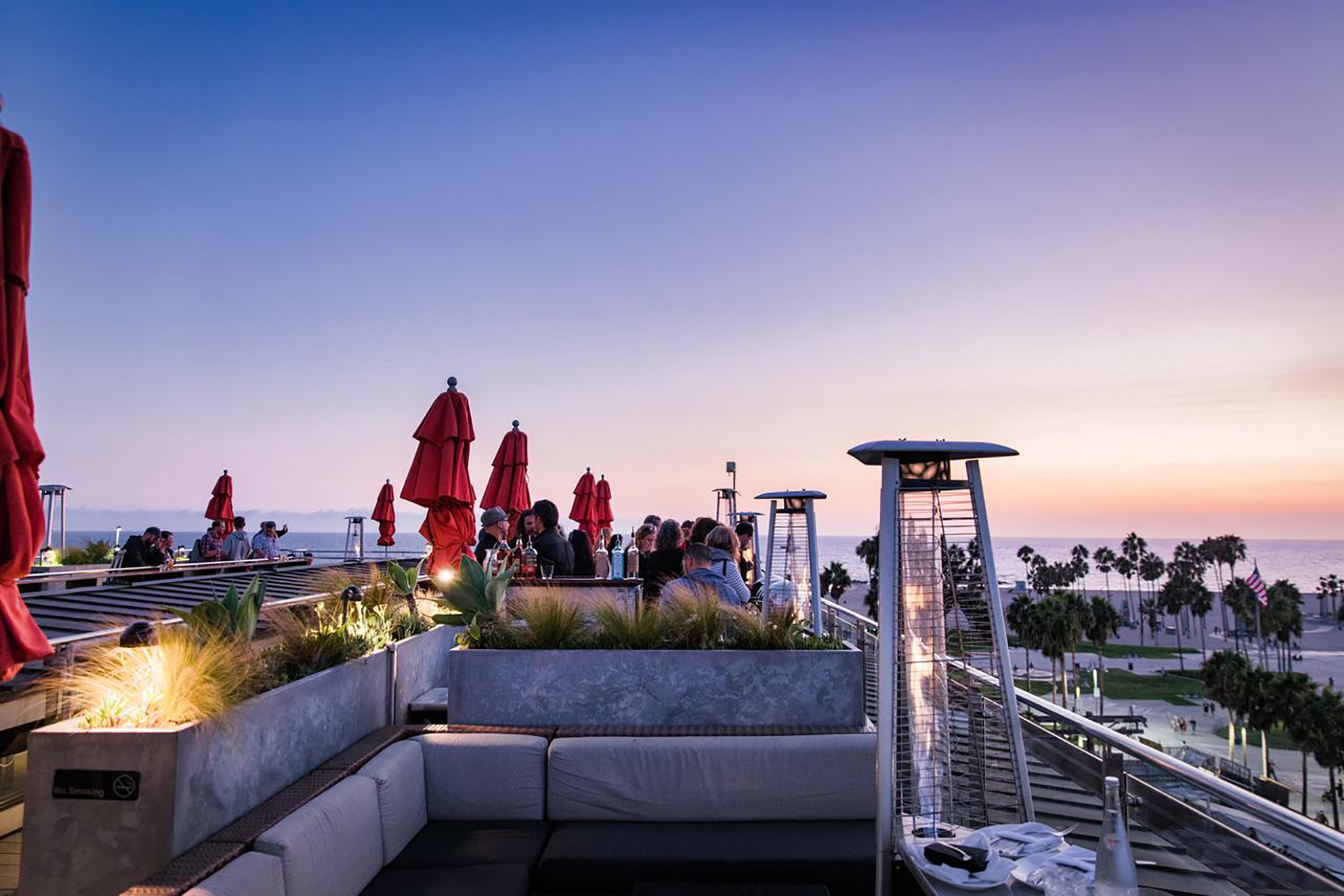 Allow plenty of time to explore Abbot Kinney Boulevard, a mile-long stretch set a little back from the beachfront. The pavements are flanked by spindly palm trees and treasure-filled boutiques, open-sided brunch spots, juice bars and eclectic galleries. On First Fridays the street fills with food trucks and hip, hungry crowds.