Explore Mykonos: the top things to do, where to stay & what to eat

Enchanting and blindingly bright by day, glitzy and alluring by night, Mykonos is the Aegean’s great seductress but, like every good hostess, she extends her welcome to everyone. Moored yachts rub anchors with fishing boats, haut-coiffed celebrities admire the sunset next to barefoot backpackers and homebound post-club revellers bump into rosy-cheeked families out early to worship the Greek sun. You can spend a lot of money and party hard on Mykonos, but if you want to avoid the overkill, you can do that too.

Mykonos Town (or Chora) has remarkably kept its traditional character. Pose by the windmills for that quintessential Greek island photo, decamp to Little Venice for the sunset and lose yourself in the labyrinthine backstreets, designed to help the residents ambush the pirates who roamed in the 18th century.

The harbour chic around the Old Port and the town beach defines the typical Aegean townscape, immediately recognisable from posters and postcards. It’s also the most commercialised and where the cruise crowds hang out in droves, so choose the timing of your strolls wisely. 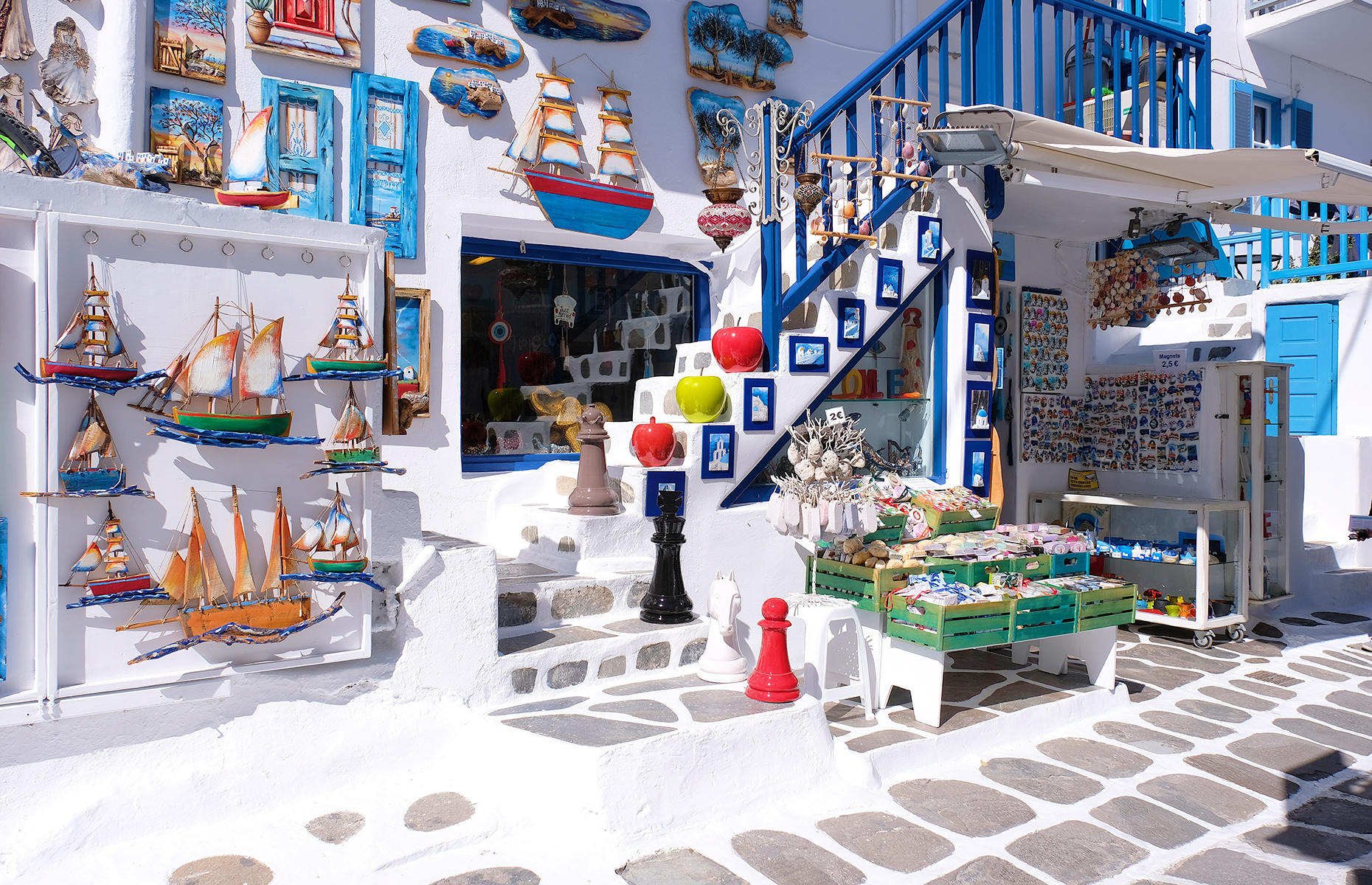 The large bay that almost bisects the island lies outside the mainstream tourist areas. Being the abode of migratory birds in the autumn, it is a protected area and claims two undeveloped beaches. Panormos beach is the biggest and, with two tavernas, the best served, while nearby Agios Sostis attracts with its deserted beaches.

Ano Mera, the other significant settlement on the island, suffers from being inland, but if you happen to drive by, make a stop for lunch as the prices here are way below those elsewhere. It also boasts the 18th-century monastery of Panagia Tourliani, a fine example of Italian baroque unique in the Cyclades. Its gilded temple, the pulpit and the episcopal throne were brought here all the way from Florence. 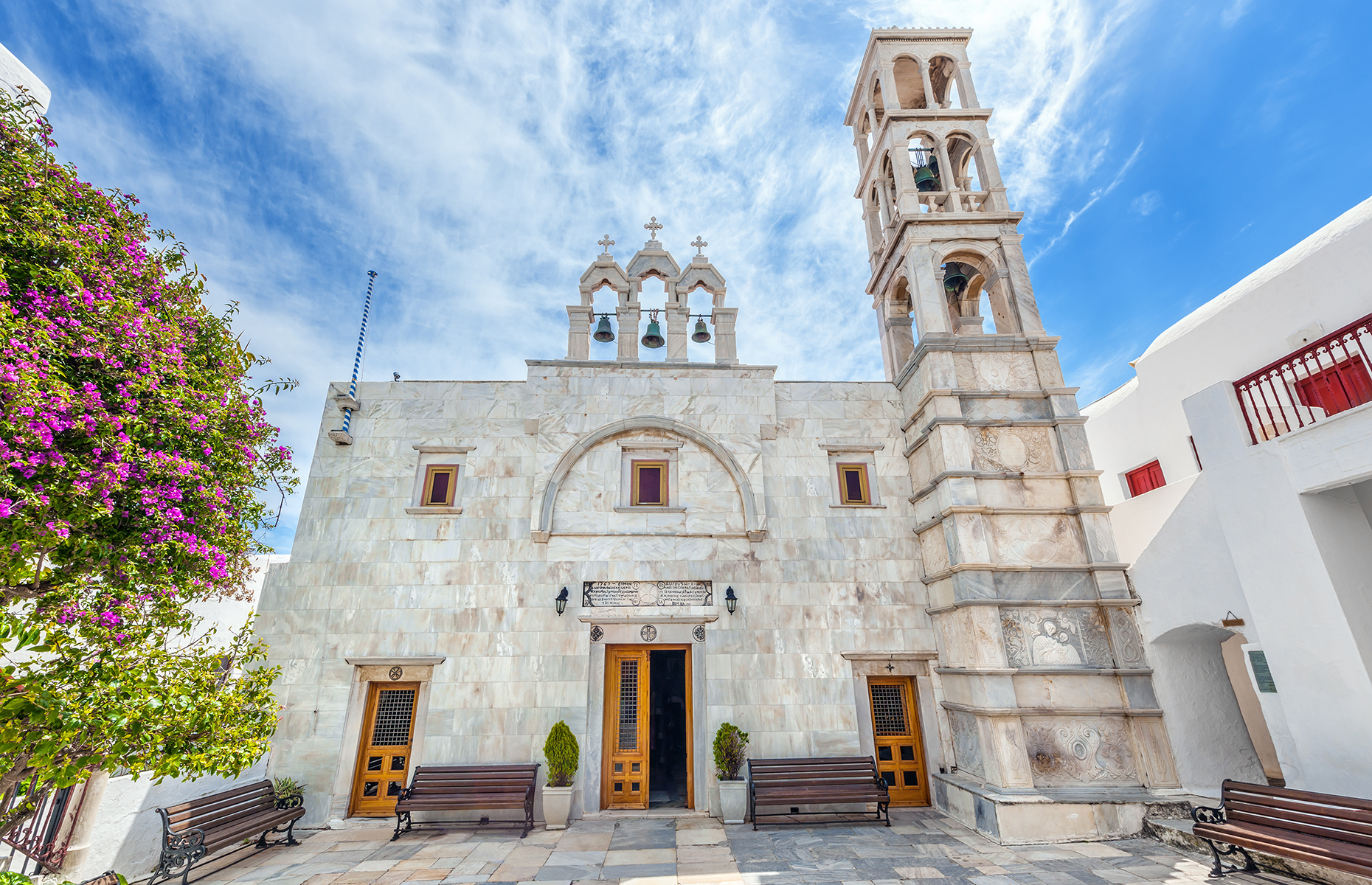 The best hotels in Mykonos

For a good cheap choice try the hostel-cum-glampsite Paraga at a great location close to a sandy cove and within walking distance of Scorpios beach club. If immersing yourself in the drink-and-dance culture is your thing, check in at Paradise, a buzzy resort offering tents, beach huts and bungalows on Paradise beach.

For a medium budget, try Manoulas Beach on Agios Ioannis, location for the shoot of the film Shirley Valentine. If you don’t mind the stiff climb, Mykonos View is the darling of TV crews and fashion photographers because of its sweeping views over Mykonos Town. However, by far the best choice is Leto, the town’s strikingly modernist VIP hangout, whose seawater pool and luscious gardens have welcomed A-list celebrities from Jackie Onassis to Monica Bellucci.

At the top end, the sky’s the limit. The nine hotels of the Myconian Collection are all stunningly built and atmospherically located. Try Korali, ten minutes beyond the town windmills, or Ambassador, lording over the popular beach of Platis Gialos. Finally, Cavo Tagoo halfway between the old and new ports is the locals’ recommended five-star – its Cycladic design set the standard subsequent hotels felt obliged to follow. 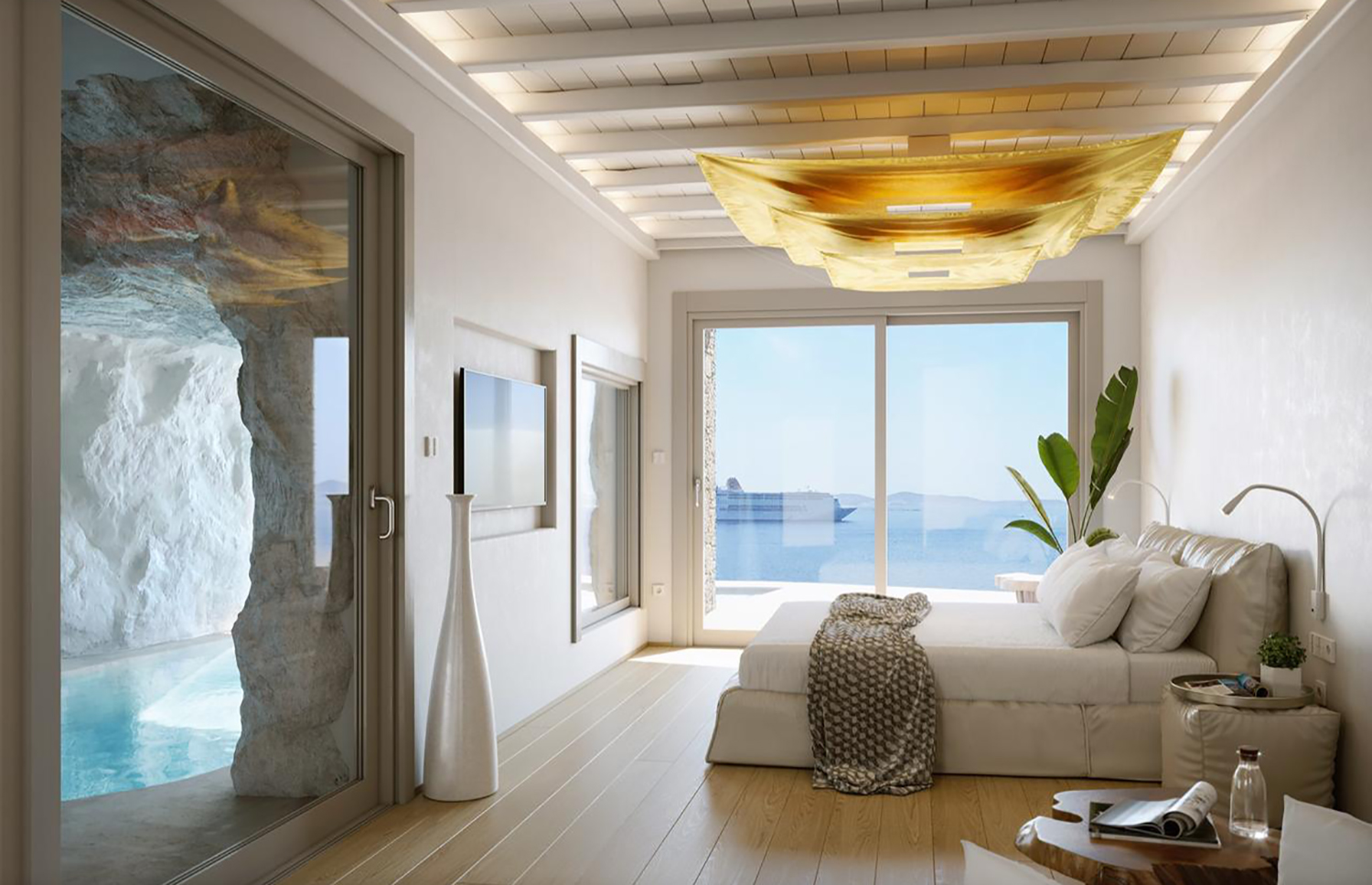 What to eat & drink in Mykonos

Every Greek island has its must-try dish and on Mykonos it’s louza, an air-cured pork delicacy, like a thick, fat-free prosciutto. A pork leg with its fat skimmed off is stuffed into a skin with the cure – salt, spices and oregano – placed outside the wrap to be absorbed slowly. It’s hung to dry from November to February to be eaten in spring and summer.

For an exceptional Greek meal nab a table at Bakaló in Lakka. Their Mykonian salad includes louza and for something more creative, try Avli Tou Thodori at Platys Gialos Beach. Nikolas Taverna at Paraga is best for seafood – the owners have their own fishing boat that comes in every evening with the day’s catch. Catari in the maze of Mykonos Town is the best Italian trattoria on the island while stylish Interni, a Mykonos institution near the Folk Museum, ups the ante (and the prices) with a delicious, international menu. Nothing, however, can compare with Matsuhisa at Hotel Belvedere that belongs to the legendary chef Nobu and is consistently rated as one of the top Greek restaurants. 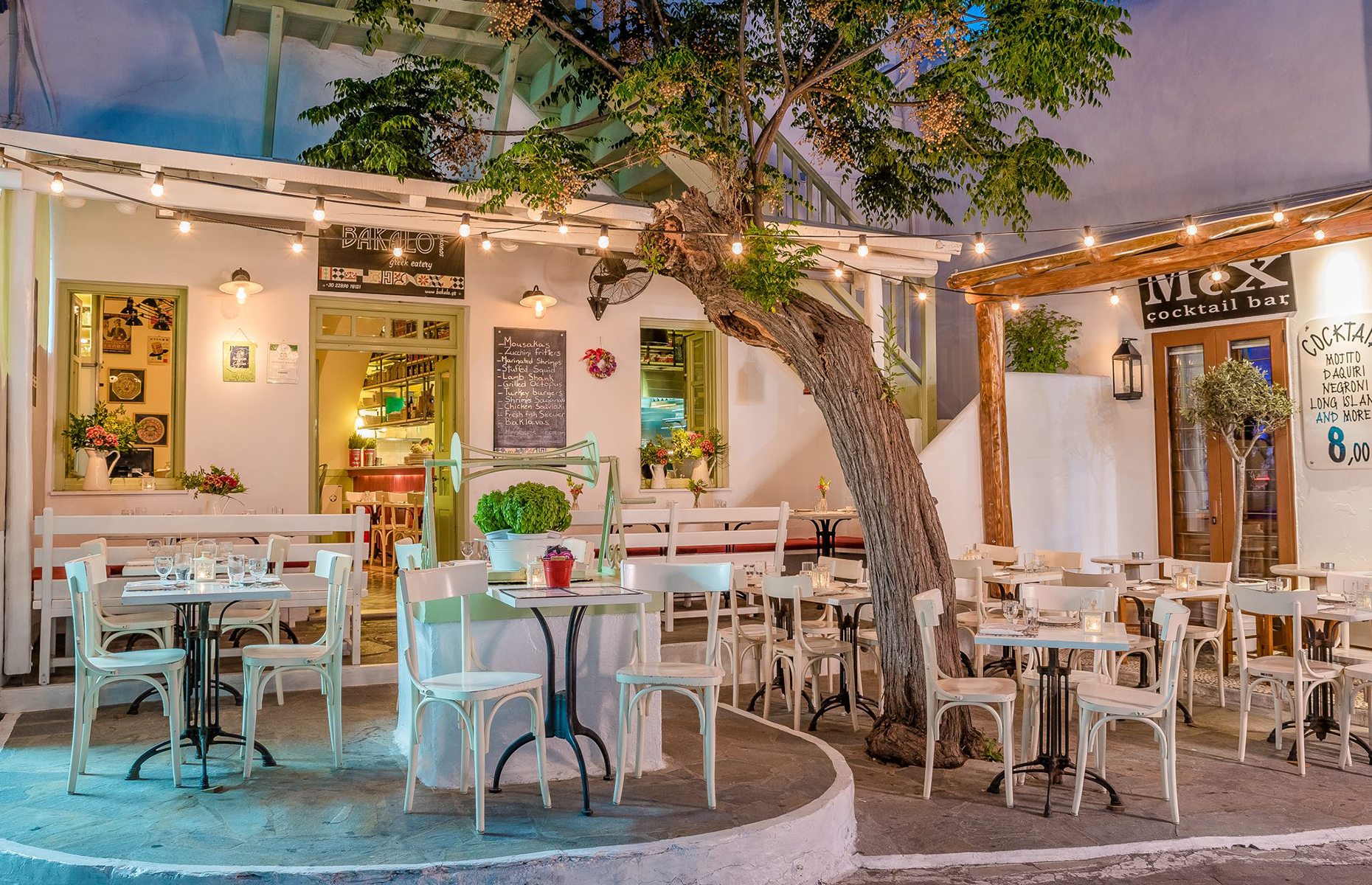 The top things to do in Mykonos

The beaches on Mykonos are long, sandy and wide, though come June they’re covered in a forest of umbrellas. As the summer meltemi winds come from the northeast, the safest beaches face southwest – Megali Ammos, Ornos and Agios Ioannis in order of distance from town. The south beaches are further away and are markedly more upmarket: one road leads to Platys Gialos and Psarou, another to Paraga and Paradise. Further out, Kalo Livadi attracts families, while Kalafati is the water sports hub of the island.

If you get up from your deckchair only once, make it to the island of Delos, the birthplace of Artemis and Apollo and one of the most important Greek UNESCO sites. Looted multiple times because of its wealth, Delos is a Hellenistic ghost town complete with merchant quarters, a theatre, and mansions with floor mosaics still in place. If you’re not awed by the Avenue of the Lions, you’ll be stumped by the views from the top of Mount Kynthos. 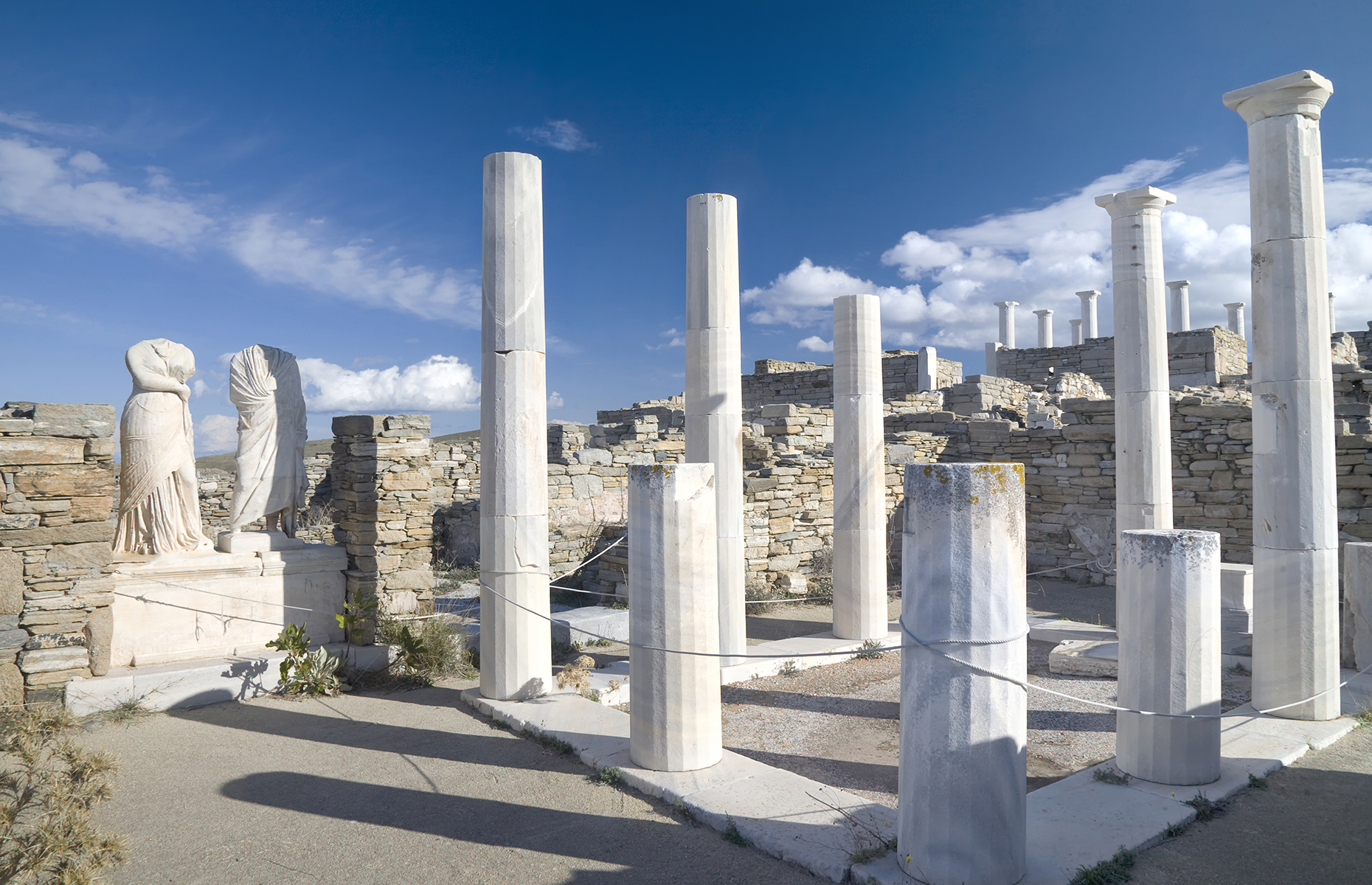 If you’re not here for the nightlife, then why bother? Mykonos attracts clubbers who are serious about their dancing, their music and their drinking. Start with cocktails in Little Venice or head for the bars in the alleys off the Old Port and end up at Cavo Paradiso, consistently voted one of the world’s top clubs by DJ Magazine, no earlier than 1am.

The trendiness of Mykonos can be traced to its decades-old popularity within the gay community who found here a tolerant attitude unique in the Eastern Mediterranean. Gay tourists are most visible around Chora’s oldest and best-known church, Paraportiani, within toddling distance of the two big gay clubs, Jackie O and Babylon, open till 6am. For a drink earlier in town everyone pops by Lola, decorated like a Moulin Rouge boudoir. Less in-your-face but no less friendly is Montparnasse at Little Venice that also stages cabaret shows. Two of the island’s beaches are predominantly gay: Jackie O runs a beach bar complex at Super Paradise, while Elia – incorporating the rocky section towards Agrari – has assumed the mantle of the current LGBT hotspot. 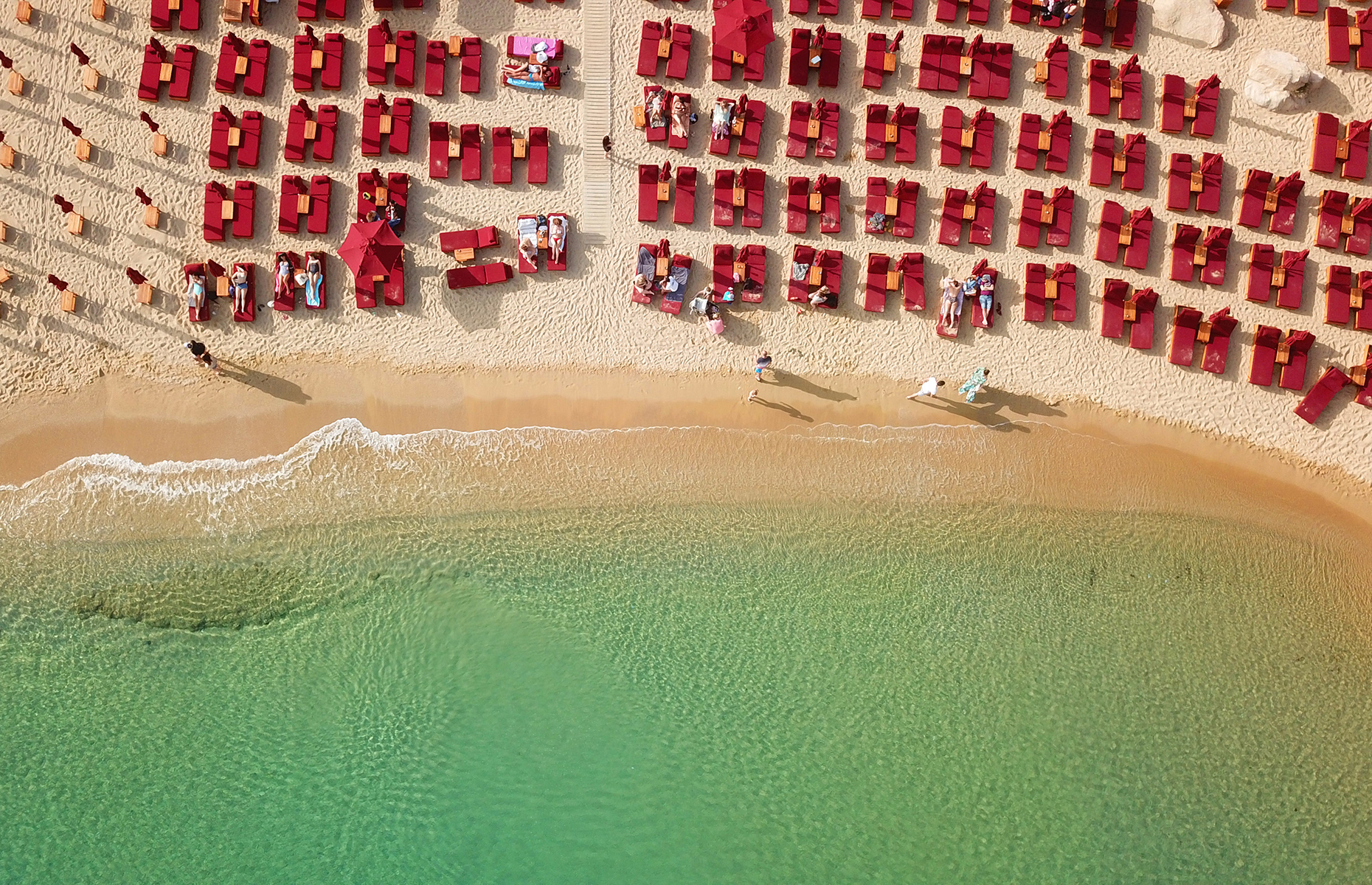 Start on that tan: with all the hype, it’s easy to forget that Mykonos’ original appeal was its beautiful, long sandy stretches, so pick up your sunscreen, wrap a towel around your body and hurry to your nearest beach.

Seek the sunset: kick off the evening in style by booking a balcony table at Katerina’s in Little Venice to sip a cocktail as intoxicating as the sunset views.

Get your night fix: get on one of the regular buses that run to Paradise beach (24/7 in July-August) to unleash your moves at Cavo Paradiso where, during the high season, star DJs appear every night. 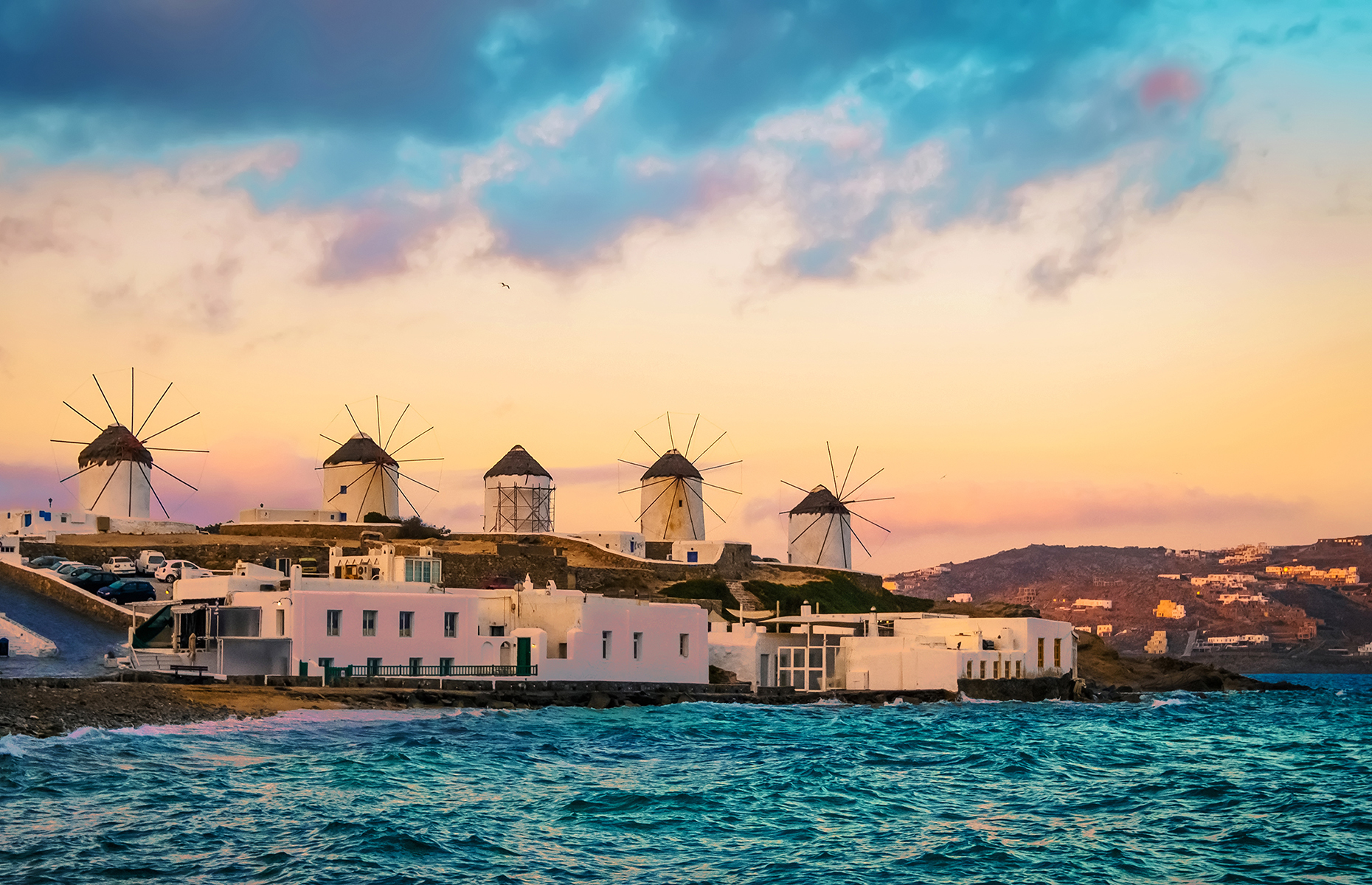 Opt for a quiet swim: if you’re tired of the tourist melee, go to Lia, the least crowded of the southern beaches. There is no piped music and even the deckchairs are further apart so that you can relax in relative privacy.

Go wine tasting: check out Vioma, the island’s showcase vineyard and organic farm and try the liaston, a sweet wine that’s produced by letting the grapes dry in the sun for a week.

Flash the cash: have a roam around the Mykonos Town boutiques that sell gear as stylish as you’ll find in Paris or Milan and make sure you stop by Minas, an old-style jewellers – past clients include Aristotle Onassis, the ex-King and Queen of Greece and the Rolling Stones.

Jump on the Delos boat: yes, you’re here for the sun, the sea and the splurge, but missing out on one of the truly incredible sites of Greece is unforgivable. When you walk along the Avenue of the Lions, you’ll see what the fuss was about. 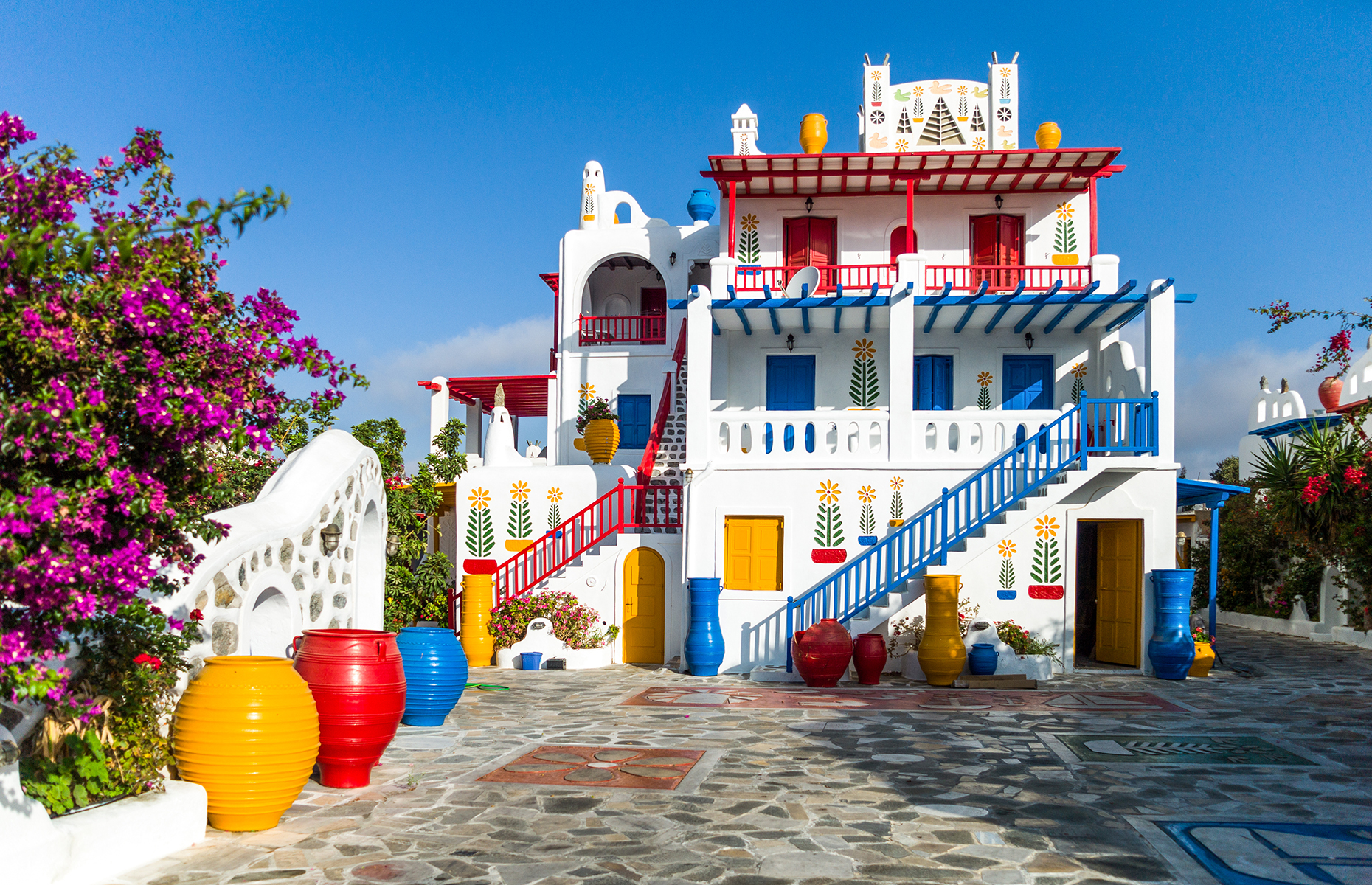 Discover a virgin beach: take the dirt road north of Ano Mera to the unsullied beach of Fokos whose deep waters, steep rocks and rough sand seem a million miles away from the commercialised atmosphere of the south.

Enjoy an impromptu beach party: go to the small, secluded Kapari beach where you’ll find young locals having a BBQ, playing the guitar and drinking beer until late at night. Everyone’s welcome!

Use our map to help you navigate around our favourite places in Mykonos: