Navigating nine counties and over 1,500 miles of Ireland’s western seaboard, the Wild Atlantic Way bills itself as Europe’s longest road trip. Don’t expect infinite highways spilling into the horizon, though. This gear-shifting route will have you sweeping corners, brushing humpback hills and sawing your steering wheel across the most magnificent of rugged coastline. From off-road exploration and postcard pubs to the infamous Irish ‘craic’, here’s our guide to the route’s must-visit sights, the top things to do and where to eat and sleep.

Given the distances of Ireland’s far-flung peninsulas and headlands, the Wild Atlantic Way is deceptively circuitous. Factor in ten days if completing the entire road-trip, or for shorter trips, map around 100 miles into your daily itinerary. From Cork in the south, Shannon in the west and Donegal in the far north, you’ve a pick of several exciting gateways to springboard you into your adventure. Here are a few good places to begin.

Located at the tip of County Donegal, Inishowen is the most northerly frontier along the Wild Atlantic Way. As one of Ireland’s most unspoiled peninsulas, here you can leave your lone footprints on beaches like Culdaff strand, hike amid the sheep-blotted hillsides of Butlers Glen or photograph the Northern Lights from stunning Malin Head.

Getting there: Belfast is the best entry point and is served by two airports which lie 65 miles east of County Donegal. Crossing the Irish Sea? Belfast Port and Larne have daily ferry crossings from Britain.

The largest city on the Wild Atlantic Way, the City of Tribes is Ireland’s ultimate Celtic hub. Here, locals and tourists throng the cobbles for traditional music, arts and lashings of Guinness and fresh oysters. Heading west? Visit the mystical monastery of Kylemore Abbey or the haunting landscapes of the Burren region if venturing south.

Getting there: Ireland West Airport is the most convenient gateway to the region, it sits 55 miles from Galway City. 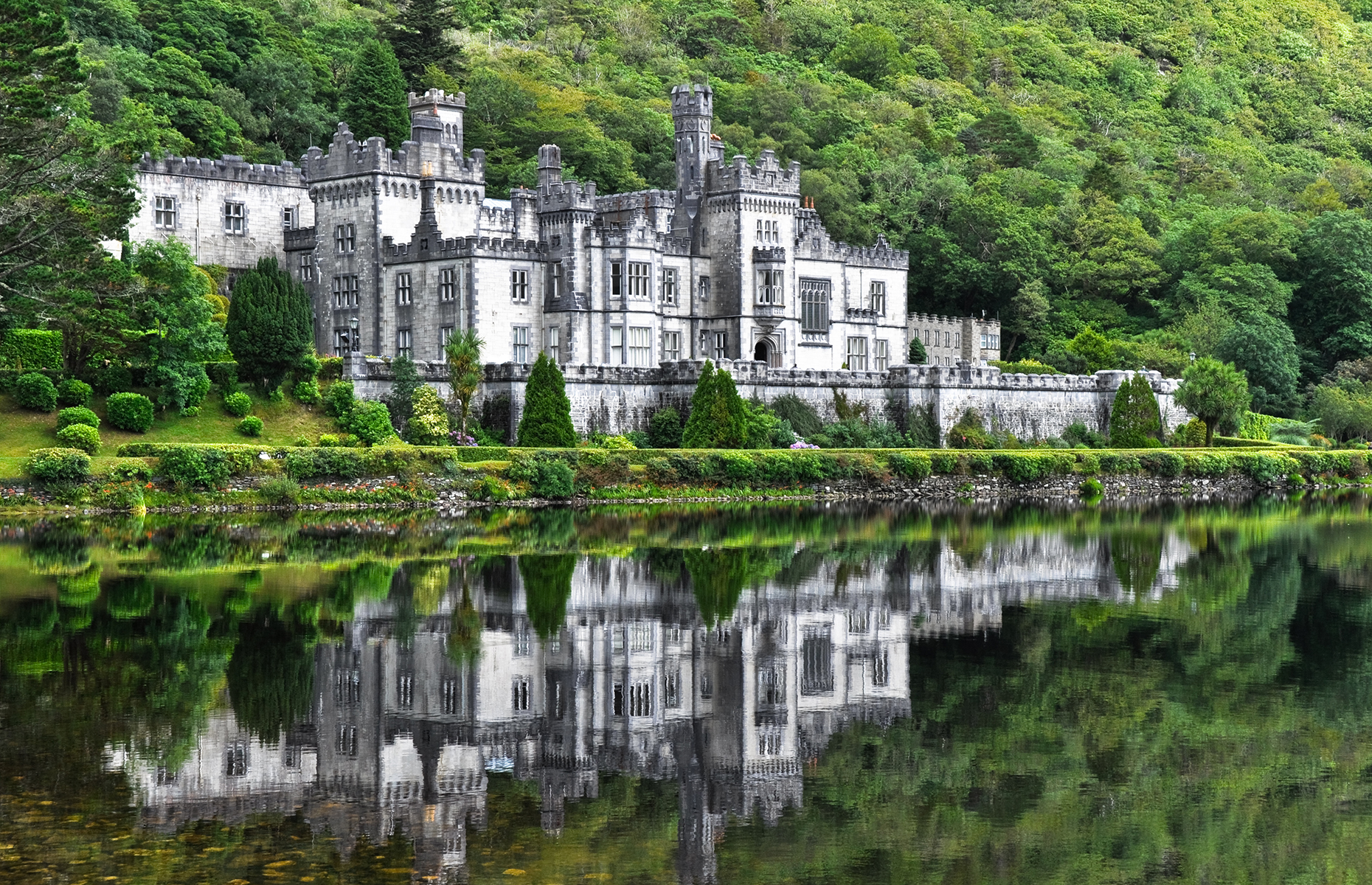 The gourmet capital of Ireland, this coastal Cork town famed for its seafood restaurants makes the perfect southern start point. Begin by wandering the town’s brightly-painted shop fronts, sample a fresh-off-the-trawler lunch at the acclaimed Fishy Fishy restaurant, or discover the history of the 17th-century Charles Fort.

Getting there: Cork Airport is the main hub for Ireland’s southern seaboard and serves twelve UK airports.

Highlights along the Wild Atlantic Way

Whether experiencing the splendour of some of the coastline’s blockbuster tourist attractions or discovering the solitude of off-the-beaten-track sandy beaches, the Wild Atlantic Way offers infinite screensaver moments.

The Cliffs of Moher

Cascading 390 feet into the coast of County Clare, the Cliffs of Moher rank as one of Ireland’s most-visited wonders. With armies of coach bus tourists and Instagrammers descending upon its epic edges daily, try jigging around their schedule: visit at dawn or, better still, go in the evening to catch a spectacular cliffside sunset. 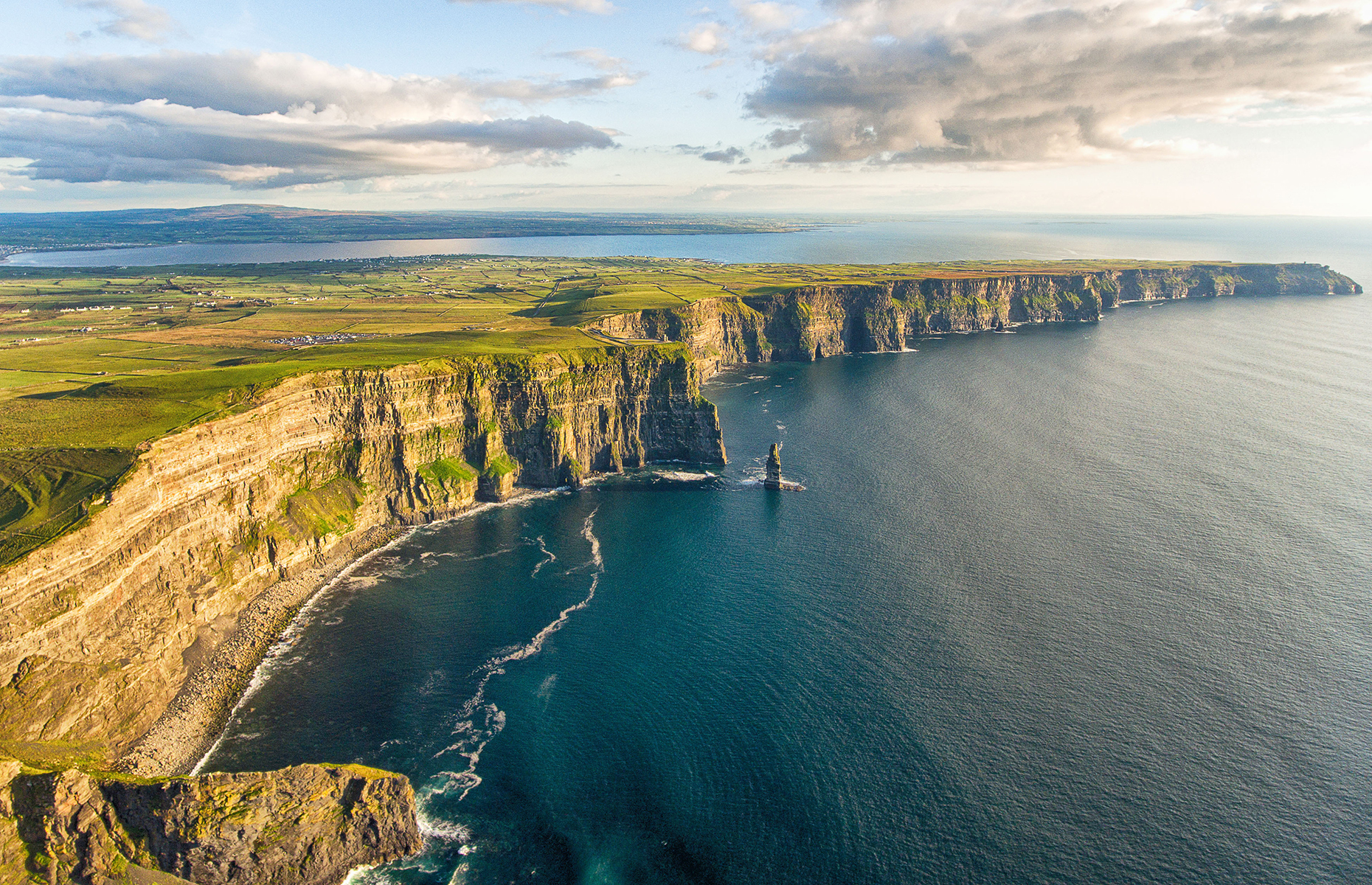 Across the swells in County Galway, sit the desolate landscapes of Connemara. Home to Ireland’s largest Gaeltacht (Irish-speaking) area, the region is a remote sub culture of proud Celtic tradition. Visit the welcoming village pubs of Rosmuc and Carna for a great local snapshot.

The Ring of Kerry

If seeking a real scenic thrill, the Ring of Kerry is the route’s most photogenic spot. Looping around Ireland’s highest mountain range, the MacGillycuddy Reeks, every turn rewards with spectacular vistas. Need to stretch your legs? Head for a picnic at the stunning Inch beach.

Where to stay along the Wild Atlantic Way

Given the nature of a road-trip, the Wild Atlantic Way is largely a one-night stop-and-go affair. That allows tourists to enjoy a mix of accommodation options, from traditional B&Bs and luxury spa resorts to quirky self-catering rentals.

Check-in to the super stylish Mayo’s Ice House Hotel in County Mayo. Seeking some alternative edge? Dzogchen Beara is a Buddhist retreat in the wilds of West Cork which offers meditation retreats to those seeking some Irish Zen.

For parking your camper van

You can always combo-up on your sleeping and driving options by going mobile and hiring a camper van. Negotiating a larger berth vehicle along the craggy lanes of the Ring of Kerry may be daunting for the novice driver but there are plenty of compact options from the likes of bunkcampers.com.

Where to eat along the Wild Atlantic Way

Flanked by bountiful seas and a fertile agri-haven of meadows and mountains, it’s little surprise the Wild Atlantic Way also doubles up as a Hibernian foodie highway. Here's where to eat along the route:

Amid the myriad dining options, nothing quite beats the cosy Gaelic hospitality experienced in a traditional Irish pub. For such an ambience, pull up a pew at Hargadon Bros in Sligo for its Killary Harbour crab or enjoy a pint in Farren’s of Malin Head – Ireland’s most northerly bar. Looking for the perfect seafood meal? Try The Fleet Inn in the bustling harbour village of Killybegs or Harry’s in Bridgend for its famous fish and chips.

A smorgasbord of everything, from top restaurants to quirky food-stops, pepper these parts, where farm-to-fork is a way of life rather than a movement. For fine dining, visit Gregans Castle in Ballyvaughan or Michelin star-winning Loam in Galway City. The Burren Smokehouse in Clare offers the finest salmon on the island and craft beer-lovers should savour the goods of the Galway Hooker brewery in Oranmore.

Gourmands, prepare to luck out. Many restaurants now offer Wild Atlantic Way menus, inspired by local produce – think mountain lamb, fresh lobster and local game. Some of the highlights include Muckross Park Hotel in Killarney, Fishy Fishy in Kinsale or the quaint Teddy O’Sullivan’s in Kilmacalogue for its freshly trawled mussels. Have a sweet tooth? Make a beeline for Murphy’s Ice Cream in Dingle, a purveyor of fine gelato with a Gaelic twist.

Being within such tempting proximity, Ireland’s islands make for the most inviting exploration. Inis Meain, the most traditional of the Aran Islands, can be reached easily by ferry from Doolin. Dursey in West Cork is Europe’s only island reachable by cable car, while the Skellig Islands, ancient monastic settlements bursting out of the Atlantic like jagged pyramids, are perhaps Ireland’s most magnificent outpost. 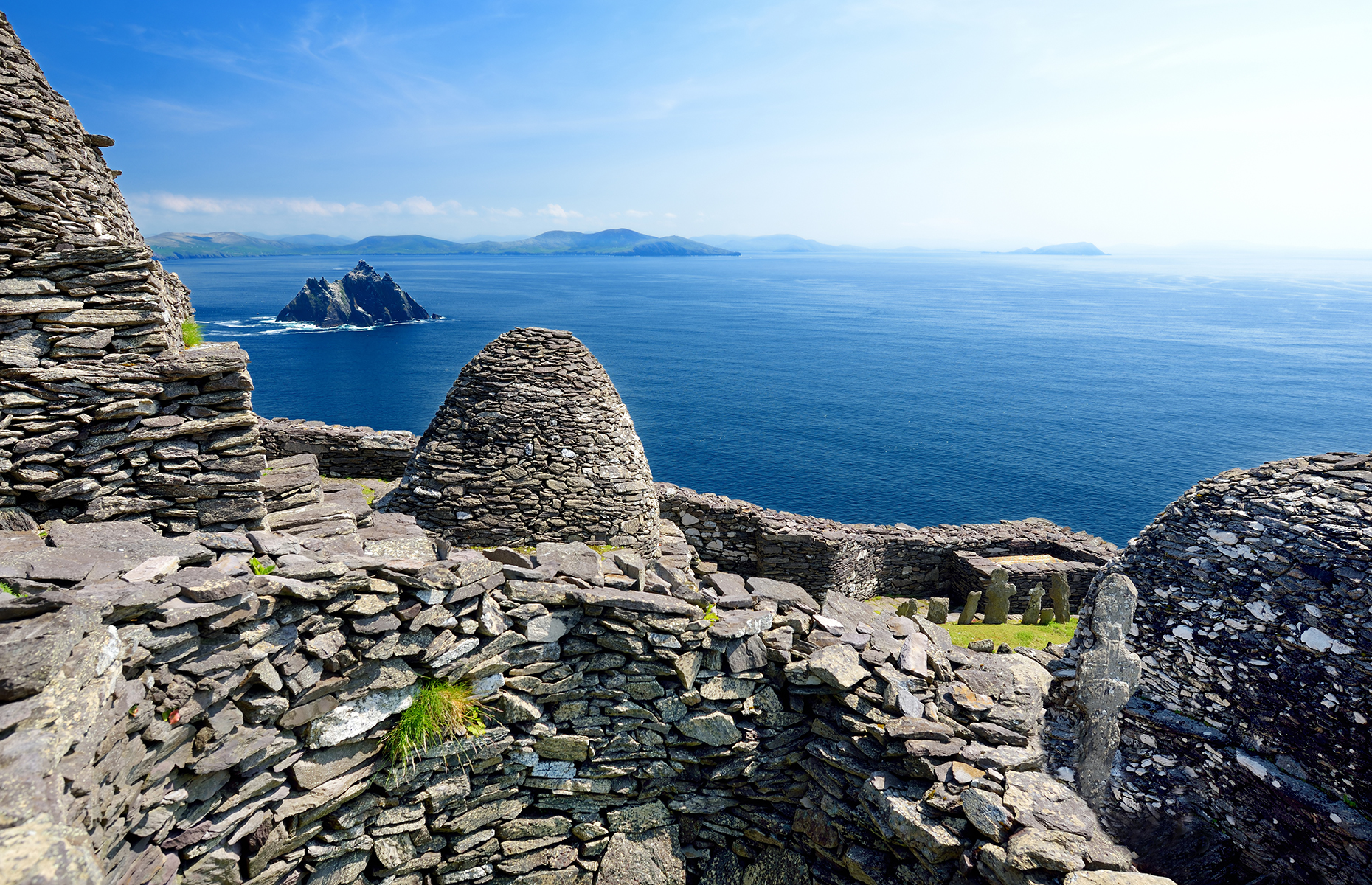 Stunning mountain passes can offer the perfect short-cut for Ireland’s peninsulas. The Healy Pass, a serpentine route, which parts the counties of Cork and Kerry, is Ireland’s most spectacular route. Moll’s Gap is a horse and carriage dotted postcard roadway sequestered in the heart of Kerry’s Iveragh Peninsula. Kate Kearney’s Cottage, a pub at the mouth of the route, makes for the most charming pit stop.