Explore Toronto: the top things to do, where to stay & what to eat

Toronto is about finding the unexpected. While the Canadian city has big-hitting sights like the CN Tower and Royal Ontario Museum, visitors leave talking about summer evenings on the Lakeshore, the quiet beaches east of the city, the dim sum place they stumbled upon or the cocktail they had with new friends. And the food, the incredible food, in one of the world’s most culturally diverse cities.

At Midtown’s heart is Yorkville, the city’s most upmarket spot and home to some of the most expensive real estate in the world. In the glitzy ‘Mink Mile’ shopping district, you’ll find luxury Canadian department stores Holt Renfrew and Hudson’s Bay. Next to Yorkville is Koreatown and the boho district around the University of Toronto.

The city centre is always buzzing with activity: there’s the CN Tower, the Financial District and the Entertainment District, where the Toronto International Film Festival (TIFF) rolls into town every September. For music and theatre, head to The Princess of Wales Theatre and the TIFF Bell Lightbox. Alternatively, catch a game at the Rogers Centre which hosts the Toronto Blue Jays, a major league baseball team, throughout summer. Ice hockey fans – that’s to say, Canadians – follow games at the Scotiabank Arena (formerly known as the Air Canada Center). 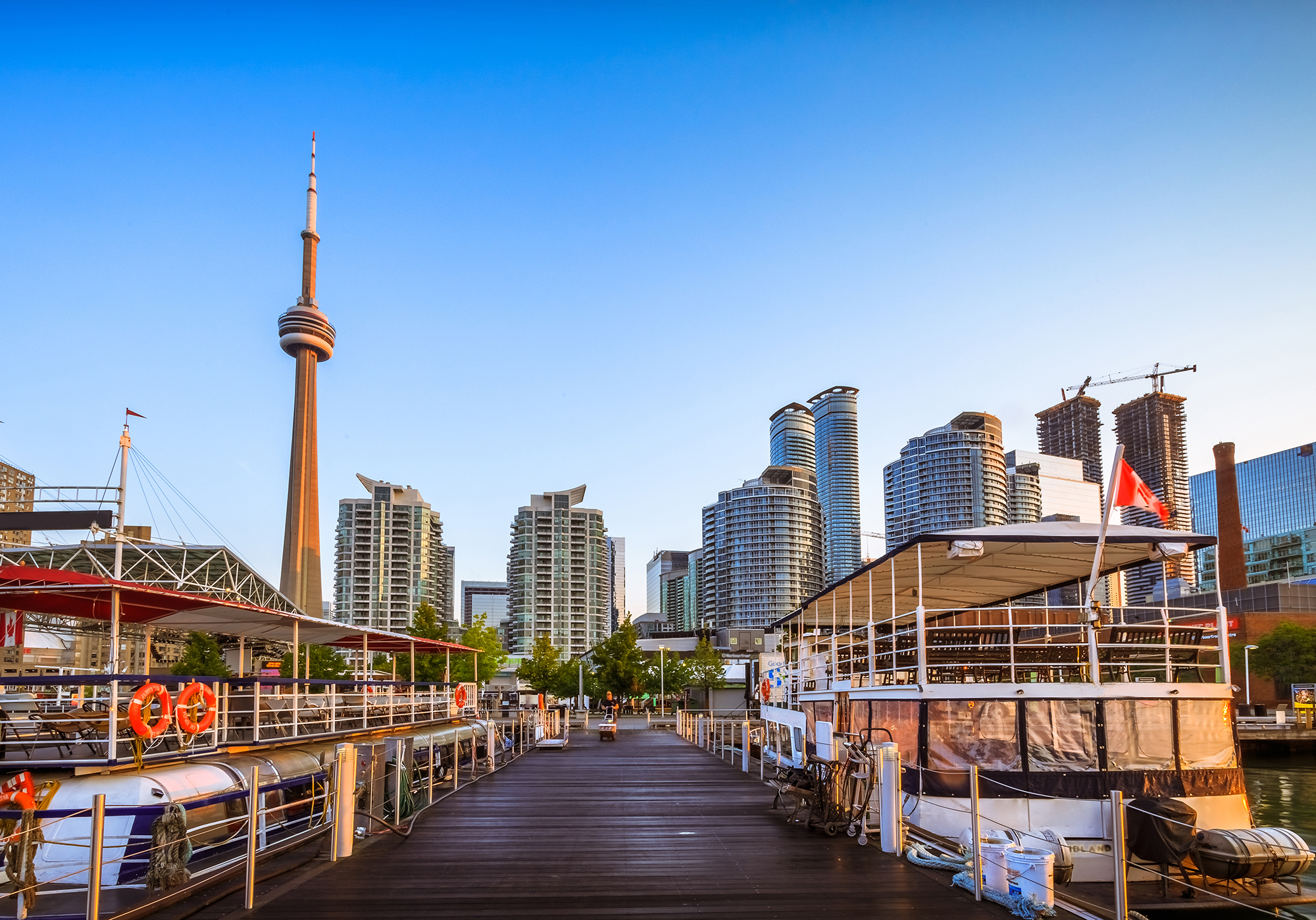 West along Queen Street West (QSW), you’ll find some of Toronto’s best restaurants, bars and independent shops. In the last decade or so, this neighbourhood has become packed with vinyl stores, oyster shacks, coffee shops and craft breweries. Head to Ossington, a main street off QSW, and check out Canadian restaurant Boralia, Bellwoods Brewery and Crafted Coffee. Out west are the neighbourhoods of Little Italy, Little Portugal and Chinatown – each must-visits for their fabulous food.

Head further west and retreat to High Park, a lush green space in the busy city. From there, visit the surrounding areas. East of the park is Roncesvalles Village, packed with brunch spots, bars and restaurants, and north is The Junction, one of the city’s most up and coming neighbourhoods. There are more than 200 independent businesses such as craft beer bars and vintage homeware stores. To the south of the park, alongside Lake Ontario, is the tranquil Sunnyside waterfront. 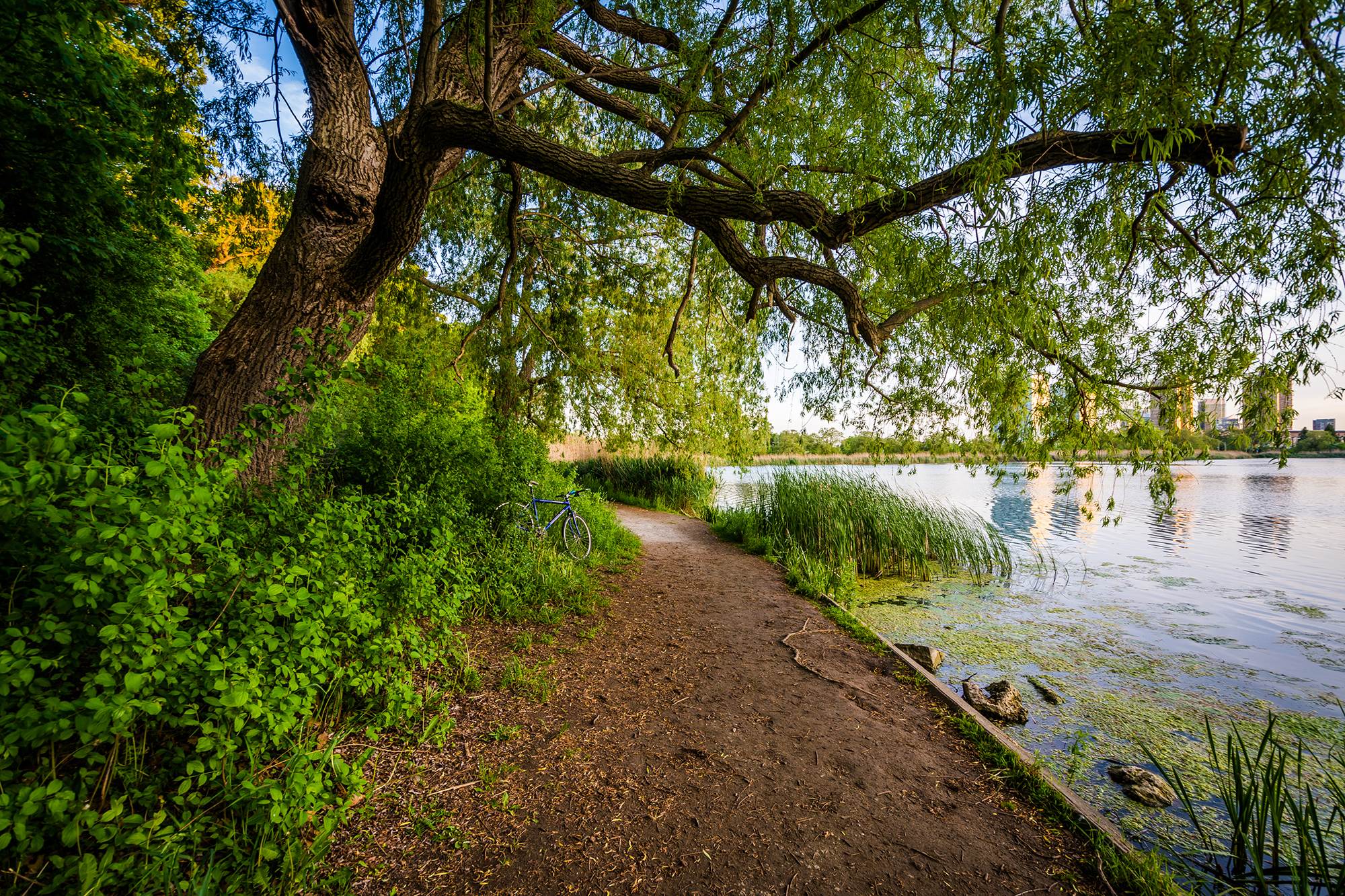 ‘Go West’ was long the mantra for Toronto’s creative types but the Eastside has seen a resurgence over recent years. A raft of new openings have put this neighbourhood on the map, from superlative burger joint The Burger's Priest to one of Toronto’s best breweries, Godspeed Brewery. Leslieville's reputation as a hotspot for nightlife continues to grow, while nearby you’ll find Little India and the Gerrard India Bazaar. Along Lake Ontario this side of town are The Beaches with a small-town vibe.

The best hotels in Toronto

Toronto is a small city with a good transit system, so staying in the centre makes sense. For refined luxury, the Shangri-La Hotel Toronto, located in a gleaming tower downtown, is a great option. The Four Seasons Hotel Toronto in Yorkville is the company’s flagship residence and Michelin-starred chef Daniel Boulud is behind the restaurant. Nearby, also with a celebrated restaurant, is the classic Hazelton Hotel (it’s great for celebrity spotting too).

Away from the large corporate hotels, check-in to the quirky Drake Hotel. The rooms are stylishly decorated with original art adorning the walls. 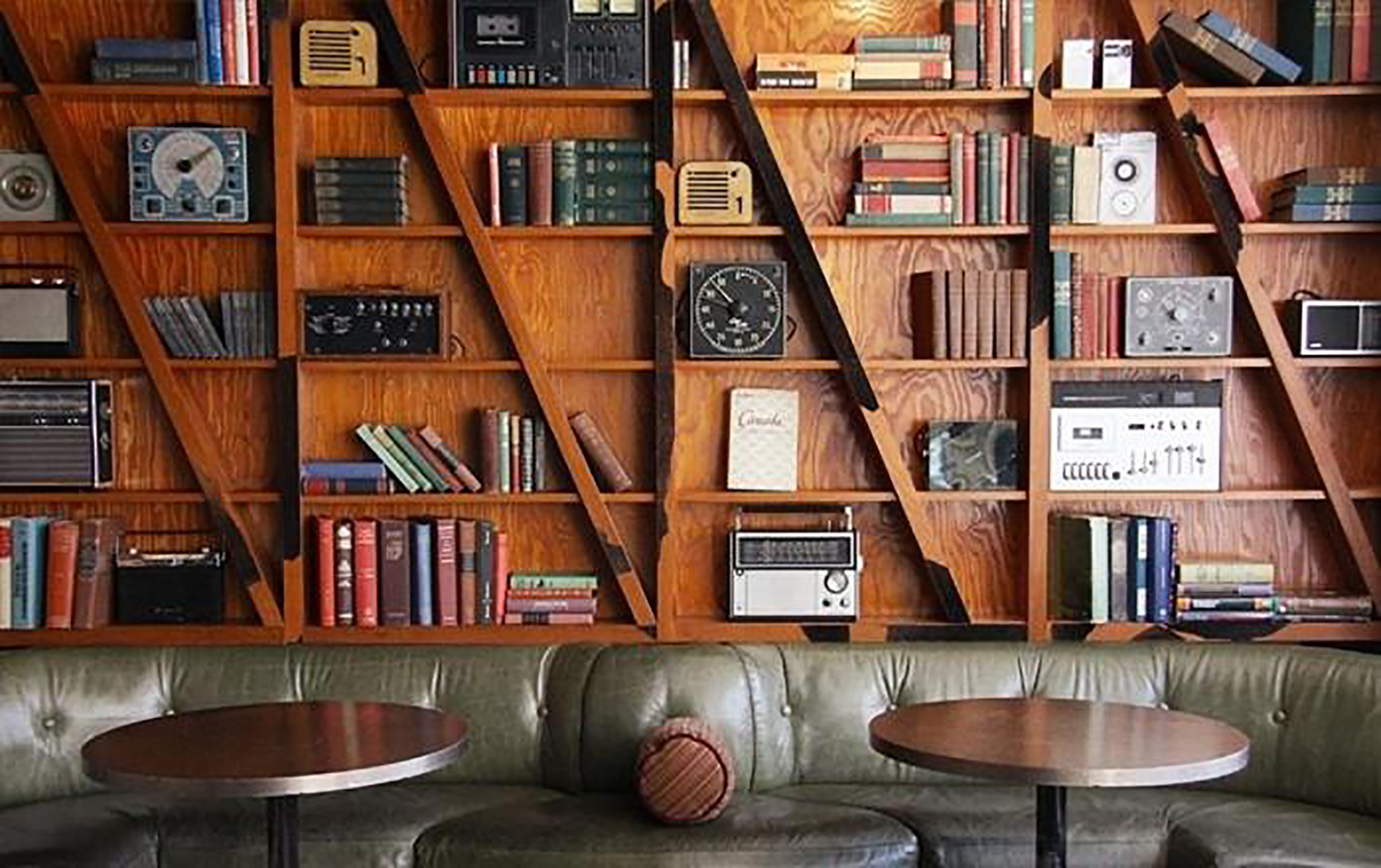 What to eat in Toronto

With more than 160 languages spoken in the city, Toronto is one of the world’s most diverse places on the planet. Naturally, different cultures and foods have permeated the city. Hankering after Eritrean comfort food? You’ll find it in Toronto. Looking for northern Portuguese specialities? You can get it here too. Until recently, traditional Canadian cuisine conjured up images of Montreal speciality poutine (chips, gravy and cheese curds), butter tart, and maple syrup with everything. However, there are now more places going back to the country’s roots and putting the emphasis on Canadian-sourced ingredients.

Walk into a restaurant like Boralia and you’ll find venison liver parfait or bison ribeye. At Canoe, you’ll find refined dishes like Ontario burrata with toasted seaweed and tea-smoked duck with Niagara pear. But where Canada really excels is seafood: lobster, salmon, cod and oysters (try the latter at Oyster Boy on Queen Street West).

If you’re looking for a drink, cocktails are top of the list. Speakeasy-style joints behind unassuming doorways or chic rooftop bars are favourite places for a drink. The craft beer scene is also exploding in Toronto thanks to changes in the licensing laws. Check out Bellwoods Brewery, Indie Alehouse, Great Lakes Brewery and the unmissable Godspeed Brewery.

The top things to do in Toronto

Summer or winter, Toronto has a range of high-level sports teams to get behind, whether it’s from a bar stool or the stadium seats. Ice hockey is the country’s biggest sport. The Maple Leafs is Toronto’s national team and they play at the Scotiabank Arena during the winter. Over summer, many Torontonians throw their support behind the Toronto Blue Jays baseball team who play at the Rogers Centre.

Explore the waterfront and islands

Lake Ontario can also be enjoyed cityside with a walk along the Water’s Edge Promenade. End up at the Harbourfront Centre where there are free concerts throughout the summer. 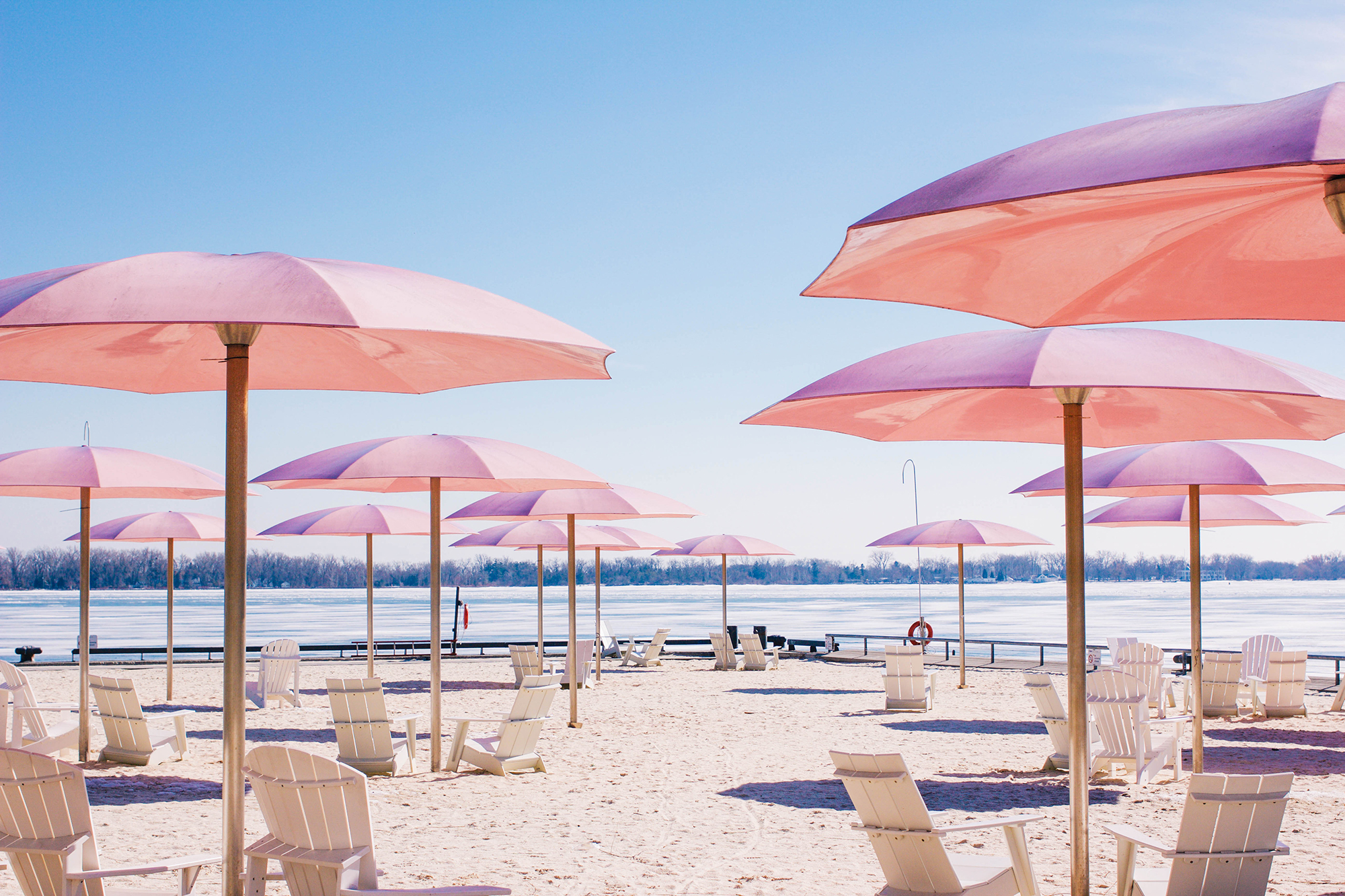 The Royal Ontario Museum is one of the most innovative and extensive in the world. It opened in 1914 and has maintained its focus on art and world culture, now with more than six million objects and 40 galleries. The Art Gallery of Ontario is similarly well-regarded globally and has one of the best collections of Canadian and indigenous art, alongside some European masterpieces.

Toronto is an accessible city. It’s compact so you can walk between neighbourhoods and there’s an excellent public transport system with a subway, buses and eye-catching bright red streetcars. 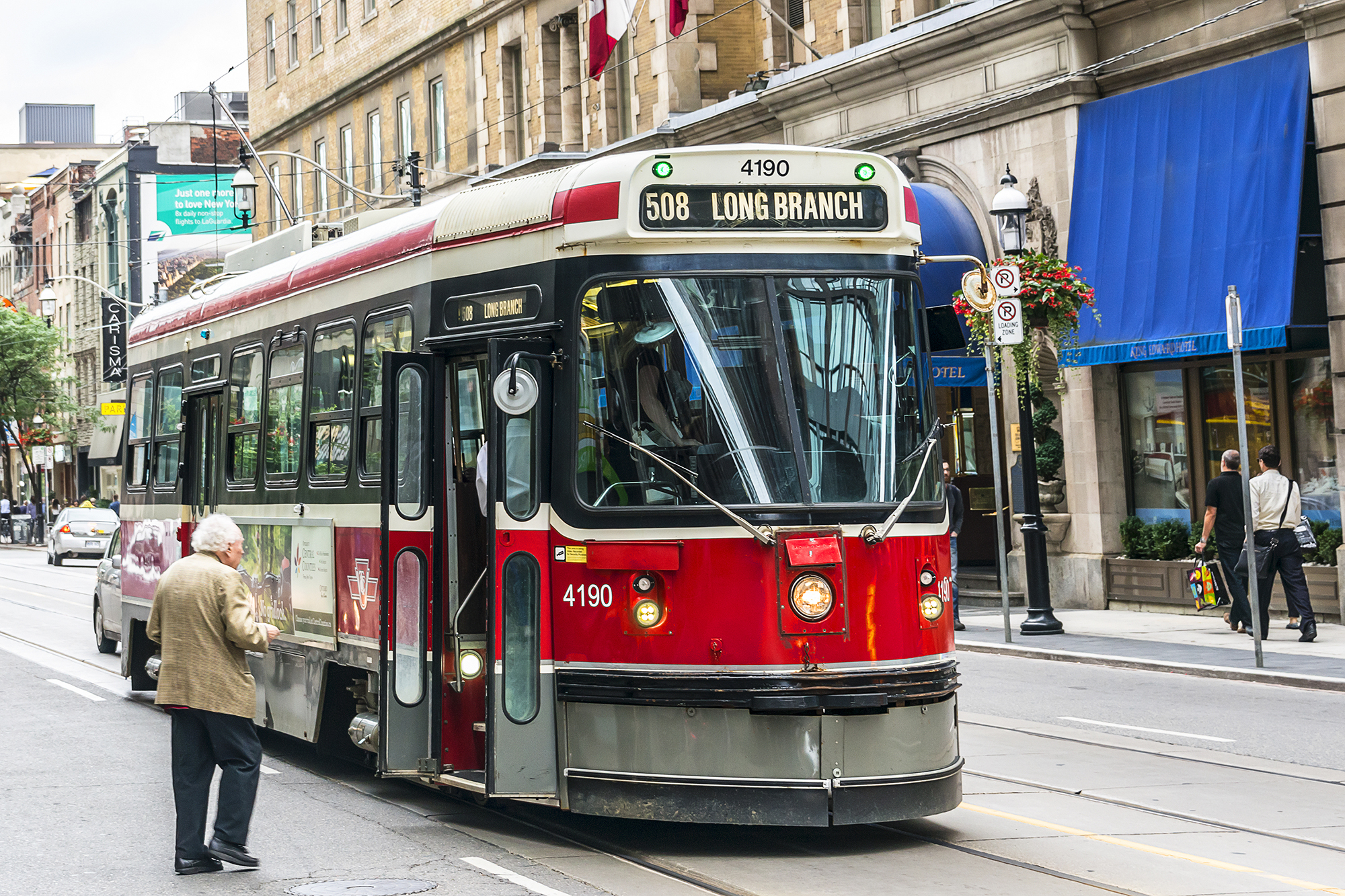 Check-in into: The Drake Hotel. When this hotel-bar-restaurant-music venue opened in 2004, it was on the edge of a no-go area along Queen Street West (QSW). Today, it’s in the heart of one of the buzziest neighbourhoods in the city. It’s the perfect base from which to explore the best of Toronto.

Shop at: Kensington Market. Stroll along Queen Street West, through Trinity-Bellwoods Park to Kensington Market. This bohemian neighbourhood is full of independent shops, bakeries and coffee spots. Grab a latte from Moonbean Coffee Company before hitting the boutiques.

Lunch at: Terroni. The Italian restaurant mini-chain is a Toronto success story, staying on top of their game since 1992. This QSW location is the original. It serves authentic pizzas, pasta and salads. Try the tonnarelli alla norcina: pasta with black truffle shavings, homemade spicy sausage, pecorino and garlic.

Pre-dinner drink at: Bellwoods Brewery. Sip a pale ale at this gorgeous brewpub on Ossington before dinner.

Dinner at: Boralia. This much talked about restaurant serves fine dining dishes made with the best Canadian ingredients. Expect culinary delights such as pan-roasted bison ribeye or pigeon pie. Don’t worry about a stuffy vibe, this beautiful restaurant has a super relaxed atmosphere.

Have brunch: at The Oxley. After a lazy morning, jump on the iconic Toronto streetcar downtown. The Oxley is a traditional British pub serving one of the best brunches in the city. Opt for a full English or bacon and egg butty with chips.

Explore: The Royal Ontario Museum. From The Oxley, you’re ideally placed to spend the morning exploring the best exhibitions in this vast museum. Be sure to visit the First Peoples collections and see the dinosaurs.

Go sightseeing at: the CN Tower. Head down to Union Station in the city centre (a hotdog ‘with everything on it’ from outside the station will cure any hunger pangs) and walk around to the CN Tower. The best way to see the city is from the top of Toronto’s most recognisable landmark. Thrill-seekers should do the EdgeWalk, a hands-free walk around a ledge at the very top of the tower.

Take a brewery tour at: Steam Whistle. You may need something strong after the EdgeWalk and fortunately, there’s a fantastic brewery just outside. Steam Whistle is set in the historic renovated Roundhouse Park, a former rail yard.

Take in a game at: Rogers Centre. In summer, catch a baseball game or in winter, head to the Scotiabank Arena for hockey.

Coffee at: Boxcar Social. This harbourfront coffee shop and bar is the kind of place that takes its coffee roasting seriously. Choose from their rotating menu of specialty blends or to learn more, sign up for a free tasting session held on Saturday mornings.

Spend the day relaxing on: Toronto Islands. Head to the Queen’s Quay Terminal to take the 15-minute ferry ride to Toronto Island Park, a group of 15 islands connected by pathways and bridges, in Lake Ontario. Here you’ll find an amusement park for the kids, bike and canoe rentals, and some of the city’s best swimming beaches.

Use this handy map of Toronto to help plan your trip.