Explore the Lake District: top things to do, where to stay and what to eat

Home to England’s highest mountain and largest lake and packed with cosy pubs, historic country homes and romantic landscapes, UNESCO World Heritage Site the Lake District should go straight to the top of your staycation list

Why go to the Lake District?

One of the UK’s most breathtaking destinations, the Lake District manages the rare feat of feeling quintessentially British, while looking spectacularly otherworldly at the same time with silky mirrored waters, fairy-tale forests, and soaring, cloud-capped peaks.

Nestled in valleys betwixt Cumbria’s rugged, ripe-for-hiking fells, 16 sparkling bodies of water offer endless opportunities for adventures afloat, while cosy tearooms and inns sidle up to Michelin-starred eateries in some of the prettiest villages in England – all just two hours and thirty-five minutes by train from London with Avanti West Coast.

A UNESCO World Heritage Site and designated National Park, one trip won’t be enough to take everything in, but read on for some inspiration to spark what’s destined to become a life-long love affair with the Lakes. 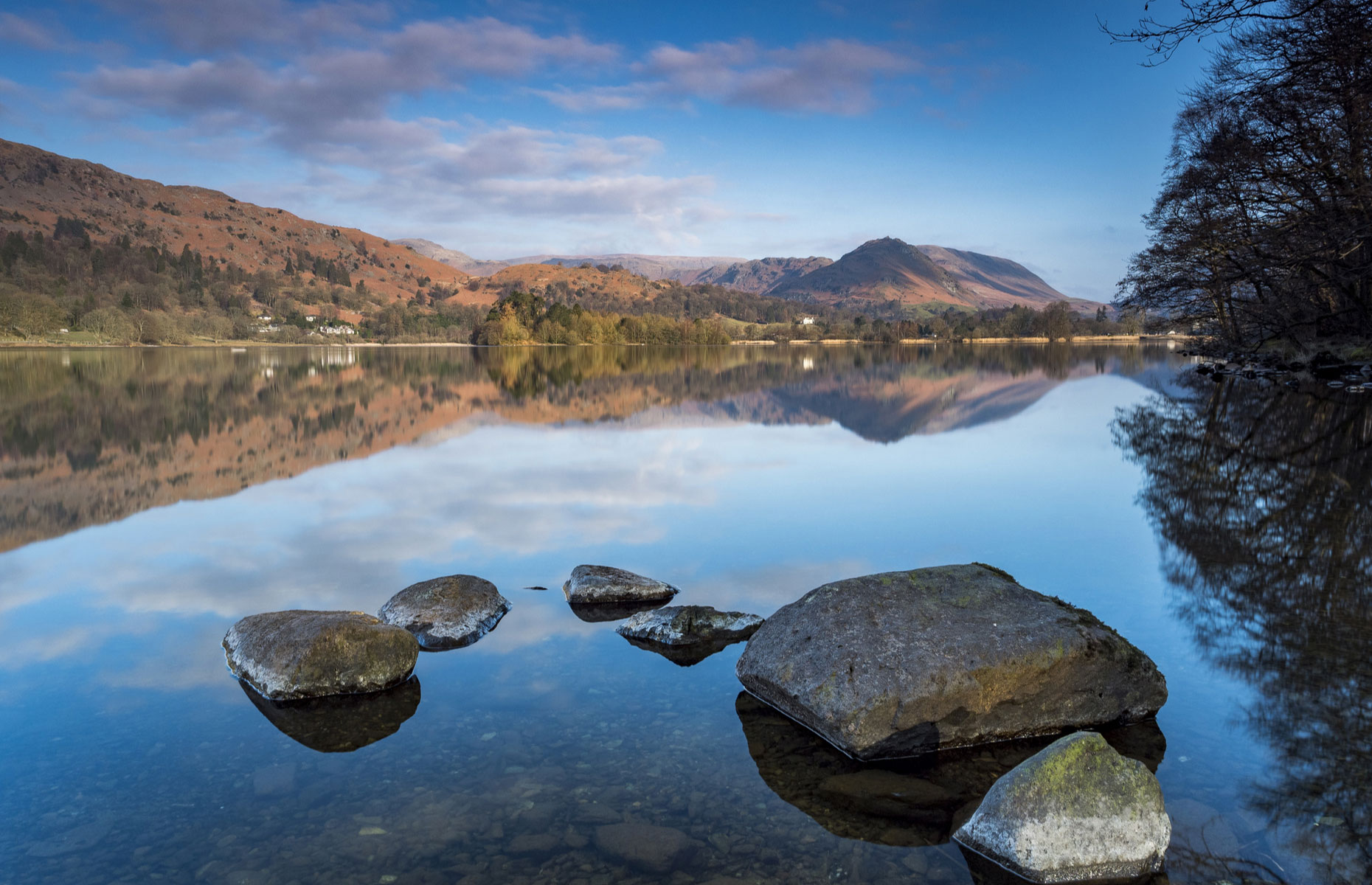 From quirky Hobbit Holes to family-friendly campsites and luxury spa hotels, you’ll find an escape to suit every taste and budget in the villages and on the shores overlooking the Lake District’s meres, but make sure you book early to secure your spot.

On the fringe of arty Grasmere village in the heart of the Lakes, the Victorian House Hotel beautifully captures the romantic spirit of the region where poet William Wordsworth lived and wrote some of his best-known works. With the air of a large private home (if only), the hotel has family and dog-friendly rooms and suites, and a comfortable lounge to curl up with your poetry book on a velvet period piece.

A telescope and panoramic windows greet guests in the Stargazer penthouse, so prepare to scan the skies after the sun sinks behind the fells, and Orion raises his huntsman’s bow to the heavens: Cumbria’s dark skies are legendary. It's all about feasting on wood-fired pizzas at night while hearty morning breakfasts are served in the airy conservatory and garden. Go for a wander and you’ll find a pretty stream and the hotel’s adorable shepherd’s hut and fire pit: the ultimate Lake District retreat.

One of Cumbria’s main attractions and England’s largest lake, Windermere is a vibrant hub with a multitude of restaurants, shops and hotels. Swerve the holidaying hoi polloi by escaping to the sanctuary of Storrs Hall, a Grade II-listed Georgian mansion house set in 17 acres on a serene stretch of water, complete with a 200-year-old stone boathouse. If you happen to have a boat yourself (and no, an inflatable SUP board doesn’t count), you can moor up at the hotel’s private jetty, or charter Storrs’ vintage Thames slipper launch for a private cruise before returning to one of the 30 main house guest rooms, or one of the six stunning lakeside suites. 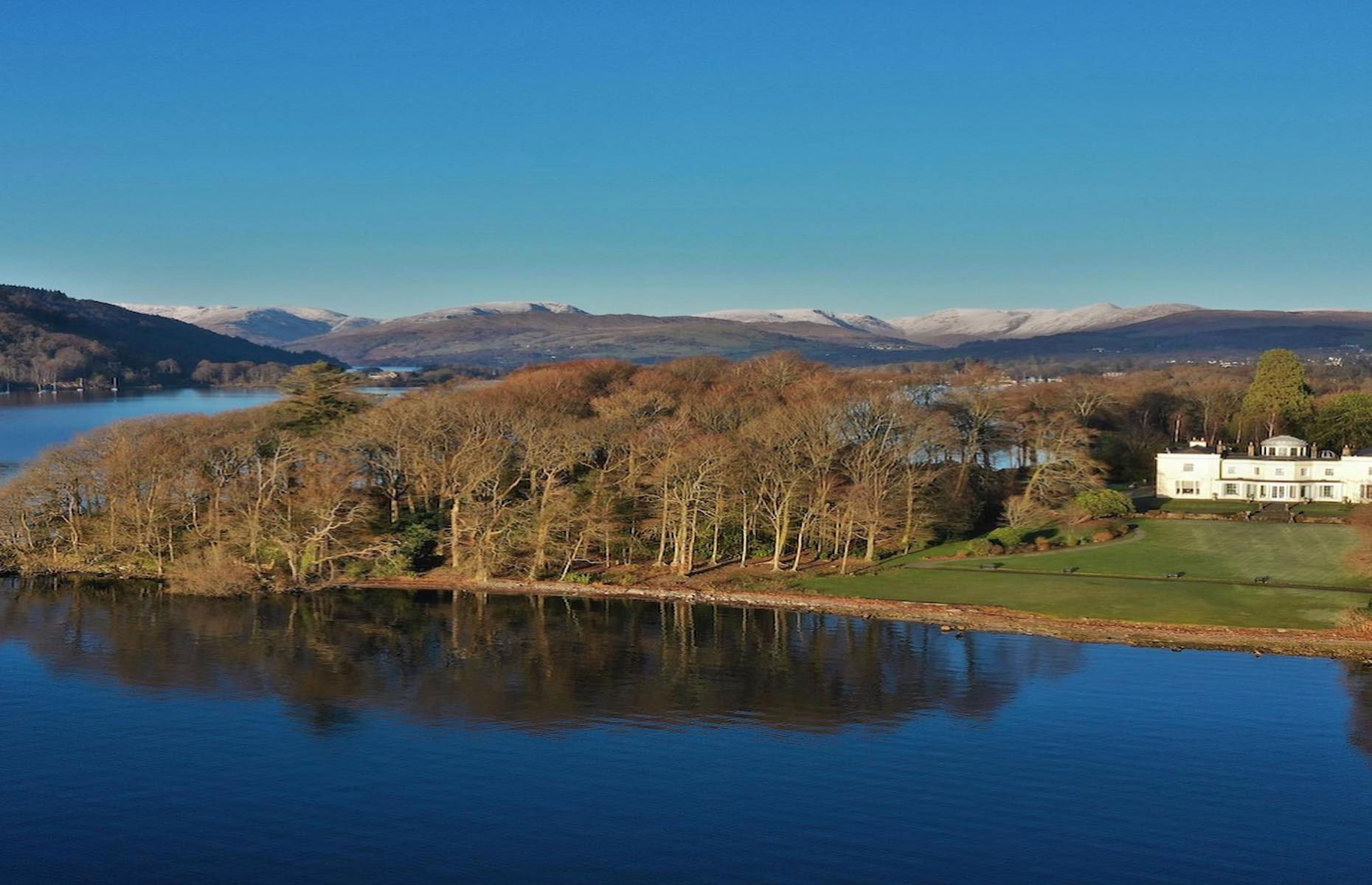 Now these, we can get on board with: adult-only contemporary cabins decorated in calming woodland hues, with super-king-sized beds, floor-to-ceiling windows, private terraces and Japanese cedar-wood hot tubs overlooking the forest or lake. Wow. Two are wheelchair-friendly, and all of them are so damn gorgeous you’ll have to tear yourself away for dinner in the elegant Lake Edge Restaurant. You’ll probably decide to have breakfast on your terrace the next morning: it'll be delivered in a highly covetable wicker hamper.

If self-catering is more your style, book a stay in one of the converted farmhouses, lodges or cottages at Whitbarrow, which sleep between two and eight people. Set in beautiful countryside between the historic market towns of Penrith and Keswick, the luxe holiday village is perfect for exploring the National Park’s second-largest lake, Ullswater, and hiking around Helvellyn, one of the region’s most popular mountains. Whitbarrow has plenty of on-site activities too, including a heated indoor pool, putting green, games room, gym and sauna, so it works for families, as well as couples or groups of friends.

After an energetic day walking the fells, your private hot tub will be waiting to soothe any aching muscles. You won’t even need to dress for dinner: just throw on something comfy and order in from the Eden Cafe Bar, or cook up your own feast in the well-equipped kitchens, before slipping into one of the comfiest beds you’ll find in the Lake District. 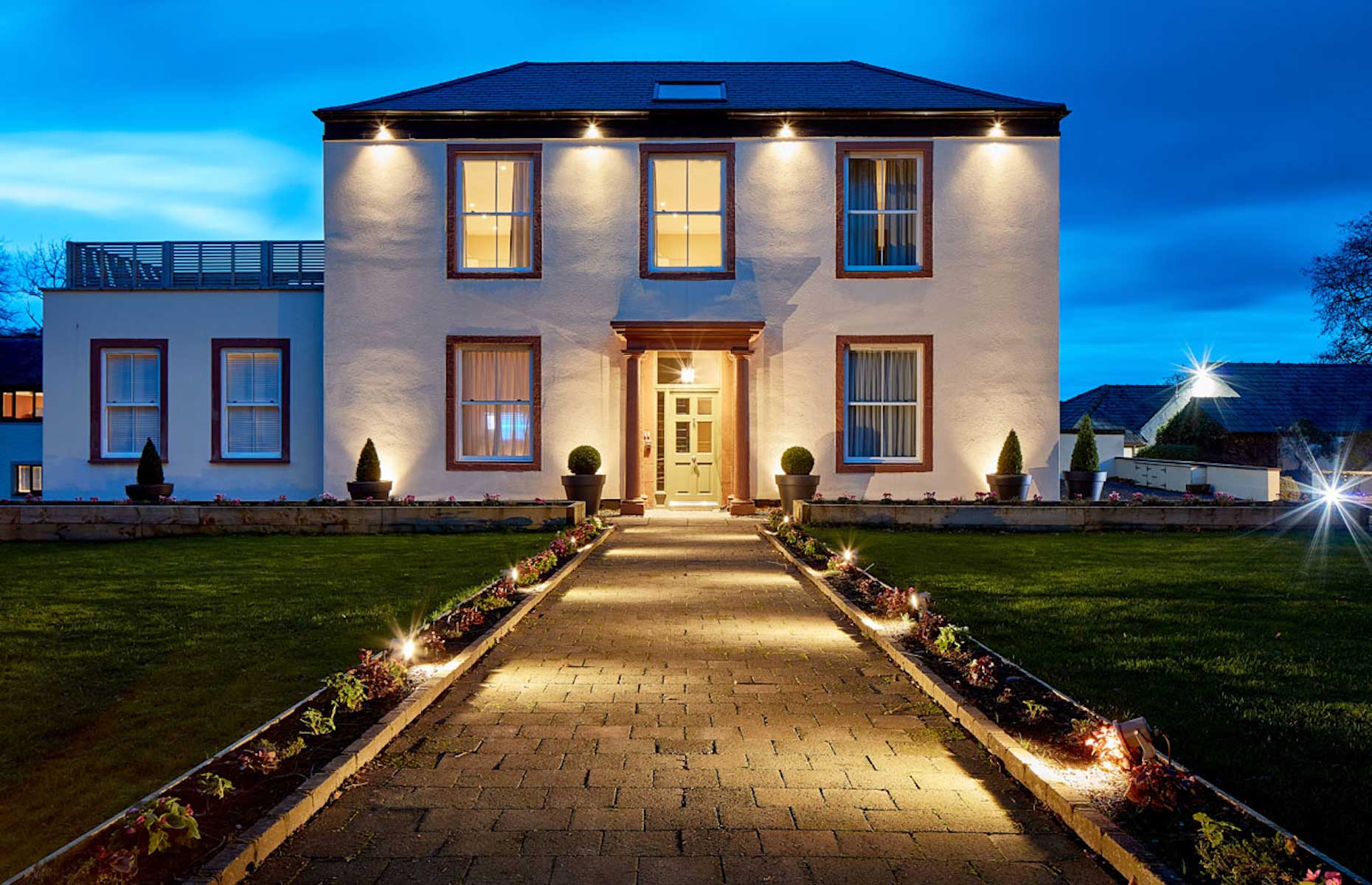 Cumbria’s long farming history has been shaping the landscape for centuries, and today around three million hardy sheep, along with cattle and ponies, still graze the county’s fells and moorlands. In the Lake District, tearooms serve up fabulous sweet treats and queues swirl around Sarah Nelson’s world-famous and fragrant Grasmere Gingerbread shop, while inns and gastro pubs offering quality British fare abound. The region’s restaurants also boast a constellation of Michelin stars and AA Rosettes. TripAdvisor’s Best Fine Dining Restaurant in the World, the Old Stamp House at Ambleside, flashes with seasonal flair, harnessing flavours that highlight the region’s historic connection to the spice trade. It also has a Michelin star.

Being made to feel special is all part of the luxury experience, but so too is feeling welcome. Windermere’s 5-star Gilpin Hotel & Lake House is at once luxurious and laid-back thanks to its affable staff who make even the most windswept fell walkers feel at home. The family-run Lake District gem has 25 bedrooms, including five spa lodges with hot tubs, three spa suites with full-service spa rooms and floating beds overlooking the mountains, and a six-bedroom Lake House estate, secluded in 100 acres with its own spa, hot tubs and pool.

The hotel also has not one but two top-notch restaurants, headed up by celebrated chef Hrishikesh Desai. Laid-back Gilpin Spice serves pan-Asian cuisine while Michelin-starred, four AA Rosette fine-dining sanctum HRiSHi wows with its modern British cooking with an inventive twist. Don’t miss its delightful afternoon teas, where you can tuck into three cake-stand tiers of deliciousness, preferably accompanied by champagne as you bask in the sun on the terrace. 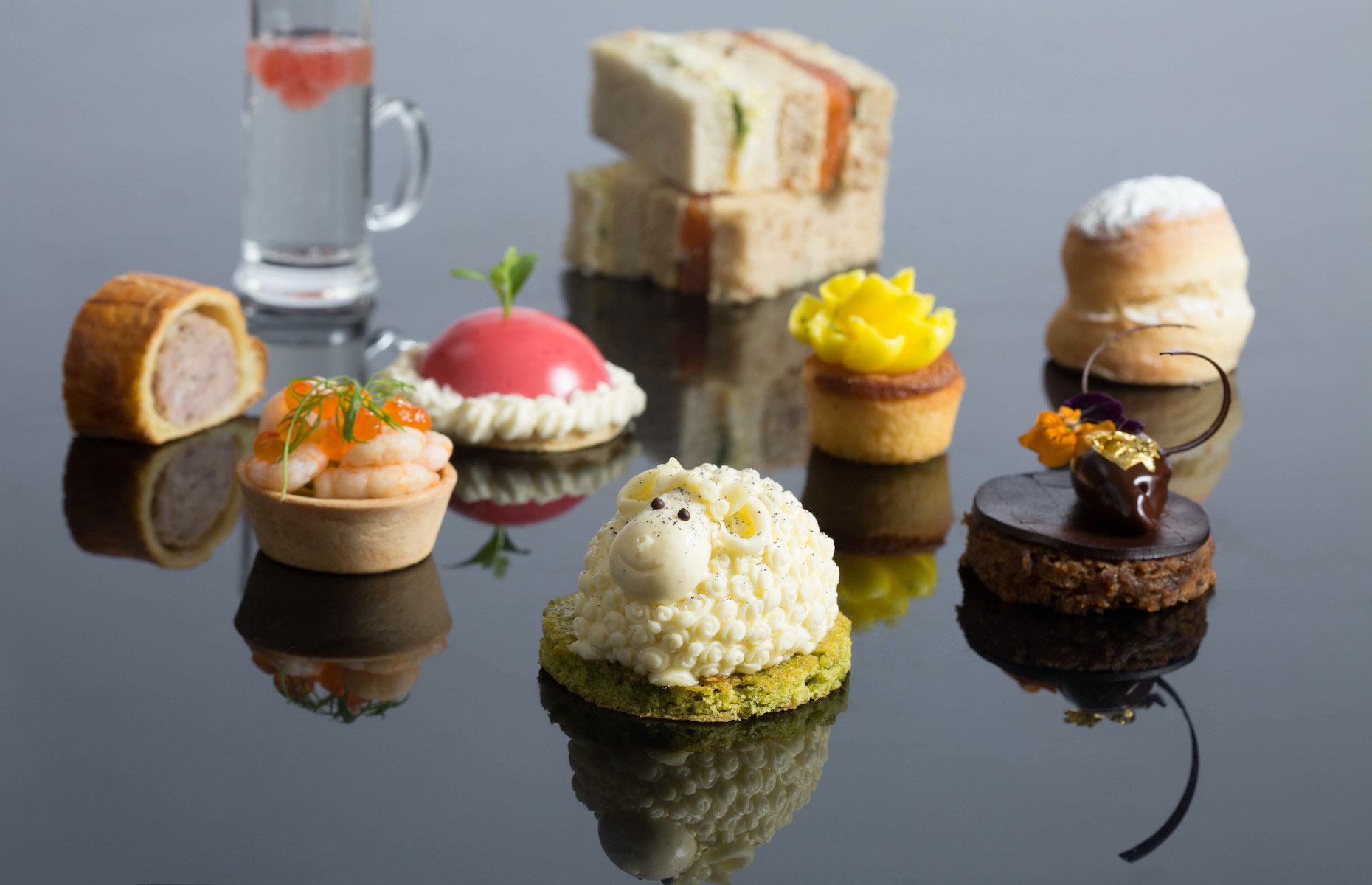 The Yan at Broadrayne, Grasmere

A short stroll from the village of Grasmere, The Yan is a beautifully unique destination for a romantic dinner à deux, or a full-on family feast. Set within Broadrayne Farm, surrounded by soaring fells, the rustic stone building dates back to the early 1800s, when the top floor was used for storing crops, with a stable and shippon below for cattle.

Family-run, it now has seven luxe en-suite bedrooms, and a downstairs bistro where head chef, Will Manley, creates British classics using the freshest local produce, alongside contemporary dishes with an Asian twist. There are imaginative vegetarian plates too like roasted pepper and sundried tomato onion bhajis on a curried hummus, green bean, pickled carrot and rocket salad. Save room for the amazing desserts: it might be a rich dark chocolate mousse or perhaps their take on the region’s much-loved sticky toffee pudding (which allegedly made its debut in Cumbria’s Cartmel Village Shop over 30 years ago). Add a sublime board of local cheeses, some full-bodied red wine, and could there be a more perfect place to spend an evening in the Lakes?

Whether you’re looking to enjoy wild swimming or water sports on the lakes, indulge in some extreme mountain adventures, or simply potter around the picturesque villages and valleys that inspired children’s author and sheep farmer, Beatrix Potter – who bequeathed 14 farms, her Herdwick sheep and 4,000 acres of land to the National Trust when she died in 1943 – the Lake District will happily oblige.

A post shared by NT Lake District (@ntlakedistrict)Wordsworth Grasmere, Grasmere
After a £6.5 million refurbishment, the wonderful Wordsworth Grasmere has opened its doors on its immersive experience, welcoming guests into the home of Britain’s most famous poet, William Wordsworth, and exhibiting his writing in the accompanying interactive museum. Moving to Dove Cottage in 1799 with his sister Dorothy, Grasmere – “The loveliest spot that man hath ever found” – is where William wrote many of his most famous works. Today, original furniture mixed with replica period pieces, letters and journals, magic visitors back 200 years: sit on the cottage’s kitchen window seat, close your eyes, and you’ll almost be able to smell the daffodils.

After a £6.5 million refurbishment, the wonderful Wordsworth Grasmere has opened its doors on its immersive experience, welcoming guests into the home of Britain’s most famous poet, Wordsworth, and exhibiting his writing in the accompanying interactive museum. Moving to Dove Cottage in 1799 with his sister Dorothy, Grasmere – “the loveliest spot that man hath ever found” – is where he wrote many of his most famous works. Today, original furniture mixed with replica period pieces, letters and journals, magic visitors back 200 years: sit on the cottage’s kitchen window seat, close your eyes, and you’ll almost be able to smell the daffodils.

If you’re visiting one of England’s natural wonders, you may as well hike to its highest spot, right? At 3,208 feet (978m) above sea level, the Lake District’s Scafell Pike is one of the mountain trio that make up the National Three Peaks Challenge, along with Ben Nevis in Scotland and Snowdon in Wales.

While thousands make it to the war memorial at Scafell’s rocky summit each year – including children and hikers of the furry, four-legged kind – it’s not to be taken lightly. Be prepared with a map, waterproofs, plenty of water and hiking boots, and make sure someone knows where you’re going before you set off. Allow five or six hours to walk the most popular route, which starts from Lake Head car park at Wasdale, and offers uplifting views over Wastwater lake to keep you climbing.

If you’re lucky with the weather, the sight that greets you at the summit will reward you handsomely for every breathless minute. As Wordsworth noted, Scafell revealed “a spectacle of the grandeur of earth and heaven commingled”.

If you’re expecting the Lake District Visitor Centre to be a pit-stop to pop in, use the loo and pick up some maps, think again. Brockhole on Windermere combines an information hub with action-packed pursuits on the region’s most famous lake. You can go kayaking, paddle boarding and canoeing here, plus there is archery, laser clay shooting, mini-golf, go-karts, bicycle hire, treetop obstacle courses and zip lines across the car park. Those with a more relaxing day in mind can enjoy the historic Brockhole House and Gardens, home to The Gaddum Gallery, The Gaddum Restaurant and the Brockhole Kitchen Garden. 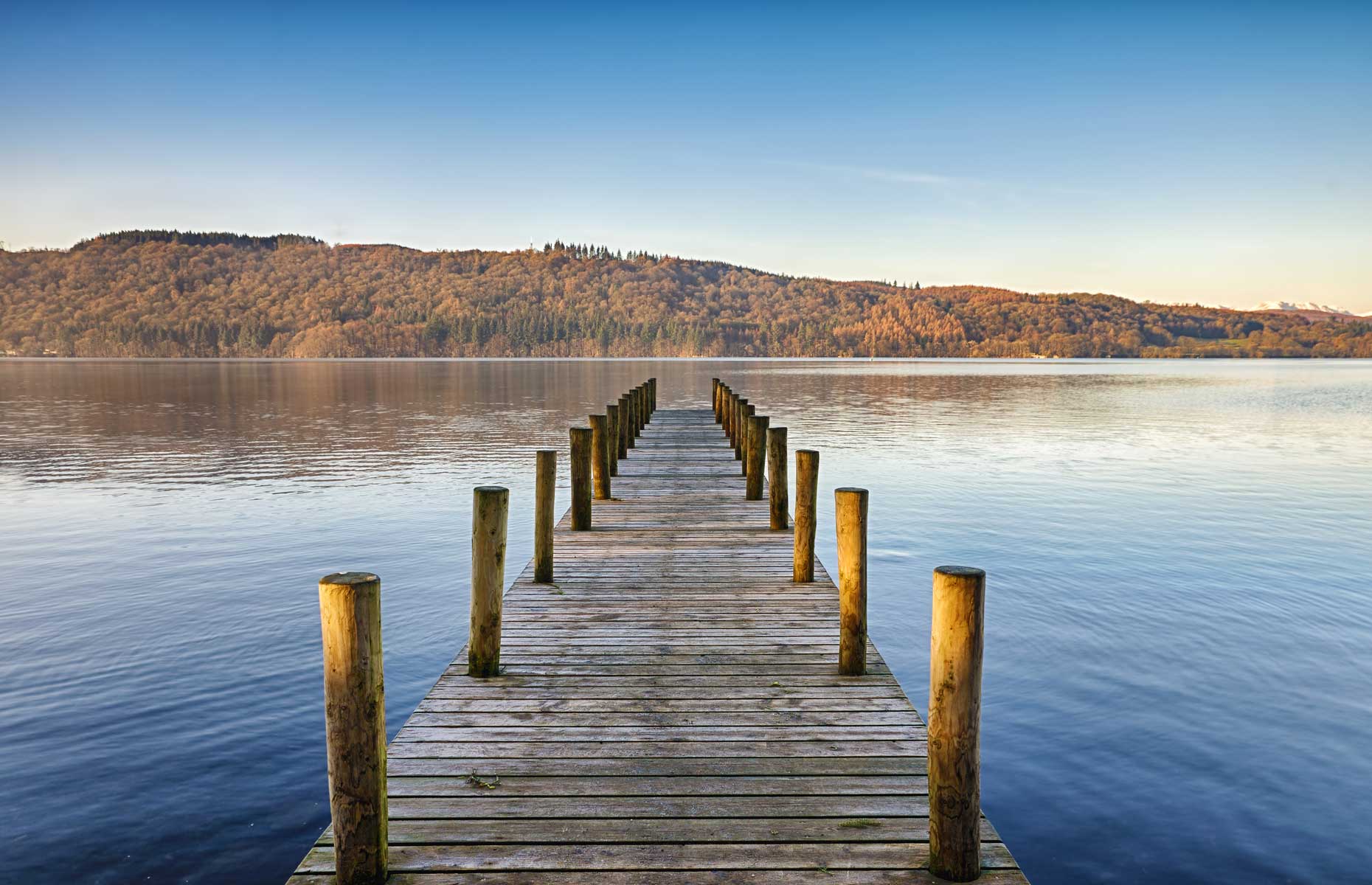 The Lake District is the perfect playground for hikers and bikers, but for something spectacularly different, sign up for a morning of ghyll scrambling, or gorge walking, with outdoor adventure company River Deep Mountain High.

Guide Tom Waplington meets groups (or individuals) at Tilberthwaite Ghyll in wildly beautiful Coniston where they're kitted out with wetsuits and boots, flotation vests, helmets and harnesses, before setting off for a three-hour scramble up the ghyll (the name for a ravine or narrow mountain stream around these parts). Wading through white water on the ascent, you’ll climb over boulders, jump and swim in sparkling pools, and rope-climb up waterfalls in fairy-tale realms unreachable by road, before hiking back down through the fabulous fells. The Lakes’ rugged landscapes are stunning when admired from afar, but climb, hike, swim and scramble among them and they’ll be under your skin forever.

To find out more about the Lake District, go to VisitLakeDistrict.com. Avanti West Coast has standard class single fare tickets from London Euston to Oxenholme from £26.20 or to Penrith from £29.80.