These are America's most unspoiled places

Quiet places around the US 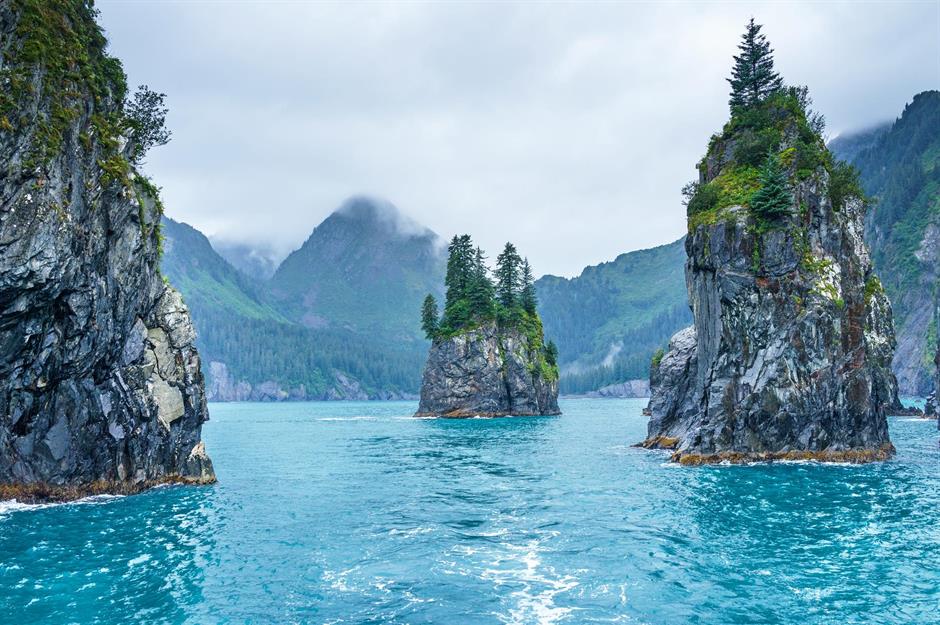 Sekar B/Shutterstock
The USA's remotest nooks and farthest flung crannies, from sprawling national parks to tiny islands home only to wild creatures, are beautiful. While you can't visit them in person right now, explore them through these stunning photos for some virtual peace and quiet. 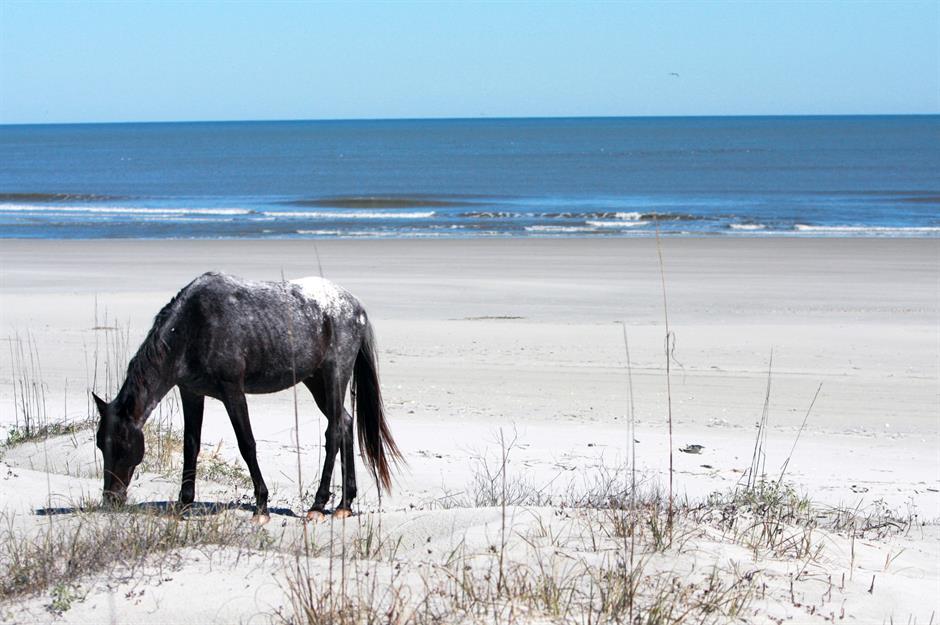 Josiah True/Shutterstock
Loggerhead turtles nest on this barrier island off the southeast coast of Georgia and wild horses graze on the dune grass, which sprouts in tufts on the pale, biscuity sand. This wilderness is vast. There’s nearly 10,000 acres of it, from salt-sprayed forests to wetlands and marshes. 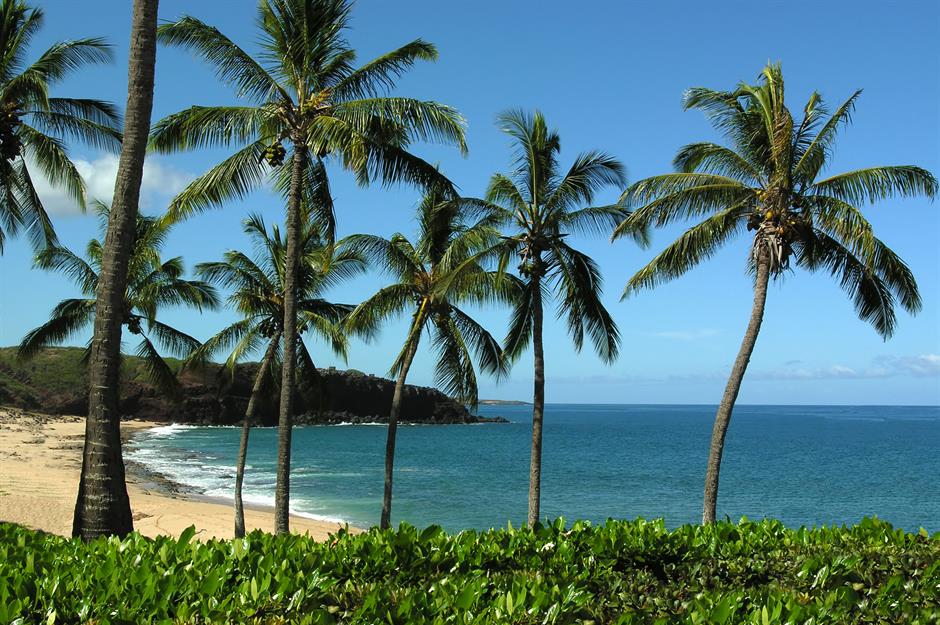 Mike Brake/Shutterstock
Palm-fringed beaches and teal waters are pretty much a given in Hawaii. But Moloka‘i, nicknamed 'The Friendly Isle', is more rural than other islands. It's only 38 miles (48km) long and 10 miles (16km) wide but has the highest sea cliffs in the world and the longest continuous fringing reef.

JB Manning/Shutterstock
The Chisos Mountains meander through this vast national park in southwest Texas. It also encompasses swathes of the Chihuahuan Desert, although you’re unlikely to meet any small dogs out here. The area is stuffed with limestone cliffs, waterfalls and mountain peaks, and the Rio Grande river slices through Santa Elena Canyon. 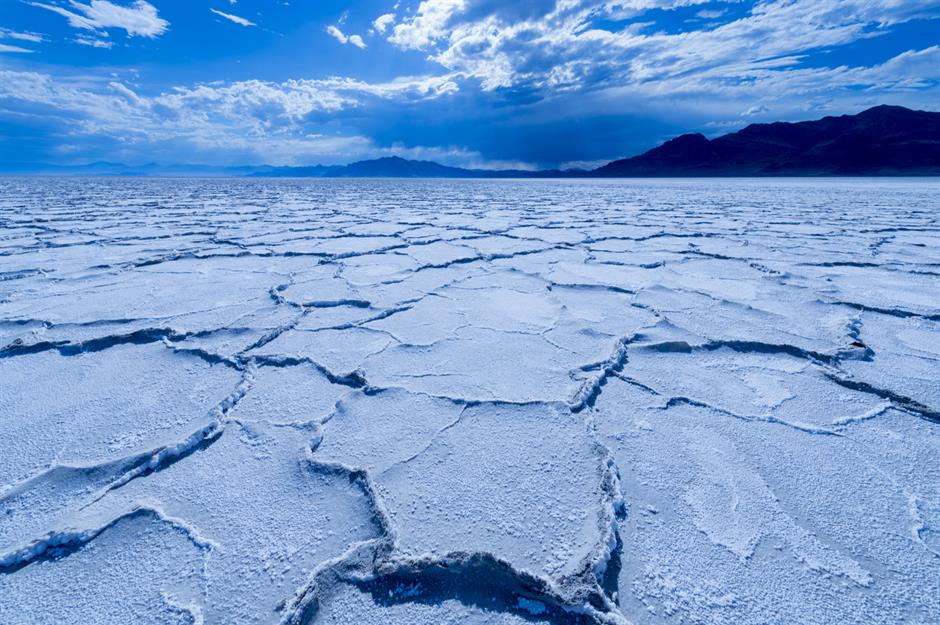 DonLand/Shutterstock
There’s hardly any sign of life at Bonneville Salt Flats, a blazingly white, lunar-esque landscape whose surface cracks and curls in the sunshine. These salt pans sprawl across more than 30,000 acres and, unsurprisingly, nothing grows or lives here. 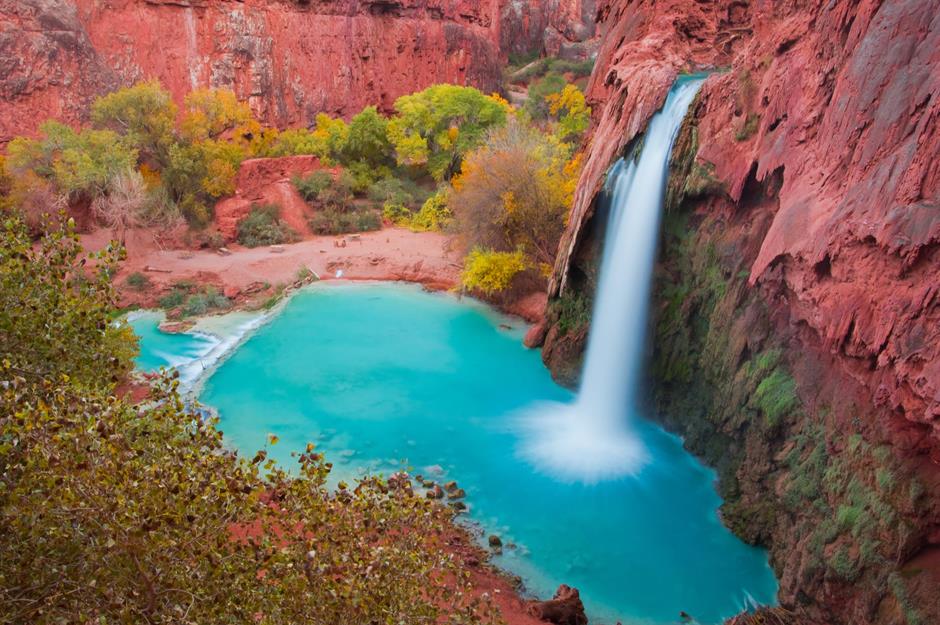 Nestled inside the Grand Canyon is the remote village of Supai, home to the Havasupi Tribe since 1300. The stars of this untouched spot are undoubtedly the shimmering waterfalls that tumble softly, like silk, into natural swimming holes. There are five in total: Navajo Falls, Fifty Foot Falls, Beaver Falls, Mooney Falls and Havasu Falls. Now take a look at the world's most beautiful waterfalls. 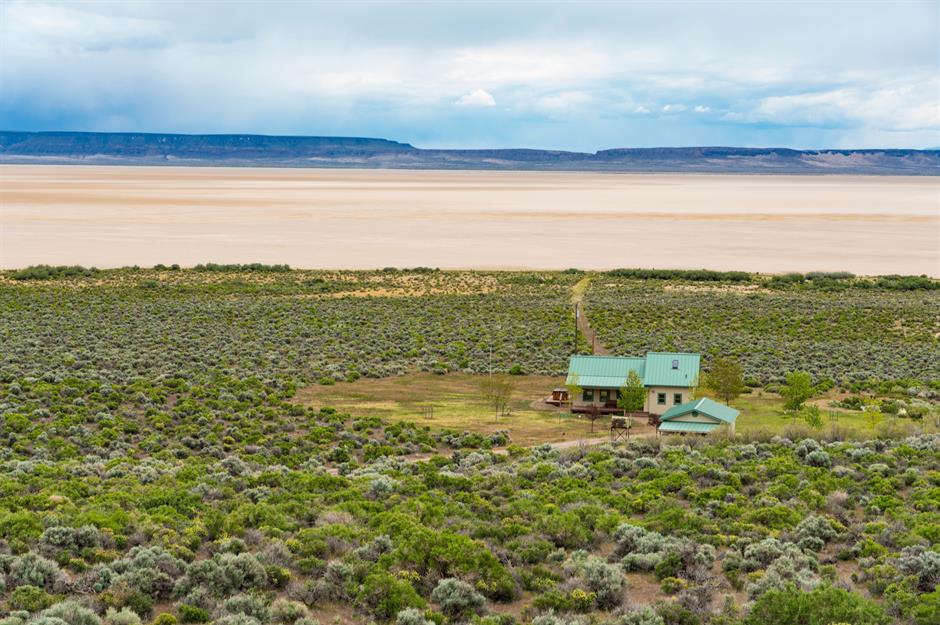 This unique 'desert' is actually a former lake, which evaporated over time to reveal a series of pale alkali beds. The area is dotted with hot springs like the geothermal waters at Alvord Hot Springs, complete with a mountainous backdrop. And Mickey Hot Springs with hissing mud pots and bubbling turquoise pools. Take a look at more hidden wonders in the world's deserts. 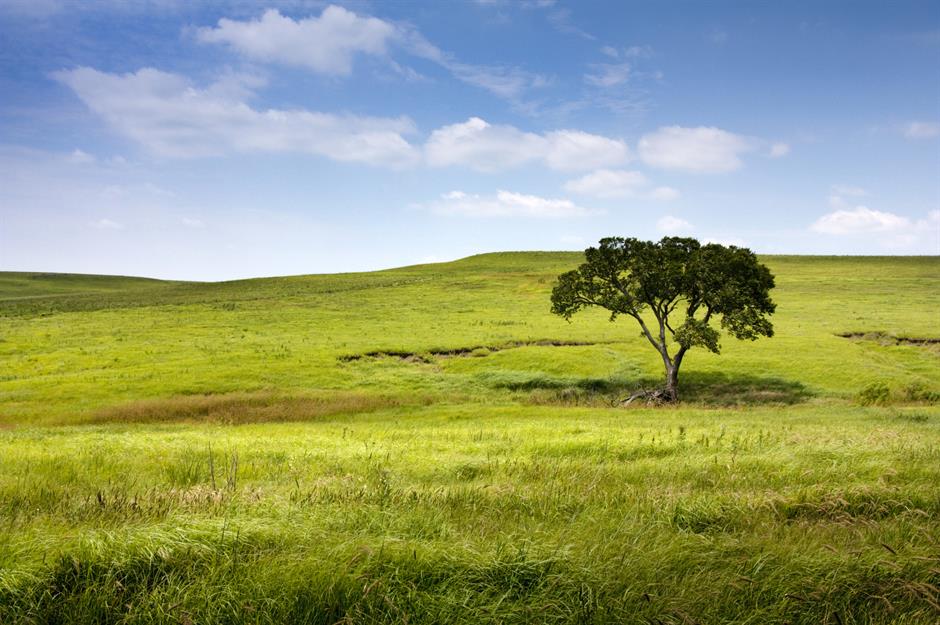 Ricardo Reitmeyer/Shutterstock
Prairie once carpeted vast swathes of the US. Today, few pockets of this ecosystem remain and most of them form part of Tallgrass Prairie National Preserve in the Flint Hills of Kansas. Trails wind through undulating fields of copper-hued grass, shimmering in the breeze, and past fields grazed by bison and white-tail deer. 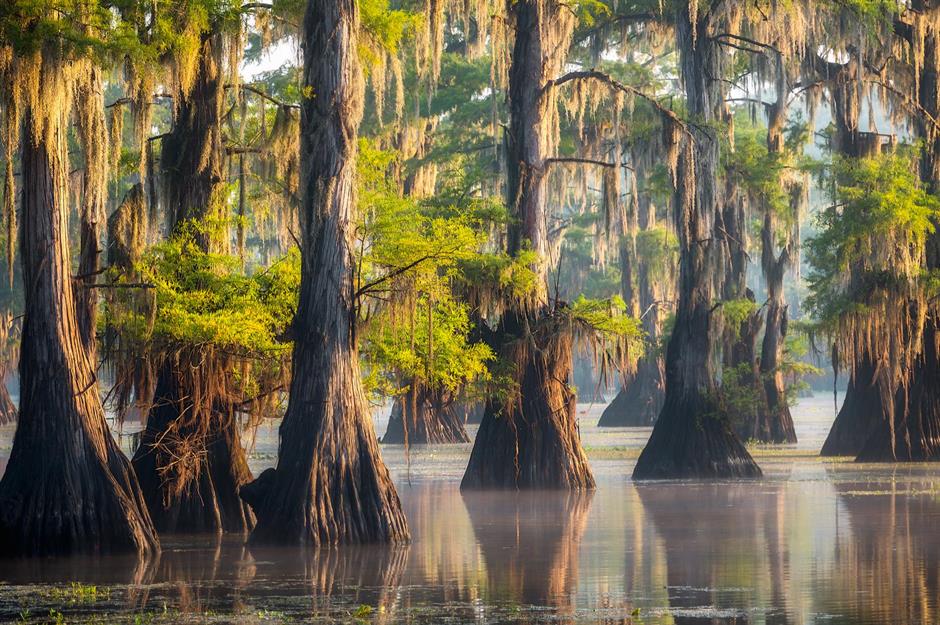 This tucked-away Texan spot hugs the state’s border with Louisiana. It’s an ethereal mix of swampy bayous, ponds and cypress trees, which drip with Spanish moss. Their broad, knotted trunks are submerged in the water. Discover more of America's most stunning lakes. 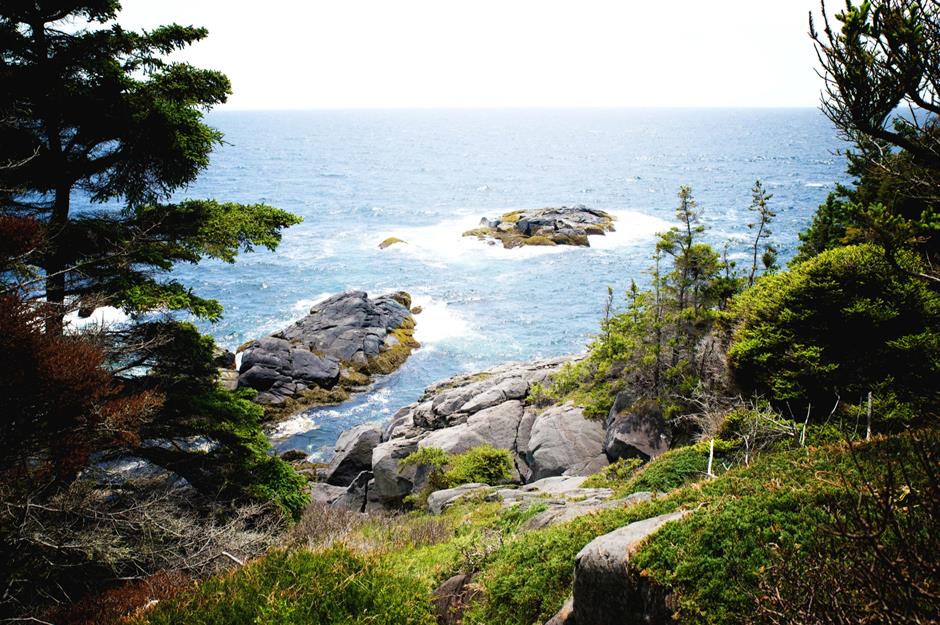 LeShayne/Shutterstock
Monhegan Island, off the mid-coast of Maine, is an inspiring landscape. Not surprising then that the majority of the 70-odd people who live on the mountainous enclave are artists. It's a place with moody woodland, ocean bluffs, craggy outcrops and salty sea air. 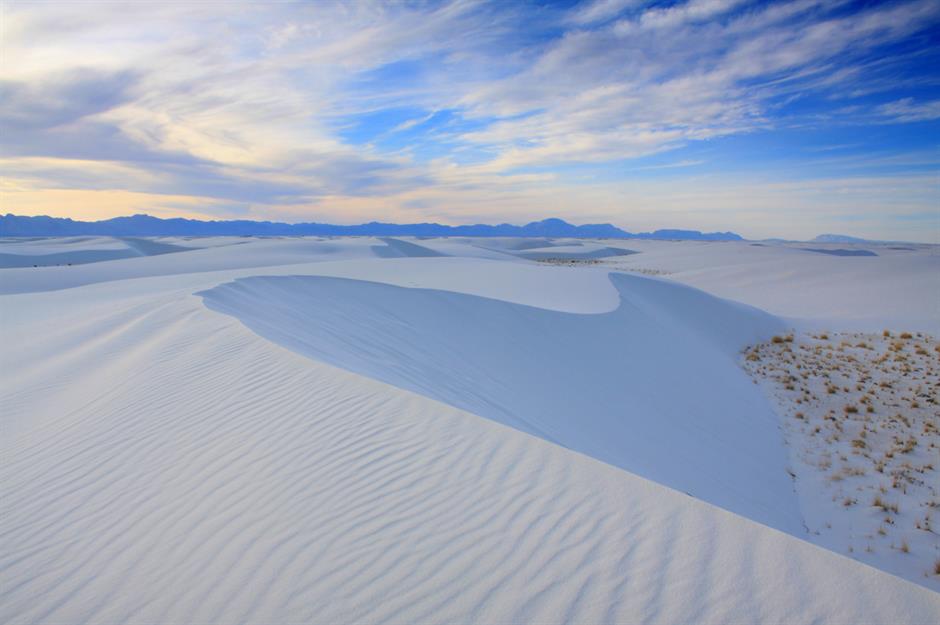 lphoto/Shutterstock
These shortbread-hued dunes seem to go on forever, curving, dipping and rising in soft peaks. In fact they go on for 275 square miles (712sqkm), brightening the landscape between the San Andres and Sacramento mountain ranges. The dunes are formed by gypsum sand – a rare mineral found only in a few places on Earth. It dissolves in water so it's almost a miracle such large quantities of it exist in one place but thanks to New Mexico's dry climate, the sand thrives here. 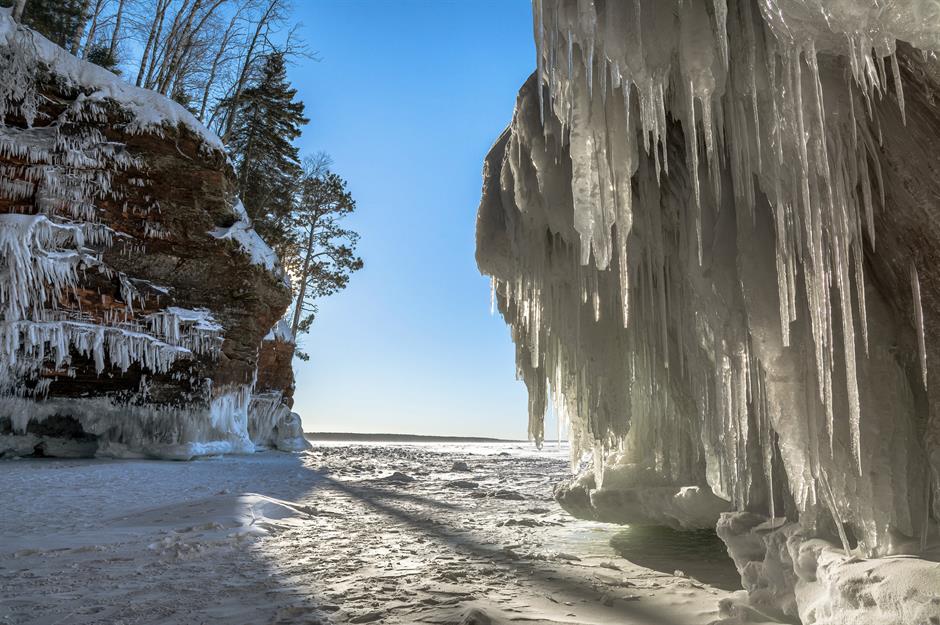 Apostle Islands National Lakeshore boasts all manner of natural wonders but none are more magical than the ice caves that form here in winter. Caverns drip with giant icicles and Lake Superior’s ice is thick enough to walk on. Find more places you won't believe are in the USA. 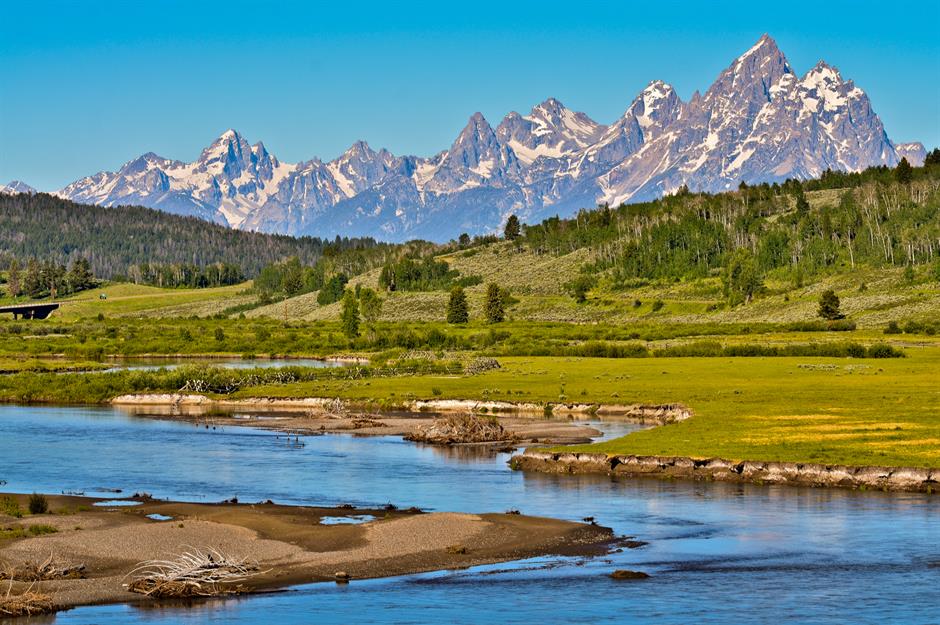 Chanya Thirawarapan/Shutterstock
The vast landscape of Grand Teton National Park is etched with snow-capped mountains, woodland and crystalline lakes. The highlight of the dramatic scenery is the Teton mountain range, of which the park's namesake Grand Teton is the highest. 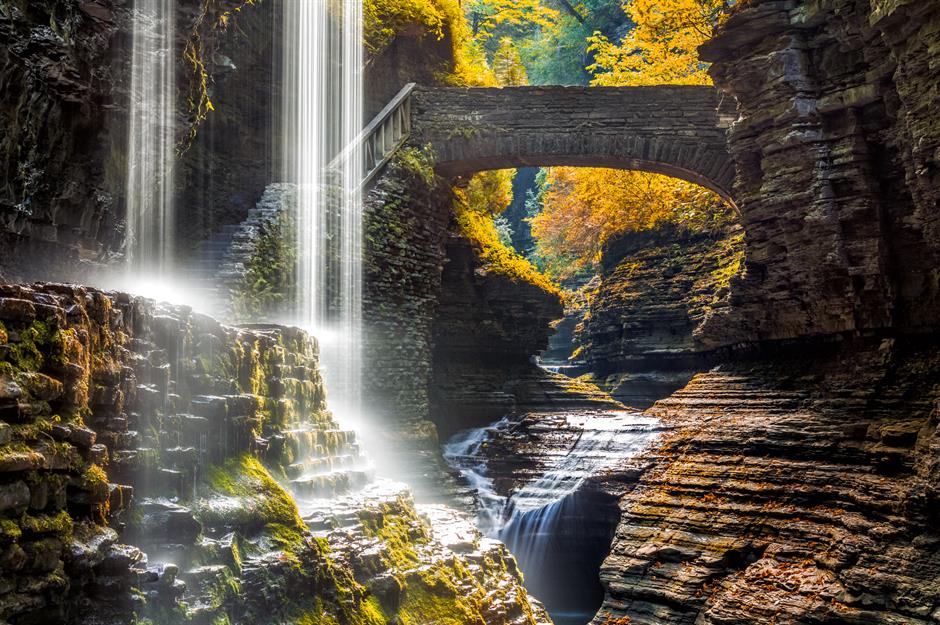 The Finger Lakes region is known for vineyards but there’s a lot more to it. It’s named for its 11 long, skinny lakes which glisten on the landscape. Beyond the water, there are waterfalls, gorges, thick woods and rolling hills. Take a look at these jaw-dropping places you can only see in photos. 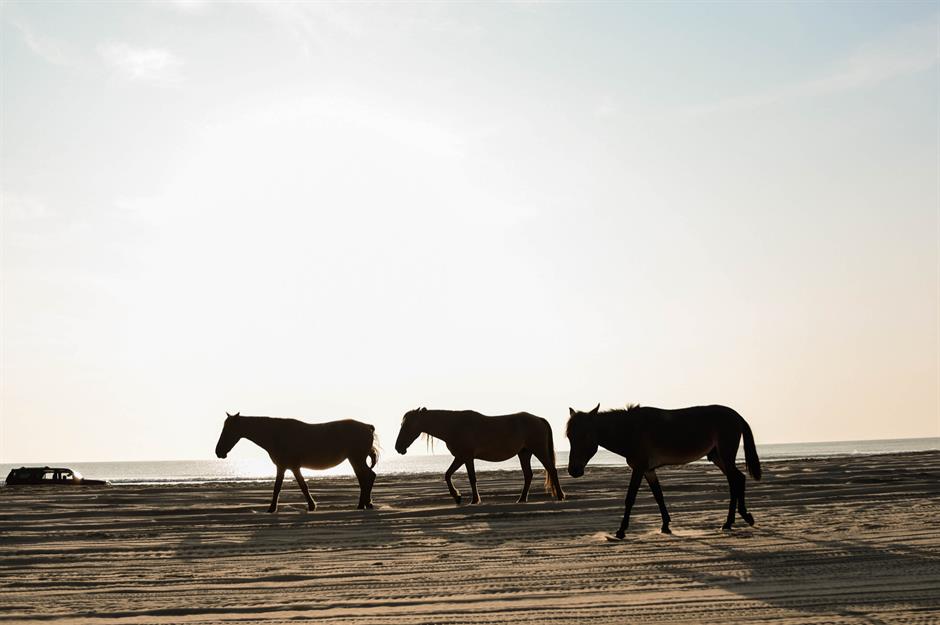 Andrew Cline/Shutterstock
Herds of wild horses roam the pale beaches and rolling dunes of Carova Beach, a tiny Outer Banks spot. The graceful animals are thought to be descended from Spanish mustangs shipwrecked here in the 1400s. The unspoiled nature of the place has allowed them to live freely here for centuries. 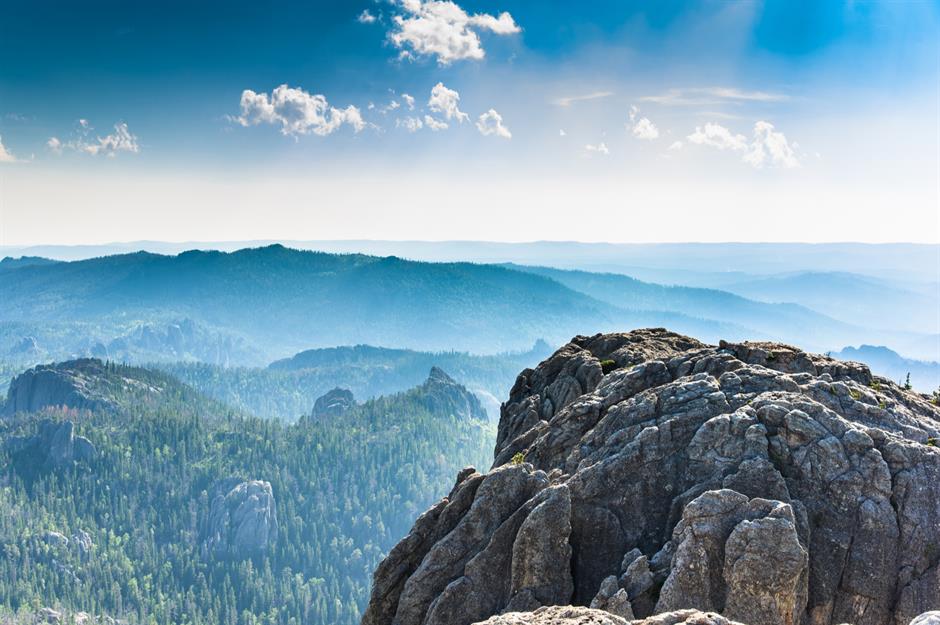 Benjamin F Sullivan/Shutterstock
With 5.4 million acres of pine forests, mountains, canyons, lakes and open grasslands, there's plenty of peace and quiet here. It's also where the Crazy Horse Memorial is located, a tribute to the late Sioux warrior. Crazy Horse, who was killed in 1877, is famed for his role in the Sioux Wars, as Native peoples resisted the invasion of the Great Plains. The mammoth mountain carving is thought to be the largest in the world – the face alone reaches 87 feet (27m). 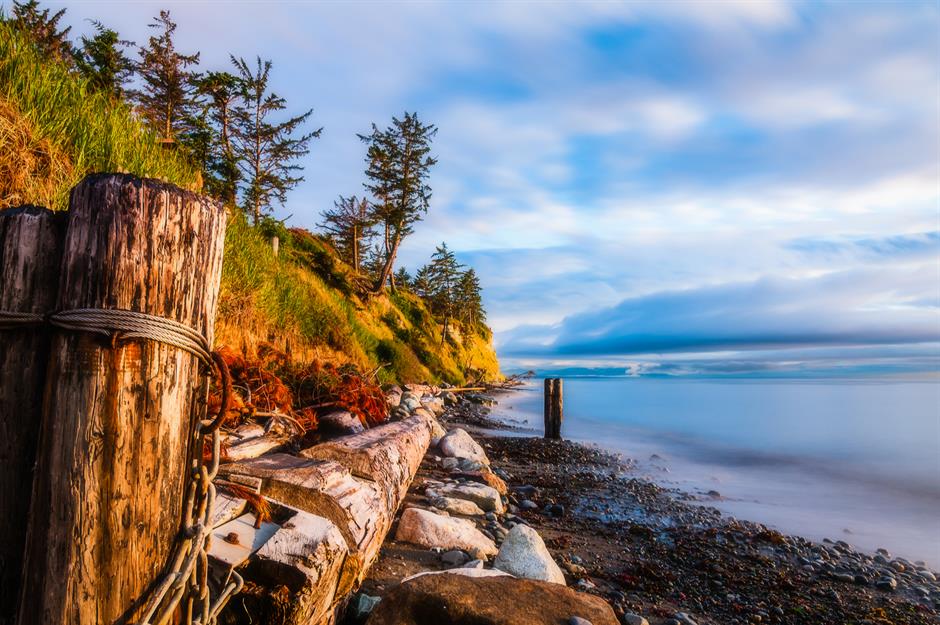 Whidbey Island belongs to nature. Alder and fir trees blanket the ground, clusters of oysters cling to the shoreline and orcas can sometimes be spotted off the coast. Deception Pass State Park, right at the tip, is the domain of centuries-old fir trees and picture-perfect sunsets. Take a look at these incredible photos of abandoned islands the world forgot. 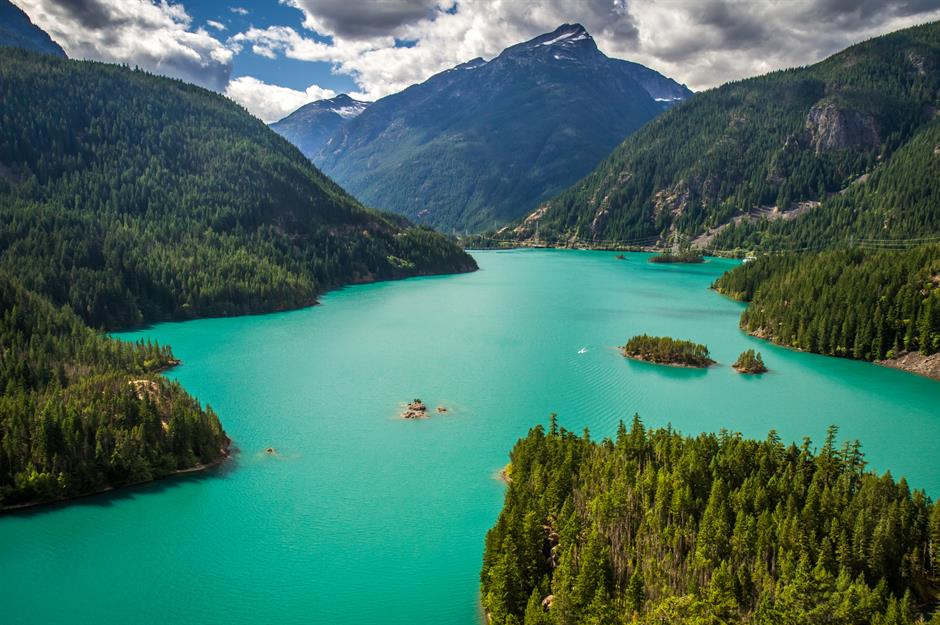 Pierre Leclerk/Shutterstock
The beauty of North Cascades National Park is undeniable. Glacier crowns top mountain peaks, forested trails lead to tall waterfalls and lakes are the colour of creamy turquoise. The park is home to grizzly bears, grey wolves and more than 200 species of bird. 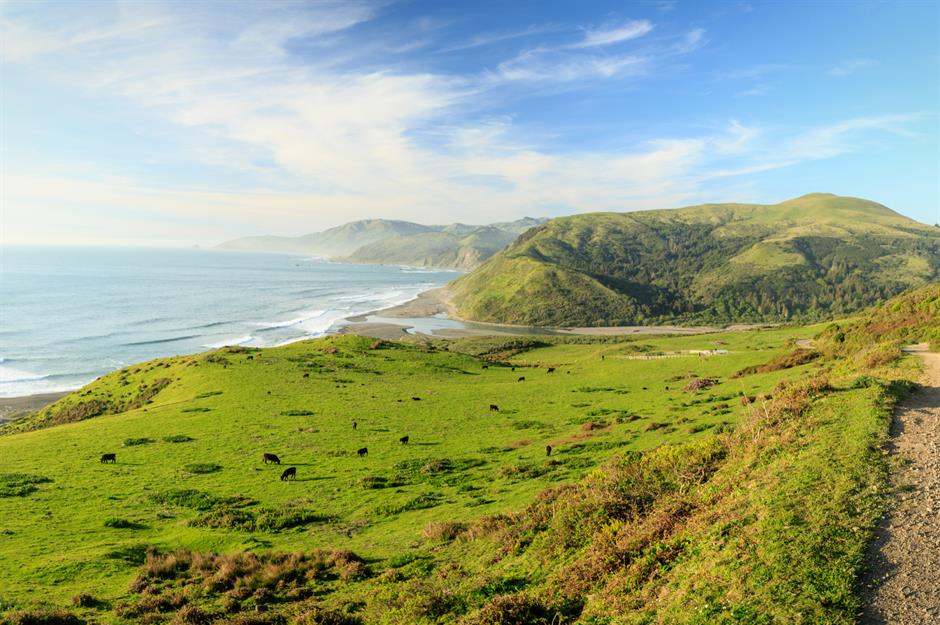 Pete Niesen/Shutterstock
California’s Highway 1, or Pacific Coast Highway, is one of the world’s most famous routes. It ends in Mendocino County, merging with the 101 freeway, but the coast itself carries on. This is the Lost Coast, a 25-mile section too wild for that wiggly highway to continue through it. It's a remote spot of foggy forests and driftwood beaches. 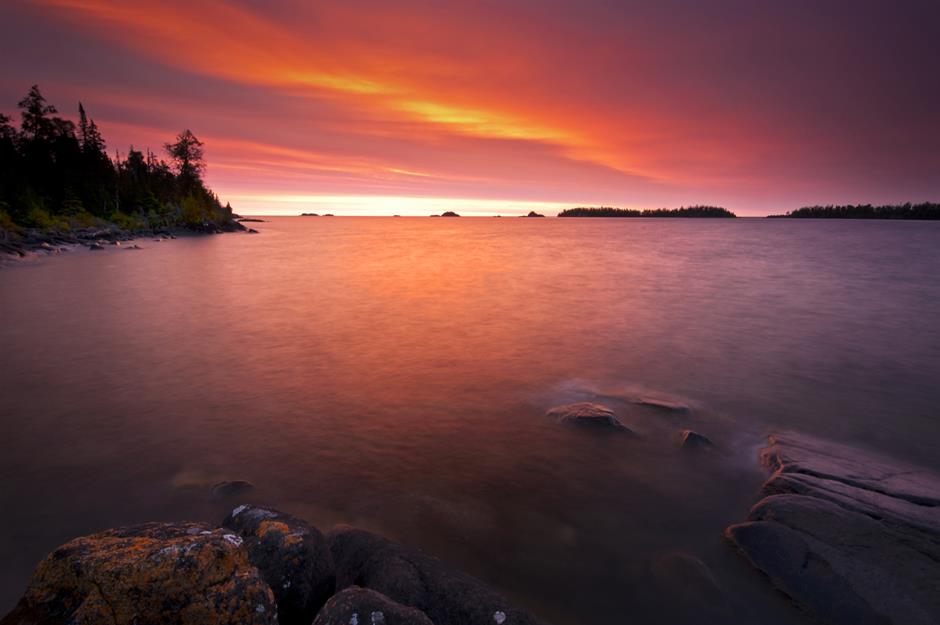 Mark Baldwin/Shutterstock
Part of the Great Lakes, Isle Royale National Park is an archipelago of more than 200 islands – some of which have their own mini lakes, waterfalls and even shipwrecks. The largest, Isle Royale, has wildlife including wolves and moose. 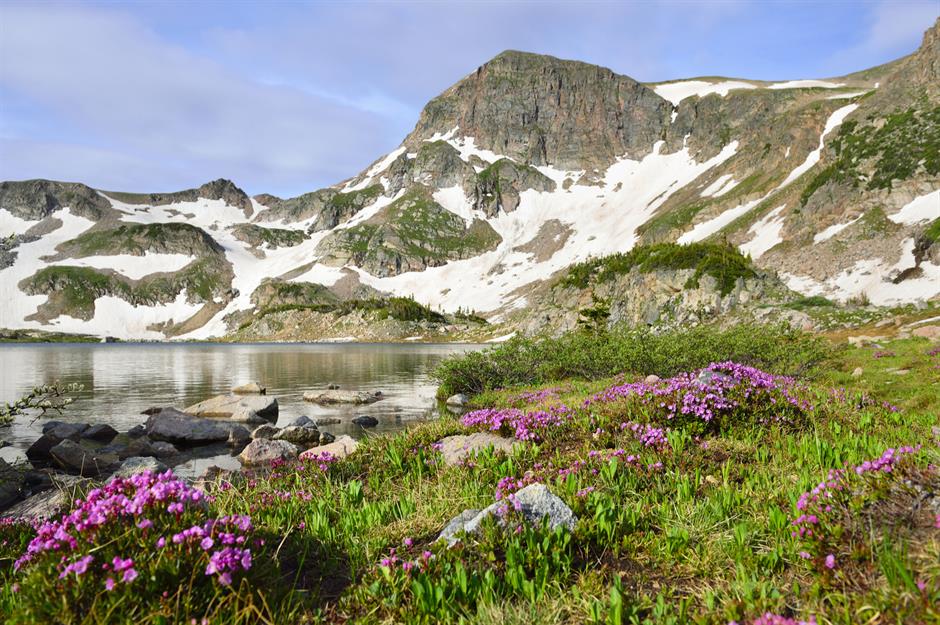 The clue’s in the name: this is more than 74,000 acres of wonderful, unspoiled wilderness. Think valleys carved by glaciers, mountain slopes studded with fir trees and clear, sapphire lakes. Now take a look at the last unspoiled places on Earth. 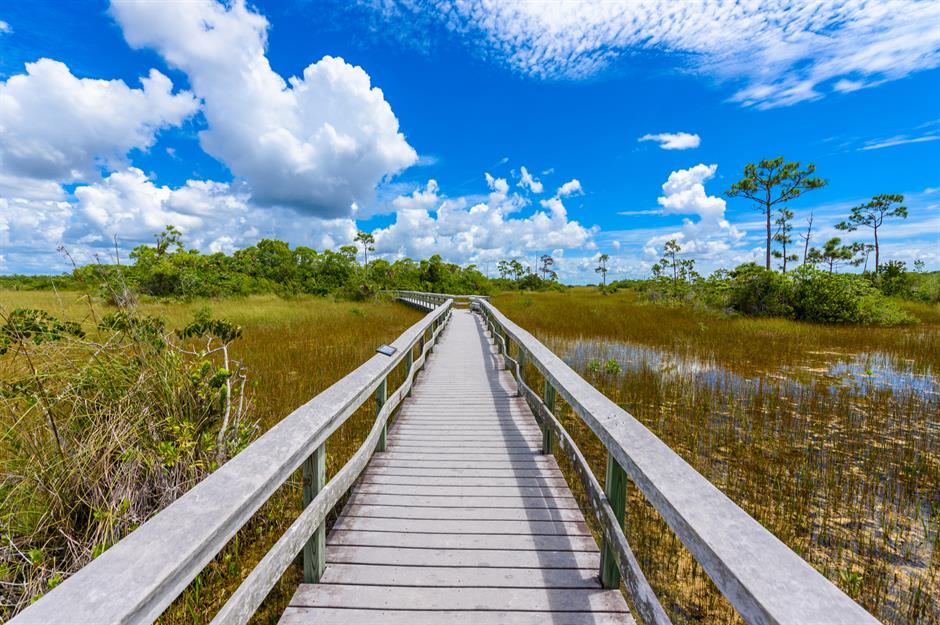 Simon Dannhauer/Shutterstock
Why did the crocodile cross the road? Because, in Everglades National Park, stuff like that just happens. Nature is big and abundant in Florida’s vast, subtropical wilderness. The park itself covers only a small section of the sprawling wetland that's home to mangroves, the endangered Florida panther and the American alligator. 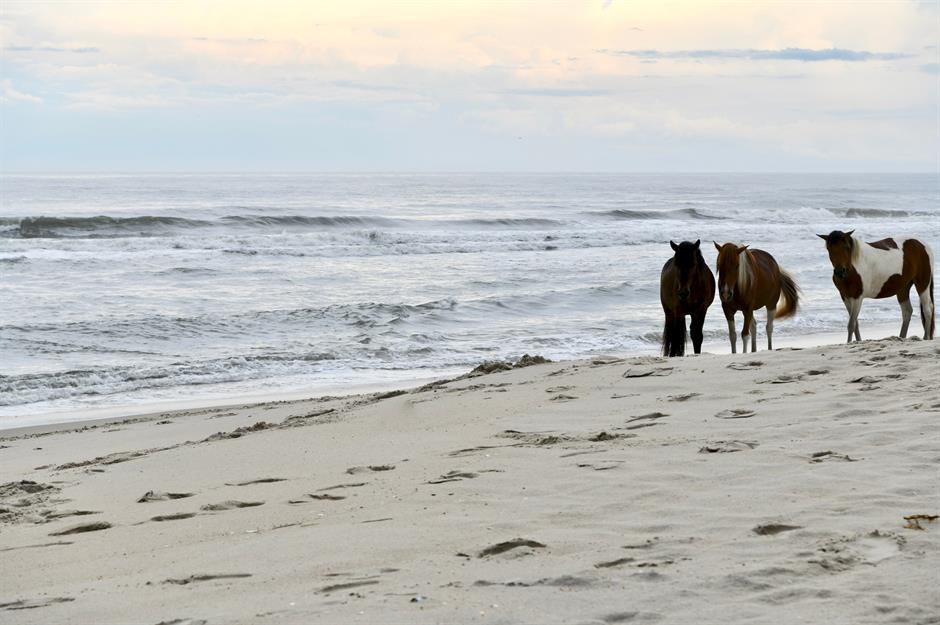 Jeramey Lende/Shutterstock
This barrier island is home to beaches as soft as caster sugar and best-known for its wild ponies. Two herds of feral horses (the wild descendants of domestic animals) thrive here, one managed by the National Park System and one by the Chincoteague Volunteer Fire Company. 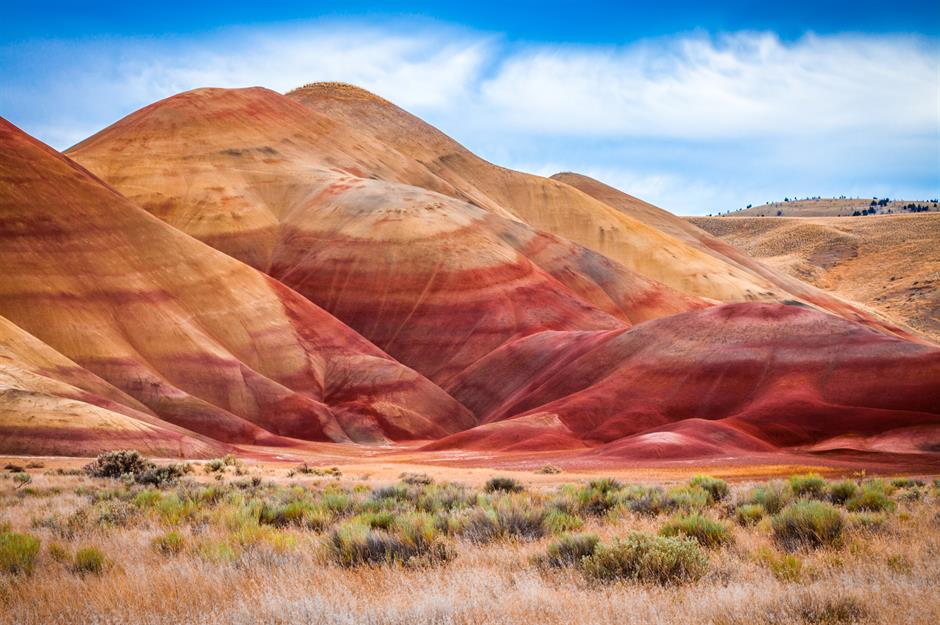 Tomas Nevesely/Shutterstock
The peach, apricot and golden stripes of Oregon’s Painted Hills are truly stunning. Early morning light washes them with pale pastels and in the afternoon, the dipping sun seems to illuminate the rocks from within. The bands of colour show how the climate and geology have changed over time. 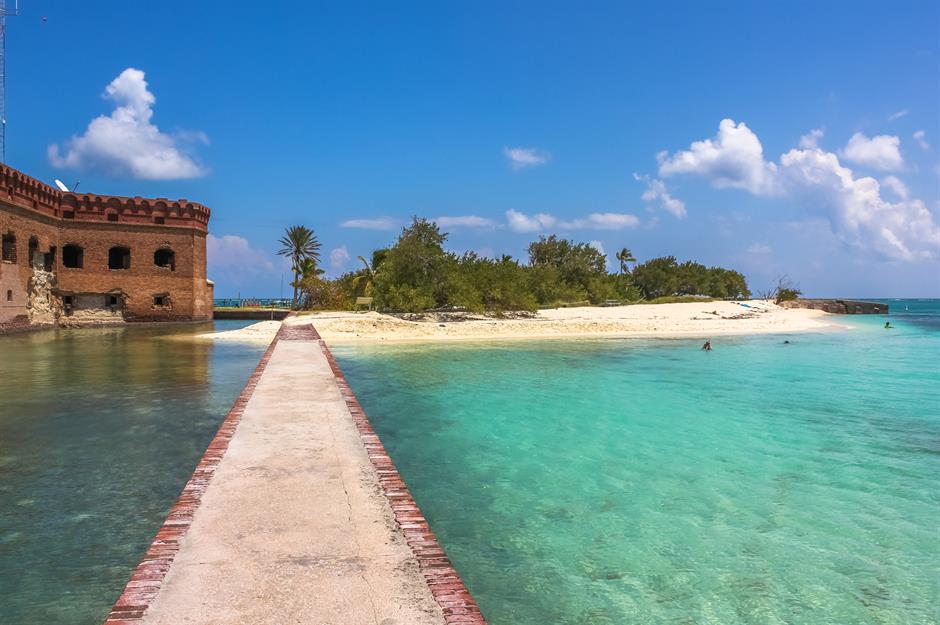 Benny Marty/Shutterstock
Dry Tortugas National Park is a chain of seven islands best known for 19th-century Fort Jefferson. It was originally built to protect the US from attack from the Gulf of Mexico. Elsewhere, sea turtles nest on the sand, while surrounding waters are home shipwrecks, corals and reef sharks. 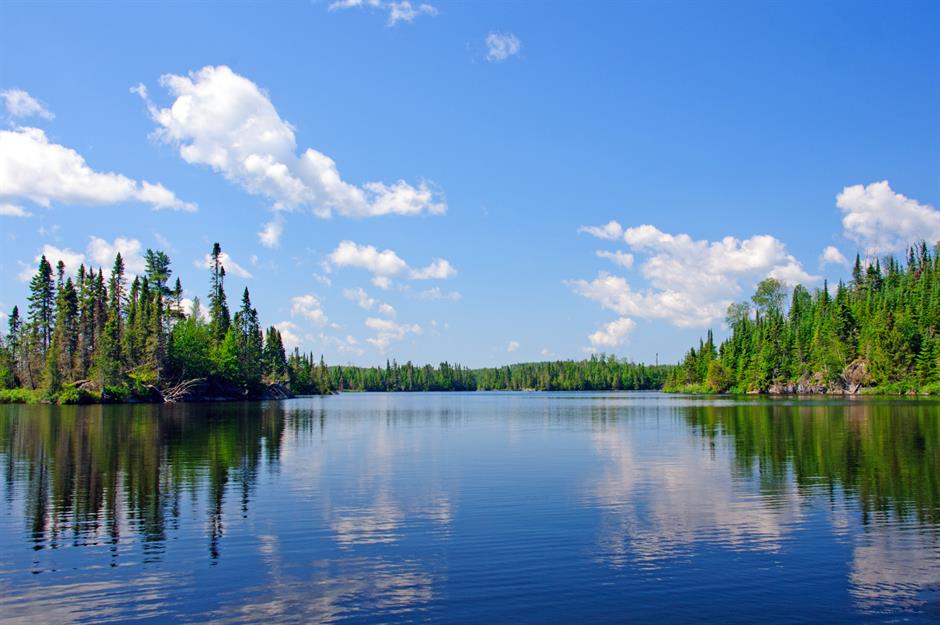 Wildnerdpix/Shutterstock
The Boundary Waters Canoe Area Wilderness stretches along Minnesota’s border with Canada and is part of the Superior National Forest. With 1,000 lakes, rivers and streams, this watery expanse is incredibly peaceful. Black bears are known to hang out by the shore. 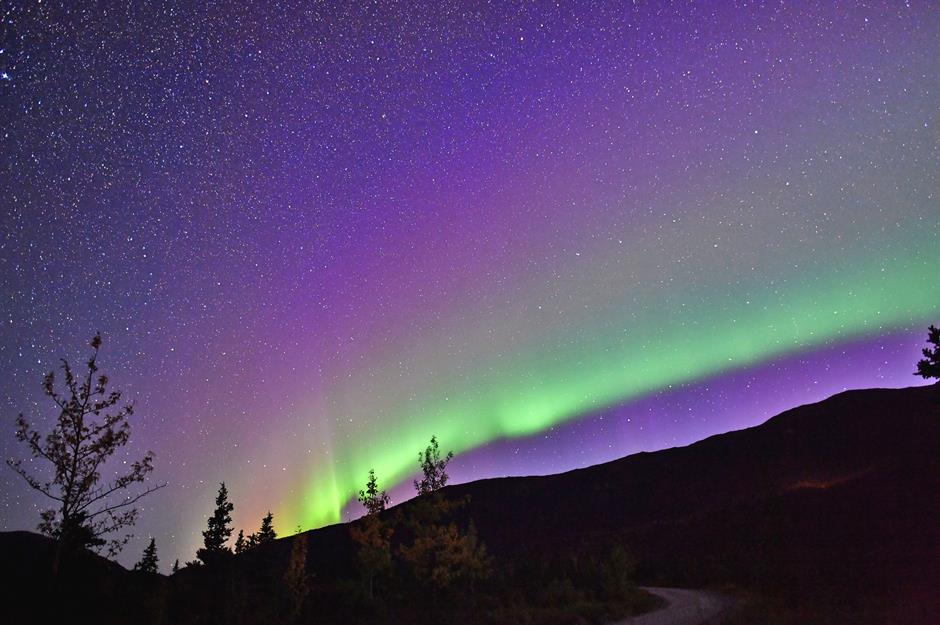 Denali National Park, home to North America's tallest peak, comprises of six million acres of protected alpine forest, glaciers and mountains, roamed by wolves, dall sheep and grizzlies. In winter, the park becomes a ghostly, beautiful place, and one that's even more magical when the glittering, swaying lights of the aurora borealis dance in the sky. Discover more stunning photos of the Northern Lights here. 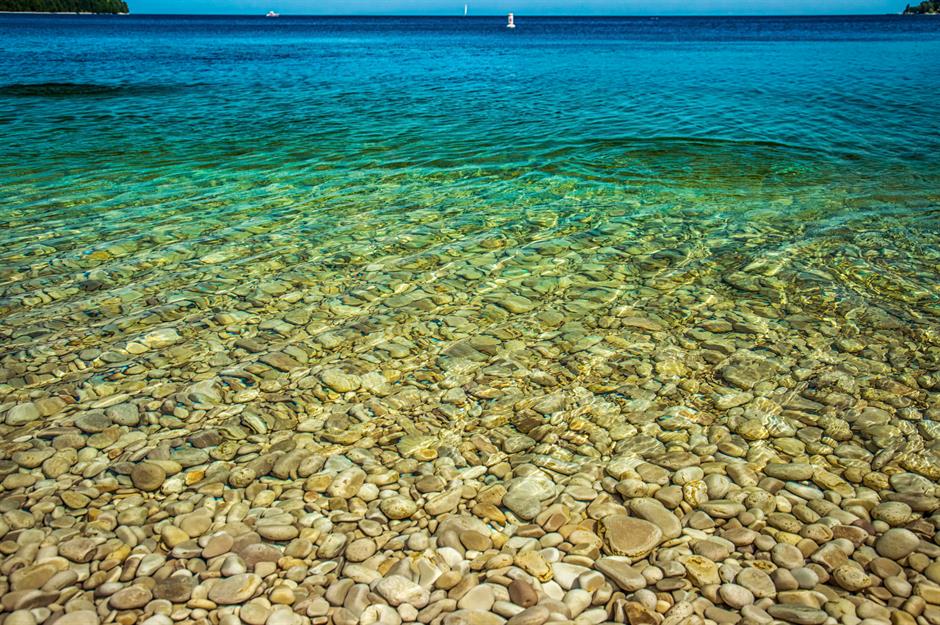 Washington Island is a charming haven with hardwood forests, a famed stone beach and around 700 residents. The air is fragrant with the scent of fresh lavender, which grows abundantly on the 23-square-mile (59.5-sqkm) island. Take a look at 99 beautiful things we love about America.

Anfrew Zarivny/Shutterstock
Former US president Theodore Roosevelt declared Burney Falls, a broad, spring-fed waterfall that crashes into a shimmering pool, the "eighth wonder of the world". You could heap equal praise of many parts of Shasta Cascade, a glorious area of mountains, forests, lava beds and lakes northeast of San Francisco. 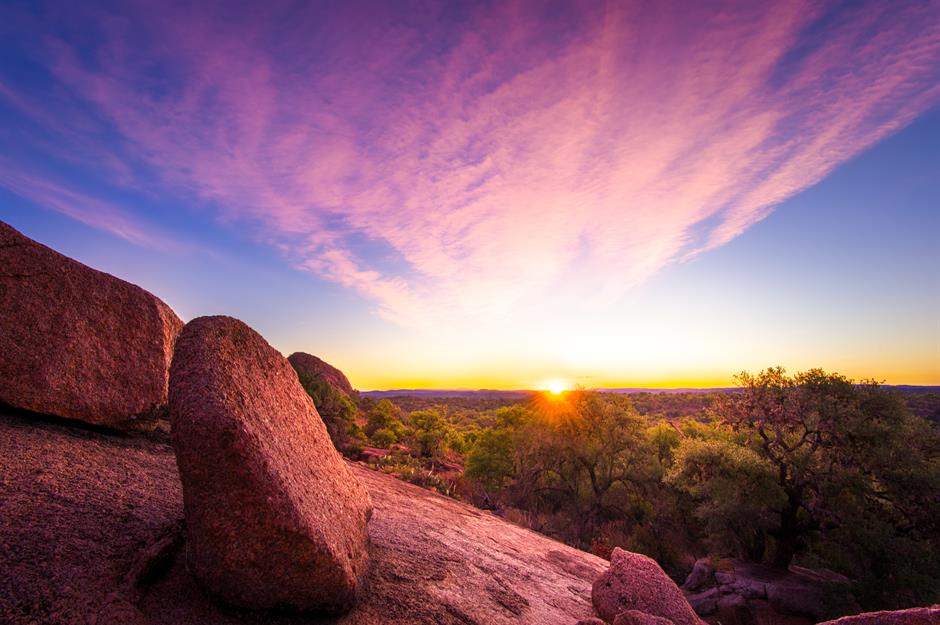 An hour outside Austin, Texas Hill Country is a sprawling area of incredible natural beauty. It's a bucolic region of rugged hills that give way to lush plains and valleys. The area is most famous for its wildflowers, in particular bluebonnets, which come out in full force in spring. These are more of America's most stunning natural wonders. 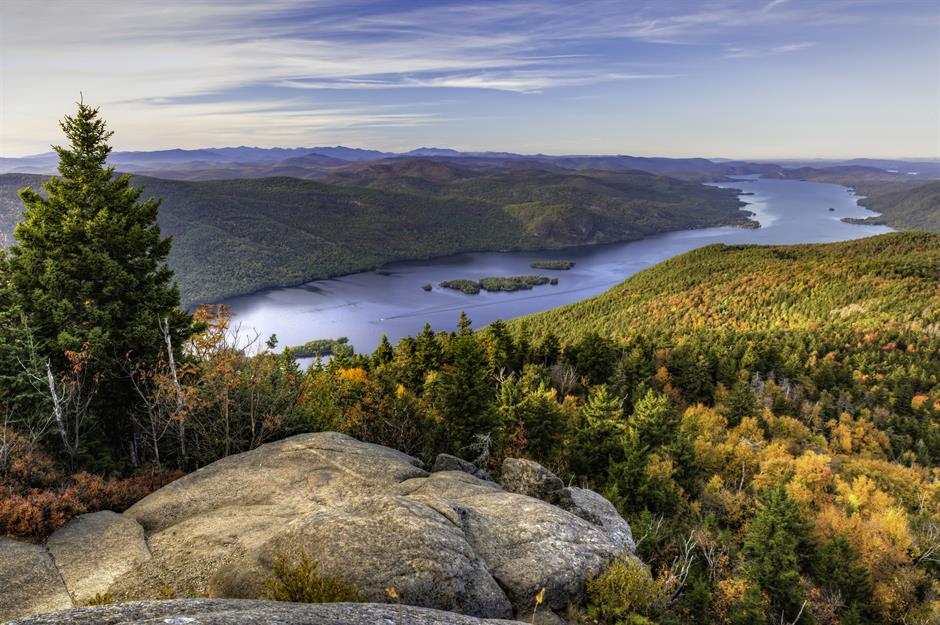 A few hours north of New York City, skyscrapers are swapped for mountain peaks, whose snowy winter caps melt into rivers and lakes come spring. Sidewalks are replaced with tree-lined paths and wildflower meadows. The Adirondacks, named for the mountain range that wiggles through here, is absolutely breathtaking. Now discover the most wonderful views on Earth. 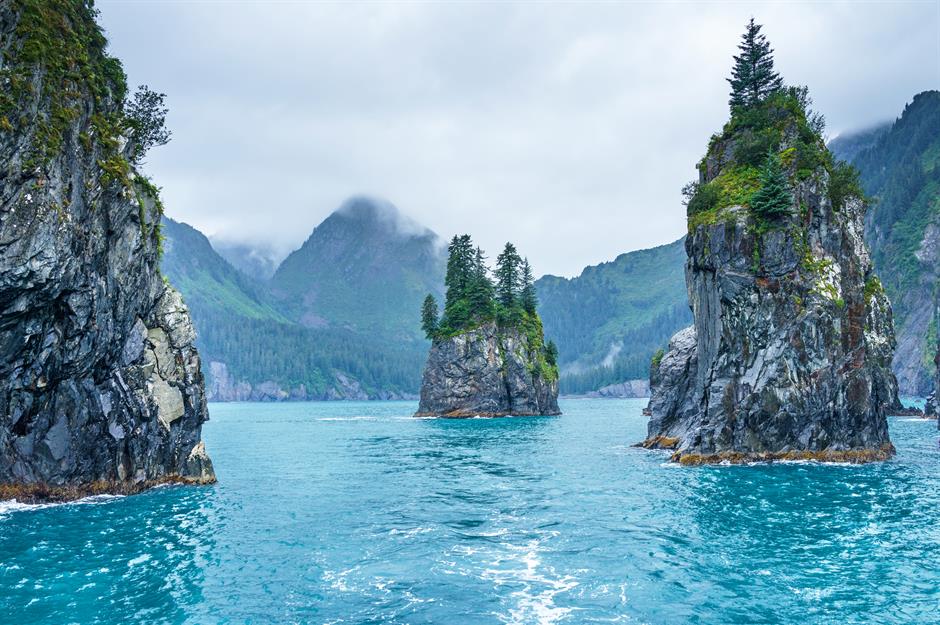 Sekar B/Shutterstock
Kenai Fjords is one of Alaska’s smallest national parks, although it punches above its weight when it comes to gaspingly beautiful scenery. In Resurrection Bay, glaciers like solid, sculpted meringues are mirrored perfectly on the water’s surface. Wildlife that call Kenai Fjords home include moose and clown-faced puffins.