30 of the world's most beautiful bridges

Crossings have never looked so good 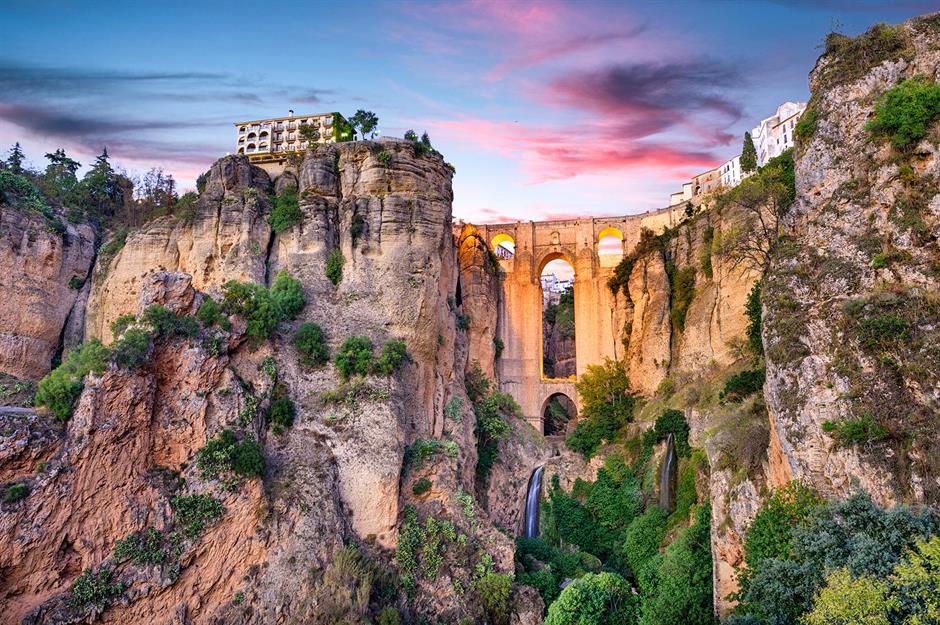 Sean Pavone/Shutterstock
Whether it's a crumbling old aqueduct or a striking hi-tech construction, a bridge can tell you a surprising amount about a place and its history. Spanning everything from the ornate to the out-there, we've rounded up some of the world's most spectacular bridges so you can take a tour from home. 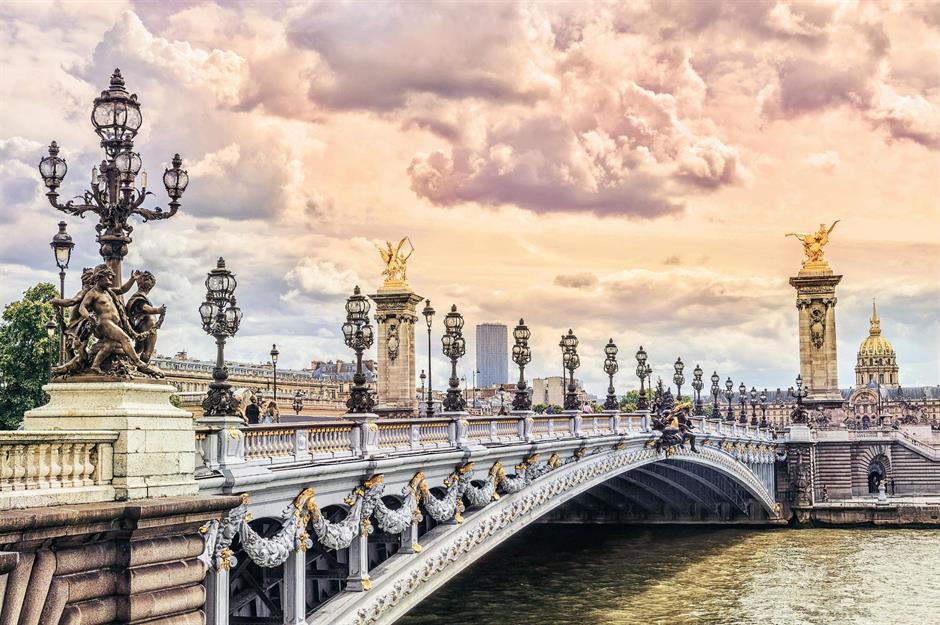 Pont Alexandre III is probably Paris's most ornate and elaborately designed bridge, resplendent with nymphs, winged horses, cherubs and more. Dating to the late 19th century, it soars across the Seine, connecting the Champs-Élysées area with Les Invalides and the Eiffel Tower, and is named for Russian Tsar Alexandre III. 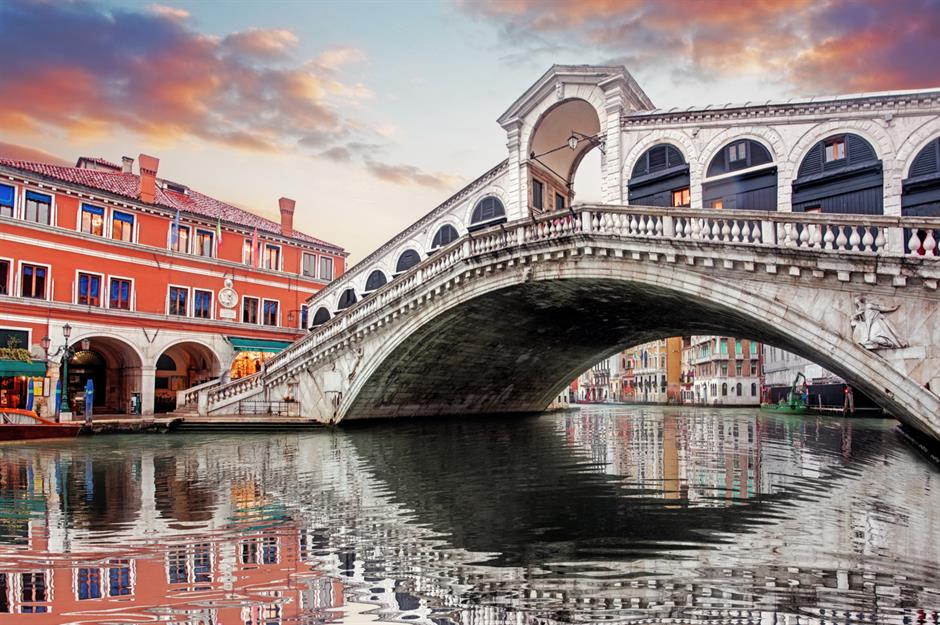 The 16th-century Rialto Bridge – or Ponte di Rialto – crosses over the narrowest point of Venice's Grand Canal, and is held up as a great feat of Renaissance-era architecture. An elegant arch complete with stone reliefs, Rialto replaced a wooden structure that had existed here since the 12th century and today it's the oldest bridge to span the famous canal. 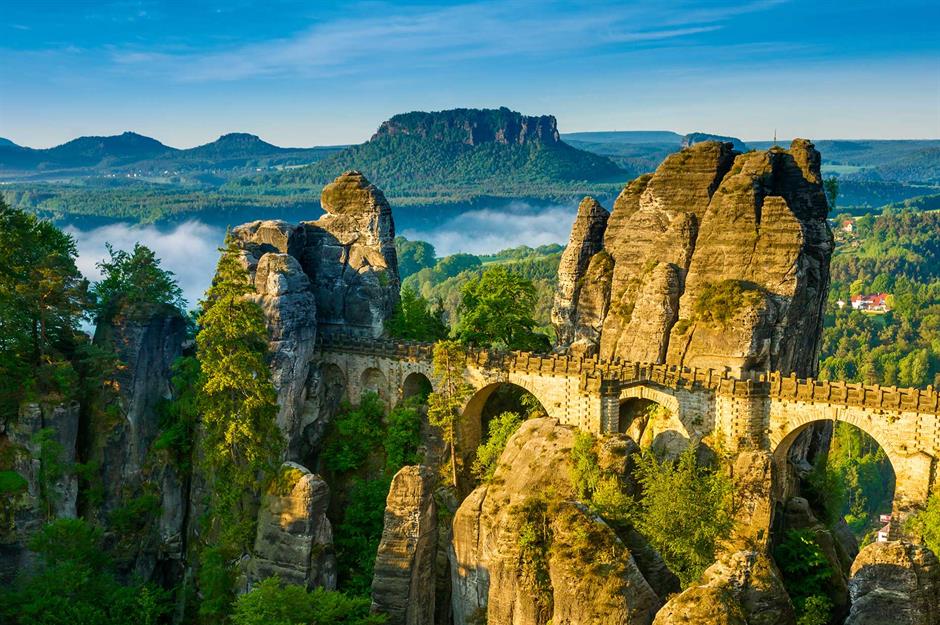 Ugis Riba/Shuttterstock
The photogenic Bastei Bridge lies around an hour from the buzzy city of Dresden, in Germany’s Saxon Switzerland National Park. A breathtaking sandstone structure with panoramic views over the Elbe River, the current bridge was built in 1851 and beats a path through Bastei's rocky landscape. 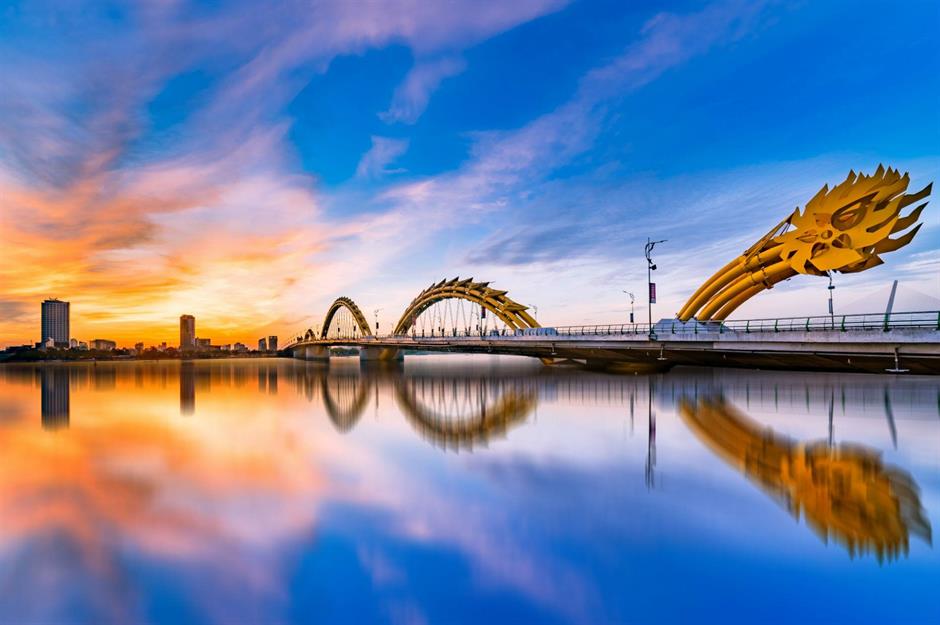 TBone Lee/Shutterstock
Bold, eye-catching and certainly memorable, Dragon Bridge in Vietnam’s Da Nang is – as its name suggests – fashioned to look like a fearsome dragon. Arching over the River Hàn, the bridge measures a total length of 1,864 feet (568m) and the striking metallic creature can even breathe fire or water to mark special occasions. 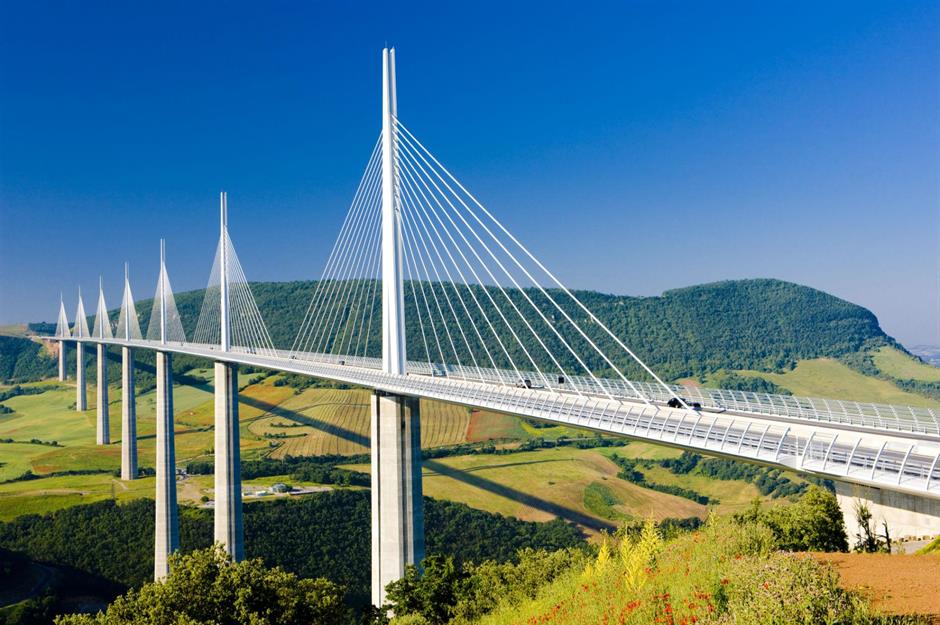 PHB.cz (Richard Semik)/Shutterstock
Located in southern France, the Millau Viaduct, or Viaduc de Millau, broke plenty of records when it opened in 2004, with the highest pylons in the world and the highest road bridge deck in Europe. Impressively, the mighty structure also weighs five times as much as the Eiffel Tower and is longer than the Champs-Elysées. 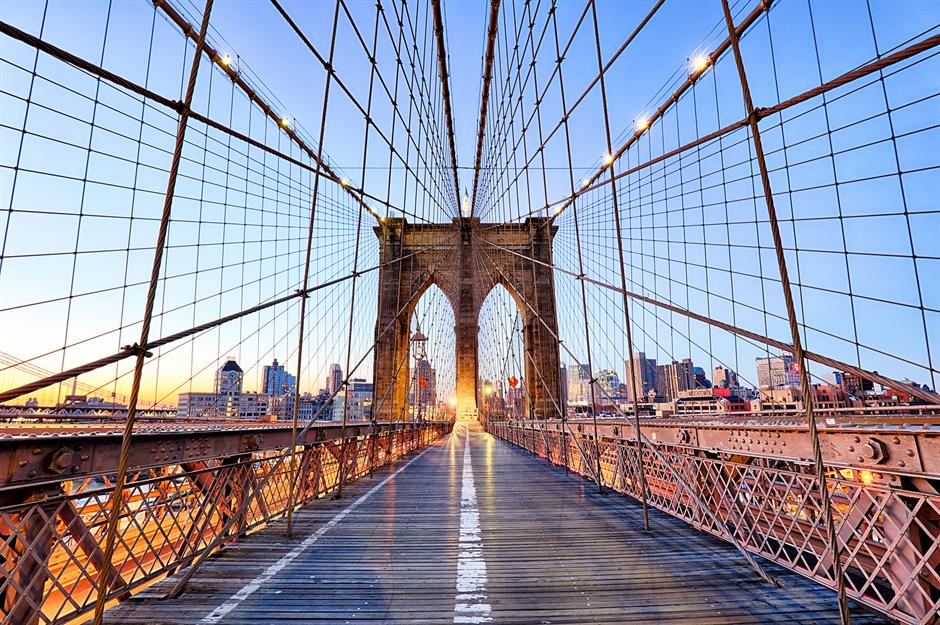 Completed in 1883, Brooklyn Bridge is one of New York City's most famous sights and it has a rich history too. Given the bridge's lengthy span, New Yorkers were initially nervous of setting foot on the structure, and this fear was heightened after a stampede on the bridge killed 12 people. To help quell these anxieties, notorious circus man P. T. Barnum paraded 21 of his elephants across the length of the bridge to prove that it was safe. Now thousands of vehicles and pedestrians cross this East River bridge on a normal day. 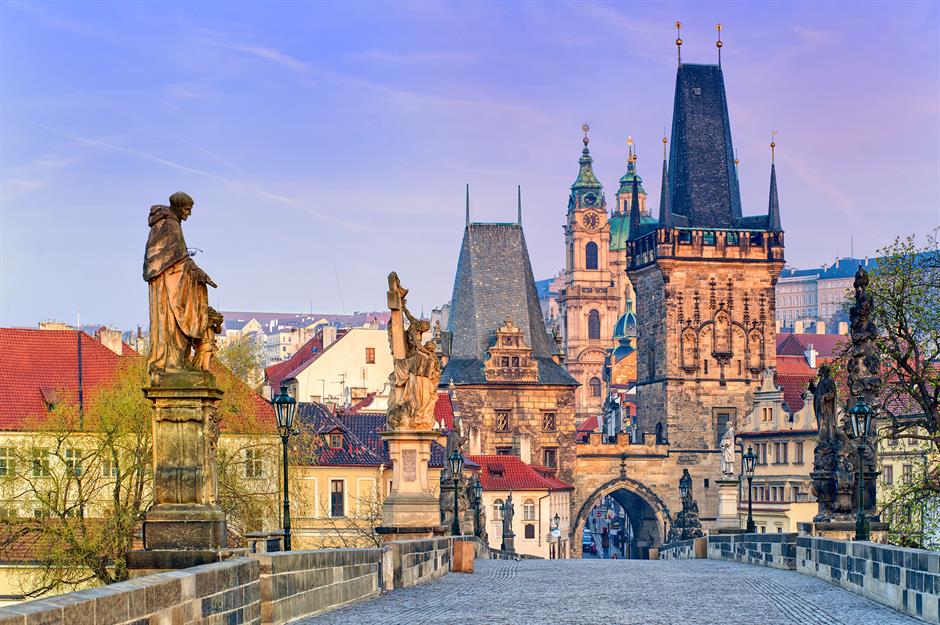 Boris Stroujko/Shutterstock
The Czech Republic’s famous bridge is just one of many striking sights in the capital city of Prague. Built over 600 years ago, Charles Bridge stretches across the Vltava River, and is decorated with 30 stone statues of saints. The Gothic Old Town Bridge Tower stands proud at its eastern end. 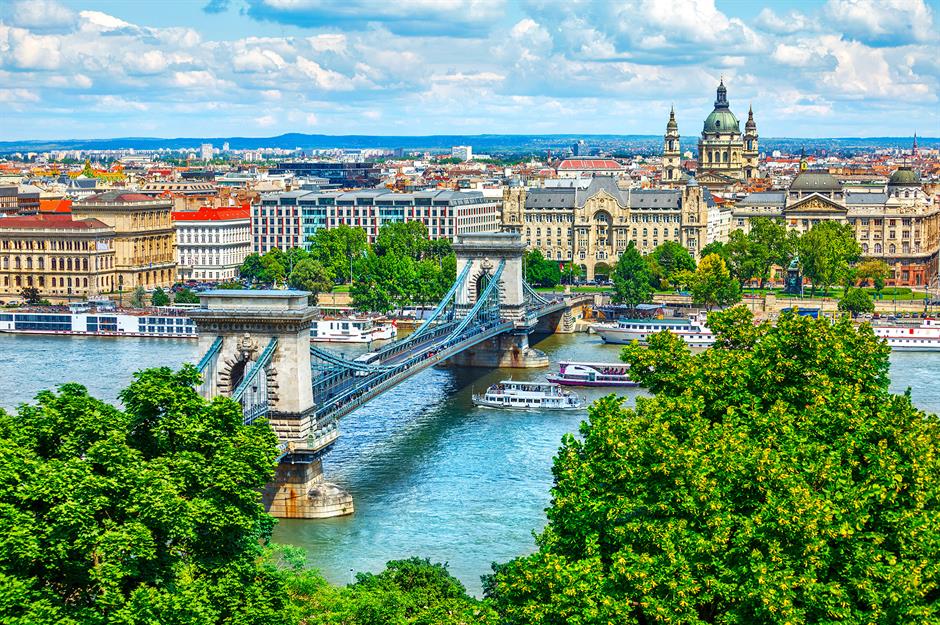 Yasonya/Shutterstock
Budapest’s most famous bridge, the Széchenyi Chain Bridge links Buda and Pest, the western and eastern sides of the city, across the River Danube. Its hulking towers usually draw tourists in their droves, but it's not just one of the city's most photogenic sights – it's also a symbol of unity between Budapest's two halves. 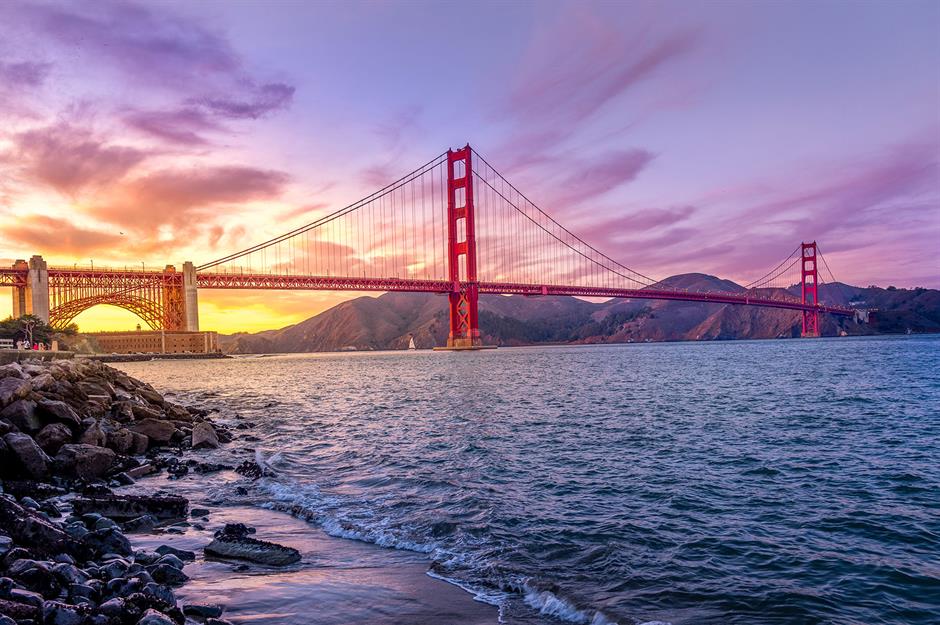 San Francisco’s most famous landmark, the 1.7-mile-long (2.7km) Golden Gate Bridge is an instantly recognisable structure. One of the "Seven Wonders of the Modern World" according to the American Society of Civil Engineers, the bridge opened in 1937 and was painted in International Orange to provide visibility in the fog for passing ships. You can discover the most impressive bridge in every state too. 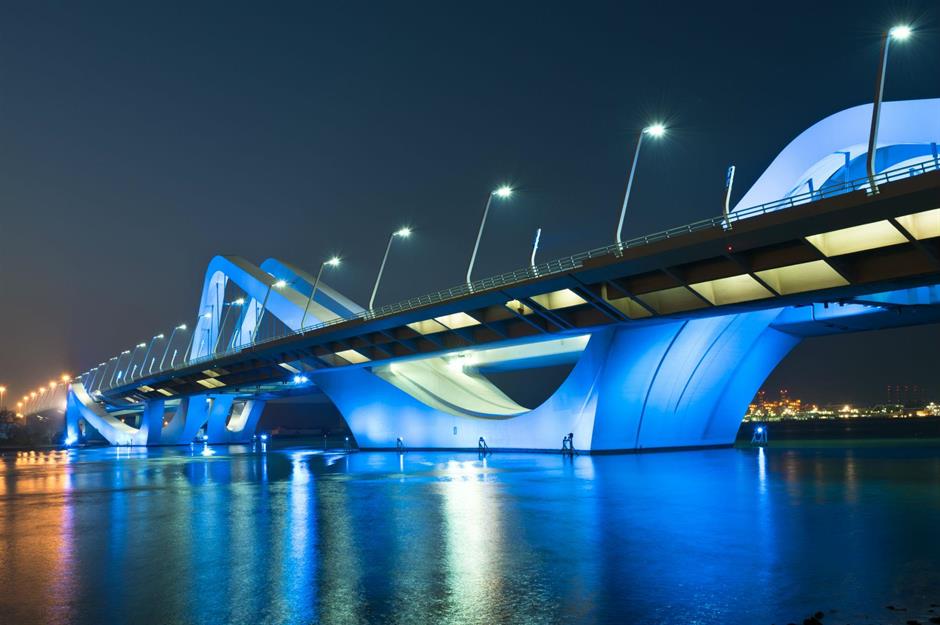 dvoevnore/Shutterstock
Designed by renowned architect Zaha Hadid, the striking 2,762-foot-long (842m) Sheikh Zayed Bridge in Abu Dhabi certainly makes a statement with its curved arches and mammoth size. It soars to 197 feet (60m) above sea level at its tallest point, and looks best after dark when it's illuminated with coloured lights. 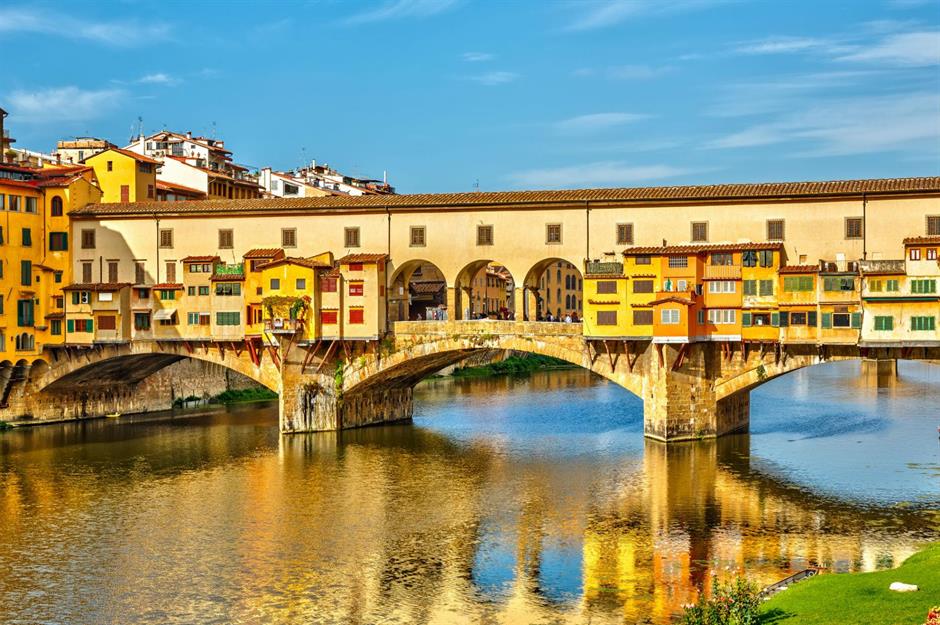 A bridge has existed here since at least 966, though Ponte Vecchio in Florence has been devastated by flooding twice in its history. It's not clear what year the present construction dates to, but it's now one of Italy's most recognisable bridges. There have been stores on the bridge for centuries too, but while they were once predominately butchers' shops and fishmongers, they now sell jewellery and souvenirs. 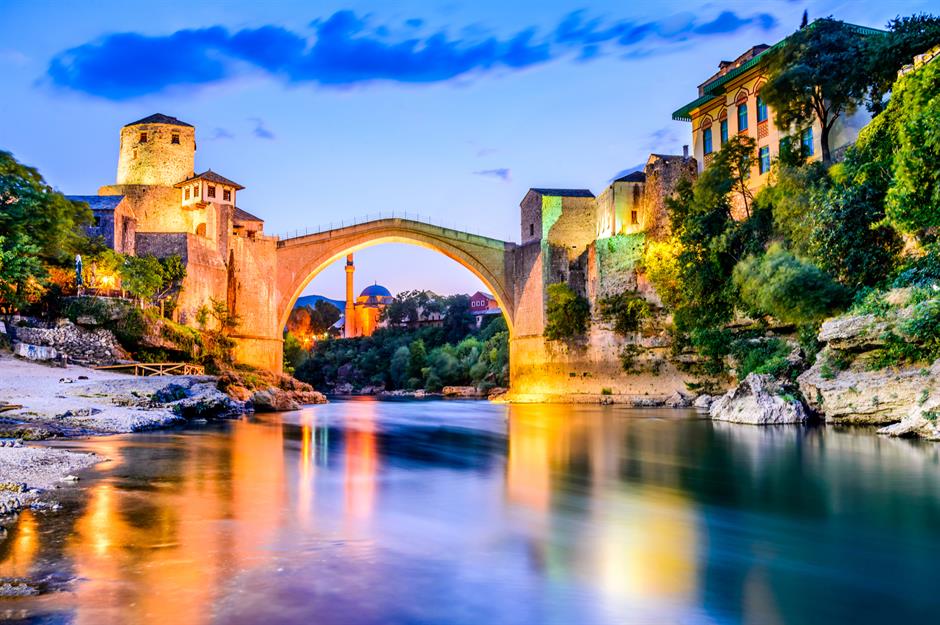 cge2010/Shutterstock
Mostar’s Stari Most (meaning "Old Bridge") crosses the river Neretva and is actually a modern reconstruction, after the original (finished in the 16th century) was destroyed during the Croat-Bosniak war. The historic city of Mostar, which has recently been restored and rebuilt, is now a UNESCO World Heritage Site. Its architecture boasts a fascinating mix of pre-Ottoman, eastern Ottoman, Mediterranean and western European influences.

Bridget Calip/Shutterstock
Constructed in 1929 over the space of just six months, the Royal Gorge Bridge held the title as the highest bridge in the world for over seven decades. Though it has since lost that honour, it still stands as the highest in the USA at a whopping 955 feet (291m) above the Arkansas River. 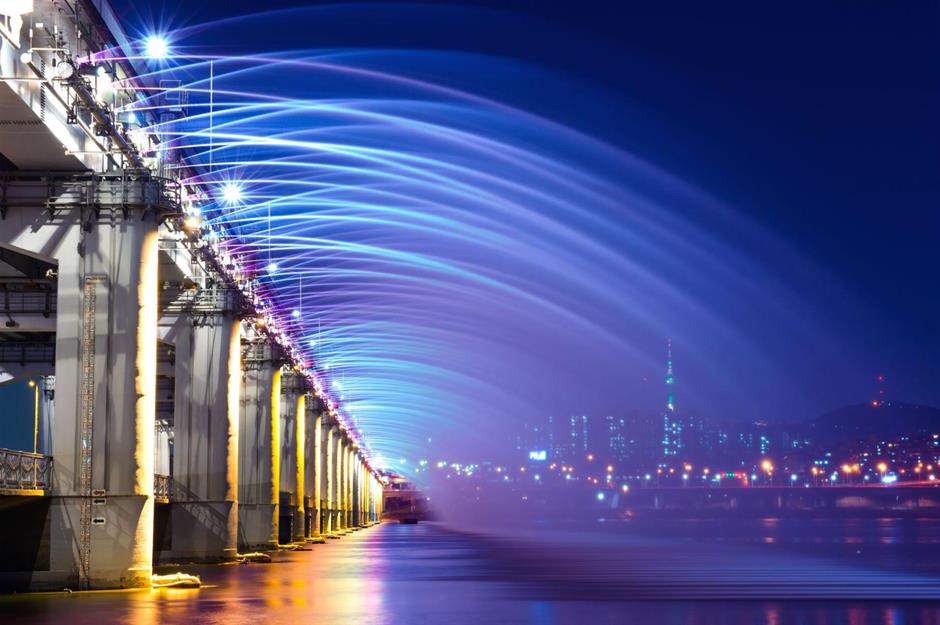 Guitar photographer/Shutterstock
Seoul’s bold and colourful Banpo Bridge spans the Han River and connects the districts of Seocho and Yongsan. It has become famous for its Moonlight Rainbow Fountain show, in which beautiful LED lights shine, music plays and almost 200 tonnes of water passes through both sides of the bridge every minute. 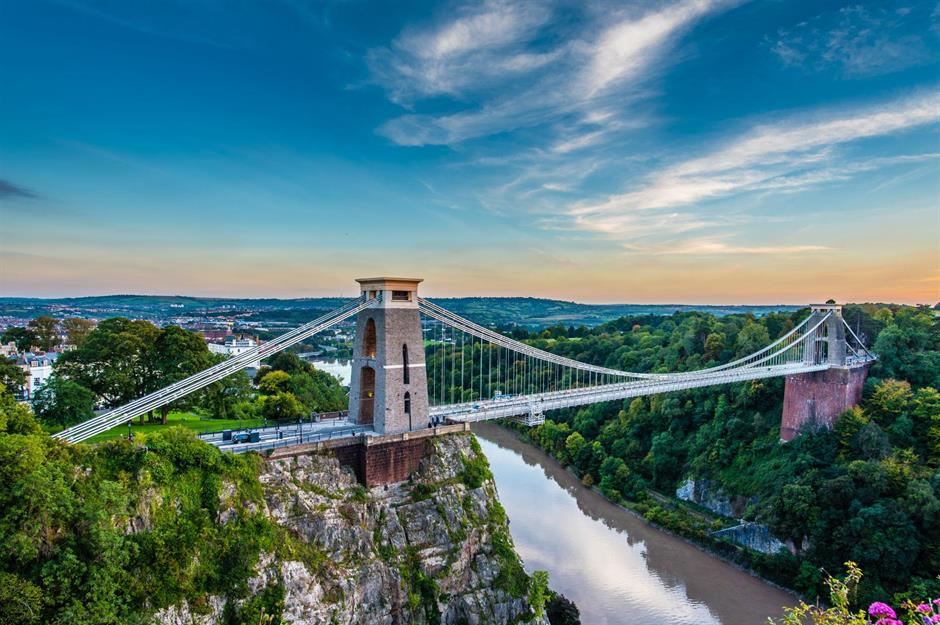 Sion Hannuna/Shutterstock
Bristol’s famous Clifton Suspension Bridge was initially designed in the early 19th century for light horse-drawn traffic, but now more than 11,000 vehicles usually cross it every day. The bridge’s gorgeous setting on the cliffs of the Avon Gorge, above the River Avon, is a sight to behold too. 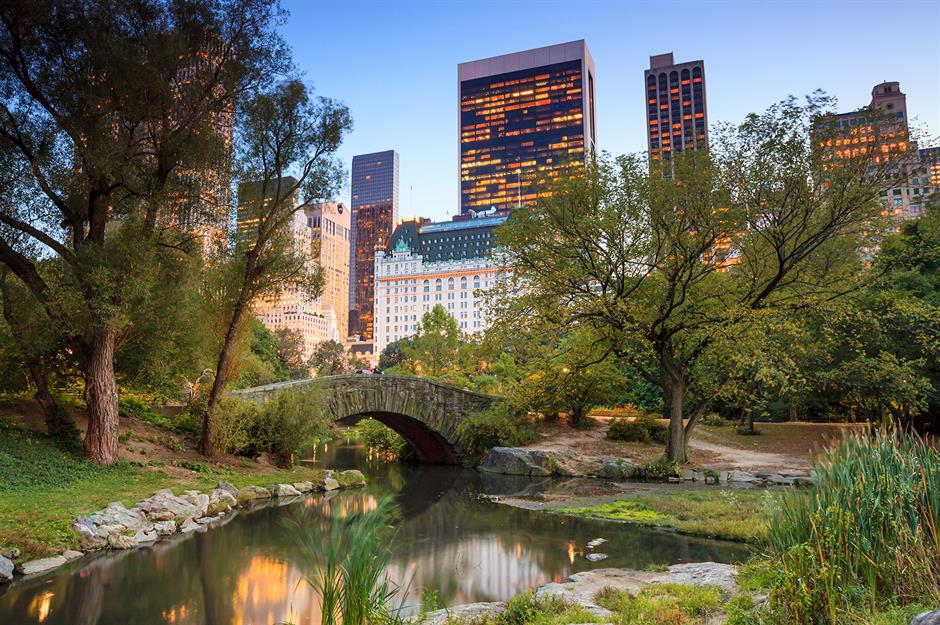 f11photo/Shutterstock
While the Big Apple may be more famous for Brooklyn Bridge, the charms of Central Park's Gapstow Bridge win us over every time. A neat stone arch dating to 1896, it's nestled among the trees and grasses of New York's Green Lung and set against its towering skyscrapers. 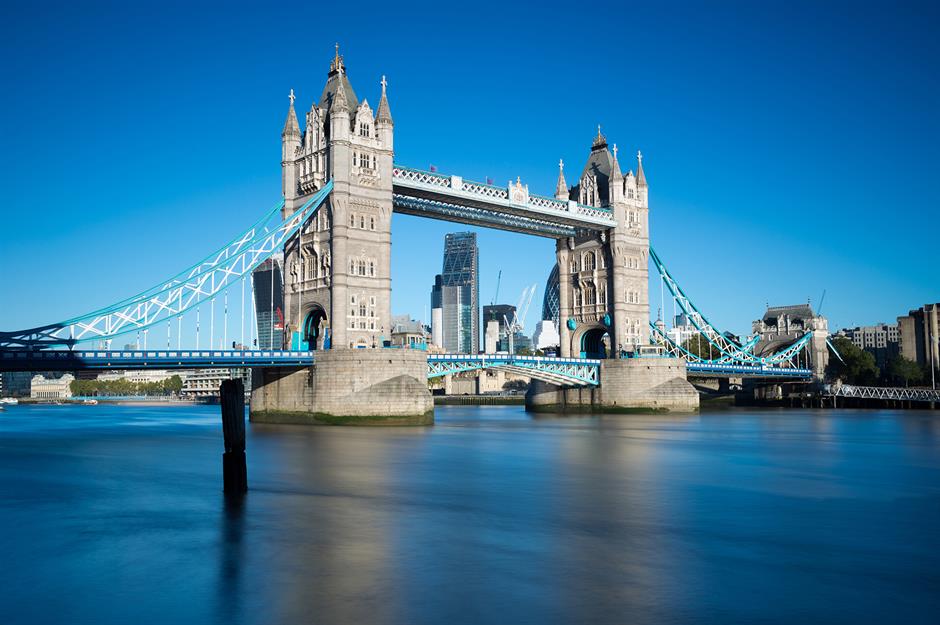 Completed 126 years ago, Tower Bridge (not to be confused with the simpler London Bridge to the west) is one of London's most recognisable landmarks, known for its Victorian engine rooms and its glass-bottomed viewing deck. Upon its completion it was one of the largest bascule (moveable) bridges in the world and its hulking towers and bold blue expanse remains an icon of the Big Smoke to this day.

The Torensluis, Amsterdam, The Netherlands 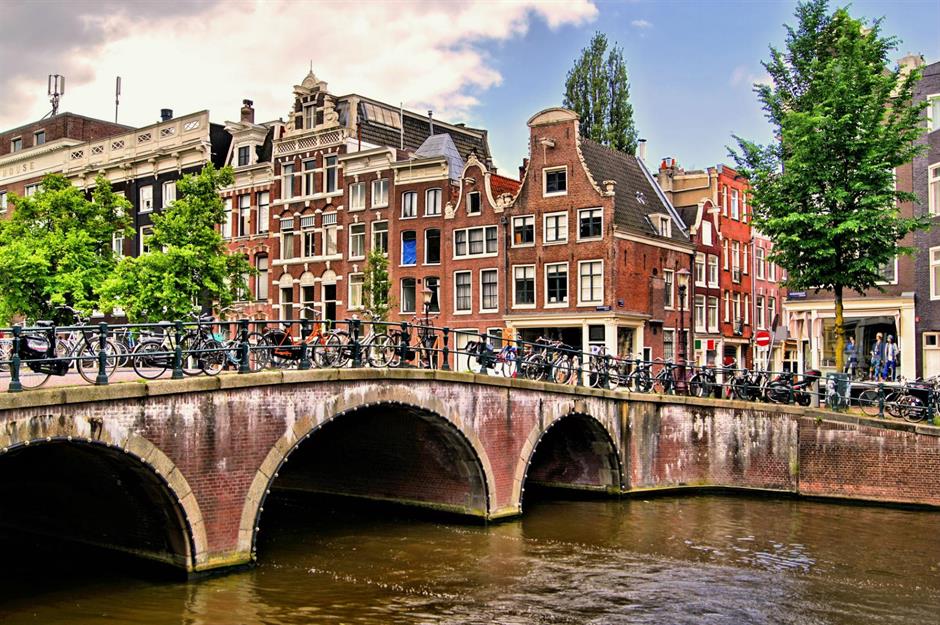 With over 1,200 bridges in Amsterdam, it’s hard to choose the most beautiful, but the Torensluis is certainly a strong contender. Once the site of the Jan Roodenpoortstoren tower, the structure gets extra points for being one of the city's oldest and widest bridges too. It stretches across Amsterdam's famed Singel canal. 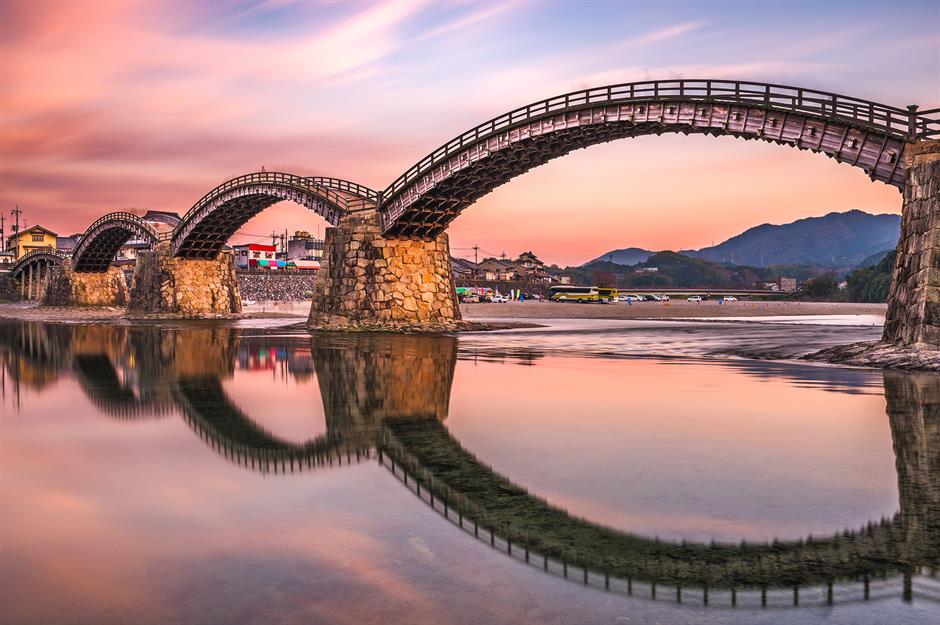 The picturesque Kintai Bridge is an architectural masterpiece in Japan's Yamaguchi Prefecture. It's made up of five graceful wooden arches stretching neatly over the Nishiki River and was originally built in 1673. Today's bridge is actually a 20th-century reconstruction, since the first structure was destroyed in a typhoon, but it's equally as beautiful as the original. Now take our quiz: can you guess these famous landmarks from their close-ups? 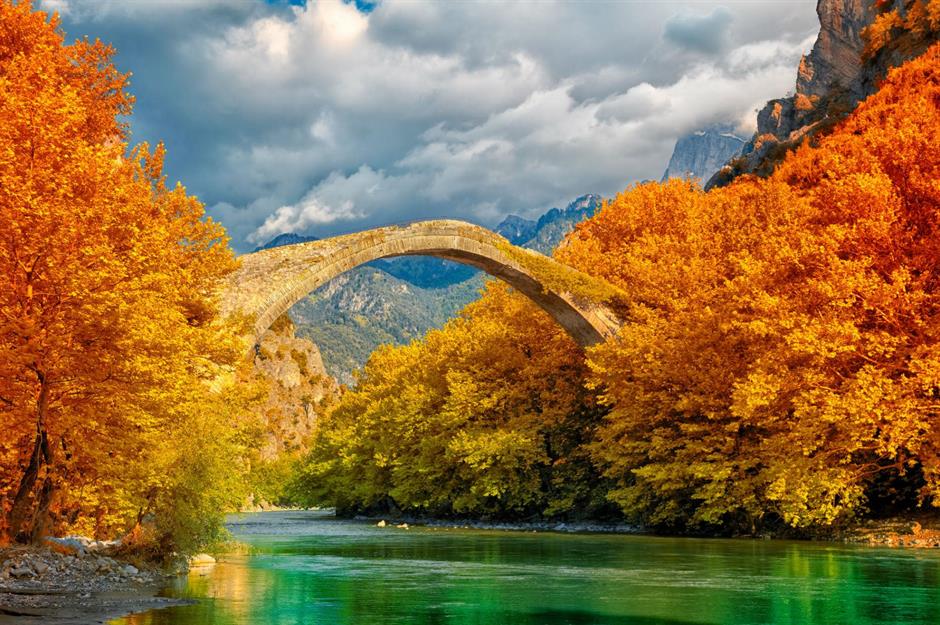 Gabriela Insuratelu/Shutterstock
The picturesque Konitsa Bridge – sometimes nicknamed the Aoos Bridge after the river it crosses – is one of the highest of its kind in Greece, and a highlight of this little town. The structure was built in 1870, after earlier attempts at bridging the Aoos failed, and it rises to around 66 feet (20m). 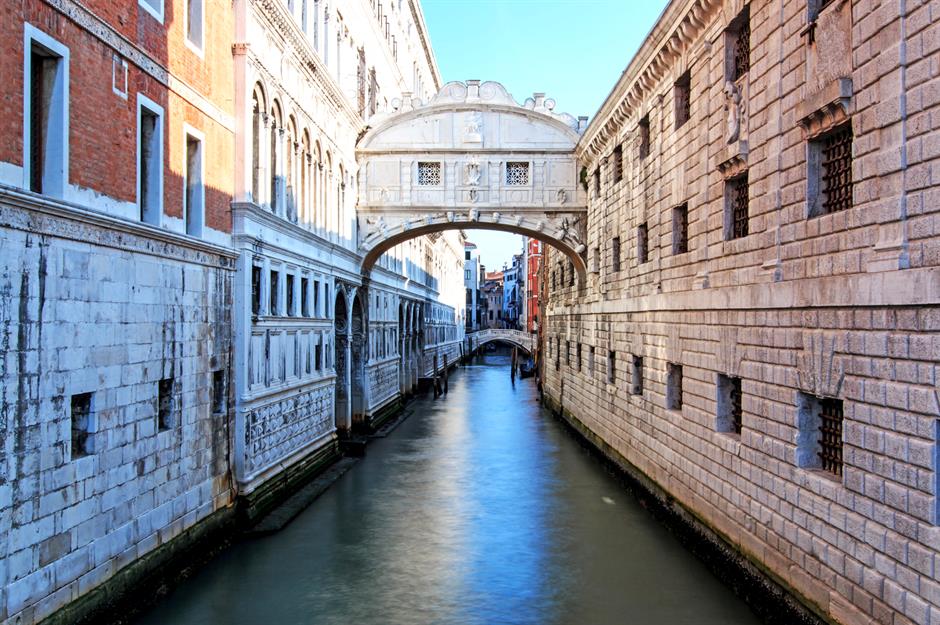 Often touted as one of the most beautiful bridges in the world, and certainly one of the most photographed, Venice’s Ponte dei Sospiri, or Bridge of Sighs, was constructed around 1600. It was built to connect the old prison and interrogation rooms in the Palazzo Ducale to the newer prison across the canal, and its name reportedly comes from the sighs of the prisoners who crossed its expanse. Legend has it that if a couple kisses under the bridge while on a gondola at sunset, they will enjoy eternal love. 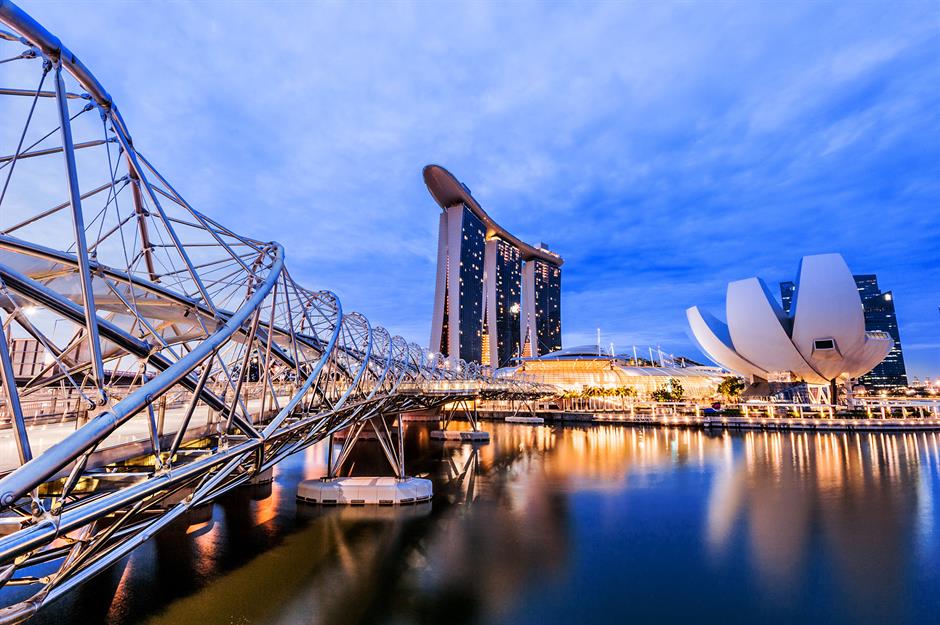 Just one of the city's many striking feats of architecture, Singapore's Helix provides a walkway across the Singapore River, between the city’s central business district Marina Centre and Marina South in the Marina Bay area. Its name comes from its futuristic structure, which resembles a double helix. 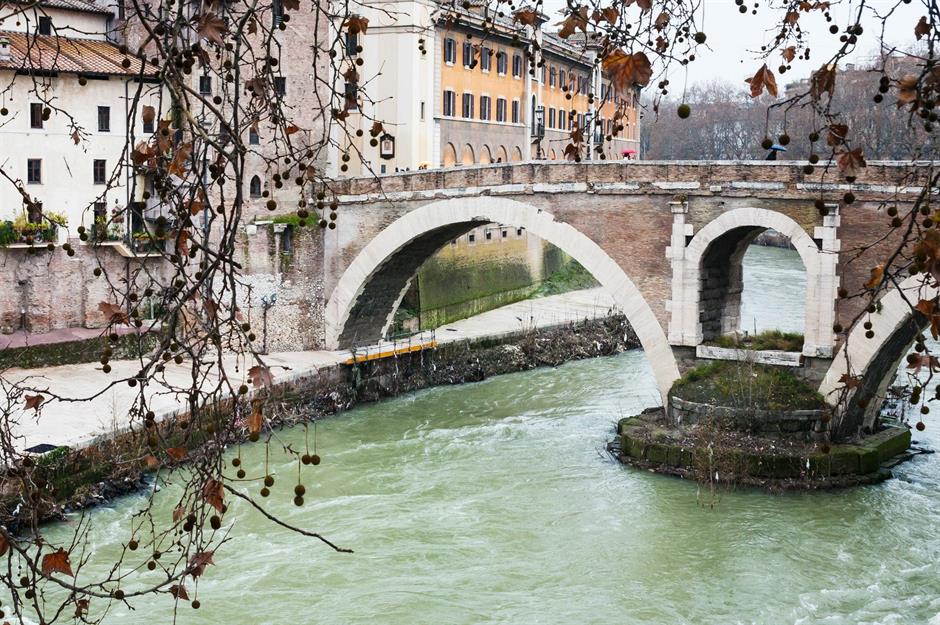 The oldest Roman bridge in Rome, the Pons Fabricius (also known as Ponte dei Quattro Capi) was built in 62 BC to replace a wooden bridge destroyed in a fire. Its Italian name, Quattro Capi ("four heads") refers to the striking double-faced herms which were moved to the bridge in the 14th century. Discover more fascinating facts about the world's Roman ruins too 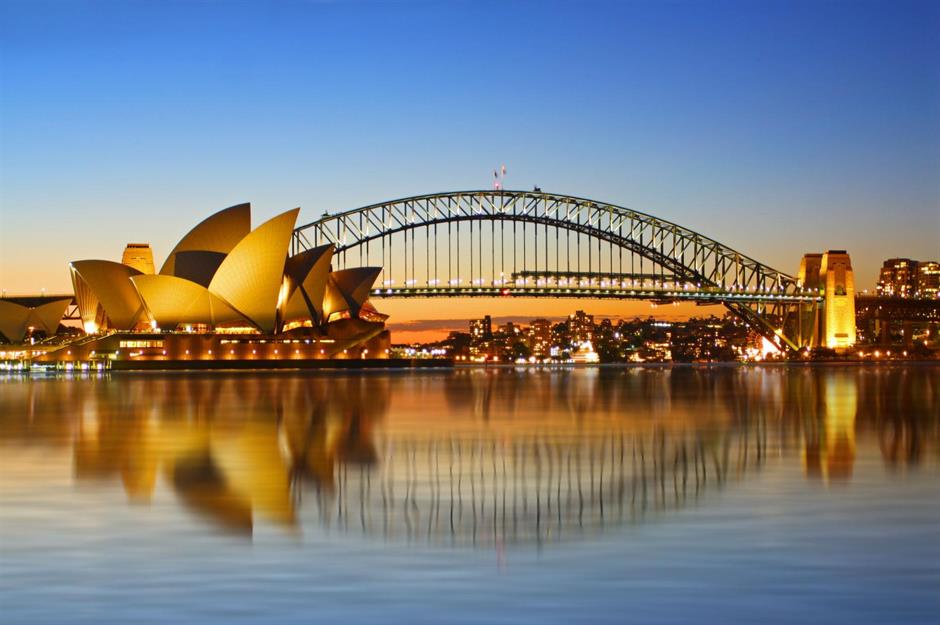 Sydney's Harbour Bridge is one of the world's largest steel-arch bridges, connecting the city's northern suburbs with its buzzing centre. But, impressive as it is, it's not all about appearances – the structure is an important functioning bridge too, with more than 200,000 cars travelling over it on an average day. 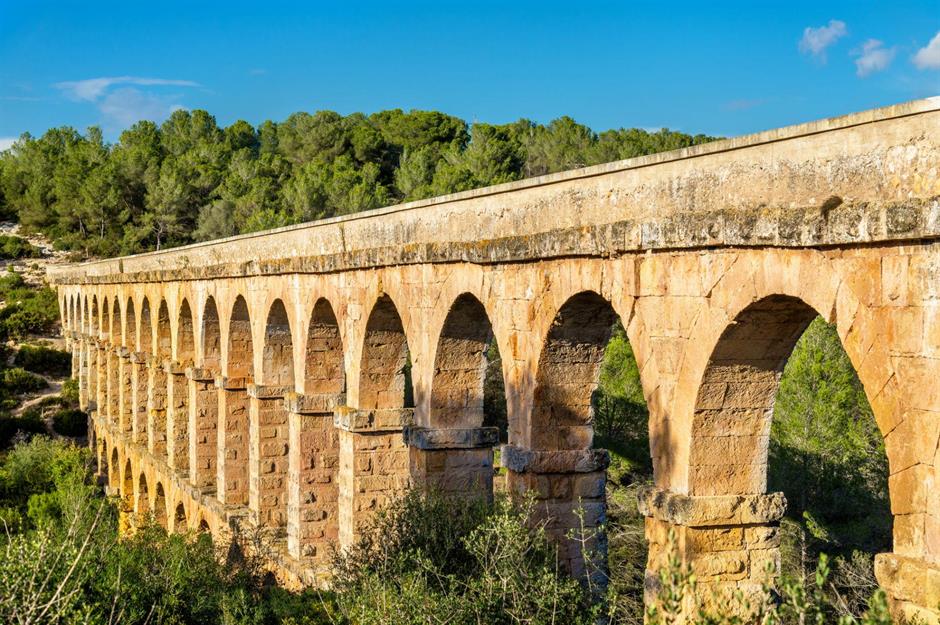 Built to supply the city of Tarragona with water, and now a UNESCO World Heritage Site, this ancient bridge is also known as Pont del Diable, and was once part of a much larger structure. Les Ferreres Aqueduct is still an impressive sight, though, stretching out for 712 feet (217m) and reaching a peak of 89 feet (27m). Now check out these stunning images of Europe's most adorable small towns and villages. 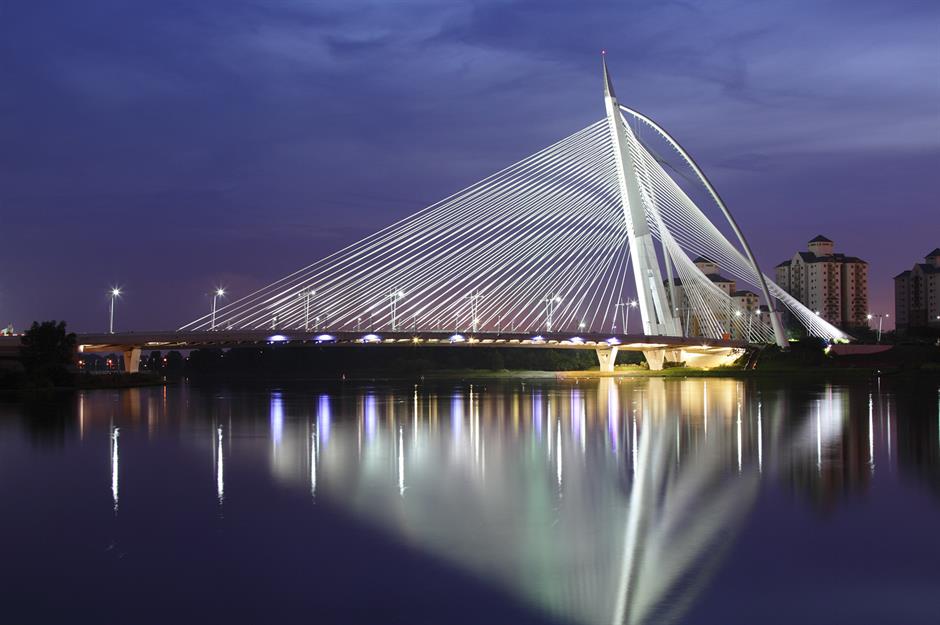 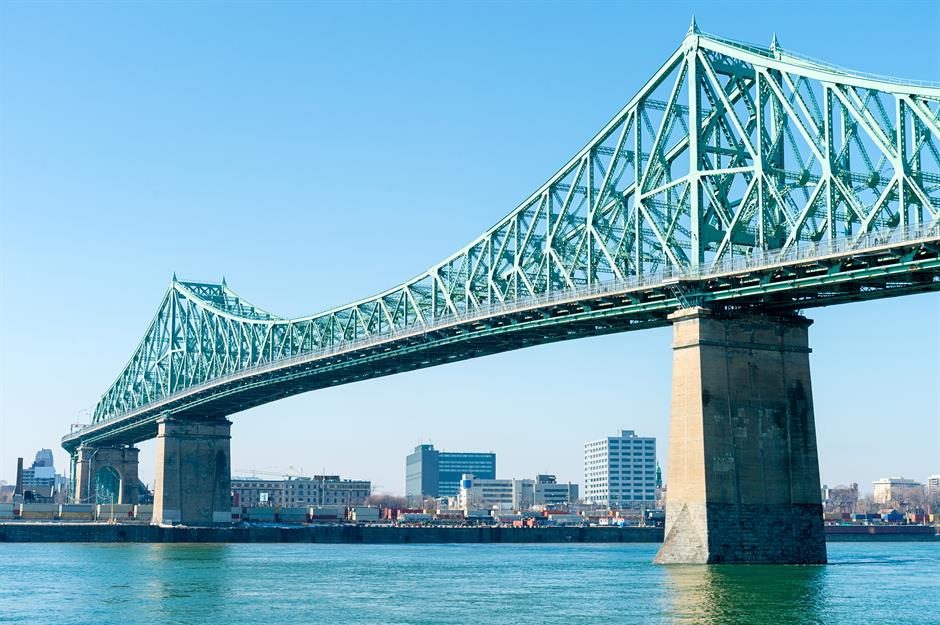 Marc Bruxelle/Shutterstock
Montreal's Jacques Cartier Bridge is not just beautiful, but clever, too. Its intuitive illumination display constantly changes to reflect the season, time of day and the city's "energy", which is decided by weather, traffic and social-media data collected over the course of the day. 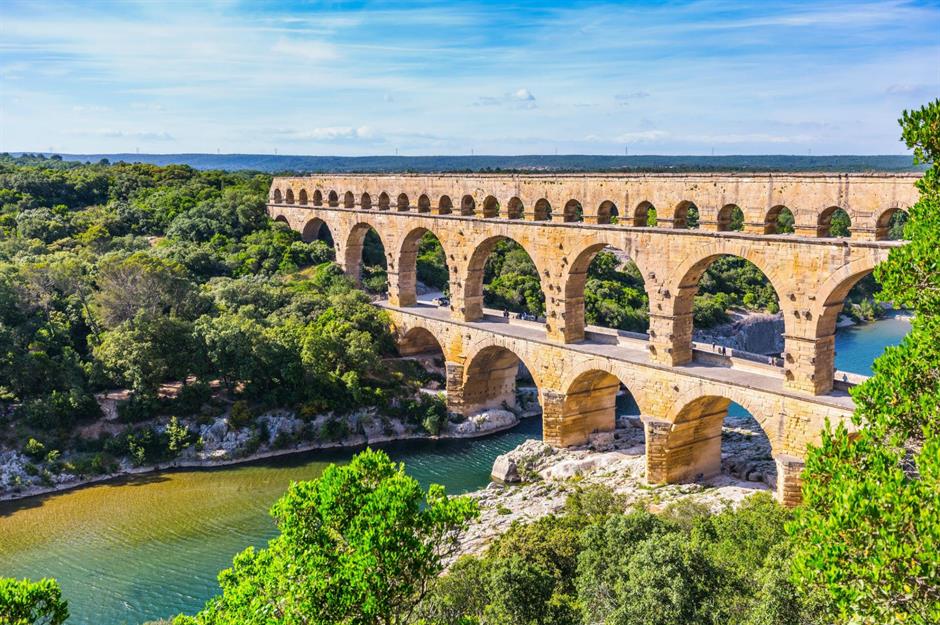 This structure is one of the most impressive ancient monuments in France today. Built halfway through the first century AD, the aqueduct supplied the city of Nîmes with water and is now a UNESCO World Heritage Site. The Museum of the Pont du Gard chronicles the history of the aqueduct's construction and details the way of life here during the Roman era. Now discover the incredible stories behind the world's most historic cities. 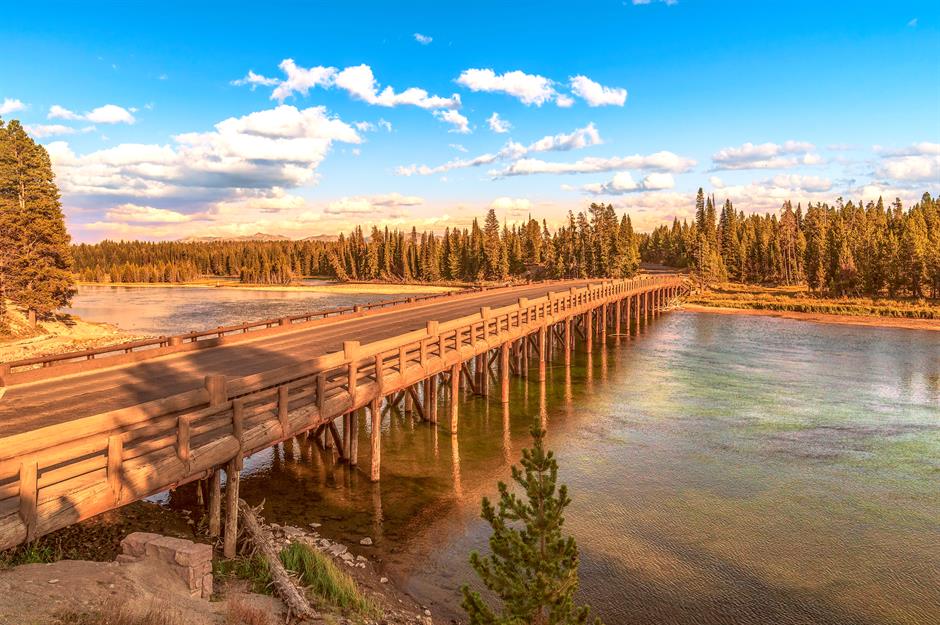 VIKVAD/Shutterstock
It's the incredible landscape of Yellowstone National Park that makes this simple bridge so utterly beautiful. Its wooden expanse slices across Yellowstone River, blending seamlessly with its forested surrounds, and remained a popular fishing spot until 1973, when the activity was prohibited to protect the population of cutthroat trout. The current structure dates to 1937 and replaced an earlier bridge built in 1902. 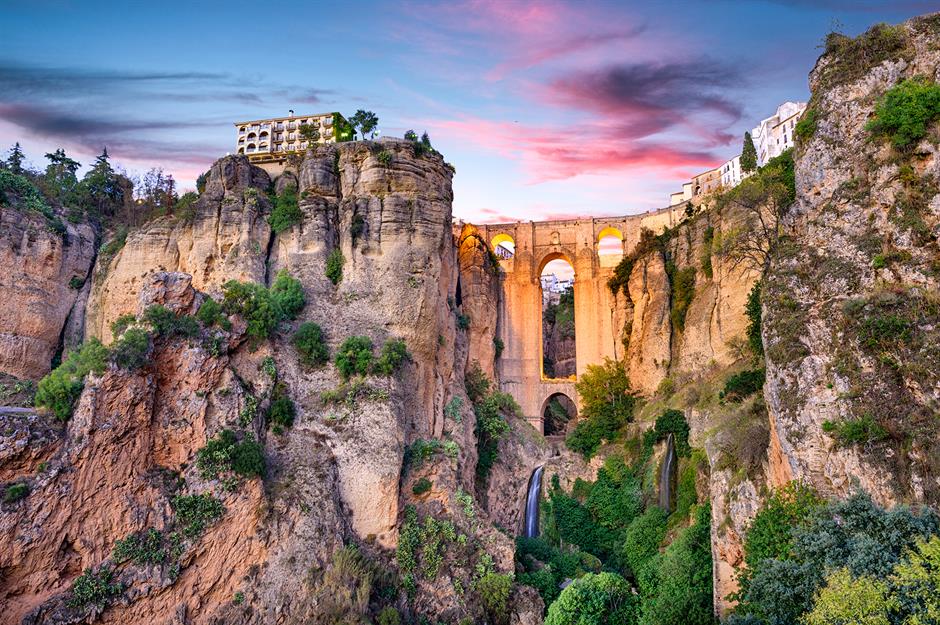 Taking over 30 years to build, Puente Nuevo is the newest of a trio of bridges that stretch over the El Tajo gorge. Completed in 1793, it connects the city's old and new towns. There’s also a history museum here dedicated to the bridge whose building once served as a prison. Now read on to discover the world's most beautiful cities too.