Rob Thorley/Shutterstock
With its rich and long history spanning everything from ancient settlements to world wars, Great Britain is dotted with abandoned communities that are like a window into the past. From empty mining towns and deserted military bases to ruined medieval hamlets and depopulated villages, read on to explore some of England, Scotland and Wales’ most haunting ghost towns you may not know exist. 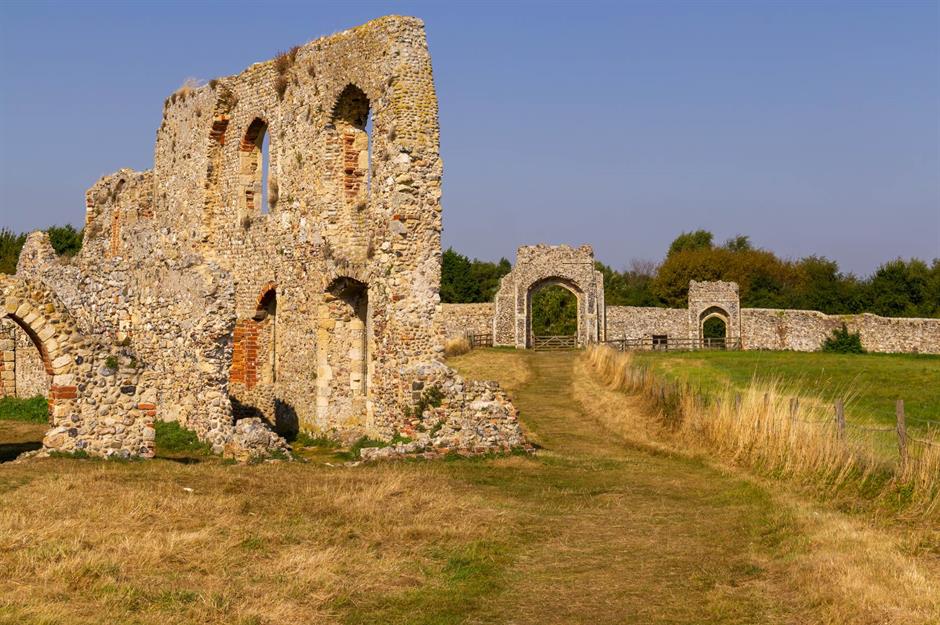 Nicknamed “Britain’s Atlantis”, Dunwich was a thriving medieval port on the Suffolk coast. Dating back to Anglo-Saxon times, it stood as the capital of the Kingdom of Eastern Angles (now known as East Anglia) and was one of the largest towns in the country. By the 11th century, Dunwich was one of the greatest ports on the east coast as well as a religious hub, home to several large churches and monasteries. At its peak, the town grew wealthy from trade, building ships and its impressive fishing fleet. 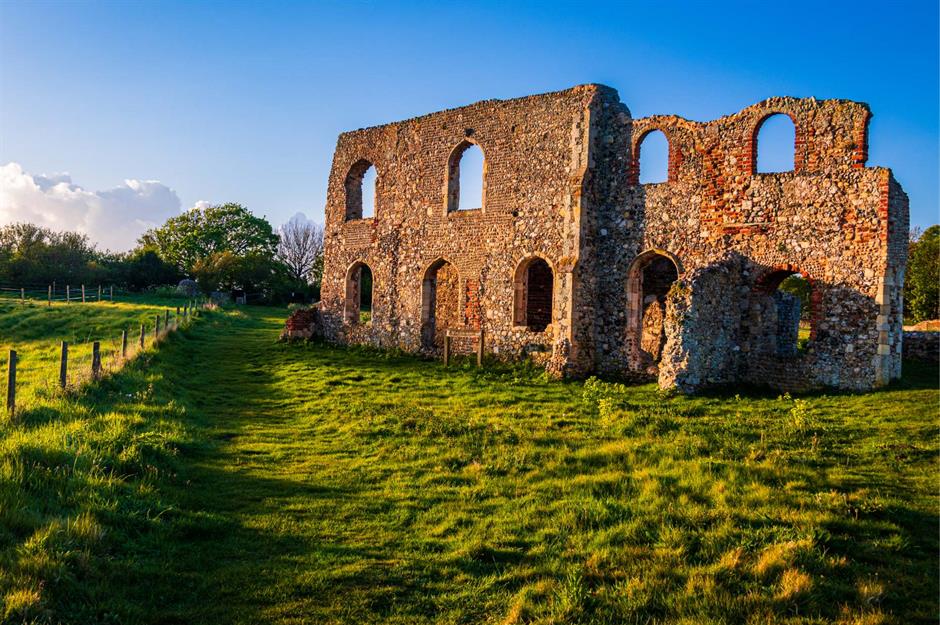 Several violent storms recorded over the years were thought to be the cause of much of the village being destroyed due to erosion and then submerged into the North Sea. Following this destruction, many of its residents left and all that remains of Dunwich are the hauntingly beautiful ruins of its 13th-century Franciscan friary, perched on the edge of a cliff, and the Leper Hospital chapel in the present churchyard. Today, the area is home to a tiny village of just 120 people, with a museum dedicated to the town’s fascinating history. Situated in a remote spot on Scotland’s rugged Isle of Skye, the ghostly ruins of this coastal village are a reminder of a brutal and heartbreaking part of Scottish history. Boreraig was cleared of its residents in the 1850s by wealthy landowners to make way for sheep, a brutal common practice throughout the region known as the Highland Clearances. Families were forced to leave their homes, with some tenants even burning the roofs of cottages to ensure the villagers wouldn’t come back. 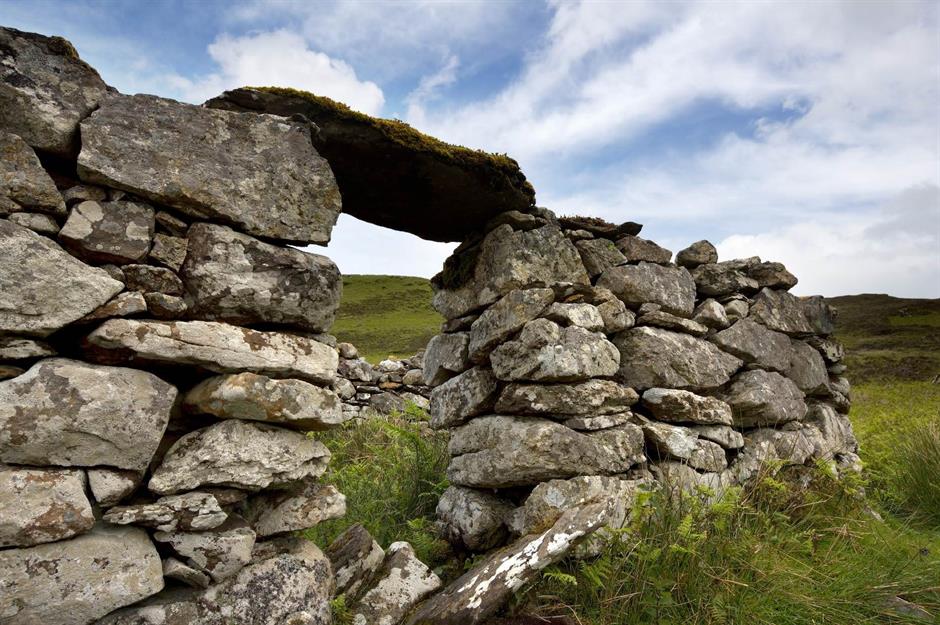 Fotimageon/Shutterstock
After the nearby farmland was abandoned in the early 20th century, all that is left of Boreraig are a few collapsed stone houses and buildings. Weathered and worn down, the village has depleted in an eerily beautiful way. Its derelict buildings form part of a popular hiking trail that offers walkers a window into the village’s past. Boreraig’s remains include a grass-topped church, a mix of stone houses, as well as piles of grey rock chipping from the old Marble Quarry. 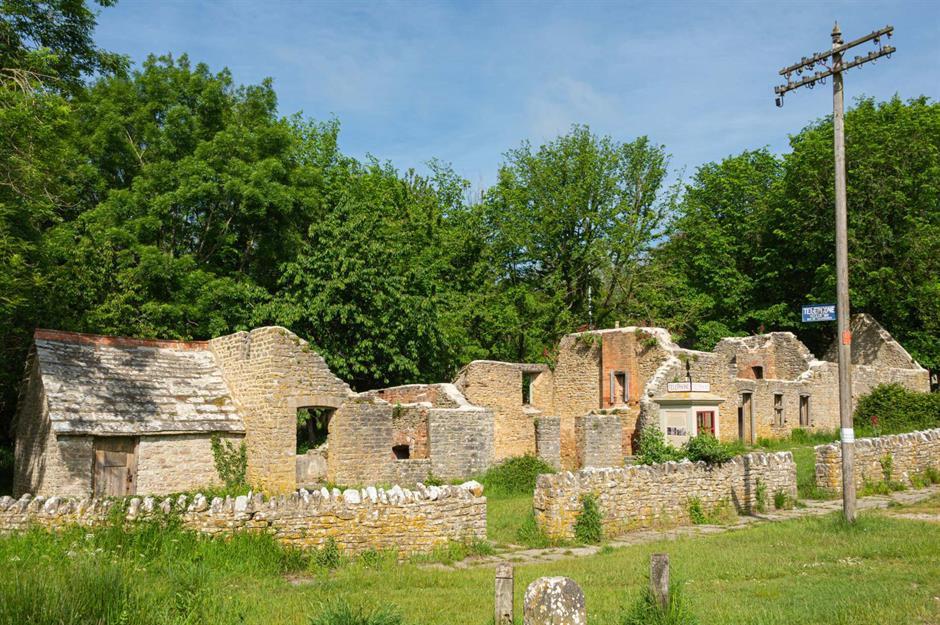 Often referred to as Dorset’s lost village, with its well-preserved houses and streets, Tyenham looks as if it was frozen in time. In December 1943, the charming pre-war village was taken over by the army for military training and its residents were forced to leave within 28 days. What was thought to be a temporary evacuation of Tyneham became permanent after a compulsory purchase order was made for the land to still be used by the army after the Second World War. The villagers were never allowed to return.

With its out-of-control plants, roofless stone cottages and everyday objects that have been left behind, the time capsule village has become a popular tourist attraction for avid ghost town fans. Although still used by the military, parts of Tyneham are now open to the public on most weekends and public holidays. Notable features from Tyneham’s decaying remains include an old phone box, the school building complete with still intact workbooks and the postcards all over the village detailing the stories of some of its former residents.

Discover the world’s most eerie abandoned towns and cities 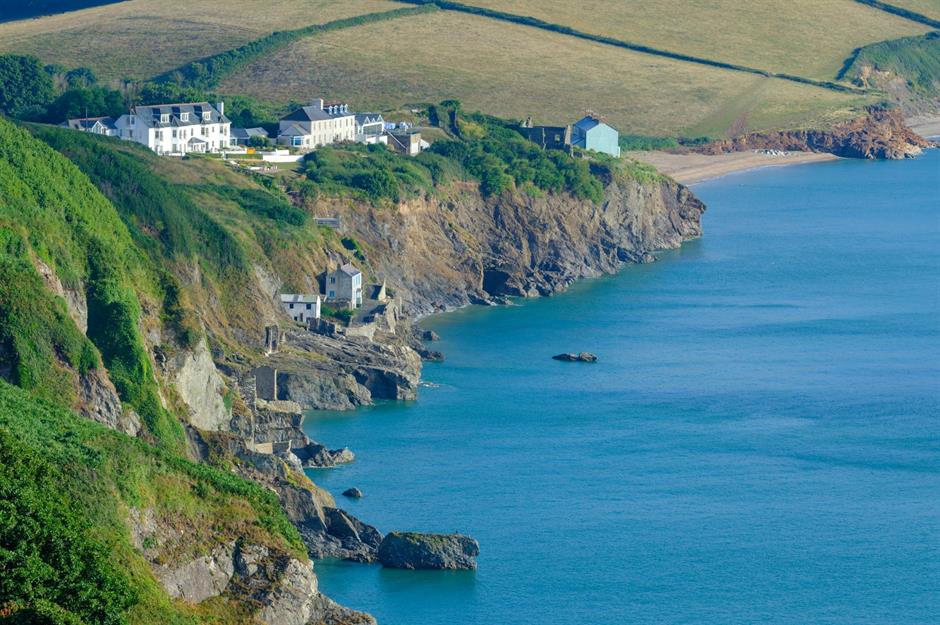 Julian Gazzard/Shutterstock
Ravaged by the elements, just a few crumbling ruins are what’s left of Hallsands, a small fishing village on the south Devon coast. Disaster struck the tiny village on 26 January 1917 when a brutal storm triggered extremely high tides and powerful winds to surge across the coastal ridge, flooding houses and buildings and submerging them in icy cold water. By midnight, four houses had gone and its inhabitants had packed their bags and fled to the nearby cliff tops. 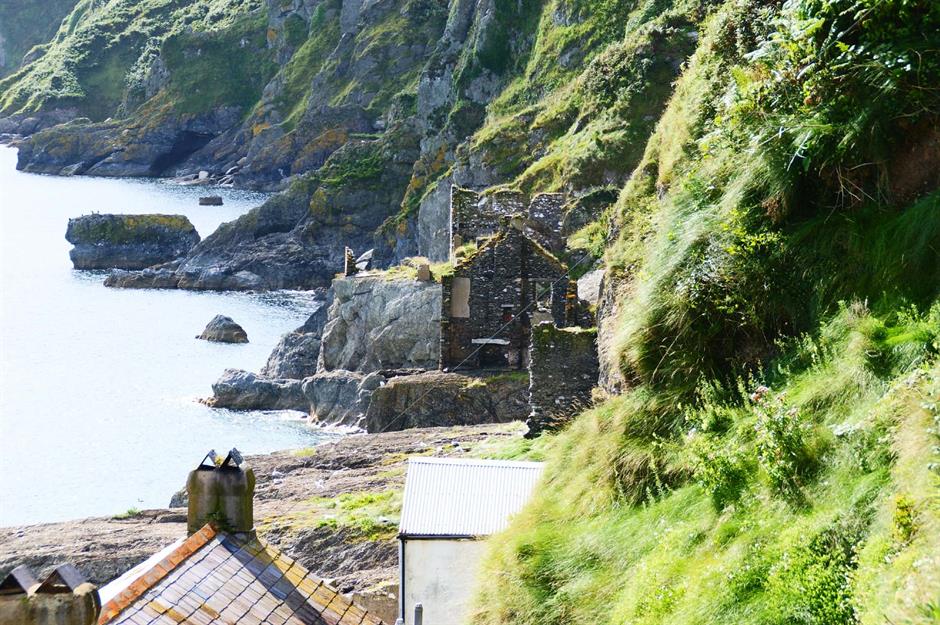 Around 29 houses had been destroyed in just 24 hours as well as the livelihoods and belongings of the entire village. The tragedy was thought to be caused by the removal of large amounts of shingle from the nearby coast to enlarge Plymouth Docks before the First World War, which was protecting Hallsands from the water. Today, parts of some houses and the old chapel have survived, a haunting testament to the power of the sea. Due to cliff erosion, Hallsands is too dangerous to visit but there is a viewing platform located above. 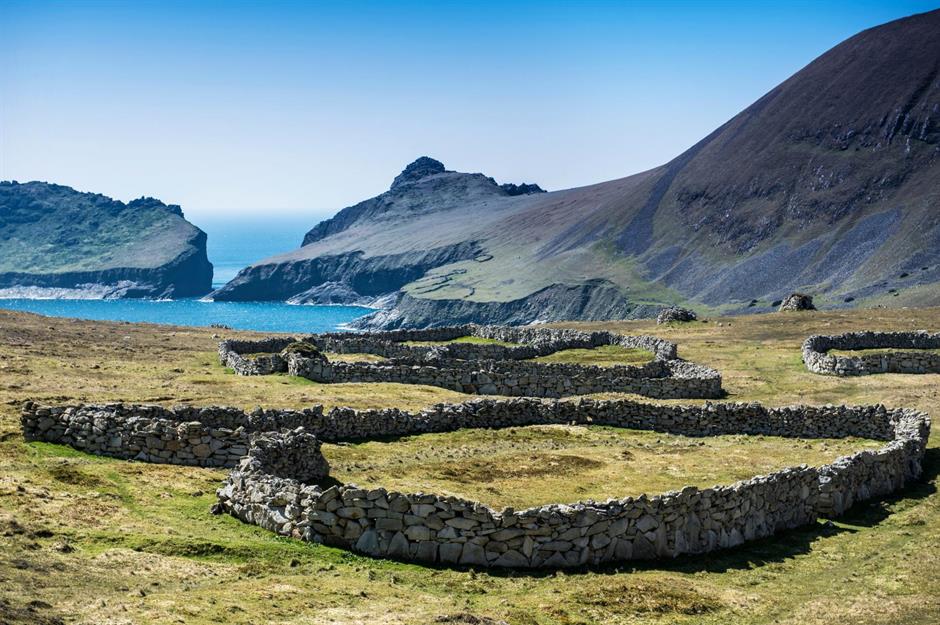 The most remote part of the British Isles, St Kilda is a volcanic archipelago lying off the western coast of Scotland’s Outer Hebrides. St Kilda consists of four rugged islands – Hirta, Soay, Borerary and Dun, Hirta being the largest. Around 4,000 to 5,000 years ago Hirta was first settled by humans who created a self-sufficient civilisation, which was the only settlement of the four islands. 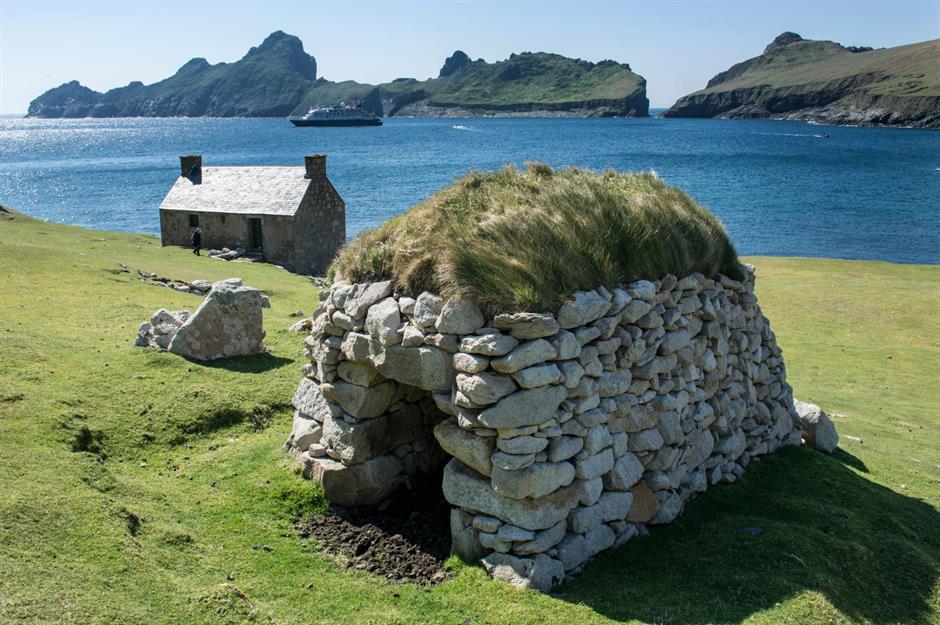 Due to the harsh weather, by the 1930s the last few inhabitants abandoned Hirta for mainland Scotland, leaving it deserted. Today, fragments of the relatively intact settlements can be found dotted across the island, offering a glimpse into the lives of the residents who lived there. The archipelago is now home to the largest colony of Atlantic puffins in the UK. With its unique natural and cultural properties, St Kilda became a dual UNESCO World Heritage Site in 1986, the only one in the UK with mixed World Heritage status. 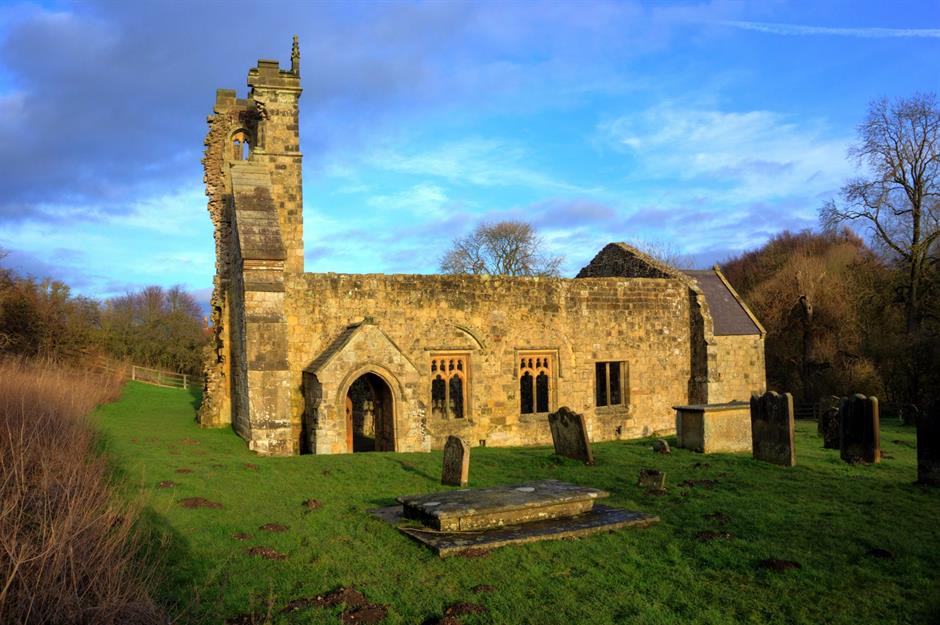 Thought to be one of the largest and best-preserved medieval villages in Britain, Wharram Percy sits on a remote valley in the Yorkshire Wolds. Possibly founded in the 9th or 10th century and recorded in the Domesday Book as ‘Warran’, the village flourished between the 12th and early 14th centuries and its name stems from the prominent noble family Percy who owned the area and lived there. Wharram Percy was continuously occupied for six centuries before it was deserted in 1500 after the last few families were evicted to make room for sheep pasture. 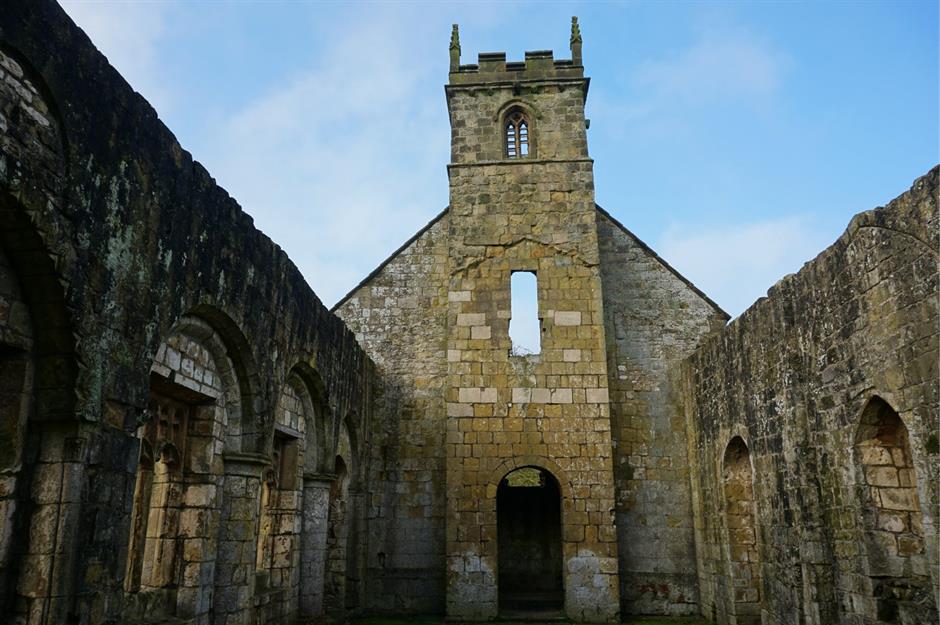 Today, the only medieval building left standing is the spooky ruined church. The grassed over foundations of two manor houses and around 40 peasant houses and their outbuildings are also slightly visible. Since 1948, Wharram Percy has been the focus of intense research which has earned it the title of the best-known deserted medieval village in Europe.

Nigel Jarvis/Shutterstock
Imber in Salisbury Plain is another eerie village whose fate was sealed by the arrival of the military. In 1943, the Military of Defence evacuated Imber’s small community, giving them just 47 days’ notice to find somewhere new to live, to make way for a training ground for American troops. After the army bought the village and the surrounding land, Salisbury Plain became the largest military training ground in the UK. 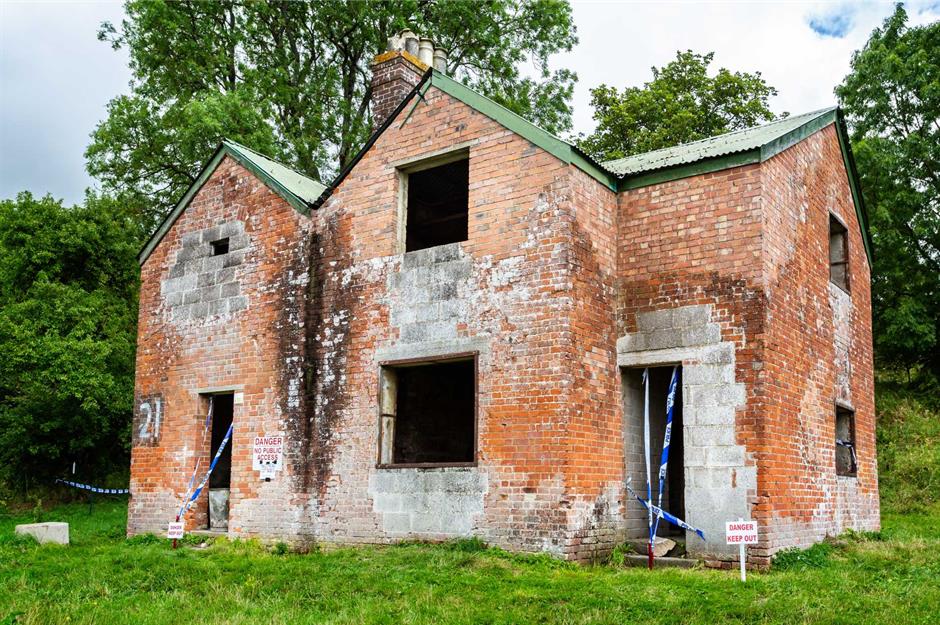 Nigel Jarvis/Shutterstock
Although thought to be short-term, after the war ended its residents were sadly unable to return and Imber was permanently taken over by the military. Today, the village is deserted, a shell of its former self, although its abandoned buildings are still used for training purposes. Due to the possibility of unexploded bombs going off, the military opens up only parts of Imber to the public for a few weeks each year.

Matthew Fry/Alamy Stock Photo
The weather-beaten stone houses of this former corn mill village in East Sussex can be traced back hundreds of years. Tide Mills was founded in the 1760s after the Duke of Newcastle permitted three West Sussex corn merchants to build a tidal mill and dam where a former course of the river Ouse met the sea and the village grew up around it. The mill operated for over 100 years until it finally closed in 1883, but the village lived on. 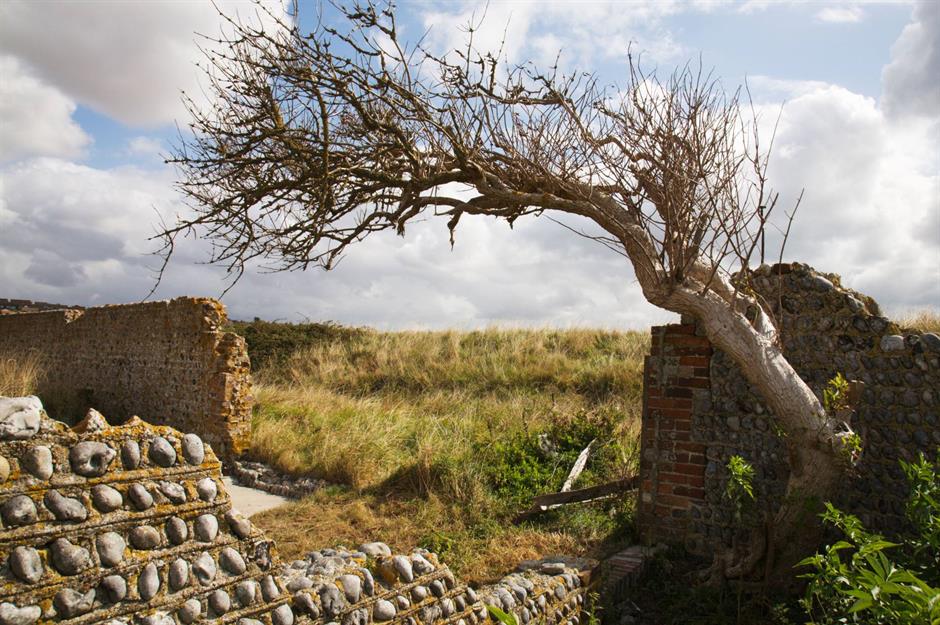 Due to poor living conditions, in 1937 Tide Mills was deemed unliveable and those who refused to leave were forcibly removed. By 1940 it was left empty. The majority of its buildings have since been demolished. Not much of the derelict village remains except a few crumbling foundations from houses, several flint walls and three well-preserved arches that were located underneath the mill. Nature has since reclaimed much of the area with plants crawling over stones, trees dominating old walls and birds nesting in nearby fields.

Check out these amazing ruins where Mother Nature ran riot 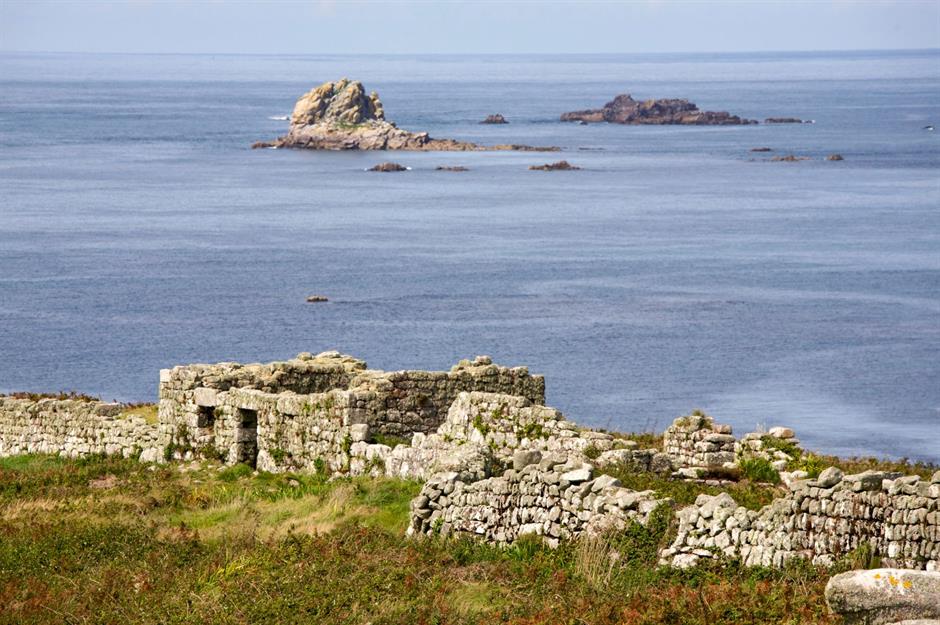 Rugged and remote, Samson is the largest uninhabited island in the Isles of Scilly. Steeped in history, the island takes its name from Saint Samson of Do, one of the founders of the Kingdom of Brittany, who visited the string of islands during the 6th century. Samson was inhabited by several farmers and fishermen up until 1855 when Augustus Smith, the Lord Proprietor of the islands decided to remove its small population, who were on the brink of starvation, and relocate them to other islands nearby. 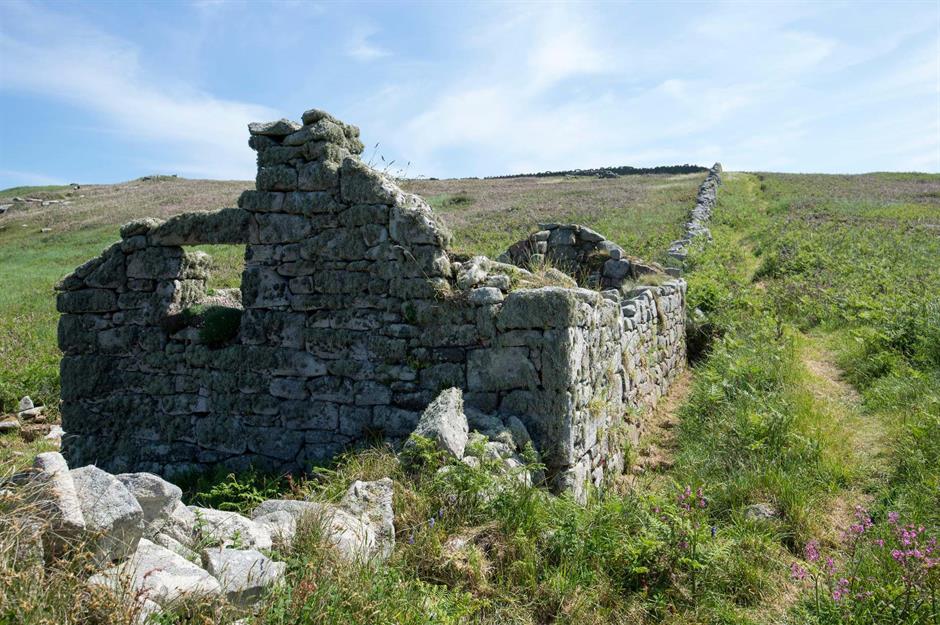 Today, Samson is home to more prehistoric sites per acre than any of the other islands. Numerous ruins cover the landscape including ancient burial grounds, roundhouses, 19th-century cottages and graves. Although now completely deserted, since 1971 alongside Green Island, Stony Island, Puffin Island and White Island, Samson has become a designated Site of Special Scientific Interest for its unique biological characteristics, particularly for the colonies of seabirds that now call it home. 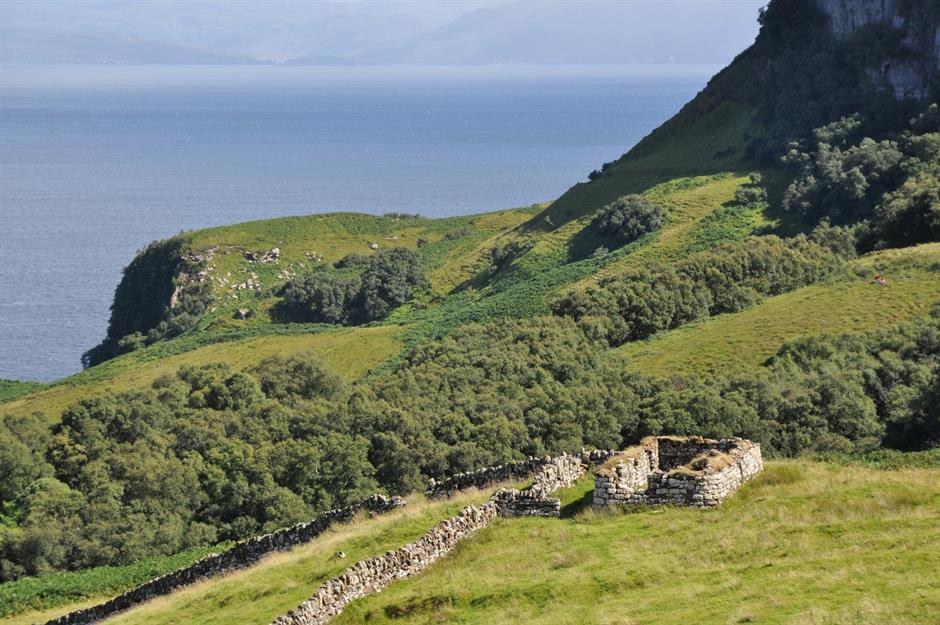 Sadness seems to hang in the air over the ragged ruins of Hallaig, another Scottish village that was a victim of the Highland Clearances. Perched on the Isle of Raasay, it was a vibrant and tight-knit community until the 1850s when the village was cleared and its population were forcibly removed so the area could be used for sheep farming. Hallaig sadly never recovered and its desolate remains are a reminder of the long-lasting effects of this brutal event. 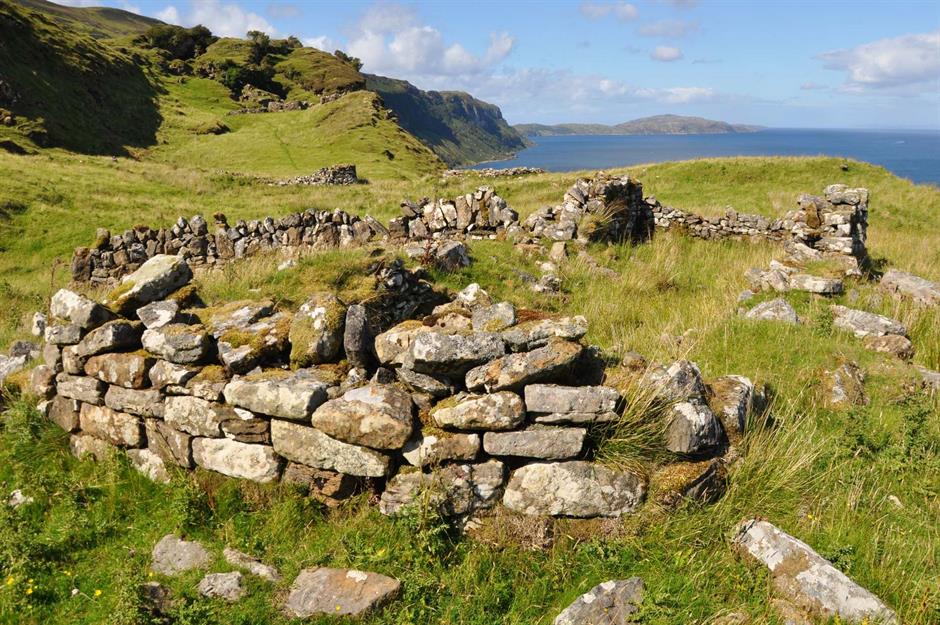 The deserted township rose to fame after Gaelic poet, Sorley MacLean, wrote Hallaig, a poem inspired by the abandoned village, as some of his relatives were affected. The poem became MacLean’s best-known work, and he is now considered one of the greatest Scottish poets of the 20th century. The haunting ruins stand as a harrowing symbol of the thousands of people living in the Scottish Highlands who were displaced during this turbulent period.

Rob Thorley/Shutterstock
Hidden away within a valley in Gwynedd is the remnants of this old mining village. At its peak during the 19th-century slate rush, Cwmorthin was home to several working-class families joining the farming community who had lived in the area years before. It is thought that a community of some kind had existed here as early as the 11th century 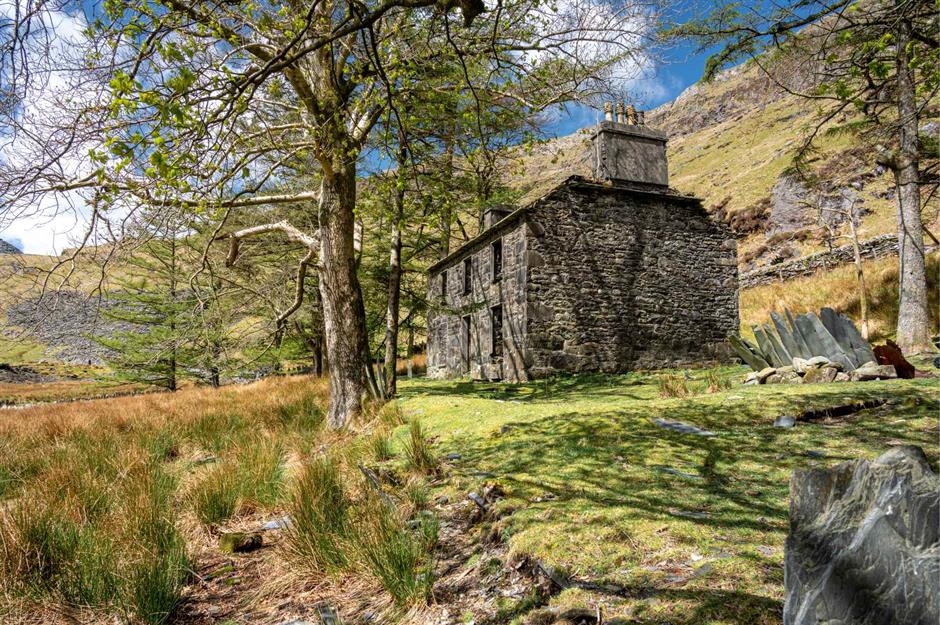 Following the decline of the slate industry, by the 1940s the Victorian town was abandoned. Since then, all that’s left of Cwmorthin are a few decrepit cottages, old quarry buildings and a farmhouse. Set against a beautiful valley backdrop overlooking a sparkling blue lake, the tranquil Cwmorthin is a mystical sight, popular with walkers.