The incredible story of the Mayflower: the ship that shaped America

The Mayflower: sailing back in time 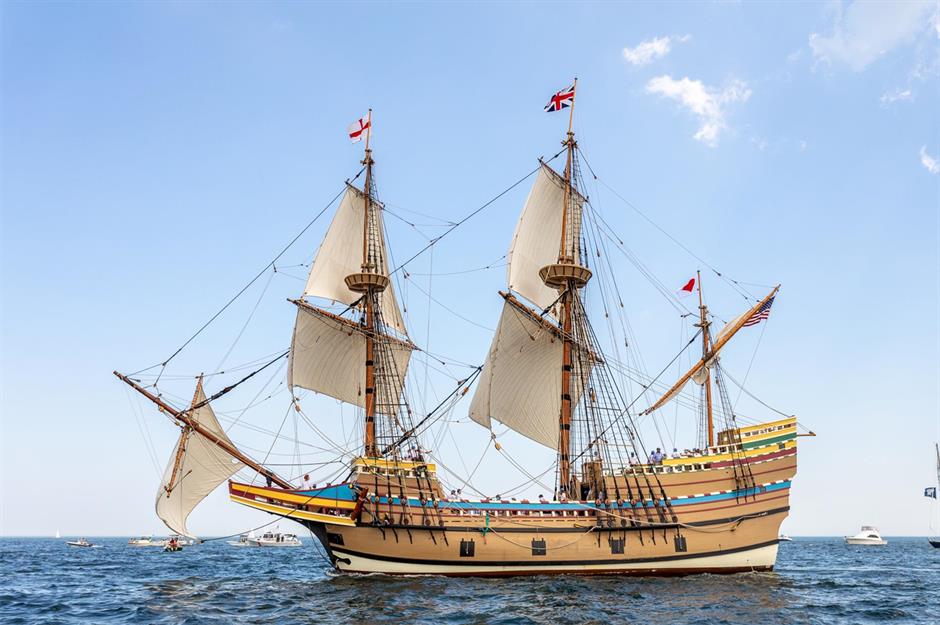 Plimoth Patuxet Museums
It’s been 400 years since the Pilgrims sailed the high seas on the iconic Mayflower and set up the first permanent European colony in what would become Plymouth, Massachusetts. But how much do you know about their story, the mighty ship they travelled on, and the Native Peoples who helped them establish their settlement? Here we chronicle the history of the voyage that would shape the course of American history.

Before the Mayflower: who were the pilgrims? 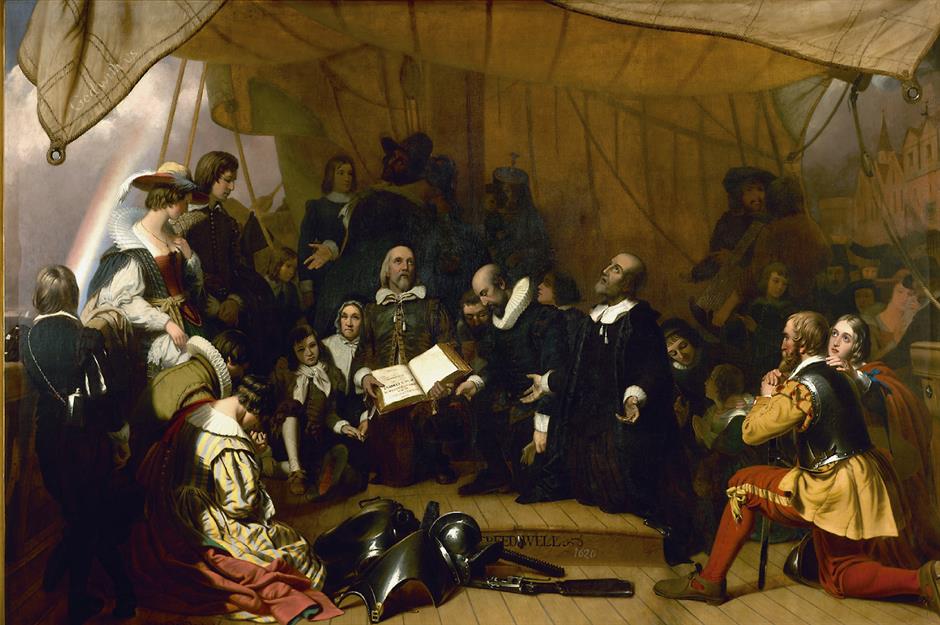 Robert W. Weir/Wikimedia Commons/CC0
The story of the Mayflower begins back in the 17th century with the Pilgrims – or the Saints, as they were known then. This was a band of Protestant Separatists (many from Scrooby, Nottinghamshire, UK) who were disillusioned with the state of the Church of England at this time. This stalwart religious group wished to disentangle themselves from the institution’s supposed corruption and begin their own, novel church elsewhere. And so, their journey began.

Before the Mayflower: a foray onto the Continent

At first, the pilgrims’ sights weren’t set on America at all. Instead, they made their way to the Netherlands (illustrated here), which they trusted would be the perfect place to set up their novel church. Life here wasn’t exactly what they’d hoped for, though. The Pilgrims struggled to find decent work and the country’s free-living ethos proved a hindrance to their sacred mission – some young Pilgrims were dizzy with their new-found freedom, eschewing the Saints in favour of a new, exciting life on their own.

Before the Mayflower: plans for a New World 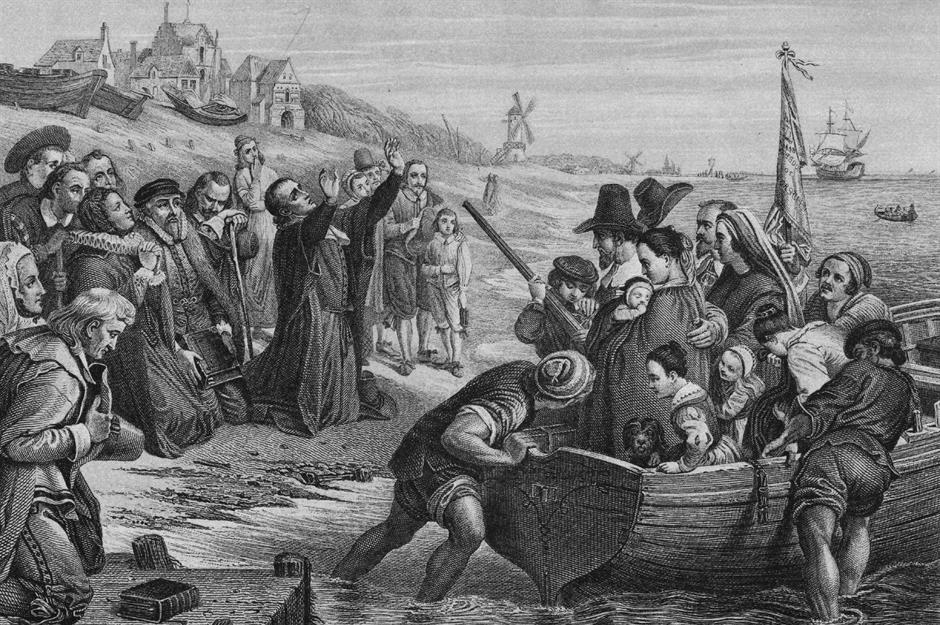 Archive Photos/Getty Images
Disillusioned once more, the Pilgrims decided to make a break from the Netherlands too. But this time they cast their eye much farther afield – to a New World across the Atlantic, where they could start afresh and worship freely. This artwork captures them leaving Delfshaven in Rotterdam for England: when back on British soil they’d prepare for a departure to new, foreign shores once more.

Before the Mayflower: plans for a New World 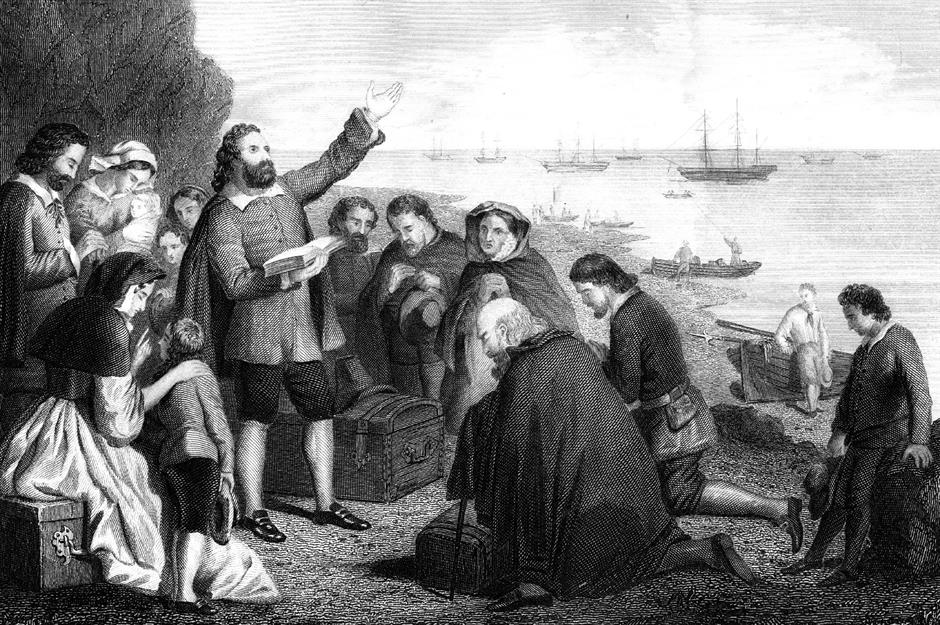 The Print Collector/Print Collector/Getty Images
The Pilgrims received funding for their mission from wealthy London merchants and were permitted by the booming Virginia Company to land in Virginia and establish a colony. The path seemed set for the Pilgrims, but the journey to the New World wasn’t going to be a smooth one.

Setting out: the Mayflower and the Speedwell 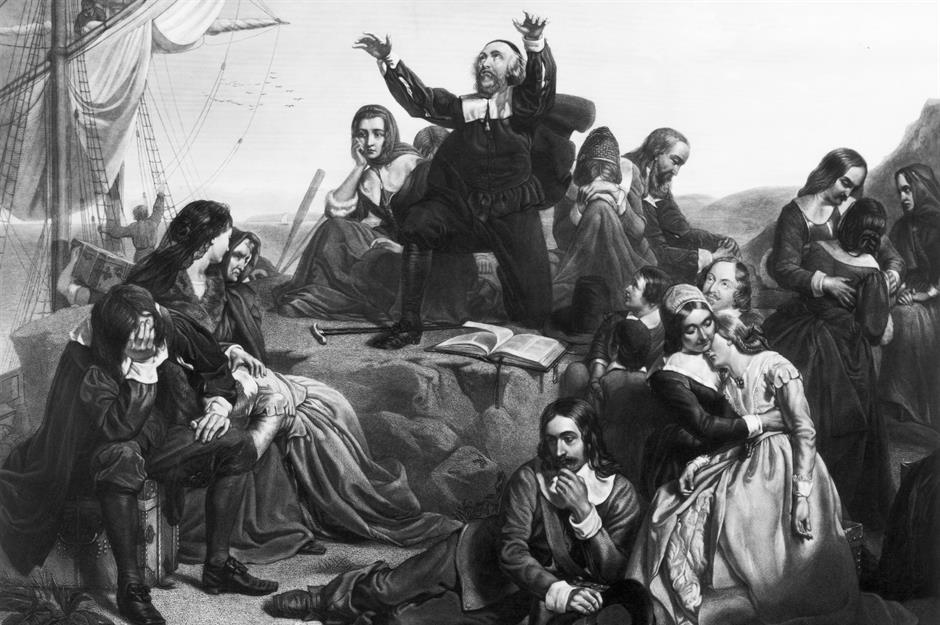 Bettmann/Getty Images
At the start, there were two ships. The lesser-known Speedwell would carry the Pilgrims from the Netherlands to Southampton, where it would convoy with the famous Mayflower. This illustration shows the religious group aboard the Speedwell, hearing an address from John Robinson, the Pilgrims' minister.

Setting out: a false start 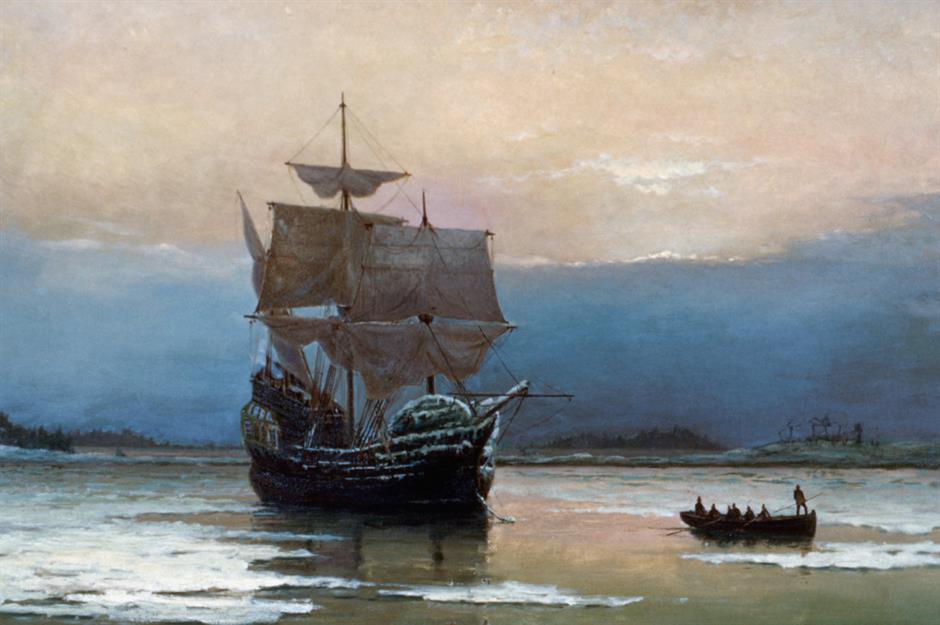 Barney Burstein/Getty Images
In August 1620, the Mayflower and the Speedwell ships finally set out from Southampton – but this initial journey was short lived. Soon after the ships embarked on their voyage, the Speedwell sprang a leak and both vessels were forced to turn around and head to the port at Plymouth. It was this turn of fate that would cement the Mayflower’s place in history. The famous ship is depicted here at sea.

The Mayflower to the rescue 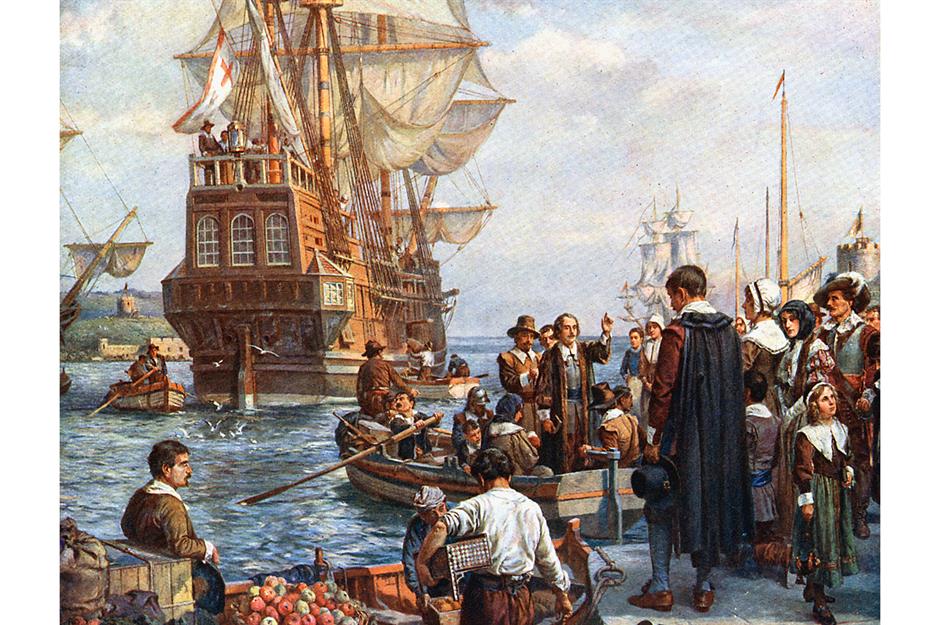 Ann Ronan Pictures/Print Collector/Getty Images)
Eventually it was decided that the mighty Mayflower should go it alone. By this point, some travellers, having already spent weeks waiting or at sea, had abandoned the idea. Still, some 102 hardy passengers (including the Pilgrims) and 30 crew members packed themselves aboard the ship, which was actually intended for cargo. And so the historic Mayflower voyage began. 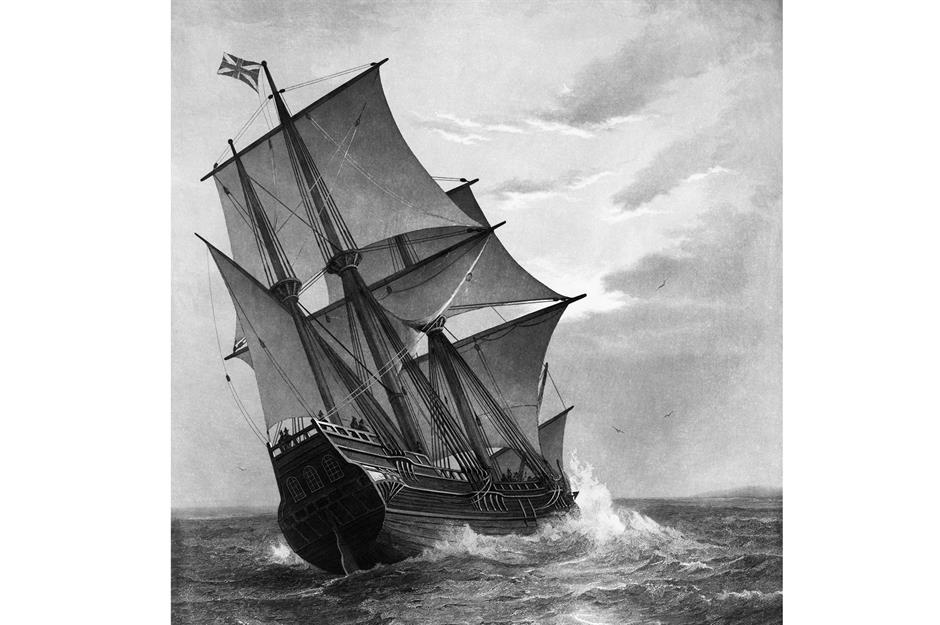 Bettmann/Getty Images
Despite the vessel’s fame, surprisingly few details about the Mayflower are known for certain. Varying estimates place the ship between 80 and 90-feet (24–27m) long and it’s thought that it could carry about 180 tonnes of cargo. What’s known for sure is that it was a merchant ship intended for goods, not people, and it had most likely had a previous life carrying wine and other products. This meant that the Pilgrims were in for a most uncomfortable ride.

Life on board the Mayflower 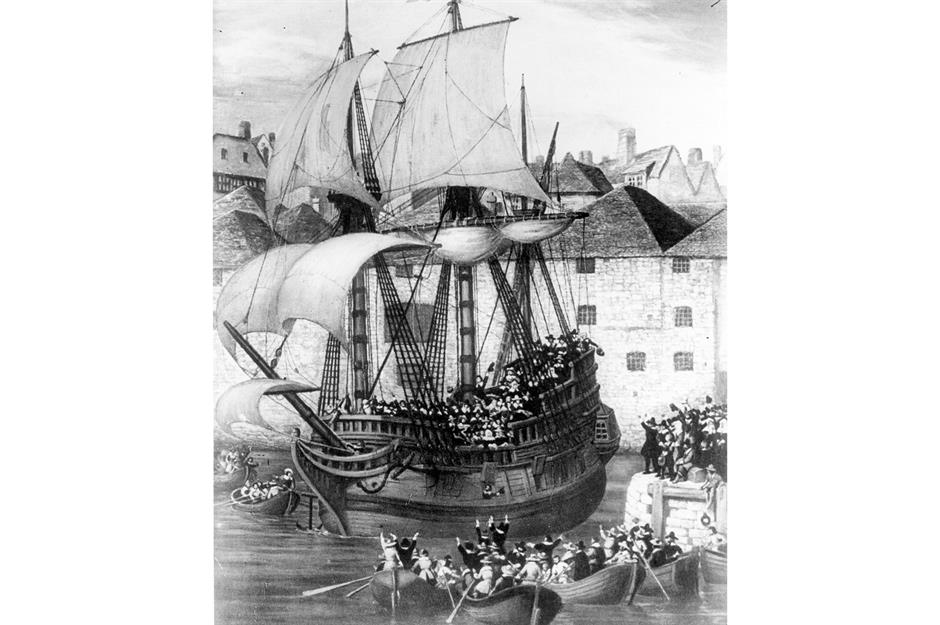 Hulton Archive/Getty Images
The Mayflower eventually left the port of Plymouth in September (as captured in this drawing). The ship was captained by Christopher Jones (who likely resided in its stern), while the passengers – including key figures like Separatist leader William Brewster – would have made do with the cramped, chilly conditions of the cargo deck.

Life on board the Mayflower 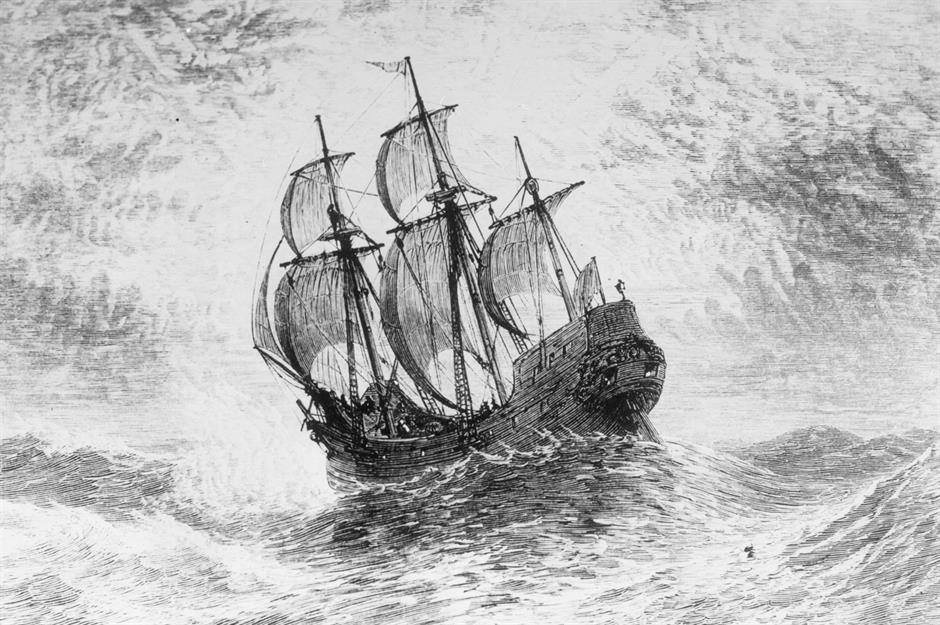 Three Lions/Stringer/Getty Images
Life on board the Mayflower would have been anything but shipshape. Given the delays that the Pilgrims suffered, the Mayflower struck out during the stormy season, meaning rough waters, biting conditions and plenty of seasickness among both the passengers and the crew. One young passenger was swept right overboard, though he miraculously survived. Another – a sailor – perished during the journey.

The first glimpses of land 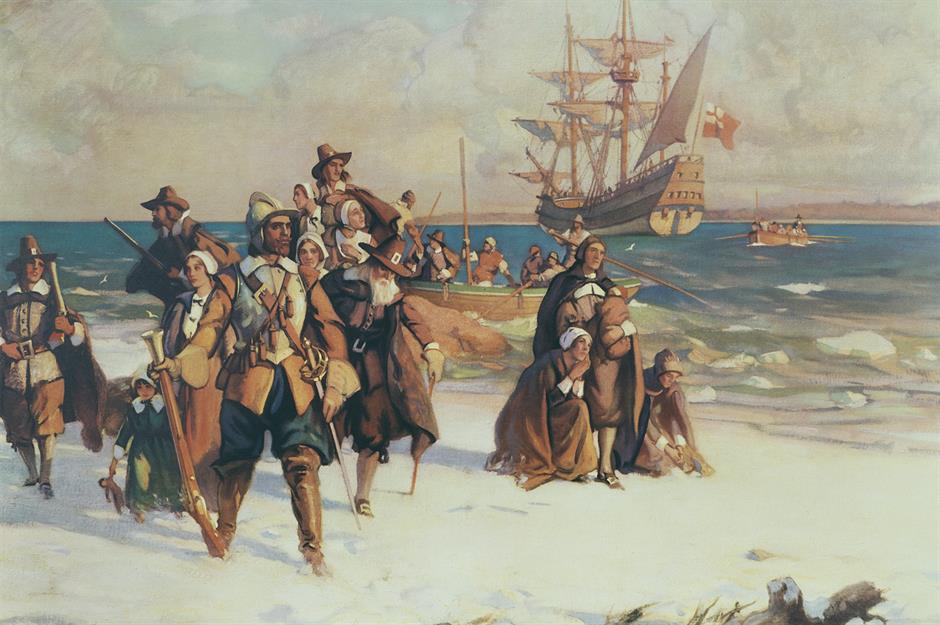 The Mayflower braved the storms for 66 days and eventually arrived in the Americas, first glimpsing Cape Cod on 9 November 1620 and anchoring a few days later. The Pilgrims were significantly farther north than they intended to be and were well beyond the land that the Virginia Colony had allocated them. However, given their treacherous journey, the travellers decided to stop here to explore anyway, docking in what is modern-day Provincetown Harbor. Discover more about America's most important landmarks here too. 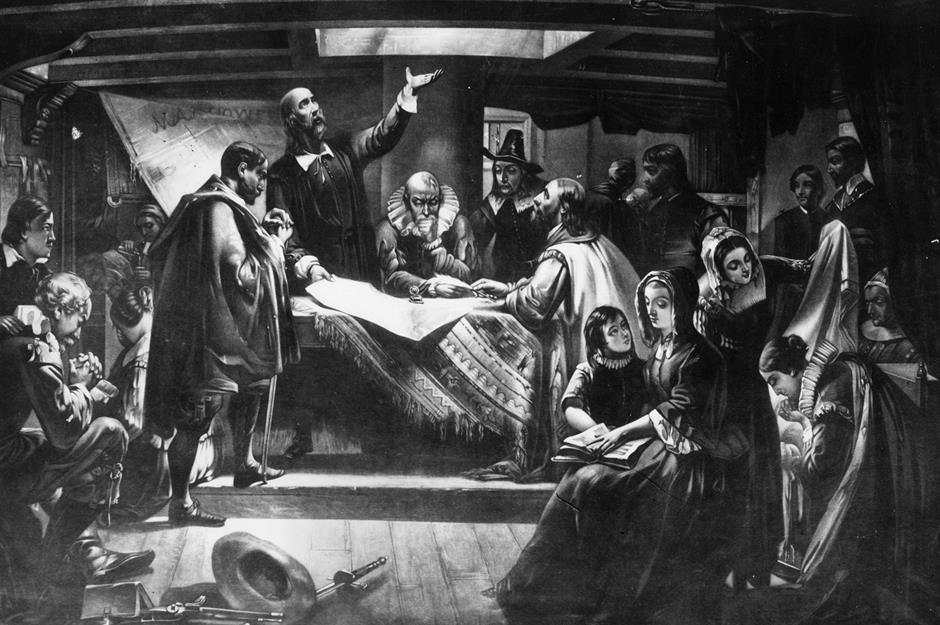 Rischgitz/Getty Images
Given their mistaken landing, the Pilgrims decided to draw up a kind of contract, or “compact”, in an attempt to legitimise their colony, before they embarked on their explorations on land. The document was intended to promote democracy and the rule of law, and also aligned the colonists with the English King, James I. It was called the Mayflower Compact. 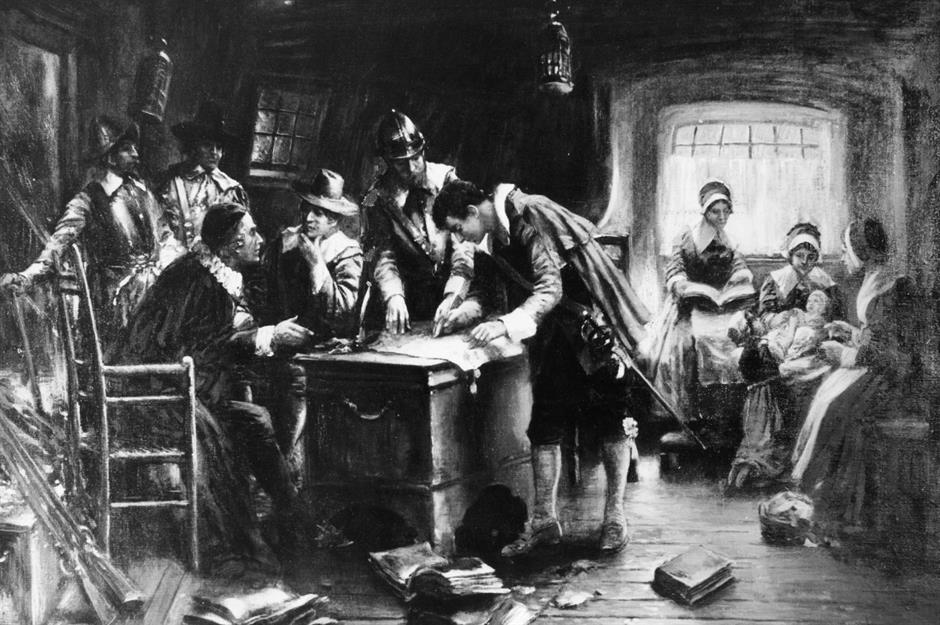 The Mayflower Compact was signed by 41 men, as depicted here, who stated their intentions "to plant the first colony in the Northerne parts of Virginia" for "the glory of God, and advancement of the Christian faith". The Pilgrims also promised to act under "civill body politick, for our better ordering and preservation". Once the document was signed, the colonists began to explore the land they'd arrived upon.

Beyond the Mayflower: the colonial impact 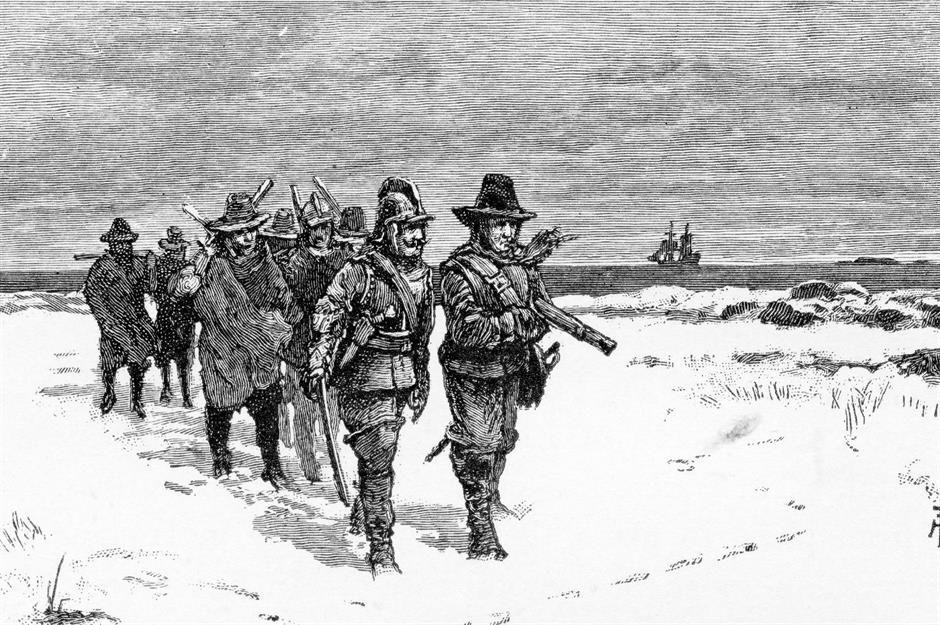 Interim Archives/Getty Images
The land here was inhabited by the Wampanoag People, who had observed the Pilgrims as they marched onto the shores. Numbers of the Wampanoag People and other Native communities here had already been decimated: not only had some had been enslaved by previous colonists who had since moved on, but the indigenous population was at risk from alien diseases brought from Europe too. This devastating period before the Mayflower’s arrival, between about 1616 and 1619, was known as the “Great Dying”.

Beyond the Mayflower: the village of Patuxet 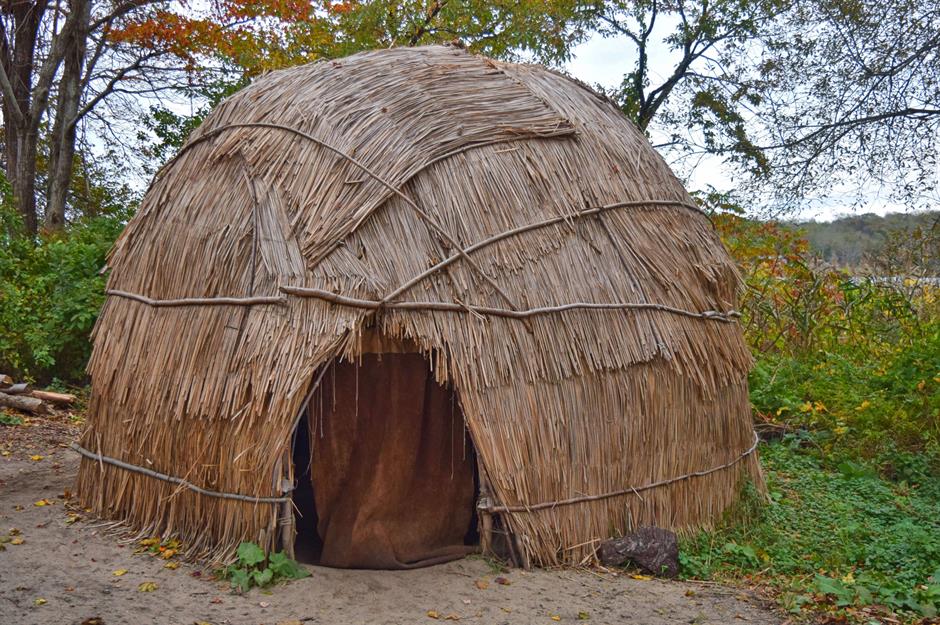 Michael Sean OLeary/Shutterstock
The Wampanoag People had also suffered attacks from other tribes and were still vulnerable. As such, as the Pilgrims began to explore the area north of where they’d landed, they came across abandoned villages instead of thriving Native communities. One of these was Patuxet, the abandoned Native village that ultimately became the precursor to the Plymouth colony. A traditional Wampanoag home is pictured here at Plymouth.

Beyond the Mayflower: the beginnings of the colony 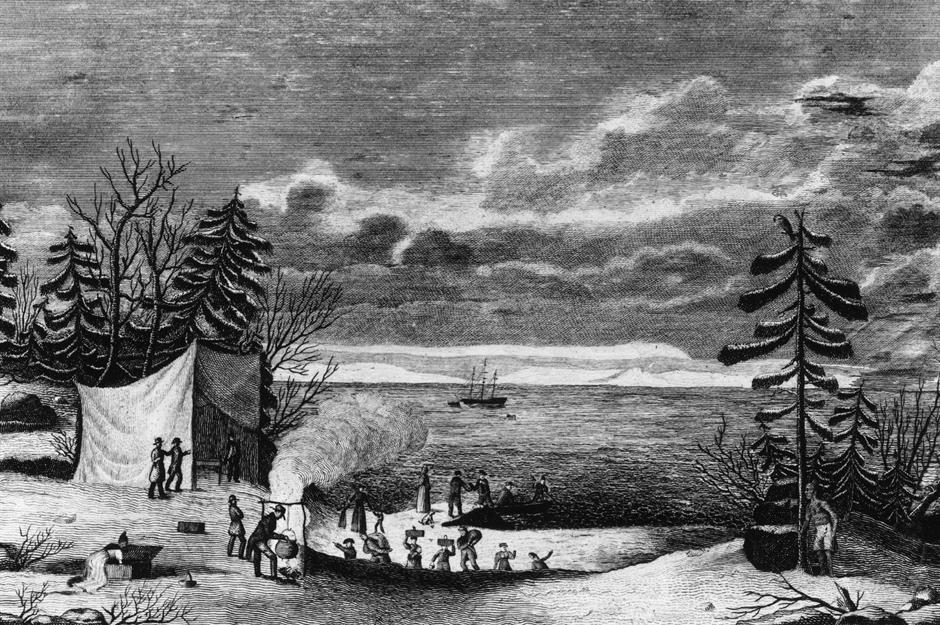 MPI/Getty Images
The Pilgrims had arrived in the clutches of winter and, as they began to build up their settlement, conditions were harsh. The Mayflower came to the rescue again: the Pilgrims kept their home on the ship, constructing houses and working on the colony by day, and sheltering on the vessel by night. Still, though, it wasn’t enough: only about half the passengers and crew survived the winter.

Beyond the Mayflower: help from Native Peoples 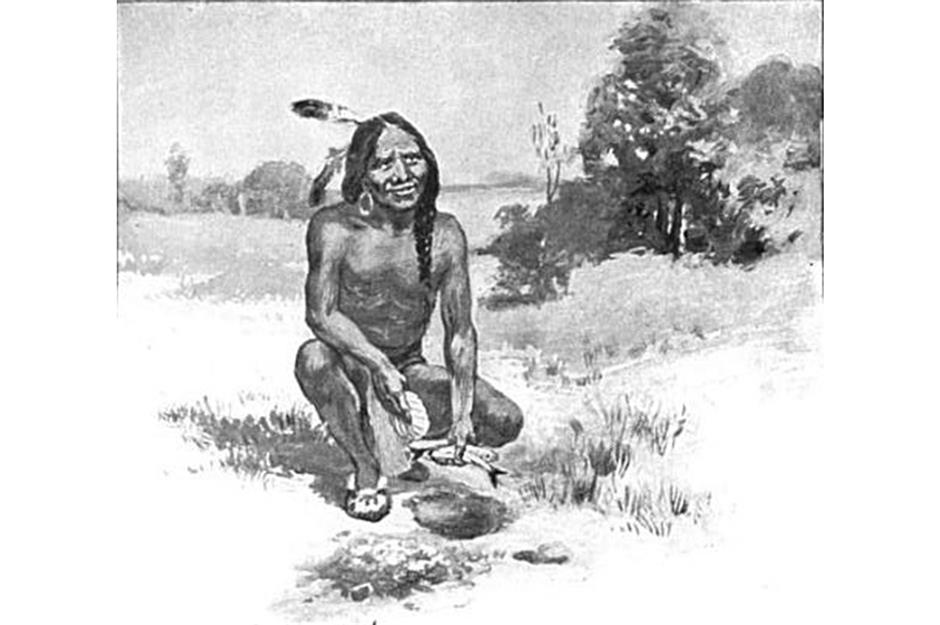 The German Kali Works, New York - Bricker, Garland Armor/Wikimedia Commons/CC0
It's likely that even more Pilgrims would have met their death if it wasn’t for the aid offered by the indigenous peoples here. Most notably, Samoset of the Abenaki tribe and Tisquantum (pictured here, also known as Squanto) of the Patuxet tribe, taught the colonists to fish, hunt and grow corn, all of which was vital for their survival. Tragically, Squanto passed away during an expedition on Cape Cod with governor William Bradford.

Beyond the Mayflower: the first Thanksgiving 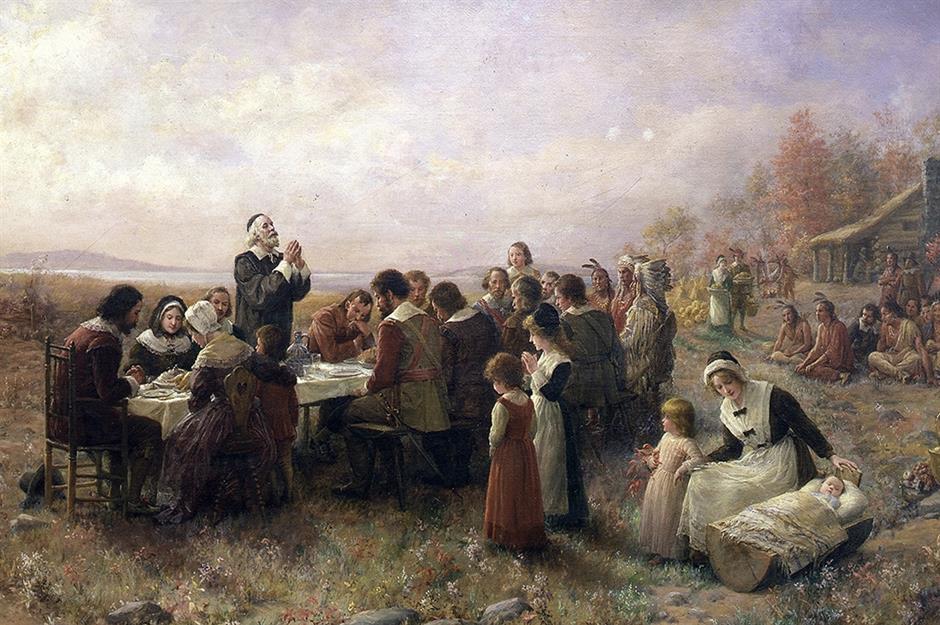 Jennie Augusta Brownscombe/Wikimedia Commons/CC0
The Pilgrims’ home from home – the Mayflower – finally left North American shores in April of 1621. And thanks to help from the Native Peoples, the Pilgrims celebrated a bountiful harvest that year and had a huge feast that’s widely considered to be the very first Thanksgiving. The colonists and the Native Peoples are said to have sat down and broken bread together during this symbolic meal.

After the Mayflower: what happened next? 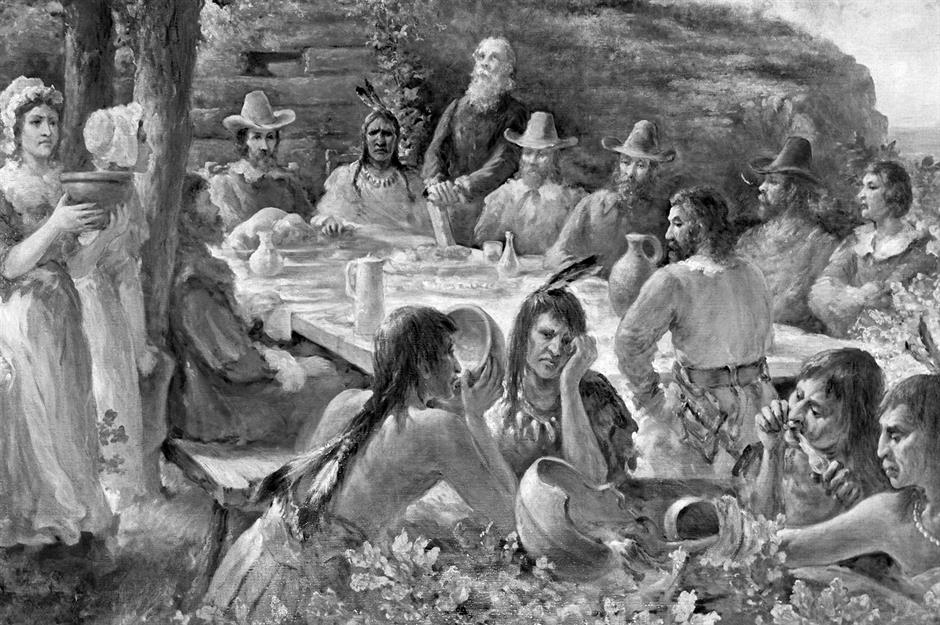 Sadly, this surprising picture of peace wasn't to last. After the Plymouth settlement's success, more English colonists began to travel to American shores, including a large group forming the Massachusetts Bay Colony under Governor John Winthrop in 1630. They eventually outnumbered the indigenous peoples here and also brought with them yet more diseases, including deadly smallpox. Tensions brewed, reaching a pinnacle with the devastating King Philip’s War in 1675. By the 1690s, Plymouth had been folded into Massachusetts.

What happened to the Mayflower? 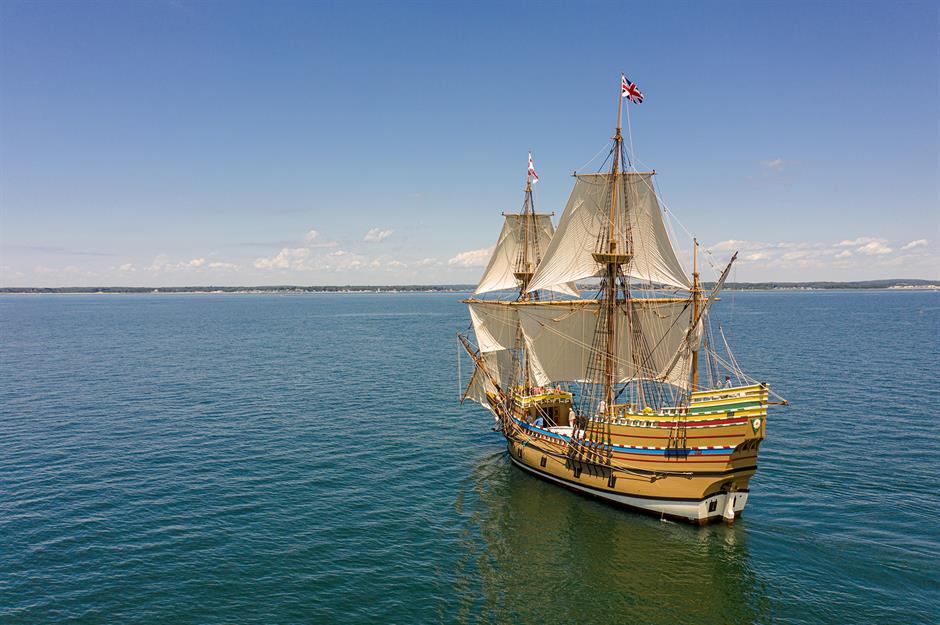 Plimoth Patuxet Museums
It's not known for sure what happened to The Mayflower, but experts say it was probably just scrapped and used for timber – some say it was specifically used to build a barn in the village of Jordans, Buckinghamshire, UK, but there's no proof that story is true. While we can't be certain of the original Mayflower's fate, an impressive replica ship – Mayflower II, pictured – has been built as a tribute. 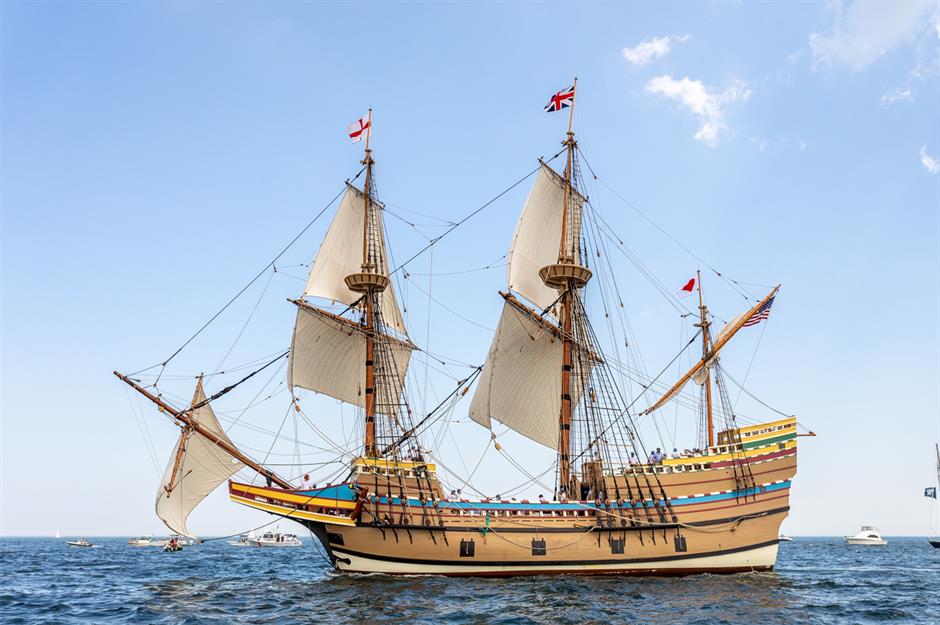 Mayflower II was constructed in Devon, England in the mid-1950s and embarked on its own mammoth voyage from southwest England to Plymouth, Massachusetts in 1957. This cross-Atlantic trip would take the Mayflower's replica 53 days to complete, beating its predecessor by just over a week. After an extensive renovation away in Connecticut, she took to the seas again this year to sail back to her Plymouth home, marking the 400th anniversary of the ship's original voyage.

Mayflower II and the Plimoth Plantation 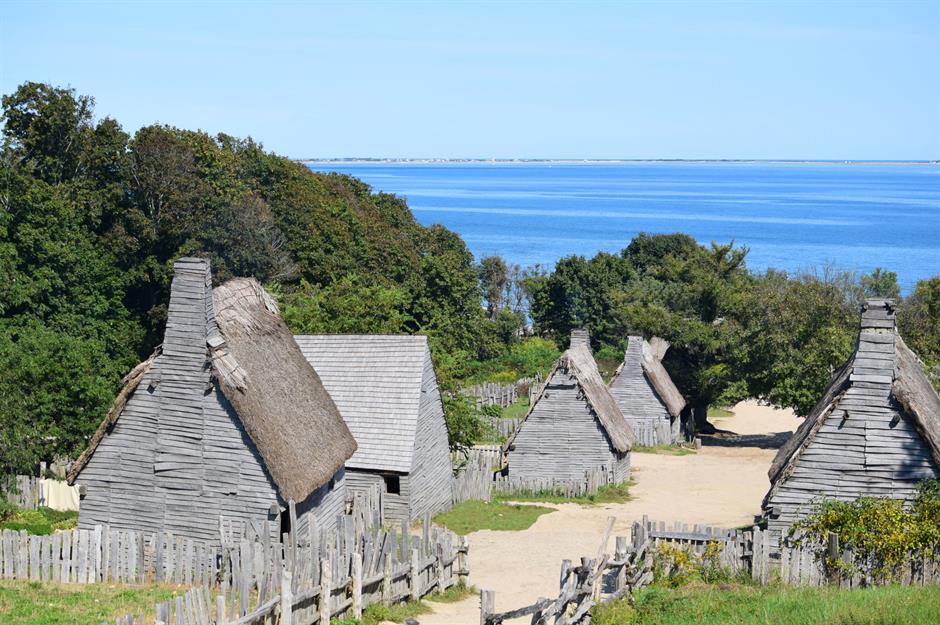 Today Mayflower II is moored at Pilgrim Memorial State Park, and tickets to the Plimoth Plantation (pictured, currently open with COVID-19 protocols in place) grant visitors access to the vessel itself, plus a recreated 17th-century English Village and Wampanoag Homesite. Though, due to COVID-19, changes have been made to the year's wide programme of events celebrating the Mayflower's 400th anniversary, you can find the latest updates here.

Discover other historic ships you can visit